The HP ZBook Power G8 is part of the newly refreshed its ZBook line, an entry-level mobile workstation with a 15.6” display. Though the base models are certainly one of the more affordable laptops of the ZBook family, the Power G8 still has the potential to deliver some pretty good performance with some fairly extensive security features if users choose to open up their wallets.

The HP ZBook Power G8 is part of the newly refreshed its ZBook line, an entry-level mobile workstation with a 15.6” display. Though the base models are certainly one of the more affordable laptops of the ZBook family, the Power G8 still has the potential to deliver some pretty good performance with some fairly extensive security features if users choose to open up their wallets.

Adam previously wrote a detailed overview of the HP ZBook Power G8 a few months ago; however,  because it was a pre-production unit (and not the consumer release with a final component build), it took more of a hands-on approach rather than a full-blown review with benchmarking. But now that we got our hands on an actual review model, we can now further discuss the mobile workstation and put it through our gauntlet of tests to see what it is capable of. 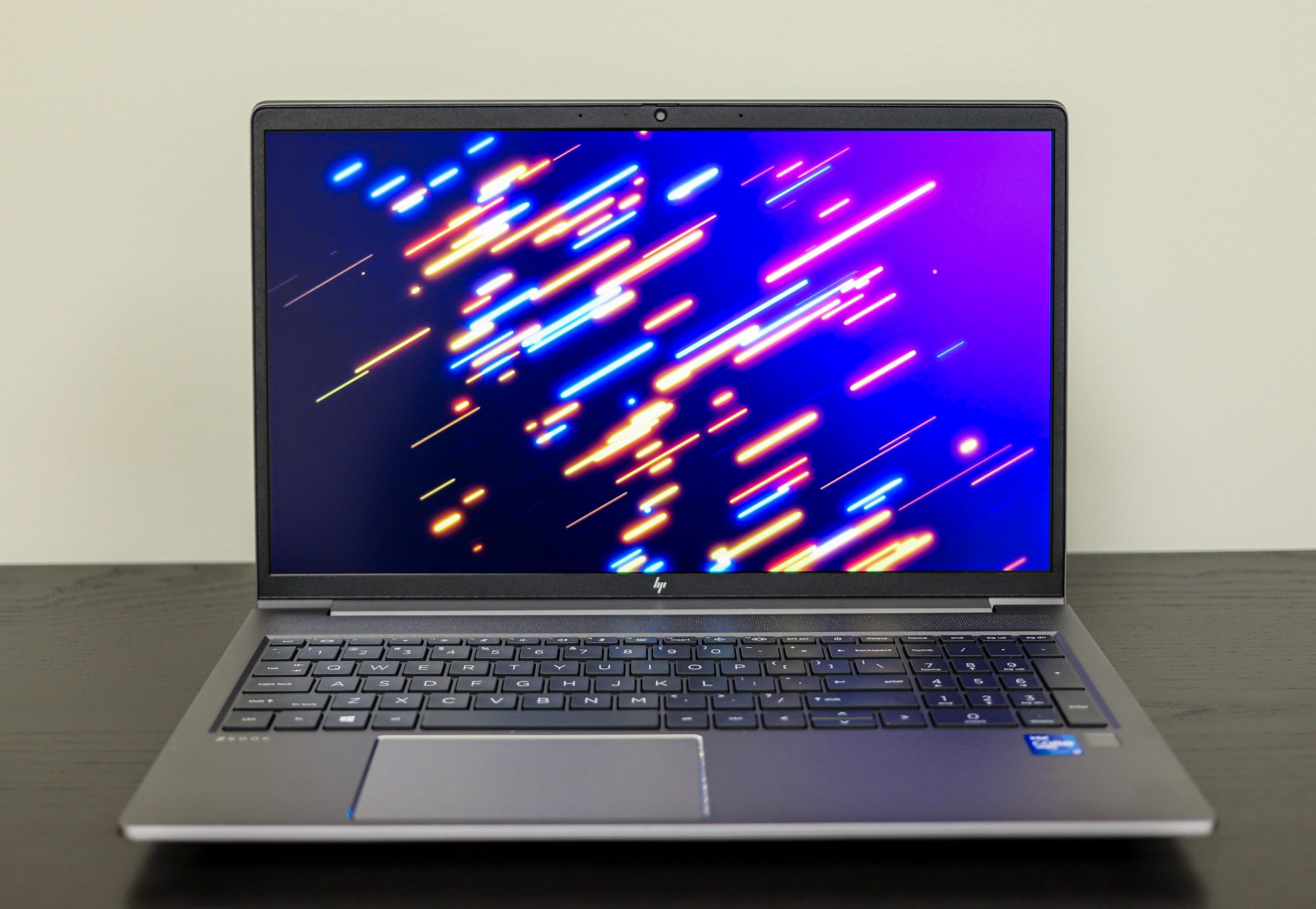 Looking at its hardware, the HP ZBook Power G8 gives users a pretty extensive choice of components, including 11th gen Intel Core i5, i7, or i9 CPUs, with the high-end configuration reaching an Intel Core i9-11950H vPro processor (which features 2.6 GHz to 5.0 GHz, Turbo Boost, 24 MB cache, and 8 cores). Paired with this is the choice of 8GB to 64GB 3200MTs RAM, as well as up to an NVIDIA RTX A2000, the latter of which can only be added if the user chooses a higher-end CPU. To lower the overall cost, users also have the option of more entry-level NVIDIA cards like the T600 or T1200, or onboard Intel UHD graphics, for those who don’t need the extra GPU power. 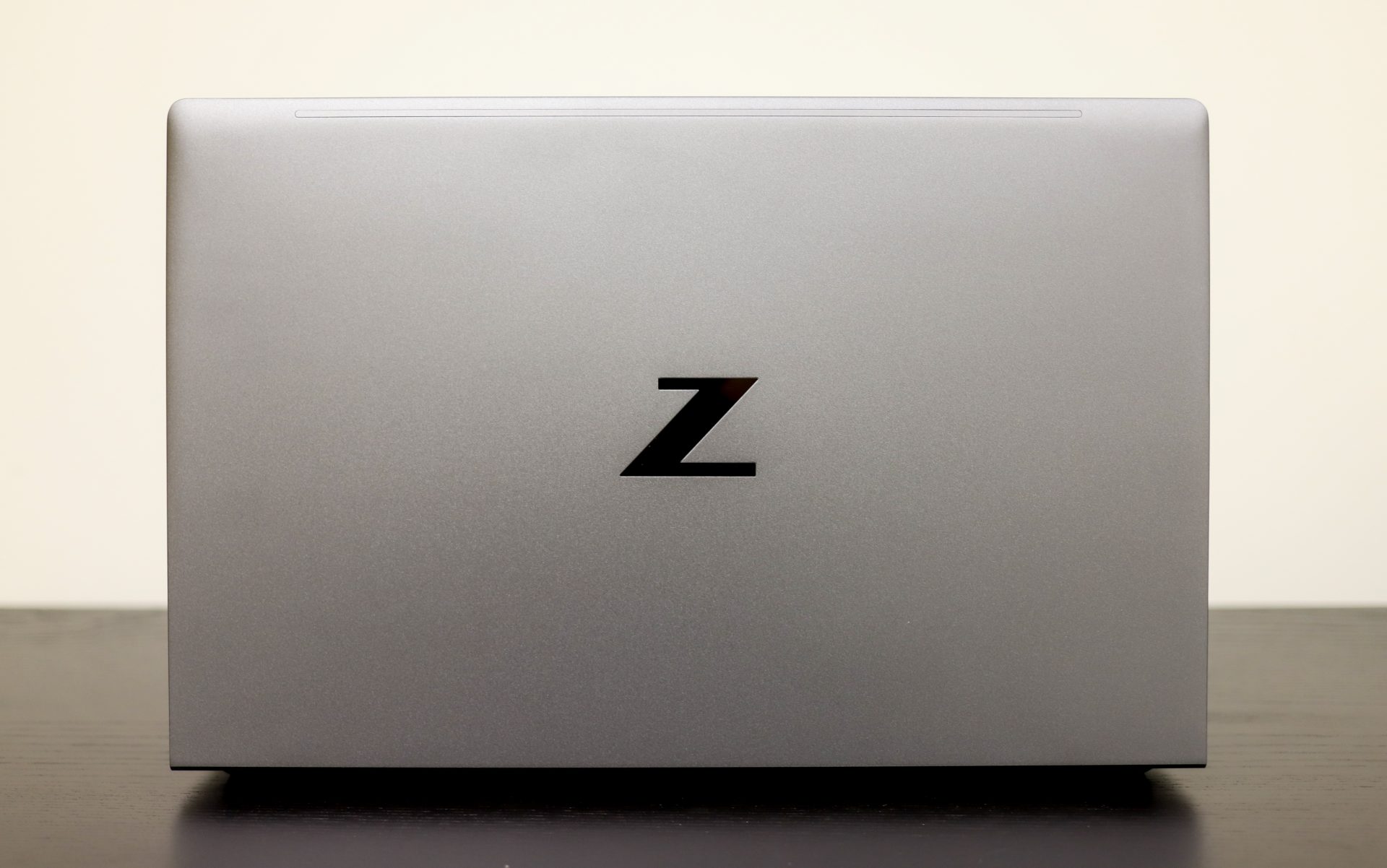 For storage, the ZBook Power G8 can be equipped with a 256GB NVMe SSD all the way up to a 2TB drive that features the new PCIe Gen4 interface (TLC NAND). Users can also add another drive to their build (up to a 2TB NVMe SSD) if they need the extra storage. It goes without saying, but adding more RAM and configuring the Power G8 with a high-end SSD, CPU, and graphics card options will quickly move the mobile workstation into the mid-range class price zone. 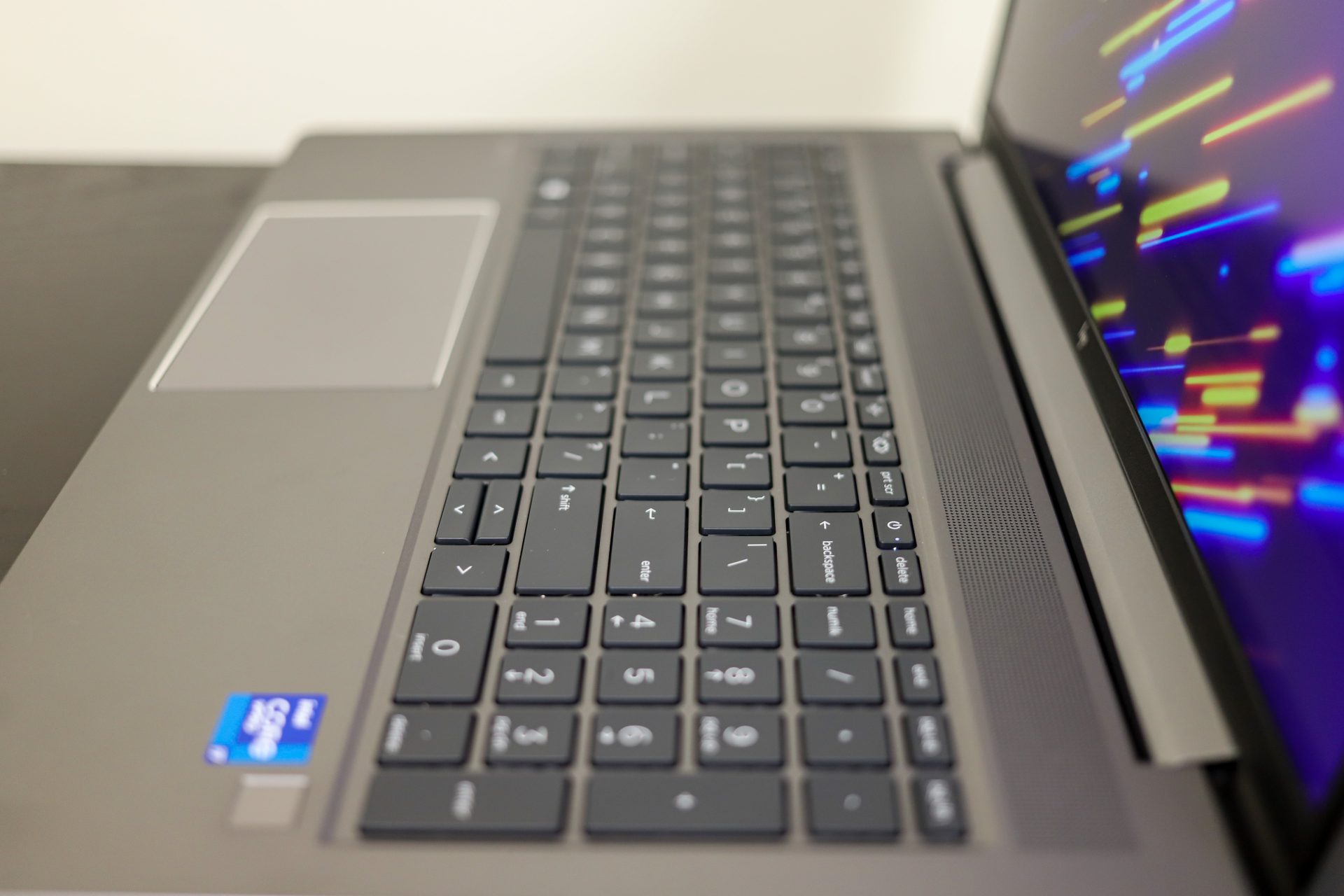 Because remote working has become the new way of life for many, the HP ZCentral Remote Boost software is more important than ever. This comes bundled with the Power G8 like all models from the Z line. Tom wrote an extensive overview as to how it works and what to expect, so we encourage you to check it out if you’re working from home for the long term or working in collaborative environments.

Power G8 is also focused on security, which is paramount for businesses with a remote workforce. It’s much harder to create and manage a secure network of workstations off-site, so having peace of mind that employees are working with a protected system is very important.

As such, HP has added a range of security features to all of their newly released ZBooks like the Power G8. One of the more notable enhancements includes a new tamper lock–an intrusion detection mechanism, which features sensors (located underneath the workstation) that notify users if it has been removed from the chassis and altered. Users will be able to configure what happens if anything suspicious is detected, including displaying an alert, locking the BIOS or the TPM, or completely locking down or powering off the system.

HP ZBook Power G8 features a high-quality, all-aluminum chassis and is MIL-STD certified. That said, dents and scuffs will definitely show up if dropped or banged around, so be careful. Overall, though, it’s a nice-looking, durable mobile workstation, though it’s worth mentioning that it’s a bit heavier than the ZBook Firefly.

Looking on the left side of the laptop reveals the collapsible network port, a SuperSpeed USB Type-A (5Gbps) port, an optional Smart Card Reader, an HDMI 2.0 port, and a nano security lock slot. 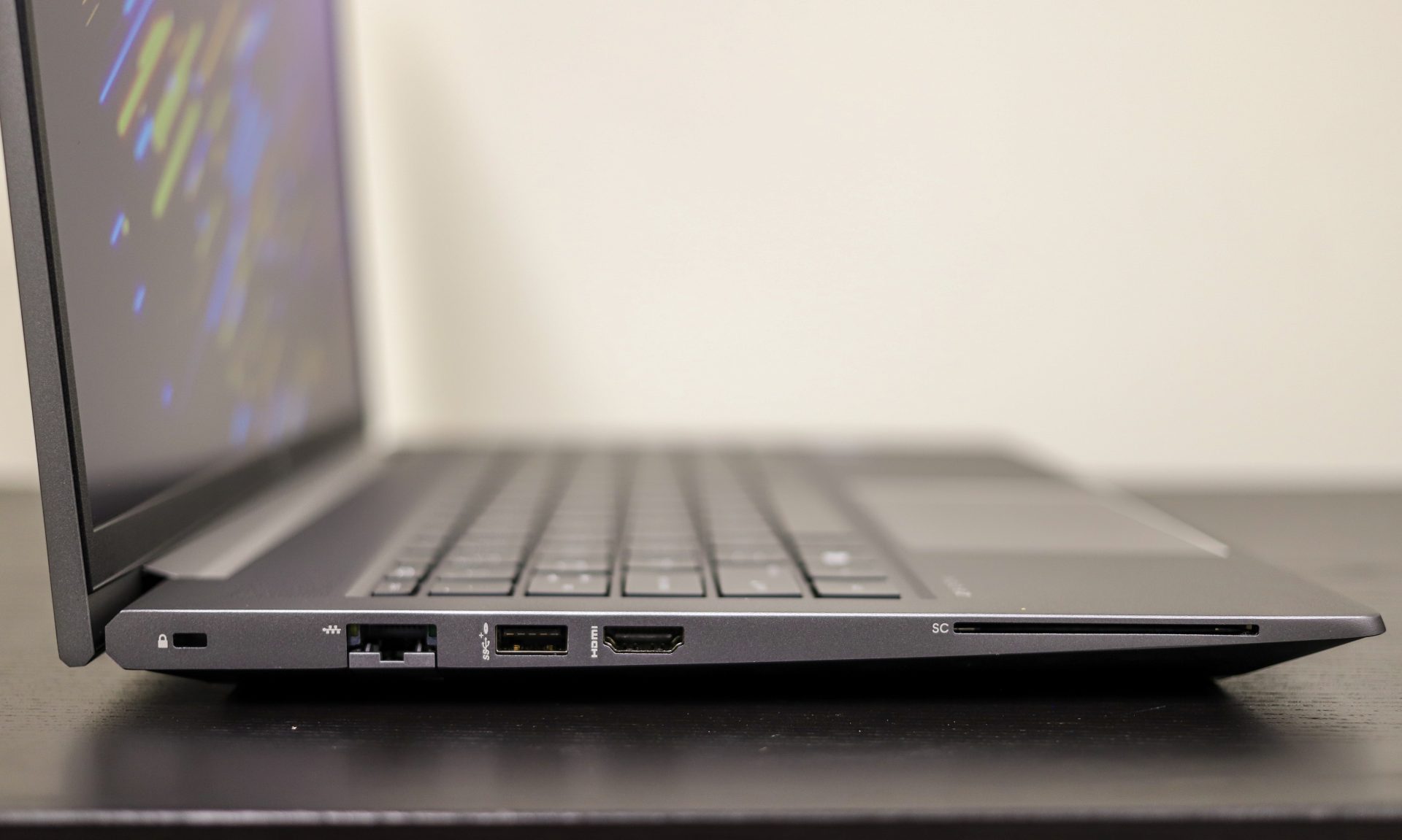 Turning it around to the right side, there is a power port, an audio/microphone combo port, a Thunderbolt 4 (USB4 Type-C 40Gbps), and two SuperSpeed USB Type-A ports (5Gbps), one of which is for charging. 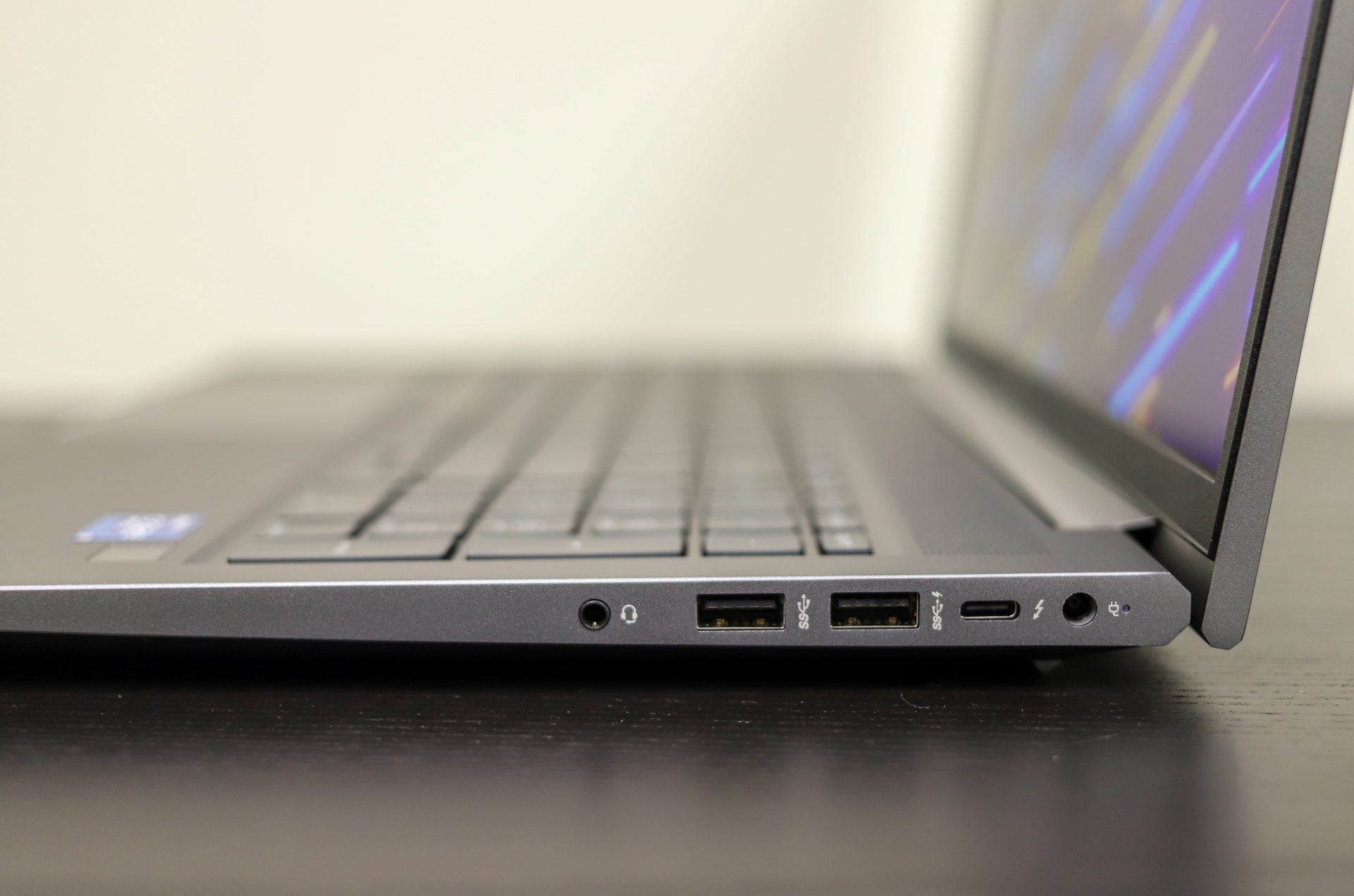 One of the features we liked most about the ZBook is its full keyboard, which certainly can be a huge benefit for many. It also comes with a fingerprint reader in the bottom right, which costs just a little extra ($10) for those who need the additional security. A little to the left and below the keyboard is a large trackpad, which works well for most people (though some might find their wrist touching it now and then). 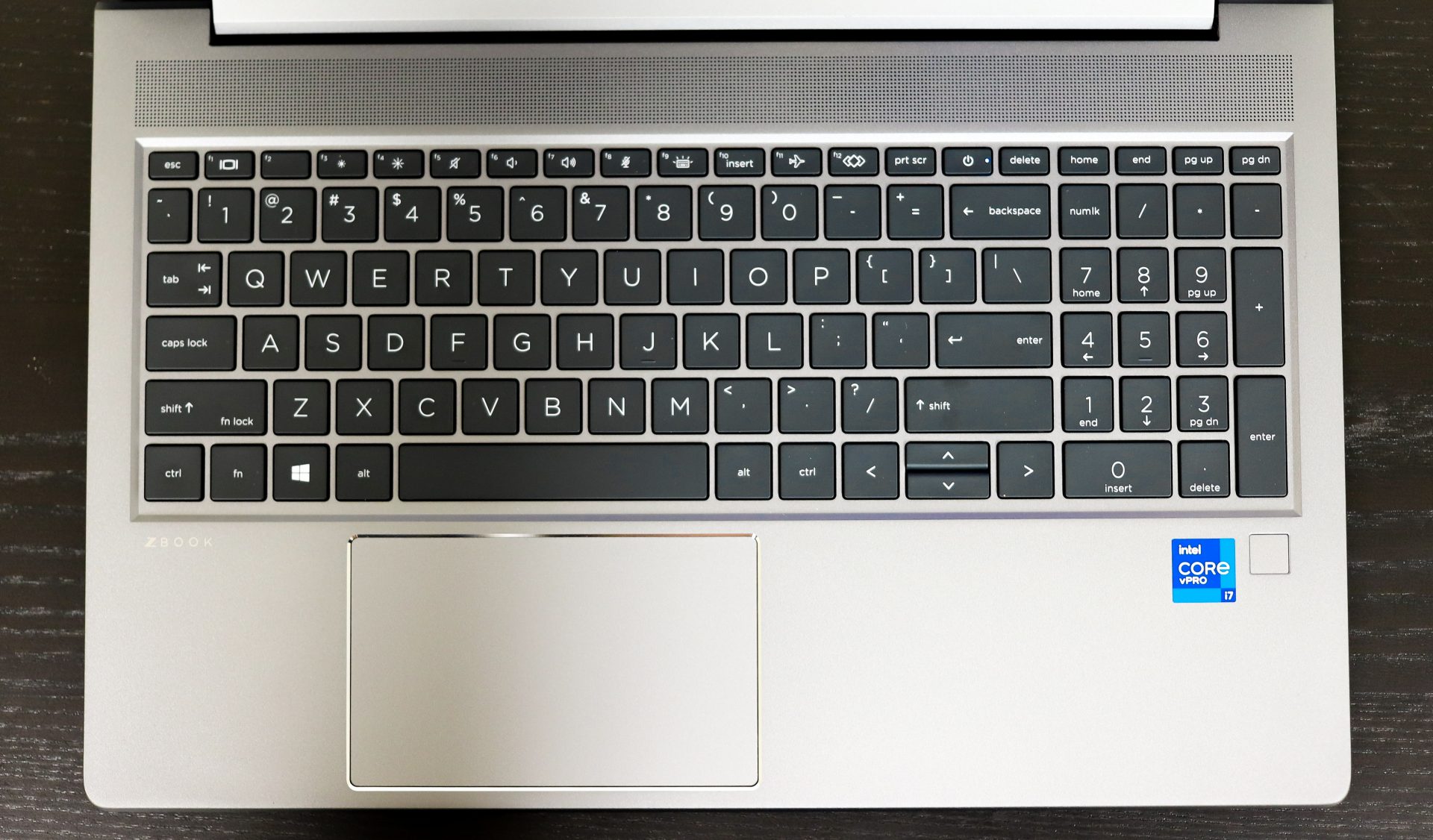 Our review model is outfitted with the NVIDIA RTX A2000. This is a newer-generation professional graphics card, sitting somewhere in the lower-to-middle part of NVIDIA’s laptop GPU offerings. It features 2,560 CUDA processing cores, 20 RT cores, 4GB of GPU memory, and 192GB/s peak memory bandwidth.

To gauge the performance of the Power G8, we put it through a series of resource-intensive tests using the following build:

We will be comparing it to our recently reviewed ZBook Firefly G8, which was launched alongside the Power and features an Intel Core i7-1185G7 processor, NVIDIA T500 graphics (4GB GDDR6), 32GB DDR4-3200 memory, and a 512GB NVMe SSD.

Our first test is PCMark10, a system benchmark for Windows PCs with a focus on modern office tasks. It offers a variety of workloads categorized into three groups.

Here, the ZBook Power G8 showed good results for its class with an overall score of 6,255, comprising 9,820 in essentials, 8,967 in productivity, and 7,544 in digital content. Like most laptops of this class, the latter score was brought down by the video editing/rendering section due to the FPS limitations of the 4GB NVIDIA GPU. 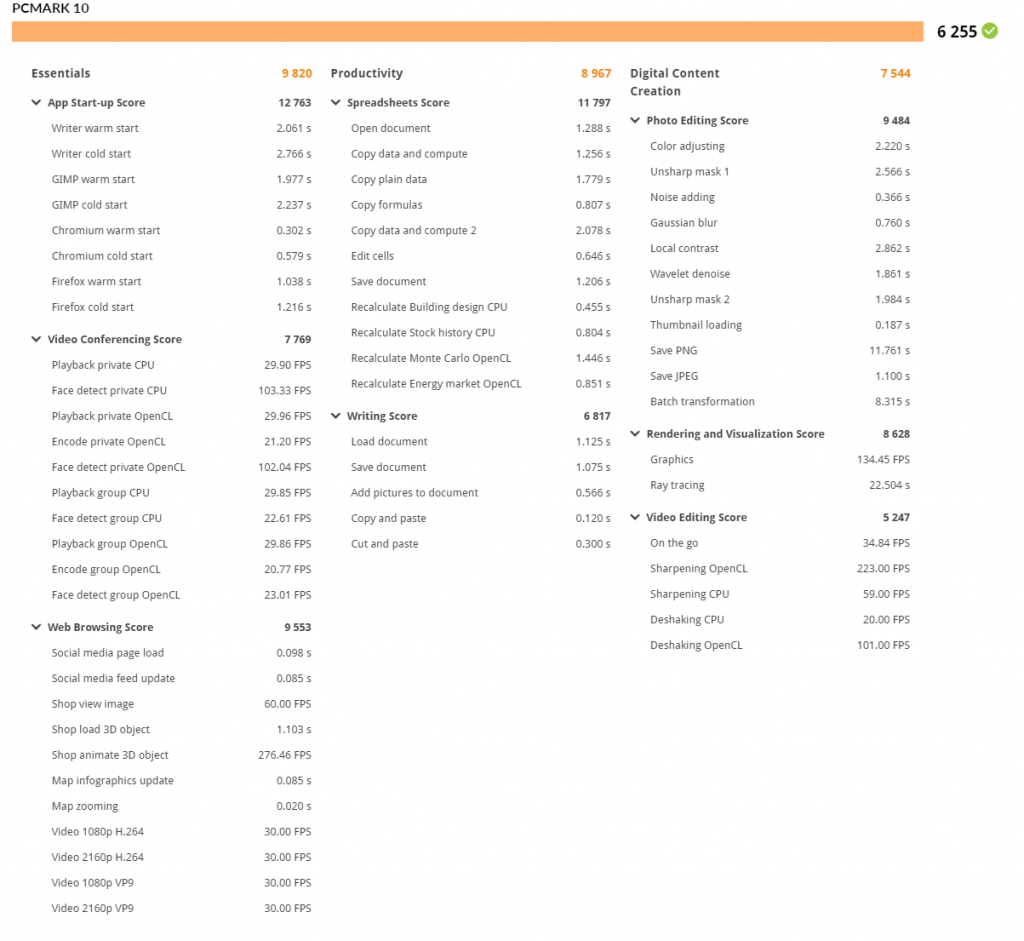 Numbers were a bit behind the ZBook Firefly G8, though results were still good for its class. That said, it fell behind quite a bit in SolidWorks, a modeling computer-aided design and computer-aided engineering professional software package.

Looking at the Montreal model, the HP ZBook Power G8 posted an average and minimum FPS recorded 101.18 and 50.43, respectively. 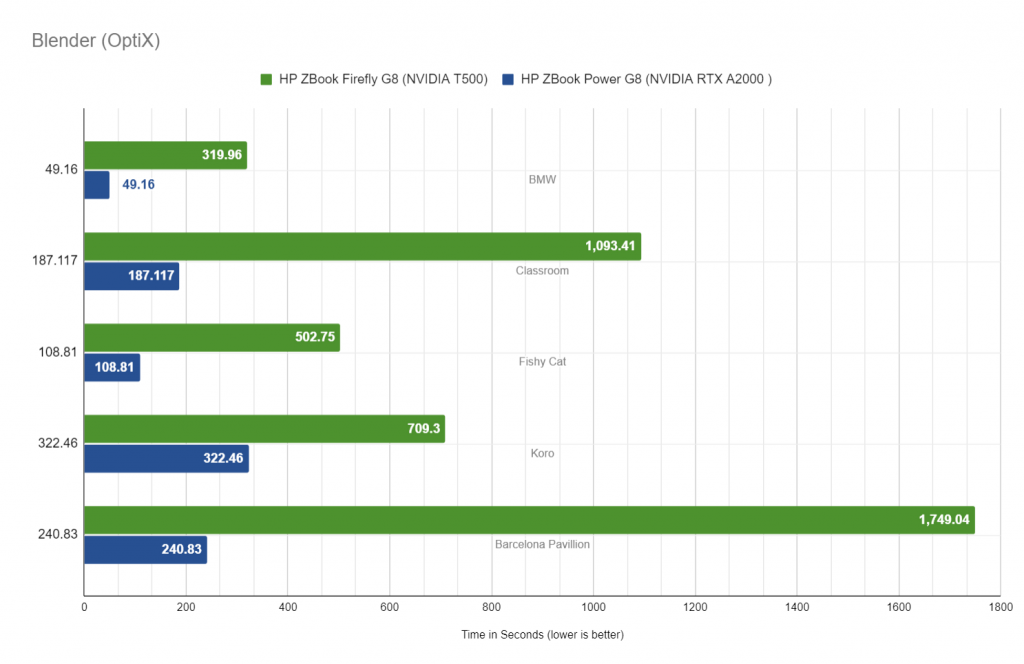 Here, you can see the ZBook Power with great results, showing numbers much better than the Firefly. This is undoubtedly due to the newer-gen and much better specced NVIDIA RTX A2000. 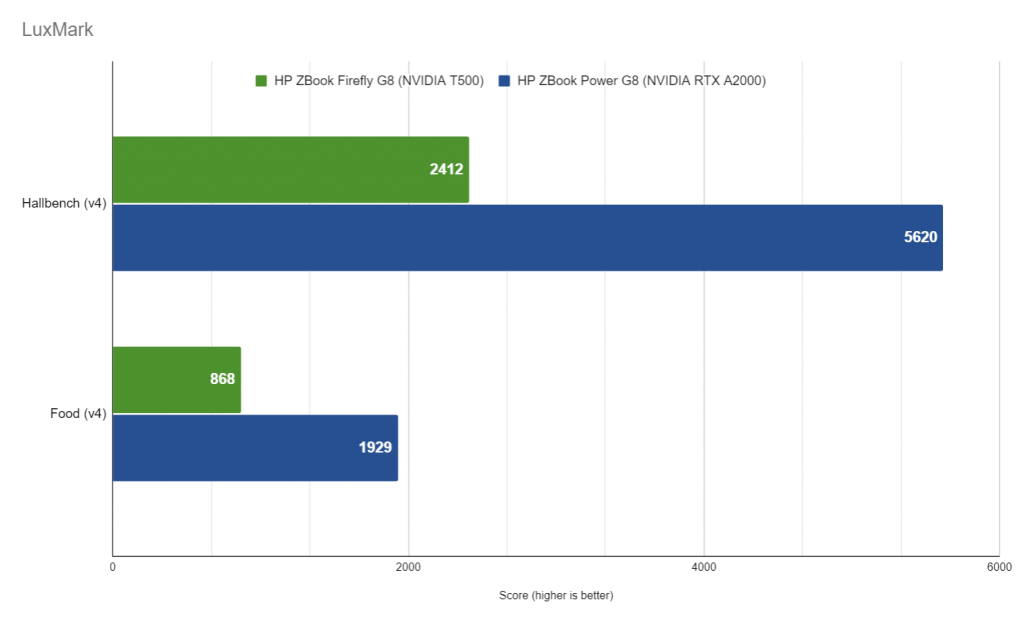 In the food rendering category, the ZBook Power scored 1,929 when equipped with the RTX A2000, while the Hallbench rendering category showed 5,620. These results once again demonstrated the difference in performance compared to the two generations and classes of NVIDIA GPUs.

The HP ZBook Power G8 is part of the newly refreshed line of mobile workstations, featuring a nice-looking, portable build that suits a range of needs. Though it is billed as a more budget-friendly model, this mobile workstation can be outfitted with some higher-end components to satisfy more resource-demanding use cases. The price will quickly rise from “budget-friendly” to “mid-range,” however if users choose to go that route. Nonetheless, this is a highly versatile mobile workstation. 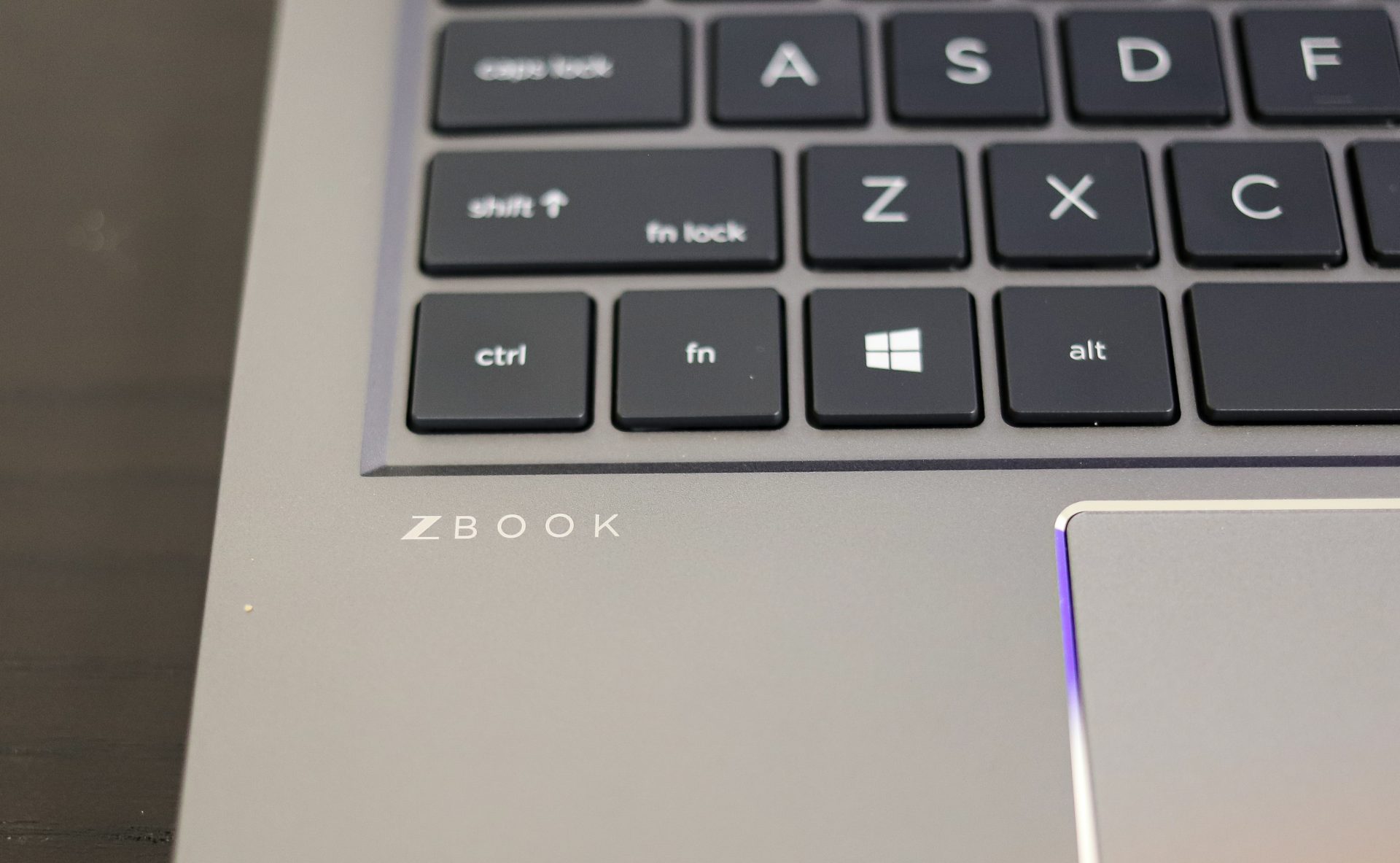 As far as configurations go, users can outfit the new ZBook Power G8 with up to an 8-core Intel Core i9-11950H vPro processor (2.6 GHz to 5.0 GHz), with three other options below (i5-11400H, i7-11800H, i7-11850H, and i9-11900H). Memory configurations include up to 64GB of DDR4 3200 RAM, while internal storage ranges from a 256GB PCIe TLC SSD up to a 2TB Gen4 PCIe NVMe TLC SSD with the option of a second drive for a total of 4TB of speedy NVMe storage. Users have a few GPU choices as well, including the on-board Intel UHD Graphics (33D94AV) graphics, as well as an NVIDIA T600, T2100, and RTX A2000 discrete graphics card, the latter of which is a part of NVIDIA’s new generation of RTX mobile graphics line. We highly recommend choosing a dedicated GPU and higher-end CPU if you plan to use demanding professional software.

For connectivity, the Power G8 features a network port, a SuperSpeed USB Type-A (5Gbps) port, HDMI 2.0 port, and a nano security lock slot on one side, while the other is equipped with an audio/microphone combo port, a Thunderbolt 4 (USB4 Type-C 40Gbps), and two SuperSpeed USB Type-A ports (5Gbps).

The HP ZBook Power is an interesting choice for both professionals and productivity-leaning consumers. It might not be the most powerful model from the ZBook line and doesn’t feature an HP DreamColor panel like the Firefly G8, it performed very well during our gauntlet of benchmarks and certainly ticks many of the more important security checkboxes. It also features a full keyboard (including a numeric keypad) and a sizeable trackpad, both of which are responsive and comfortable to work with. The 4K display model is both bright and beautiful and has enough real estate to fit a couple of program windows side by side. With all of that said, the HP ZBook Power G8 is a great choice for those looking for a nice balance between power and cost.