Being an M.2 form factor, the drive itself is roughly the size of a stick of gum; however, it comes in capacities of 250GB, 500GB, and even a 1TB (which we will be looking at for this review). Along with having such a high capacity for such a small device, it also comes with quoted performance of 3.2GB/s read and 1.9GB/s write, with throughput well over 350K IOPS for both read and write. This level of performance means that it would only slightly trail the 960 PRO and would give consumers a tremendous bump in performance should they upgrade their drive. While its performance can rival the Pro, the Pro does have much better endurance. While the 1TB model of the Pro can hit 800TBW, the EVO peaks at 400TBW, which ranks well compared to even enthusiast SSDs of the same capacity.

The Samsung 960 EVO has a very similar design to the 960 PRO, which uses mostly a black color scheme (including the PCB) and measures in at just 80.15mm x 22.15mm. The parts of the M.2 drive are exposed, so users should be cautious when handling the Samsung 960 EVO, as components could be harmed.

On the rear is an additional label with product certifications. This label is a bit unique though, as it is made of copper and designed to act as a heatsink underneath the controller and NAND packages.

All consumer SSD benchmarks are conducted with the StorageReview HP Z640 Workstation. We compared the Samsung 960 EVO SSD to the following drives:

Our random 4K benchmark puts more strain on the drives in terms of throughput. The 960 EVO came in fourth in writes with 157.75MB/s and last in read with 27.7MB/s.

In terms of our 4K write latency benchmark, the Samsung 960 EVO had great numbers. The 960 EVO beat out the Pro version in average with 0.0244ms and came in second in max latency with 0.46ms. 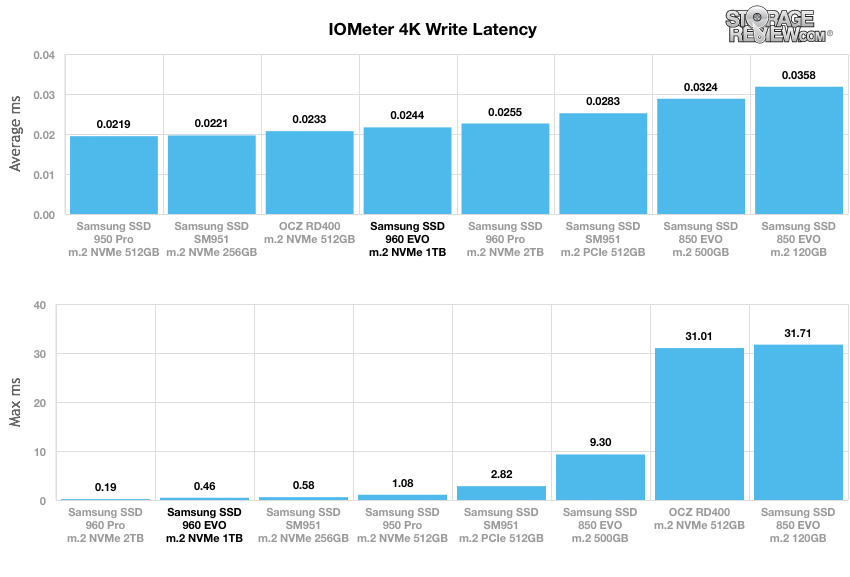 For our next 4K test, we move to a workload with 100% write activity, which scales from 1QD to 64QD. The 960 EVO did very well here, running up around 215K IOPS before settling in first with at around 201K IOPS. 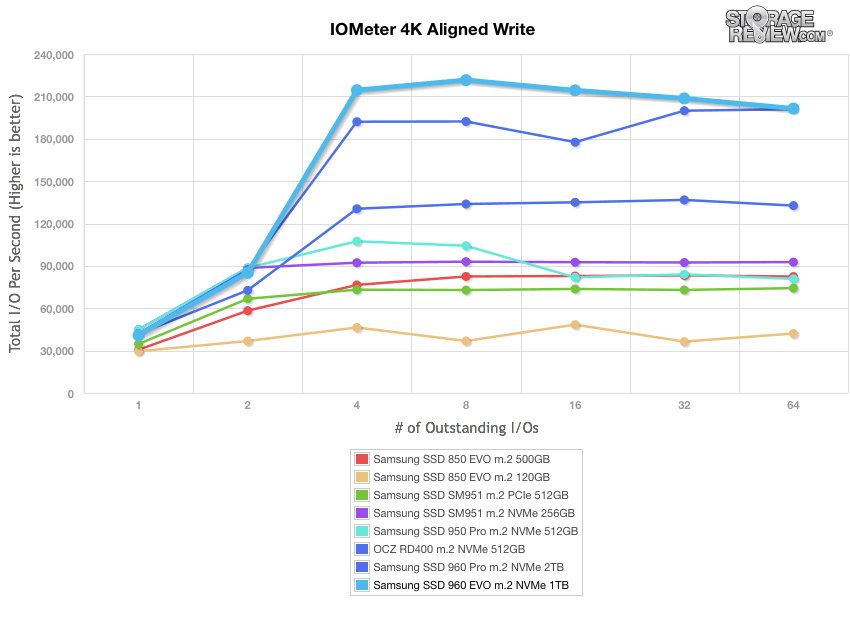 Aligned read showed the 960 EVO having a very steady climb before reaching the top spot at around 247K IOPS. 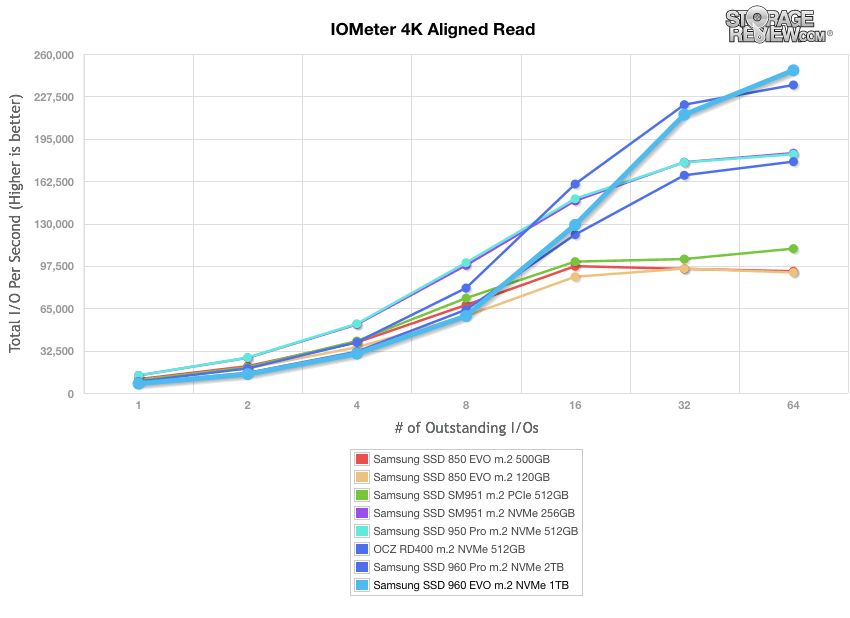 The database profile features a 67% read and 33% write workload, focusing on transfers around 8K in size. The 960 EVO started in the middle and stayed fairly consistent before shooting up to first place near the end—finishing above 175K IOPS. 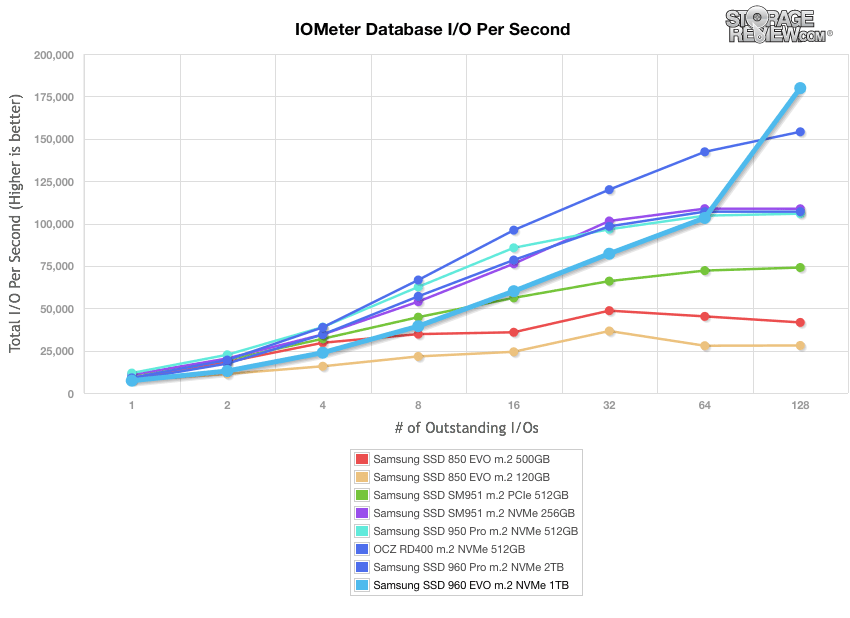 Our next benchmark is the read-only web-server profile, which uses transfer sizes ranging from 512 bytes to 512KB. In this scenario, the Samsung 960 EVO maintained a strong position during the low- to mid-range queue depths. Near the end, the Pro dropped off, letting the EVO–once again–take top spot around 96K IOPS. 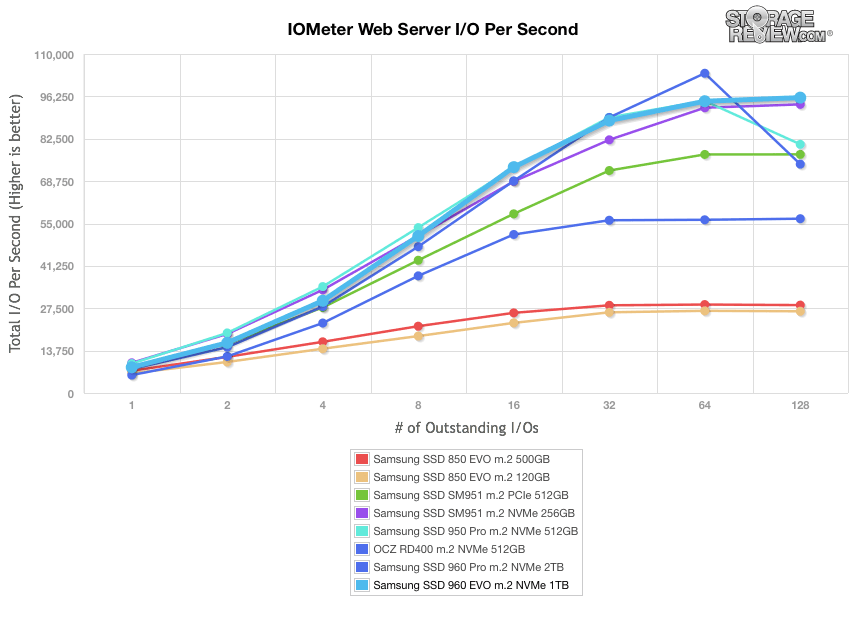 During the file-server profile, which has 80% read and 20% write workload spread out over multiple transfer sizes ranging from 512-bytes to 64KB, the Samsung 960 EVO ran in the middle to bottom here finishing right around 70K IOPS. 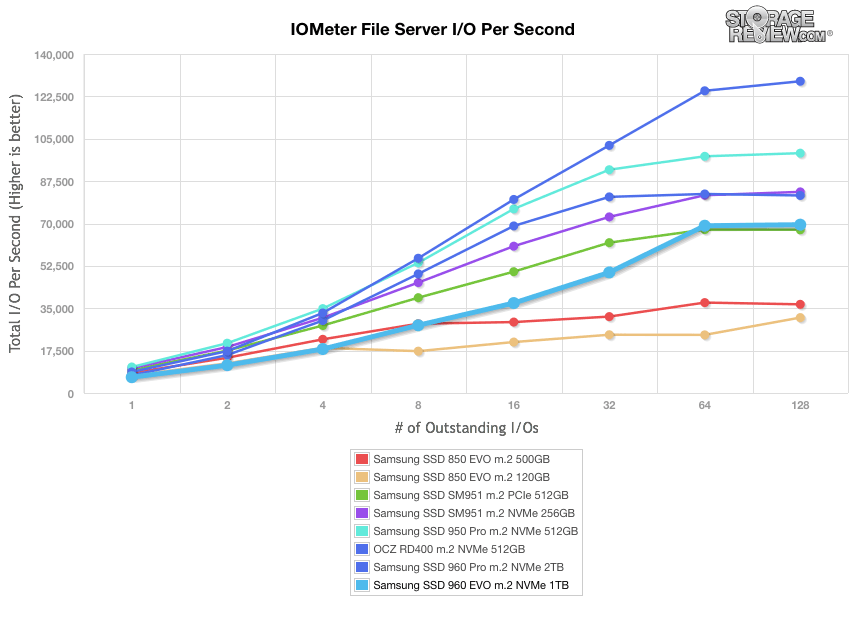 The last profile looks at workstation activity, with a 20% write and 80% read mixture using 8K transfers. The Samsung 960 EVO is not a workstation drive so there was no surprise that it didn’t hang with the top drives. It did perform well, however, finishing fourth at 110K IOPS. 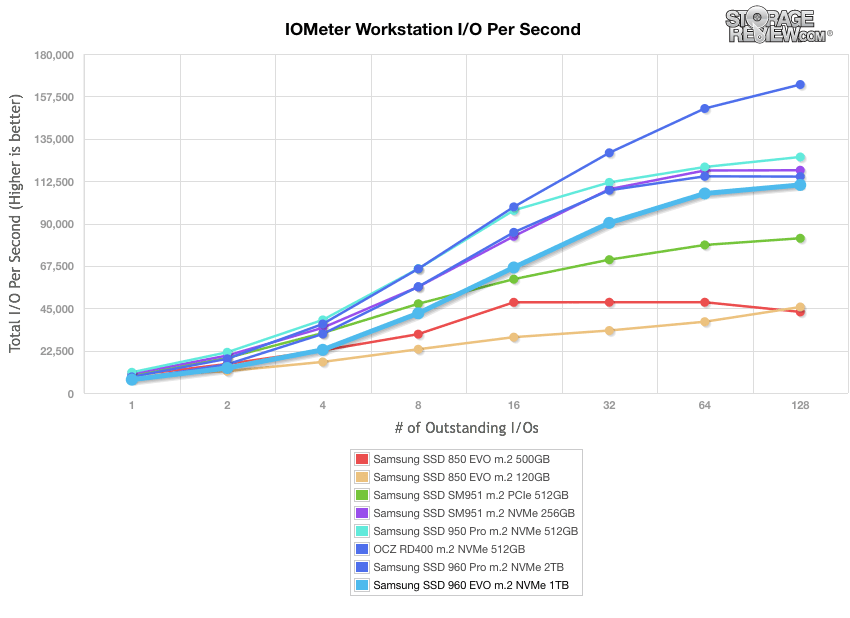 While the results of synthetic benchmarks are important in identifying the key strengths and weaknesses of a drive, performance in these tests does not always translate directly into real-world situations. To get a better idea how the high-capacity Samsung 960 EVO drive will handle itself in the field, we will chart StorageMark 2010 HTPC, Productivity, and Gaming traces against comparable drives. Higher IOPS and MB/s rates with lower latency times are preferred. 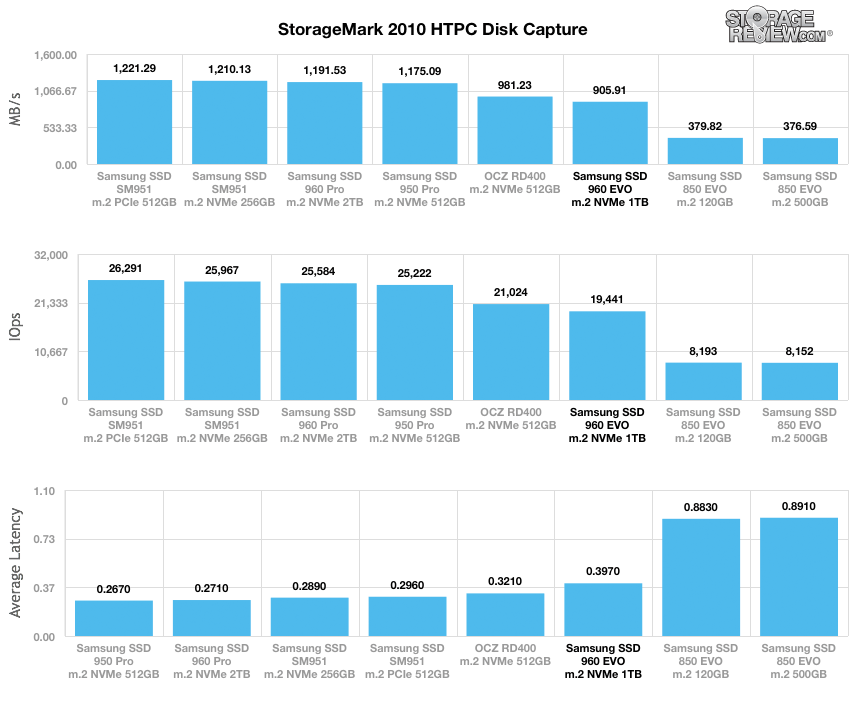 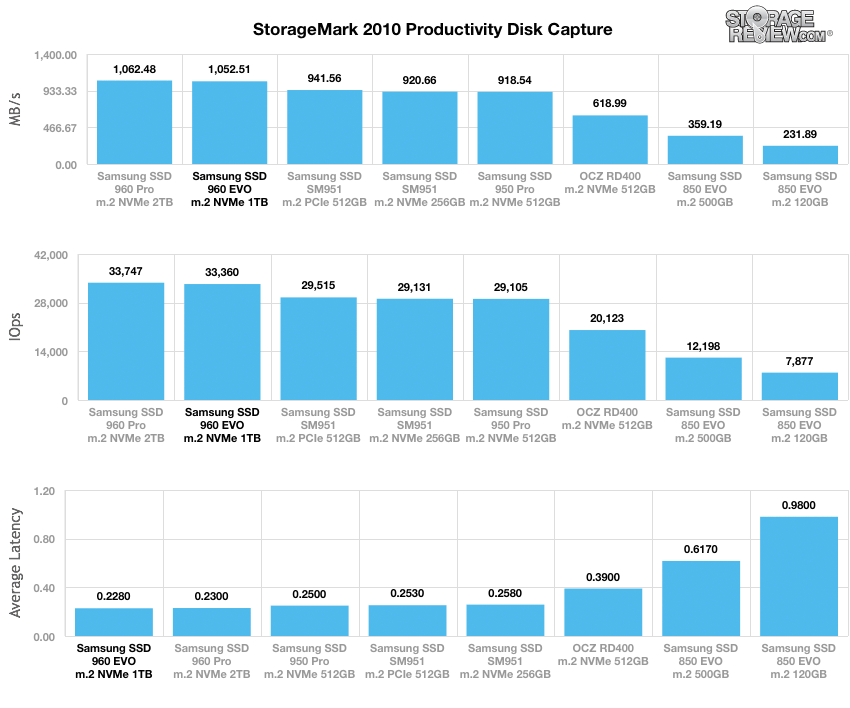 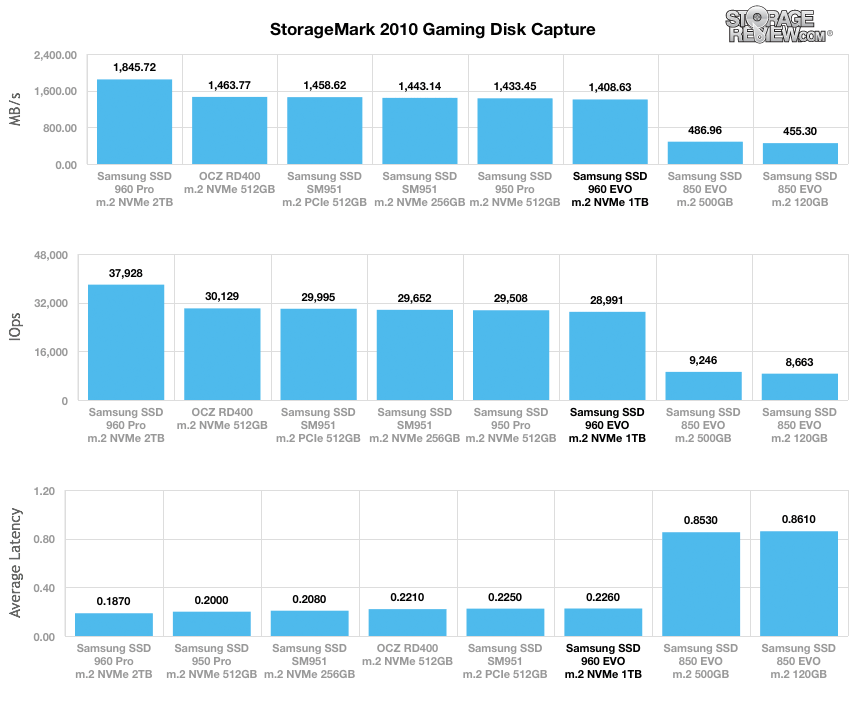 The Samsung 960 EVO is an NVMe SSD targeting budget-conscious shoppers in a M.2 form factor. The drive comes in three capacities: 250GB, 500GB, and 1TB. Unlike its 960 Pro brother, the EVO is aimed directly at the general consumer and priced to appeal to them. The 960 EVO has some great quoted performance (3.2GB/s read and 1.9GB/s write with throughput over 350,000 IOPS for both read and write) that is better than most drives on the market, but not as high as the Pro version.

Looking at performance, we did compare the 960 EVO to the 960 Pro (along with a handful of other drives). While this wasn’t done as a direct comparison to say the Pro is better than the EVO (as it should be), it was more to show users what they can expect from this consumer grade, cost-effective version. That being said, there were some instances where the EVO outperformed the Pro. The EVO was able to edge out the Pro in aligned read and write, as well as IOMeter Database and Web Server. In our sequential 2MB IOMeter, the EVO was able to run right up with its pumped-up performance brother, with 2.3GB/s read and 1.7GB/s write. In our real-world consumer tests, the 960 EVO showed fantastic performance, especially in our productivity trace. The Samsung 960 EVO will make shoppers set their bar higher for budget-friendly SSDs, which to date, have mainly included SATA-based offerings.

The Samsung 960 EVO is the best performing value-oriented M.2 NVMe drive on the market, that is offered in capacities up to 1TB and starts at an affordable price.