The SanDisk Professional PRO-BLADE is an NVMe-based SSD system designed for M&E professionals to facilitate the easy transfer of data between different people. The system is based on a separate reader and media, which SanDisk calls a “Mag” (which, probably intentionally, is also the industry jargon for camera media). The single-mag reader called the TRANSPORT, leverages USB-C 3.2 Gen 2×2, or in normal people’s terms, USB 20Gb/s. It’s also bus-powered, which is a nice plus.

The SanDisk Professional PRO-BLADE is an NVMe-based SSD system designed for M&E professionals to facilitate the easy transfer of data between different people. The system is based on a separate reader and media, which SanDisk calls a “Mag” (which, probably intentionally, is also the industry jargon for camera media). The single-mag reader called the TRANSPORT, leverages USB-C 3.2 Gen 2×2, or in normal people’s terms, USB 20Gb/s. It’s also bus-powered, which is a nice plus.

They also offer the PRO-BLADE STATION which can hold up to four SSD Mags and leverages Thunderbolt 3 to fully unlock the speeds of the NVMe drives. Unfortunately, we didn’t get one for our review because, at the time of writing, they are not available yet. 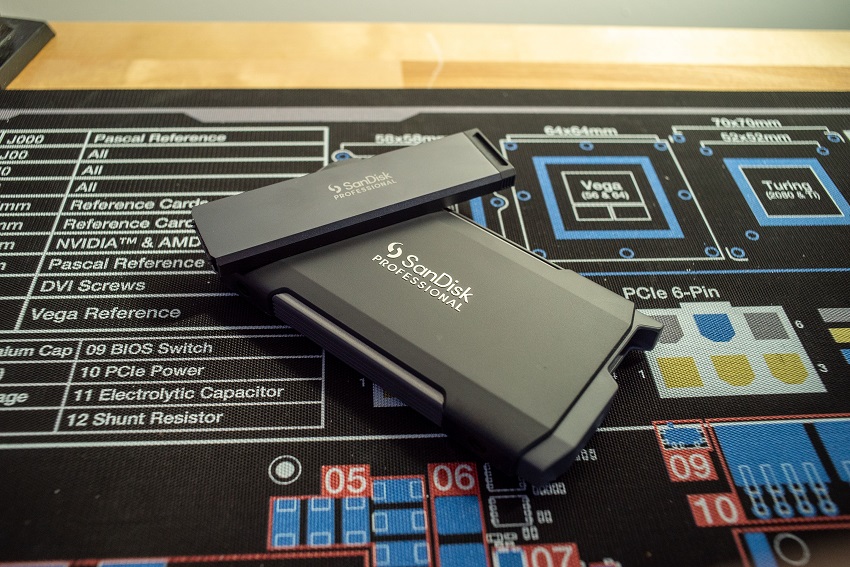 Both the Mag and the reader of this PRO-BLADE setup are built for professional use. That is to say, they have excellent build quality. The Mag is made almost entirely out of aluminum, both for toughness and heat dissipation (which we will touch on a little bit later) and feels nice to handle, which in its intended use case you will be doing a lot. The reader is also mostly aluminum with a plastic shell on the outside. When together, they have a satisfying heft but are by no means heavy. 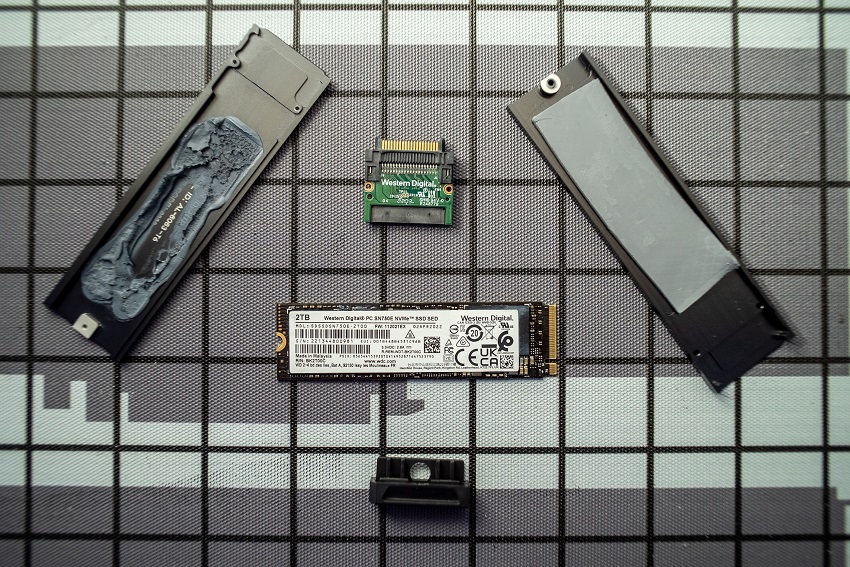 Inside the Mag, we find a standard M.2 NVMe SSD, in the 2TB configuration it appears Western Digital (who owns SanDisk) is using a variant of their WD Black SN750 drives. This is actually a good thing since in our review we noted good sequential performance, which this drive will experience a lot of in M&E uses.

There’s a thick thermal pad for the backside of the drive and thermal goop for the side with the NAND and controller. Probably the coolest little bit of engineering in these is SanDisk’s M.2 interface adapter, which has a connector that’s designed for many insertion cycles. A standard M.2 interface is not designed to be removed and installed repeatedly, so this ensures the longevity of the drive.

In terms of repairability, the M.2 interface adapter has the added side benefit in that it acts as a buffer for the M.2 SSD. You can put whatever M.2 drive you want in here if/when the included one fails and you could also replace just the interface adapter if/when that fails. Now, I find it highly unlikely SanDisk would do this, but I would love to see a BYO Storage option for the SSD Mag where you can load in your own drives to add to the PRO-BLADE ecosystem.

The Mag enclosure is held together with just three T5 screws, so access is quite easy, and while the thermal goop is annoying, it’s certainly trivial to deal with. Being able to repurpose NVMe drives people have already would be great for e-waste reduction and giving customers a low-cost inroad to the PRO-BLADE workflow. 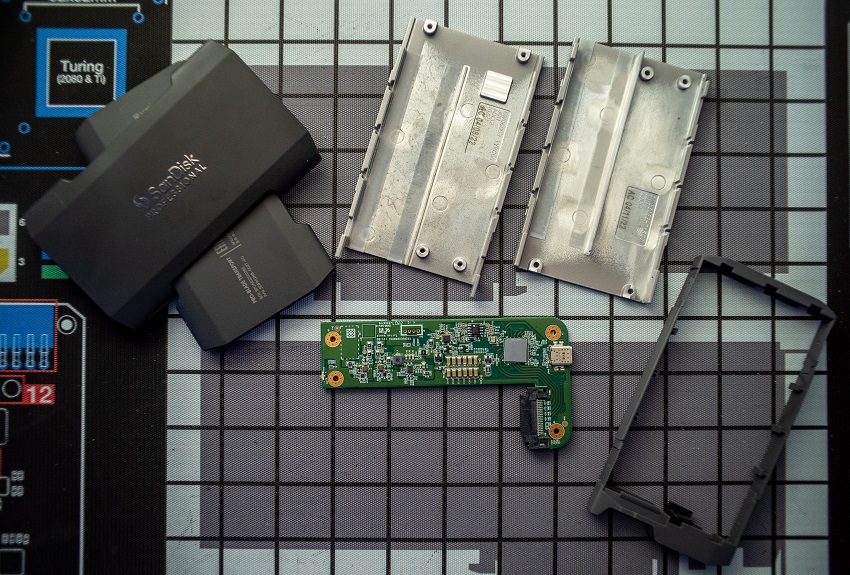 Inside the TRANSPORT reader, we find an aluminum housing, again helping with thermal management, and a surprisingly dense PCB that functions as an NVMe to USB 20Gb/s converter. The inside of the Mag slot is lined with Teflon tape to keep insertions smooth.

The TRANSPORT is a little difficult to disassemble the first time, but not impossible, and didn’t require breaking anything to get in. It’s held together with four 2mm hex screws that keep the plastic shell on, and then four #1 Philips screws keep the PCB sandwiched between the two halves of the aluminum housings.

There’s nothing explicitly “repairable” in here since it’s just a proprietary PCB, but in theory, you could repair the USB-C port if it were ever to be damaged if you had the tools and know-how without much restriction. Practically, the only reason to open the reader is if you get something stuck in the Mag slot, but it can be done and that’s great.

The 2TB SanDisk Professional PRO-BLADE performs just about as well as it can, given its specifications. It easily saturates the 20Gb USB 3.2 Gen2x2 interface and under normal workloads, specifically while using it on film sets doing media management, offloading camera cards, transferring lots of large files, and transcoding footage, it never skipped a beat.

We tested both the 4TB and 2TB versions that were sent to us. The drives performed very similarly, which we love to see. The 4TB eked out a little more performance in the multithreaded workloads, but not enough to make a big deal out of. 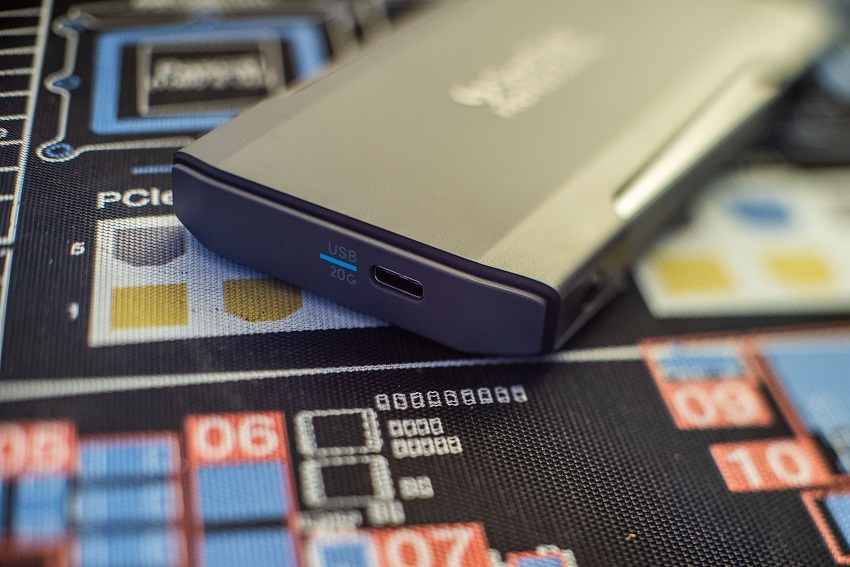 As you can see from the tables above, the more you load up these drives the better they perform. In 4 thread operations in IOMeter we were running into the interface limit (20Gb/s), meaning these drives have even more performance to offer.

Normally this would be a bad thing, and there are plenty of examples of performant drives being hindered by their interface. That’s not the case here because as mentioned before, SanDisk offers a 4-bay Thunderbolt station, the PRO-BLADE STATION, which will let you actually use all the performance these drives can muster.

These drives also handled thermals very well and never had issues with throttling performance in our testing. This goes back to their design effort, which makes all the difference in keeping these drives cool and operating at their maximum level.

The SanDisk Professional PRO-BLADE, a new NVMe-based SSD system designed for M&E professionals to facilitate easy transfer of data between different people, lives up to its intentions. It’s not too much of a surprise, given SanDisk’s reputation in the professional world, but it’s still nice to see them deliver on that expectation. The added utility of being able to swap out just the SSD Mag between systems is one of those things that seems like a gimmick on the surface but turns out to be extremely useful in everyday use. 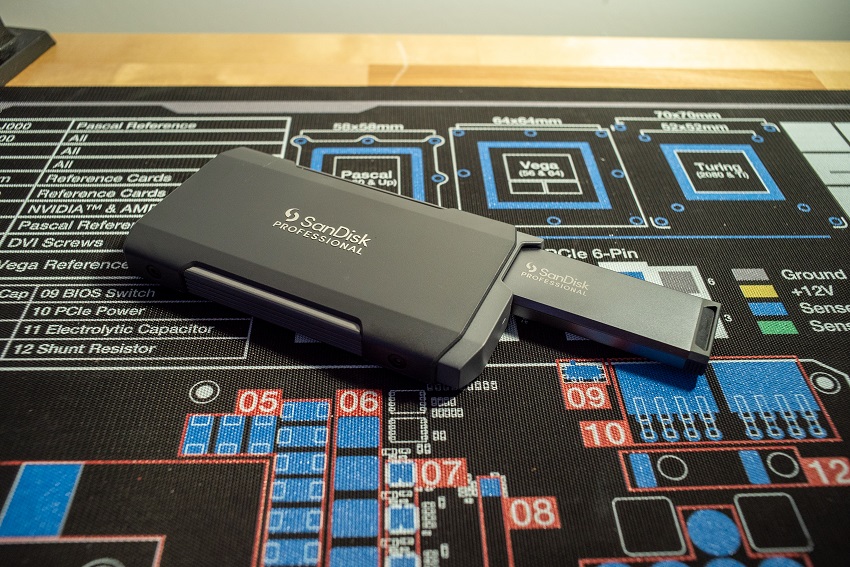 As far as pricing goes, they’re pretty reasonable for what they are. The reader alone, the TRANSPORT, comes in at $69.99 MSRP, with a small discount if you buy it with the storage included. See the table below for a breakdown in cost, as well as a comparison to the SanDisk Extreme PRO Portable SSD V2, which is also a USB3.2 Gen2x2 device.

The gap widens as capacity increases, but all things considered, you really don’t pay a big premium for the functionality that’s this product’s main selling point. Overall, the SanDisk PRO-BLADE offers excellent flexibility for those who need it, and the SSDs themselves offer the performance needed for even the most demanding M&E workflows.