The SanDisk Professional PRO-G40 is a portable SSD built with both Thunderbolt 3 (40Gbps) and USB-C 3.2 Gen 2 (10Gbps) support via a single port and leverages the speedy NVMe interface. Its ultra-rugged build and performance-drive design make it ideal for a range of use cases, including enthusiasts and professionals in the film and media industry who constantly transfer large files.

The SanDisk Professional PRO-G40 is a portable SSD built with both Thunderbolt 3 (40Gbps) and USB-C 3.2 Gen 2 (10Gbps) support via a single port and leverages the speedy NVMe interface. Its ultra-rugged build and performance-drive design make it ideal for a range of use cases, including enthusiasts and professionals in the film and media industry who constantly transfer large files.

Ultimately, the PRO-G40 is meant for users looking for a portable SSD that can not just handle their heavy workloads, but the elements and bumps and bruises as well. The PRO-G40 is available in 1TB and 2TB capacity models. 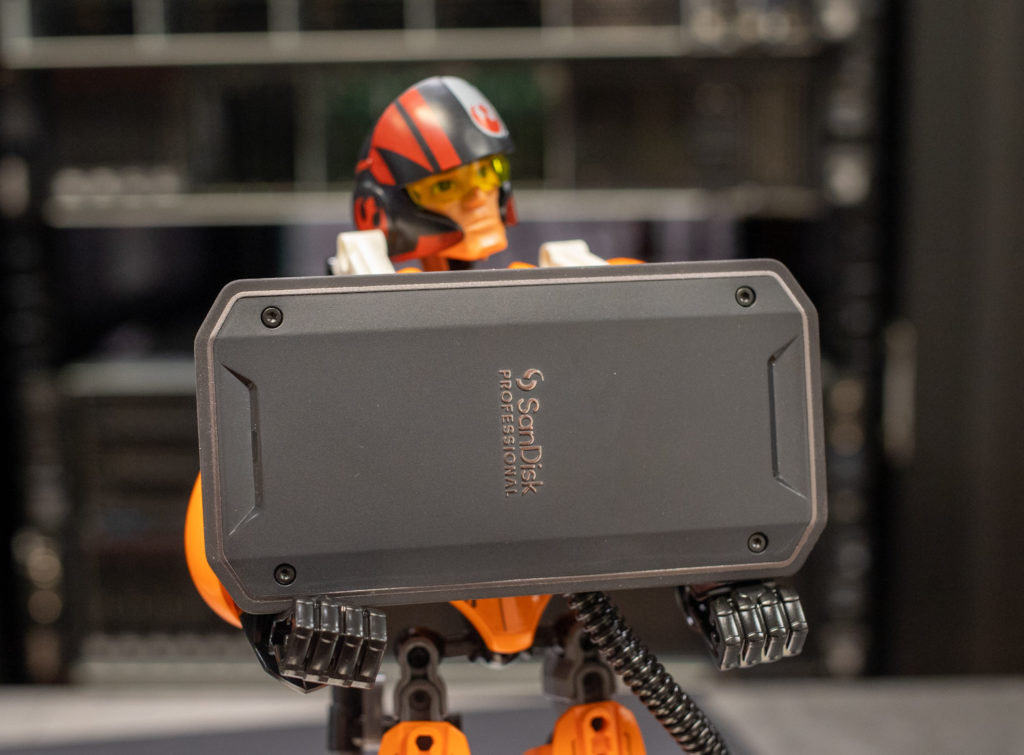 SanDisk is known for its resilient and reliable storage solutions. Professionals from all industries seek out the SanDisk name because they know what they are getting: a fast, reliable, and quality drive. The new PRO-G40 is no exception, which features the WD Black SN750E NVMe SSD inside.

The PRO-G40 also features SanDisk’s usual durability features, as can (potentially) withstand up to 3m drops with a 4,000lb crush-resistance rating. It is also certified with the international IP68 standard, which means it has been tested to withstand dust, dirt, and sand, and can be submerged in water at a maximum depth of 1.5m for up to 30 minutes. This is the same rating most newer Android phones (like the Samsung Galaxy and Google Pixel) have.

The PRO-G40 has a quality enclosure and you can feel how rugged the device is while handling it. It has a very “grippy” feel to it, so you won’t easily drop the drive when you accidentally bump your hand into something while carrying it. This premium build is no surprise to us, as SanDisk always does a good job when it comes to engineering their external storage solutions. 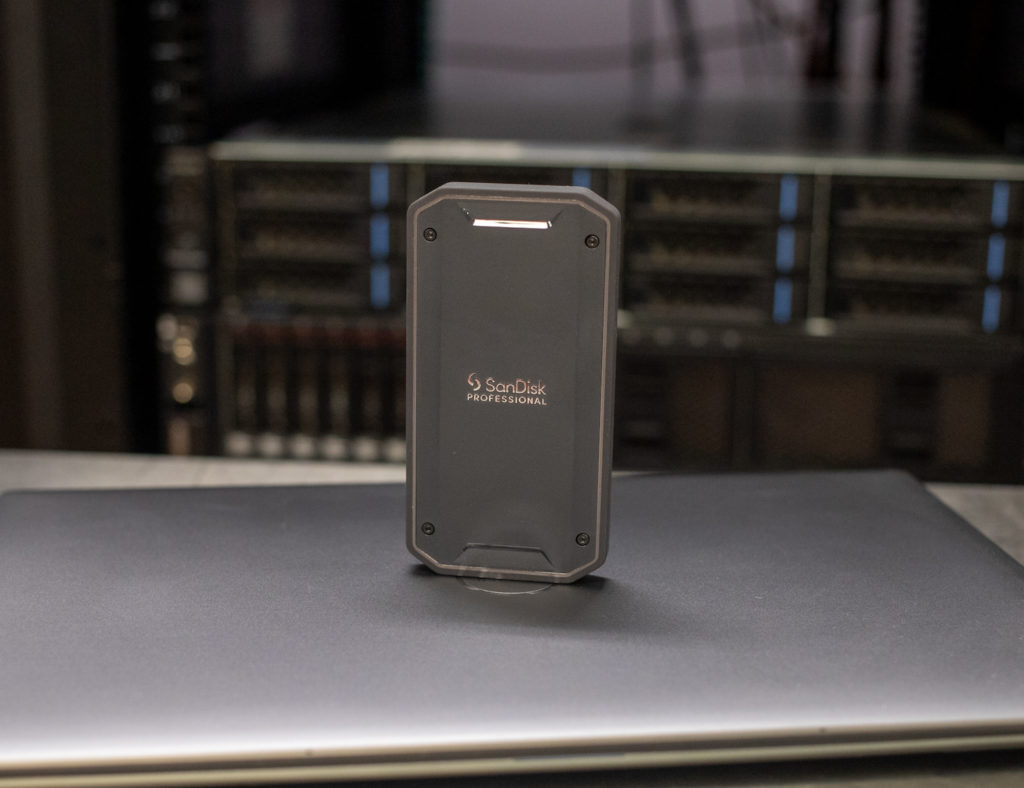 It also features a nice charcoal and grey look-and-feel with a unique octagonal design, and at just 0.27 pounds and slightly under half an inch in thickness, it can easily fit in a pocket. It has the company branding and product line on the front.

The USB-C / Thunderbolt 3 port is located at the bottom of the drive. 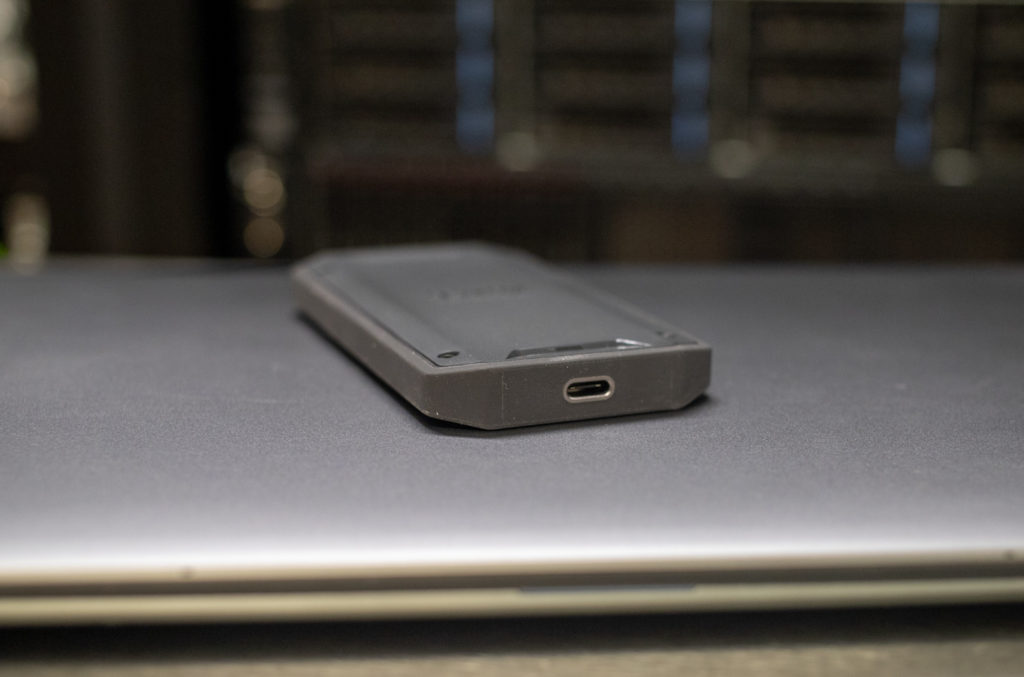 SanDisk indicates that the aluminum core (the silverish-colored ring that outlines the parameter of the PRO-G40) will absorb any heat away from the internal NVMe drive. This will help keep the drive cool while promoting sustained, consistent performance during heavy workloads and large file transfers. 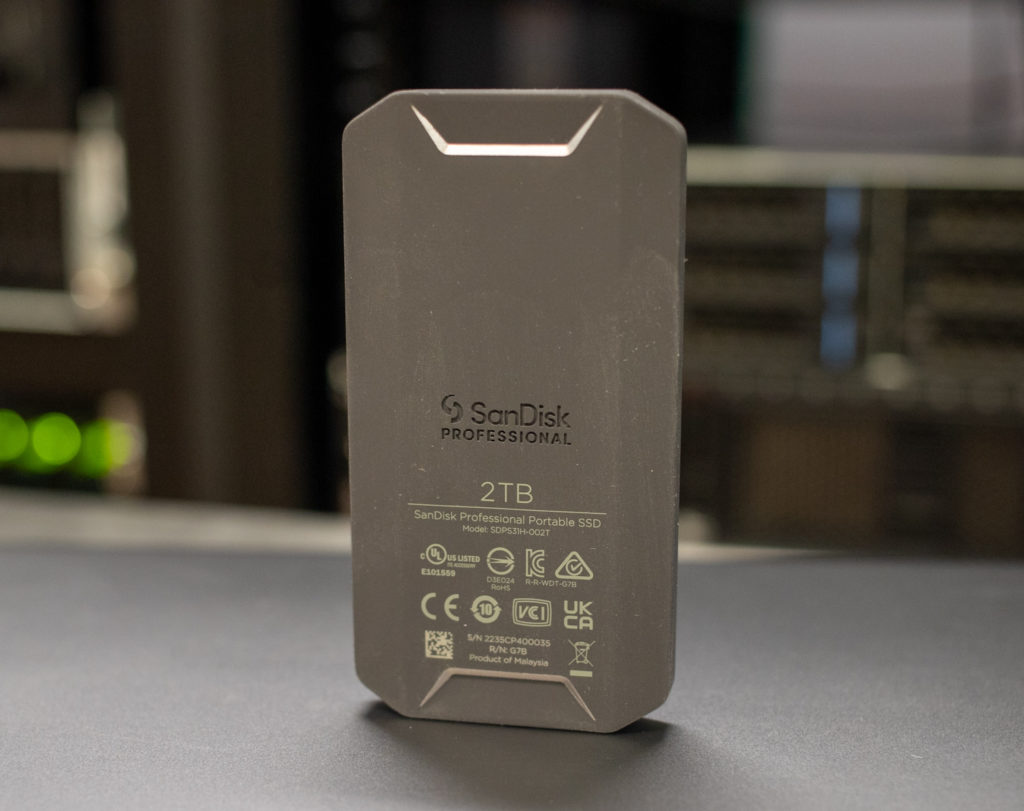 The back of the portable drive features the company branding, model name, capacity size and certifications.

For testing, we used the Lenovo ThinkStation P17 Gen 2 platform, the system we used for other recent thunderbolt-based portable storage reviews. 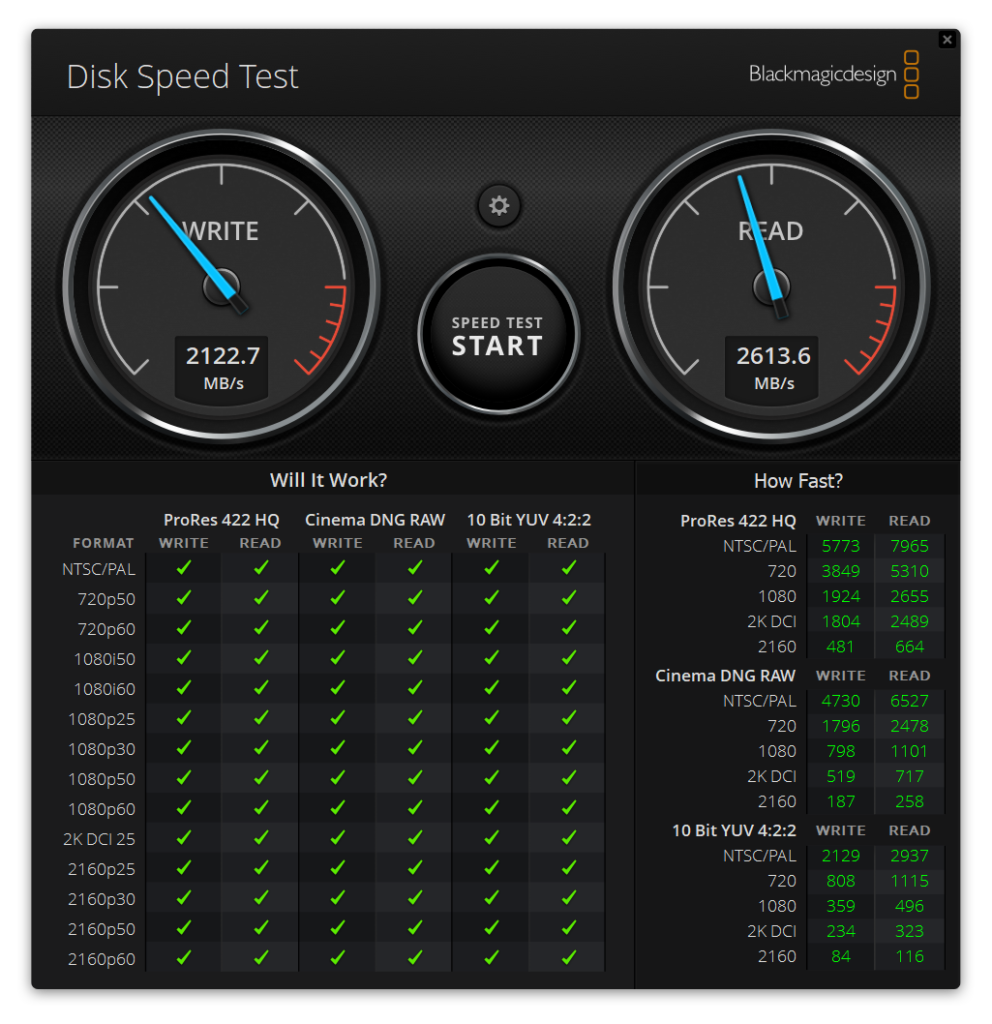 The next test is IOMeter. Here, we looked at 2MB sequential read/write, 2MB random read/write, and 4K random read/write. In our first test, the PRO-G40 yielded lower speeds than the quoted peak claims from SanDisk; however, this is due to the nature of the benchmark, as it is a single-thread test. Nonetheless, for 2MB sequential speeds, the PRO-G40 recorded 1,663MB/s write and 2,399MB/s read, while 2MB random showed 1,206MB/s write and 2,348MB/s read. In our 4K tests, the PRO-G40 reached 3,636 IOPS write and 11,303 IOPS read:

When upped to 4-threads (which puts a heavy workload on the cards), the PRO-G40 showed results pretty much on par with what SanDisk quoted.

Again, here’s a rundown of the results:

The SanDisk Pro-G40 also supports up to 1GB/s speeds through the USB-C port when connected to a non-thunderbolt host. It offers a backward-compatible method of transferring files that no other portable has offered, which is a really big deal. To date, while Thunderbolt portables offer the highest bandwidth, they aren’t compatible with a broad range of USB-only devices saturating the media and entertainment space. This changes the game. 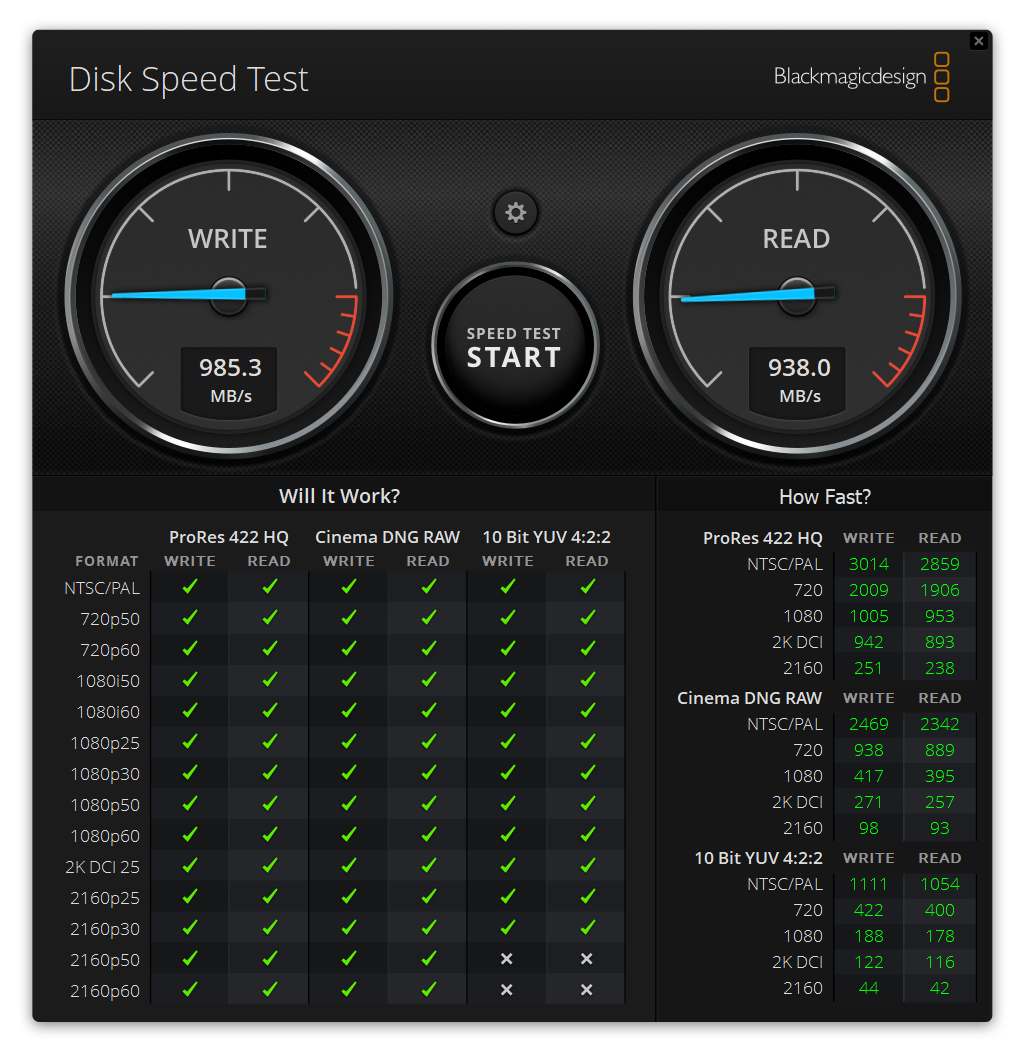 Over a USB 3.2 connection, the SanDisk Pro-G40 saturated the port with transfer speeds measuring 985MB/s write and 938MB/s read. Plenty of speed to move files on or off that don’t support Thunderbolt.

The PRO-G40 is another impressive addition to SanDisk’s comprehensive portfolio of portable SSDs. It features both PCIe Gen 3×2 interface and Thunderbolt 3 connectivity (via a single port) combined with the NVMe protocol. It’s also ruggedly built with a premium enclosure, highlighted by its aluminum core designed to absorb heat and the internal drive nice and cool. This makes the SanDisk PRO-G40 ideal for video or content professionals who need to transfer and store large files. It features the IP68 rating, meaning it can withstand dust, dirt, and sand elements, and can also be submerged in water (1.5 meters) for up to 30 minutes. 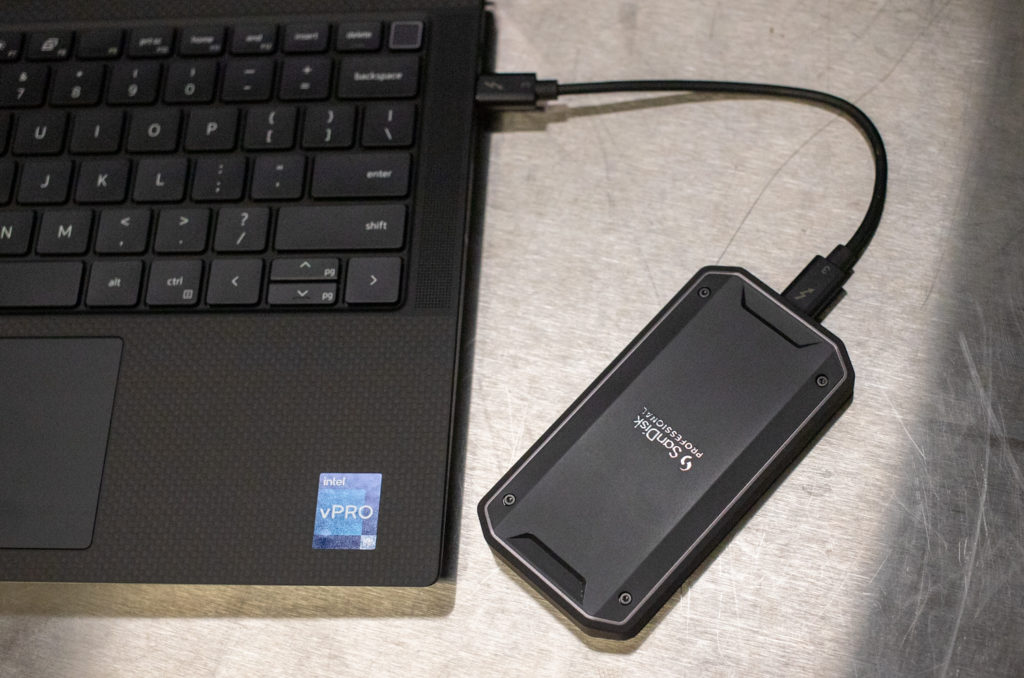 As far as its performance goes, the PRO-G40 posted great numbers, which were in line with what SanDisk quoted (up to 2,700MB/s read and 1,900MB/s write) using a Thunderbolt 3 port. Starting with the Blackmagic Design test, the PRO-G40 was able to hit 2,613.6MB/s read and 2,122.7MB/s write, the latter of which was noticeable better than its rated numbers. Over USB speeds still measured strong with 938MB/s read and 985MB/s write.

All of this isn’t much of a surprise, as SanDisk is well known for building quality storage solutions, especially when it comes to its engineering. Pretty much everything they release holds up very well. As such, SanDisk is the number one brand for media professionals simply because they trust the name and have peace of mind that they are buying a reliable device (e.g., thermals, ruggedness, sustained performance) to store and transfer their important files.

That said, you will certainly have to open up your wallet a bit more for the PRO-G40 compared to other portable SSDs, as the launch MSRP is 299.99 (1TB) and $449.99 (2TB). This expensive price tag, however, is a fair trade-off for many professionals. The time wasted when an external drive isn’t working, or when you’re needlessly waiting for slow data transfers, can cost thousands of dollars of pay for an entire crew waiting around on a set.

But the headline is great performance AND the drive supports both Thunderbolt and USB 3.2 Gen 2. It would have been nice to see support for Gen 2 x2 worked in, but maybe now we’re being greedy. As it is, this is the best overall portable SSD we’ve seen in the lab and any serious portable data pro should definitely add this to the gear bag.