The Constellation ES is Seagate’s 4th generation 3.5" 7200 RPM enterprise-class hard drive. The drives come in 500GB, 1TB and 2TB capacities and support both SATA II and SAS interfaces. The Constellation ES isn’t all about high capacity and performance though; Seagate’s high on their power management and temperature tolerance for enterprise applications. The entire line also offers self-encrypting drive technology as an optional feature. With a spec sheet like this, it’s hard to imagine wanting anything else in a high-capacity enterprise-class storage solution.

The Constellation ES is Seagate’s 4th generation 3.5" 7200 RPM enterprise-class hard drive. The drives come in 500GB, 1TB and 2TB capacities and support both SATA II and SAS interfaces. The Constellation ES isn’t all about high capacity and performance though; Seagate’s high on their power management and temperature tolerance for enterprise applications. The entire line also offers self-encrypting drive technology as an optional feature. With a spec sheet like this, it’s hard to imagine wanting anything else in a high-capacity enterprise-class storage solution. 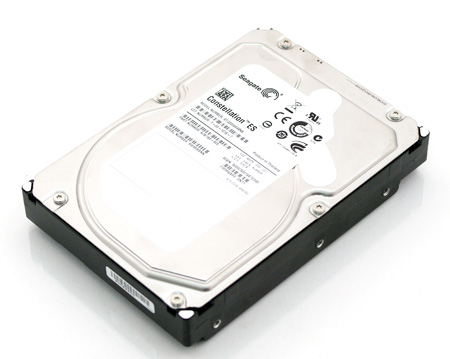 Technical Overview
2TB Seagate Constellation ES SATA Specifications:
·
Aesthetics
The Seagate Constellation ES doesn’t stand out from the pack with a unique body color or sticker choice. Seagate sticks with the tried and true satin black painted body and silver lid with white sticker stuck on top design. The label includes information including the model number, lot number, serial number, voltage requirements, and shipping firmware revision for quick reference. Build quality is nice with a design protecting the circuit board by using the drive body itself as a heatsink. All chips on the board except for the RAM module make direct contact with the drive body. 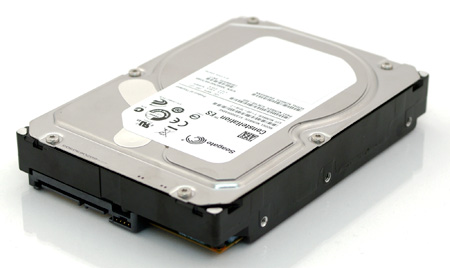 Disassembly
The controller card was simple to remove with the help of a small torx screwdriver. While removing the circuit board we found a foam section placed in-between the drive and board. Metal fingers connect the drive motor and control circuitry to the board with constant tension, preventing loose connections under shock or vibration. 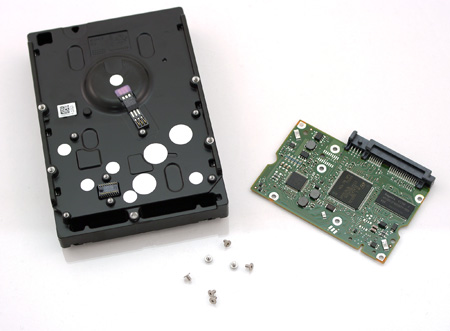 The board itself consists of a Seagate cczz001tq20 controller chip, a Texas Instruments SH6968B motor driver, and a 64MB Hynix 400MHz DDR RAM module. 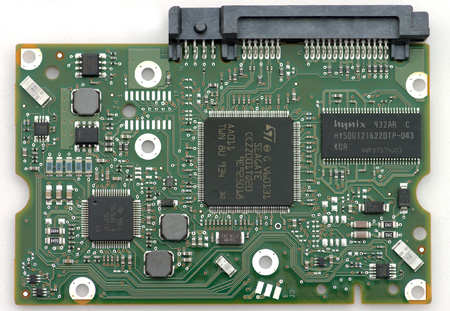 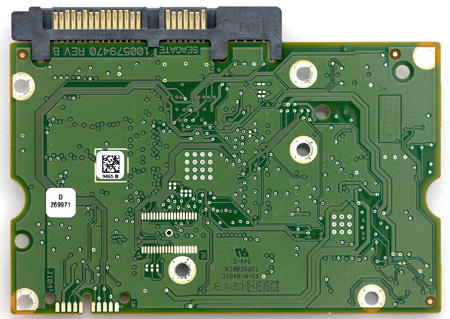 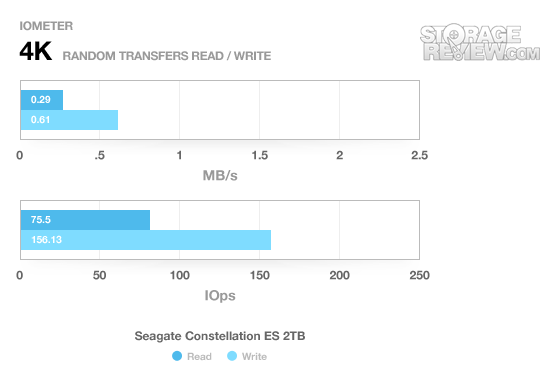 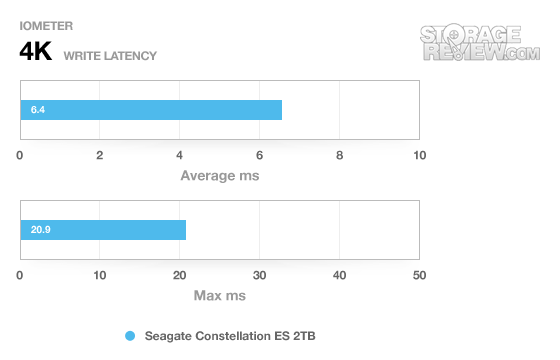 To see how well the drive performs with a stacked request load we used standard Database, Web Server, File Server, and Workstation profiles spanning 2 minute individual test with a 5 second ramp time and a depth queue of 1 to 128. 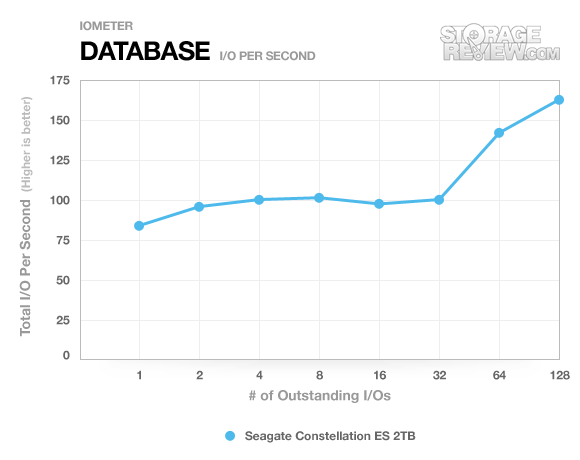 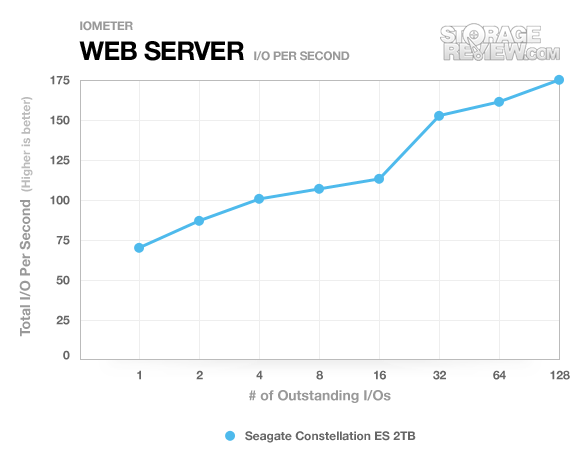 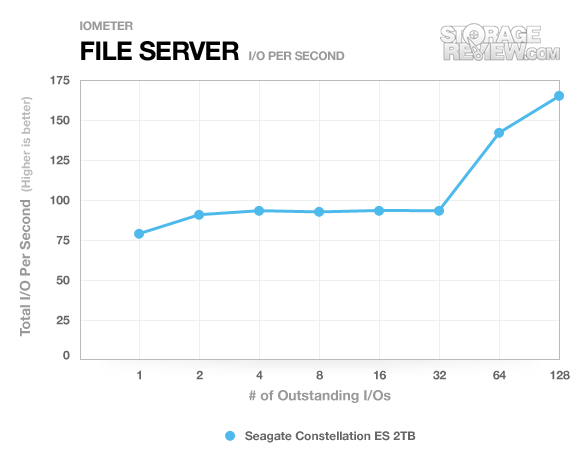 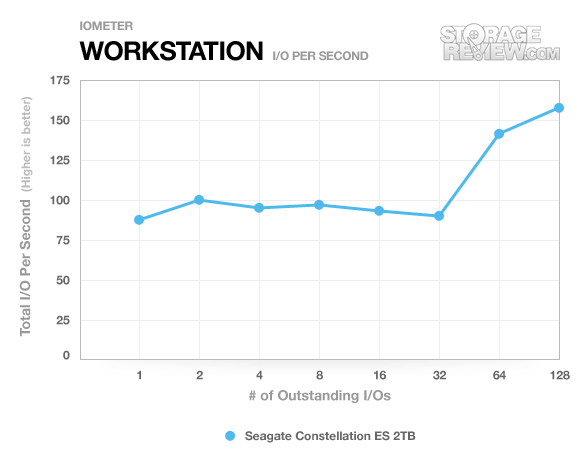 CrystalDiskMark showed slightly higher sequential read transfers then our IOMeter tests using the 500MB test size. To compare performance between the slowest and fastest sections of the drive we used 600MB partitions positioned on the outermost and innermost locations on the platters. At its best the drive transfers data at about 130MB/s for read/write and at its worst it slows down to about 65MB/s read/write. 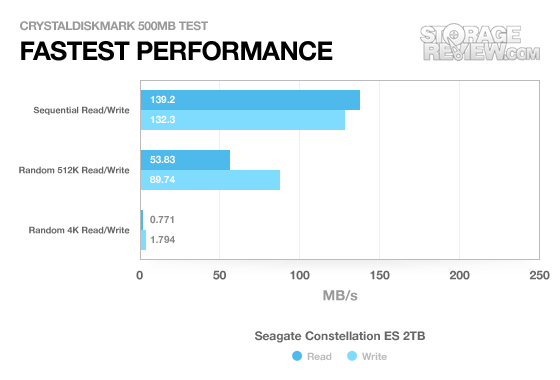 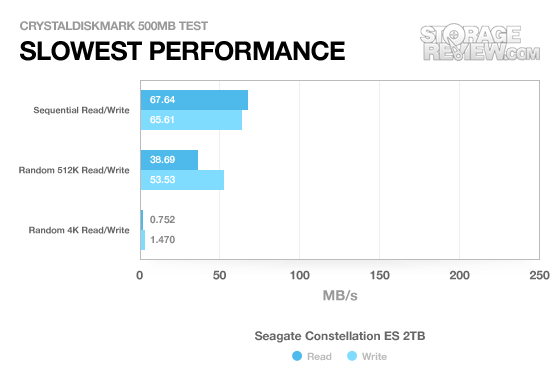 Power Consumption
Power usage and heat output are very important items when companies look at drives to use in datacenters. The more power a drive uses, the more heat it puts out, and the more the company needs to spend on cooling. Seagate lists an average idle power draw of 7w, an average operating power draw of 11.2w, and an average seek power draw of 10.2w.
To test power consumption we used the same IOMeter profiles for our speed tests with in-line meters logging and averaging the power usage. At the end of the test we stopped our rig and recorded the values. The peak startup wattage was measured over three tests with the maximum 5v and 12v amp draws recorded.
For the Constellation ES drives Seagate offers PowerChoice which lets the end-user select one of four advanced power savings modes.
Idle_A

Idle_C/Standby_Y (SAS)
Standby_Z
We measured an average idle power draw of 6.46w, 8.56w and 8.63w for write and read respectively, and 10.15w for constant random 4K read activity. While running inside the drive cage assembly in the StorageReview Dell XPS 9000 the Constellation ES reached a maximum temperature of 103F as recorded with a Fluke IR thermometer. 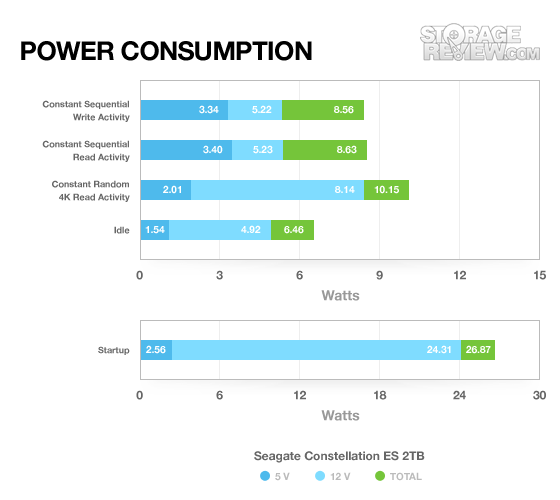 Warranty
Seagate offers a 5-year limited warranty on the Constellation ES which is in line with other hard drive manufacturers. To handle defective or broken drives they have standard and advanced replacement programs. With the standard replacement program you pay to ship the drive to Seagate and upon receipt they mail a new drive out. Advanced you pay a $20 free and they mail a replacement drive to you with a return box for the old drive.
Conclusion
The Seagate Constellation ES 2TB gives users solid performance with 129MB/s read and 133MB/s write transfer speeds on the 2TB SATA model. Seagate puts a strong emphasis on energy savings with the Constellation ES, offering PowerChoice to reduce power during slow or idle periods. In our tests with the drive in an active state we saw an idle power draw of 6.46w which was just under the advertised power draw of 7w. For users with security in mind Seagate also offers Self-Encrypting Drive (SED) as an option. Factor in that there’s also an SAS model and the Constellation ES has its bases covered.
Pros
Cons
Bottom Line
512GB, 1TB, and 2TB configurations offered in SAS and SATA interfaces with plenty of security and power savings options make the Seagate Constellation ES line a solid drive for high-capacity enterprise storage needs.
Discuss This Review
0 comment 0 FacebookTwitterPinterestEmail