Synology designed their 12-bay DiskStation DS2415+ to provide massive storage and strong performance to larger businesses. The DS2415+ provides all of the same features as Synology’s other DiskStations (most notably, their award-winning DSM interface), while allowing for scalability through the DX1215 expansion unit (which would take the total raw capacity up to 144TB). In terms of specifications, the DS2415+ leverages a 2.4GHz CPU and 2GB of DDR3 RAM (expandable to 6GB), with four USB 3.0 ports. The DS2415+ is the only 12-bay DiskStation in Synology’s Plus Series, and it provides the largest storage capacity out of all of their DiskStations.

Synology designed their 12-bay DiskStation DS2415+ to provide massive storage and strong performance to larger businesses. The DS2415+ provides all of the same features as Synology’s other DiskStations (most notably, their award-winning DiskStation Manager interface), while allowing for scalability through the DX1215 expansion unit (which would take the total raw capacity up to 144TB). In terms of specifications, the DS2415+ leverages a 2.4GHz CPU and 2GB of DDR3 RAM (expandable to 6GB), with four USB 3.0 ports. The DS2415+ is the only 12-bay DiskStation in Synology’s Plus Series, and it provides the largest storage capacity out of all of their DiskStations. 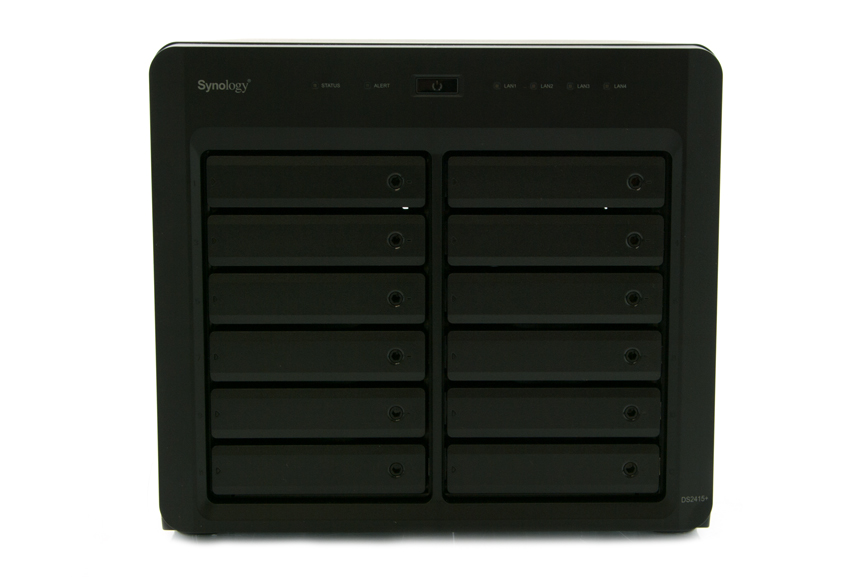 Like all of Synology’s DiskStation servers, the DS2415+ is comprehensive storage solution that includes all of the functions necessary to serve most businesses. Synology reports that the DS2415+ delivers encrypted transfers at 450MB/s read and 198MB/s write, and its quad LAN ports help minimize downtown in the event of connection malfunctions. SSD cache technology allows users to combine the use of hard drives and solid state drives depending on the use case. Synology’s DiskStation Manager (DSM) gives users an easy-to-use browser based interface through which they can manage the DS2415+.

The DS2415+ is Synology’s largest available DiskStation configuration, and its physical footprint shows that. It has two columns with six bays each and the drives oriented horizontally with status LEDs the right of each bay. The face of the drive is encompassed mostly by the drive bays, but there is also some branding, a power button, and LEDs corresponding to system status, system alerts, and connectivity status for each of the four LAN ports. 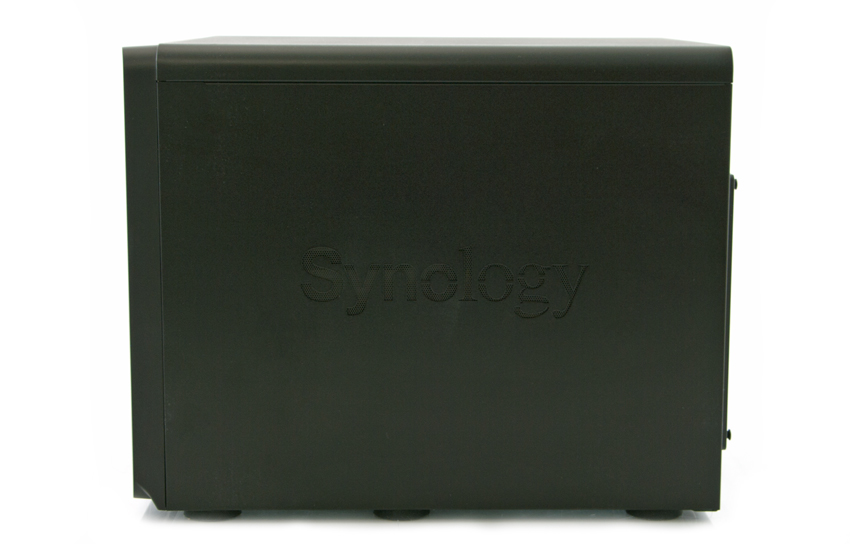 The back of the DS2415+ has two large fans lined up horizontally, four USB 3.0 ports, four LAN ports, a reset button, and the AC adaptor port. 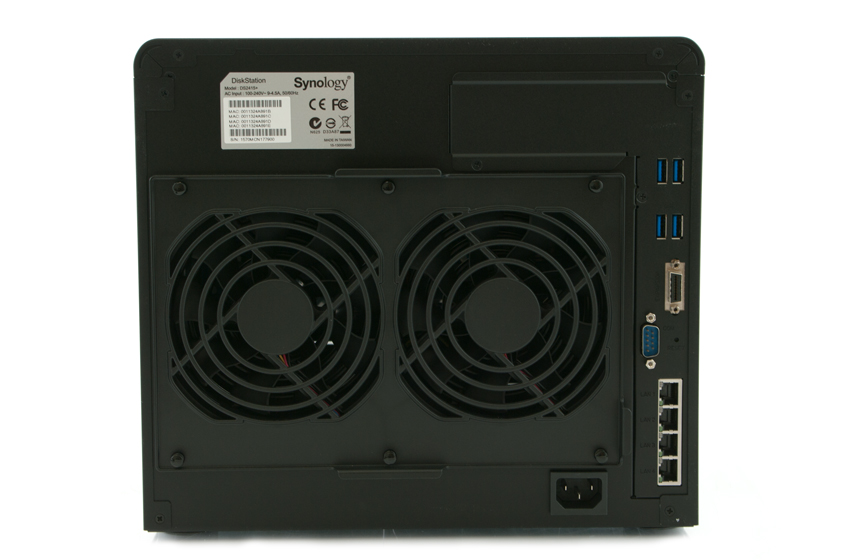 We tested both CIFS and iSCSI performance using RAID10 configurations of the WD Red NASware 3.0 6TB and compared the DS2415+ to Synology’s DS1815+.

Using the iSCSI block-level test for the same benchmark shows the same distribution with very similar numbers. The read latency in iSCSI was lower than in CIFS (339.3ms for the DS2415+), and the write latency was higher (167.8ms for the DS2415+).

In the maximum 4k latency benchmark in the CIFS file-level test, the DS2415+ posted higher latencies than the DS1815+ in both read and write, with 3,489ms and 2,803ms, respectively.

Calculating the DS1815+’s standard deviation for the 4k latency allows us to show how consistent the latency results were within each of the categories during our benchmarks. When looking at the CIFS configuration, the results for the DS1815+ and DS2415+ were very similar, with the latter posting 755.8ms read and 158.8ms write.

The next four charts are based on a protocol consisting of 70% read operations and 30% write operations with an 8k transfer size. The workload is then varied from 2 threads and a queue depth of 2 up to 16 threads and 16 queue. The DS1815+ outperformed the DS2415+ for the duration of our CIFS file-level test.

The DS1815+ exhibited performance spikes when configured in iSCSI, whereas the DS2415+ posted a more consistent performance. However, the DS1815+ still outperformed the DS2415+ for most of the test.

In terms of average latency, the DS1815+ once again outperformed the DS2415+ when configured in CIFS, although their numbers were fairly similar.

The results for our iSCSI average latency benchmark were similar, but the two servers had slightly closer numbers than in the CIFS test.

The DS2415+ performed very well in our CIFS-configured max latency benchmark, handedly outperforming the DS1815+ for the duration of the test.

When configured in CIFS and looking at standard deviation, the two servers exhibited performances that were almost indistinguishable from each other.

For the final mixed workload benchmark (iSCSI), the DS1815+ posted a slightly better performance than the DS2415+ in terms of standard deviation.

The final synthetic benchmark utilizes much larger 128k transfer sizes with 100% read and 100% write operations. The two servers had similar numbers across the board when configured in CIFS. The DS2415+ posted 462,655KB/s in read and 452,325KB/s in write (which was about 7,000KB/s higher than the write performance of the DS1815+).

In terms of performance, the DS2415+ holds up unevenly when compared to Synology’s 8 bay DS1815+. In general, the DS2415+ tends to excel in write functions, especially when configured in CIFS. In our 4k tests the DS2415+ gave us write throughput of 2,519 IOPS CIFS and 1,524 IOPS iSCSI. The DS2415+ was slightly weaker in some of the mixed workload benchmarks when compared to the DS1815+. The DS2415+ exhibited much higher numbers than the DS1815+ in our 128k benchmark when configured in iSCSI, hitting speeds of 459MB/s read and 440MB/s write.

Synology’s DS2415+ is a high performing scalable 12-bay NAS with all of the features provided by DiskStation Manager, making it a strong option for larger businesses that are looking for a comprehensive storage solution.