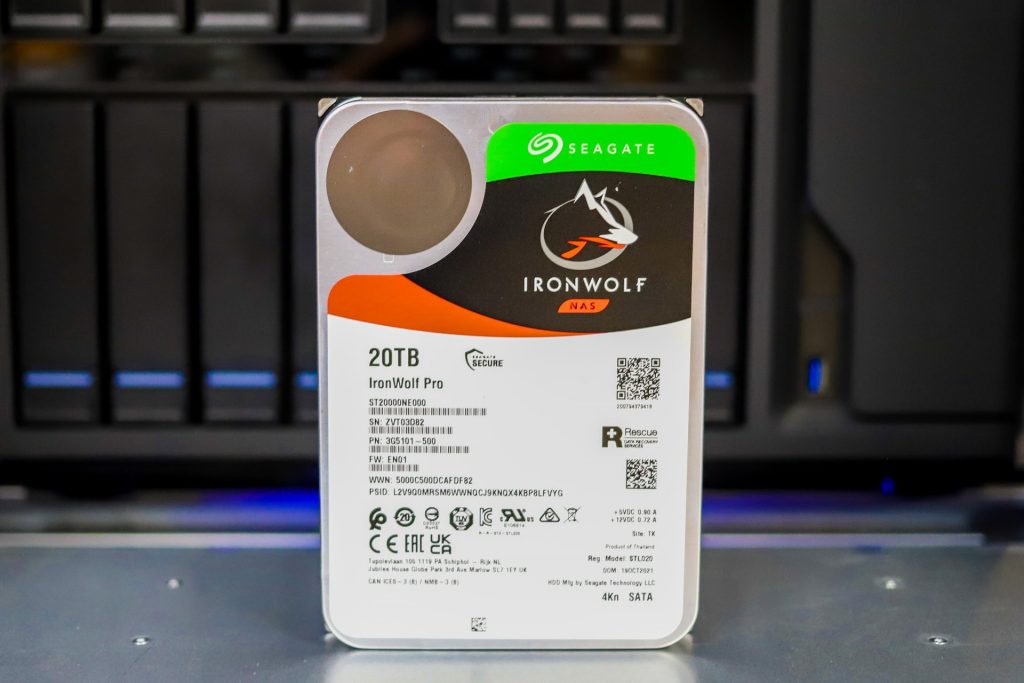 There are a lot of benefits that come with the new 20TB capacity point, especially in large-scale, multi-user commercial and enterprise NAS environments in both creative professionals and SMB use cases. The new Seagate drives will also lessen the physical footprint of these servers and allow businesses to scale as their data needs grow.

For reliability, the new high-capacity IronWolf Pro features the same specifications as the 18TB model: 300TB per year workload for intensive client use cases coupled with a 1.2-million-hour MTBF rating. It also features built‐in RV sensors, which essentially accelerometers mounted on the HDD PCBA that provide an output proportional to acceleration, vibration, and shock. With it, drives like the IronWolf Pro are able to measure external forces dynamically, providing vital data that can be used to correct and compensate for these environmental changes.

Performance-wise, the IronWolf Pro 20TB is quoted with a max sustained transfer rate of 285MB/s. This is a noticeable increase compared to IronWolf 18TB model, which was set at 260MB/s. That said, those are best-case numbers, our testing in this review will highlight more attainable performance numbers. 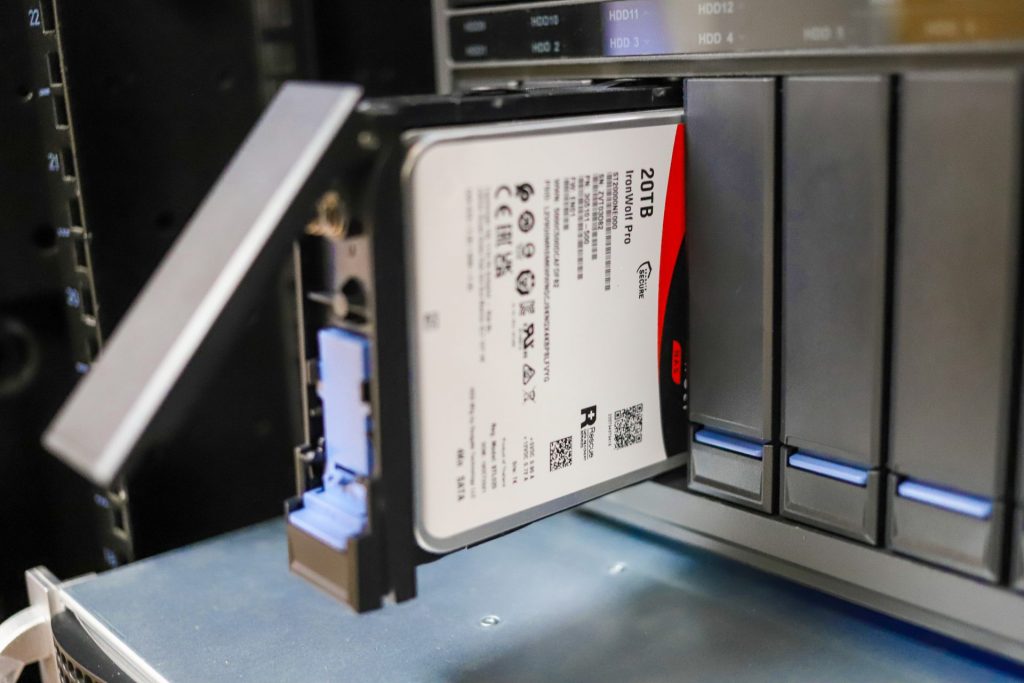 Though power consumption is very similar to the 18TB capacity model, there are a few notable differences. For example, while the average idle power of the 20TB model is slightly more (5.5W vs. 5.2W), its average output has decreased by 0.3W. Moreover, its standby mode is set at 1.0W (compared to 1.25W for the 18TB), which can lead to better overall power efficiency.

IronWolf Health Management (IHM) is also a big part of ensuring peak system health. With it, you will be able to gain more visibility into drive health and usage indicators such as temperature, shock, vibration, intermittent connections, and signal integrity. Users can then take action based on this information to ensure their data is always safe and secure. 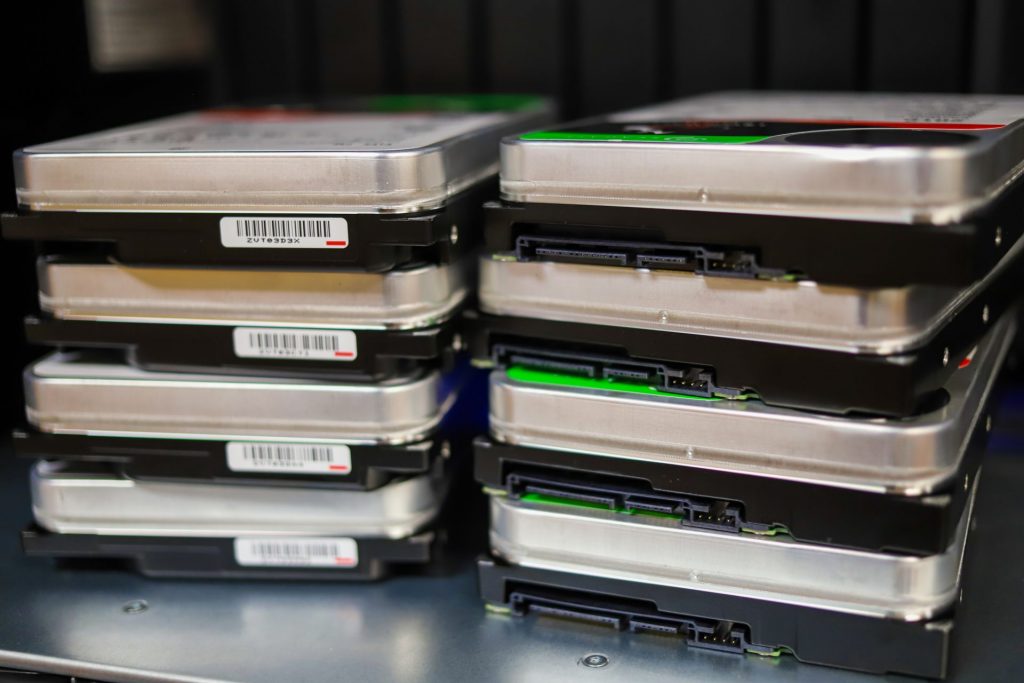 For added peace of mind, the IronWolf Pro 20TB is backed by both a 5-year warranty and 3 complimentary years of the company’s extensive Rescue Data Recovery Services. The latter will aid users in recovering data due to accidental corruption or drive damage. Seagate indicates that their recovery services have a 95% success rate.

For testing, we looked at 8 of the IronWolf Pro 20TB drives using a RAID6 configuration inside our QNAP TS-1685. 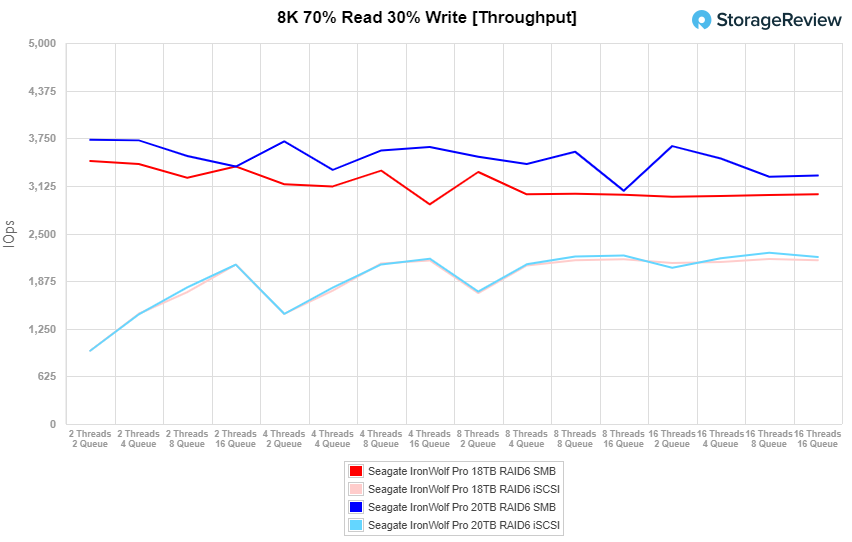 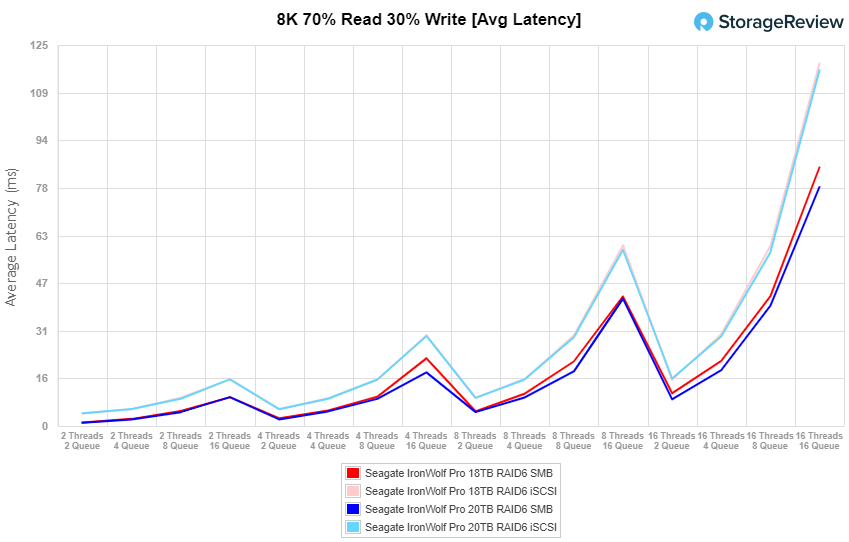 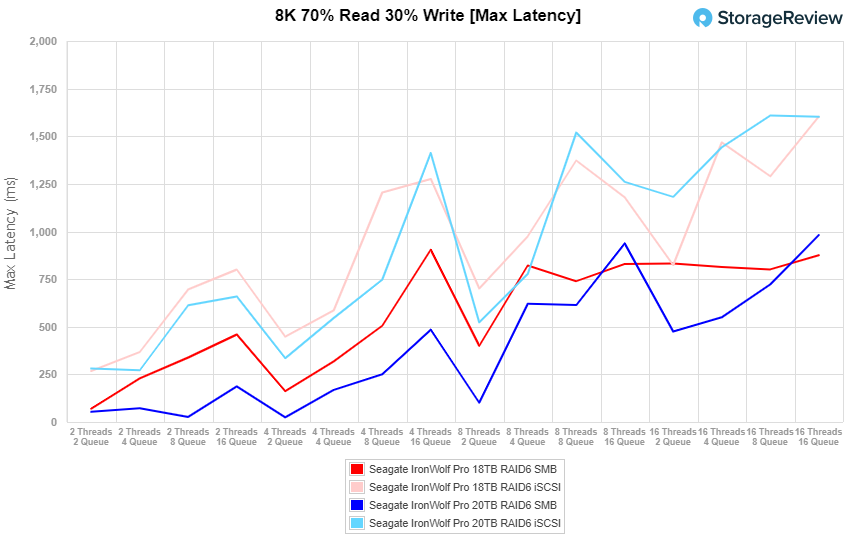 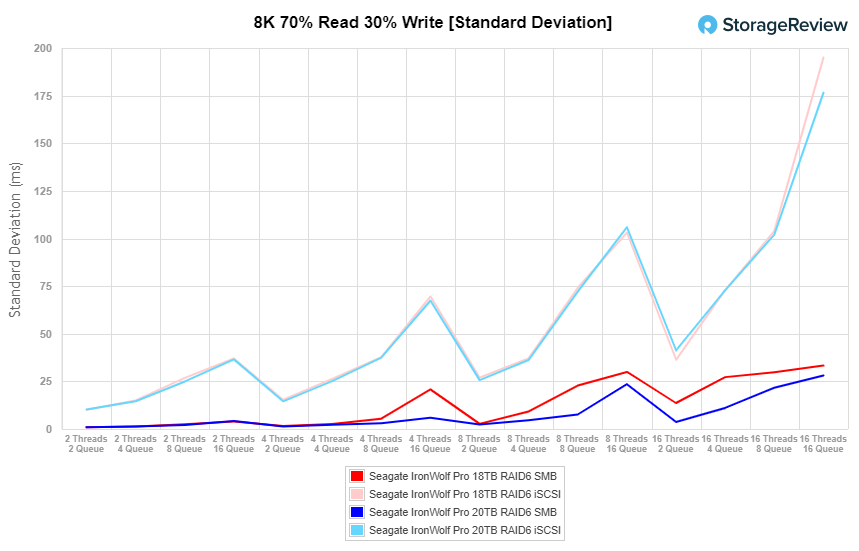 The new Seagate IronWolf Pro 20TB capacity is a solid addition to the market’s high-capacity data center offerings, joining with the Seagate Exos X20 as the industry’s highest-capacity commercial hard drives. This CMR-based drive is NAS-optimized with AgileArray, combining RAID reliability and compatibility for exceptional performance during heavy 24×7 NAS workloads. 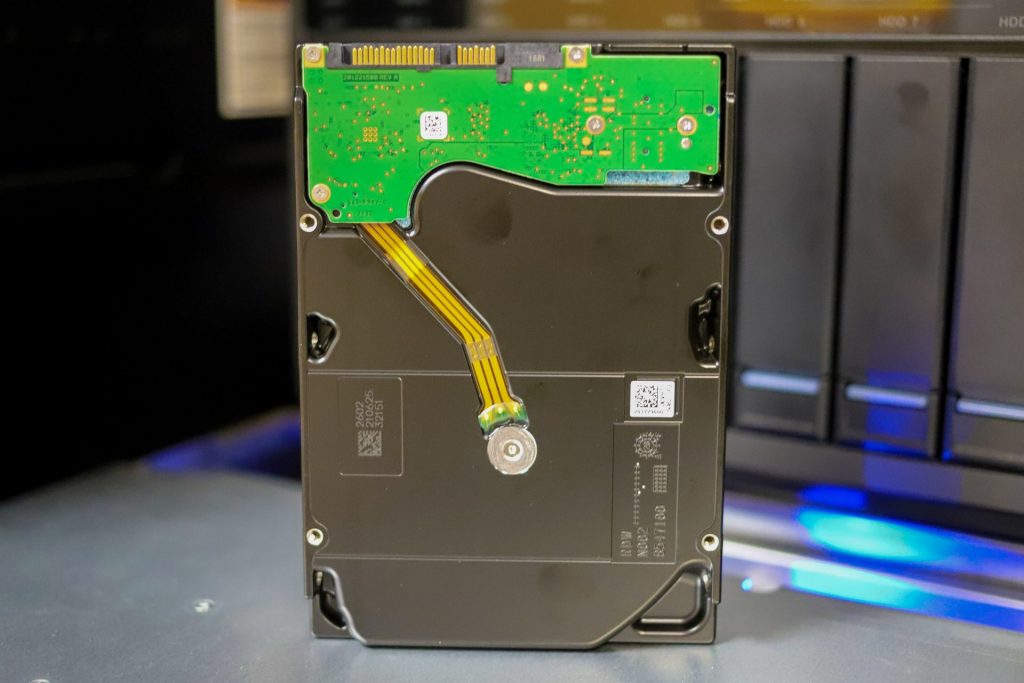 Looking at its performance results (which we tested using both iSCSI and SMB connectivity of eight drives in RAID6), the Seagate IronWolf Pro 20TB showed some solid numbers and an overall improvement over the 18TB model. During our FIO workloads, the new Seagate drive showed 4K random performance of 8,272 IOPS read and 1,026 IOPS write (iSCSI) and 9,431 IOPS read and 957 IOPS write (SMB).

Looking at workloads under 100% read/write activity 8K sequential throughput, the 20TB Seagate IronWolf Pro was able to reach 224,071 IOPS read and 106,912 IOPS write in iSCSI (an improvement over the 18TB model), while SMB saw 58,490 IOPS read and 44,902 IOPS write. In our mixed 8K 70/30 workload, which will demonstrate how performance scales in a setting from 2T/2Q up to 16T/16Q, the new Seagate drive started at 3,729 IOPS while ending at 3,262 IOPS in the terminal queue depths (SMB), while posting a range of 962 IOPS to 2,192 IOPS in iSCSI. This was also a slight boost in performance over the smaller capacity model. 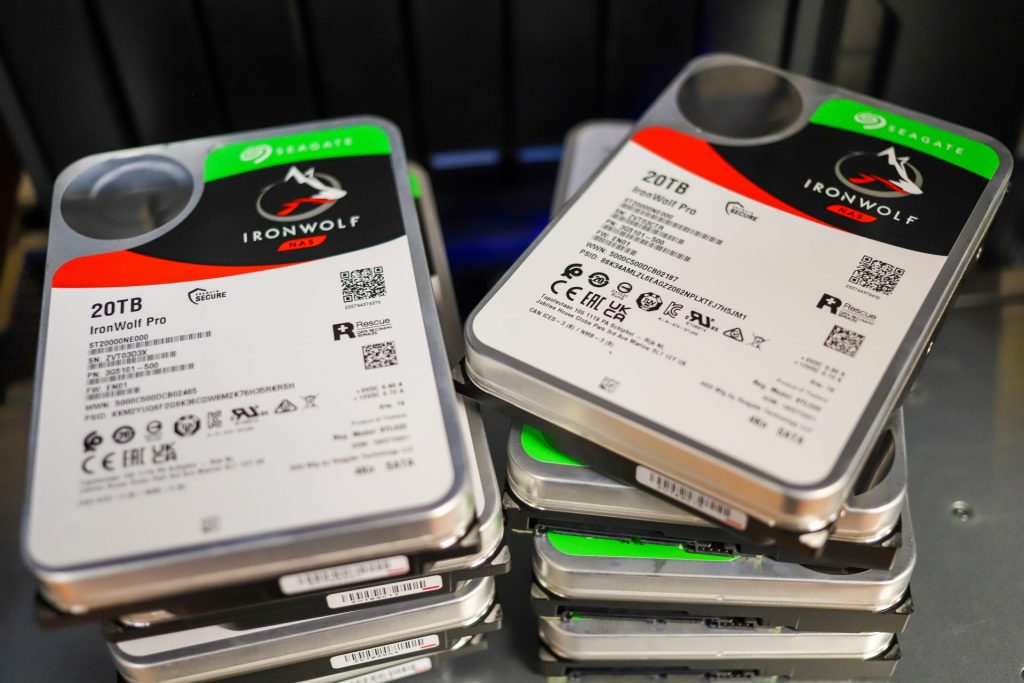 The increase in capacity is fairly significant, especially for organizations that leverage larger NAS systems (up to 24 bays); those extra TBs certainly add up in environments of this size. Coupling all of this with its solid performance (an overall improvement over the 18TB model), 300TB per year workload rating, RV sensors to compensate for environmental changes, and its 1.2 million hour MTBF makes the IronWolf Pro 20TB a great choice for those looking to get the most out of their capacity-driven NAS environments.