The Synology DS1813+ is an eight-bay NAS system in Synology’s DiskStation lineup of desktop storage appliances, offered as a successor to the Synology DS1812+ which we reviewed in early 2013. The DS1813+ offers four gigabit NICs which can be aggregated, and in addition to its maximum internal capacity of 32TB, the DS1813+ can manage up to 72TB of storage when used with two 5-bay DS513 expansion units. The DS1813+ offers straightforward configured for access via SMB/CIFS shares or iSCSI, which in conjunction with the DiskStation Manager operating system make the DS1813+ a highly adaptable storage platform for small and medium enterprises.

The Synology DS1813+ is an eight-bay NAS system in Synology’s DiskStation lineup of desktop storage appliances, offered as a successor to the Synology DS1812+ which we reviewed in early 2013. The DS1813+ offers four gigabit NICs which can be aggregated, and in addition to its maximum internal capacity of 32TB, the DS1813+ can manage up to 72TB of storage when used with two 5-bay DS513 expansion units. The DS1813+ offers straightforward configured for access via SMB/CIFS shares or iSCSI, which in conjunction with the DiskStation Manager operating system make the DS1813+ a highly adaptable storage platform for small and medium enterprises. 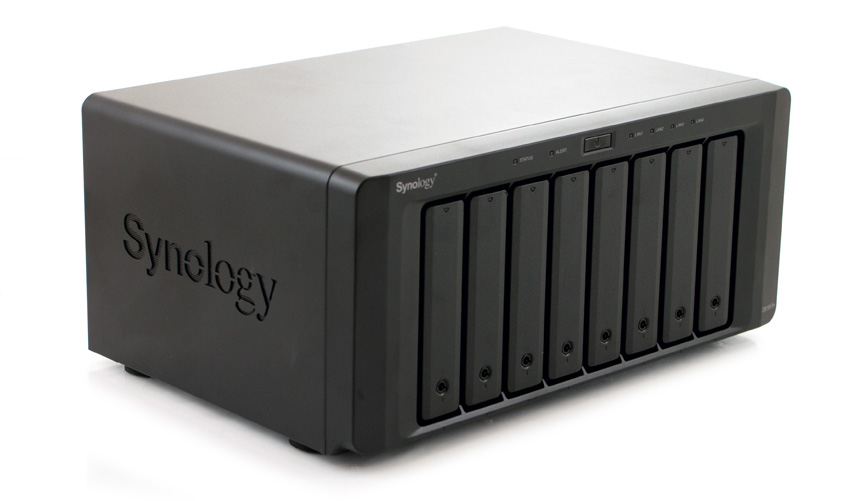 iSCSI support means that the DS1813+ can be configured as storage for virtualization environments including VMware, Citrix, and Hyper-V. In VMware environments, DS1813+ can offload storage operations via integration with vSphere 5 and VAAI. Synology High Availability (SHA) functionality transitions between members of a cluster of DiskStation servers to maintain availability during a failure. 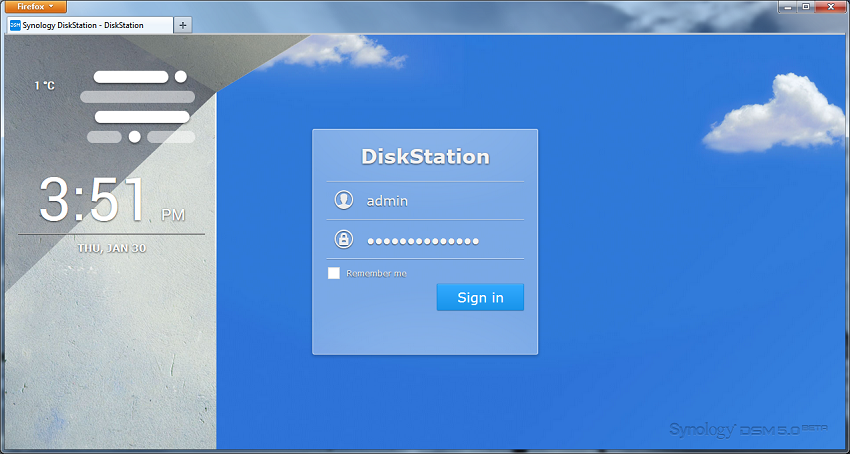 On the hardware side, the Synology DS1813+ features an Intel Atom dual core 2.13GHz processor and ships with 2GB of RAM in the form of two 1GB DIMMs, which can be upgraded by replacing with 2GB DIMMs. Screwless, hot swappable internal bays support 3.5-inch and 2.5-inch drives. Synology SD513 and DS213 expansion bays can be connected via eSATA, and its USB 3.0 and 2.0 ports can also be used to connect external drives, either as backup storage for the DS1813+ or be served as independent volumes. According to Synology, the DS1813+ consumes 75.2 watts in operation. 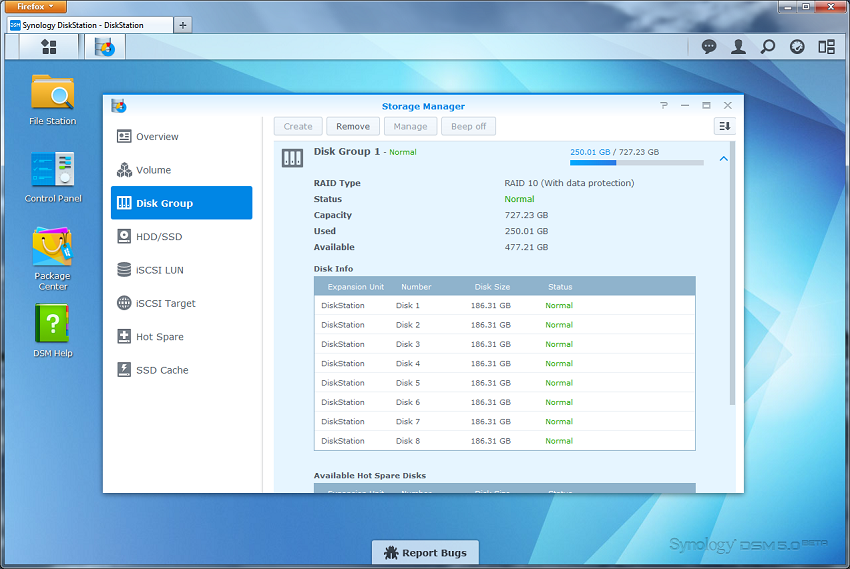 Synology’s DiskStation Manager (DSM) operating system is a key consideration when evaluating the DS1813+. DSM offers extensive core functionality with a proven management environment that is consistent across Synology’s NAS offerings. DSM’s advantages include a large user base, support for add-on applications, and a track record of incremental platform updates and upgrades. Though the current supported version of DiskStation Manager is 4.3, Synology recently launched a public beta for DiskStation Manager 5.0, which is listed as compatible with the DS1813+.

The DS1813+ features a solid-feeling metal chassis construction with LED indicators on the front for system status, alert messages, and network connectivity, alongside a system power button. Each drive bay also features an LED indicator and a lock. 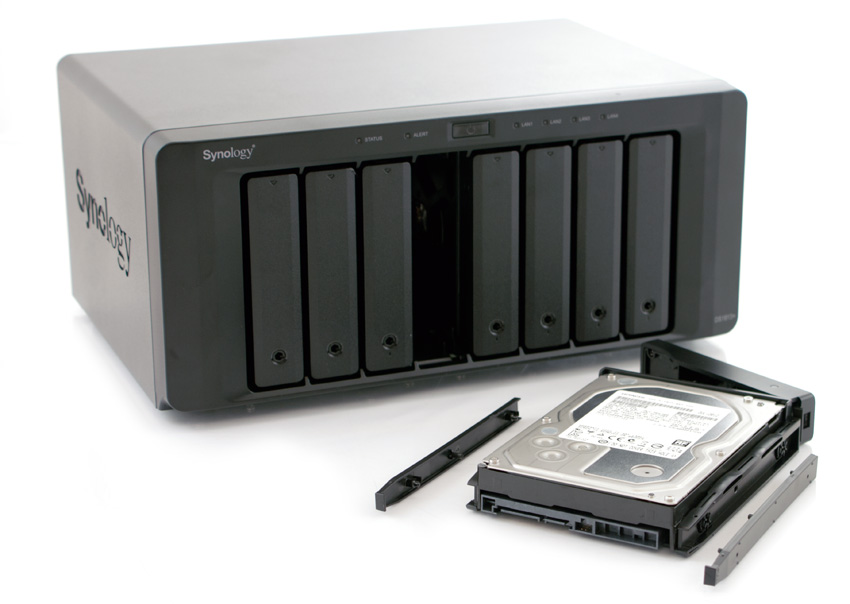 The rear of the DS1813+ incorporates a power connector, two USB 3.0 ports, and an eSATA port at bottom left. On the right, four USB 2.0 ports, four gigabit LAN ports, the second eSATA port, and a reset switch complete the rear interface. 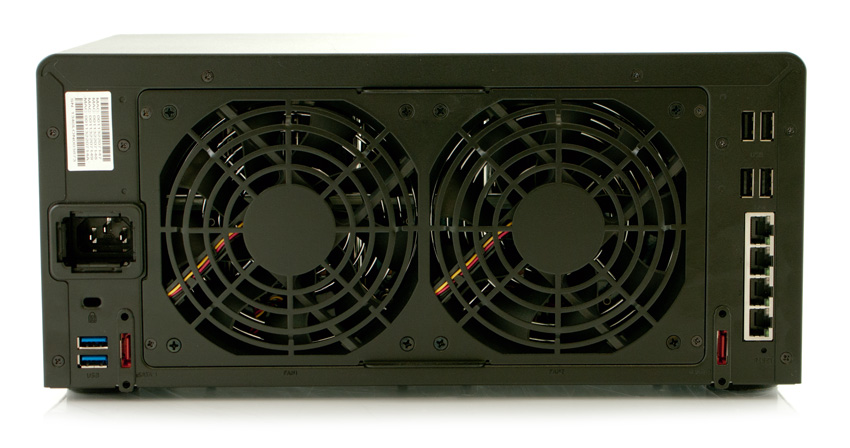 Synology engineered the DS1813+ chassis to allow its CPU to be passively cooled if necessary. When a fan does fail, other fans spin up to increase ventilation.

According to Synology, the DS1813+ has been able to reach 352.39 MB/sec reading and 211.88 MB/sec writing throughput as a RAID5 array in a Windows environment when using link aggregation. StorageReview’s review protocol will benchmark the DS1813+ with HGST Ultrastar 7K4000 and Seagate NAS HDDs in a RAID10 array to determine how the NAS performs with the kinds of hard drives frequently deployed with storage system like the DiskStation family. Each share will be allocated to a network interface with a dedicated IP address. We will also benchmark the DS1813+ with an array of Micron P400m SSDs, an enterprise MLC with balanced overall performance.

For this review, we will benchmark drive performance via both SMB/CIFS and iSCSI protocols with the drives in a RAID10 array. Both the Seagate NAS and WD Red are designed for NAS workloads. We conducted this benchmark on our Lenovo ThinkServer RD630 enterprise testing platform.

Our first benchmark gauges the performance of random 4k transfers comprised of 100% write and 100% read activity. In 4k throughput, the hard drives experienced their best write performance with SMB/CIFS transfers, where the HGST 7K4000 array reached 1,337 IOPs. The 7K400 array had the best read performance as well, as an iSCSI volume with 2,189 IOPs. An array of Micron P400m SSDs topped out at 200,005 IOPs 4k write and 199,933 IOPs read when configured for iSCSI.

This pattern of hard drive performance is also visible in the average latency results, where the HGST 7K4000 kept write latency to 191.32ms via SMB/CIFS and experienced better read latency via iSCSI at 116.91ms. The Micro P400m SSDs performed best via iSCSI with an average write latency of 12.79ms and an average read latency of 12.84. Notably, the Seagate NAS drive experienced latency trouble with read operations when configured for access via SMB.

The maximum 4k latency results give the Seagate NAS HDD an opportunity to demonstrate one of its strengths, where it almost matches the HGST 7K4000’s SMB/CIFS write performance of 1,245ms and beat out the HGST’s iSCSI read result with 1,307ms maximum latency.

Plotting standard deviation for the 4k latency results offers a means to visualize how consistent the latency results were within each of the categories during the benchmark. Between the two hard drives in our benchmark, the HGST 7K4000 comes away the winner, although its best performances remained split between the iSCSI and SMB/CIFS protocols throughout the 4k benchmark.

Doubling the transfer size to 8k, the HGST 7K4000 suffered a notably poor performance in the iSCSI configuration, and was neck and neck with the Seagate NAS via SMB/CIFS. The performance imbalance between protocols that the Micron P400m experienced with 4k transfers vanishes with the larger transfer size.

The next four charts are based on a protocol consisting of 70% read operations and 30% write operations with an 8k transfer size. The workload is then varied from 2 threads and a queue depth of 2 up to 16 threads and 16 queue.

iSCSI is the clear winner in throughput for the 8k 70/30 benchmark, and the HGST 7K4000 consistently outperforms the slower Seagate NAS. The chart of throughput results does not reveal any surprises, as each of the drives experience predictable increases in throughput as thread count and queue depth improve. 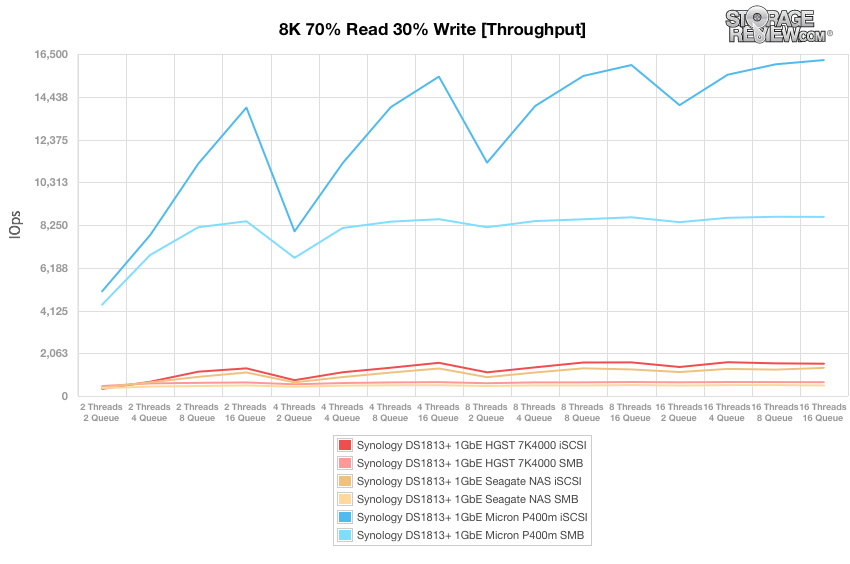 Average latency results show that iSCSI often experiences half of the average latency of the SMB/CIFS protocol with the HGST 7K4000, while the difference in latency is even more dramatic with the Seagate NAS array. The improvement of iSCSI performance over SMB is not as pronounced with the Micron P400m SSD, but is still clear. 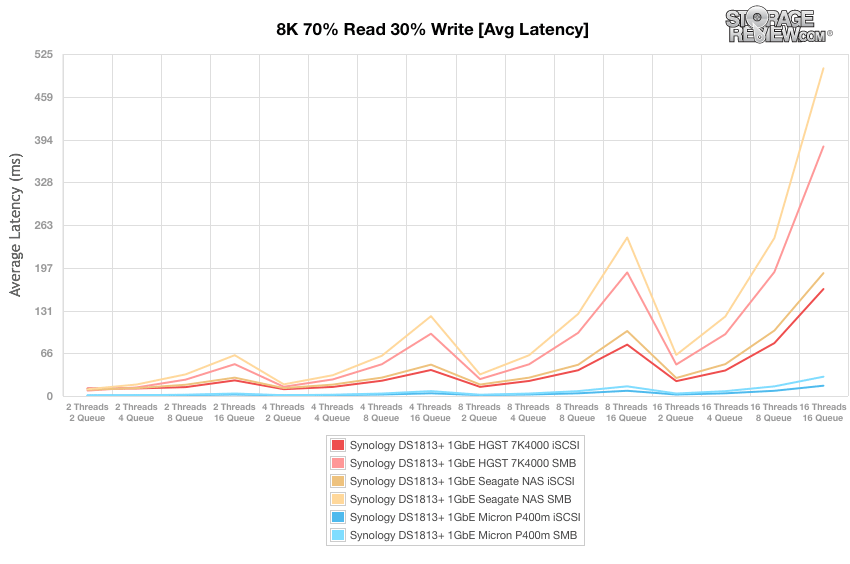 Maximum latency values can sometimes reveal trouble spots that are not apparent in the average values. The Micron P400m experienced an unexpected but slight slowdown at 8 threads and a queue of 16, but otherwise the maximum latencies fall within expectations. 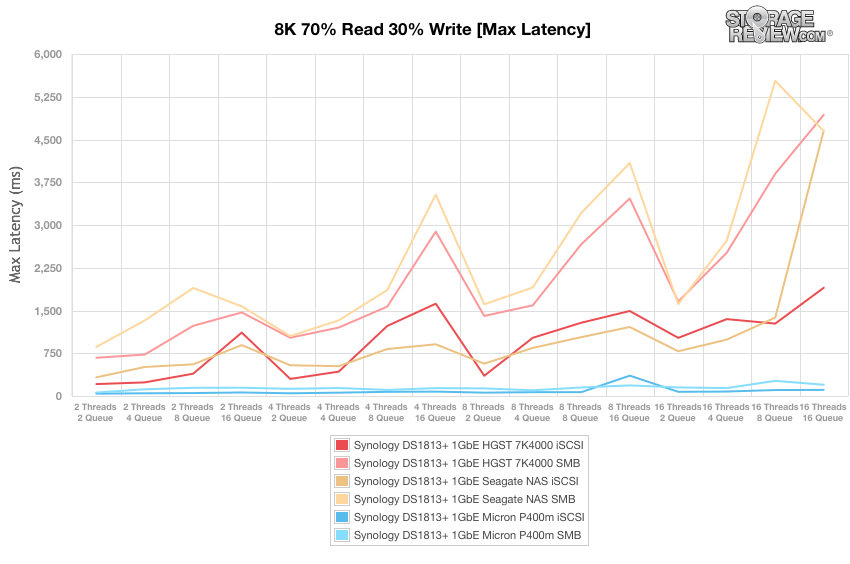 The standard deviation results for latency during the 8k 70/30 benchmark continue the pattern presented throughout the results from this protocol. iSCSI access provided the most consistent latencies across the board, with better performance from the HGST 7K4000 between the two hard drives. 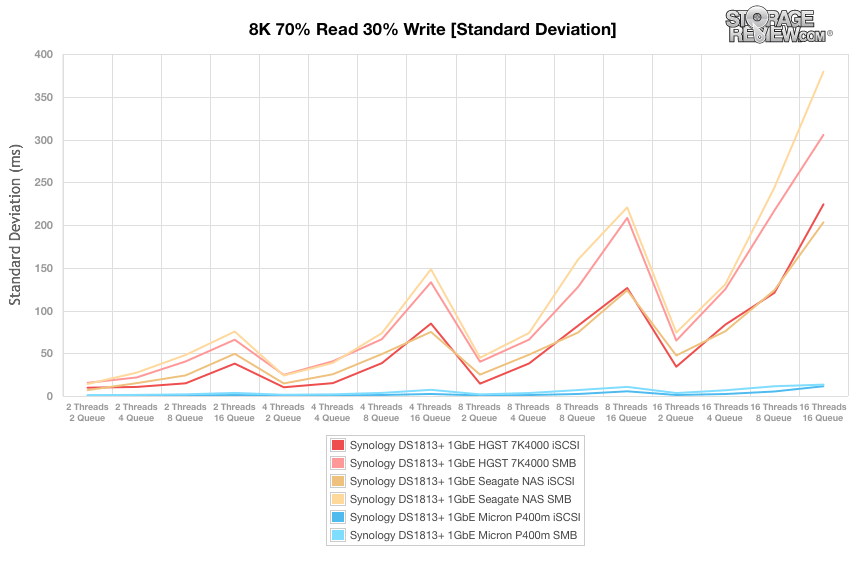 The final synthetic benchmark utilizes much larger 128k transfer sizes with 100% read and 100% write operations. Under these conditions, both hard drives experienced comparable throughput performance for write operations with both protocols. The Seagate NAS array is not able to keep pace with the HGST 7K4000 array for read operations when accessed via iSCSI but comes quite close via SMB/CIFS. The Micron P400m performs equally well on read operations via iSCSI and SMB, but achieves its best result of 346,784 IOPs via SMB.

Synology takes an incremental approach to updating its storage hardware and software platforms. The DS1813+ represents a solid step forward for the DiskStation family of desktop form-factor storage devices. With eight bays of internal storage and support for two expansion units, the DS1813+ can handle up to 72TB of raw storage and be configured to serve a wide variety of roles on the network via DiskStation Manager’s application library.

In our benchmarks with arrays of 7k and lower-power 5k hard drives commonly used in small and medium enterprise NAS deployments as well as a mainstream enterprise MLC SSD, the Synology DS1813+ provided a consistent performance profile which was notably better with iSCSI connectivity across the board for benchmarks with transfer sizes larger than 4k. Much existing Ethernet infrastructure for small and medium enterprise remains at gigabit speeds, so the lack of 10GbE connectivity is understandable. Quad gigabit NICs which can be aggregated with LAG or MPIO represents a compromise which makes sense for administrators who need to get more out of legacy infrastructure.

An investment in a DiskStation device such as the DS1813+ also means a commitment to the DSM management environment. Synology’s operating system exposes the platform’s broad functionality and has synergies in deployments which feature multiple Synology devices.