Western Digital’s Scorpio Blue 750GB notebook hard drive is unique in that it jams 750GB into a standard size notebook drive, leveraging two 375GB platters to get the job done. For notebook users craving more storage space, this latest version of the popular Scorpio Blue line offers 110GB more storage space than the next largest drive from any other manufacturer. But the extra space doesn’t mean much if the hard drive can’t perform – read on to see how the WD7500BPVT stacks up.

Western Digital’s Scorpio Blue 750GB notebook hard drive is unique in that it jams 750GB into a standard size notebook drive, leveraging two 375GB platters to get the job done. For notebook users craving more storage space, this latest version of the popular Scorpio Blue line offers 110GB more storage space than the next largest drive from any other manufacturer. But the extra space doesn’t mean much if the hard drive can’t perform – read on to see how the WD7500BPVT stacks up. 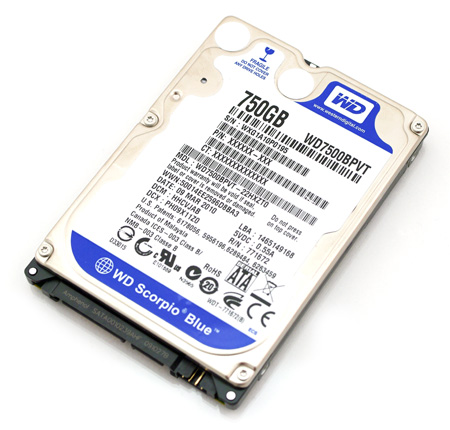 The Western Digital Scorpio Blue (WD7500BPVT) is a 2.5-inch hard drive with a SATA II interface. It is designed for use in standard notebook computer drive bays (9.5mm drive height).  It has a 750GB capacity, 5400RPM spindle speed, and 8MB data cache. The 750GB model has two platters, 375GB each. This hard drive also uses the new Advanced Format with 4K sectors, which can support much greater storage capacities.

It’s important to underscore the dual-platter design of the 750GB Scorpio Blue. In the past, to get increased capacity out of notebook drives, manufacturers had to go to a three platter design, increasing the hard drive case size in the process. These larger cases work well in gaming machines and other notebooks that have the space for them, but the thin and lights and most mainstream notebooks get left out. By increasing the platter density, Western Digital has managed to offer the highest capacity hard drive to date in the 9.5mm form factor. 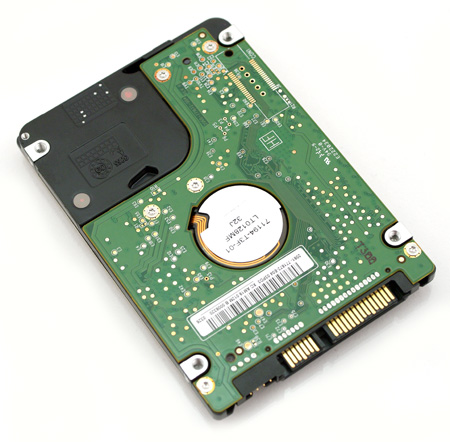 The 750GB Scorpio Blue looks nearly the same compared to the smaller 640GB model. Both drives share the same inside-facing circuit board layout with all components tightly pressed against the drive body. This allows the drive to act as its own heatsink for heat-generating components like the controller and memory. Another added benefit is the delicate components don’t risk being broken off from objects striking the PCB. 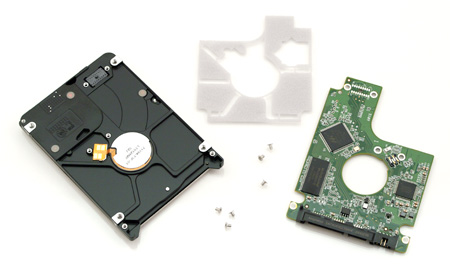 Taking the 750GB Scorpio Blue apart we see standard Western Digital construction methods. The PCB is insulated with a thin sheet of foam which acts as a mini shock absorber and prevents some pieces from shorting out against the metal case. The board itself is held onto the body with small Torx screws.

Once removed we see a simple layout containing a Marvell 88i9045-tfj2 controller (also seen on the 600GB VelociRaptor), a 32MB Windbond 400MHz DDR module, and a Texas Instruments SH6601AF motor driver. Cross referencing the Winbond site the memory module is indeed a 256Mb or 32MB module, much larger than the 8MB cache Western Digital claims on their website. 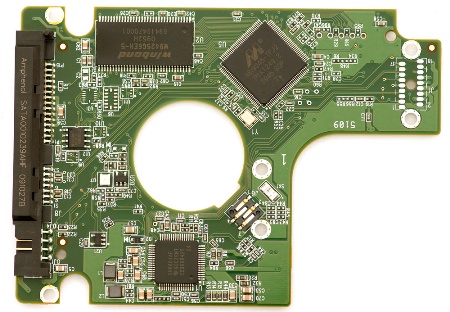 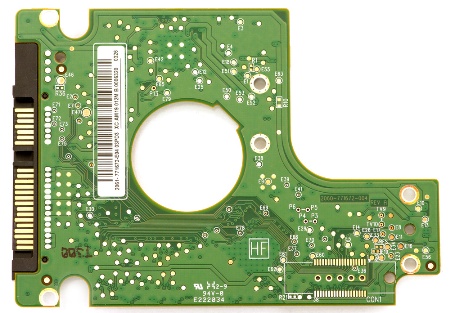 Using our controlled test environment, we ran a variety of benchmarks on the Scorpio Blue 750GB for this review. As this drive supported the newer Advanced Format with a 4K sector size we tested the drive with 4K-sector alignment and legacy 512-byte sector alignment. 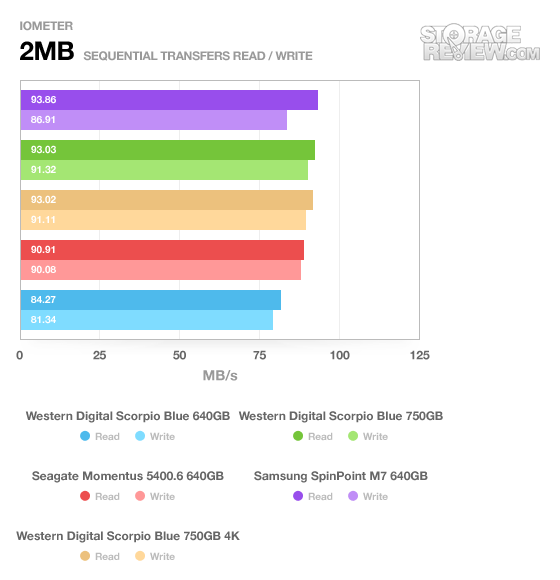 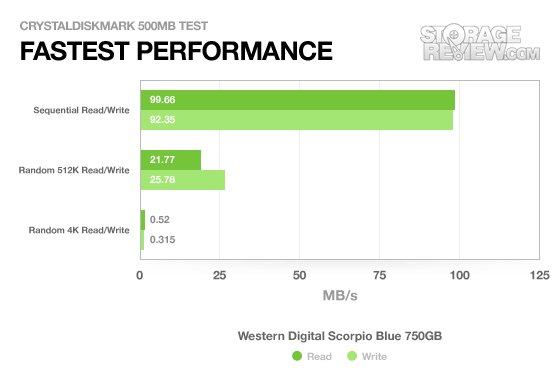 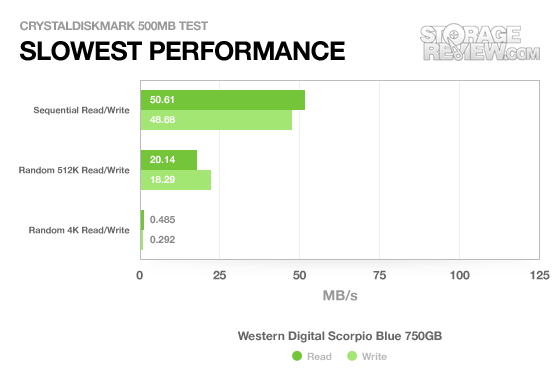 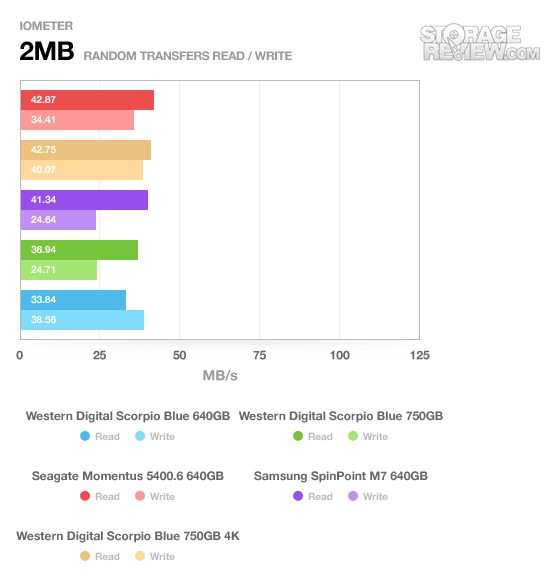 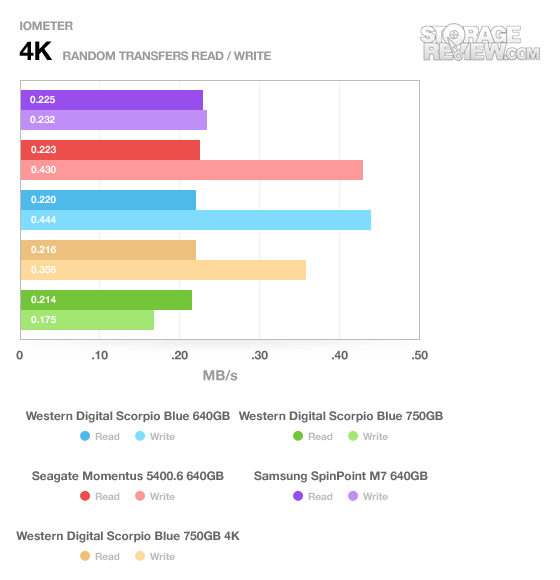 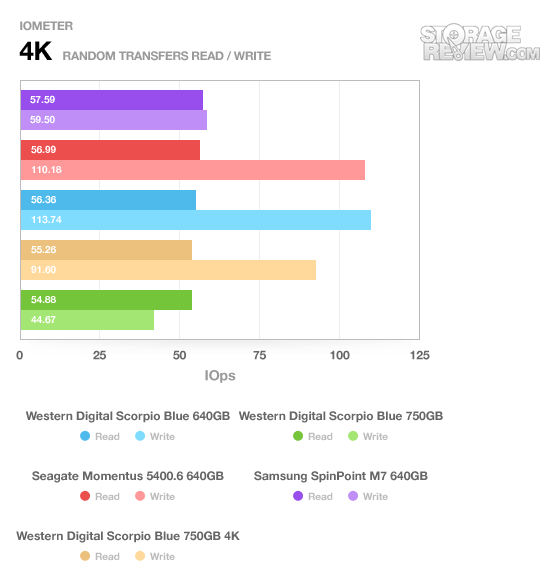 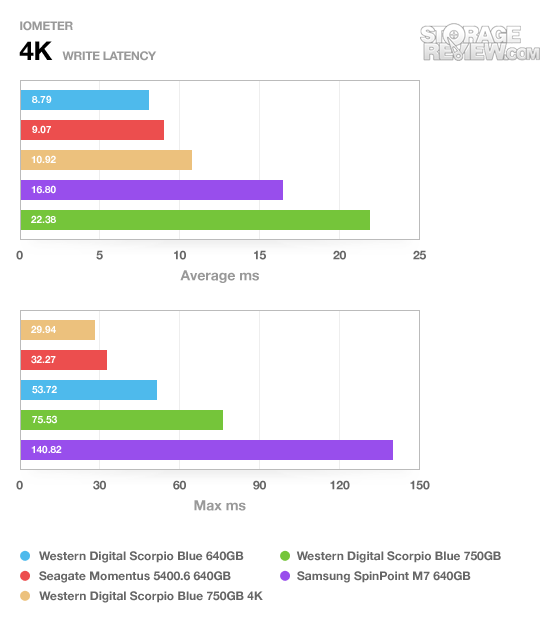 The Western Digital Scorpio Blue 750GB is able to hold its own in the 2MB tests compared to the 640GB Scorpio Blue, but starts to fall behind during 4K random activity. When unaligned for the Advanced Format (4K sector size) the 750GB drive performs quite poor, but when adjusted for the larger sector sizes it actually does very well. The 640GB Scorpio Blue still has an edge on it but as you can see average latency is more than cut in half.

To test the Western Digital 750GB’s performance under multi-user scenarios, we use IOMeter with standard server profiles including Database, Workstation, Webserver, and File Server. 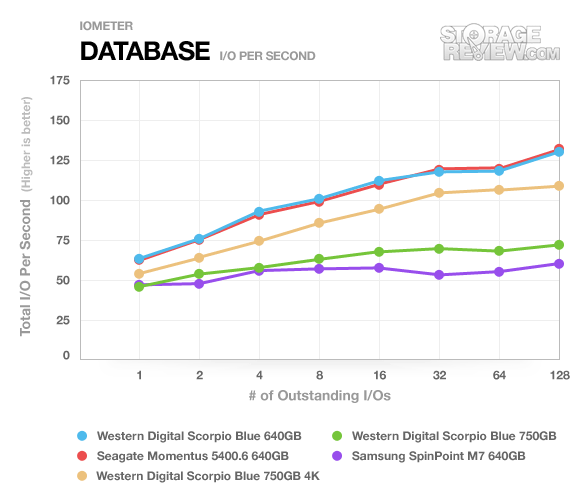 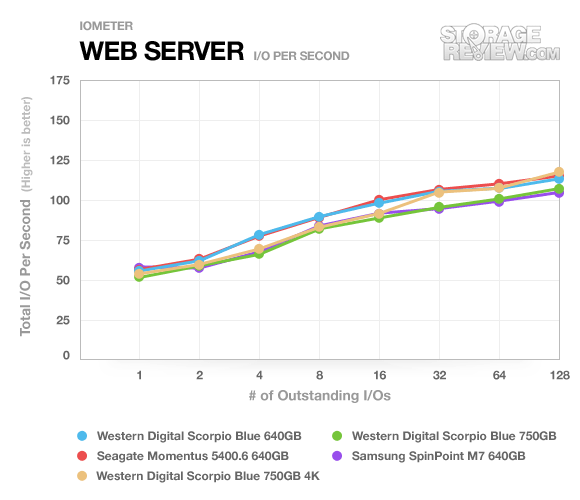 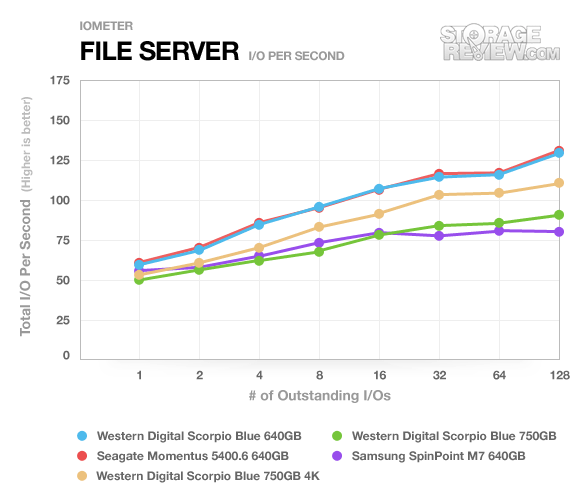 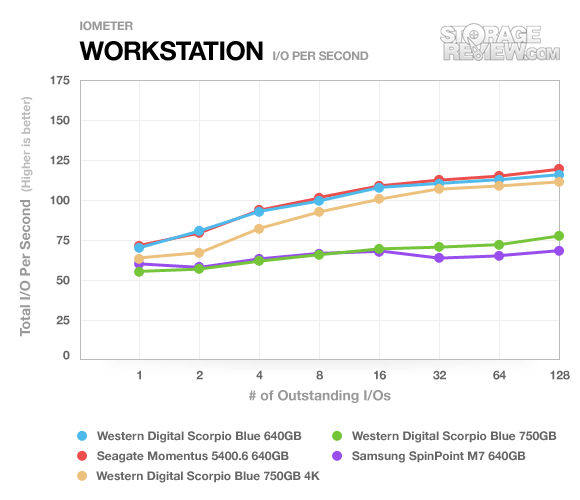 In the preceding tests we see again that when unaligned the Scorpio Blue 750GB falls significantly behind the non-Advanced Format Scorpio Blue. When properly aligned it gains back a lot of ground but still performs slower than the lower capacity model.

At this time our current traces are optimized for hard drives and SSDs with 512 byte sector alignment. As a result the Western Digital Scorpio Blue 750GB underperforms in this area. This level of performance would be seen on a system that doesn’t currently support 4K sectors. We will update this area soon when our 4K-compatible traces are completed.

The Western Digital Scorpio Blue 750GB actually does okay in power consumption compared to competitors. Its read/write and startup draw numbers are in line with competitors; its idle numbers and random read are noticeably lower. The observed differences are unlikely to make a noticeable impact on battery life. It is worthwhile to note that during our tests when running as a secondary drive the power management seemed overactive in that it would frequently initiate its sleep mode. When this happened the drive would park its head and spin down after only a few seconds. 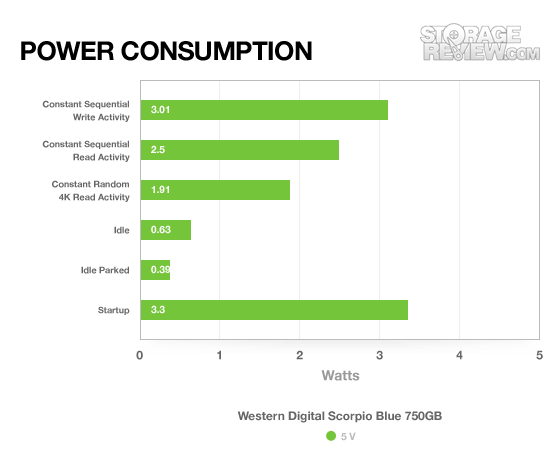 Western Digital provides a three-year limited warranty on the Scorpio Blue 750GB, which is on par with most competitors including Seagate. The company offers standard and advanced RMA replacements; the advanced replacement is free of charge with a credit card hold.

The Western Digital Scorpio Blue 750GB offers a huge boost in capacity compared to the 640GB model with the increase its increase in platter density. In our tests sequential performance was in-line with the previous generation drive but with increased random activity it fell behind even with 4K-alignment.

In circumstances where the operating system supports Advanced Format, the capacity boost of the Scorpio Blue 750GB comes as a welcome reprieve from the maximum capacity of 640GB to this point. It’s worthwhile to note as well that WD includes an alignment tool that works within Windows XP.

Those looking for the highest capacity 2.5″ hard disk drive should probably only look at the 750GB Scorpio Blue in environments where the operating system supports 4K sectors or WD’s align tool. Even then however, we noticed quirks and performance hits in random access times compared to the non-4k 640GB Scorpio Blue.