How to Upgrade Corsair SSD Firmware

Corsair and other SSD manufacturers attempt to perfect their product before it hits the market, and while generally successful, occasionally Corsair needs to release a firmware update to perform a fix or to even increase the SSD's performance. Corsair is attempting to simplify the process for users as much as possible, and in doing so now offers their Corsair Toolbox as a way to update a whole range of SSDs they offer, with more added as time progresses.

Corsair and other SSD manufacturers attempt to perfect their product before it hits the market, and while generally successful, occasionally Corsair needs to release a firmware update to perform a fix or to even increase the SSD's performance. Corsair is attempting to simplify the process for users as much as possible, and in doing so now offers their Corsair Toolbox as a way to update a whole range of SSDs they offer, with more added as time progresses. For now, Corsair Toolbox supports firmware updates for Force 3, Force GT, Force GS, Neutron, Neutron GTX, Nova2 (SandForce-based only), and the Accelerator line.

How do I Upgrade Crucial SSD Firmware?

The process for upgrading firmware is different depending on which manufacturer you're dealing with, but for Corsair, the process is fairly simple to complete. Starting off, to get the latest firmware for Corsair's SSDs, you'll need to go to their firmware update forum where you can download the Corsair SSD Toolbox. We noted above which SSDs are currently supported at the time of this publication, but for those with legacy drives, they can check back to see that status of the Toolbox, and they can go to that site to find their firmware outside of the Toolbox client. Corsair also lists firmware by SSD.

Either before or after you have downloaded the client, it's a good time to back up your important data. While firmware updates are typically non-destructive, and thus should have no effect on your data, it's still best to be safe. Occasionally, updates are destructive, though that is always listed to make sure users are made aware.

From this point, we loaded up the Corsair Toolbox. While the GUI isn't as refined as some of the other SSD manufacturers, it does get the job done while providing plenty of bonus functionality. 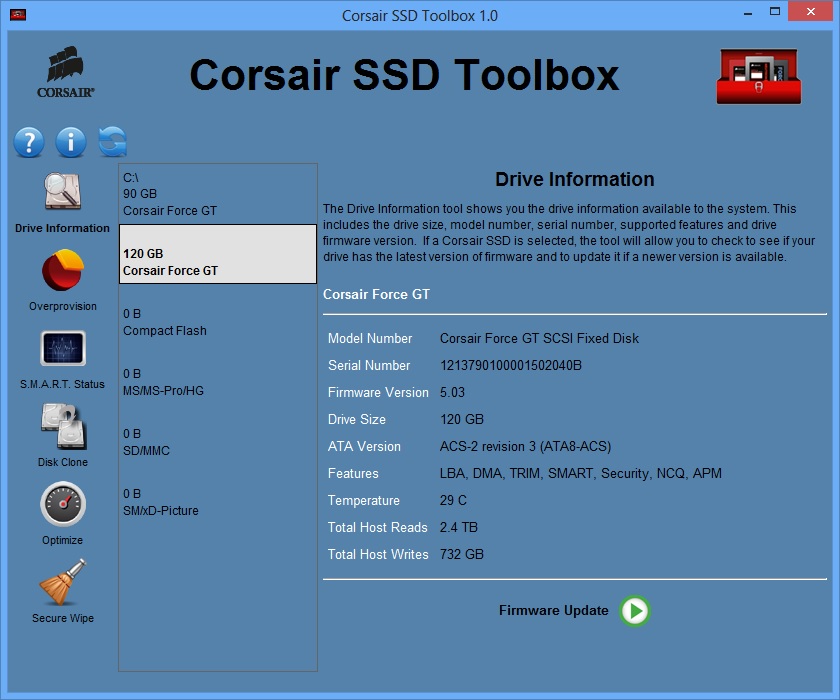 For instance, users can perform a Secure Wipe, optimize the drive by auto-scheduling TRIM, check the drive information or SMART status, and overprovision it. You'll notice an option to clone the SSD, but it isn't yet available in this release. With our two Corsair Force GT SSDs installed, we were ready to perform the firmware update.

When you click on firmware update, Corsair then provides an option that enables you to check for firmware updates. The client will show your current firmware version (in our case 5.03), and then it will also list the firmware to which you can update (here, v.5.05). Download the update, and you're ready to go, pending Corsair's warning to backup data. 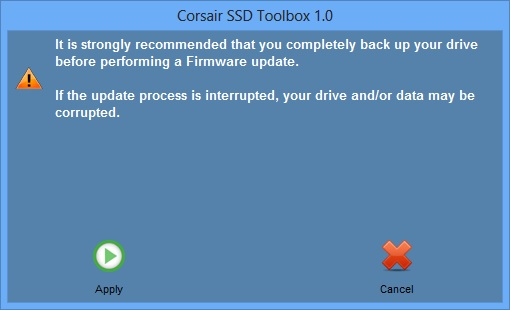 Applying the firmware takes about 5-10 seconds, and then it is complete. Some clients we've used will auto-restart your system immediately (with warning) or after twenty seconds. Others might allow users to manually restart the system when they are ready (perhaps after savings open files). Corsair's client said the process had completed, but it also showed the firmware as 5.03 (the pre-update version). We assumed we needed to power cycle the SSD, so we turned off the machine. When we turned it back on, it showed the updated version of firmware, 5.05, and we knew the process was finished.

While Corsair's firmware update client isn't the most graphically pretty we've ever seen, it does accomplish the task of providing users with a simple process by which they can update their Corsair SSD firmware quickly. On top of that, it provides Secure Wipe and other features that make it more valuable. Furthermore, when Disk Clone is ready, that'll be a very handy option. While it would be nice to have some direction provided at the end of the process to assure users that the upgrade was a success and that they should just power cycle the SSD to see the result in the client, the overall simplicity of the process was superb.

How to Upgrade SSD Firmware

How to Upgrade SanDisk SSD Firmware