Today VMware has made some major announcements from expanding Tanzu to releasing vSAN 7. In another major announcement the company is releasing the latest version of vSphere with VMware vSphere 7. While there are several new features and capabilities announced, the key feature is native support for Kubernetes, allowing the ability to run containers and VMs on the same platform.

Today VMware has made some major announcements from expanding Tanzu to releasing vSAN 7. In another major announcement the company is releasing the latest version of vSphere with VMware vSphere 7. While there are several new features and capabilities announced, the key feature is native support for Kubernetes, allowing the ability to run containers and VMs on the same platform. 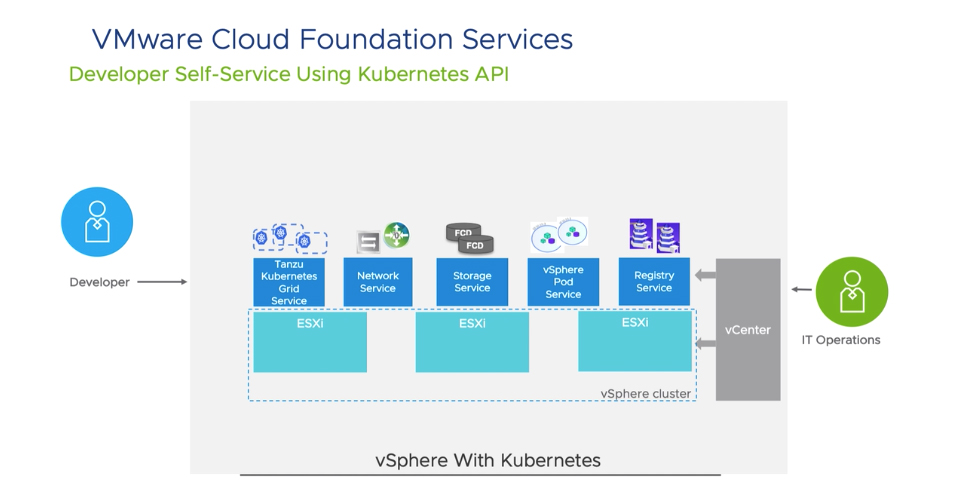 VMware vSphere is the company’s virtualization platform. The latest version sees a rearchitecting of the platform to add in new innovations. Aside from the addition of native support for Kubernetes, the new version focuses on improving developer and operator productivity. vSphere 7 also powers VMware Cloud Foundation in a secure, high performance, and resilient way.

As with vSAN 7, VMware vSphere 7 has also simplified lifecycle management. Cloud consumption models are very popular and as more are leveraged things can get complicated. Noting this, vSAN looked to either fully automate or simplify the lifecycle management of the infrastructure software and hardware firmware. The new update allows users to seamlessly manage the lifecycle of the infrastructure using a desired state paradigm. VMware also added vCenter Server profiles to provided desired state configuration management for vCenter Server instances.

VMware vSphere 7 has increased security which is more important than ever in both the data center and that cloud. It has achieved this through the introduction of remote attestation for sensitive workloads using the new vSphere Trust Authority. vSphere provides secure vCenter Server authentication using external Identity Federation. The latest version also supports Intel Software Guard Extensions to allow SGX extensions to user applications.

What is near and dear to our hearts at StorageReview is always performance. vSphere is looking to innovate in the performance area by letting users host large workloads with an improved Distributed Resource Scheduler (DRS). The new approach uses the VM DRS score for hosts as the metric to decide placements. vSphere 7 Persistent Memory is supported on certain hardware that can deliver enhanced application performance. VMware has updated vMotion to improve performance resulting in live vMotion for databases and mission critical workloads. vSphere supports NVIDIA GPUs that can benefit AI/ML workloads as well.

One of the big updates is a common platform for running both containers (and Kubernetes) and VMs. Siloing different technologies into stacks can prevent adoption or force users to prioritize one over the other. By natively supporting Kubernetes in vSphere, companies can consolidate resources and environments while taking advantage of both technologies. According to VMware, vSphere 7 enables the DevOps model with infrastructure access for developers through Kubernetes APIs. This includes the Tanzu Kubernetes Grid Service. User can also choose the vSphere Pod Service if they don’t need full Kubernetes compliance.

vSphere with Kubernetes is available through VMware Cloud Foundation 4 with Tanzu.