Today VMware Inc, announced updates to its two most popular solutions, VMware vSphere 7 and vSAN 7 Update 2. The updates are aimed to help IT teams support new and existing applications with infrastructure that is developer and AI-ready; scales without compromise; boosts infrastructure and data security, and simplifies operations. More specifically vSphere 7 U2 is exclusively certified by NVIDIA for NVIDIA AI Enterprise Software Suite. vSAN 7 U2 has enhanced the HCI Mesh to help with dynamic business and workload demands.

Today VMware Inc, announced updates to its two most popular solutions, VMware vSphere 7 and vSAN 7 Update 2. The updates are aimed to help IT teams support new and existing applications with infrastructure that is developer and AI-ready; scales without compromise; boosts infrastructure and data security, and simplifies operations. More specifically vSphere 7 U2 is exclusively certified by NVIDIA for NVIDIA AI Enterprise Software Suite. vSAN 7 U2 has enhanced the HCI Mesh to help with dynamic business and workload demands.

VMware’s vSphere and vSAN are solutions we are very familiar with at StorageReview. In fact, we leverage them for several, if not most of our tests. In fact, with vSAN we’ve done various reviews including all-flash and Optane-based. New features are always fun to dive into to see what they do.

First up, let’s look at vSphere 7 U2. The main thrust around this update of vSphere centers around AI-ready infrastructure. AI is the next step in IT evolution and is gaining speed each year. What better partner to have in AI than NVIDIA? NVIDIA is known for the GPUs (though they offer compute and networking now as well). GPUs are being leveraged more and more in AI as they are able to process multiple computations simultaneously and the larger number of cores allows for the computation of multiple parallel processes. Today the two companies are expanding on their current partnership with an AI-Ready Enterprise platform that is said to combine the flexibility of VMware vSphere and the innovation of NVIDIA AI Enterprise.

As stated, the two are releasing the NVIDIA AI Enterprise Software Suite that supports VMware vSphere 7 U2. The product is said to enable scale-out, multi-node performance, and compatibility for a vast set of accelerated CUDA applications, AI frameworks, models, and SDKs for the hundreds of thousands of enterprises that use vSphere for server virtualization. This solution will support AI researchers with the performance and tools they need while allowing IT to keep using the familiar vSphere tools they are used to. 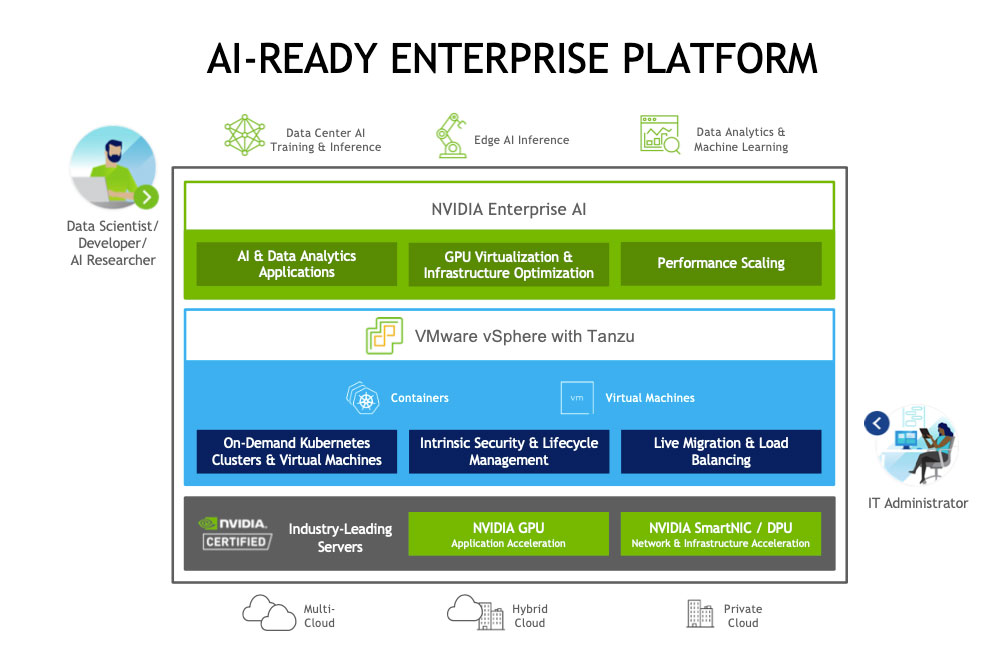 Putting on our NVIDIA hat for a moment, the company claims its new NVIDIA Enterprise AI is a suite of enterprise-grade AI tools and frameworks that optimize business processes and boost efficiency for a broad range of key industries, including manufacturing, logistics, financial services, retail, and healthcare. The tools provided should make it easier (whatever that may mean in the AI landscape) for AI development across projects ranging from advanced diagnostics, smart factories, fraud detection, as well as many other use cases. The solution is also said to ease deployment of AI applications overcoming potential failures from manual provisioning and managing different applications and infrastructure software that can often be incompatible.

The specific benefits of the NVIDIA Enterprise AI running on vSphere are the ability to avoid silos of AI-specific systems, mitigate the risks of shadow AI deployments, and the ability to leverage any of the NVIDIA-Certified systems from vendors like Dell Technologies, HPE, Lenovo, and Supermicro. These solutions can leverage the performance of the newer NVIDIA A100 GPUs for a variety of use cases.

Updates to VMware vSAN 7 Update 2 include:

Other benefits in vSphere include an update to the recently announced vSphere with Tanzu. The updates announced today include the delivery of a faster, more scalable, and secure application experience by including VMware NSX Advanced Load Balancer Essentials as part of vSphere with Tanzu. This load balancing can be especially nice for customers with Kubernetes clusters with cloud-native automation. VMware states that this gives these customers a seamless upgrade path to the full capabilities of the NSX Advanced Load Balancer Enterprise Edition. Another addition here to help with Kubernetes, the new version of vSphere with Tanzu’s supervisor has the latest version, Kubernetes 1.19. 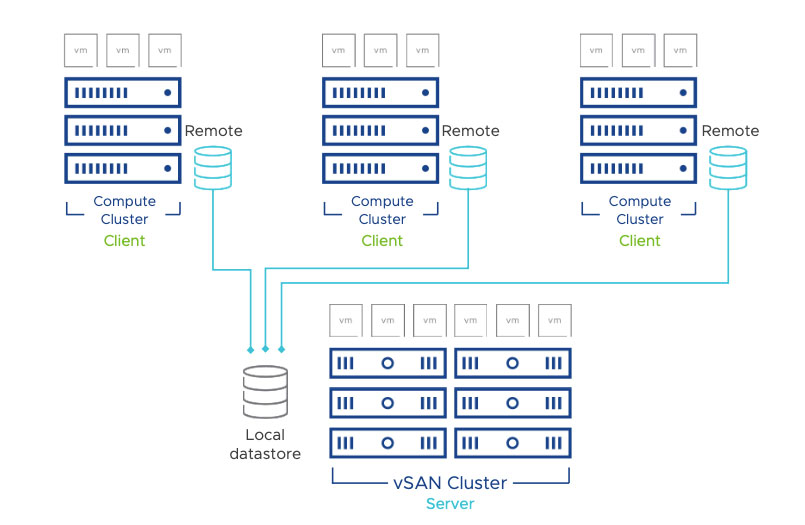 Let’s move onto hyperconverged with the VMware vSAN 7 U2. Now with over 30K customers, the latest update delivers an enhanced HCI Mesh. This builds on the vSAN 7 U1 that took a software-based approach for disaggregation of compute and storage resources. The latest update moves beyond traditional vSAN enabling compute-only clusters or non-HCI clusters to remotely use storage from a vSAN cluster within a data center. This allows users to benefit from the simplicity of vSAN while scaling compute and storage independently to meet specific needs.

Other specific vSAN 7 U2 features include new capabilities to better support various physical topologies. These capabilities are said to include integrated DRS awareness of stretched cluster configurations for more consistent performance in failback as well as vSAN file services support for stretched clusters and 2-node clusters. For performance, vSAN can be delivered over Remote Direct Memory Access (RDMA) and enhancement to RAID 5/6 erasure coding that improves CPU utilization and app performance for certain workloads.

Both have new security features. With vSphere, VMware is looking to improve security for container-based applications with the introduction of Confidential Containers for vSphere Pods on AMD hardware using Secure Encrypted Virtualization-Encrypted State (SEV-ES). For security on the traditional VM environments, the update includes vSphere Native Key Provider, which is said to deliver basic key management server (KMS) capabilities making it much easier for customers to enable encryption and advanced security features out of the box. vSphere 7 U2 includes FIPS validation for federal compliance audits while vSAN 7 U2 includes FIPS 140-2 validation of the cryptographic module for data-in-transit encryption to meet strict government requirements.

With new features can come new complexities. To simplify customer operations both vSphere and vSAN offer features to simplify their operations. vSphere Lifecycle Manager now supports desired image seeding as well as lifecycle management of vSphere with Tanzu clusters, which includes updating vSphere with Tanzu (including the NSX-T networking and Kubernetes layers) in a non-disruptive fashion. vSphere 7 U2 also enhanced ESXi Quick Boot with suspend to memory, to reduce boot times and maintenance windows. vSphere has increased its ability to work with PMEM that in turn increases high availability ideal for workloads such as SAP HANA. vSAN also supports vSphere Proactive High Availability. According to VMWare, this allows the application state and any potential data stored can be proactively migrated to another host, helping to avoid data loss on degraded hardware and offering better availability for workloads.