The ADATA SWORDFISH is the company’s latest consumer-grade SSD. Featuring the PCIe Gen3x4 interface via the usual M.2 2280 form factor, the Swordfish is equipped with 3D NAND Flash and comes in capacities ranging from 250GB to 2TB. Like most ADATA consumer drives, the company focuses more on price over performance (specifically in writes), which allows those with a small budget to upgrade their system to the speedy NVMe interface. The ADATA Swordfish certainly falls in this category.

The ADATA SWORDFISH is the company’s latest consumer-grade SSD. Featuring the PCIe Gen3x4 interface via the usual M.2 2280 form factor, the Swordfish is equipped with 3D NAND Flash and comes in capacities ranging from 250GB to 2TB. Like most ADATA consumer drives, the company focuses more on price over performance (specifically in writes), which allows those with a small budget to upgrade their system to the speedy NVMe interface. The ADATA Swordfish certainly falls in this category. 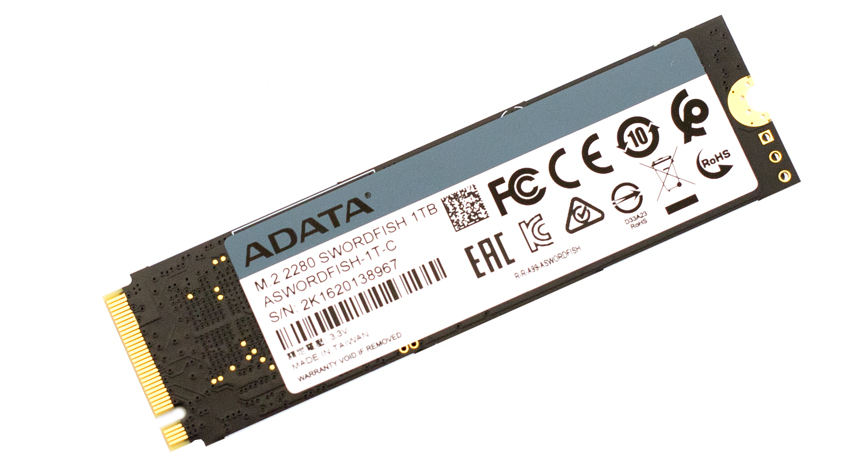 ADATA has equipped the their new SSD with LDPC (Low-Density Parity-Check) error correcting code technology support, which allows the drive to detect and fix errors to help promote data integrity and therefor an extended lifespan. In addition, it features the usual AES 256-bit encryption to help safeguard data via password-protection.

Performance-wise, the ADATA Swordfish is quoted to deliver read and write speeds up to 1,800MB/s and 1,200MB/s, respectively, while random 4K performance is expected to reach up to 180,000 IOPS in both read and writes. The Adata Swordfish also comes with a nice-looking etched aluminum heatsink, which is something you don’t often see on consumer drives. This will certainly help it stay cool during intensive tasks like gaming or video encoding.

Backed by a 5-year warranty, the Adata Swordfish comes in capacities of 250GB, 500GB, 1TB, and 2TB. We will be looking at the 1TB model for this review.

Here, we see the ADATA Swordfish with a score of 3,019.1 seconds, which ranked near the bottom of the pack just behind the WD Black drive. 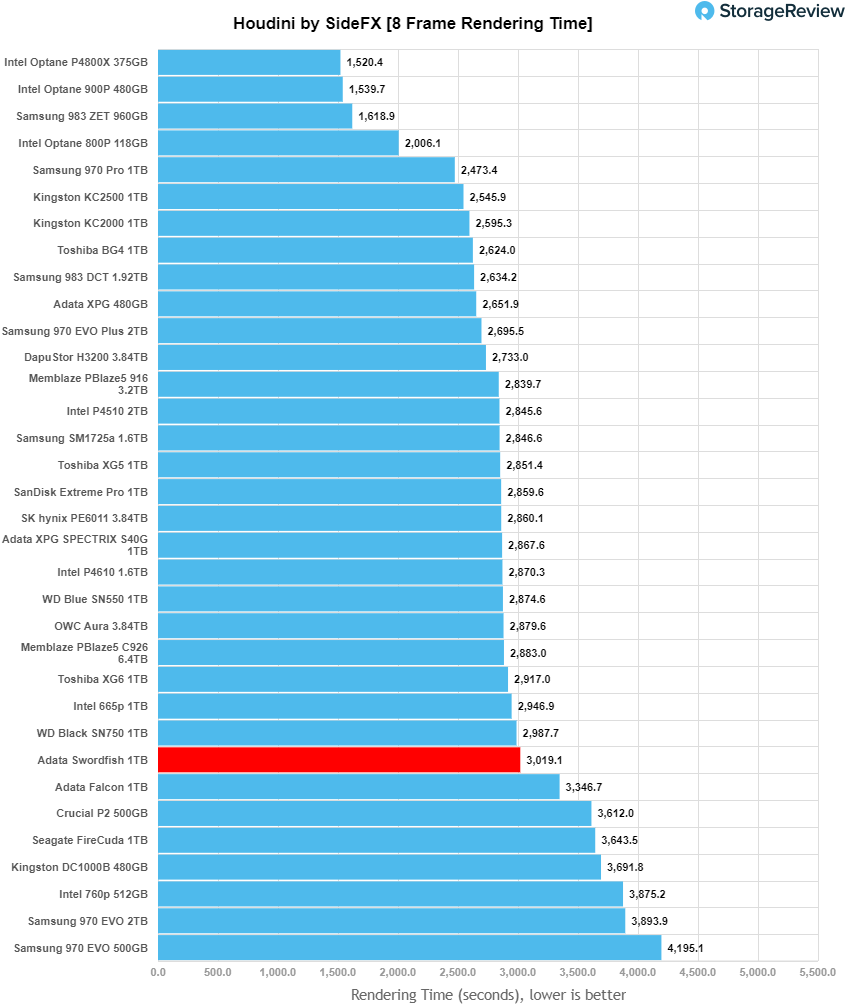 For 4K performance, the ADATA Swordfish was the only drive that couldn’t stay below a millisecond throughout the test, which occurred roughly around just past the 100K mark. The drive peaked at just 106,256 IOPS with a very high latency of 1,073µs.

For 4K random write, you can see that the ADATA Swordfish basically stopped performer soon after we started the test, reaching a peak of just 9,710 IOPS at a latency of 13,191µs. The other ADATA drive followed suit.

With 64K sequential performance, the ADATA Swordfish showed performance under 1 millisecond throughout the test. It went on to peak at 26,768 IOPS (or 1.68GB/s) with 596µs.

The ADATA Swordfish continued to show slow write performance when with 64K sequential, peaking at just 2k IOPS (or 130MB/s) at 7,984ms.

Next, we looked at our VDI benchmarks, which are designed to tax the drives even further. Like in the tests above, the Adata drives really struggled. This is unsurprising, as lower end drives usually perform very poorly during write workloads in our tests. Regardless, these tests include Boot, Initial Login, and Monday Login.

In Boot, the ADATA Swordfish showed a peak of 35,679 IOPS with a latency of 972.9µs before it took a hit in latency and IOPS at the end.

Looking at our VDI Initial Login told a similar story, as the ADATA Swordfish showed a peak of 5,106 IOPS with a latency of 563µs.

Finally, in our last test, VDI Monday Login showed the ADATA Swordfish with a peak IOPS at around 8,086 IOPS with just a hair under 2ms in latency before experience another spike in performance at the end of the test.

The ADATA Swordfish is an entry-level NVMe SSD that supports the PCIe Gen3x4 interface via the M.2 2280 form factor. It is outfitted with 3D NAND Flash and is available in capacities up to 2TB. The ADATA Swordfish also features Low-Density Parity-Check error correcting and the usual AES 256-bit encryption technology. As demonstrated in our performance charts (specifically referring to its write performance), the Swordfish is only meant as an upgrade for those looking for an affordable NVMe drive to install their OS from a SATA-based HDD or SSD, or as an inexpensive supplemental storage solution for PC games.

Though these results couldn’t keep up with the other tested consumer drives, it was expected. Entry models like the ADATA Swordfish tend to perform very poorly during our write workloads, which is why you saw IOPS drops and latency spikes all over the place in our charts. ADATA’s consumer line is focused on building affordable drives with decent read performance at a lower cost than SSD lines like the Samsung EVO. The 250GB model is priced at just $40, while the Samsung EVO Plus goes for roughly $75 as of the date of this review. However, the 1TB model is currently $115 roughly $75 lower than the Samsung EVO Plus 1TB (though, it is currently on sale). So if performance is not the main goal the price may be right for day to day users.

The Impact of Storage and GPU on AI Workloads