The ADATA FALCON is an M.2 SSD that is built around high performance, or “pro-formance” as they clumsily said. The drive comes in a fairly wide capacity range, 256GB up to 2TB. The M.2, 2280, form factor makes it a fit for desktops or notebooks. The main use cases for the ADATA FALCON are photo editing, industrial drawing, and programming.

The ADATA FALCON is an M.2 SSD that is built around high performance, or “pro-formance” as they clumsily said. The drive comes in a fairly wide capacity range, 256GB up to 2TB. The M.2, 2280, form factor makes it a fit for desktops or notebooks. The main use cases for the ADATA FALCON are photo editing, industrial drawing, and programming.

The drive is said to be built around performance with quoted speeds of 3.1GB/s read and 1.5GB/s write and a 180K IOPS throughput. The drive leverages the PCIe Gen3x4 (NVMe 1.3) interface to as well as SLC caching, and Host Memory Buffer to hit these high numbers. The drive comes with a pretty nifty aluminum alloy heatsink to keep it cool and stable. 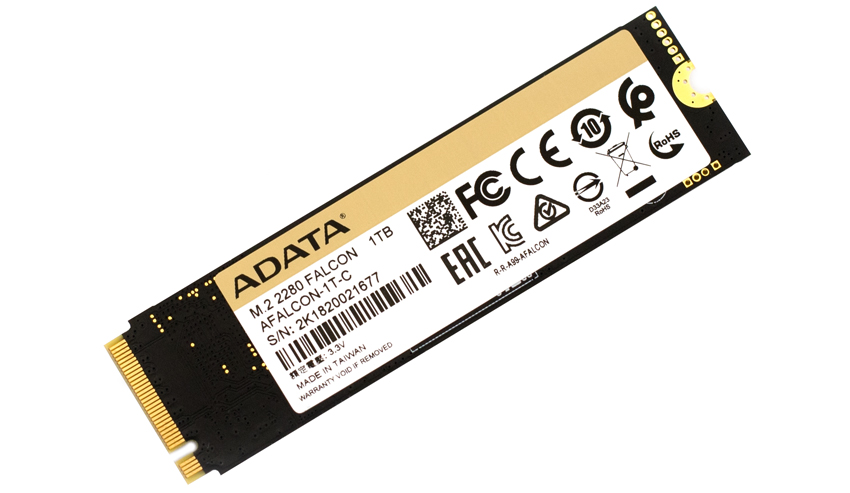 Here, we see the FALCON hit 3,346.7 seconds placing it near the bottom but still ahead of six other drives. 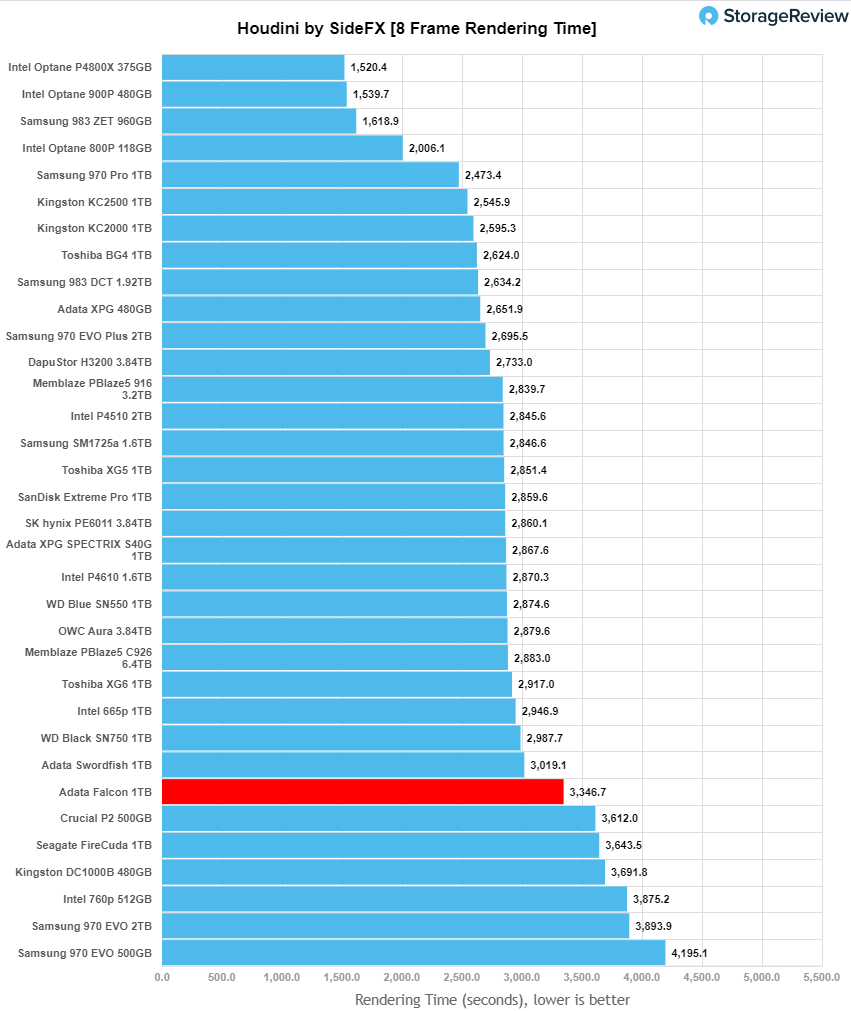 For 4K random read performance, the ADATA FALCON came up in the back of the pack with a peak performance of only 26,196 IOPS at a latency of 674.4µs.

Looking next to 4K random write performance the FALCON was able to beat out the SWORDFISH only as it peaked at 12,408 IOPS at 10.3ms for latency.

64K write saw slightly better placing, second to last, with a peak score of about 3,500 IOPS or about 220MB/s at a latency of 4.5ms before dropping off in performance and shooting up in latency.

Next, we looked at our VDI benchmarks, which are designed to tax the drives even further. Here you can obviously see that all of these drives struggled, though this was expected due to their focus on price point and read performance only. These tests include Boot, Initial Login, and Monday Login. That said, the Boot test showed the FALCON to be in last, yet again, at a peak of 15,119 IOPS at a latency of 2.22ms before dropping off.

VDI Initial Login gets a bit harder to read but here the FALCON peaked at 9,396 IOPS at a latency of 3.2ms.

Finally, the VDI Monday Login had the FALCON place last again with a peak score of 3,097 IOPS at a latency of 404µs after coming down from a larger peak.

The ADATA FALCON is the company’s “pro-formance” M.2 NVMe SSD. The drive comes in capacities up to 2TB and has quoted speeds of upward of 3.1GB/s and 180K IOPS throughput. The drive supports LDPC (Low-Density Parity-Check) error correcting code technology to detect and fix errors along the way. And on the security side, the drive uses AES 256-bit encryption.

For performance we ran our usual barrage of test and have to say, the results are underwhelming. For Houdini the drive hit 3,346.7 seconds, which isn’t terrible but also at the bottom of the group. In our VDBench Workload Analysis, the drive kept slipping above 1ms (sometimes over 10ms) and stayed in last or second to last throughout. 4K read saw it peak at 26K IOPS, 12K for 4K write, 1.03GB/s for 64K read, and 220MB/s for 64K write. Switching over to VDI benchmarks didn’t see an improvement in placement with the FALCON peaking at 15K IOPS in boot, 9K IOPS in Initial Login, and 3K IOPS in Monday Login. The performance overall looked more like how a QLC SSD acts under these conditions than a TLC-based drive.

The ADATA FALCON has lackluster performance but is fairly inexpensive.  If one is looking for a little more of a performance punch, there are several options out there, but for the right price this drive may be useful for limited use.