Back at CES 2020, when shows were still a physical event, Seagate announced several new gaming drives. One of the internal drives announced was the Seagate FireCuda 510 SSD. This SSD comes in an M.2 form factor and leverages the NVMe interface. With NVMe PCIe Gen3 ×4 and a 28GB enhanced dynamic SLC cache, this drive is all about performance for gamers.

Back at CES 2020, when shows were still a physical event, Seagate announced several new gaming drives. One of the internal drives announced was the Seagate FireCuda 510 SSD. This SSD comes in an M.2 form factor and leverages the NVMe interface. With NVMe PCIe Gen3 ×4 and a 28GB enhanced dynamic SLC cache, this drive is all about performance for gamers.

The Seagate FireCuda 510 SSD comes in capacities of 500GB, 1TB, and 2TB. Leveraging PCIe G3 x4, NVMe 1.3 the SSD can hit speeds upward of 3.45GB/s read and 3.2GB/s write. The drive has the endurance gamers need too with 1.8 million MTBF and up to 2,600 TBW. While it is primarily aimed at gamers, the drive offers performance that works for creative professionals as well.

The Seagate FireCuda 510 SSD comes with a 5-year warranty and the smallest capacity can be picked up for about $108. For this review we will be looking at the 1TB.

We also have a video overview of the drive.

The Seagate FireCuda 510 SSD didn’t do great here, falling to near the bottom of the pack. The drive finished with 3,643.5 seconds. 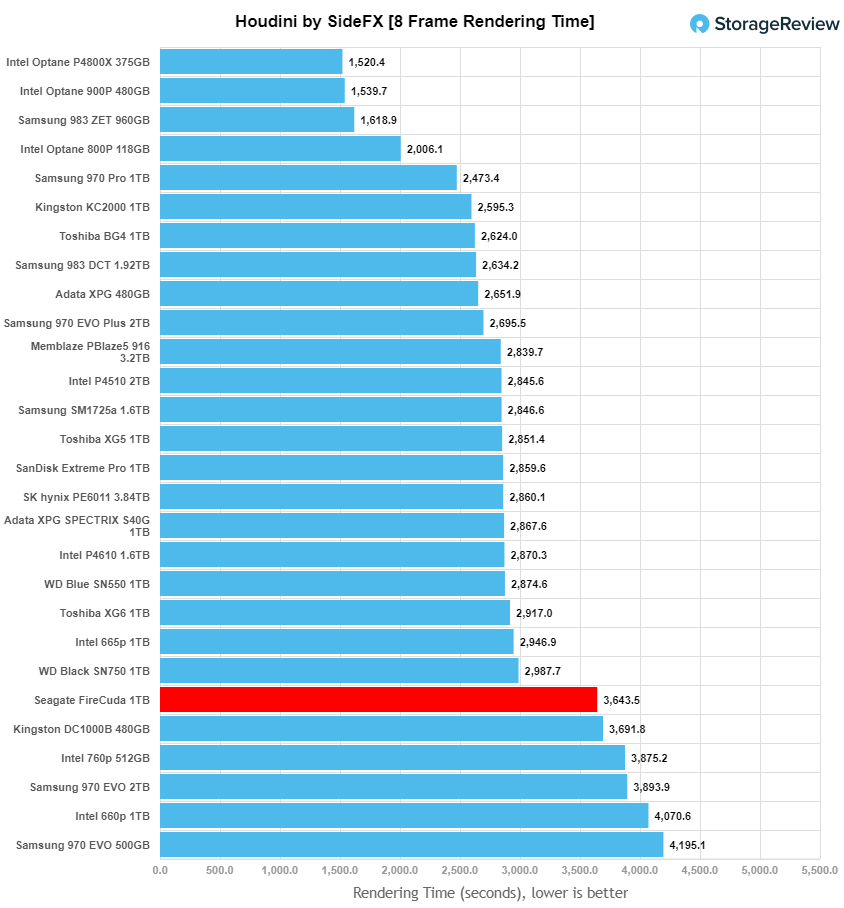 For random 4K read the Seagate FireCuda 510 SSD placed third in our pack with a peak score of about 337K IOPS at a latency of roughly 350µs before falling off. The WD Black took the top spot.

With random 4K write FireCuda had sub-100µs latency performance throughout a majority of our test and peaked at 141,153 IOPS with a latency of 179µs. This places the drive at fourth with the Samsung taking the lead.

Switching over to sequential workloads, the FireCuda placed second in 64K read with a peak performance of 34,370 IOPS or 2.1GB/s at a latency of 466µs. The WD Blue took the top spot.

Next, we looked at our VDI benchmarks, which are designed to tax the drives even further. These tests include Boot, Initial Login, and Monday Login. Looking at the Boot test, the Seagate FireCuda 510 SSD came in fourth again with a peak performance of 73,697 IOPS at 262µs before dropping off some. The WD Black took the top spot.

VDI Initial Login saw the FireCuda in third with a peak of 38,600 IOPS with a latency of 782µs. Top honors went to the Samsung.

Finally, VDI Monday Login saw the FireCuda once again in fourth with a peak score of 27,940 IOPS at a latency of 570µs. The WD Black took the top spot here.

The Seagate FireCuda 510 is an M.2 SSD that is all about performance and aimed at gamers. The drive comes in capacities as high as 2TB for storing and loading users most played games. The FireCuda has performance claims of 3.45GB/s read and 3.2GB/s write and endurance of 1.8 million hours MTBF and up to 2,600 TBW.

Looking at performance, we compared the FireCuda to several other client M.2 SSDs. The FireCuda never took the top spot in any of our tests though its numbers weren’t bad by any means. In Houdini the drive landing towards the bottom half with 3,643.5 seconds. In our VDBench the FireCuda had highlights of 337K IOPS for 4K read, 141K IOPS for 4K write, 2.1GB/s read in 64K, and 783MB/s write in 64K. In our VDI benchmarks, the FireCuda hit 74K IOPS in boot, 39K IOPS in initial login, and 28K IOPS in Monday login.

Overall, the Seagate FireCuda 510 SSD delivers even overall performance. Users will have to look over the drives available and pick the right price to performance for their use cases. Time will tell if the drives become more competitive price-wise.