addlink has come out with an M.2 SSD that is aimed at NAS users, the addlink addNAS N50. While it is marketed around replacing HDDs for a performance boost, its form factor suggests it may be better leverages as a cache in NAS devices (assuming the vendor hasn’t decided to only use their own SSDs). While the drive is aimed at NAS use, there is nothing that precludes users from leveraging the drive in other storage use cases.

addlink has come out with an M.2 SSD that is aimed at NAS users, the addlink addNAS N50. While it is marketed around replacing HDDs for a performance boost, its form factor suggests it may be better leverages as a cache in NAS devices (assuming the vendor hasn’t decided to only use their own SSDs). While the drive is aimed at NAS use, there is nothing that precludes users from leveraging the drive in other storage use cases. 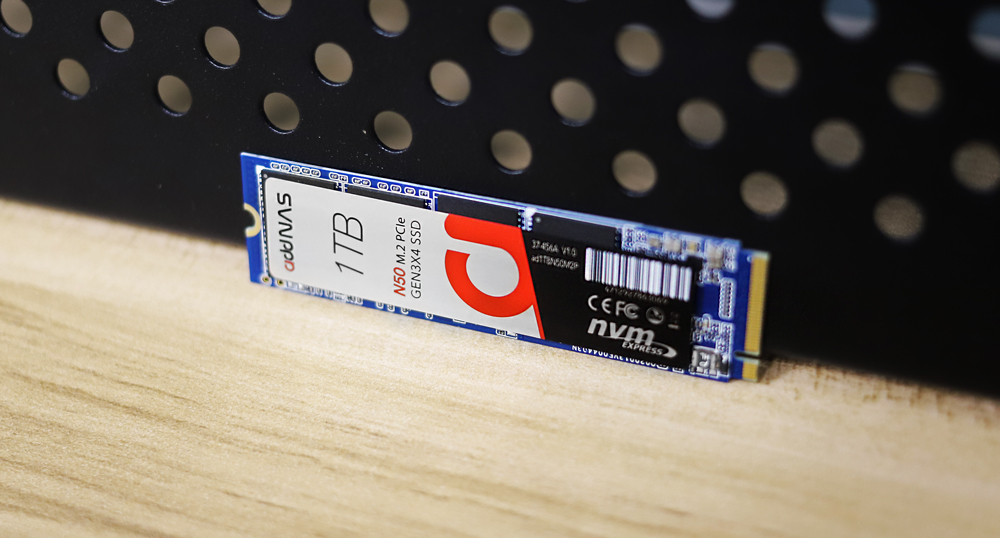 NAS have for a long time relied on HDDs for storage. This can pack quite the capacity punch in a format as small as 1- to 2-bays wide and tall. However, the price of flash has been coming down in a steady manner while the demand for faster load times has gone up dramatically. NAS vendors first introduced the idea of an SSD cache a few years ago that allowed two bays to be filled with 2.5” SSDs and saw a big uptick in speed. As time went on, users didn’t want to give up the capacity and many vendors added in M.2 slots for the cache. addlink introduced its addNAS line to address both issues.

As stated, they seem to be marketing both their 2.5” SATA and M.2 NVMe SSDs for HDD replacement in NAS devices. Most likely, it is as the above lays out. That being the case, the N50 is a way to add SSD performance to NAS in the form of a cache. Upper quoted performance includes 2.5GB/s and a throughput of 430K IOPS. The drive utilizes the PCIe Gen3 interface so it will work with most of the existing NAS. It should be noted that this is a DRAM-less SSD that uses a Phison E13 controller.

Aside from performance, the drive lends itself well to NAS use with enough endurance to run 24/7. To help with this, the NAS SSD line supports advanced error-correcting code (ECC) technology that combines LDPC, RAID ECC protection, and supports advanced wear-leveling, bad block management.

The addlink N50 comes with a 5-year warranty and comes in capacities of 256GB, 512GB, and 1TB (though their product page claims 2TB, it seems to be missing from the specs and from where the drive line can be purchased). The SSD can be picked up today for $57, $91, and $148 respectively.

For this review, we are comparing two other SSDs that are made for NAS use. These include:

In random 4K read the addlink N50 was way back in the last place with a peak of 101,915 IOPS and a latency of 1.25ms, though it had just dropped back down to that after spiking over 3.5ms.

Next, we move on to our SQL workloads where the addlink N50 stayed at the bottom of the pack with a peak score of 45,706 IOPS and a latency of 699µs though the latency was much higher just before this.

Next up is our Oracle Workload tests consisting of Oracle, Oracle 90-10, and Oracle 80-20. In the first test the addlink N50 did more of the same with inconsistent performance and dragging up the rear. The drive peaked at 31,530 IOPS with a latency of 1.11ms.

Next, we switched over to our VDI clone test, Full and Linked. For VDI Full Clone Boot, the addlink N50 placed last with an uneven performance that led to a peak of about 31K IOPS and a latency of roughly 770µs. The latency was over 3ms earlier in the test.

VDI FC Initial Login showed a very uneven run for the N50 with latency jumping over 10ms at one point. Peak performance was 9,769 IOPS with a latency of 3.1ms.

With VDI FC Monday Login the N50 stayed in last place and again saw large jumps in latency, going over 5ms at times. Peak performance was about 12,600K IOPS and a latency of about 1.1ms.

Next up is VDI Linked Clone. Starting with the boot again the N50 showed several spikes in latency and settle on a peak of 22,313 IOPS with a latency of 716µs though it was over 1.8ms at one point.

VDI LC Initial Login saw the N50 spike as high as 6ms before dropping down to 8,334 IOPS just under 1ms in latency, again for last place.

Finally, in our VDI LC Monday Login the addlink N50 spiked as high as 16ms before dropping down and peaking at 7,528 IOPS and a latency of 881µs.

The addlink N50 is an M.2 SSD that is part of the company’s addNAS line aimed at bringing cheap flash to NAS devices to replace HDDs. The N50 is an NVMe drive that comes with a form factor aimed at providing an SSD cache for NAS devices (it seems that there is a bit of a messaging mix up as it is stated as an HDD replacement, though the company does offer the N10 that is more suited for such a use case being a SATA 2.5” SSD). The drive has quoted speeds up to 2.5GB/s and 430K IOPS for throughput. The drive comes in capacities ranging from 256GB to 1TB and can be picked up for as little as $57.

The addlink N50 NVMe SSD performed poorly and lower-cost alternatives exist. If you are looking for performance, there are several good options out there.