The ASUSTOR LOCKERSTOR 10 (AS6510T) NAS is a budget-friendly, enterprise NAS designed for organizations of who have high-capacity needs. Its 10-bay configuration makes the AS6510T a scalable storage solution; organizations with reduced budgets or storage requirements can purchase a smaller number of hard disks at first and then add more as their needs grow. The NAS also supports online capacity expansion and features ASUSTOR’s MyArchive, a plug-and-play storage technology that allows hard disks to be used as removable storage archives. Simply add an “archive” and swap it out for a different one whenever you need, making it a hugely flexible device.

The ASUSTOR LOCKERSTOR 10 (AS6510T) NAS is a budget-friendly, enterprise NAS designed for organizations of who have high-capacity needs. Its 10-bay configuration makes the AS6510T a scalable storage solution; organizations with reduced budgets or storage requirements can purchase a smaller number of hard disks at first and then add more as their needs grow. The NAS also supports online capacity expansion and features ASUSTOR’s MyArchive, a plug-and-play storage technology that allows hard disks to be used as removable storage archives. Simply add an “archive” and swap it out for a different one whenever you need, making it a hugely flexible device. 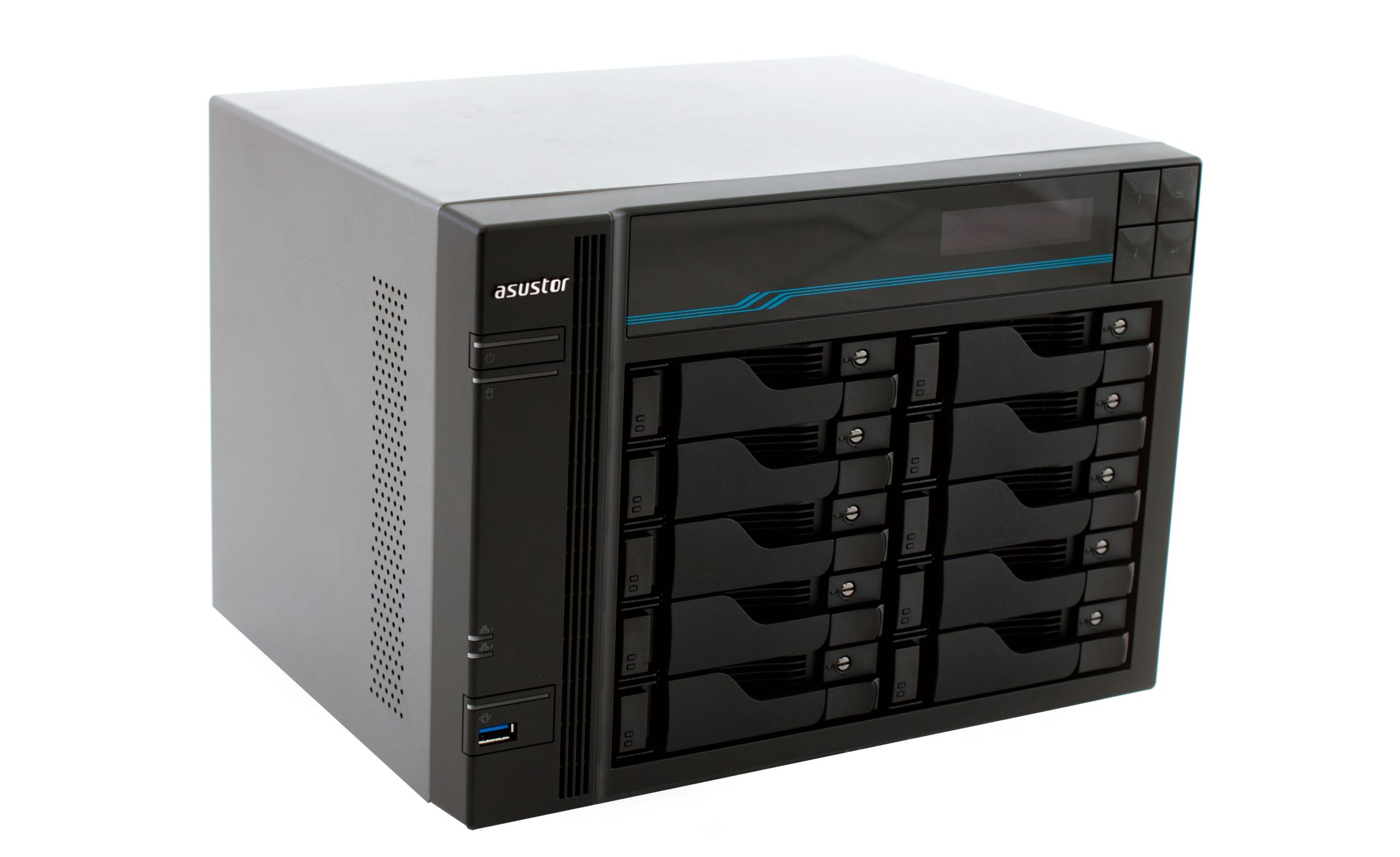 The Lockerstor AS6510T is powered by an Intel Denverton-based Atom C3538 Quad-Core CPU. This is part of Intel’s third generation of SoC-based CPUs manufactured on 14nm process technology, which is ideal in networking, storage and IoT use cases due to its exceptional performance per watt, low thermal design power, and configurable high-speed I/O. The AS6510T also features 8GB DDR4-2133 SO-DIMM, which is expandable to a decent 32GB, and can be outfitted with 10x 3.5-inch SATA hard drives and two M.2 NVMe SSD ports for fast caching. With these 10 storage bays, maximum internal raw capacity can reach up to a massive 160 TB (using 10x 16TB HDDs). This can further scale to 288TB using two of the company’s 4-bay expansion units. For networking connectivity, the Lockerstor NAS is highlighted by its dual 10-Gigabit Ethernet and dual 2.5-Gigabite Ethernet ports, which helps to eliminate performance bottlenecks for the NVMe SSDs.

The AS6510T also features “Wake on WAN”, a technology that allows users to remotely wake up (and turn off) the NAS through a variety of mobile apps such as AiMaster, AiMusic, AiVideos and AiData. As such, users will be able to power down their NAS whenever they want without having to worry about starting it back up again. This helps keep data safe when the NAS isn’t in use and protects data integrity by remaining powered off during power failures.

We have a video overview here:

In addition, the new AS6510T upped its game when it comes to keeping the system cool and running smoothly in a 24/7, always on environment. For example, it uses PWM fans with smart speed controls and heatsinks with push-pin mounting. This feature allows the NAS to optimize its airflow and heat dissipation, which promotes reliability and helps to maintain performance under high loads. Moreover, The Lockerstor NAS has uses heatsinks that are taller than the last gen models.

Backed by a 3-year warranty, our build is equipped with 10 x 8TB Toshiba drives and 8GB of DDR4 SO-DIMM RAM.

Not only is the ASUSTOR LOCKERSTOR 10 (AS6510T) NAS a sturdy NAS, it also sports a very slick build and has some design features that we really like. Sporting an all black/charcoal chassis, the new Lockerstor weighs in at 14.2 pounds (roughly three times the weight of an average laptop) and measures 22cm (height) x 29cm (width) x 23 cm (depth). All drives are easily accessed from the front, which are horizontally stacked in five rows of two.

Though not a tool-less process, mounting new hard drives was fairly easy. Simply press the button on the specific hard disk tray to unlock and release the latch, then pull out it out of the disk bay. For 3.5-inch hard disks, you need to secure the drive with four screws, while 2.5-inch HDDs and SSD hard disks must be placed in a specific area on the tray before you secure them via the mounting screws.

The left side of the front panel is home to all the LEDs, including the Power, System Status, Network (1x 2.5 gigabit and 1x 10 gigabit) and USB indicators. At the bottom left is the USB 3.2 Gen 1 port. 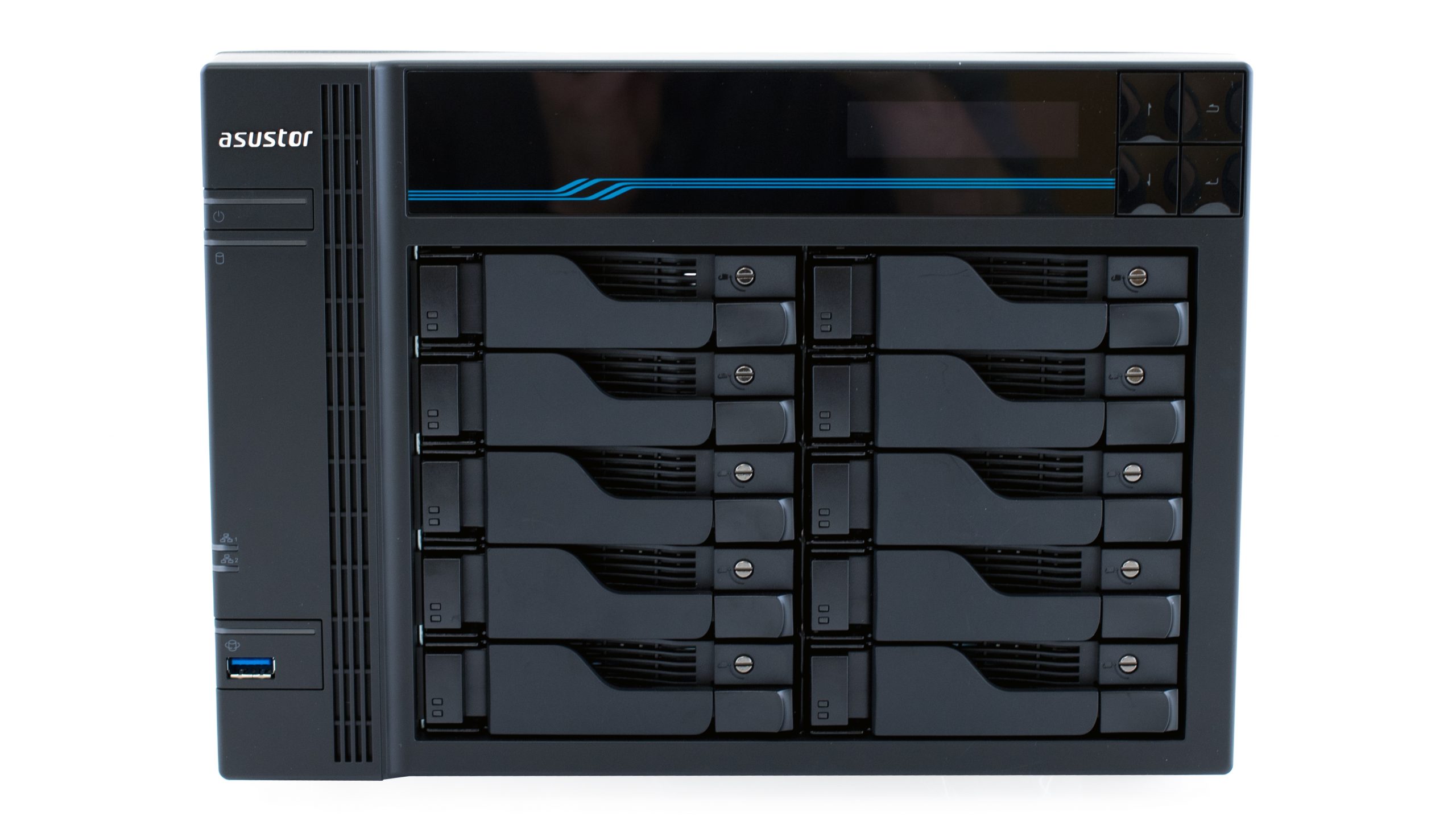 At the top of the Asustor LOCKERSTOR 10 is the LCD panel, which is used to configure system settings and check system information. Next to the LCD are the four buttons used to navigate through the menus: up, down, back and confirm. This is a very nice display. It’s bright, easy to navigate/read and the buttons are very responsive; simply press the up or down buttons to navigate through the menu items, press the confirm button to access the specific submenu, and use the back button to return to the previous area. There are a range of useful menus, including Touch Backup, Network, Storage, Temperature, Operation and Configuration. 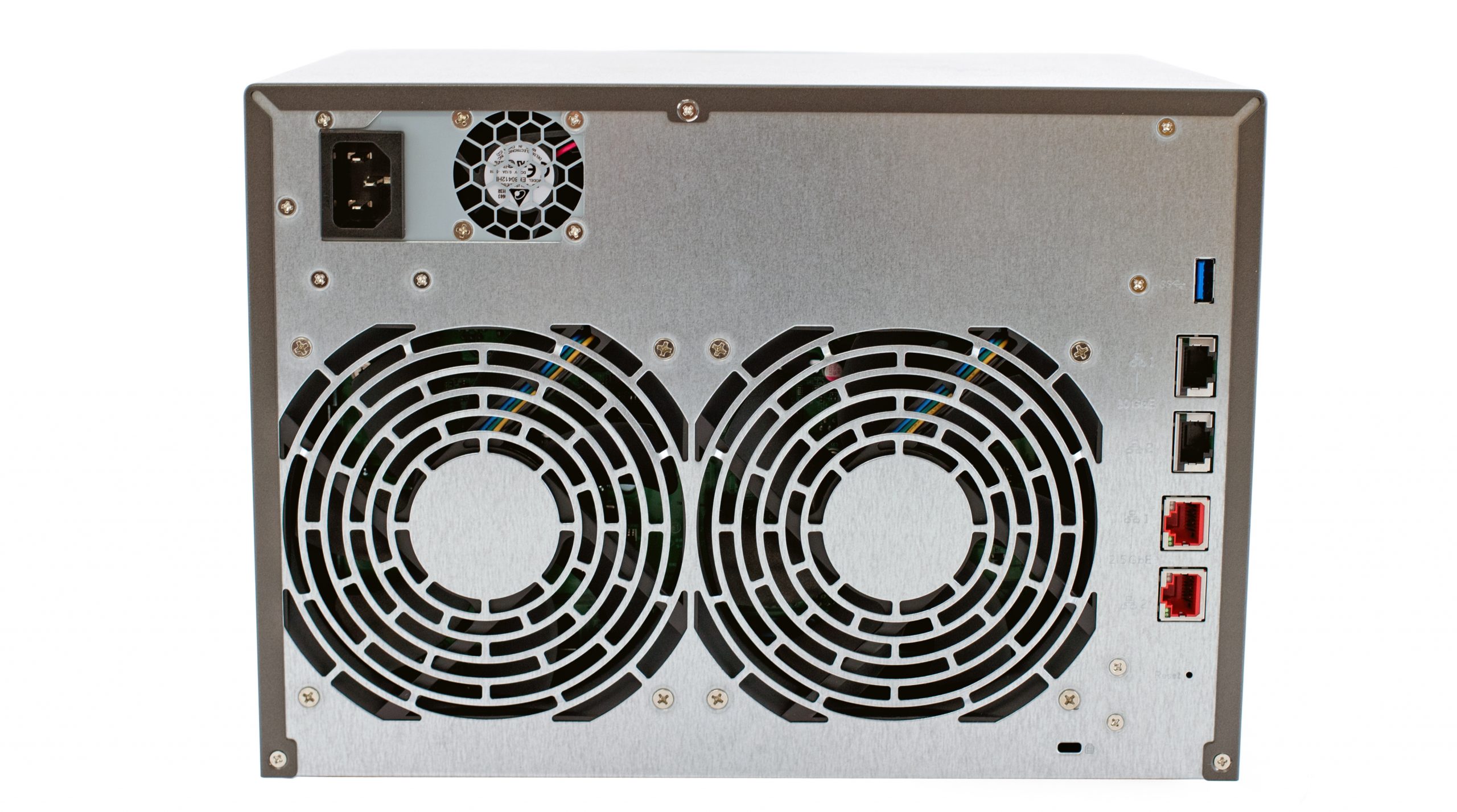 In the first of our enterprise workloads, we measured a long sample of random 4K performance with 100% write and 100% read activity. Looking at IOPS, the ASUSTOR LOCKERSTOR 10 (AS6510T) NAS showed its best performance in iSCSI, hitting 602 IOPS read and 2,523 IOPS write. In CIFS, it posted slightly slower writes with 2,463 IOPS, though reads were much slower at 322 IOPS

Compared to the fixed 16 thread, 16 queue max workload we performed in the 100% 4K write test, our mixed workload profiles scale the performance across a wide range of thread/queue combinations. For these tests, we span workload intensity from 2 threads and 2 queue up to 16 threads and 16 queue. With throughput, the ASUSTOR LOCKERSTOR 10 AS6510T posted 422 IOPS through 566 IOPS in iSCSI while CIFS had a range of 201 IOPS through 198 IOPS in the terminal queue depths (though it hit 202 IOPS at 8 Threads 4 Queue). 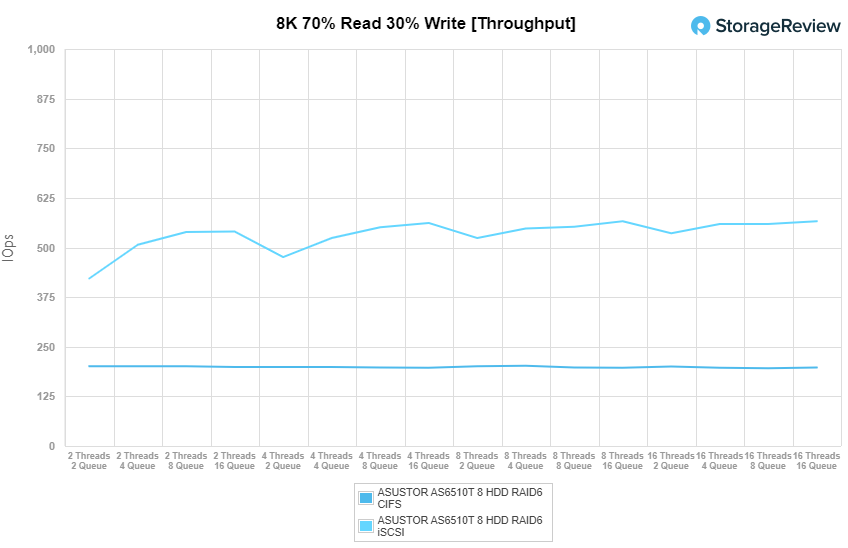 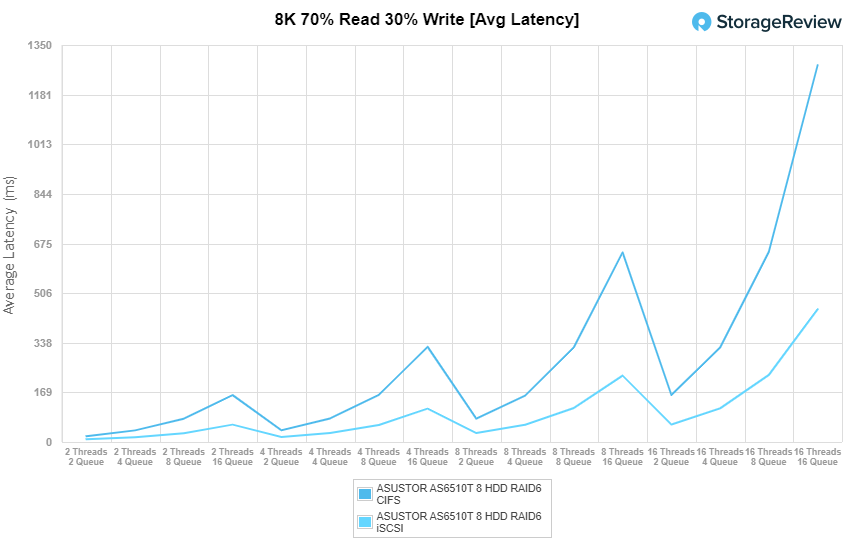 For the AS6510T maximum latency, though iSCSI started off with somewhat similar performance (1,222.25ms), it was soon out-performed by the CIFS configuration, which posted a range of 1,100.41ms through 4,910.5ms. 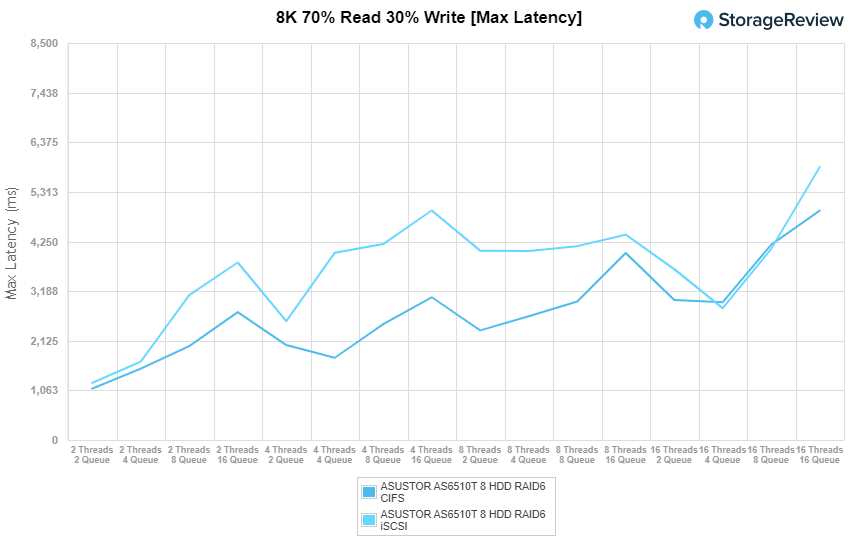 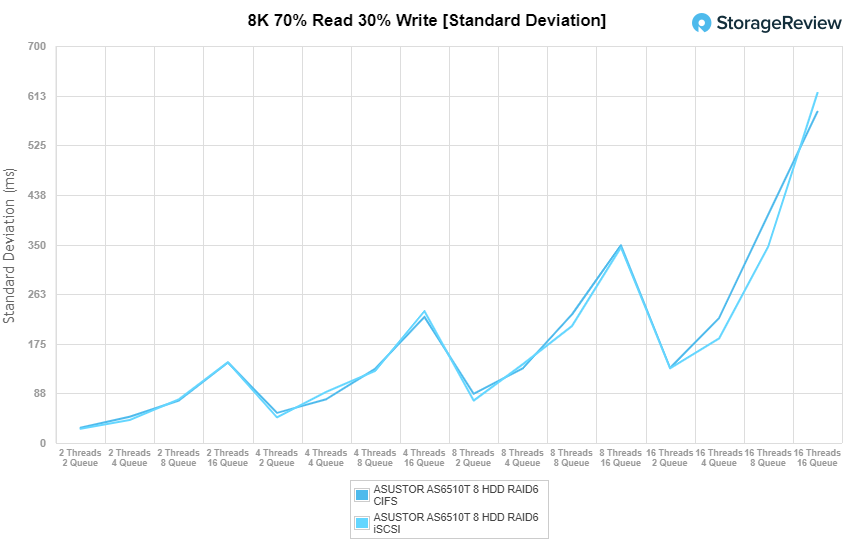 The ASUSTOR LOCKERSTOR 10 (AS6510T) NAS is viable choice for those in need of a budget-friendly storage solution with high storage capacity. ASUSTOR’s new 10-bay NAS features dual USB 3.2 Gen 1 ports and four network ports (two 2.5 Gigabit Ethernet ports and two 10 Gigabit Ethernet ports). It is powered by an Intel Denverton-based Atom C3538 Quad-Core processor and supports up to a generous 160 TB. The NAS can further scale to 288TB via the company’s 4-bay expansion units. One of the things we liked the most about the NAS is its design. This was highlighted by its fantastic LCD on the front panel. The LCD offers users a bright, easy-to-navigate menu to configure system settings and check system information.

The AS6510T also offers comprehensive backup solutions, including Amazon S3, Dropbox, Google Drive, and OneDrive, as well as ASUSTOR Backup Plan for Windows, Time Machine for macOS, and MyArchive removable hard drives for long-term storage. ASUSTOR focuses data-loss protection from damage files and attacks with the Nimbustor 2 and 4, which uses a Linux-based ADM that employs a built-in firewall, ClamAV Antivirus, MyArchive and ADM’s backup tools help protect against ransomware attacks. Moreover, ASUSTOR’s “Wake on WAN” feature is very useful technology, as it helps to prevents attacks, protects data integrity, and saves electricity integrity by powering off (and staying off) when not in use. Users simply need to access a mobile app to turn it back on when they need it.

Overall the AS6510T is great-looking 10-bay NAS from ASUSTOR, packing two more bays than most competing platforms. It offers a ton scalability, functionality and features at a very reasonable price point.