The Crucial P5 is the company’s newest SSD consumer drive to hit the market. Ideal for enthusiasts and design professionals looking to leverage the speedy NVMe interface, the P5 features 3D NAND, PCIe Gen 3, and is available in capacities ranging from 250GB to 2TB. Whereas the P1 and P2 lines were entry-level NVMe drives built more for home users on a budget, the P5 is the company’s top-end SSD line that focuses more on performance than on price.

The Crucial P5 is the company’s newest SSD consumer drive to hit the market. Ideal for enthusiasts and design professionals looking to leverage the speedy NVMe interface, the P5 features 3D NAND, PCIe Gen 3, and is available in capacities ranging from 250GB to 2TB. Whereas the P1 and P2 lines were entry-level NVMe drives built more for home users on a budget, the P5 is the company’s top-end SSD line that focuses more on performance than on price.

As far as the specifics of its performance go, Crucial quotes up to 3,400MB/s read and 3,000MB/s write for the higher capacity models, as well as up to 1,200 TBW endurance for the 2TB model. In addition, the P5 features Adaptive Thermal Protection, a technology that dynamically adjusts storage component activity based on the drive’s usage patterns to help keep the storage system cool. Crucial’s new drive is also equipped with other advanced features such as dynamic write acceleration and full hardware-based encryption to keep user data safe while enhancing system reliability. 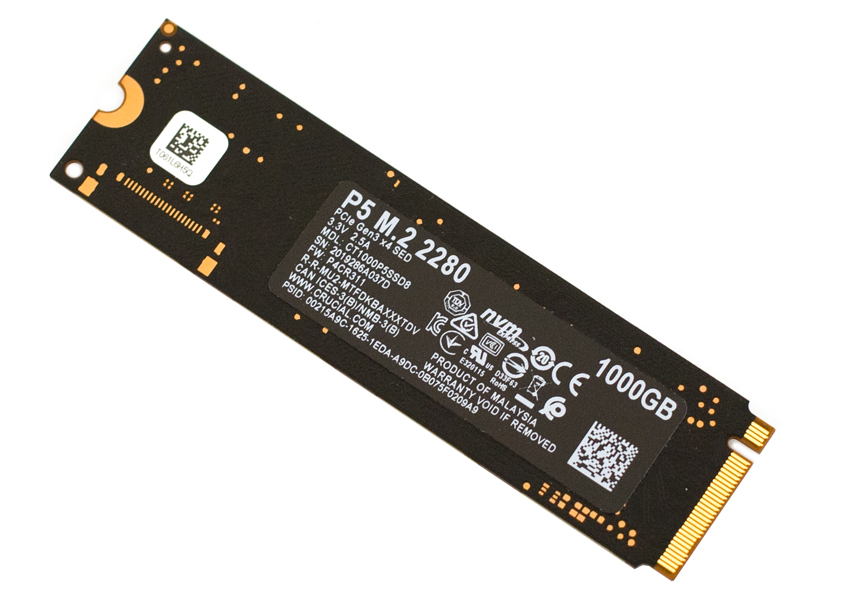 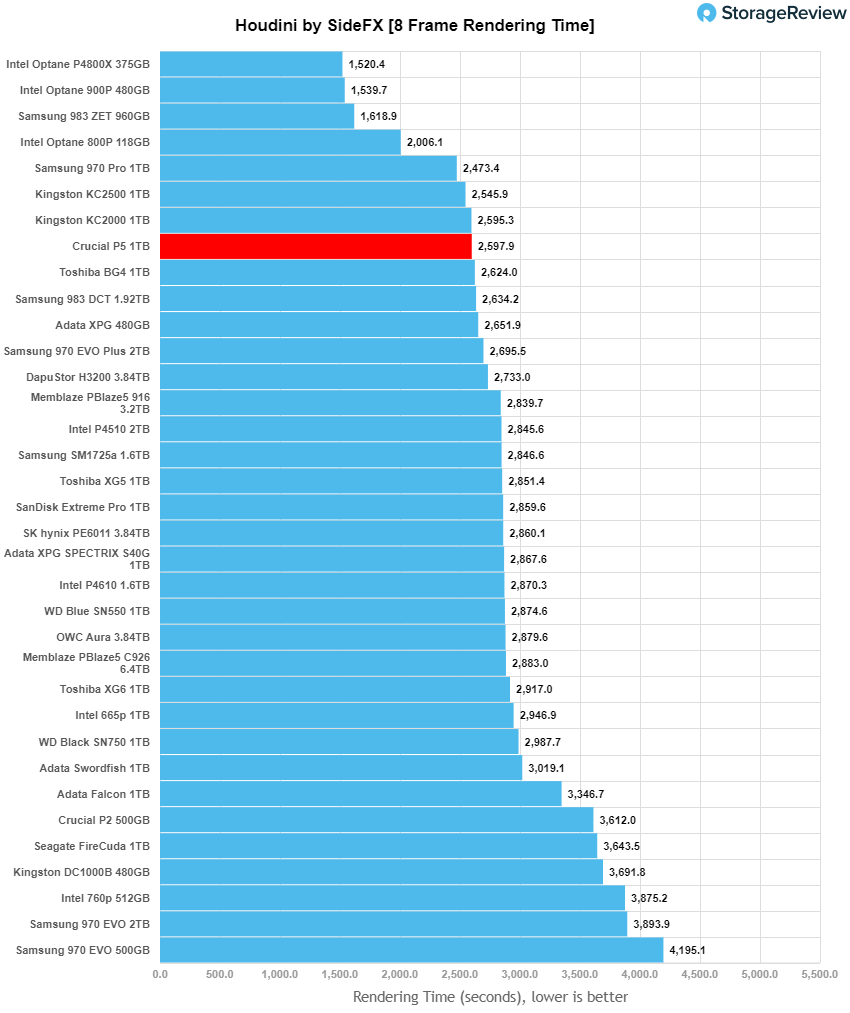 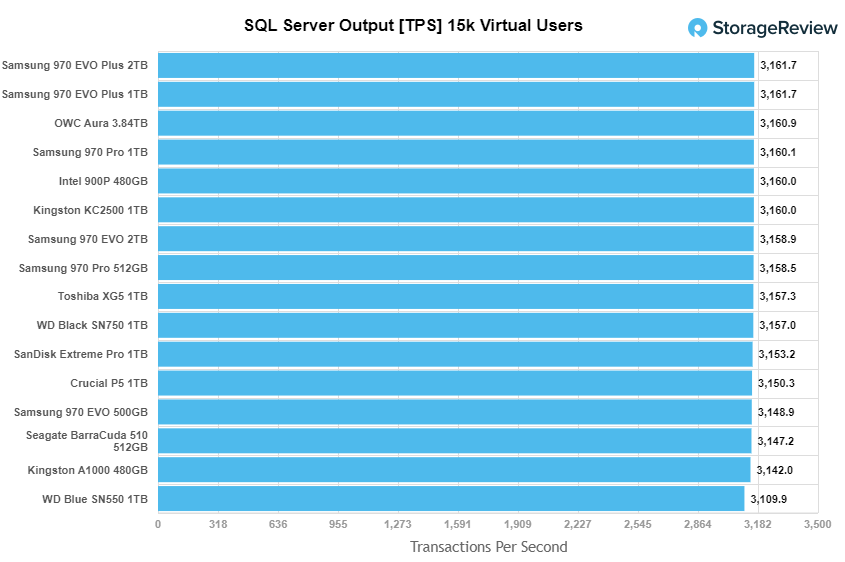 Moving on to latency, the new Crucial drive performed near the button of the leaderboard with 18.0ms, just above the Samsung 970 EVO. 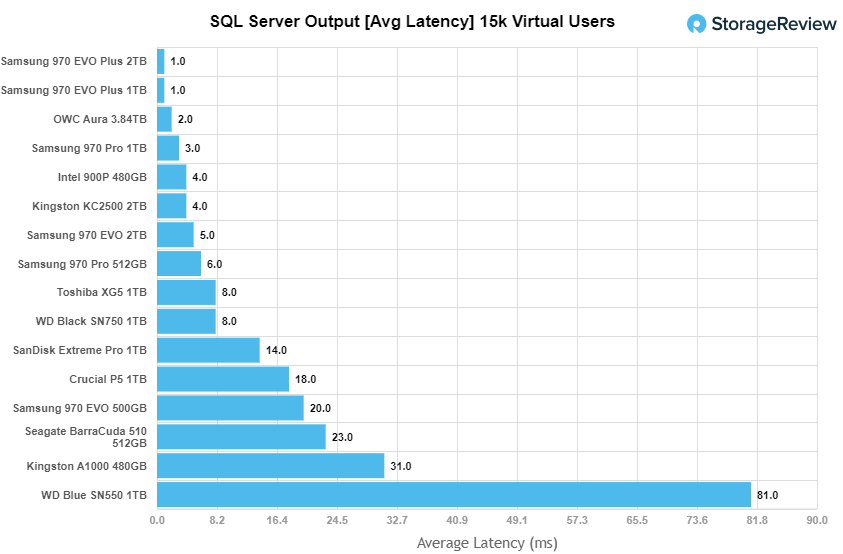 For 4K performance, the Crucial found itself in the lower end of the group. In reads, the drive peaked at just 225,819 IOPS with a high latency of 565.9µs.

With 64K sequential performance, the Crucial P5 showed performance under 1 millisecond throughout the test, as was the case with the rest of the comparables. It went on to peak at 29,173 IOPS (or 1.82GB/s) with 548.3µs.

Next, we looked at our VDI benchmarks, which are designed to tax the drives even further. Here, the new Crucial drive struggled to keep up with the other tested drives. In Boot, the P5 showed a peak of around 41,000 IOPS with a latency of 760.4µs before it slowed down at the end (37,197 IOPS, 938.4ms) for last place by a large margin.

Looking at our VDI Initial Login, the Crucial P5 showed a peak of 25,677 IOPS with a latency of 1,164µs, behind the other tested drives again.

Finally, in our last test, VDI Monday Login showed the Crucial P5 SSD with a peak IOPS at 23,701 IOPS with 677.2ms in latency before taking a hit in performance at the very end.

The Crucial P5 is the newest addition to the company’s SSD portfolio, featuring 3D NAND, the PCIe Gen 3 NVMe interface and capacities ranging from 250GB to 2TB. The P5 is the company’s higher-end consumer drive (compared to the more budget-friendly, entry-level Crucial P2) and is meant to compete with products like the Samsung EVO, as Crucial boasts the drive as extraordinary fast. Though it did perform well enough in a few areas, it fell a bit short overall with mostly uneven results.

Where it lacks in performance, it partially makes up for with its price tag. Compared to the Samsung EVO Plus, which currently retails around $190 and $430 for the 1TB and 2TB, respectively, the P5 comes goes for roughly $180 (1TB) and $400 (2TB). So for a bit less, you can add a mid-range consumer SSD to your system with Crucial’s new drive or you can open up your wallet slightly more for a better-performing drive like Samsung EVO Plus. Nonetheless, the Crucial P5 is a viable, inexpensive solution to add NVMe storage to your system.