Launched in the summer of last year, the Dell EMC Integrated Data Protection Appliance (IDPA) DP4400 is designed to bring several Dell EMC backup and recovery technologies into a single converged solution. The DP4400 leverages a 2U Dell EMC PowerEdge server chassis that delivers two capacity options. DP4400 systems come fully populated in either 24-96TB or 8-24TB options. It’s designed so that users can start small and unlock additional capacity via software key as needed. Even when selecting the 24TB or smaller versions, Dell EMC will offer a non-disruptive field upgrade in the second half of 2019 to bridge from 24TB to larger capacities. Should even more capacity be required, the DP4400 can add a 192TB cloud tier for disaster recovery or long term retention.

Launched in the summer of last year, the Dell EMC Integrated Data Protection Appliance (IDPA) DP4400 is designed to bring several Dell EMC backup and recovery technologies into a single converged solution. The DP4400 leverages a 2U Dell EMC PowerEdge server chassis that delivers two capacity options. DP4400 systems come fully populated in either 24-96TB or 8-24TB options. It’s designed so that users can start small and unlock additional capacity via software key as needed. Even when selecting the 24TB or smaller versions, Dell EMC will offer a non-disruptive field upgrade in the second half of 2019 to bridge from 24TB to larger capacities. Should even more capacity be required, the DP4400 can add a 192TB cloud tier for disaster recovery or long term retention.

Beyond the mentioned backup, restore and cloud tiering support, IDPA converged solutions also bring in replication, deduplication, search, analytics and instant access and restore. In addition to the comprehensive feature set, Dell EMC has also made every effort to make the DP4000 easy to use. The system is accessed via an HTML5 interface that’s designed to bubble up system wide information and reports to make administration and planning easier than managing each of the applications individually. To help the system perform well, Dell EMC includes an NVMe drive in the system that serves as a metadata cache for Avamar and can also be used for instant access for rapid VM recovery.

ROBO and retail scenarios are a good target for something like the DP4400, especially in a large enterprise that already uses Avamar. The single unit on-prem provides speed and efficiency for local restores. However, the data can also be replicated to the core data center for additional protection policies. For those wanting cloud-based disaster recovery, the DP4400 supports integrated cloud DR to AWS and can fail over in three clicks. From there AWS takes over protection, via S3 and EC2 on demand. Returning to the DP4400 requires just two clicks to fail back. Redirected restores are also supported.

Of course the DP4400 is just the entry unit in the IDPA family, the systems can scale up to be quite large. The family’s top-level specs are outlined in the table below.

All of the IDPA converged solutions offer a guaranteed dedupe ratio of 55:1 (depending on data types) and 3-year satisfaction guarantee via the Dell EMC Future-Proof Loyalty Program, with the required support agreement.

The Dell EMC IDPA DP4400 is a 2U appliance that is all about storage, storage, and more storage. Beneath the bezel there are twelve 3.5” bays, inside are four more 3.5″ bays and even on the rear are two additional bays making for a grand total of 18 3.5″ drive bays. On the right side of the front is the power button, two USB ports, an iDRAC port, and a serial port. These would be used for initial deployment or servicing down the road.

Flipping around to the rear of the device we see eight 10GbE ports (four at the top left and four in the bottom middle). There is an iDRAC port on the bottom left along with two serial ports, with two 1GbE ports above. The top right is filled with two more 3.5” drive bays and two hot-swappable PSUs are on the bottom right. While a lot is going on on the rear of the DP4400, it’s more of a controlled chaos needed for reaching multiple storage and network fabrics, with redundancy. You can also see the NVMe storage device under the left hard drive, which is used to store metadata caching.

The top of the device pops off easily with the lift of a handle giving users access to just about everything under the hood. Note this is the dense-packed R740 chassis with front, mid and rear drive backplanes. This gives the R740 a massive data footprint, which as shown includes 216TB of raw storage capacity. 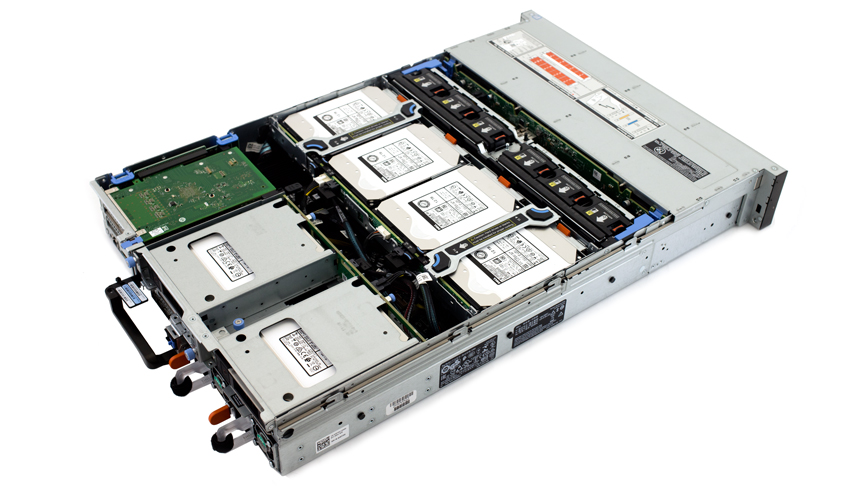 The middle of the device has yet more storage with a removable tray of four more 3.5” drive bays. This is also how one gains access to the RAM and CPUs. The fans are hot-swappable and access here as well.

Taking out the rear drive bays gives one access to PCIe storage, which is added to speed up the backup process and assist with recovery. 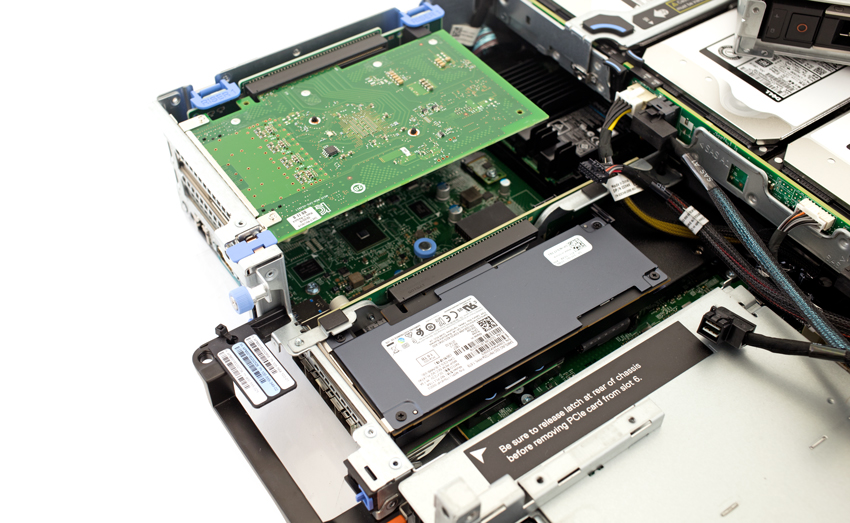 Dell EMC has taken all of its backup software and put in under one roof for users to take advantage of. While this isn’t exactly a single-pane of glass, users can get all the benefits with minimal hoop jumping. With a recent software update Dell EMC included Single Sign On (SSO) capabilities to smooth the transition of moving between the different underlying applications that run on the DP4400.

First, we look at the Integrated Data Protection Appliance (IDPA) system manager. The Dashboard lists off important information such as Assets and Jobs backups and replications in the past 24 hours, assets backups and replication trends, assets summary, assets top offenders, alter and health summaries, and storage capacity utilization and summaries. It should be noted, we’re looking at stock views; the dashboard is based on widgets that can be easily customized by the user. Custom dashboards can be named and accessed from the pulldown menu. 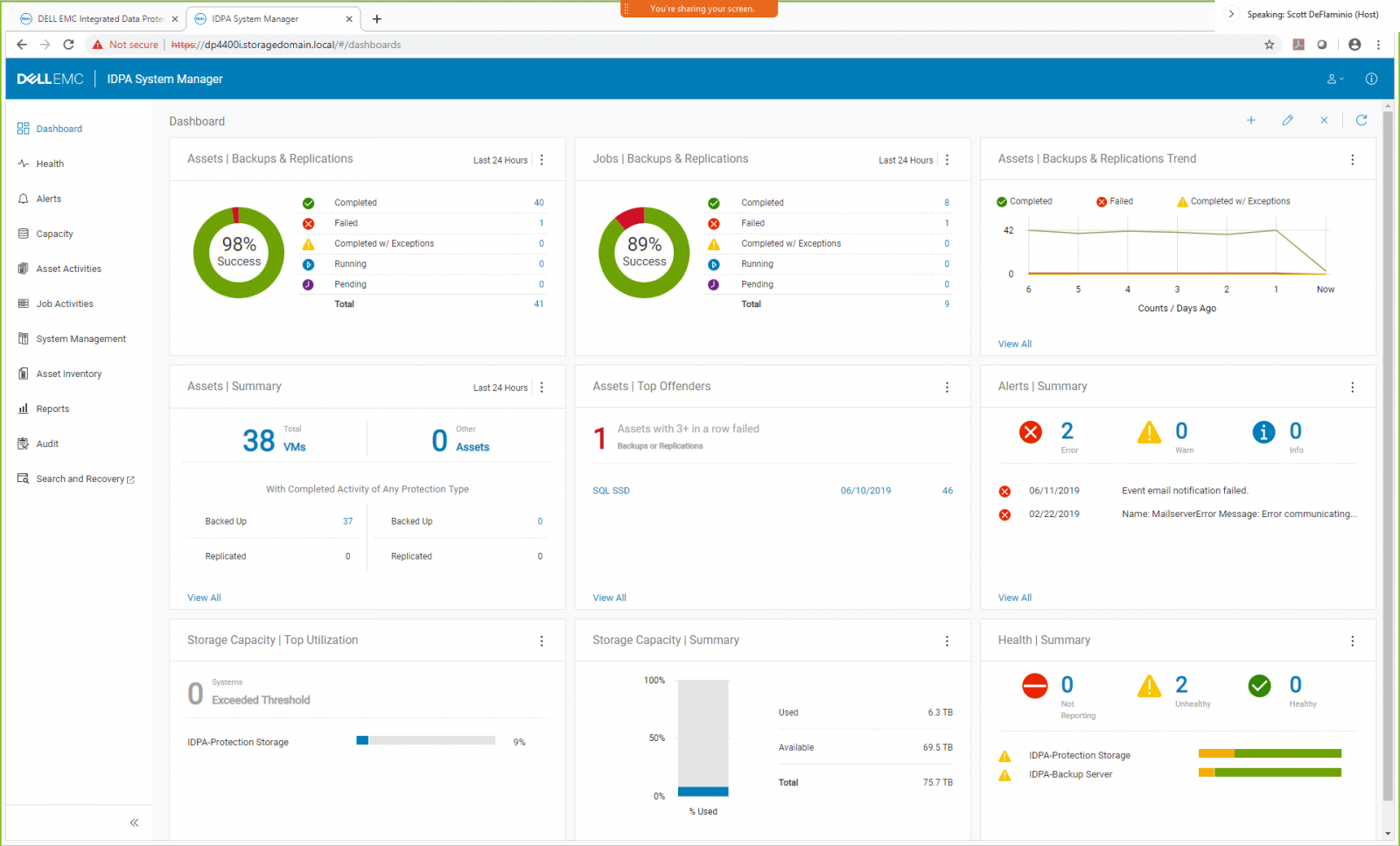 Drilling down into the Health tab we can look at both the backup server and protection storage, their versions, and the overall health or if there were many alerts. 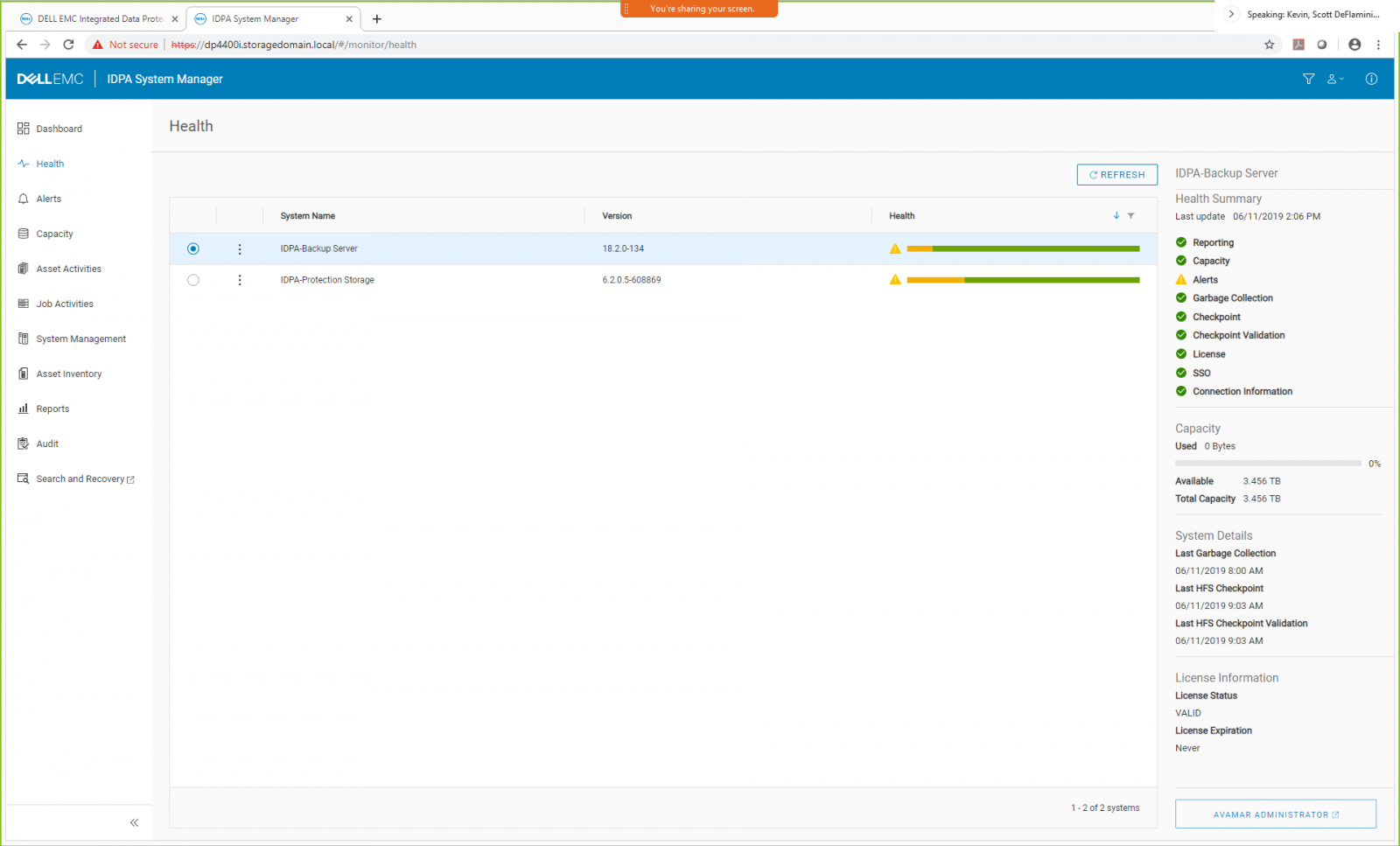 Here, there may be more of a benefit of switching over to Data Domain System Manager. This can be done by opening up a new browser and logging in. 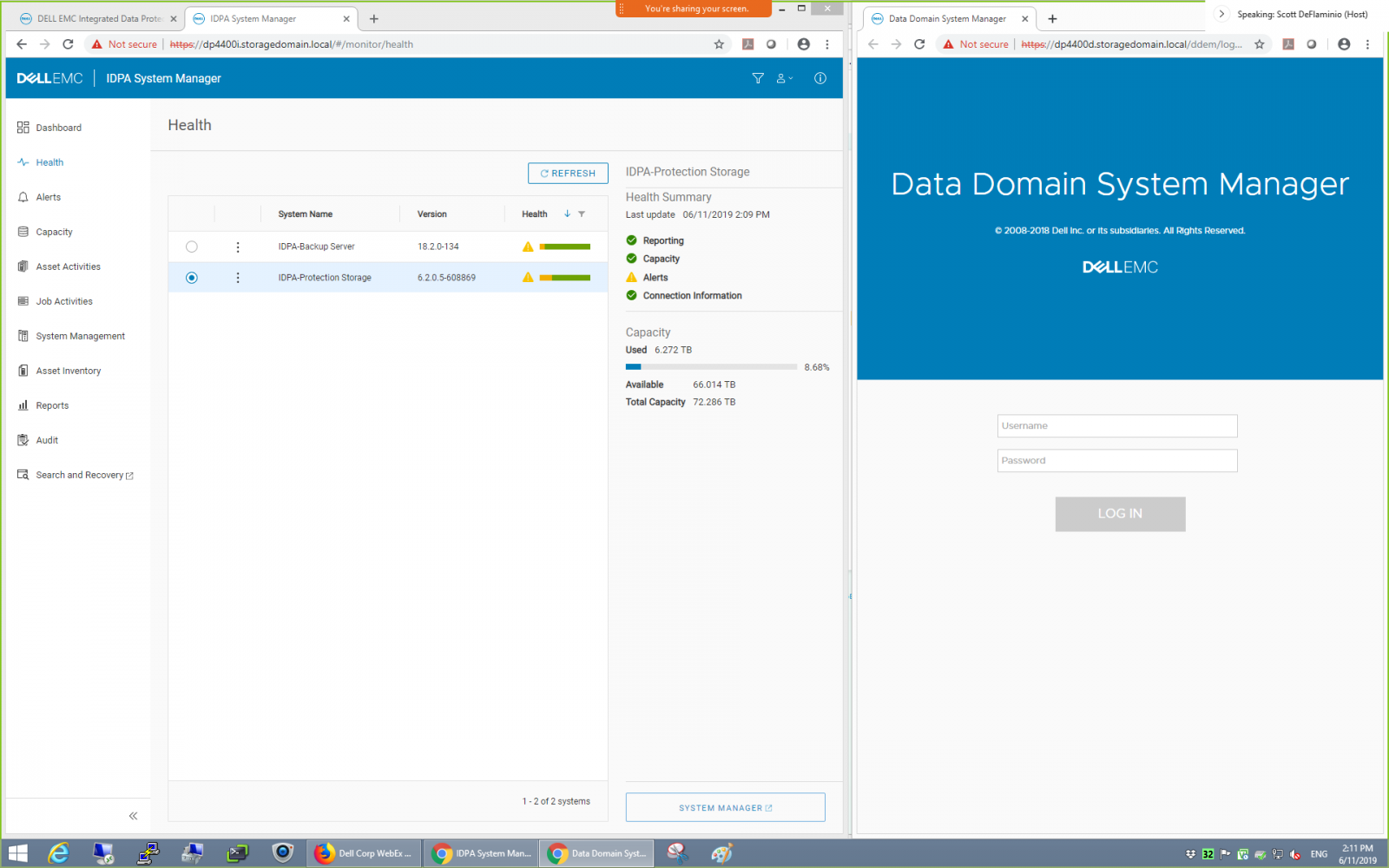 Bringing up the Data Domain System Manager Dashboard, one can quickly see the most recent alerts and how they are broken down (hardware, replication, file system, or other). 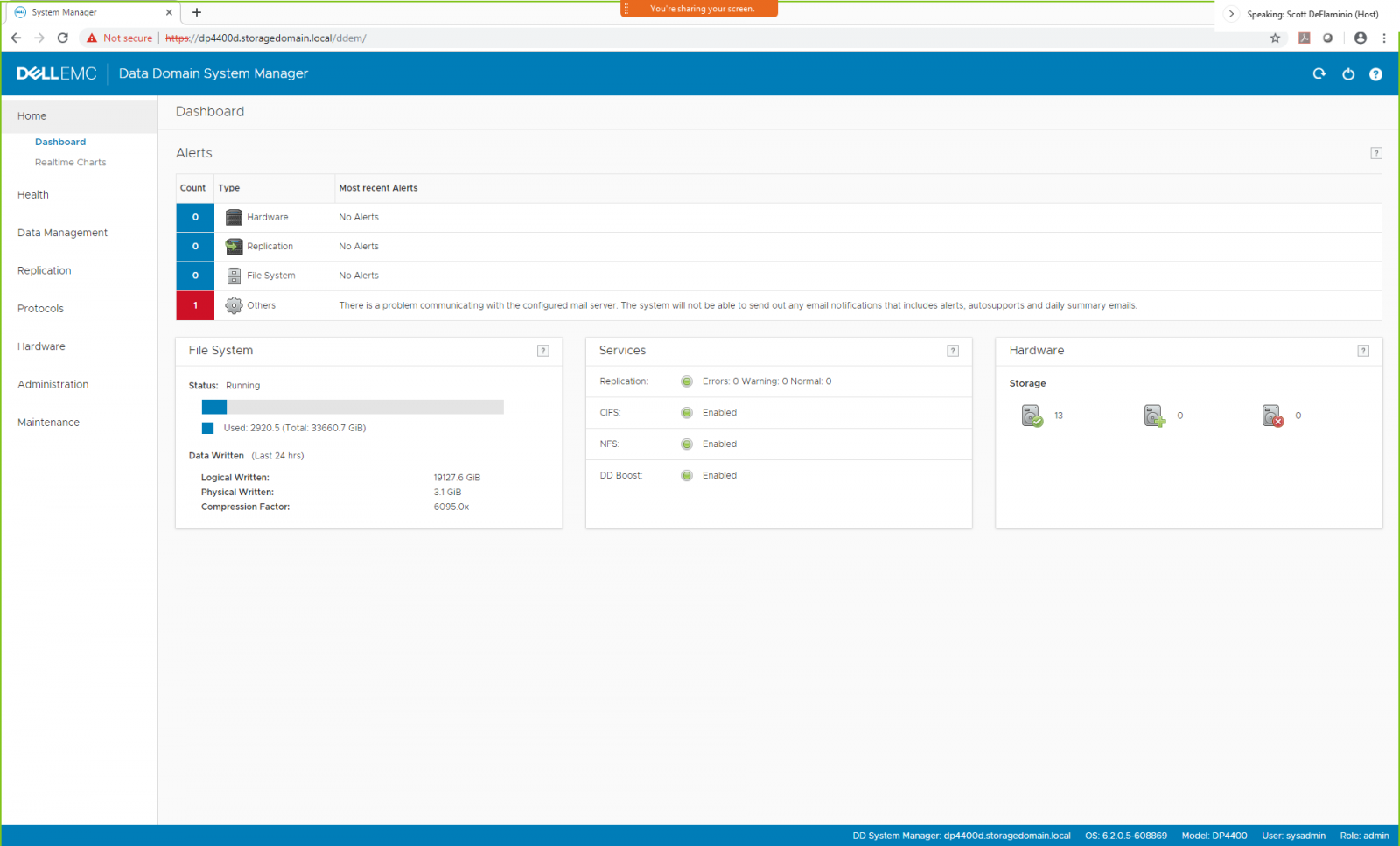 With Data Domain System Manager, users can drill down into data management to further see how specific parts are being managed and expand the capacity. 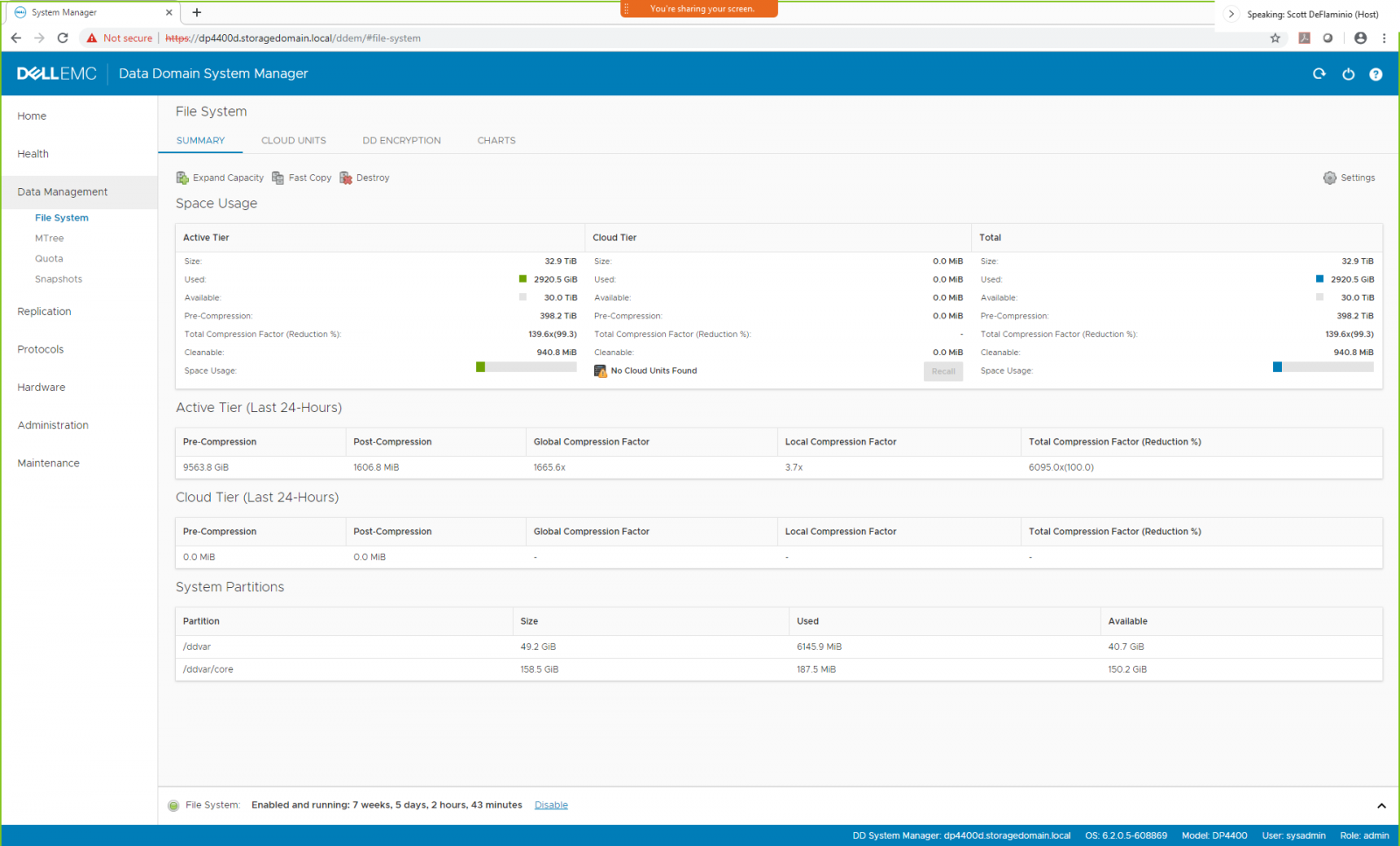 Going back to IDPA System Manger, one can look across all the different software to see if there is an issue, as below one can see health issues in both Data Domain and Avamar. 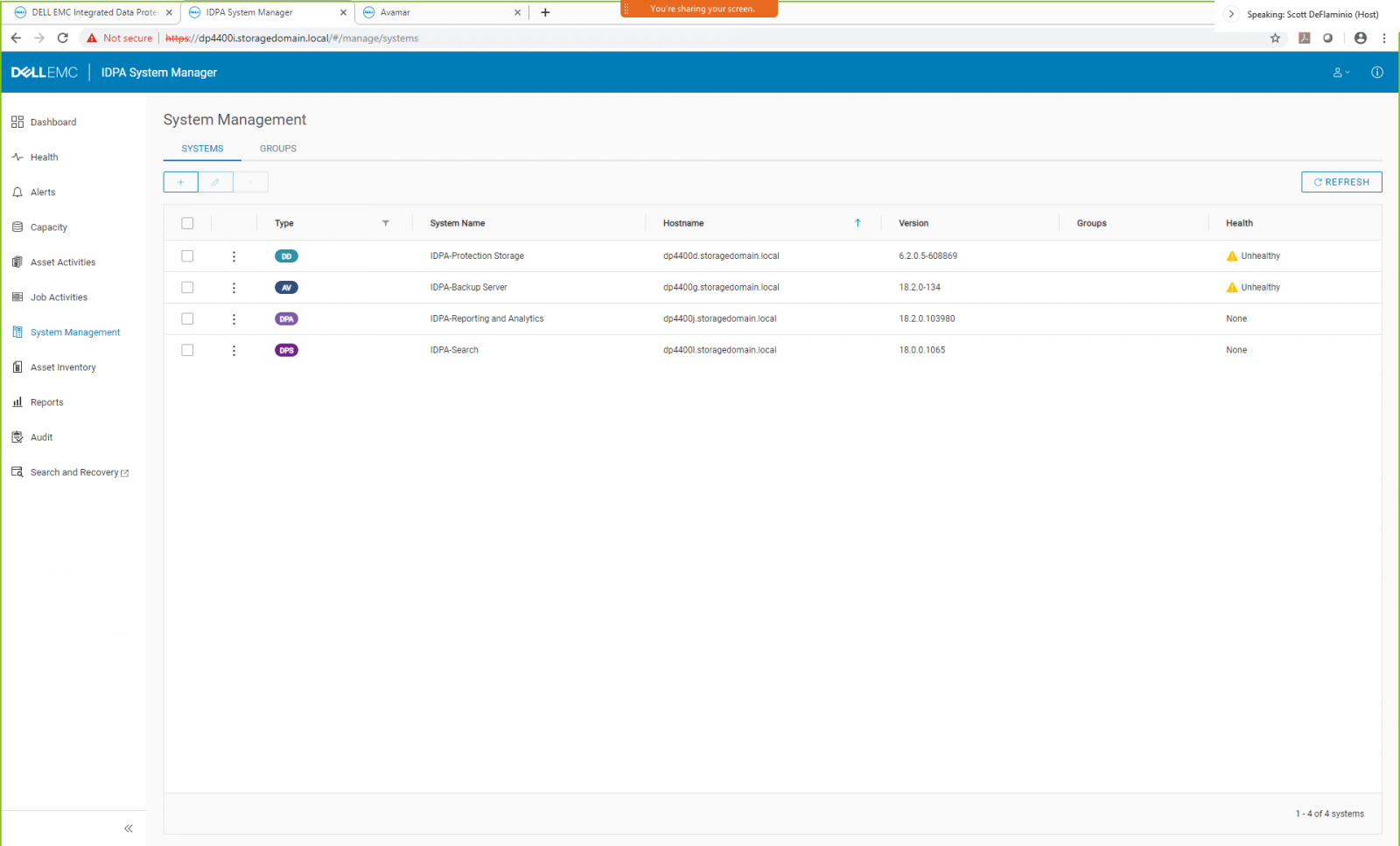 Flipping over to Avamar, users can check on asset management that allow them to add or delete clients, check on activities and set or change policies. Here we see our 32 protected VMs attached to a vCenter in our ESXi environment that we had running over the duration of this review. Some of these VMs move around on a daily basis, accounting for some of the errors or warnings when they resided on a server that was offline at the time the DP4400 was making its backup rounds. 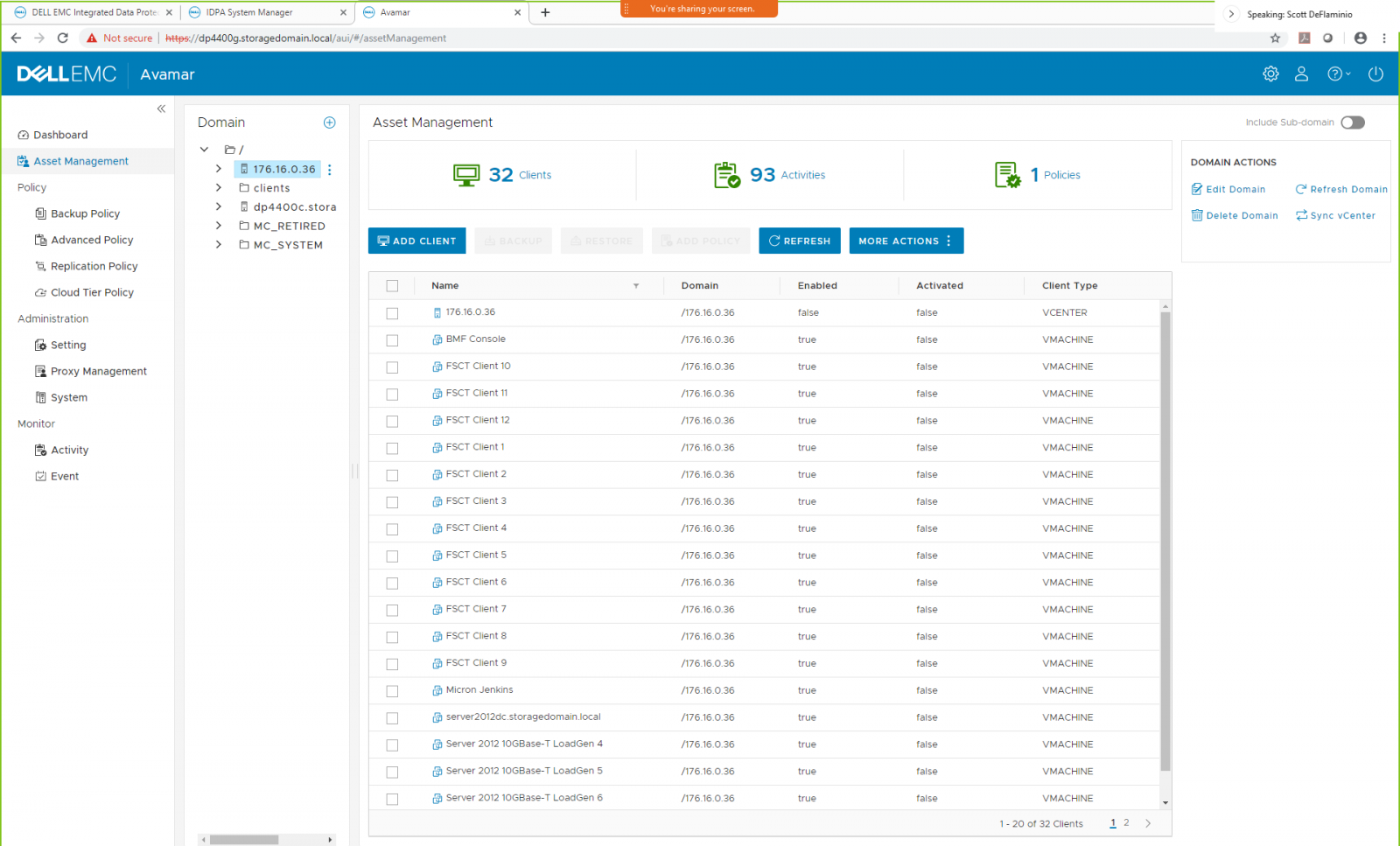 Clicking on policies, one can set up and schedule when the policy will kick into effect or turn off. 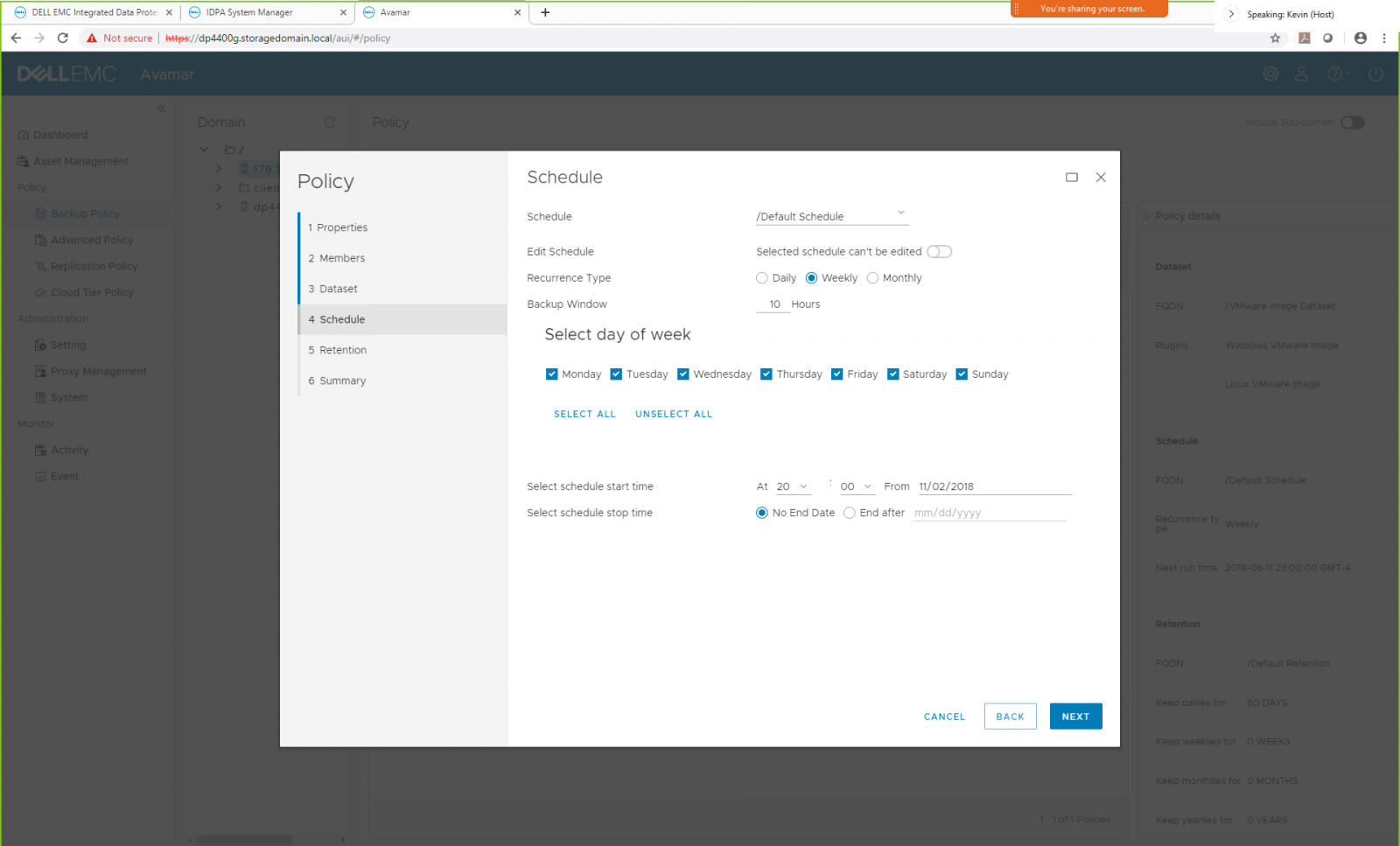 Another interesting facet of Avamar is the report card. Here, users can look over various parts of their solutions to see what is running well and what is causing issues. The red bars indicate the failed backups to a certain group of VMs, which were sitting on a host offline at the time those backups were taking place. 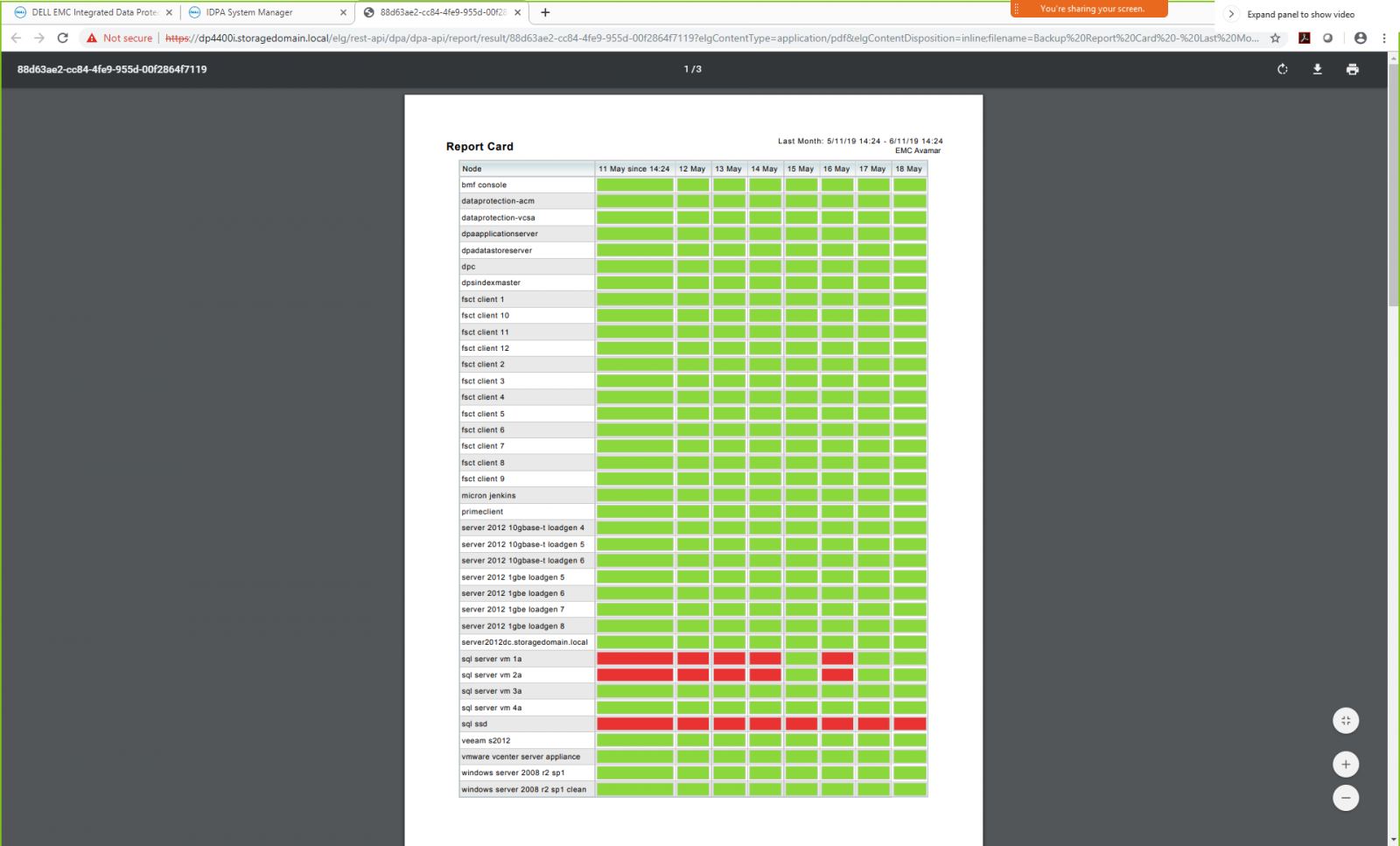 The Dell EMC IDPA line has had several different backup and recovery options for some time and with the IDPA DP4400 it aims to bring all the different technologies to one platform. The DP4400 is aimed at remote/branch offices and midmarket accounts with upward capacity of 96TB local and up to 192TB additional with a cloud tier option, though this is more for disaster recovery and/or long-term storage. Along with backup and recovery, the DP4400 adds replication, deduplication, search, analytics and instant access and restore. This is all done and managed through an HTML5 interface that is not terribly difficult to manage. The appliance has NVMe storage that acts as a metadata cache for Avamar assisting it with instant access for rapid VM recovery. The Dell EMC IDPA DP4400 also integrates with AWS for cloud DR. 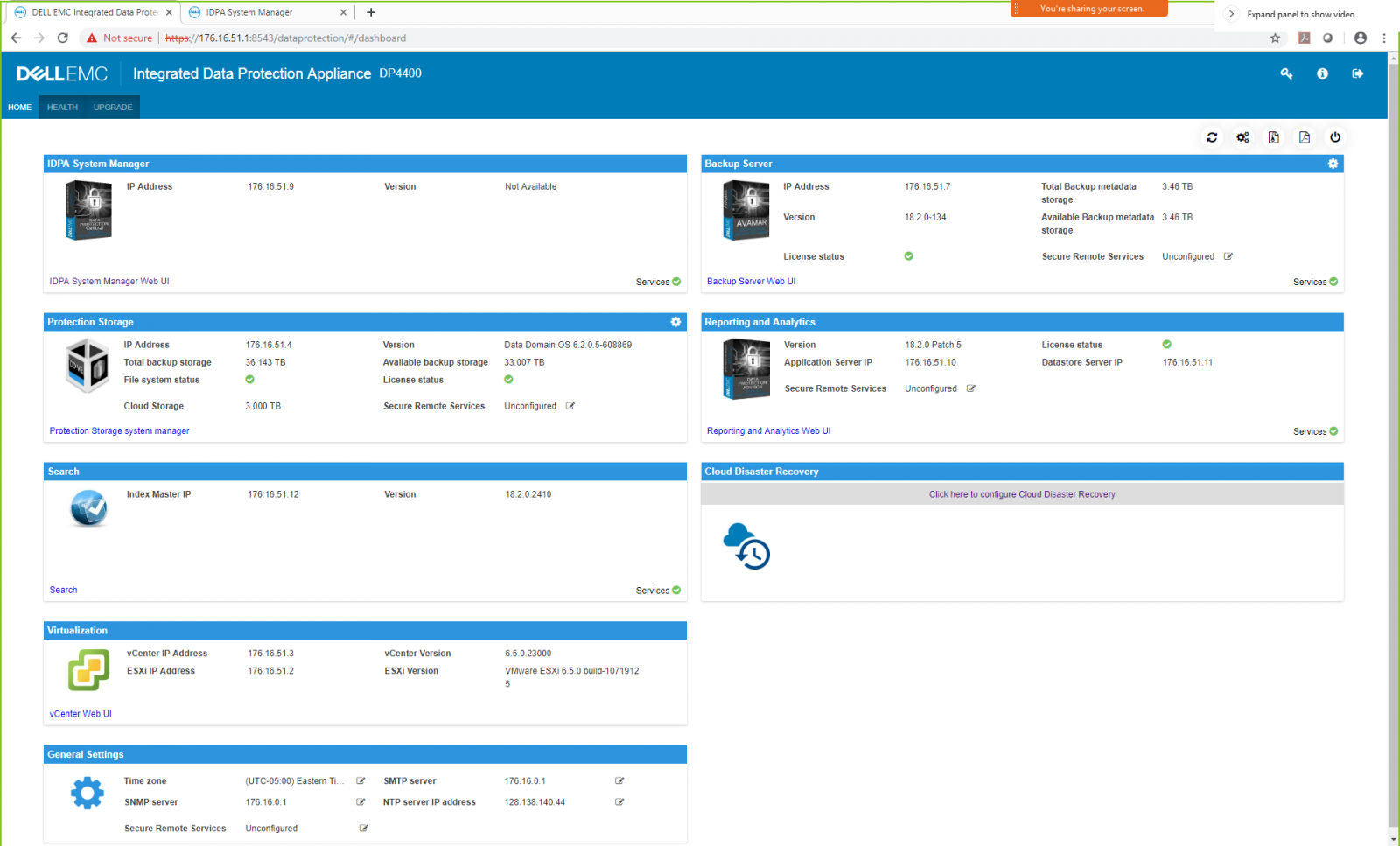 The IDPA DP4400 gives users more than enough tools to manage their backup data, even if it is not as smooth as some of the other interfaces offered by Dell EMC. Through the course of our review the platform got a much needed update bringing SSO, which helped by not needing to remember the different usernames required for each application. The IDPA home screen gives a sense of all the various bits and pieces running underneath the hood of the DP4400, which gives it many of its strengths, but also some weaknesses in regards to its complexity. The best way to view the DP4400 is as its own hardened VMware ESXi host, operating a number of VMs with shared storage across an array of applications. It gives users the feature set of a much larger backup stack, but contained inside a single 2U server. The benefit is consolidation for organizations requiring the full feature set it can offer at remote locations, but for an average small to medium business the complexity could be overwhelming.

Overall the DP4400 slots into a position where if you are an existing Avamar shop and need an appliance at the edge, this system works well. Going in with the experience required to manage it makes the experience much better. If you are a net new customer though, products such as the new PowerProtect might be a more straightforward and simple alternative within the Dell EMC portfolio.