The Dell EMC PowerEdge C6525 is a 2U server designed to address the need for high-performance dense-computing environments, such as HPC workloads. As the name/number ends in a “5” this indicates The C6525 is an AMD EPYC-based server, supporting both the 7002 and 7003. The latter goes along with higher performance (more cores and threads), more RAM capacity, and PCIe Gen4 capabilities. The C6525 has four nodes that allow two AMD EPYC CPUs each for grand totals of 512 cores, 1024 threads, and up to 8TB of memory in the 2U cluster.

The Dell EMC PowerEdge C6525 is a 2U server designed to address the need for high-performance dense-computing environments, such as HPC workloads. As the name/number ends in a “5” this indicates The C6525 is an AMD EPYC-based server, supporting both the 7002 and 7003. The latter goes along with higher performance (more cores and threads), more RAM capacity, and PCIe Gen4 capabilities. The C6525 has four nodes that allow two AMD EPYC CPUs each for grand totals of 512 cores, 1024 threads, and up to 8TB of memory in the 2U cluster. 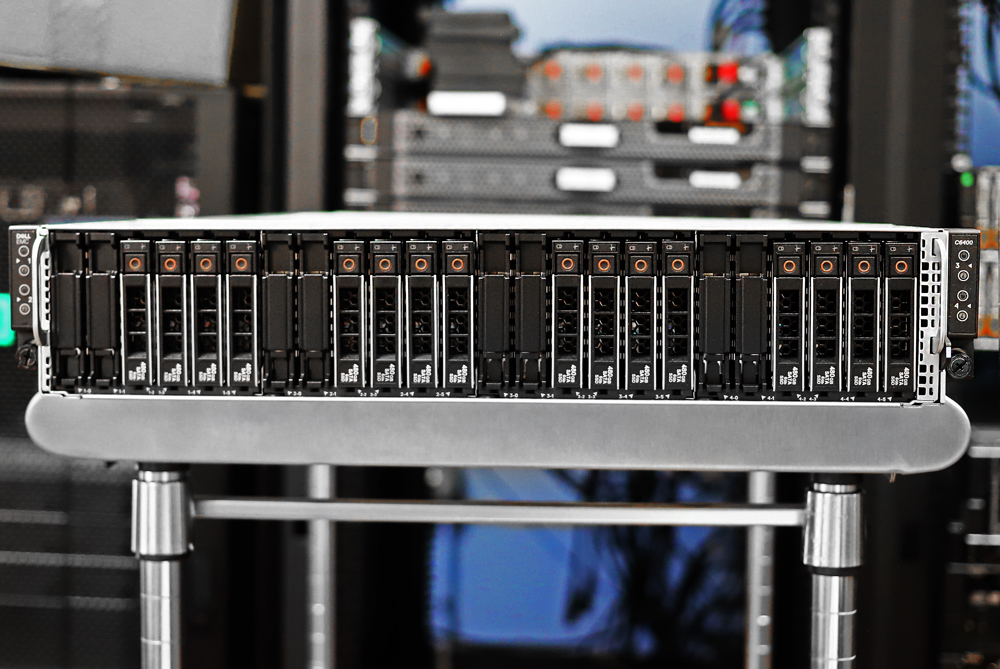 Being a C-series, this server is focused on the cloud. A lot of the secret sauce of this server lays in the design of the hardware, we’ll take a closer look at that in our design and build section. But in a nutshell, within this 2U form factor, Dell Technologies was able to put in four nodes that can have two AMD EPYC CPUs each or eight total. While this makes for really dense compute (great for digital manufacturing, research, and Web Tech), it can limit other options like total storage. Though with the given use cases that is less of a concern. 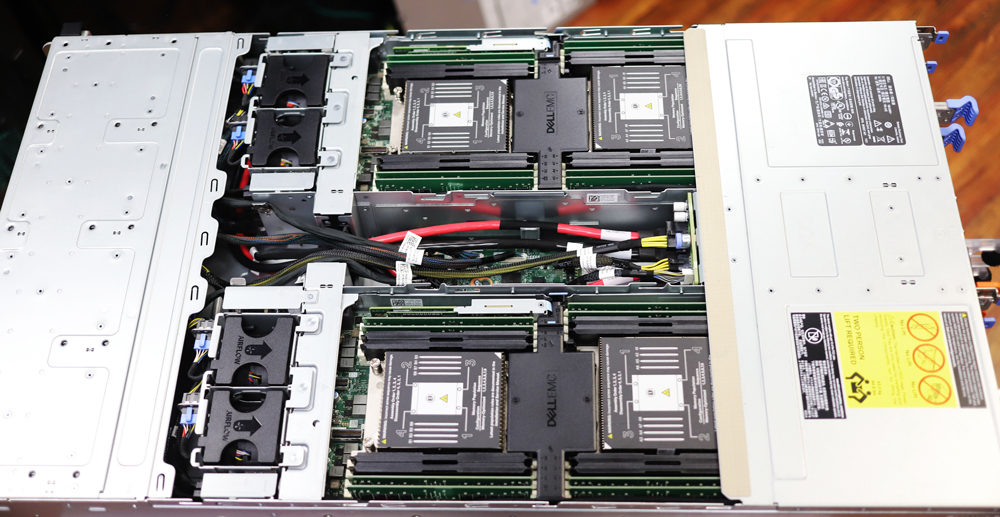 As stated, the Dell EMC PowerEdge C6525 is a 2U server. Depending on the configuration, the front of the server either has 24, 2.5” bays or 12 3.5” bays. Either side has a control panel with features such as a power button and LED indicators. There is an information tag on the right side. 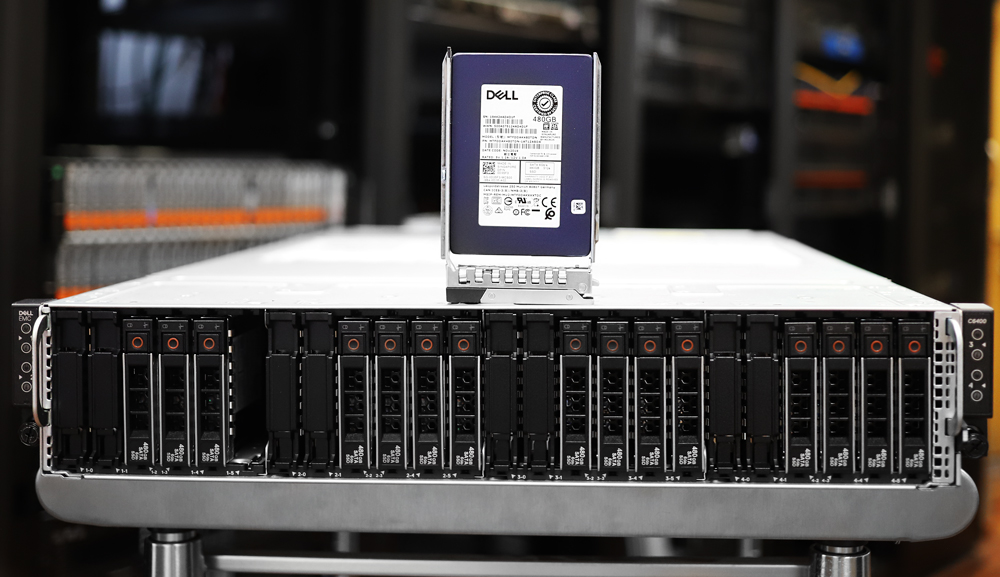 Flipping the server around to the rear we can see the four nodes. Each one has two PCIe slots at the top, a sled release handle in the middle, and a lock on the right. There is also an OCP 3.0 SFF card slot on the bottom right of each sled. For connectivity, there is a USB 3.0 port, an iDRAC or NIC Port, a Mini display port, and an iDRAC Direct Micro-USB port. The sled has a system identification LED and an EST tag as well. 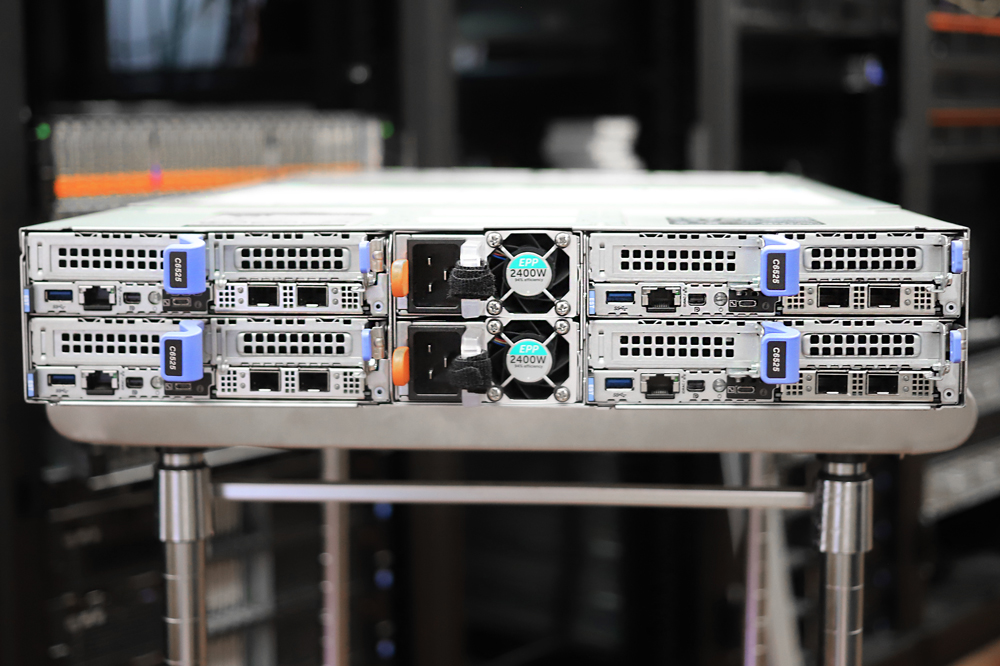 Pulling a sled out we can see the two processors and the surrounding RAM. There is an air shroud in between the CPUs. Near the CPUs is an M.2 riser for boot drives without taking away the use of the front drive bays. 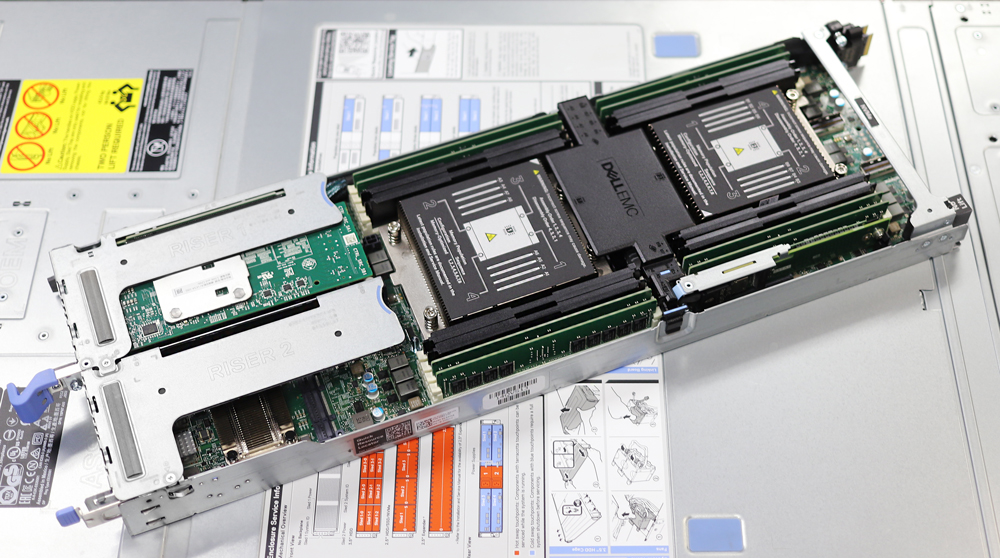 We’ve covered iDRAC several times in the past and went well in-depth here. We also used iDRAC for the management of the Dell EMC PowerEdge C6525. Each node is managed individually, without much awareness of surrounding nodes or chassis. This is in contrast to platforms such as the Dell EMC FX2 that include that layer. For this application, it doesn’t matter as much without shared resources between the nodes.

For hardware elements shared such as fan controls, the node with the highest demand wins in terms of cooling profile. If one node is hot but three are cool, the chassis will respond as if they are all hot. First up is the dashboard. Here users get a quick overview of everything including system help, information, task summaries, and recent logs. The ability to gracefully shutdown the server can be found here as well. 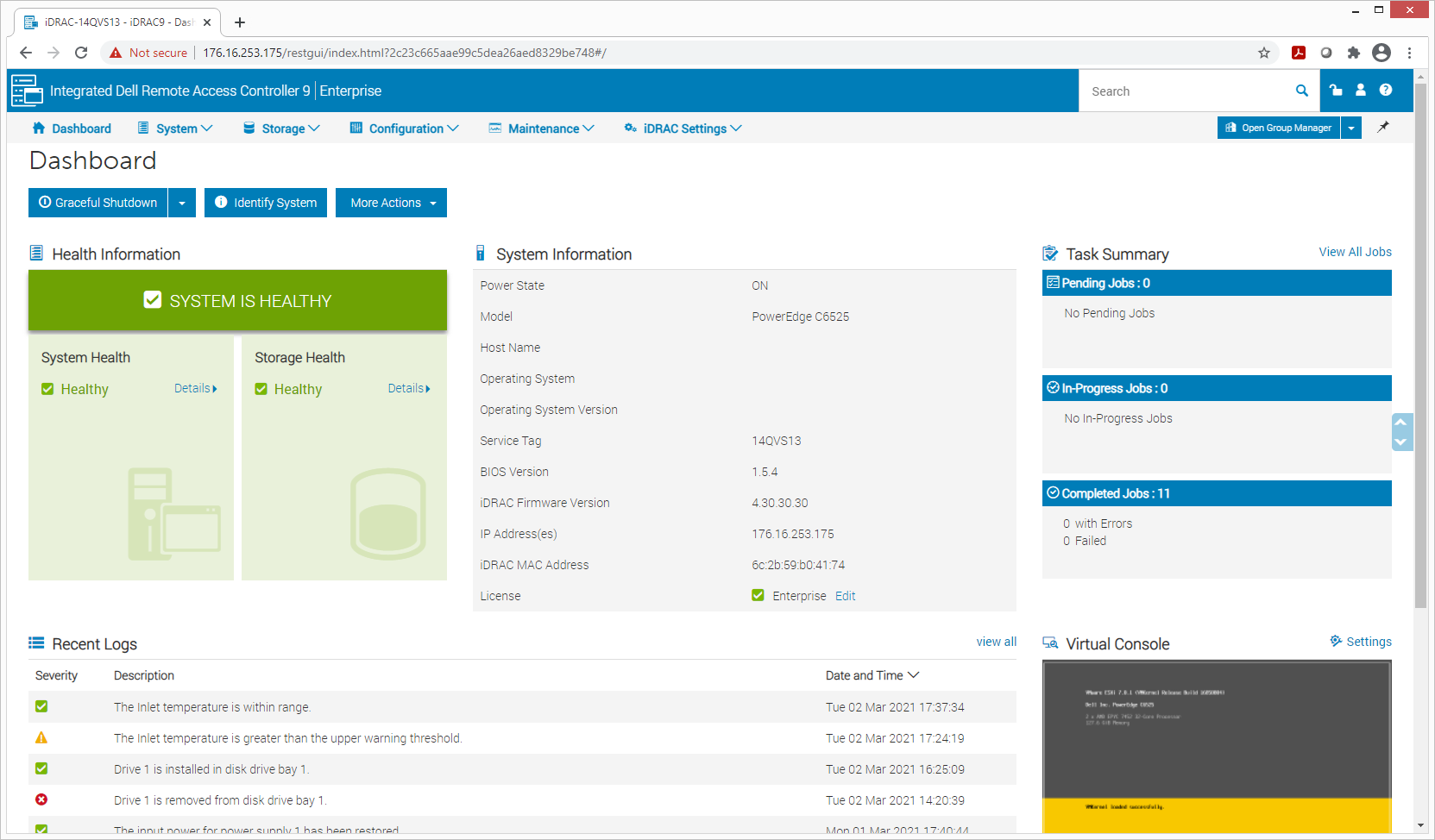 Under the System Tab, we can look at the various components. Clicking on CPUs/Accelerators we can see what CPUs we are running on each node (AMD EPYC 7452 in this case). 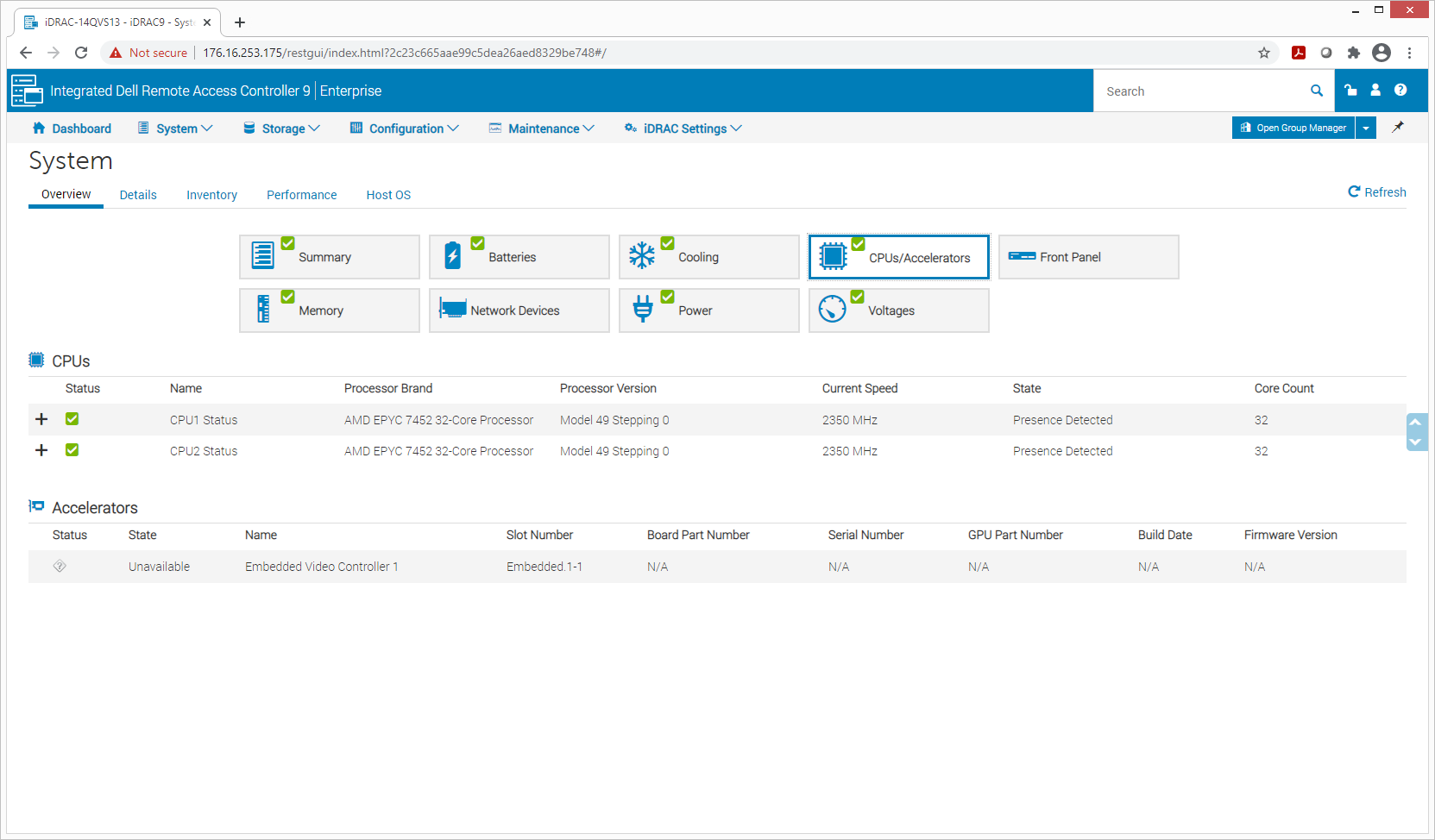 A big aspect of PowerEdge servers is their ability to keep cool while running high-performant parts that generate heat. While it can be set up for max performance, one doesn’t have to run the server that way at all times. Instead, users can go into the configuration and adjust the cooling configuration to fit their needs. 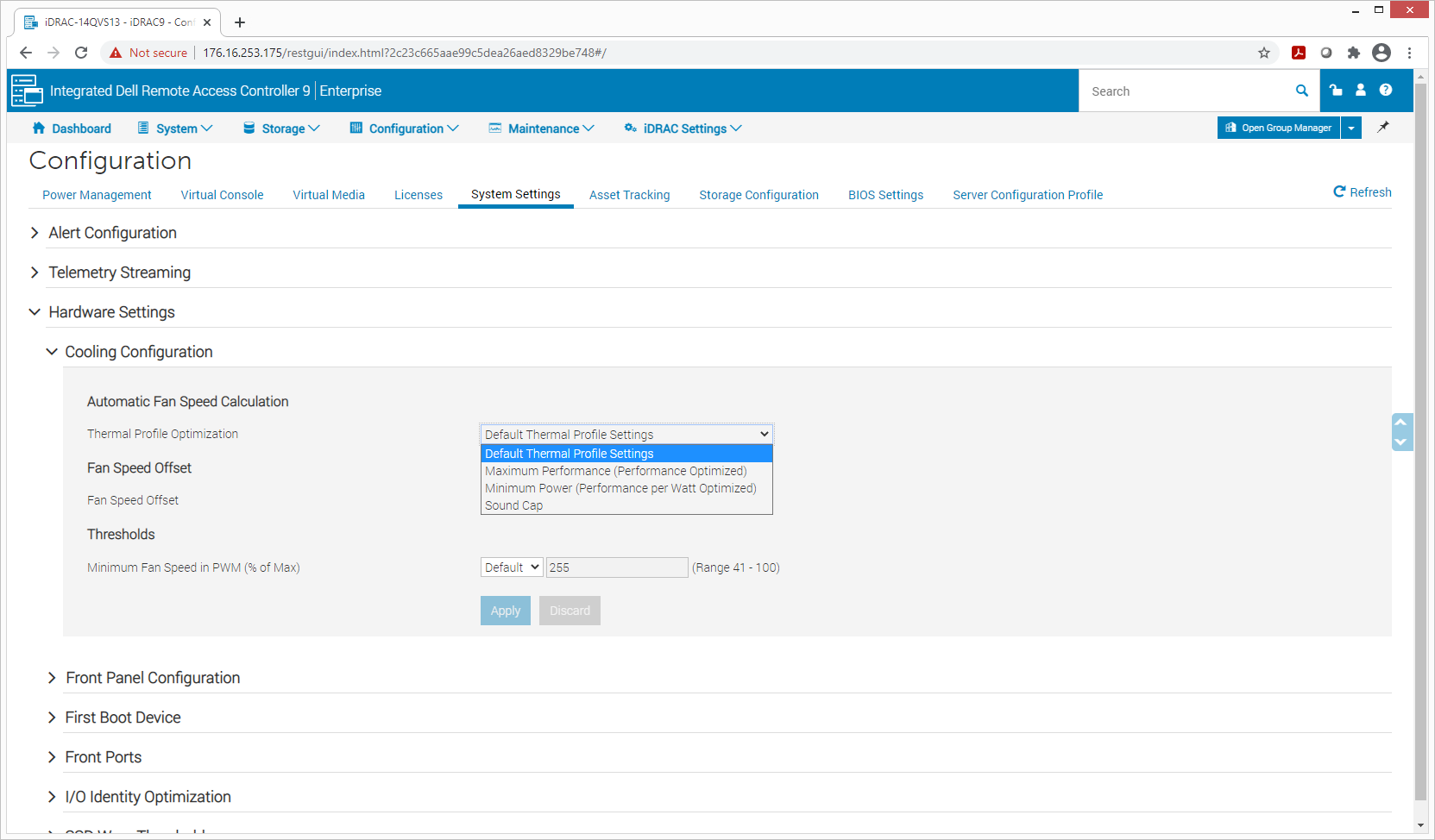 A way that Dell makes it easier to manage their platforms is using iDRAC to make BIOS-level changes to each node without having to manually go into the BIOS itself. Once the changes are scheduled, they will take effect at the next reboot. 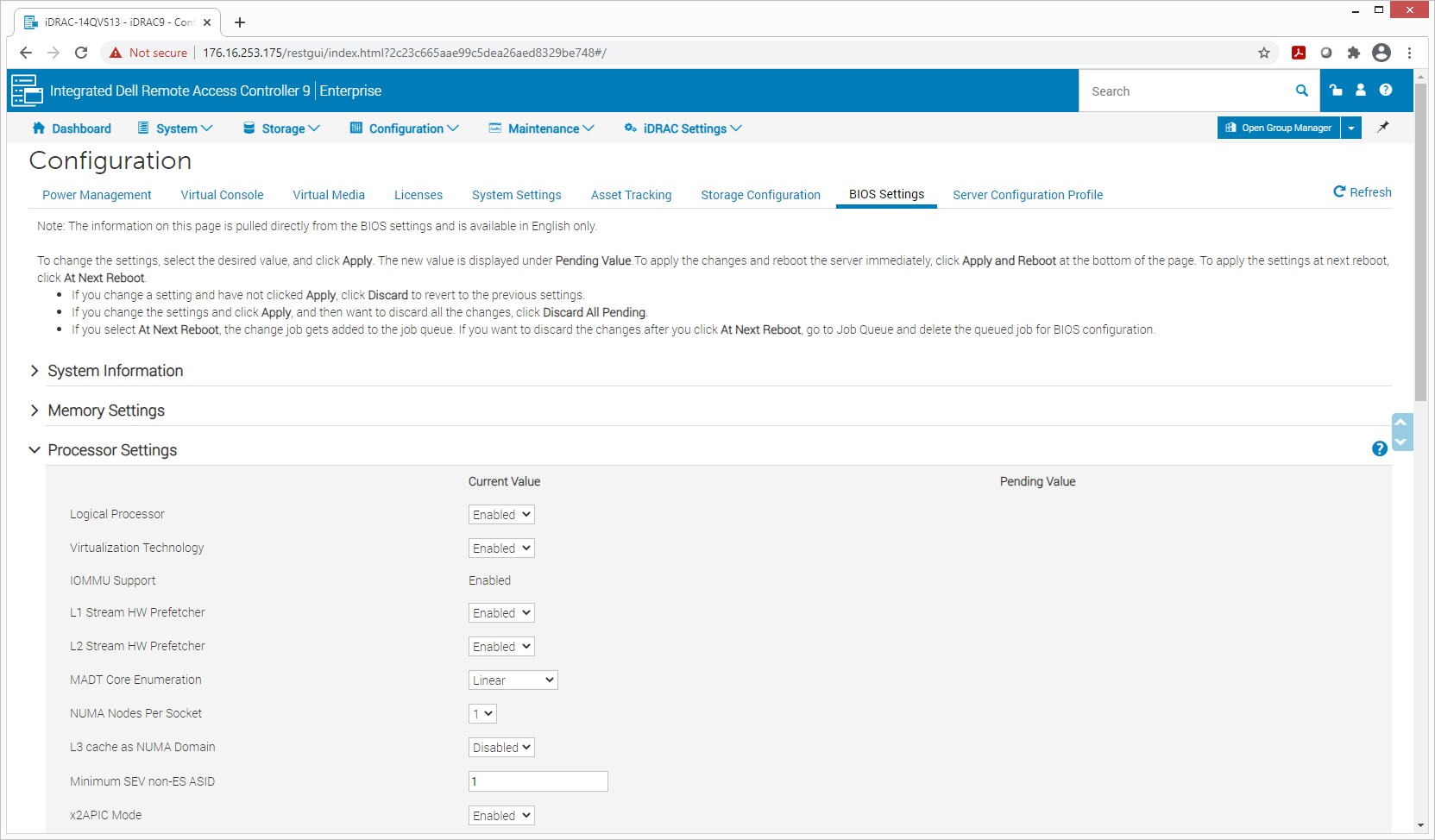 With the Sysbench OLTP we saw an aggregate score of 49,701 TPS with individual nodes hitting aggregates between 12,170 TPS to 12,606 TPS. Even without top-end CPUs and a modest amount of DRAM the Dell EMC C6525 offered huge performance in a 2U footprint.

With Average latency, we saw a total aggregate of 10.3ms with individual nodes hitting between 10.15ms to 10.51ms.

For VDBench performance, we look at each node and how it performs as well as aggregate.

Looking at random 4K read, all nodes performed more or less the same with a single node hitting a peak of 1,320,861 IOPS at a latency of 191µs. An aggregate of all the nodes would be roughly 5.2 million IOPS.

In 4K random write the SSDs in each node didn’t track as close to one another. Node 4 had the highest peak at 411,075 IOPS at a latency of 337µs. A peak aggregate pushes to over 1.2 million IOPS.

Switching over to sequential work with our 64K workloads, in read we once again saw the nodes tracking much closer together. The highest peak of a single node was about 107K IOPS or 6.7GB/s at a latency of 488µs. The aggregate score would be about 428K IOPS or 26.8GB/s.

With SQL 90-10 the nodes more or less traveled together until the end where node 4 pulled ahead once more with a peak of 391,425 IOPS at a latency of 154µs. Combined peaks come to over 1.5 million IOPS.

SQL 80-20 saw the nodes perform a little differently. Node 2 peaked the highest with 340,626 IOPS at a latency of 176µs. Combine, all nodes bring the performance over 1.34 million IOPS.

Next up are our Oracle workloads: Oracle, Oracle 90-10, and Oracle 80-20. Starting with Oracle, the four nodes tracked with each other ok with trusty number 4 peak the highest with 327,398 IOPS with a latency of 188µs. This takes the total performance over 1.26 million IOPS.

Oracle 90-10 had the nodes more tightly aligned for the most part though node 4 once again peaked the highest with 325,058 IOPS at a latency of 132µs. Combined performance comes to over 1.25 million IOPS.

Looking at Oracle 80-20 the nodes are spaced out a bit more here but more or less fall into the same line. Node 4 takes the top with 297,033 IOPS. The aggregate performance comes out to over 1.1 million IOPS.

Next, we switched over to our VDI clone test, Full and Linked. For VDI Full Clone (FC) Boot, all four nodes ran pretty close together with lucky node 4 peaking the highest 312,464 IOPS and a latency of 202µs. Combining the peaks brings us to over 1.2 million IOPS.

With VDI FC Initial Login the node really pulled apart here at the end. Node 4 had the highest peak with 84,792 IOPS at a latency of 449µs. The combined performance comes to over 331K IOPS.

For VDI Linked Clone (LC) Boot, the node once more ran very close together in performance. A single node peaked at 158,820 IOPS at a latency of 196µs. The combined performance came out to over 628K IOPS.

VDI LC Initial Login saw a bit of difference in node performance near the end The single node top peak was 48,484 IOPS at a latency of 272µs. The aggregate performance brings us over 181K IOPS.

The Dell EMC PowerEdge C6525 is a 2U server that is aimed at cloud deployments. The server is dense, packing four nodes,  and equipped with AMD EPYC CPUs (the one tested here with second-generation but Dell is offering a C6525 with third-generation EPYCs as well) with a potential total of 512 cores and 1,024 threads. The CPUs allow for a total of 2TB of DDR4 3200 MT/S memory per node. Each node can house two AMD EPYC processors, two PCIe bays, an OCP 3.0 slot and an onboard m.2 SSD for boot. This makes for all kinds of compute, however, there is a limitation to how much storage one can fit in the server. With a 2.5″ drive chassis configuration, each node can be assigned 6 drives with up to two of those being NVMe with the appropriate backplane.

For application performance, we looked VDBench. We tested both individual nodes and looked at the score in aggregate. This gives users an idea of how each part works as well as a picture of the total performance. In Application Workload Analysis we only ran Sysbench. In transactional we saw an aggregate score of 49,701 TPS. In average latency, the server gave us an aggregate latency of 10.3ms. With our worst-case scenario, the C6525 had an aggregate score of only 18.3ms.

The Dell EMC PowerEdge C6525 is a dense, 2U server that can house four nodes and up to eight AMD EPYC processors. The server can deliver tremendous performance in its smallish footprint, but does so at the cost of storage. Ultimately, the C6525 is aimed at compute-heavy, cloud use cases that can benefit from this elite combination of power and density. For those who need such a combo, the C6525 makes for a phenomenal option.