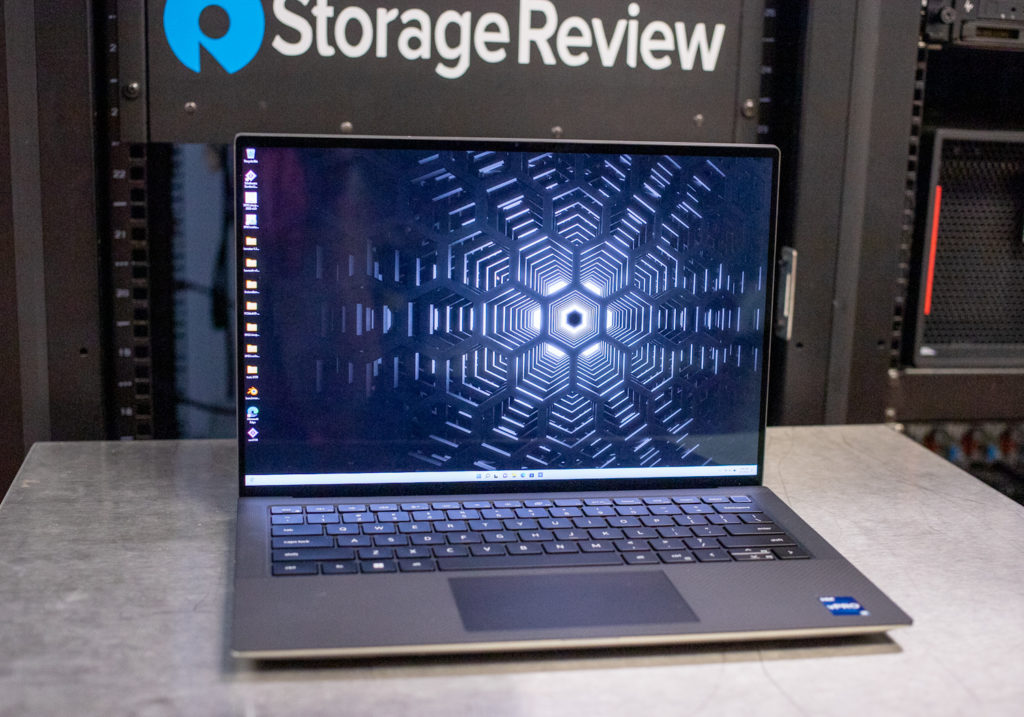 Graphics options start with integrated Intel graphics and top out with the 4GB Nvidia RTX A1000, an entry-level 2D and 3D solution. Memory options go up to 64GB of DDR5-5200. The base model has just 8GB of RAM, which is disappointing since the memory is soldered i.e., not upgradeable. A laptop of this caliber should have at least 16GB standard.

The Precision 5470 has one M.2 Gen4 slot for storage. Dell strangely offers a mix of Gen3 and Gen4 drives; taking full advantage of this platform means opting for the latter. The top storage option is a 4TB Gen4 NVMe SSD.

The Precision 5470’s full specifications are as follows:

The Precision 5470 rocks a sleek, modern business look. The display’s bezels are minimal, and the palm rest has an attractive carbon fiber finish. The lid and most of the chassis is a strong metal. Picking this machine up one-handed doesn’t cause any flex or creaks. 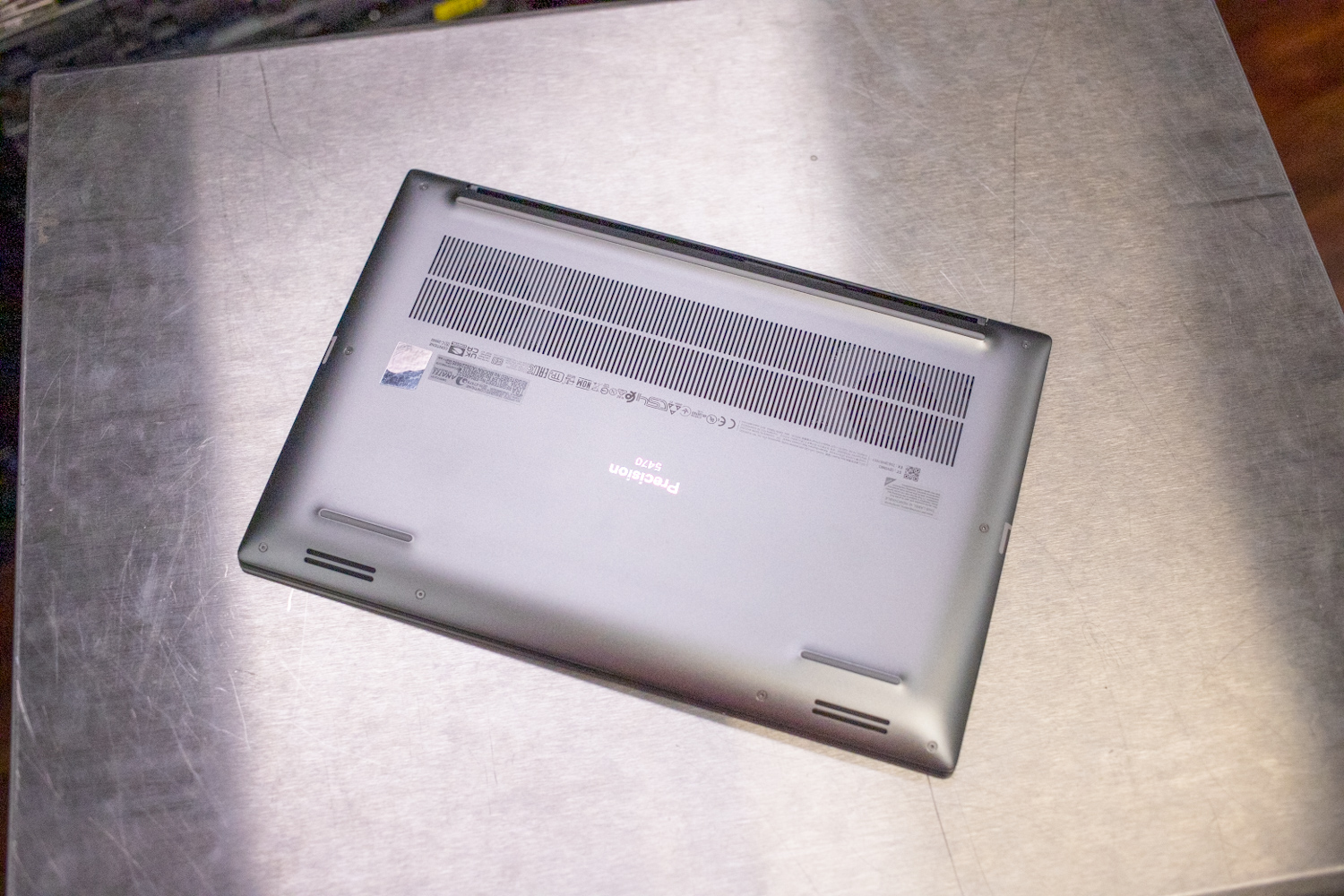 Our unit’s screen is the upgraded QHD+ (2560×1600) panel, with touch support and a high 500-nit brightness rating. Dell advertises it as low blue light. An IR camera is just above. The FHD+ screen is also 500 nits but doesn’t support touch.

The keyboard keys are full-size minus the function row and the half-height up and down arrows. The white backlighting contrasts nicely against the black keycaps. Typing feel is slightly rubbery but solid and satisfying. If you’re coming from an older laptop, it might take a minute to realize that the power button is a keyboard key (top right corner) and that it doubles as a fingerprint reader. This laptop also has an IR camera for facial recognition. 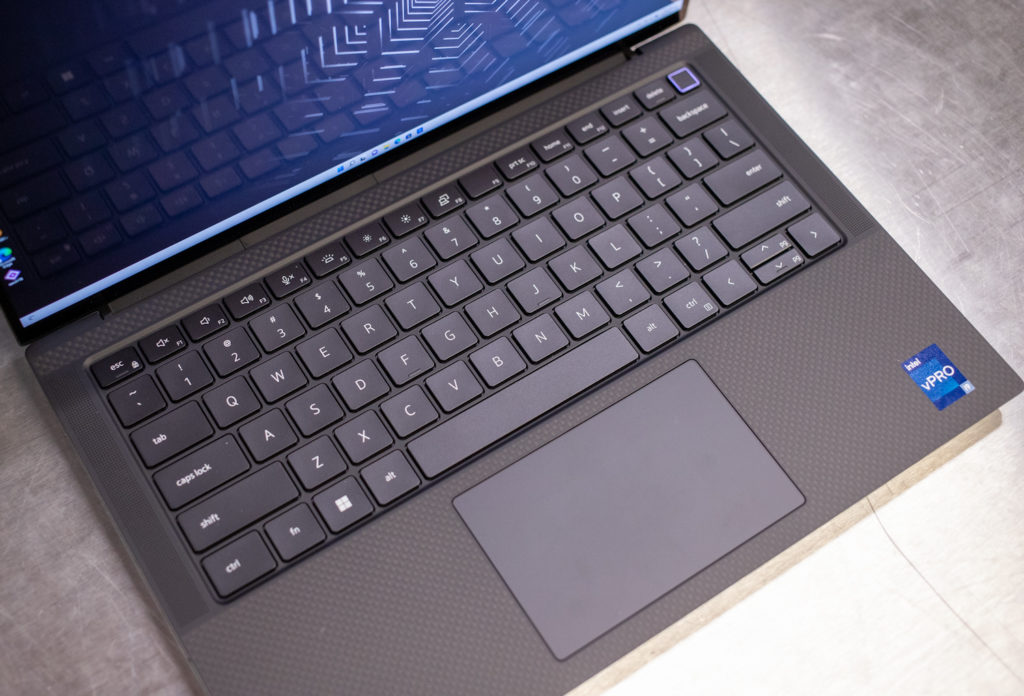 The touchpad is proportionally large enough for a 14-inch display. It has no physical buttons; simply press the surface to physically click. There’s no track stick as you would find on a Lenovo ThinkPad.

The port selection consists of four Thunderbolt 4 (USB-C) ports (two each on the left and right edges), a MicroSD card reader, an optional SmartCard reader, and an audio jack (headphone/microphone). 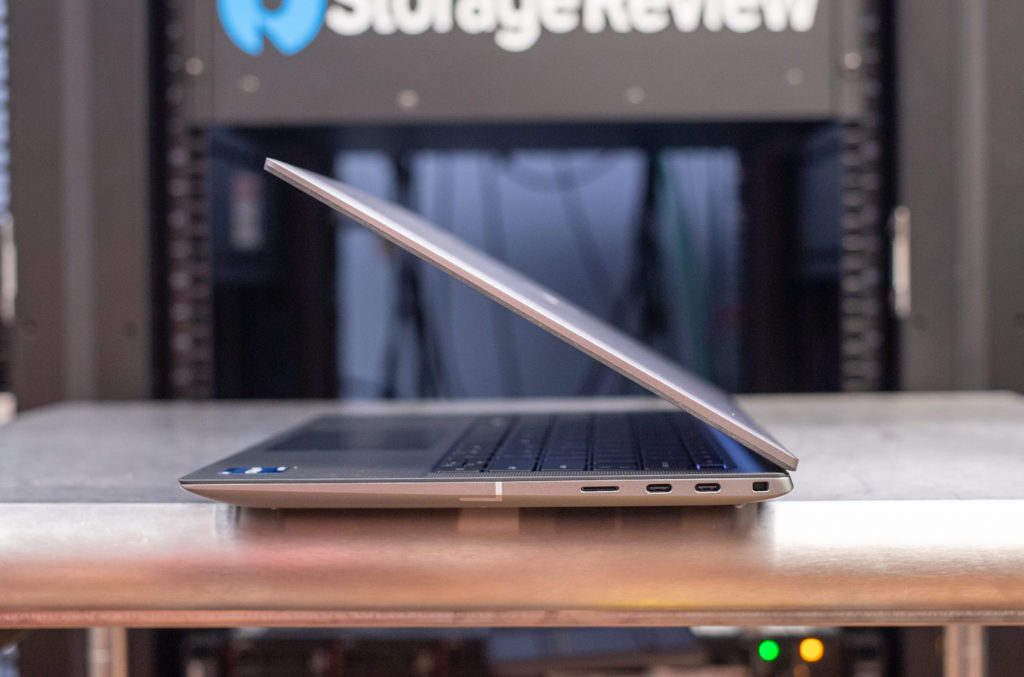 There are no traditional USB Type-A ports or video outputs, so you may need to budget for adapters. All the Thunderbolt 4 ports support DisplayPort over USB-C and any of them can be used to power the Precision 5470 with its included adapter. 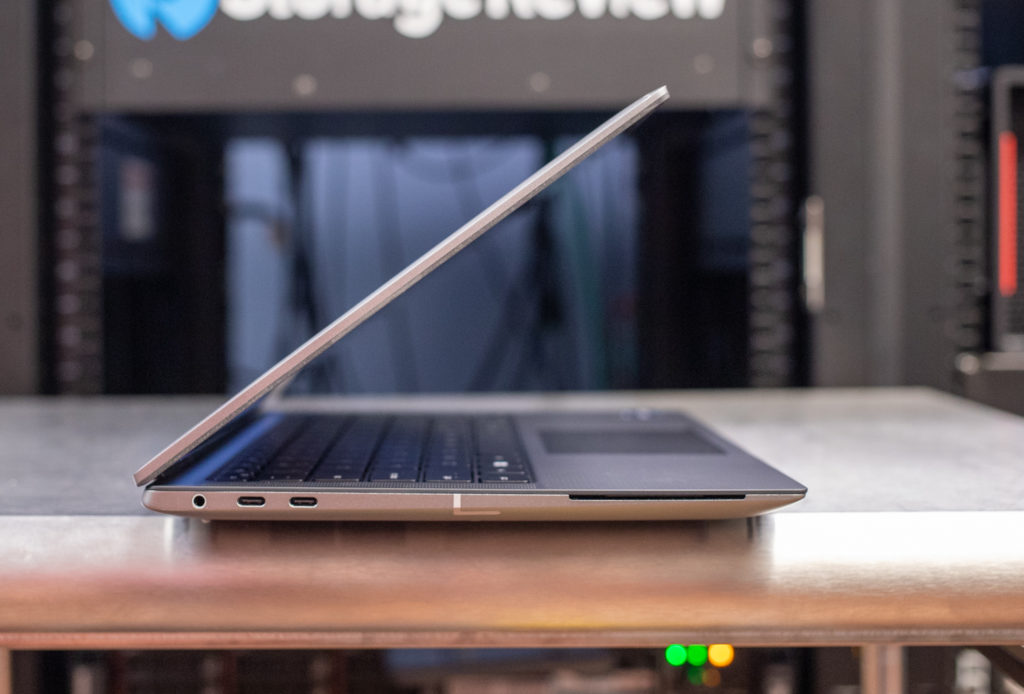 We are testing the Precision 5470 configured as follows:

This nearly maxed-out configuration rings up at a lofty $3,338 through Dell.com, but that’s the single unit cost; business buyers will get a discount. The one-year standard warranty is too short for a laptop this expensive.

The Precision 5470 faces the HP ZBook Firefly 14 G9 (see our Firefly G8 review) and the Lenovo ThinkPad P14s Gen 3. Those machines stick with lower-wattage Intel Core U- and P-class processors instead of the 45-watt H-class chips in the Dell. The HP offers RTX A500 graphics while the Lenovo tops out with the Nvidia T550, both lower on the ladder than the RTX A1000. That said, at least the Lenovo is far cheaper; I configured it at $2,052 with a 14-core Core i7-1280P.

What else can you get for around the three-thousand-dollar mark? Dell’s larger Precision 5570 was $3,229 as I typed this, with mostly the same specifications as our Precision 5470 but more capable 8GB RTX A2000 graphics. It’s all about how much you value portability.

Before we test, a word on heat and cooling. Systems that jam this much power into a small body run the risk of having issues with thermals under load. Our first review unit suffered from severe overheating and would shut off during our testing. Its surface temperatures reached over 140 degrees F, which is unprecedented for a laptop. (Ideally, surface temps stay 110 degrees or below so they are safe to touch.)

We eventually found out that the laptop had a sticker blocking the entire air intake. Our second unit, shown below, didn’t have that sticker. Dell insisted the first unit was a production model, so we are cautioning buyers to check their units before turning them on and repeating our experience. In the photo below, the unit on the top has a sticker right under the intake grills, while the lower system has the fans faintly visible without this sticker present. 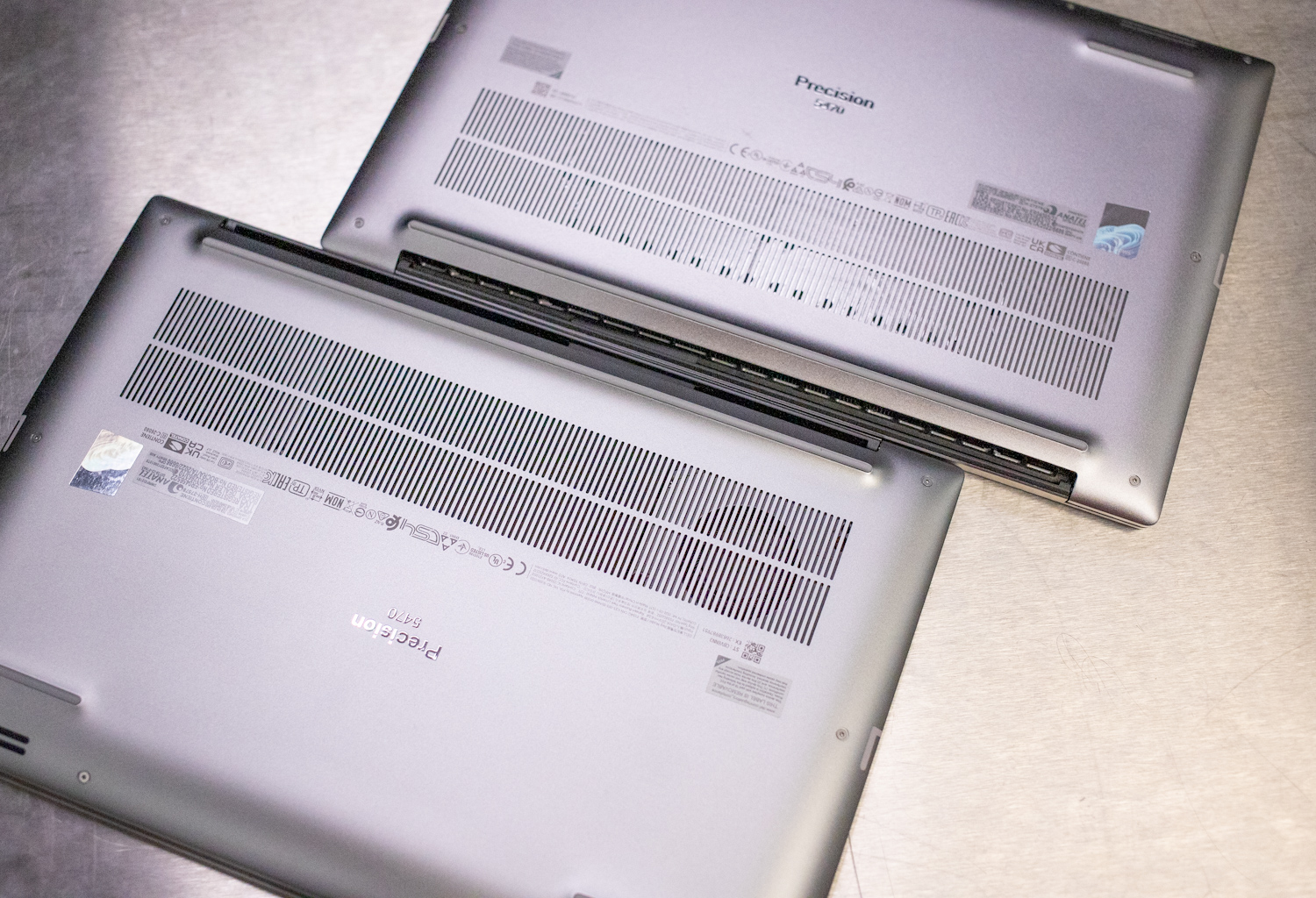 The temperatures were much better with our new unit, under 110 degrees F top and bottom. The noise levels weren’t too bad, either. The fans are nearly audible at idle though they sound like a light breeze running full tilt. 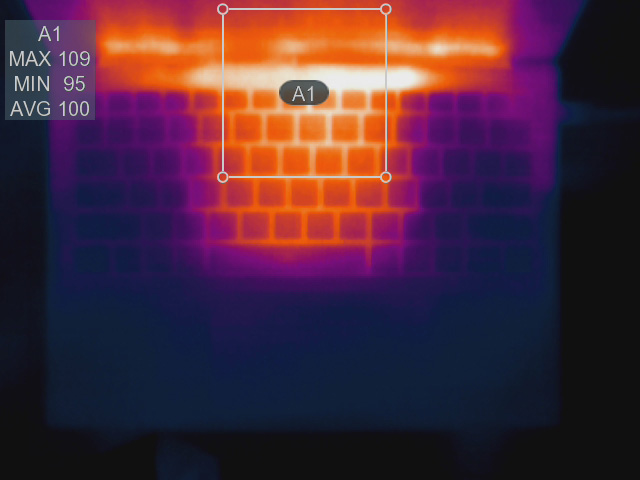 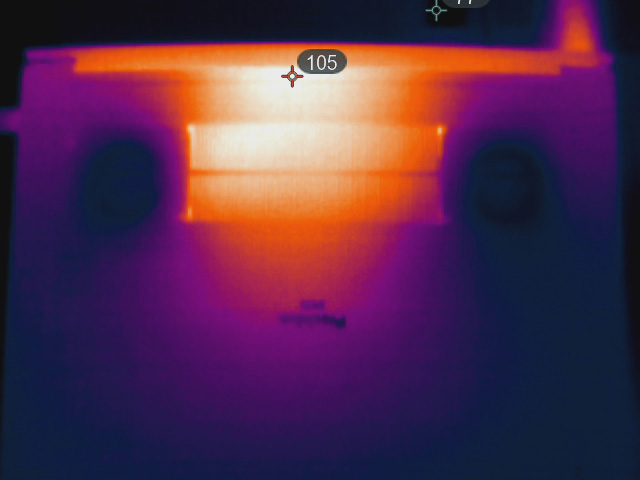 We are using the Dell Precision 7560 for benchmark comparisons. It’s a much bulkier 15.6-inch laptop but will illustrate the performance you can get by going with a larger laptop like that. It’s configured as follows; the critical difference versus the Precision 5470 is its stronger 8GB RTX A4000 graphics card. The 5470 is also running at a lower QHD+ resolution versus the UHD resolution of the 7560.

The Philly model is last; the Precision 5470’s numbers dropped off though its minimum was higher.

Last is the Portland animation. I don’t have results for the Precision 7560 in this test, but the Precision 5470’s indicate this test isn’t as difficult to run as the other ESRI animations we tested.

We also look OctaneBench, a benchmarking utility for OctaneRender, which is another 3D renderer with RTX support that is similar to V-Ray. I don’t have numbers for the Precision 7560, but the Precision 5470 scored as follows. Higher scores are better.

LuxMark is an OpenCL cross-platform benchmarking tool from those who maintain the open-source 3D rending engine, LuxRender. This tool looks at GPU performance in the areas of 3D modeling, lighting, and video work. For this review, we used the newest version, v4alpha0. In LuxMark, higher is better when it comes to the score. The Precision 5470’s scoring suggests the entry-level nature of its RTX A1000 GPU.

The excellent 7-Zip file archive tool has a handy built-in compression benchmark. We ran 10 passes using a 128MB dictionary size. Higher numbers are better. As we only recently added this test to our regimen, I am also only showing numbers for the Precision 5470.

Our last test is the popular SiSoftware Sandra 2021 suite. Higher numbers are better in all subtests. This test is also new to our regimen, so I have numbers only for the Precision 5470.

The Dell Precision 5470 is a highly capable 14-inch workstation laptop. Its Intel Core H-class processor makes it a particularly strong performer in CPU-specific workloads. It also has an attractive design, solid build quality, an excellent screen, and comfortable input devices.

On the flip side, the Precision 5470 has a minimalist port selection, with no traditional USB Type-A ports or dedicated video outputs. It’s also difficult to understand why a laptop of this caliber comes standard with just 8GB of RAM, which isn’t upgradeable, so the base model should be avoided at all costs. Additionally, we had overheating issues with our first unit because of a misplaced internal sticker, though our second unit ran without issues.

Graphics performance is the primary weakness for a laptop this small; our testing suggests the Precision 5470’s Nvidia RTX A1000 graphics card is suitable for entry-level 3D work but would likely struggle with complex modeling. This laptop also accepts just one M.2 Gen4 storage drive. Going up to a larger 15- to 16-inch workstation laptop would allow for more powerful graphics and additional storage drives.

Naturally, larger laptops aren’t as portable, and that’s why the Precision 5470 stands out as a viable option for mobile performance in a very compact form factor.