The VNXe1600 is a 2U storage array supporting 10G iSCSI and 16Gb FC from EMC that integrates VNX2 controllers and hybrid storage into a package offered at street prices below $9,000. These prices are unprecedented for a complete VNX storage solution, marking another step deeper into the SMB market for EMC. This direction was first signaled with the launch of the VNXe3200, the basis for this new SMB-oriented VNX2 array.

The VNXe1600 is a 2U storage array supporting 10G iSCSI and 16Gb FC from EMC that integrates VNX2 controllers and hybrid storage into a package offered at street prices below $9,000. These prices are unprecedented for a complete VNX storage solution, marking another step deeper into the SMB market for EMC. This direction was first signaled with the launch of the VNXe3200, the basis for this new SMB-oriented VNX2 array.

The VNXe1600 is powered by Intel Xeon E5 2.6Ghz dual-core CPUs in both of the array’s Storage Processor modules and, like the VNXe3200, the VNXe1600 offers both Fibre Channel and 10GbE connectivity options. When we had the first had the opportunity to work hands-on with the VNXe3200, it was the first and only VNX offering to utilize this 2U form factor that incorporated the controllers with the storage. The VNXe1600 underscores EMC’s intentions to bring VNX to a new market segment by streamlining the VNXe3200 into an offering even more affordable to midmarket customers.

The VNXe1600 is available with in two different 2U chassis options: a 25-drive array with 2.5” bays and a 12-drive array with 3.5” bays. Both options incorporate dual VNX Storage Processors (SPs). Each VNXe1600 SP includes two 6Gb/s x 4 SAS ports for expansion via EMC Disk Array Enclosures (DAEs). Mirroring the VNXe1600 array chassis configurations, the available DAEs include a 12-drive enclosure with 3.5” bays and a 25-drive enclosure with 2.5″ bays. The VNXe1600 can manage up to 200 disks depending on the expansion enclosures used. DAE types can be mixed within a deployment.

When compared to the VNXe3200, the VNXe1600 array has lighter CPU and memory specifications along with some streamlining of the available data services. One other key change made in scaling down the VNXe3200 is that the VNXe1600 supports block storage only rather than the unified block and file services of the VNXe3200.

We learned during a visit to EMC’s data center in Hopkinton, MA to benchmark the VNX5200 to that nearly 70% of VNX2 systems are now shipping in hybrid flash configurations. The VNXe3200 review includes a more comprehensive description of MCx and its role as a centerpiece of VNX2.

VNXe1600 drives use type, capacity, and speed labels to simplify visual identification. The first four drives in the VNXe1600 are system drives. The 12-drive 3.5” form factor uses a single LED for power and status, while the 25-drive 2.5” array uses separate LEDs for this function. VNXe1600 drive caddies include both metal and plastic components and are secured via a carrier with a handle and a latch and spring assembly.

The VNXe1600 incorporates two VNX2 Storage Processors (SP), the macro-level component that provides compute and I/O for the array. Each VNXe1600 SP consists of a CPU module with an Intel Xeon Dual Core 2.6-GHz processor and one DDR slot with 8GB of memory per SP. These storage processors are redundant along with the array’s power supplies, fans.

The VNXe1600 offers dynamic failover and failback and is designed to allow software and hardware upgrades and component replacement while operational. Storage Processors can be removed individually from the Disk Processor Enclosure (DPE). Each SP has three fan modules above it; at least two of the three fans on each SP must be active or the system will save the cache and shut down.

Each Disk Processor Enclosure (DPE) has two power supply modules. A 3-cell Lithium-Ion Battery Backup Unit (BBU) is located in each SP to provide enough power flush the VNXe1600’s SP cache contents to internal mSATA storage in the case of a power failure or SP removal from the chassis. This typed of attention to detail is a clear differentiation point between EMC’s SMB equipment and most of the other platforms currently competing in the space. The 32GB mSATA drive is located underneath each SP and contains a partition that holds the boot image that is read upon initial boot up as well as storage for cached data. If one mSATA drive becomes corrupted it can be recovered from the peer SP.

On the rear of the VNXe1600, two integrated Converged Network Adapter (CNA) ports can be configured at the factory for 10GbE Optical iSCSI or 8- or 16-Gb/s Fibre Channel. The CNA supports 10G optical SFP and 10G Active/Passive TwinAX cables and the Fibre Channel CNA module supports either 8- or 16Gb/s SFPs.

The rear of the array incorporates two, four-lane 6Gb/s mini-SAS HD ports for expansion. The VNXe1600 includes one LAN management port and a serial over LAN service port. The rear also provides access to one mini-USB port, an NMI debut port, indicator LEDs, and access to a power supply module and three cooling fans.

The VNX family of products use EMC’s Unisphere management software which we find offers a rewarding combination of accessibility and depth. Unisphere is streamlined enough to configure and manage at the scale of an individual array and is also designed for managing many machines at the datacenter and multi-site enterprise scale. Access to EMC’s management ecology is one of the selling points of this solution and the Unisphere interface is clean and had a straightforward learning curve for someone familiar with other storage array operating and management systems. 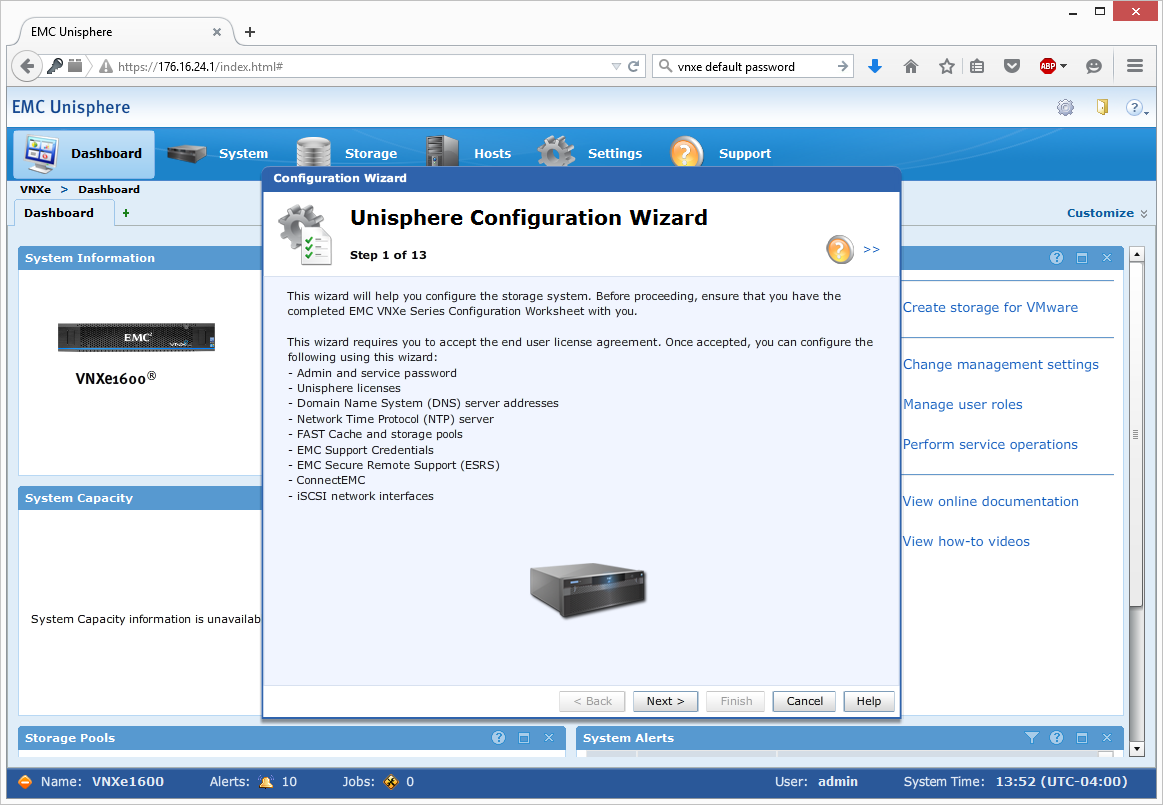 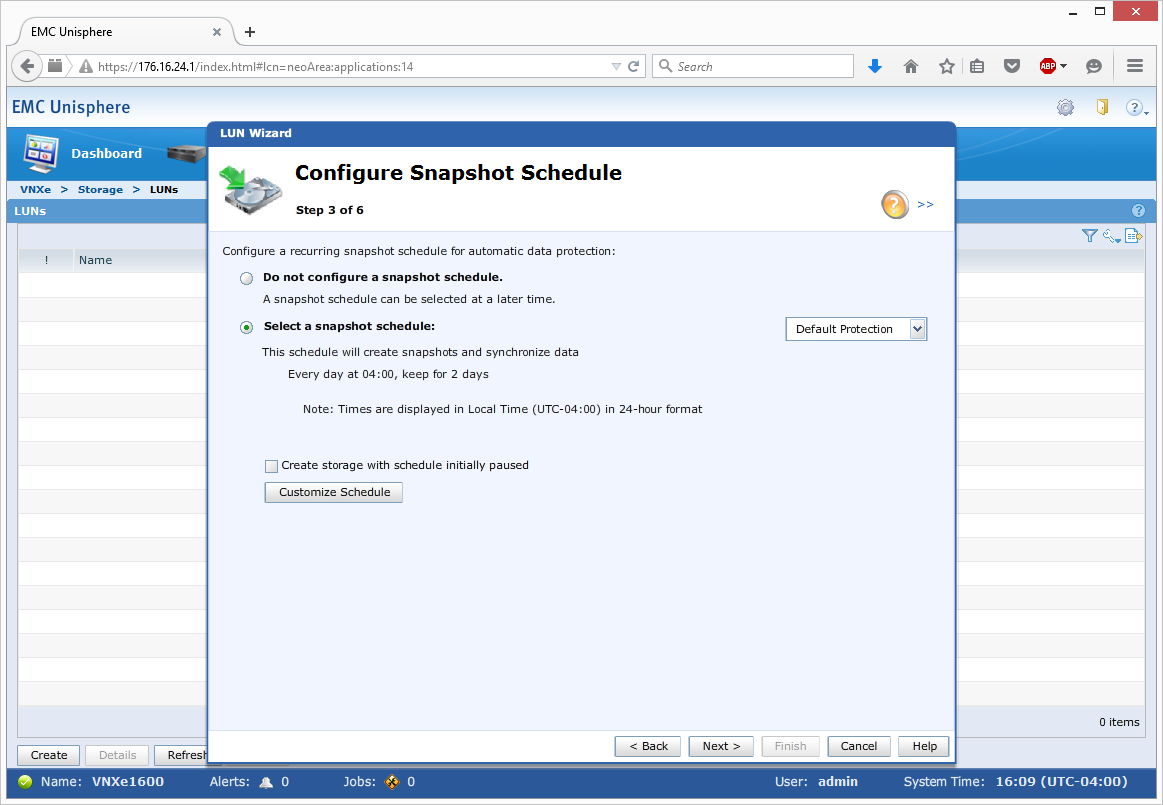 This snapshot technology is designed for quick copies of production data with support for automated scheduling and deleting of snapshots within configurable parameters such as available storage space. The VNXe1600 builds its native asynchronous replication support for LUNs, LUN Groups, and VMware VMFS Datastores on top of the VNX2 snapshot technology in order to provide automatic and manual synchronization. These snapshots use “redirect-on-write” technology with writes sent to a new location within the same pool, and support for hierarchical snaps (“snap of a snap”). 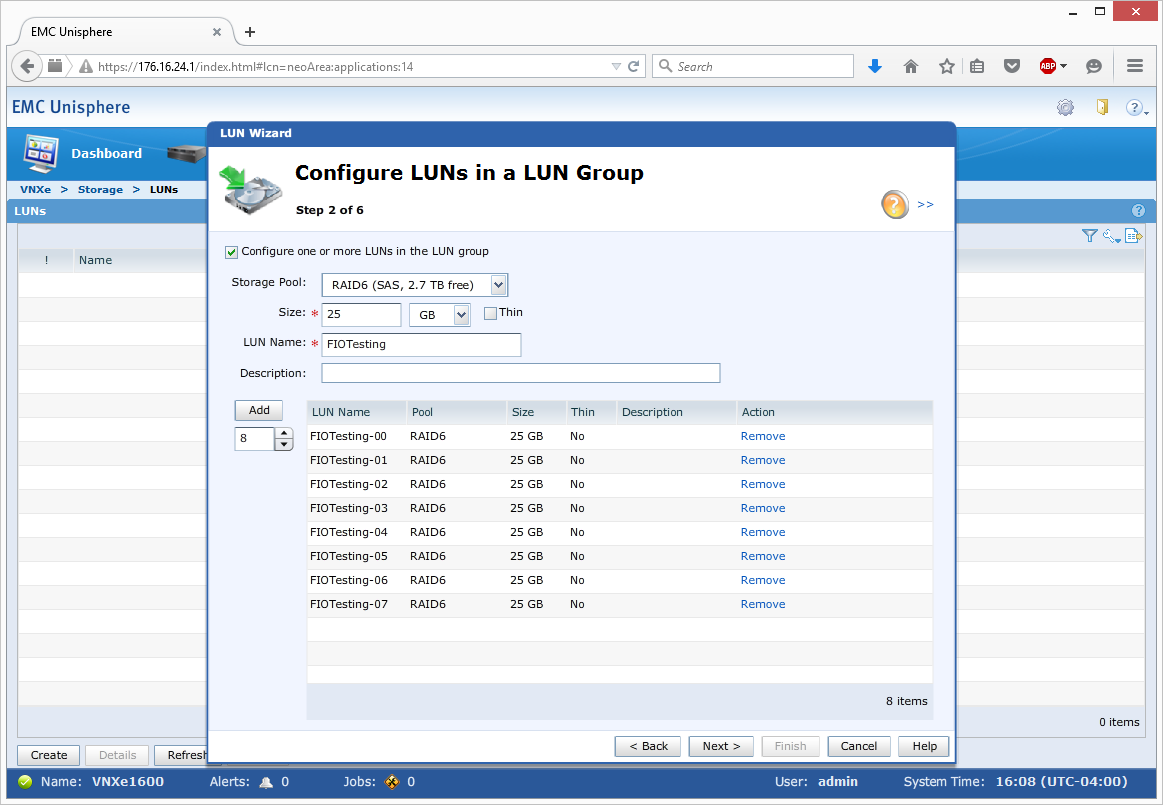 The VNXe1600 uses pool-based provisioning for Flash, SAS, and NL-SAS drives with no support for classic RAID groups. For the VNXe1600, all storage pools have to be composed of drives from the same storage tier: Flash, SAS or NL-SAS. Multiple storage pools may be created, each with a specific drive technology. The VNXe1600 does not support multitier pools or EMC’s FAST VP. 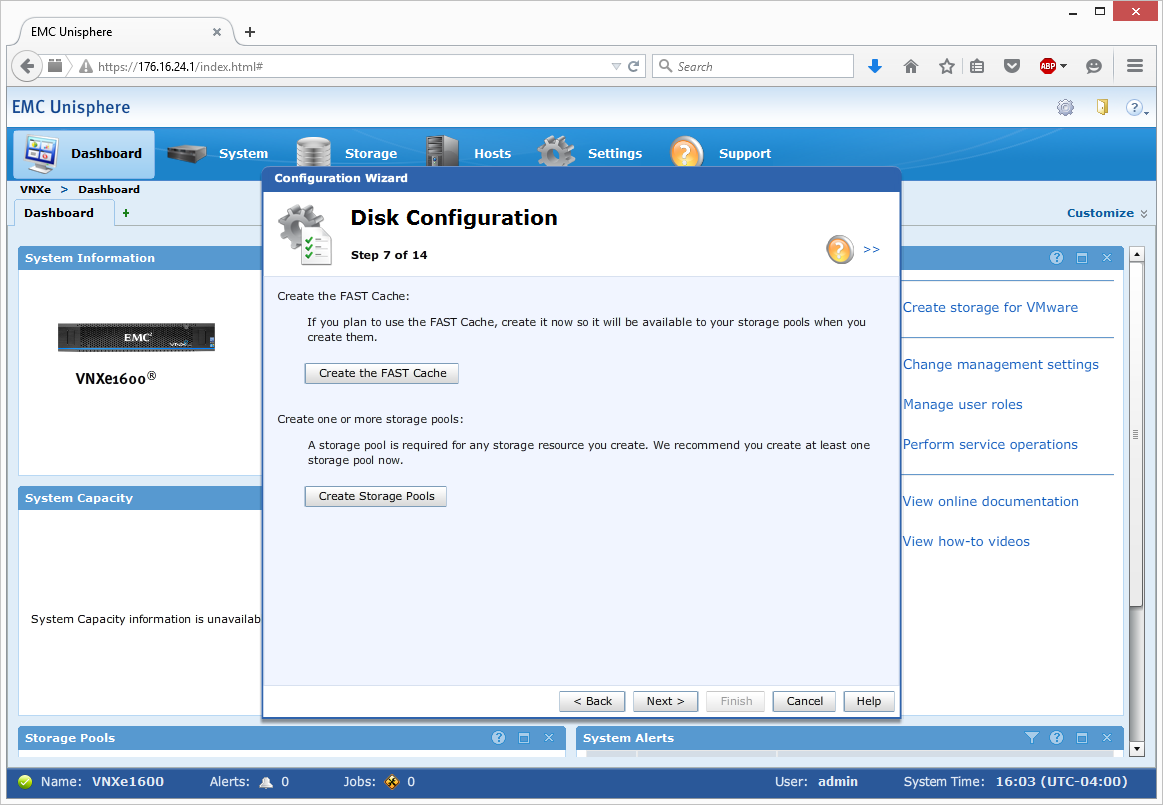 SP Cache optimizes the VNXe1600’s Storage Processor DRAM to increase host write and read performance. Instead of flushing a “dirty” cache page to disk, the page is copied to the disk but still kept in memory for near-term reuse before ultimately being removed from the cache.

Multicore FAST Cache can be considered as a secondary cache that is built from SSDs, and enhances I/O activity between the VNXe1600 DRAM-based Multicore Cache and non-Flash storage pools managed by the array. Note that the initial VNXe1600 release only supports FAST Cache configurations with a total of two cache drives: EMC intimates that future releases may not feature this limitation. 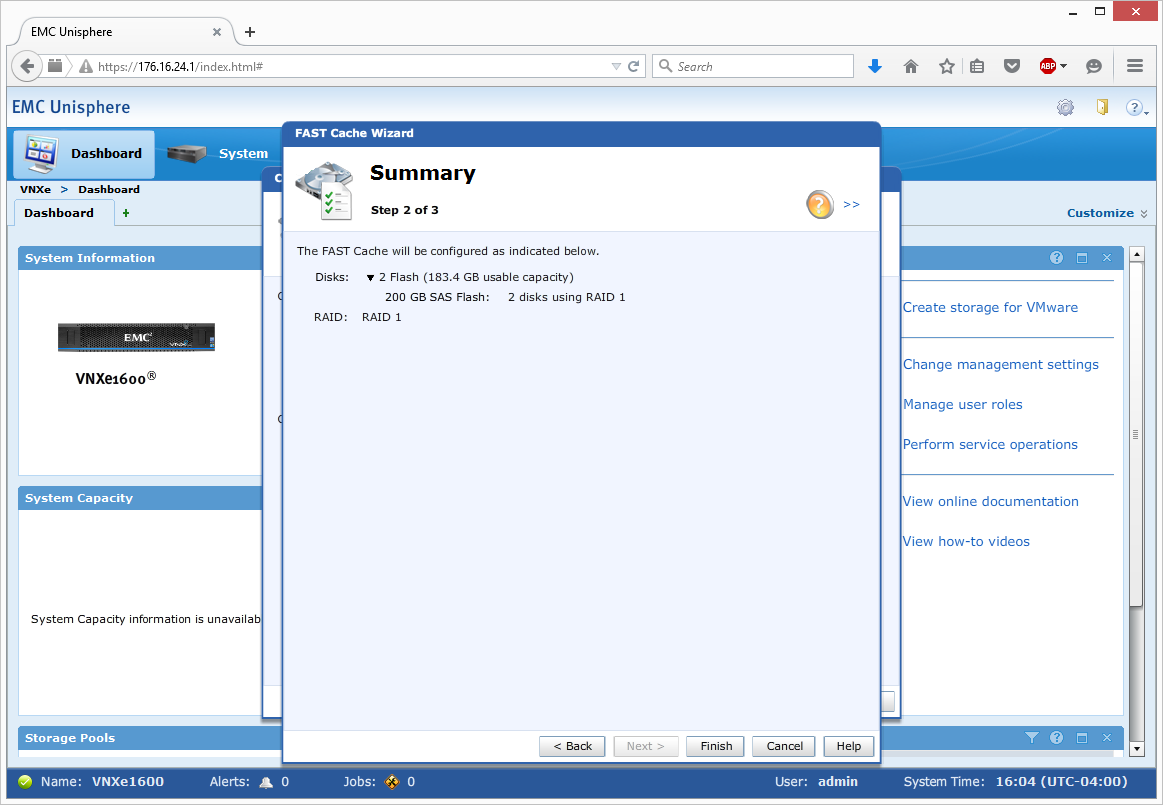 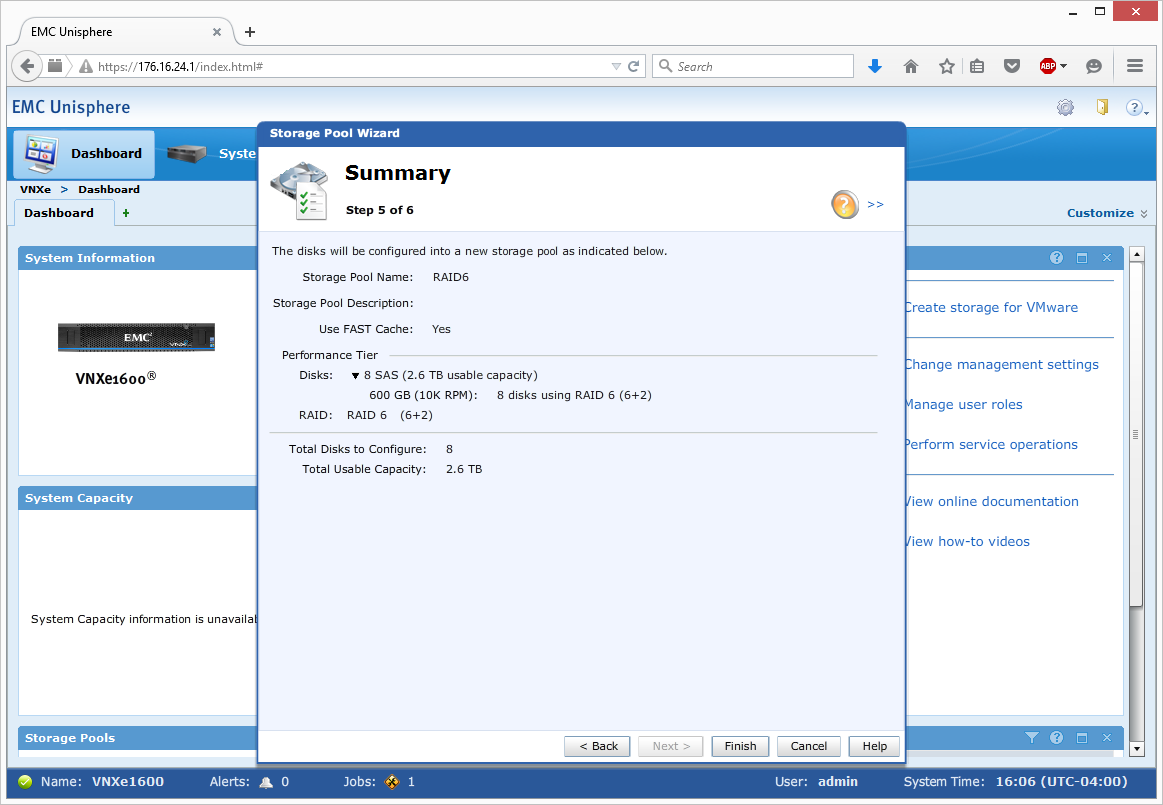 EMC’s VASA, VAAI, and VMware Aware Integration are available to integrate with VMware vCenter and ESXi hosts. These integrations include storage monitoring from VMware interfaces and the creation of datastores from Unisphere. VMware Site Recovery Manager (SRM) is available for disaster recovery.

The 100GB test size is specifically chosen to shown in-FAST Cache performance performance, whereas the 1000GB tests spill outside of the 183GB of usable FAST Cache and show what the backend storage pool is capable of.

This array was benchmarked with our Dell PowerEdge R730 Testbed:

Prior to initiating each of the fio synthetic benchmarks, our lab preconditions the device into steady-state under a heavy load of 16 threads with an outstanding queue of 16 per thread. Then the storage is tested in set intervals with multiple thread/queue depth profiles to show random performance under light and heavy usage.

With a fully-random 8K 70% read operations and 30% write synthetic workload, we look primarily at the performance advantage of in-FAST Cache vs. out-of-FAST Cache performance of the VNXe1600 in RAID6 and RAID10 over FC. The 100GB RAID6 measurement slightly edged out the 100GB RAID10 configuration, although both performed significantly higher than our 1000GB tests. Moving well outside of FAST Cache, RAID10 offered more throughput than RAID6, which isn’t entirely surprising. 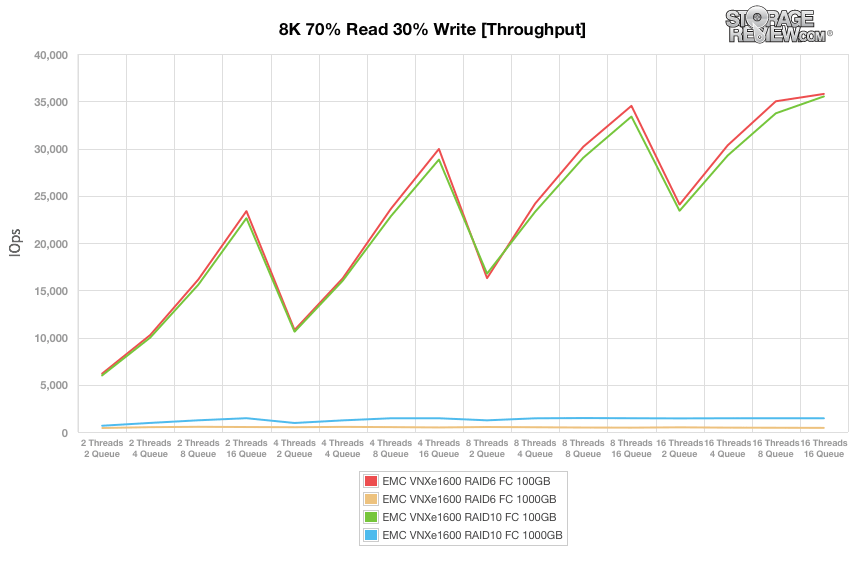 Average latency results for the 8k 70/30 benchmarks also show the 1000GB RAID6 pool’s performance at the bottom of the pack, compared to in FAST Cache 100GB RAID6 and RAID10 measurements with the lowest response times. 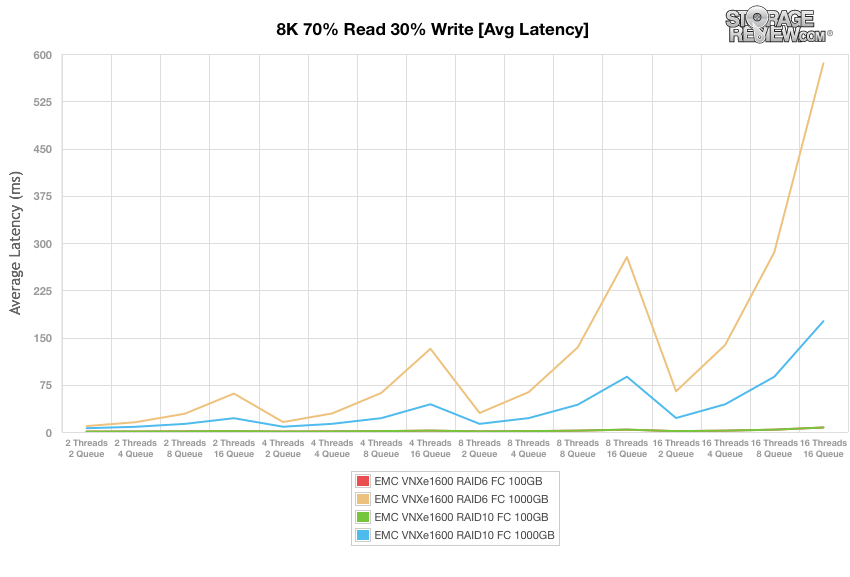 Maximum latencies recorded during the 8k 70/30 benchmark also reflect the struggles of the 1000GB RAID6 with deep queues. Maximum latencies for the other configurations were more mixed, with the VNXe1600 100GB RAID10 having the best results overall. 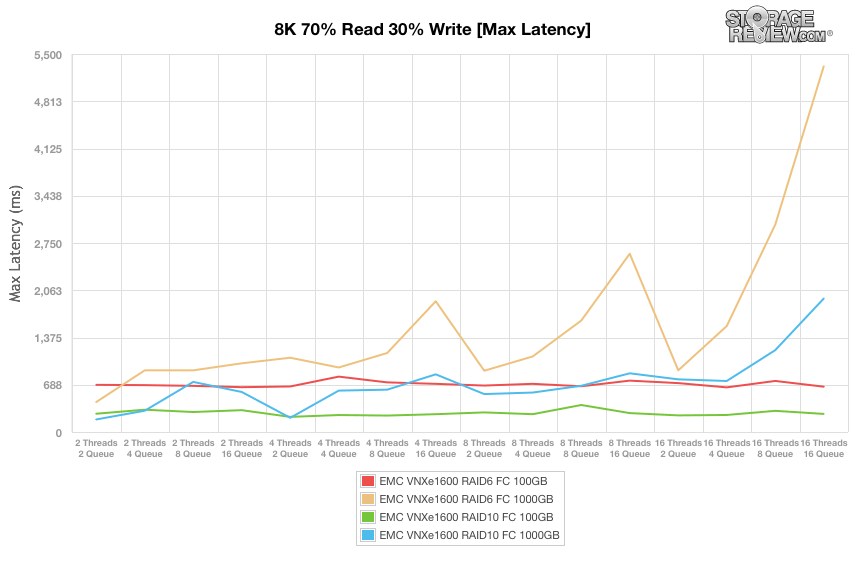 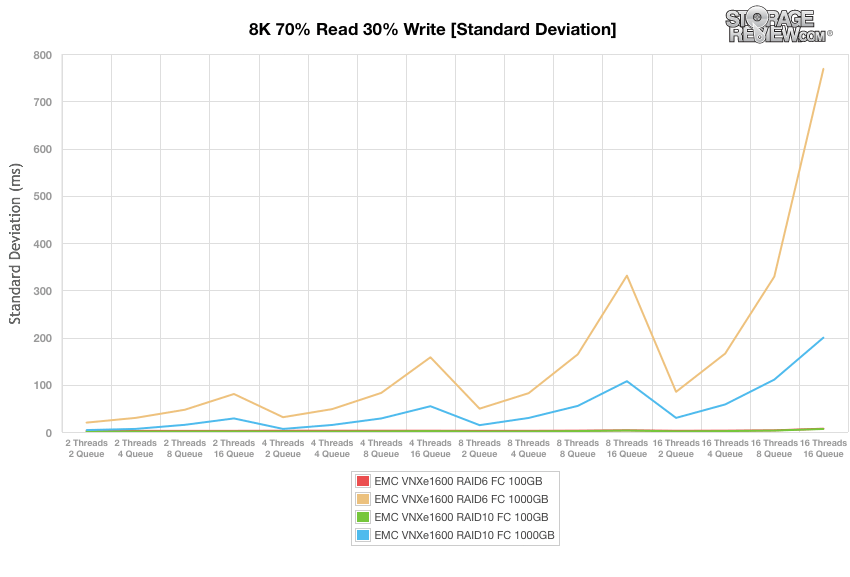 The EMC VNXe1600 continues to advance VNX product family into the sub-$10k SMB market with a true enterprise-grade feature set and price tag that will make it appealing for hub and spoke deployments, offsite replication, and other applications for SMB. Larger organizations that may already have VNX infrastructure would find the VNXe1600 useful for internal departments and remote offices. With its low starting price, EMC is looking to strike fear in the hearts of most entry-enterprise competitors that have generally felt safe and comfortable in this price band. Generally speaking, features such as dual active-active controllers, 8/16Gb FC connectivity, replication support are only seem in more upstream systems. Going as far as including onboard battery backup that can flush system DRAM to flash in the event of power failures almost seems like overkill for what many customers might shop in this range, but this is the difference a vendor such as EMC brings to the table compared to a tier-2 or tier-3 vendor that has generally only competed on price or a BYOD (Bring You Own Drives) model.

In terms of performance the EMC VNXe1600 offers quite a punch, although more so with workloads capable of sitting inside its optional 200GB FastCache. We saw strong fully-random results, with 4K measuring upwards of 55k IOPS read and 30k IOPS write depending on backend storage pool configuration. 8k 70/30 performance peaked at over 35k IOPS, showing the dual-core CPU controllers still offered plenty of punch compared to the quad-core CPUs found in the VNXe3200. Sequential performance was also strong, measuring over 3GB/s read and 1.8GB/s write over 16Gb FC.

There are hybrid arrays on the market that reach lower price points than the VNXe1600, but the VNXe is distinguished by its access to VNX2 functionality and interoperability which smaller customers may have felt priced out of in the past. The VNXe is one of the smaller segments of the EMC business, but in terms of what’s being accomplished in their respective price bands, the VNXe1600 and VNXe3200 are extraordinary machines. Factoring in feature set, caching performance, and support infrastructure, the VNXe1600 is a clear leader when looking at arrays that start out sub $10k. Quite frankly, the VNXe1600 is so well executed that it’s difficult to make the case for other options in this category.

EMC makes only a few compromises to bring the power and support of EMC’s VNX2 family to a new market at an unprecedented price point in the integrated 2U form factor of the VNXe1600.