Gigabyte has recently added to their server line-up with the R282-3C0 (rev. 100) – 2U Gen4 NVMe system. This server features dual 3rd Generation Intel® Xeon® Scalable CPUs that launched back in April. The R282-3C0 is intended for high-density storage that supports up to eight 3.5-inch SATA drives, and four 3.5-inch NVMe drives, giving a total of 12 hot-swappable bays.

Gigabyte has recently added to their server line-up with the R282-3C0 (rev. 100) – 2U Gen4 NVMe system. This server features dual 3rd Generation Intel® Xeon® Scalable CPUs that launched back in April. The R282-3C0 is intended for high-density storage that supports up to eight 3.5-inch SATA drives, and four 3.5-inch NVMe drives, giving a total of 12 hot-swappable bays. 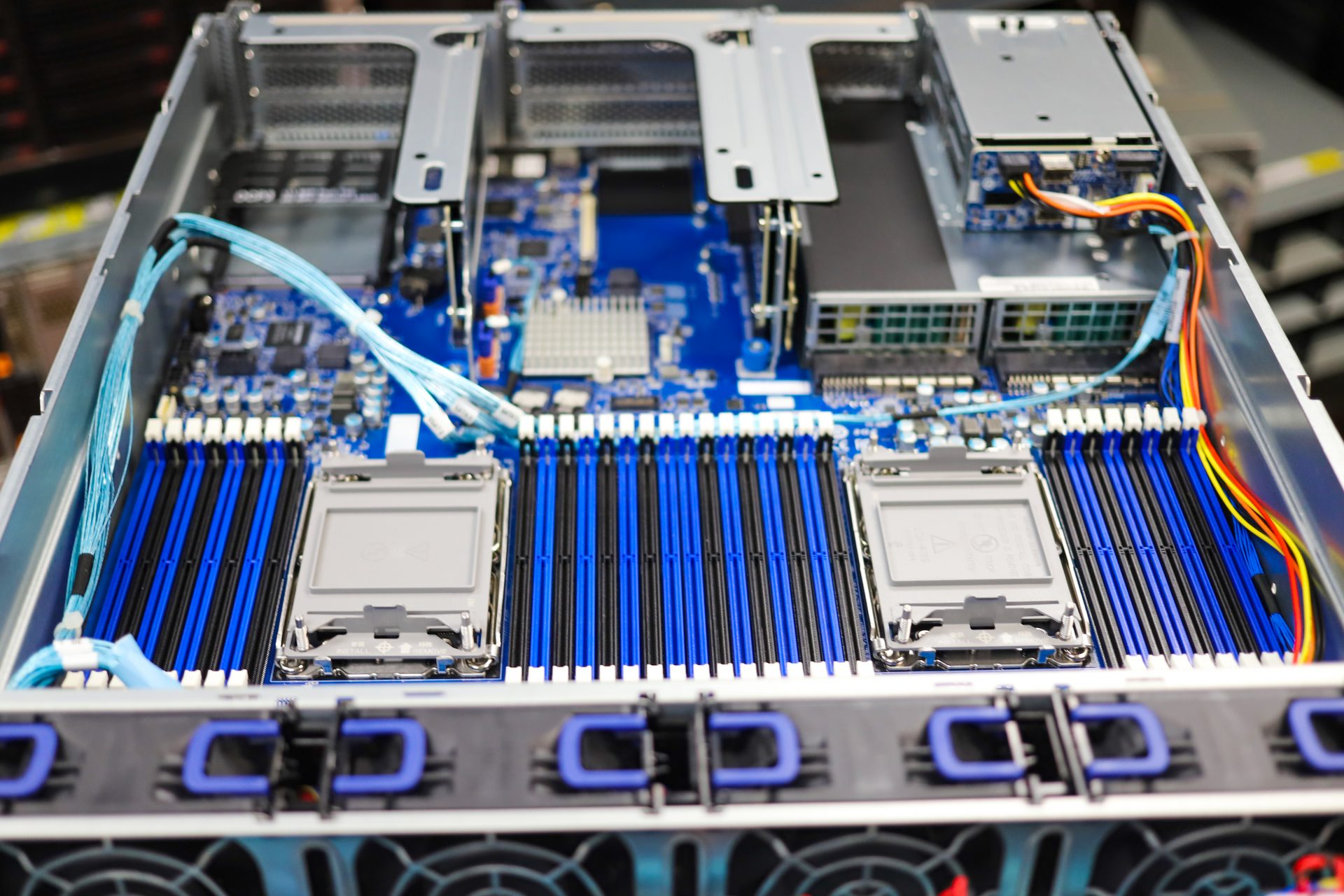 The specific model that we are reviewing is the R282-3C0. This model isn’t the highest end of the R282 series, however, the internals still offers good performance potential and flexibility. 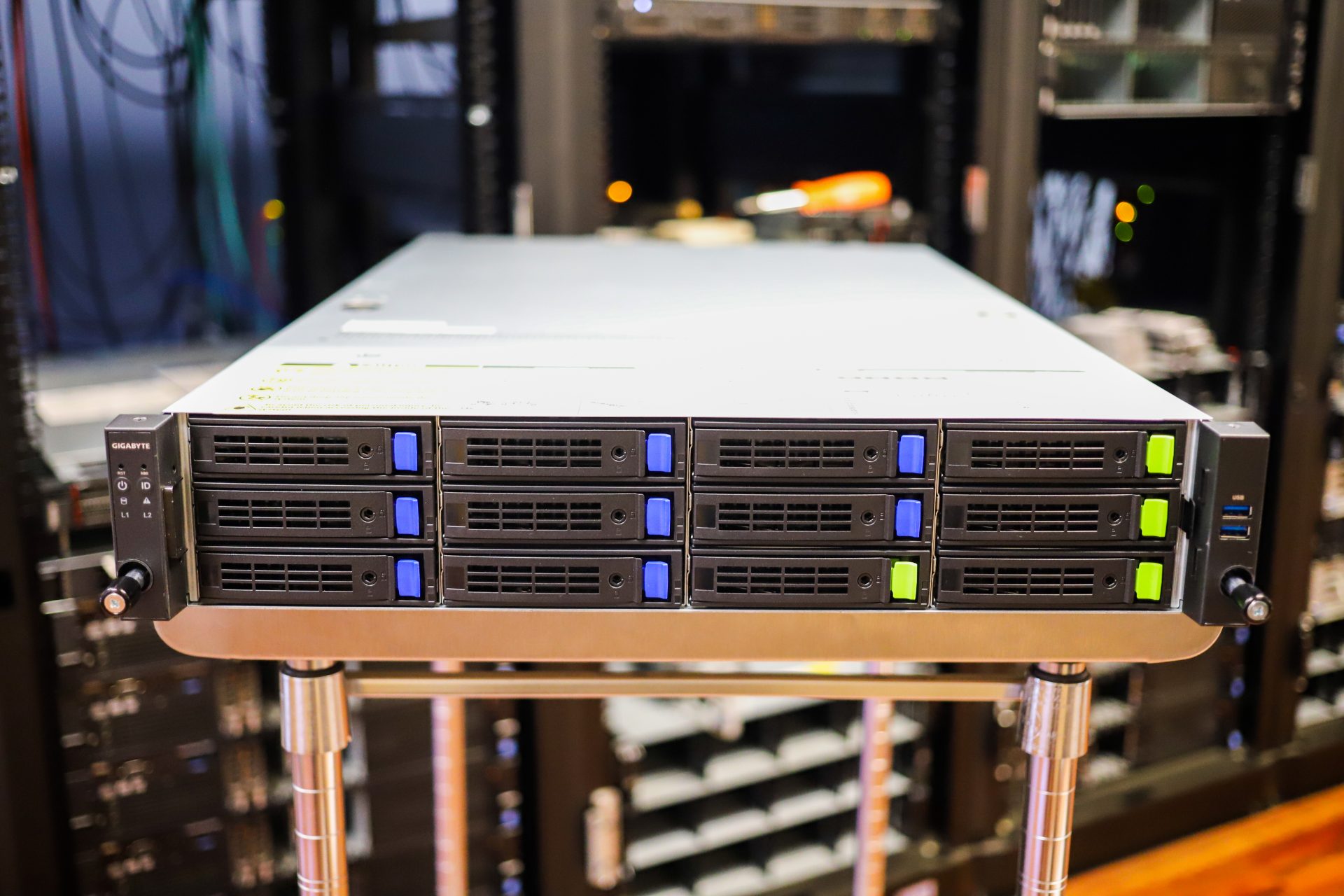 In terms of the motherboard, on the model that we have, the MR92-FS0, which comes with 2 sockets for the dual CPU set that is onboard, 32 DIMM slots with DDR4 support, 8 PCIe slots with varying lengths. The most interesting thing to note about the model that we have is that there isn’t an M.2 slot. Most other servers have an M.2 slot, which would be used to boot, however, we don’t have one. This may be an inconvenience, non-issue, or deal-breaker, but something the buyer must think about. 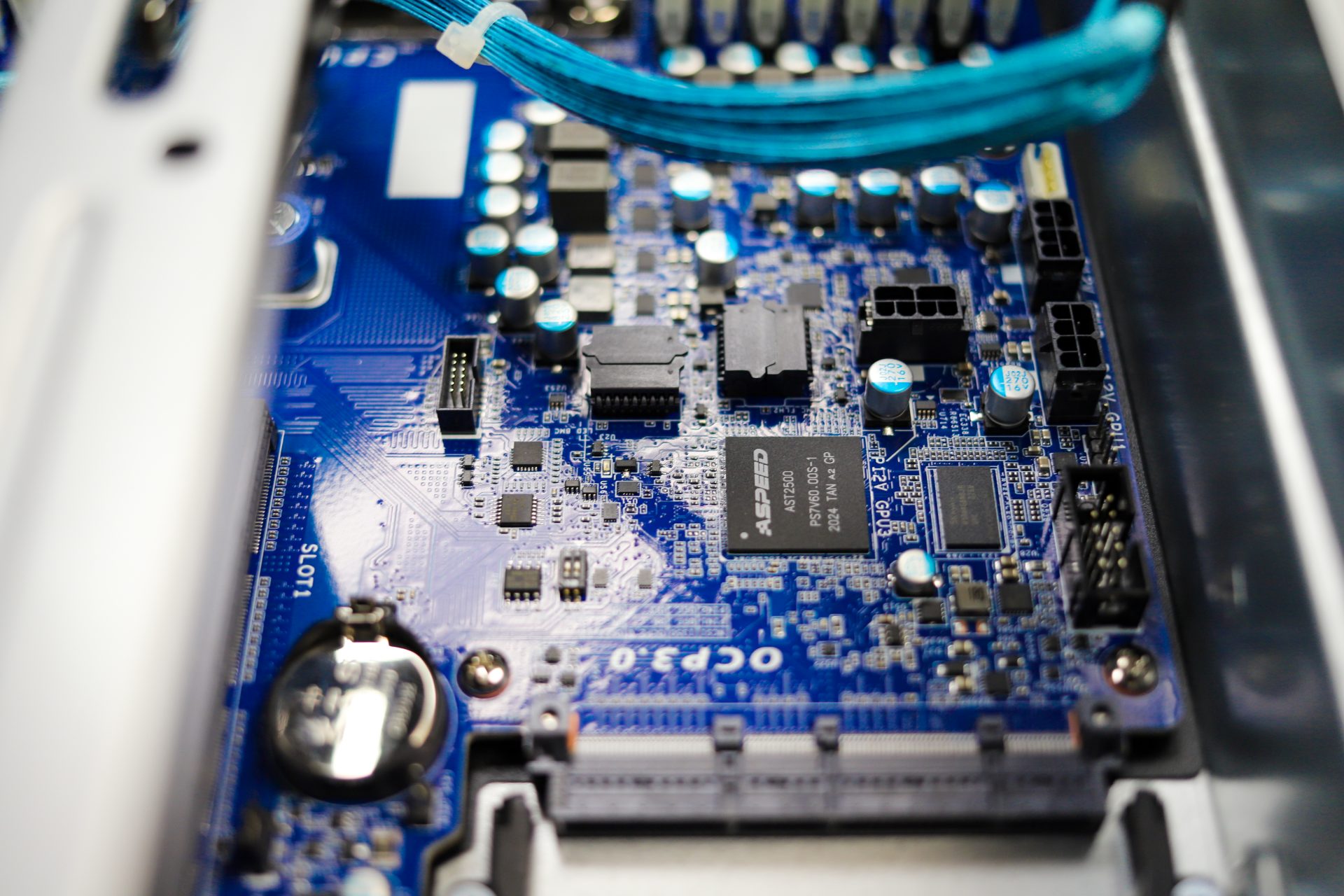 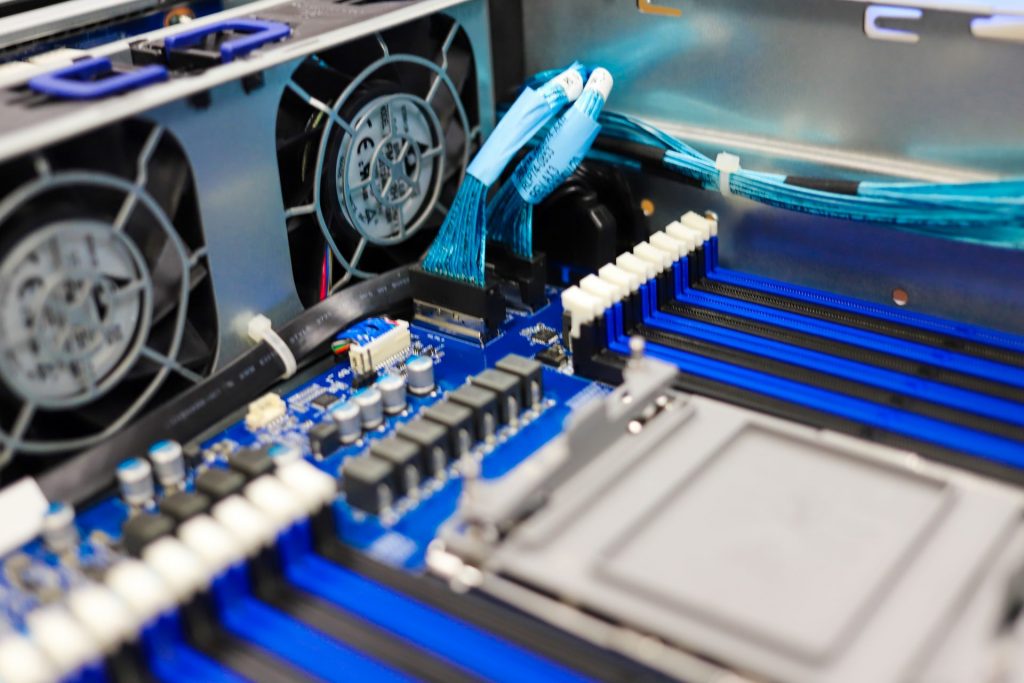 On the rear of the server, there 2 USB 3.0 ports, a VGA port, 2 RJ45 ports, an MLAN port, an ID button with LED, and 2 power connector ports for the dual power supplies that are within the server 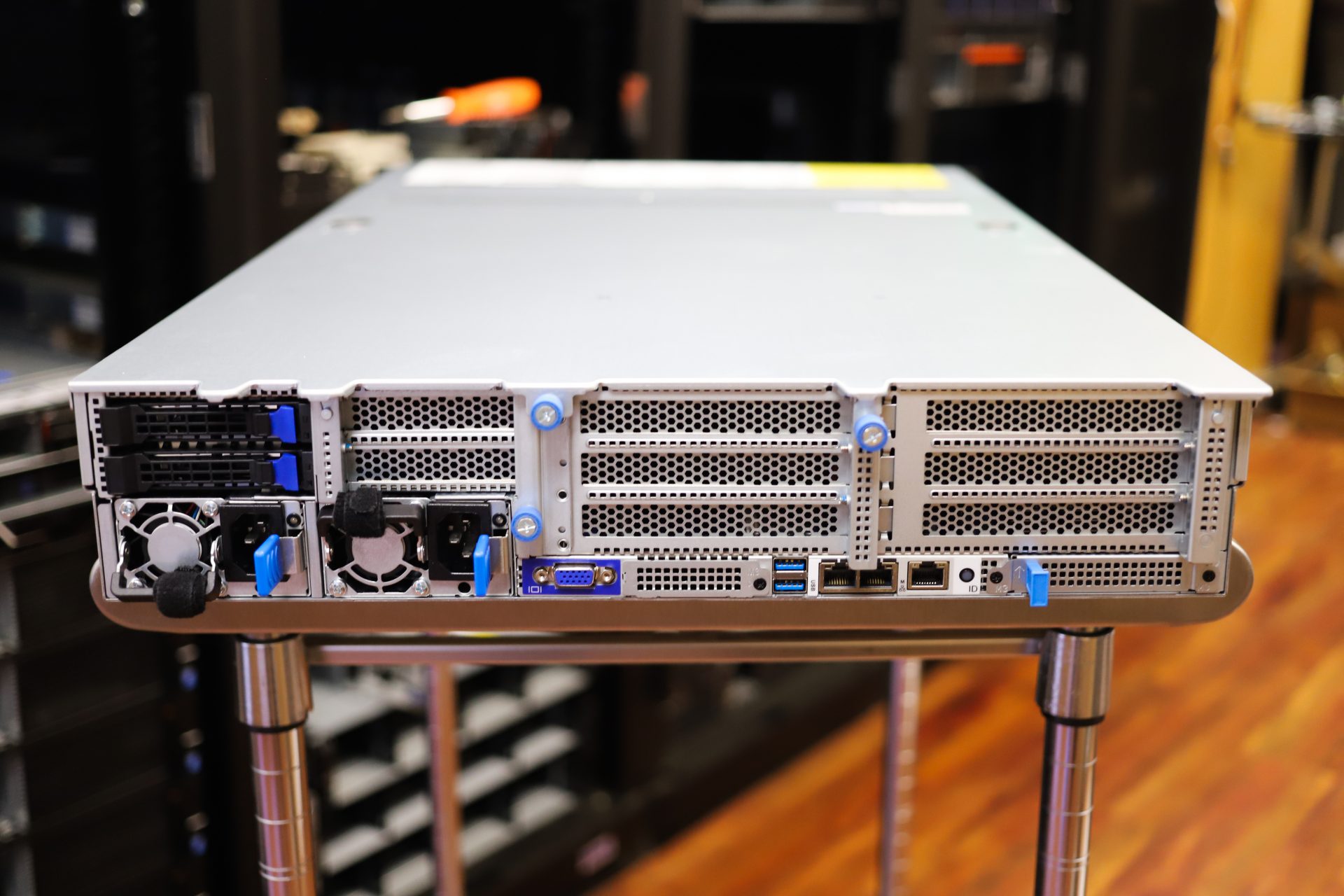 The Gigabyte R282-3C0 utilizes a MegaRAC SP-X BMC for out-of-band management. This management platform allows users to handle basic tasks such as remotely controlling the power to the server, flashing the BIOS and launching a KVM for installing software on the server. 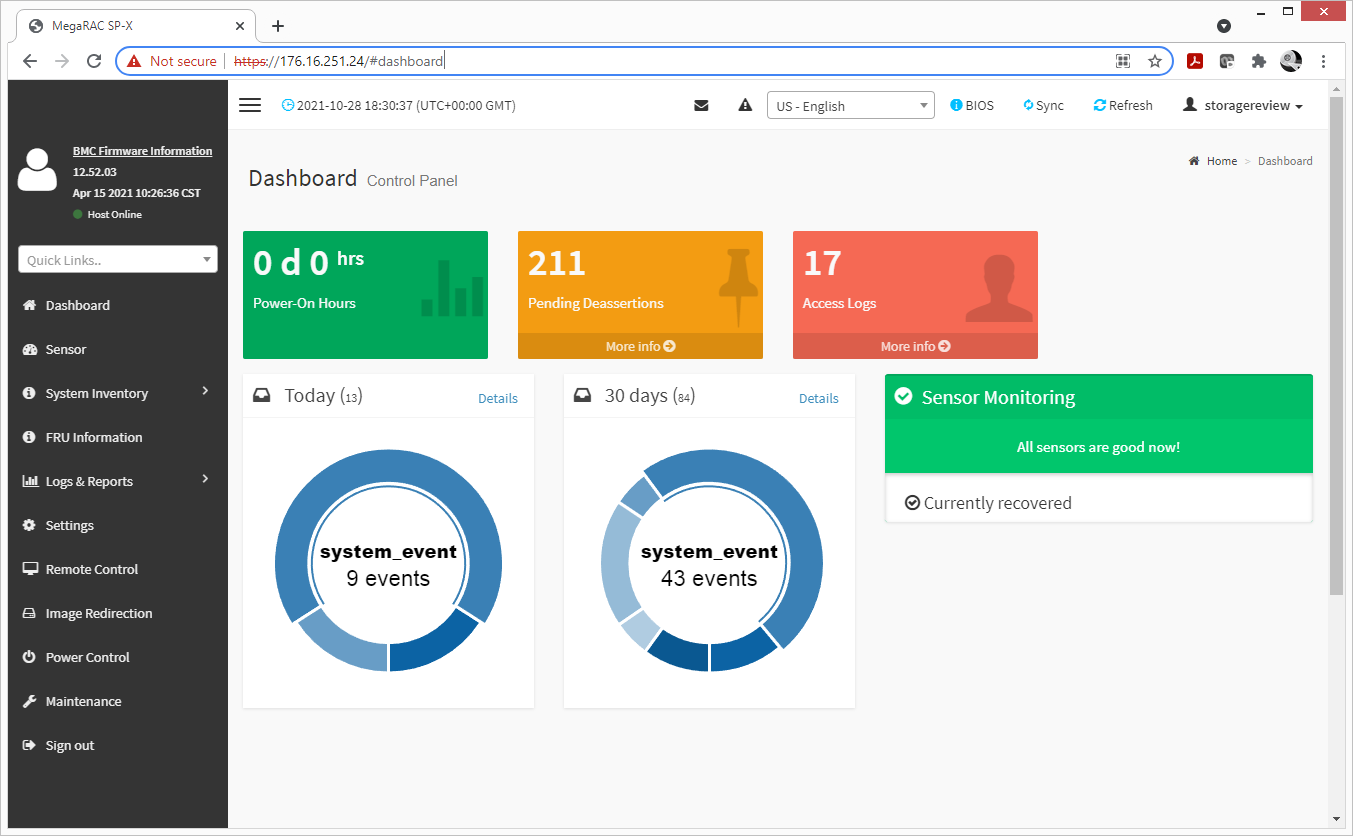 The interface is a bit clunky compared to what you might find on a Tier1 server from Dell EMC, HPE, Cisco, etc, but it gets the job done for managing the system remotely. Users are also given HTML5 and Java KVM options depending on which they prefer to use. The only negative we ran into with the KVM specifically is mounted ISOs were limited to just over 1Mb/s of transfer speed, making even smaller footprint OS installs take quite a long time. The compromise we found was flashing a USB thumb drive with the OS installer and using the KVM to remotely install it. 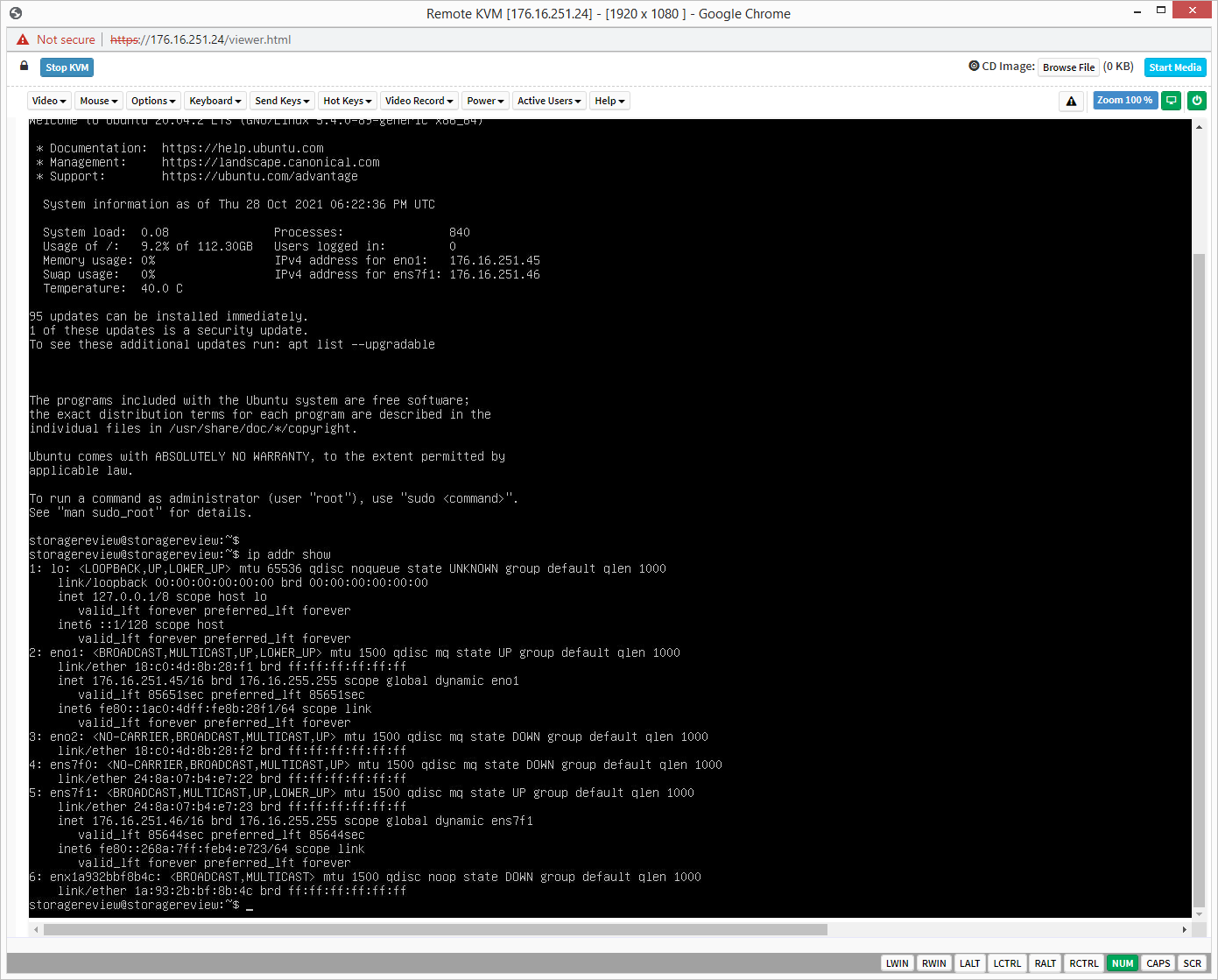 For SQL Server average latency, the Gigabyte R282-3C0 maintained a 1ms latency throughout with 8VM. 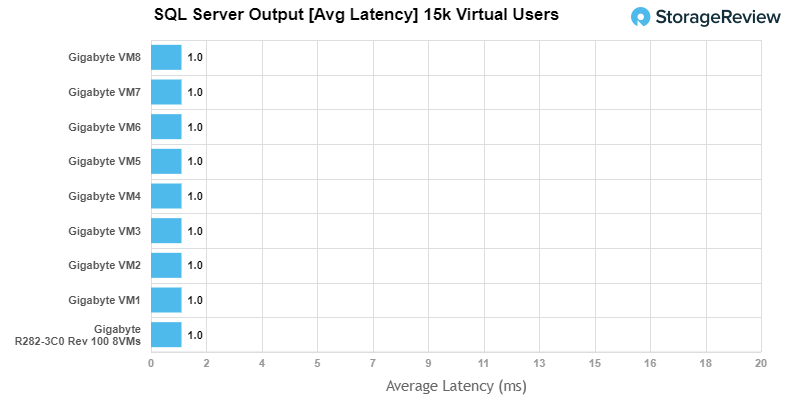 With the Sysbench OLTP, we recorded an aggregate score of 25,537 TPS for the 8VMs with individual VMs ranging from 3,187 to 3,199 TPS.  The average and ranges weren’t a shock to us, as in the past, we have seen similar servers perform about the same.

In our worst-case scenario, 99th percentile, the latency on the 8VM hit an aggregate time of 19.13ms with individual times ranging from 19.07ms to 19.17ms.

4K random write had a really good start with the latency being well under 100µs at 35µs and staying there until the server reached a little over 1.6 million IOPS.  The peak then happens at 1,823,423 IOPS, with a latency of 909µs.

For the VDI FC Monday Login, the server had a steady rise until it peaked at 347,985 IOPS with a latency of 165µs.

The Gigabyte R282-3C0 is a 2U, dual-processor server that takes the performance of the 3rd Gen Xeon Scalable processors and puts them to the test. Along with the 12 hot-swappable 3.5″ bays on the front, four of which are able to support NVMe, this server is able to hold a mix of storage. For organizations that need accelerated capacity, it’s interesting to mix some flash for tiering, with low-cost HDDs for storage. Then you have the twin SATA drives in the back that can be used for boot. This is useful as there’s no M.2 storage onboard. 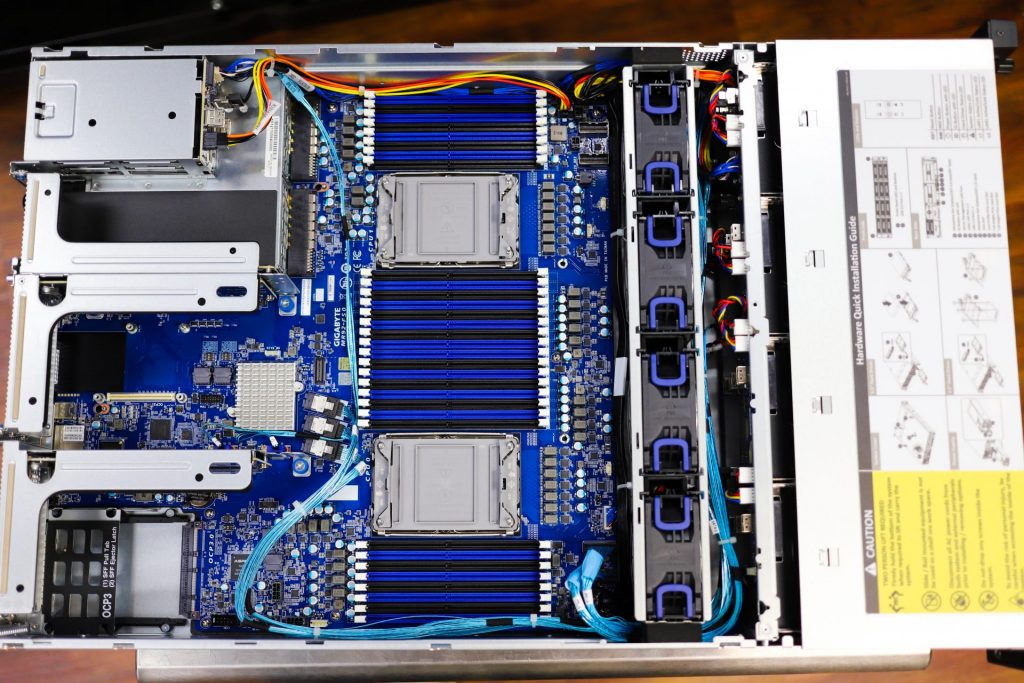 The various tests that we ran on the server came out to be what we had already expected. The limitation of four NVMe bays held back the peak storage potential since most of the bays are leveraged for higher-capacity spinning media. The drive configuration though is targeted, most customers would put midrange CPUs in a system like this and target a more balanced price point. Of course, something else in the Gigabyte lineup would have more performance with a full slate of NVMe. They have the R282-Z92 for instance that can pair up 24 NVMe SSDs with GRAID for incredible performance.

Realistically, this server is going to be used for high-density storage, with a possibility of acceleration via NVMe flash. The only thing that is holding this server back is more NVMe storage, but this build puts a focus on the capacity-per-dollar advantages HDDs offer. The Gigabyte R282-3C0 is a good choice for use cases that want a mix of capacity and NVMe in a 12-bay (or 14 depending on how you count) design built around the Intel Scaleable Gen3 architecture.