The TEAMGROUP CARDEA Z44Q PCIe 4.0 SSD is the company’s newest NVMe SSD to hit the market. It features 3D QLC NAND, the NVMe Gen4 interface, and comes in capacities ranging from 2TB to 4TB. These new drives are meant for general consumers and professionals looking for a high-capacity SSD and a bit more speed than a Gen3 QLC for their mainstream workloads.

The TEAMGROUP CARDEA Z44Q PCIe 4.0 SSD is the company’s newest NVMe SSD to hit the market. It features 3D QLC NAND, the NVMe Gen4 interface, and comes in capacities ranging from 2TB to 4TB. These new drives are meant for general consumers and professionals looking for a high-capacity SSD and a bit more speed than a Gen3 QLC for their mainstream workloads. 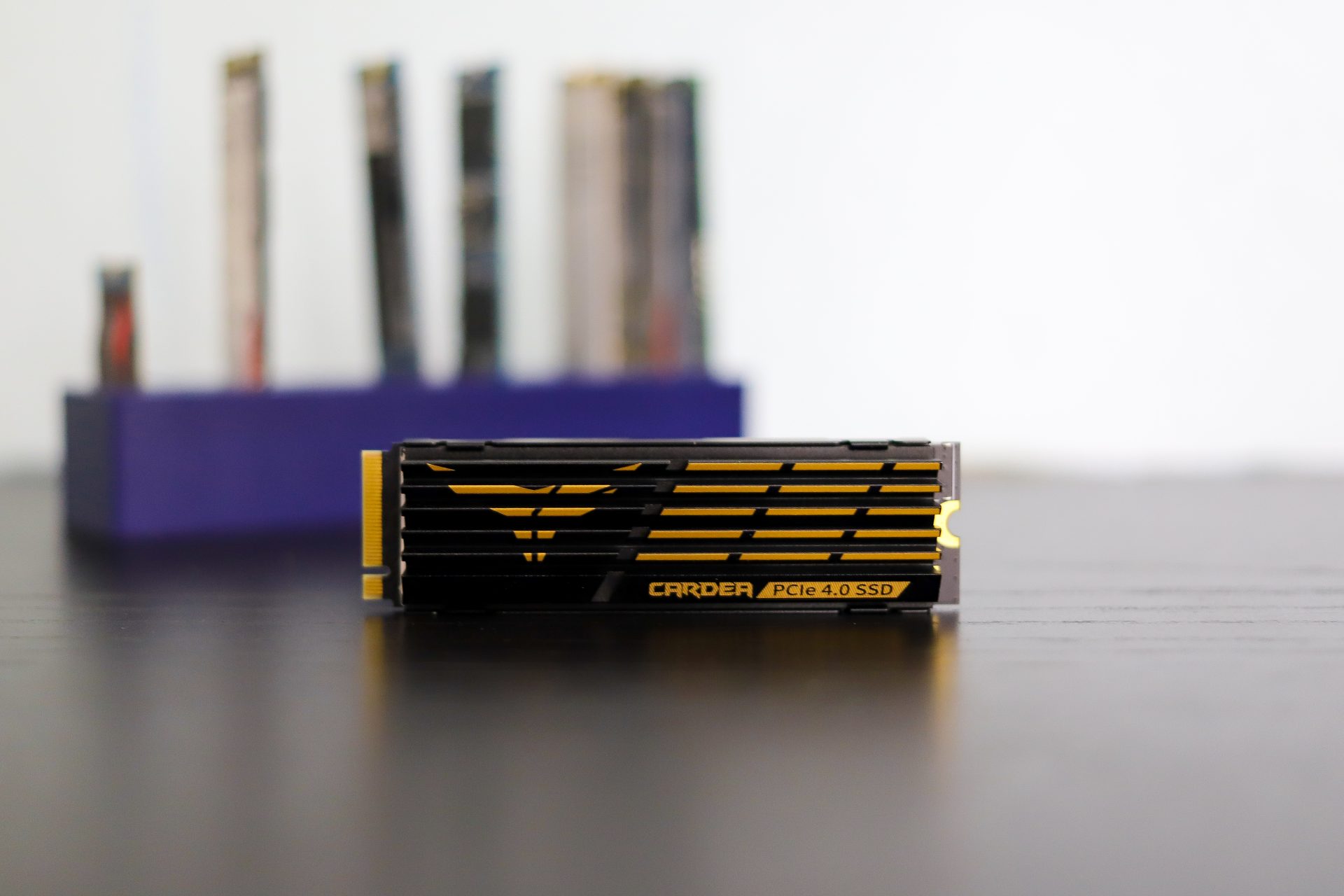 Two types of heat spreaders for heat dissipation are shipped with the drive. If your system is space-constrained, the ultra-thin Graphene heat sink will reduce overall heat up to 9%. There is also the aluminum fin type heat spreader for desktop installations offering up to 15% heat reduction. Most boards won’t allow for the larger spreader, but it is visually appealing, even if overkill for a QLC SSD. 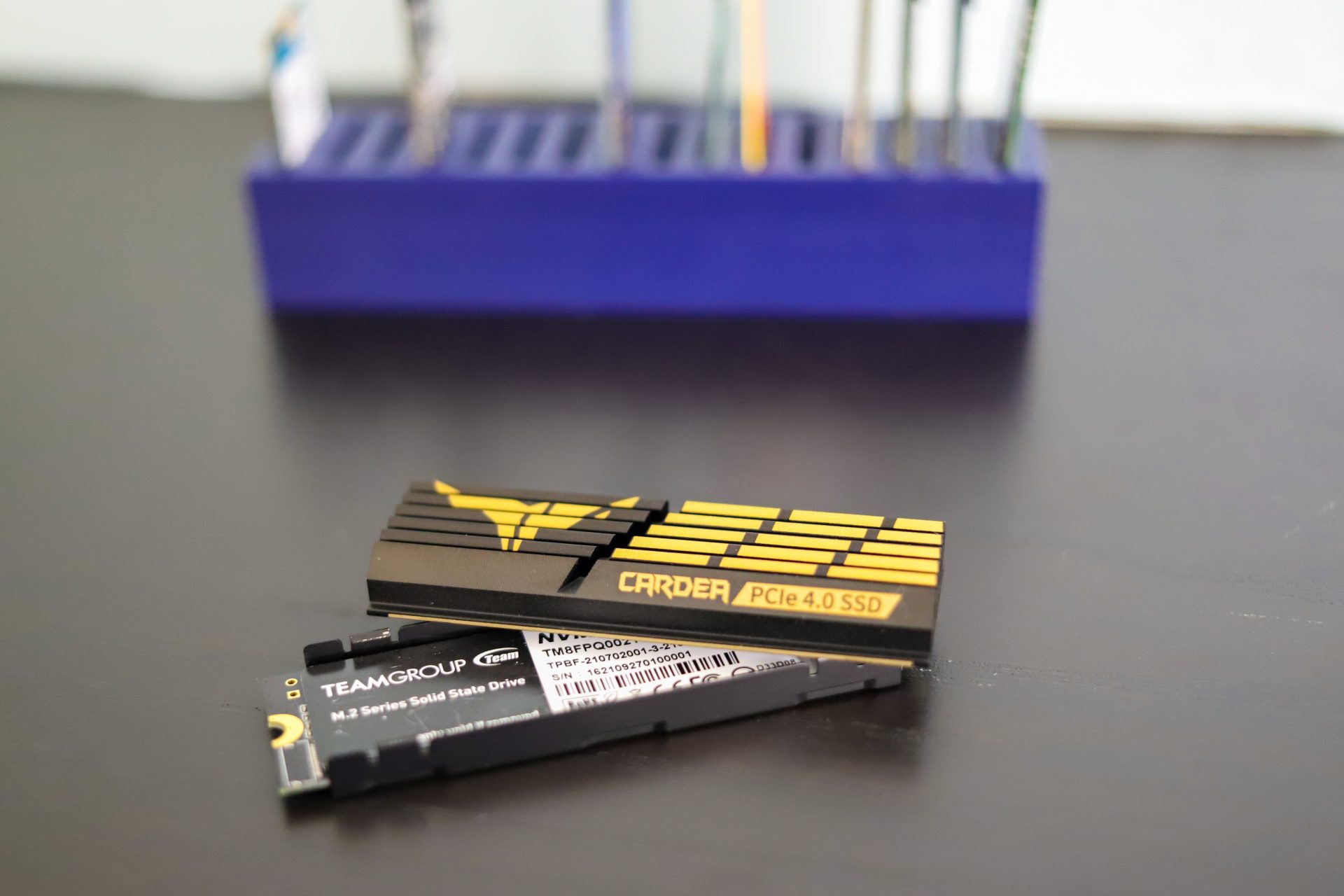 As is the case with the Z44Q, QLC drives most often feature higher-capacity models at a lower price point. However, this comes at a cost, as these types of SSDs usually have a very small continuous write capability and are therefore unable to reach the same performance level as TLC-based SSDs. To help offset some of this, the Z44Q features dua- cache technologies: SLC Caching and DRAM Cache Buffer. 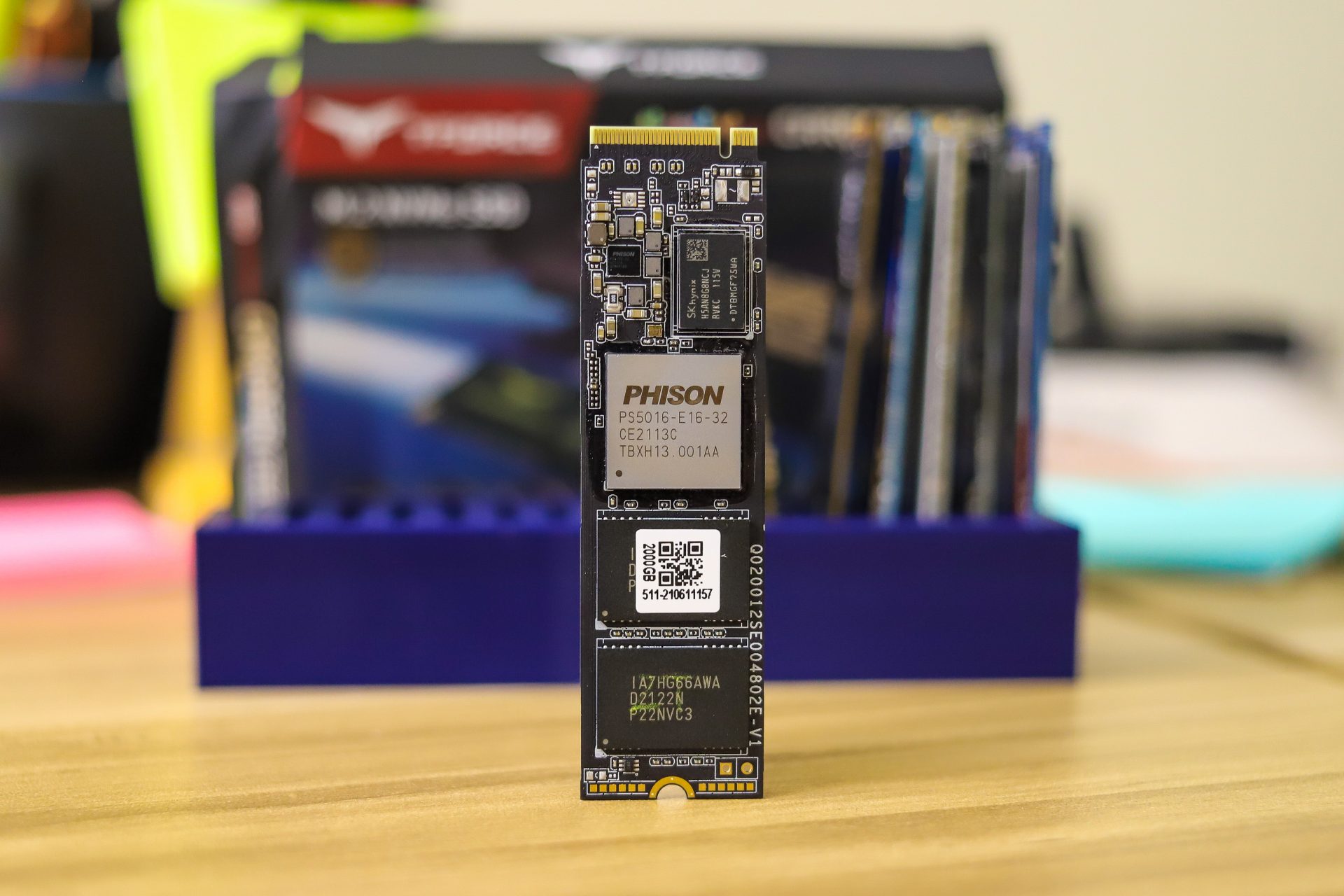 The tool also has a benchmarking feature for those who want to gauge the drive’s 4K and sequential performance. For these tests, you can also customize the test plan, loop number, specific drive, file size, and benchmark type. 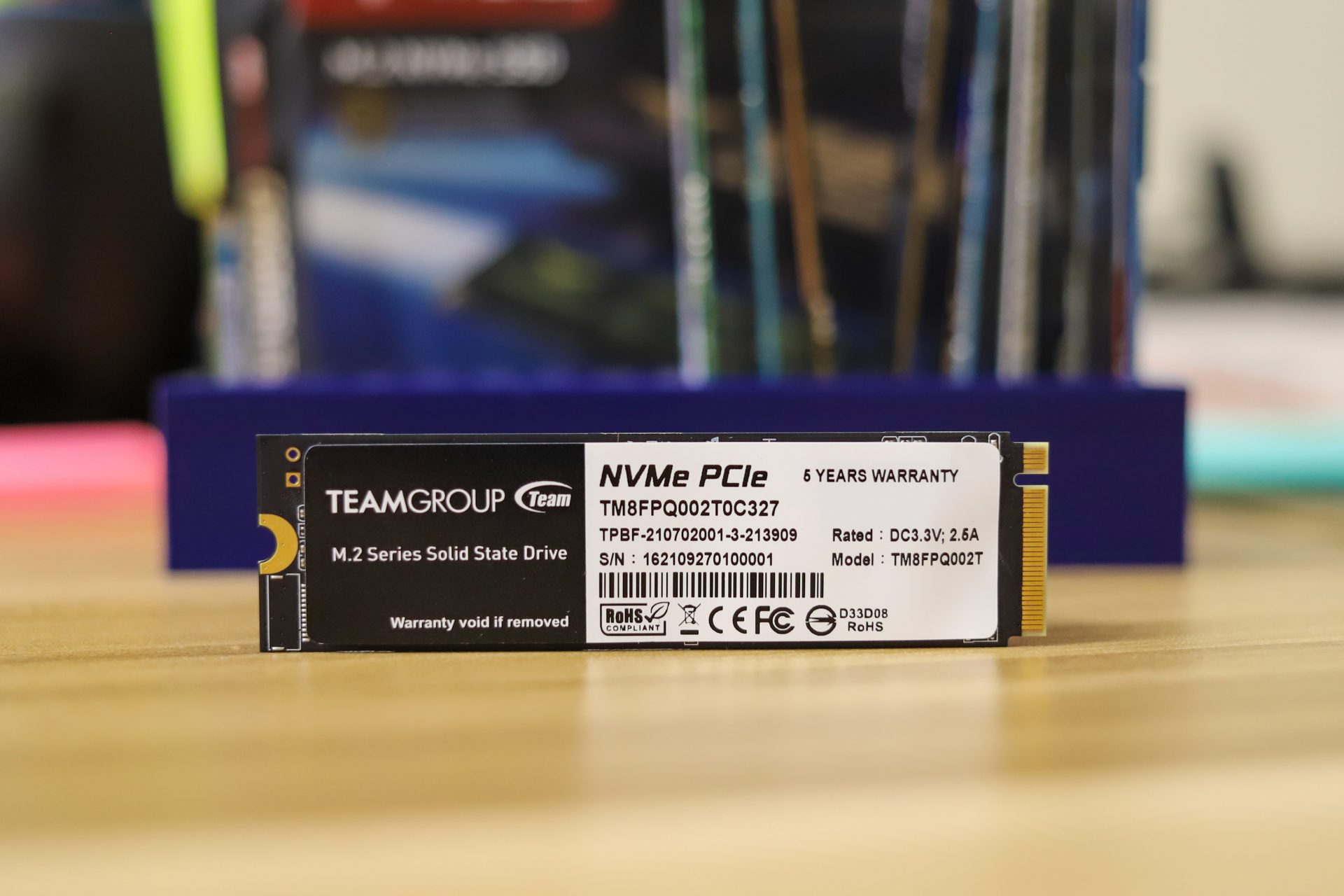 Backed by a 5-year warranty, the TEAMGROUP Z44Q goes for roughly $250 (2TB). We will be looking at the 2TB model for this review. 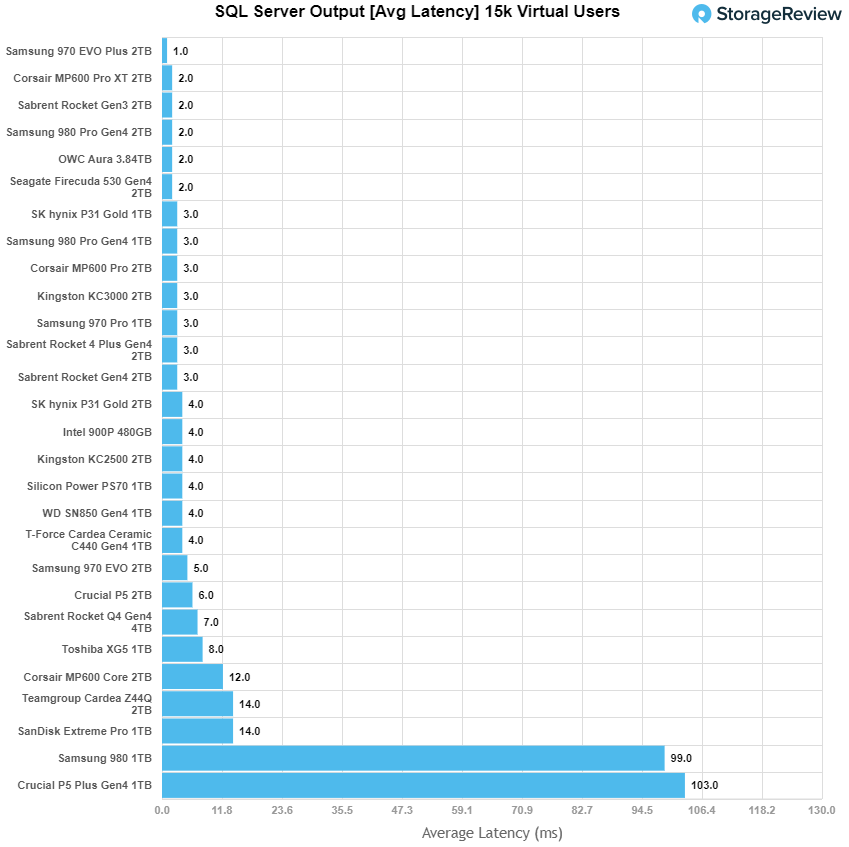 In 4K random read, the TEAMGROUP CARDEA Z44Q started things off with solid consistent performance of 10,789 IOPS and a latency of 78.2µs. Following a brief spike in latency toward the end of this test, peak performance of 129K IOPS and a latency of 91.5µs. These results fell in the same range of similar devices in this class. The Corsair MP600 Core 2TB leveraging the same controller came out with an identical low saturation point. This is one area that when we first reviewed the MP600 Core 2TB we had to re-order tests to see higher 4K performance. We’ve since revised its performance down, to what we found when matching the order of tests to the other comparables we tested.

Switching to sequential workloads, we look at our 64K tests. In read, the Z44Q Plus fell back to tie for second place with a throughput of 53K IOPS or 3.28GB/s with a latency of 609µs.

Next, we looked at our VDI benchmarks, which are designed to tax the drives even further. These tests include Boot, Initial Login, and Monday Login. Starting with Boot, the TEAMGROUP Z44Q had a peak of 79,676 IOPS with a latency of 431.1µs before it dropped off a bit at the very end of the test. Results were consistent with other drives in the test group.

In VDI Initial Login, the Z44Q peaked at second compared to all drives and as they jumped all over. The core hit 29,277 IOPS and with a latency of 999.7µs before having fairly noticeable spikes in performance.

Finally, VDI Monday Login saw the Z44Q peak at 38,022 IOPS with a latency of 417µs before showing a slight dip at the very end. 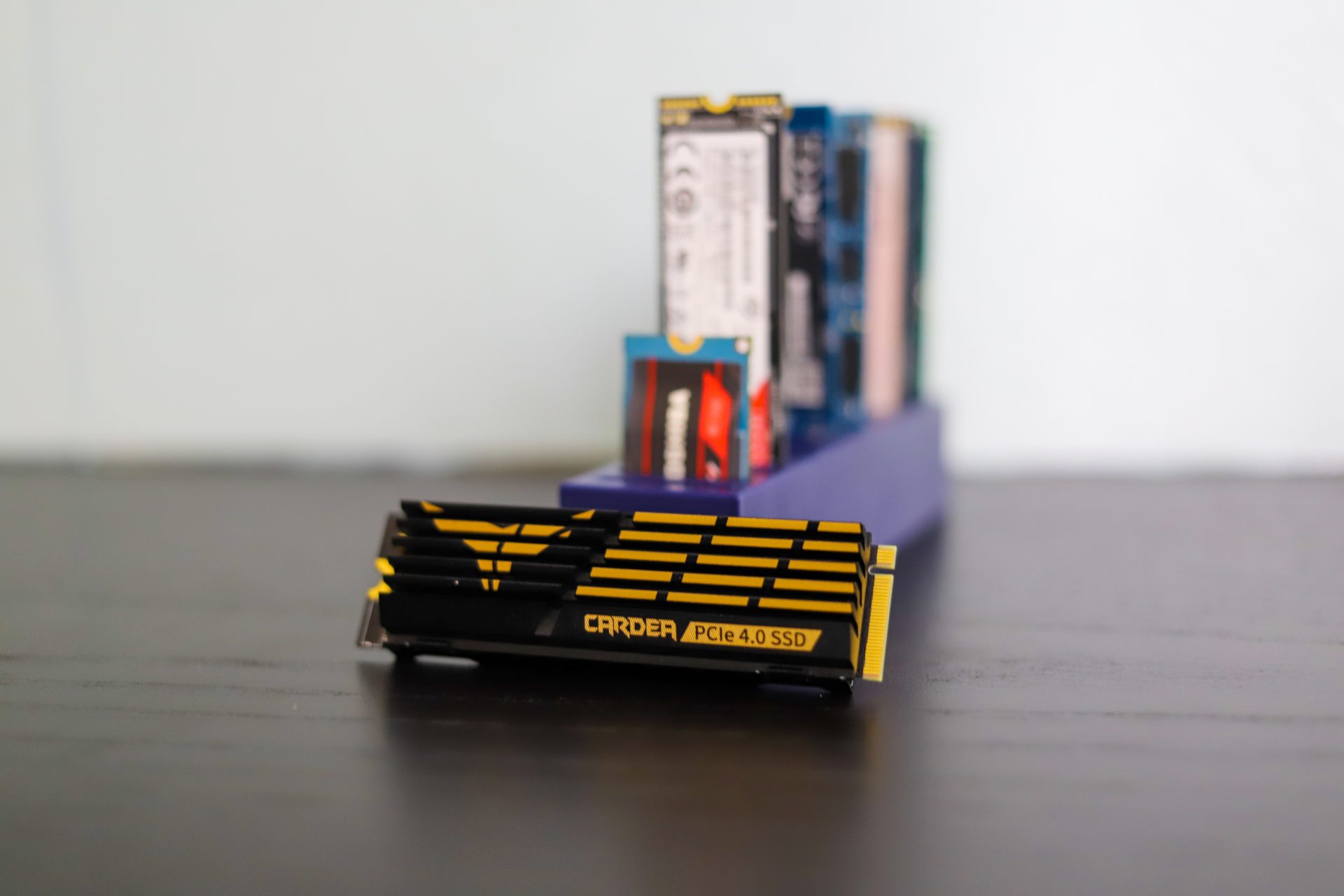 For performance, we ran SQL and VDBench tests. The Z44Q showed mainly solid results, placing at the near the middle to the top end of the leaderboard in most tests when compared to other drives of its class. In average latency, the new TEAMGROUP drive posted 14ms, which placed it near the bottom of the pack.

Overall, the Z44Q is a solid release by TEAMGROUP.  The Z44Q doesn’t offer the same performance as more premium TLC drives, but that’s not what it’s trying to do. For the price-conscious, it still offers good transfer rates for its class (especially in writes) at a competitive price point for the lower capacity models.