Hi, my name is Alex and this a look into my homelab. I have always been passionate about tech, but my interest in IT started about 13 years ago. My first home lab setup consisted of just a Dell Dimension E521 desktop. Back then, the OS to play with was Windows Server 2003. This setup allowed me to pass some Microsoft certifications and land my first helpdesk job. With some on-the-job experience, I was able to obtain the MCSE 2003 certification and that same computer was later on repurposed to become a Media Center PC. HDDs were added and my media catalog started growing. Funny enough this machine still powers on with no issues, but it is not currently in production.

Hi, my name is Alex and this is a look into my homelab. I have always been passionate about tech, but my interest in IT started about 13 years ago. My first home lab setup consisted of just a Dell Dimension E521 desktop. Back then, the OS to play with was Windows Server 2003. This setup allowed me to pass some Microsoft certifications and land my first helpdesk job. With some on-the-job experience, I was able to obtain the MCSE 2003 certification and that same computer was later on repurposed to become a Media Center PC. HDDs were added and my media catalog started growing. Funny enough this machine still powers on with no issues, but it is not currently in production. 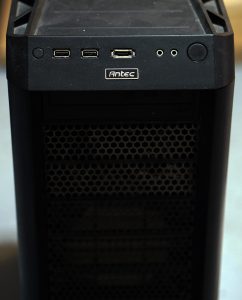 A few years later, I built my first PC just to act as a dedicated Media Center server. My wife named it the Terminator. It contains six HDDs with 1 TB capacity each. It is currently powered down, but I do start it from time to time to back up some files. It looks like it needs a shower.

At work, things started to change with networking-related incidents and requests increasing in volume. These changes played a big role in forcing me to learn some networking fundamentals and go after the Cisco CCNA certification. For the CCNA, I actually took a class, but for the CCNA Security and CCNP certifications, I went solo and built my own lab. It was a mix of six routers, four switches, an ASA 5505, a terminal server, and some other miscellaneous items. This equipment was acquired over the course of a year or so. With such a lab, I was able to learn many topics. It was not cheap, but it did translate to promotions and better pay. During that time tools like GNS3 were becoming more popular. These programs allowed you to simulate network equipment and build complex topologies using only a semi-powerful computer. The benefits over real hardware were many, but most importantly cost, space, and ease of setup. I sold this lab and started scoping more competent servers. 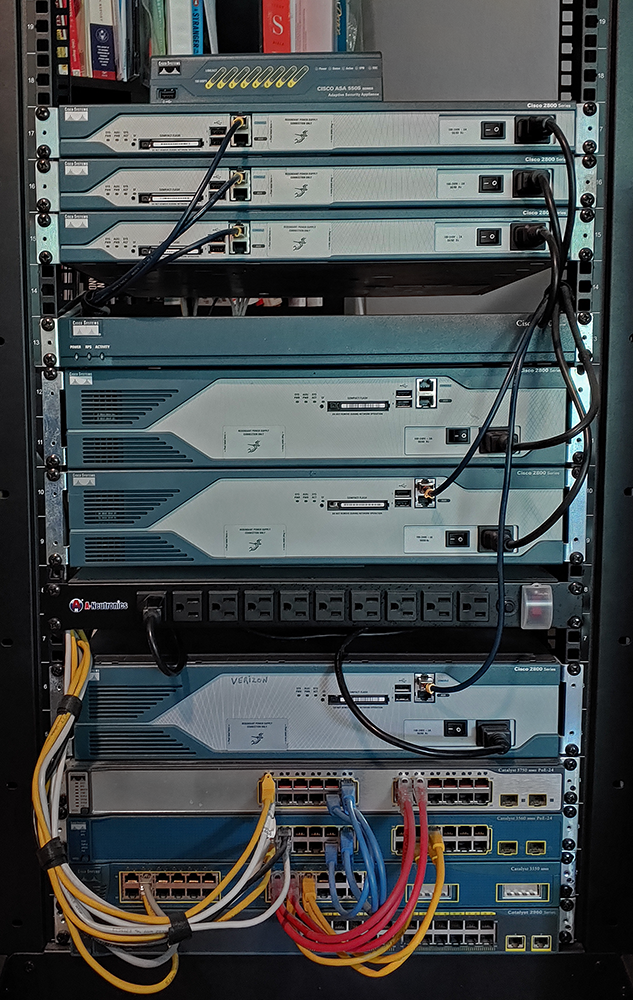 First thought was another HTPC migration. This time I went in a completely different direction. Instead of building or acquiring a new PC, I bought a QNAP NAS and an NVIDIA Shield. The drives on the QNAP are WD chucked drives ranging from 8 to 10 TB. They are close to capacity. The NAS is very efficient and fast enough to serve 4K files over the network with zero issues. The goal here was to be able to play lossless audio Atmos and DTS:X tracks from 4K movies. The Shield sits in a dedicated theater room and can play all the files flawlessly. In addition to this, I also repurposed a work computer that I got to keep to use for my media management. I moved some services I was running on the QNAP to this PC. It is an HP EliteDesk running Ubuntu Server headless. This machine hosts a series of services deployed using Docker via a docker-compose file. The services include Radarr, Sonarr, Deluge, and many more.

Around this time I also acquired my first production firewall, an ASA 5506. This firewall is still working great.

Now that my all-in-one consumer router was removed from the equation, I also needed to add some wireless APs to my home network. I landed on an Unifi UAP-AC-PRO. This AP was placed in a location in my home that would provide coverage to most of the house. I never had any issues with it but a friend gifted me four Cisco 2702i and 1852e. I sold the Unifi AP and deployed the Cisco AP in autonomous mode. The four APs provided much better coverage as is expected. The amazing thing is that these APs can be had for next to nothing on the used market. I have deployed several of the 2702i APs at the homes of family members and neighbors. With that being said, they are not for everyone as setting them up via CLI can scare some people off. Another addition during this time was a Meraki switch with PoE to power the APs. 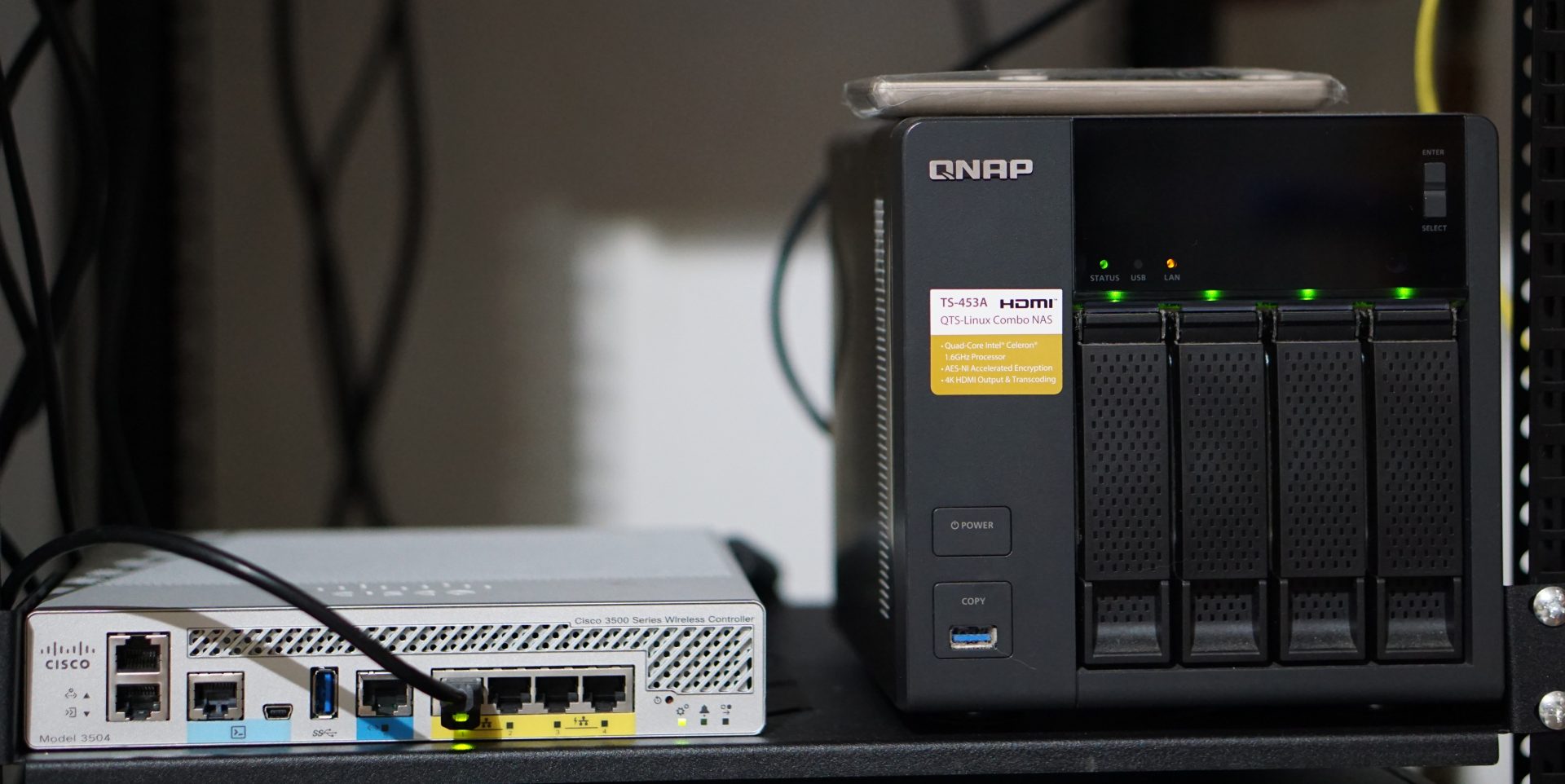 This brings us to my most recent acquisitions. The first one was the Dell R730xd. Obviously, my wife had to name it as soon as she saw it. She settled on “The Beast.” This was and is the biggest investment I made so far. This server is currently only using one SSD drive. Will need to recoup before adding more storage. Anyway, it is currently running EVE-NG on bare metal. While my first introduction to emulation was years ago with GNS3, I recently moved to EVE-NG. What I like the most about EVE-NG is that it runs on the browser and no application install is necessary. I have also noticed that at least for networking there appears to be more tutorials and labs available. While the physical lab I had back in the day allowed me to set up a certain topology and follow a class, it was difficult to change and adapt without expending a lot of time to setup. This is where tools like EVE-NG and GNS3 shine. It is incredible how fast it is to go from deploying a lab, modifying it, closing it, going back to it, moving onto another one, importing and exporting to share with coworkers. It has really changed the way I learn. Below are some examples showing labs I build and use with EVE_NG. 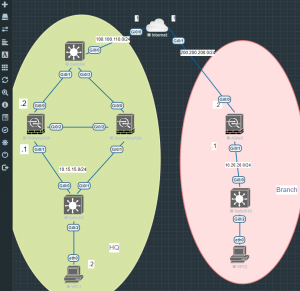 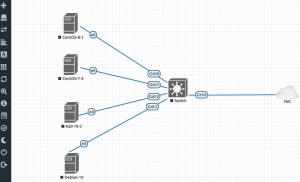 In addition to the server, I also added a rack, a Cisco 2960X Switch, a WLC 3504, and a Raspberry pi 4. The APs are now managed through the WLC. Pihole which was running on the QNAP and then the HP machine is now running on the Pi. I also moved everything to the garage. It is climate-controlled.

I plan to add some VLANs in the next couple of weeks. Although the switch is L2 only, it does allow the use of static routes. I will let the switch handle the VLAN routing instead of the ASA. I will also spend some time cleaning the cabling and doing some reruns with Cat6a.

Next year I hope to add some SAS SSDs and HDDs to the Beast. I will then move to VMware and add EVE-NG in addition to other images. I also plan on adding another server when prices go down and setting up some hypervisor to host VMs. It looks like I will be moving to the new Epyc processors as well. The HPE DL325 line looks very interesting. I am currently learning Linux with CentOS 7.3 and 8.1 on EVE-NG. Hopefully, a Redhat cert coming soon. I will try to move or merge networking with cybersecurity.

All in all, I have been very happy and lucky with the progress I’ve made and look forward to what the future holds. This is a great hobby to be a part of. 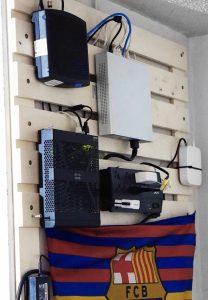