HP’s Z2 G8 Tower is an entry-level workstation desktop based on Intel’s “Rocket Lake” Core and Xeon processors. It supports a single CPU, two GPUs, 128GB of memory, two M.2 PCIe SSDs (including one Gen4), and one 2.5-inch and two 3.5-inch drives. It has excellent performance potential for content creation, 3D modeling, and is also suitable for scientific and financial use.

HP’s Z2 G8 Tower is an entry-level workstation desktop based on Intel’s “Rocket Lake” Core and Xeon processors. It supports a single CPU, two GPUs, 128GB of memory, two M.2 PCIe SSDs (including one Gen4), and one 2.5-inch and two 3.5-inch drives. It has excellent performance potential for content creation, 3D modeling, and is also suitable for scientific and financial use.

Though it doesn’t offer advanced workstation features such as dedicated RAID cards and hot-swappable drives, this tower’s purpose is to provide affordable workstation-grade performance. It does that very well based on our testing and comes highly recommended.

HP’s Z2 workstation line starts with the Z2 Mini, a tiny yet powerful desktop that can be mounted behind a monitor. Up from there is the small-form-factor Z2 SFF G8, which is more of a true desktop. The third and largest model is the mid-tower Z2 G8 Tower under review here. Next to the SFF model, the Z2 G8 Tower offers the same CPU and memory options but more powerful GPUs (up to the 24GB Nvidia RTX A5000) and more storage drives. 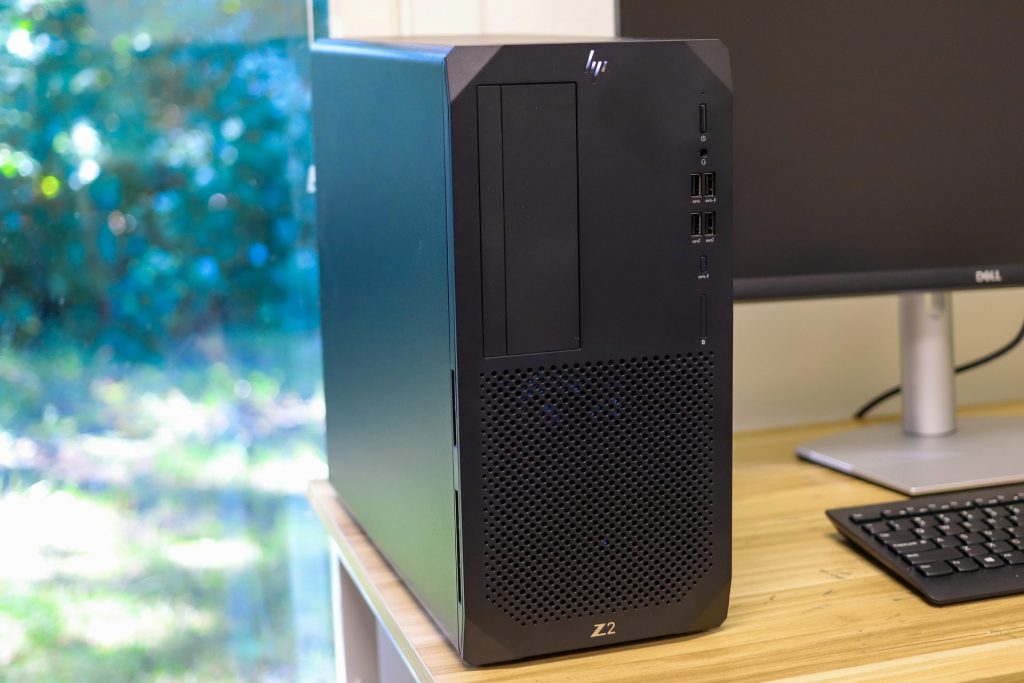 The Z2 G8 Tower is based on Intel’s W580 chipset and “Rocket Lake” Core and Xeon processors, which allow it to support PCIe Gen4. The top CPU choices are the eight-core, 95-watt Core i9-11900K and the 125-watt Xeon W-1390P, both capable of a scorching 5.3GHz. The Xeon options are required for Error Correcting Code (ECC) memory support but unless you need it, the Core chips offer superior value.

Memory options top out at 128GB via four slots. That’s not nearly as much as HP’s significant step-up Z4 Tower (its maximum is 512GB), but for the tasks for which this tower is intended, it’s appropriate. Meanwhile, storage is plentiful with two M.2 Type-2280 PCIe slots, one of which is PCIe Gen4, and one 2.5-inch and two 3.5-inch bays. More internal M.2 drives can be added via a caddy.

What you won’t find on an entry-level workstation like this are dedicated RAID controllers (it offers just RAID 0 and 1), extensive PCIe expansion, and externally accessible or hot-swappable drives. Including such features would defeat the Z2 G8 Tower’s purpose of providing a value option for those that want a business-grade i.e., highly dependable platform yet do not require advanced workstation features.

That said, the Z2 G8 Tower isn’t bereft of remote tools; it can be accessed from anywhere with ZCentral Remote Boost, which we covered in our video walkthrough.

The Z2 G8 Tower’s professional look comes from its all-black case and conventional lines. The folded-in front corners and HP’s reflective logo give it a little style. The front panel is plastic, but the rest of the tower is sturdy steel. 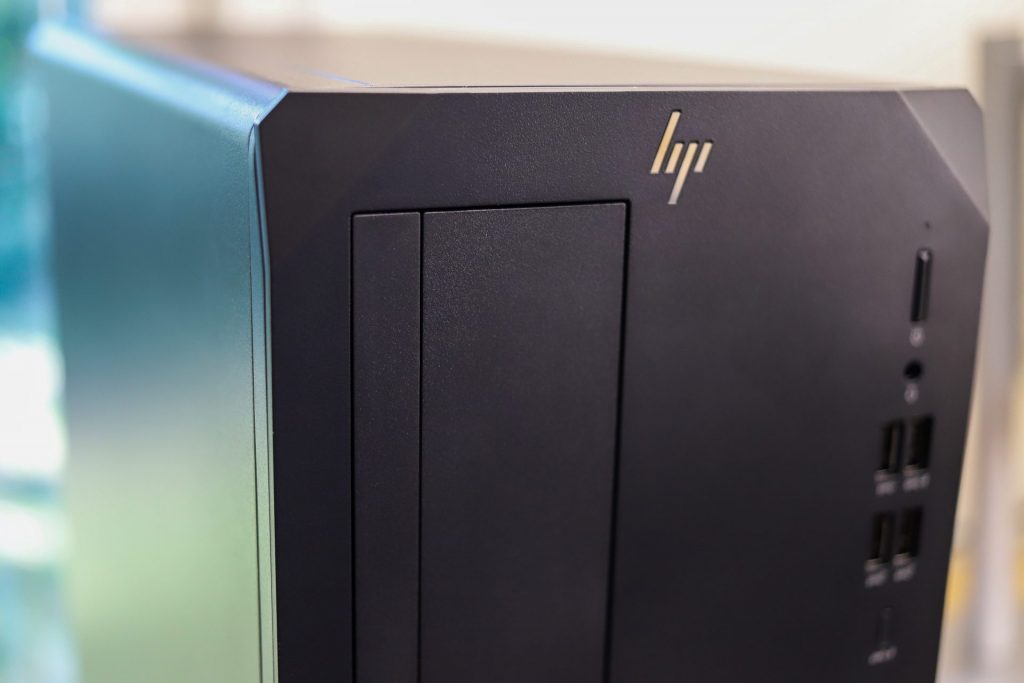 The Z2 G8 Tower measures 15.2 by 14 by 6.7 inches (HWD) and starts at 15.4 pounds, which is within expectations for a mid-tower. You can see its relative footprint here with a USB storage drive for scale. 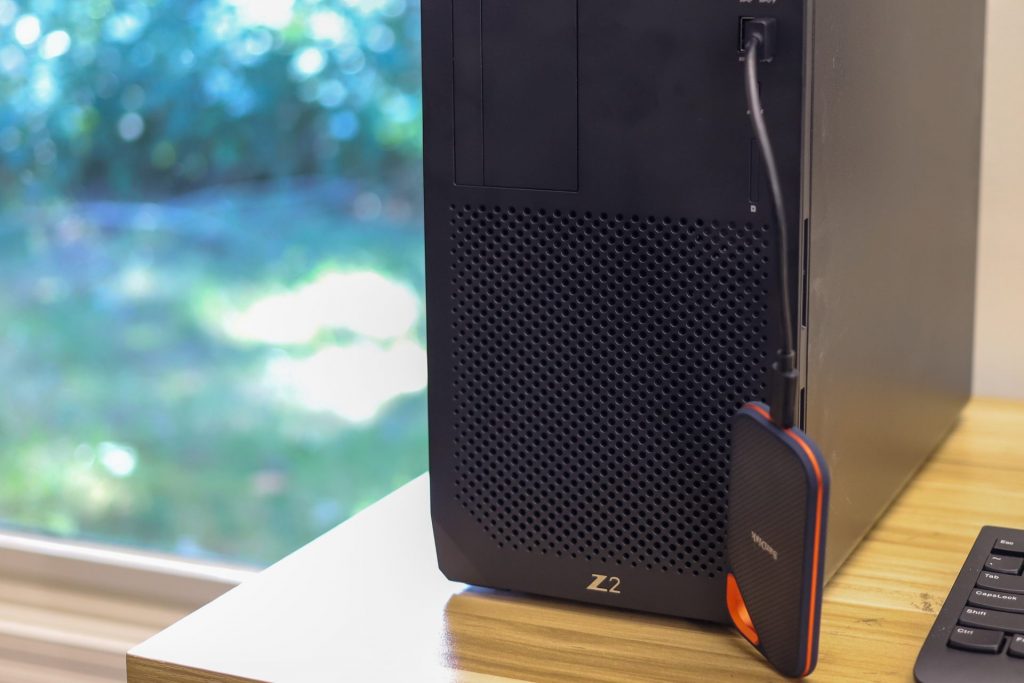 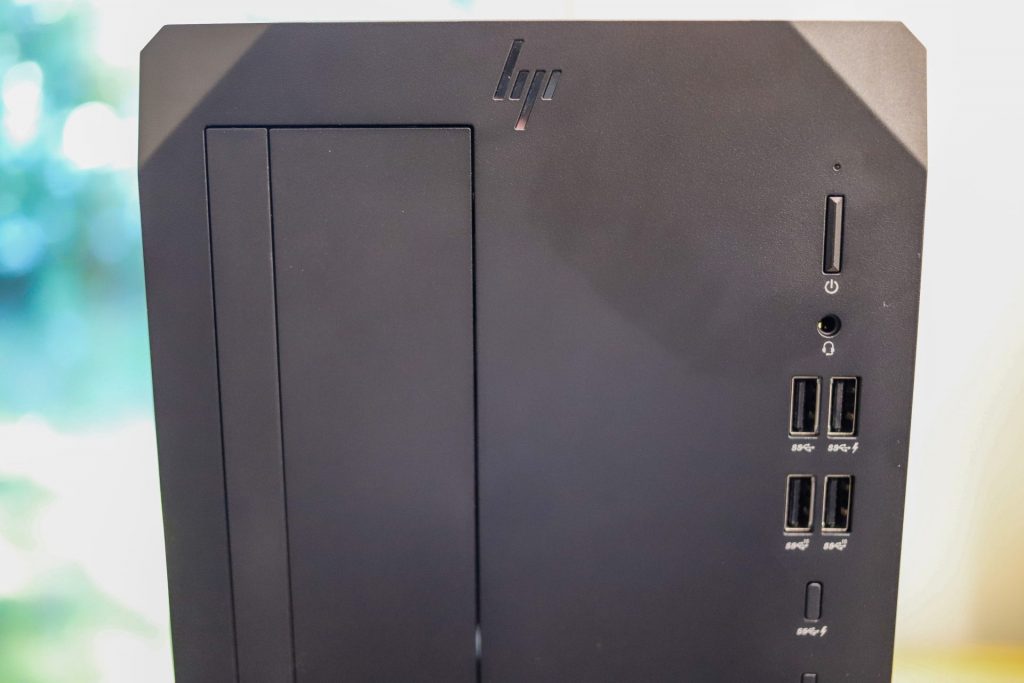 The rear connectivity includes six more USB Type-A ports (two 3.2 Gen 2, one 3.2 Gen 1, and three legacy 2.0), RJ-45 Ethernet, line-in and line-out audio jacks, and a pair of DisplayPort connectors. The latter are disabled since our review unit has a dedicated Nvidia graphics card with four of its own DisplayPort connectors. The filler just above the USB port cluster can host an optional serial port. 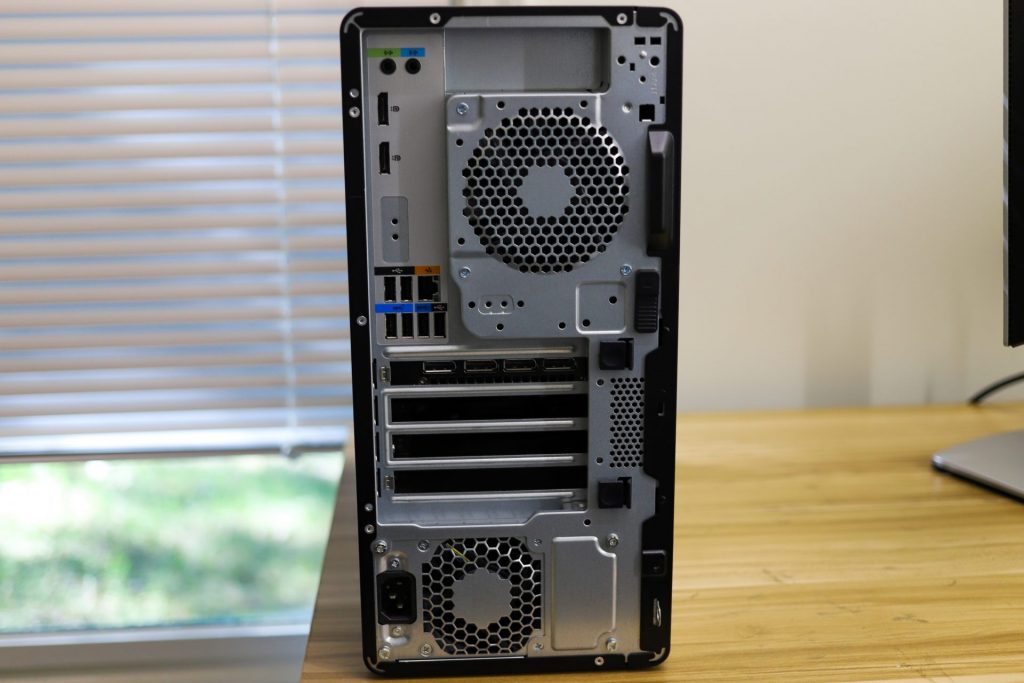 HP offers a variety of networking cards and wireless connectivity, of which our unit isn’t equipped. (The motherboard has a PCIe 3 x1 M.2 Type-2230 slot for wireless cards.) Also visible behind the tower are the rear-facing exhaust fan and the power supply; our unit has the most powerful 700-watt model since it is outfitted with an eight-core CPU and an upper-end GPU. The CPU is air-cooled by a tower-style heatsink. The system remained quiet under load and didn’t make itself heard above the usual office background noise.

The left-side panel comes off with a tug after sliding a switch for easy access. As this isn’t a showy gaming desktop, the bare metal insides and average cable management are forgivable (and certainly help keep the cost down). 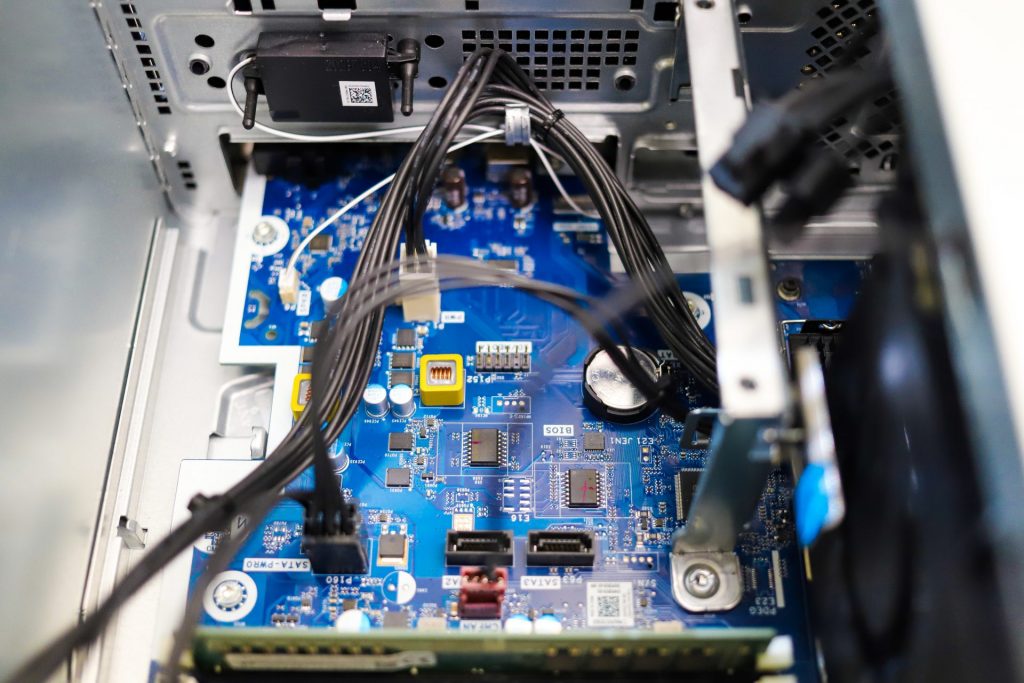 Our review unit has two M.2 Type-2280 solid-state drives; the one with the Samsung logo is a Samsung PM9A1 Gen4 drive. HP brands it as a Z Turbo SSD and does not guarantee the same drive is used in all configurations. The other M.2 Type-2280 slot is Gen3. Both M.2 Type-2280 slots are x4. 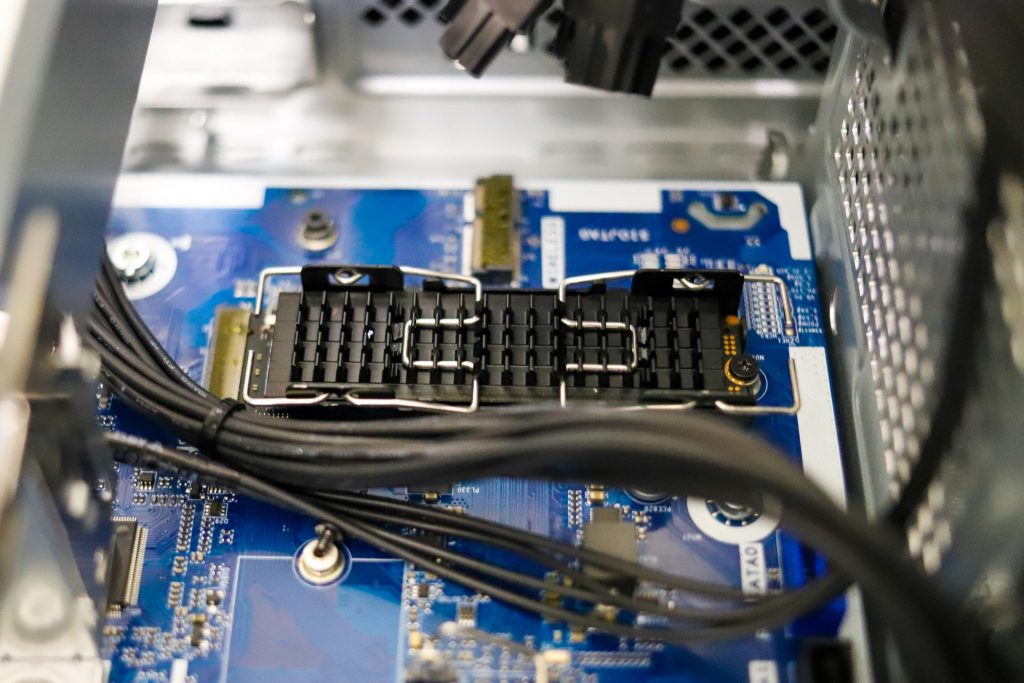 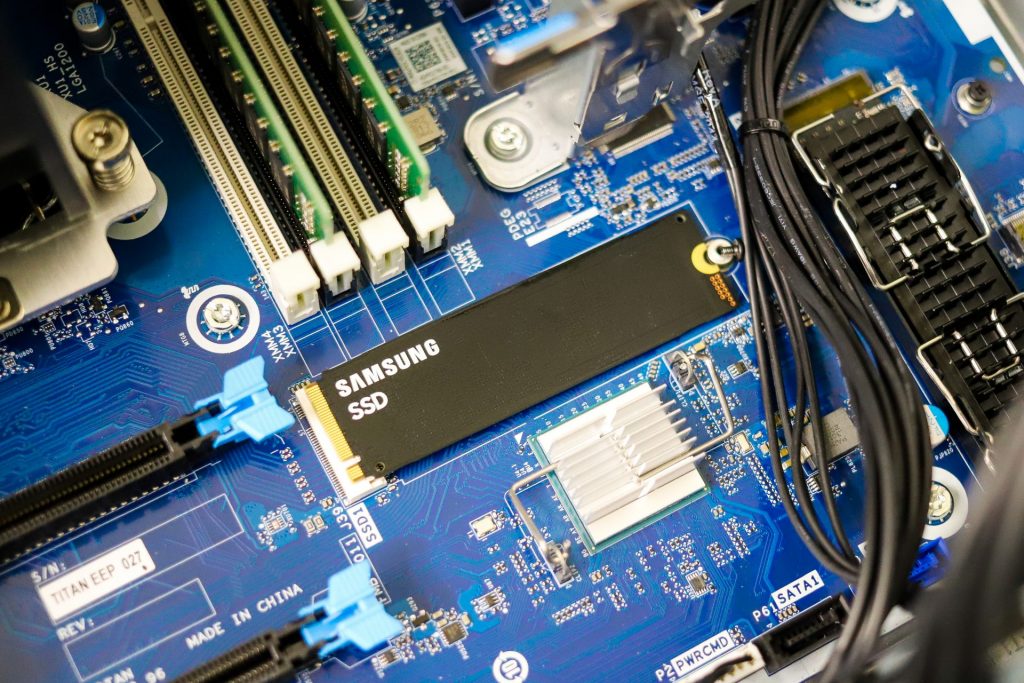 Just above it are four UDIMM slots; the Z2 G8 Tower tops out at 128GB of memory, including ECC options with Xeon CPUs. Our Core-based unit has two 16GB DDR4-3200 modules for 32GB total running in dual-channel mode.

For additional storage, the Z2 G8 Tower supports up to two 3.5-inch and one 2.5-inch drive. A PCIe card can also be installed to host additional M.2 drives.

We tested the Z2 G8 Tower with both an Nvidia T1000 and a more power-hungry RTX A4000, both single-slot cards that leave the remaining PCIe slots open. (The latter is pictured below.) The GPU is installed in the only PCIe Gen4 x16 (x16 connector) slot. The other three PCIe slots are Gen3, which include two x4 slots (one x16 connector and one x4 connector) and an x1 slot (x4 connector). 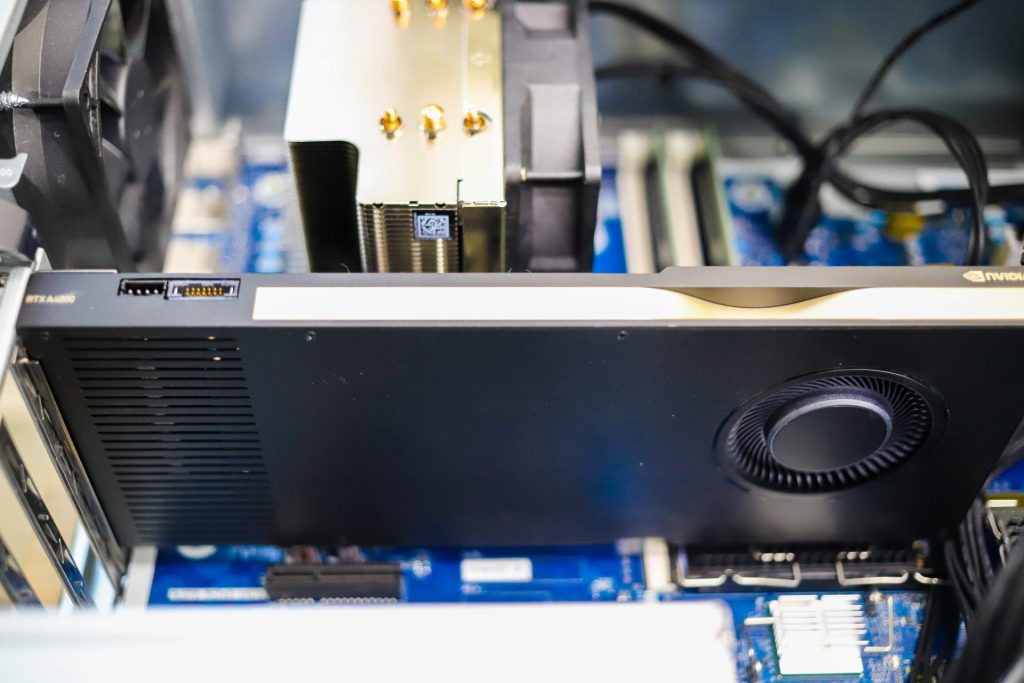 The Z2 G8 Tower being tested here has these specifications:

The Z2 G8 Tower starts at a teasingly low $1,219, but that price does not include a dedicated GPU, just relying on the Intel CPU’s UHD 730 integrated GPU, which does not qualify it as a workstation in our view. It also has just a six-core Core i5 processor. On the contrary, our upper-end review unit is nicely balanced with an eight-core Core i7-11700 CPU, 32GB of memory (non-ECC), and a 1TB PCIe Gen4 NVMe SSD. We were able to test it with two GPUs; it goes for $2,538 with the Nvidia T1000 (4GB GDDR5) and $3,110 with the RTX A4000 (16GB GDDR6 ECC). Those prices include a three-year warranty, though the base model has just one year. The pricing can vary greatly depending on how you purchase the Z2 G8 Tower, especially if you have access to fleet discounts.

The Core i7-11700 CPU deserves a callout. It’s offered as the 65-watt chip, or as the K-series Core i7-11700K which comes in at 125 watts. The K-series chip will be superior for long-running tasks that continuously stress the CPU since its higher power limit will allow it to sustain higher clocks. The performance between the two will be similar for everything else.

Also notable about the Core CPUs is that they don’t require a pricey Windows 10 Pro for Workstations license, which is required with the Xeon chips that HP offers in this model. You can, of course, spec it with Linux for no cost.

Competition for the Z2 G8 Tower chiefly comes from the Dell Precision 3650 and the Lenovo ThinkStation P340, also mid-towers. Like HP, they too do not offer advanced workstation features to keep their prices down. Highlighting this segment’s competitiveness, their CPU, GPU, memory, and storage options are almost identical to what HP offers.

Let’s get testing. For tests that engage the GPU, we have result sets with the Nvidia T1000 and the RTX A4000 cards, as HP was nice enough to send us both. 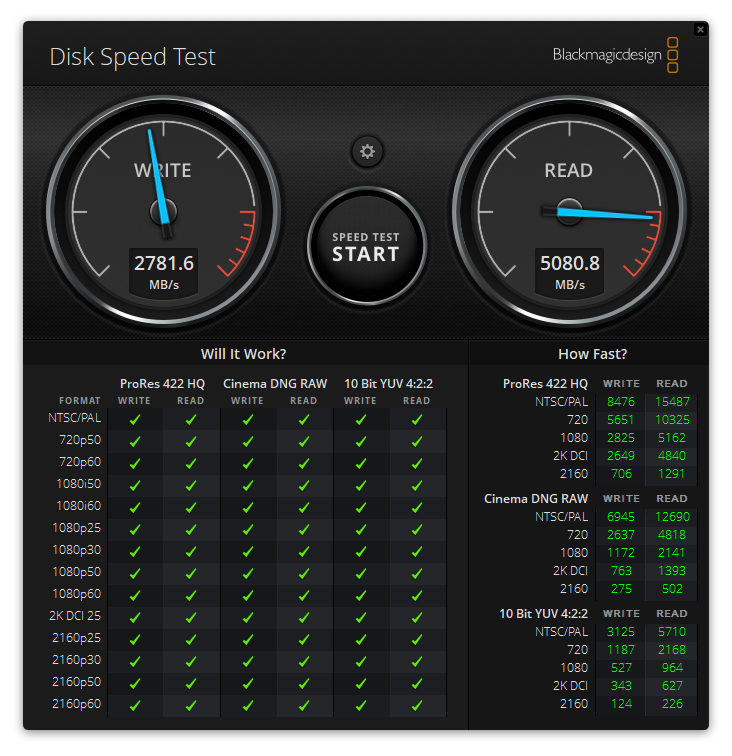 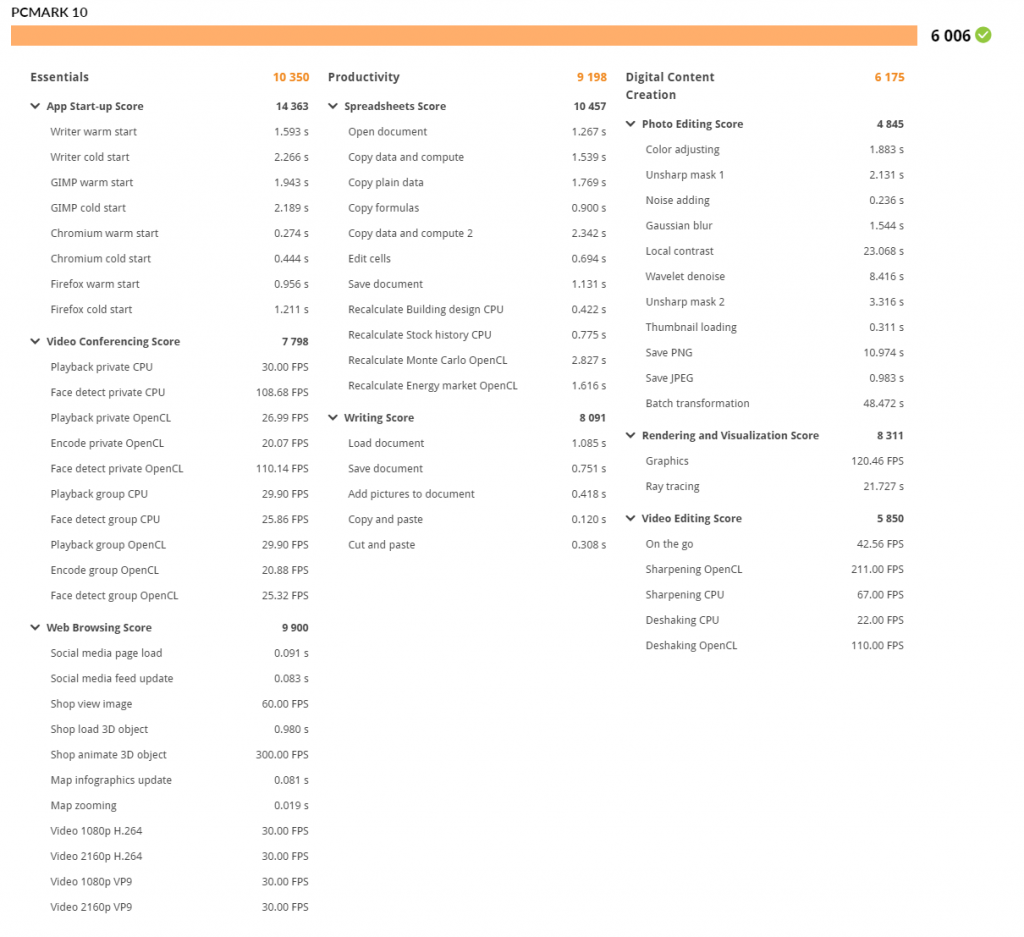 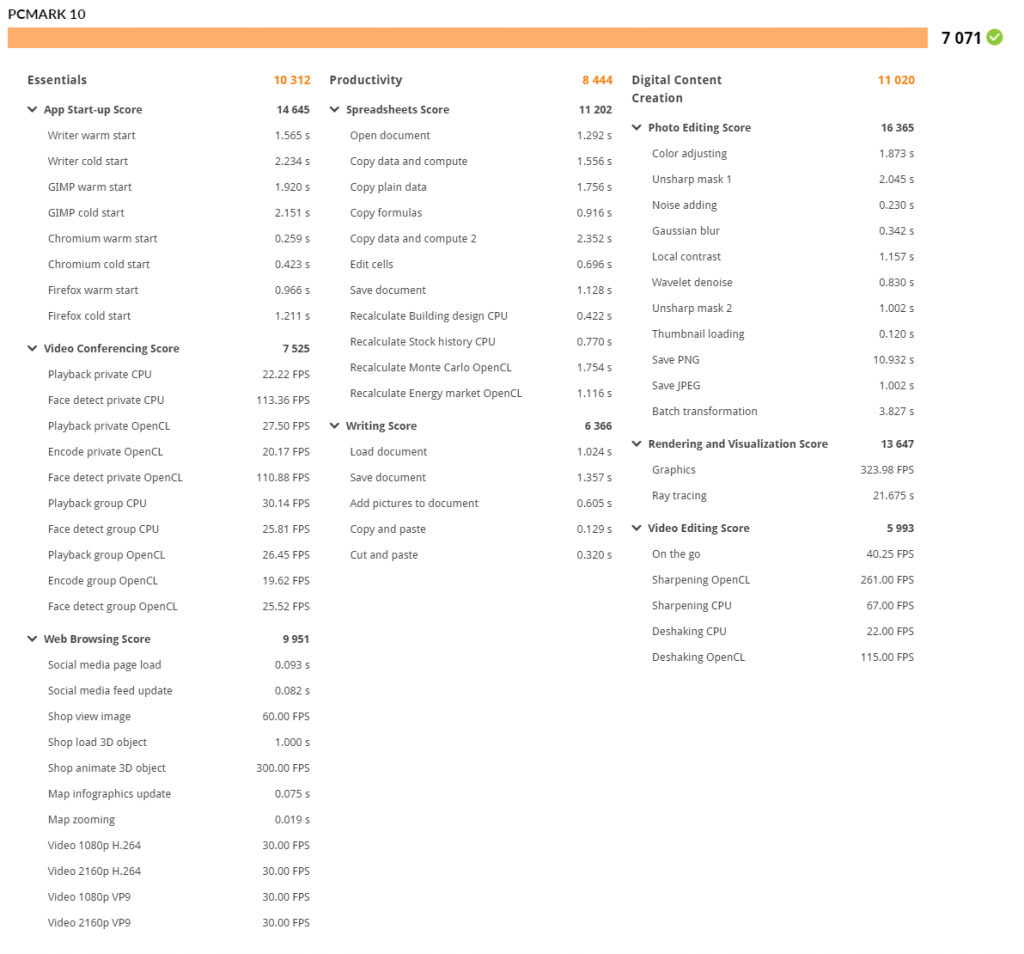 Next is SPECviewperf 2020, the worldwide standard for measuring graphics performance of professional applications running under the OpenGL and Direct X application programming interfaces. The viewsets (or benchmarks) represent graphics content and behavior from actual applications, without having to install the applications themselves. The newest version of this benchmark went through some major updates late last year, including new viewsets taken from traces of the latest versions of 3ds Max, Catia, Maya, and Solidworks applications. In addition, they added support within all viewsets for both 2K and 4K resolution displays. Our tests were run with a windowed resolution of 3800×2120.

As expected, the Nvidia RTX A4000 shows vast performance improvements over the T1000. The RTX A4000’s 16GB of dedicated memory is noteworthy for its ECC support, making it suitable for scientific and financial applications.

Moving on with our performance benchmarks, we ran SPECworkstation3. This is a test that specializes in benchmrks designed for testing all key aspects of workstation performance; it uses over 30 workloads to test CPU, graphics, I/O, and memory bandwidth. The workloads fall into broader categories such as Media and Entertainment, Financial Services, Product Development, Energy, Life Sciences, and General Operations. We are going to list the broad-category results for each, as opposed to the individual workloads. The results are an average of all the individual workloads in each category.

Some numbers are largely unchanged with the faster RTX A4000 (for instance, FSI and GeneralOps) because they aren’t GPU-bound. That said, the GPU Compute results clearly shows the RTX A4000’s power.

Next up is Blender, an open-source 3D modeling application. This benchmark was run using the Blender Benchmark utility. NVIDIA OptiX was the chosen render method. The score is in seconds, with lower being better. These scores again illustrate the RTX A4000’s superior performance; it’s simply in a different class (when is especially apparent when considering the upgrade cost from the T1000).

First up is the Montreal model, where the Z2 G8 Tower continued showing solid gains when equipped with the RTX A4000 instead of the T1000. We also observed this effect in the other two models.

The Philly model is next.

Last up is the Portland animation.

HP’s Z2 G8 Tower is a credit to what an entry-level workstation can do with its ample performance, expansion, and factory configurability. This mid-tower is the largest model in HP’s Z2 lineup, offering more powerful GPUs and power supplies than the smaller Z2 SFF G8. Our review unit’s “Rocket Lake” Core i7 processor and PCIe Gen4 SSD performed well throughout our testing, especially when paired with the Nvidia RTX A4000 GPU.

Pricing is an important buying factor with workstations, and that’s where the Z2 G8 Tower shines, not making you pay for advanced workstation features if you don’t need them (as you might find on HP’s Z4 tower and equivalent towers from Dell and Lenovo). This is especially evident with the CPU options, which include Intel’s consumer-class Core line; you aren’t forced to pay for Xeon chips with ECC memory, though they are available. Though the CPU options top out at eight cores, they’re sufficiently powerful for tasks that are appropriate for a workstation in this class.

Simply put, for more advanced features and scalable performance, you’ll need to step up to the next workstation tier. Otherwise, the Z2 G8 Tower is an excellent entry-level option.