The new HP Z2 Mini G5 is the company’s a super-compact workstation that can output some pretty solid performance despite its tiny form factor, as this high-end machine is built to excel in simultaneously running 3D design projects and multiple pro apps. Interestingly enough, HP also indicates that the Z2 Mini G5 can be used as a capable gaming machine when outfitted with a dedicated GPU, noting that 34% of people that use their work computers are actually used for gaming. This number has probably grown even larger by now due to the significant increase of users working from home.

The new HP Z2 Mini G5 is the company’s a super-compact workstation that can output some pretty solid performance despite its tiny form factor, as this high-end machine is built to excel in simultaneously running 3D design projects and multiple pro apps. Interestingly enough, HP also indicates that the Z2 Mini G5 can be used as a capable gaming machine when outfitted with a dedicated GPU, noting that 34% of people that use their work computers are actually used for gaming. This number has probably grown even larger by now due to the significant increase of users working from home. 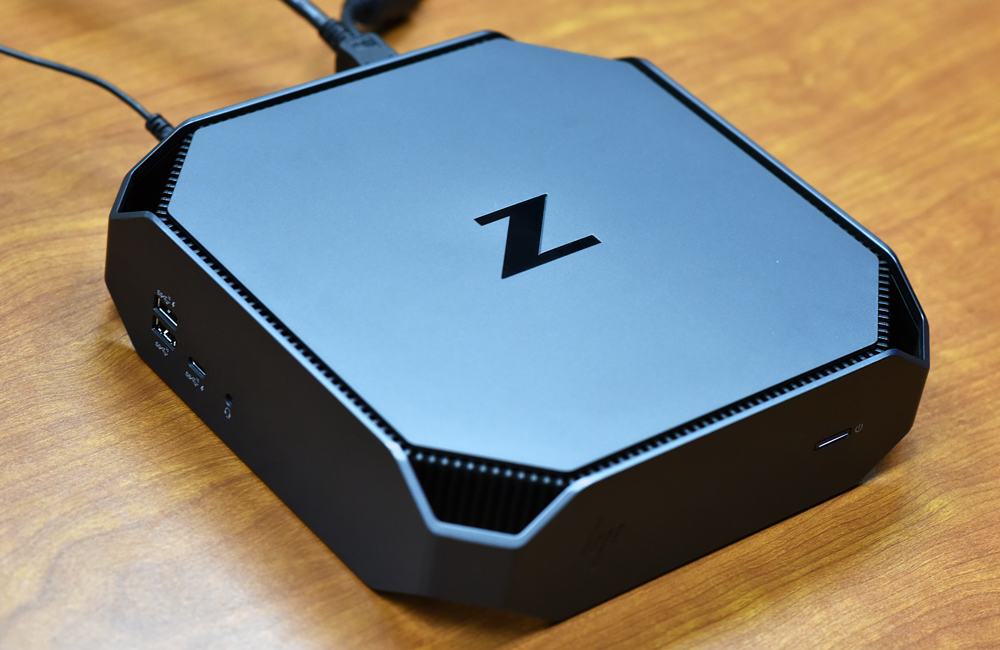 The enclosure hasn’t changed much (if at all) from the previous generation, so this is a progressive update more than anything. That said, it comes in 9 different modules, allowing users to add components and functionality like Thunderbolt 3, Serial, additional video outputs, and more depending on user needs. Users also have the option of installing Windows 10 Pro 64 or Linux operating systems and can attach up to six displays (four of which are native with the remaining two being daisy-chained).

The biggest change with the new Z2 Mini is its available components, as this is a highly customizable workstation (especially for a system of this size). For example, users can equip the Z2 Mini G5 with a range of 10th generation Intel Core CPUs, including the budget-friendly i3-10100 (4 cores 3.6 GHz CPU with up to a potential 4.3 GHz) all the way up to the powerful Xeon W-1250 (6 cores 3.3 GHz CPU with up to a potential 4.7 GHz), which supports Intel vPro Technology. Users also have the option to outfit the Z2 Mini with several different entry-level professional graphics cards, including the NVIDIA Quadro P620 (4GB GDDR5 dedicated), NVIDIA Quadro T2000 (4 GB GDDR6 dedicated), and the AMD Radeon Pro WX 3200 (4 GB GDDR5 dedicated). In addition, users can choose from a range of different storage options like SATA SSDs or HDDs up to 500GB and 2TB, respectively, or HP Z Turbo Drive PCIe NVMe SSD M.2 options for speedy overall performance. The Z2 Mini is a bit limited in how much memory it can take, though its maximum of 64GB DDR4 should be plenty for most user applications.

HP also dubs the Z2 Mini G5 as their most secure workstation yet. All models come shipped with advanced security features, including System safeguards like self-healing BIOS to help lock the workstation so your data and identity are untouchable. You can also install these workstations on a rack, and the HP ZCentral solution supports 7 Mini’s in 5U for a total of 56 in a standard 42U rack for some pretty heft density.

For this review, we outfitted the next-gen Mini with an Intel Comet Lake i7-10700K, 2x16GB of DDR4 RAM, an NVIDIA Quadro T2000, and two Z Turbo 2280 NVMe SSDs (512GB and 1TB). The workstation is backed by a 3-year standard limited warranty with the option to add other protection.

The HP Mini G5 is a seriously compact system and can be positioned pretty much anywhere. You can mount it behind your monitor, place it discretely under or on your desk, or install up to 56 of them on a 42U rackmount. 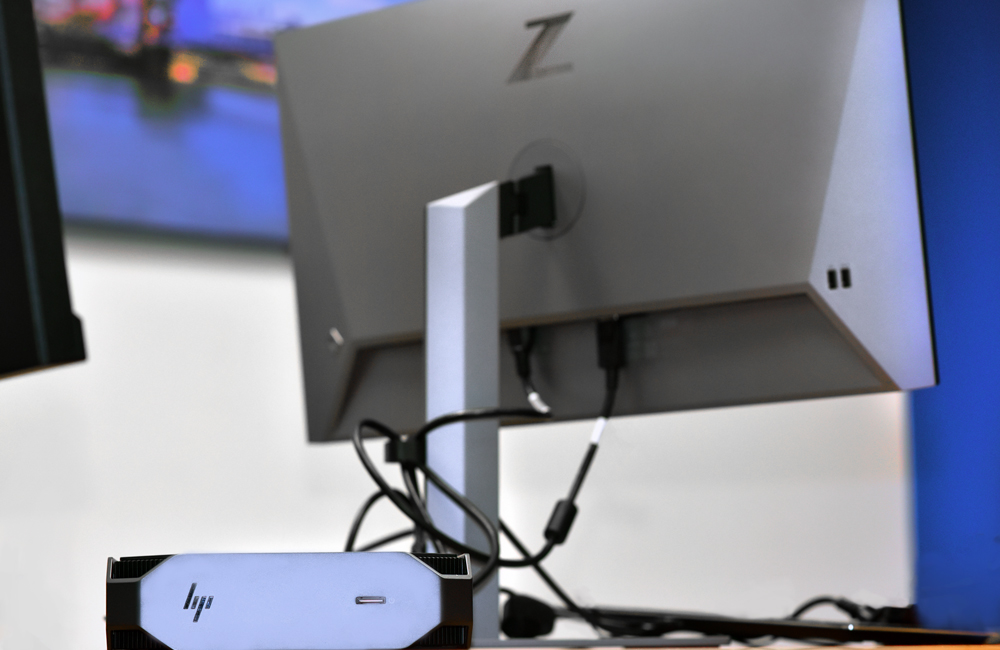 Each of the Mini’s corners has a ventilation grill, which takes in cool air from the front, flows the air across the internal components, and then exhausts it out the back. When putting it through a heavy workload, the fan operation was still quiet. 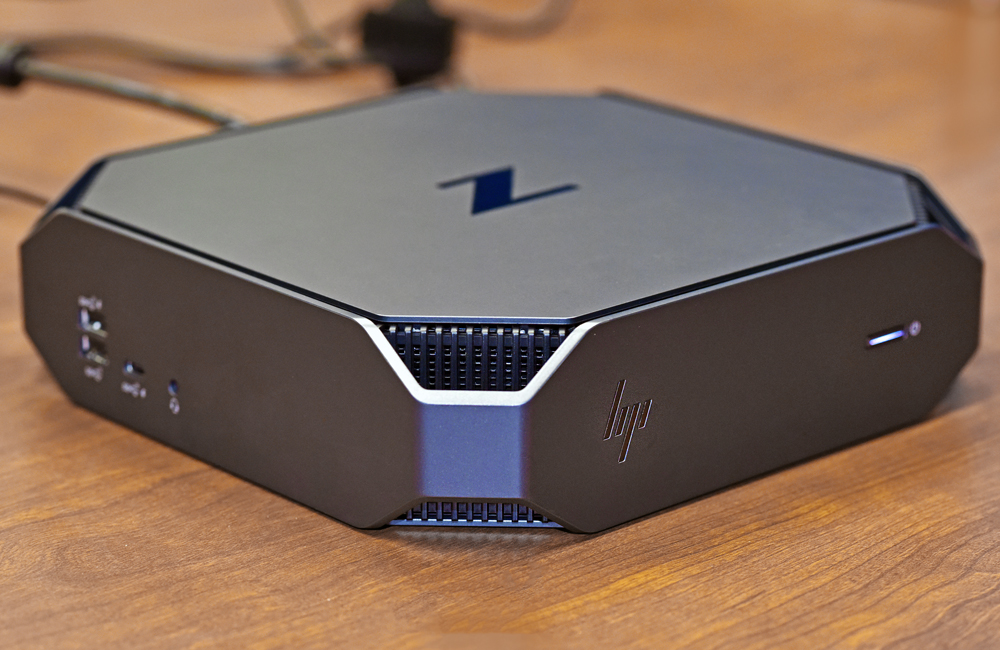 The front of the HP Mini G5 has a minimalist design, with only the power button and HP logo. This goes for the top panel as well, which just has a stylistic Z in the center. Overall, this will look nice anywhere you put it, even though it’s also meant to hide away on a rack in a server room. 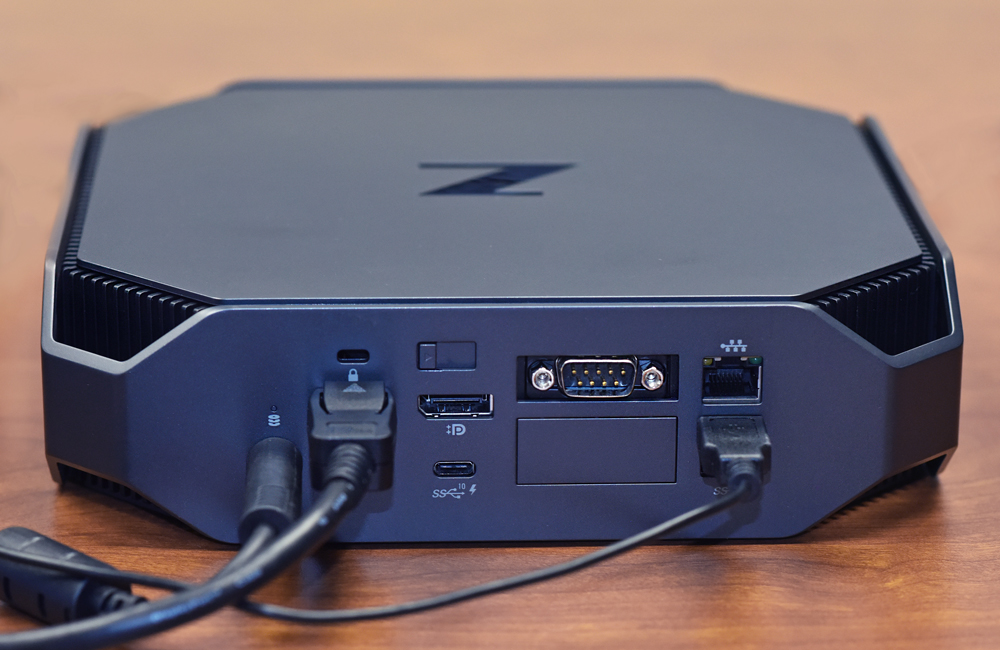 Opening up the HP Mini is easy: simply slide the release latch located above the DisplayPorts around the back, then lift the top cover off. 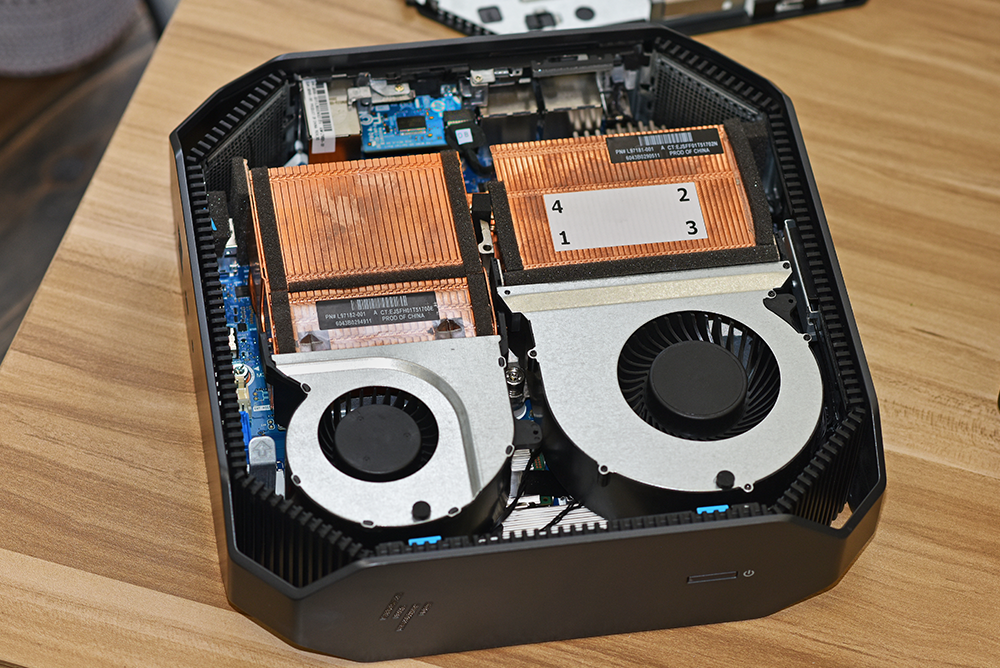 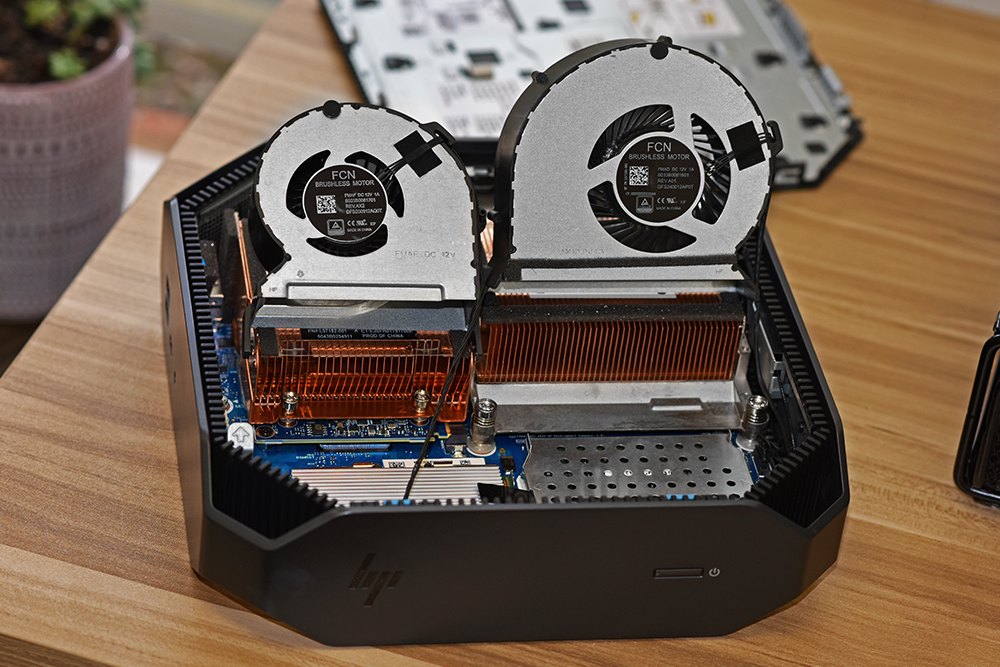 To gauge its performance, we put the HP Z2 Mini G5 workstation through four resource-intensive tests, which will allow us to see what it is capable of when equipped with an Intel i7-10700K, 2x16GB of DDR4 RAM, an NVIDIA Quadro T2000, and two Z Turbo 2280 NVMe SSDs. We also compared it to two newer HP mobile workstations, the HP ZBook 15 G6 (Intel Xeon E-2286M CPU, 64GB of DDR4, 2667MHz RAM, 1TB NVMe SSD, and an NVIDIA Quadro RTX 3000 GPU) and an HP ZBook Studio x360 G5 (Intel Core i9-8950HK, 64GB of DDR4 non-ECC RAM, NVIDIA P2000 GPU, Toshiba XG5 512gb NVMe SSD). Though the former of these two laptops are equipped with a far superior graphics card, we want to demonstrate the differences in performance so you can determine what product might best suit your needs. 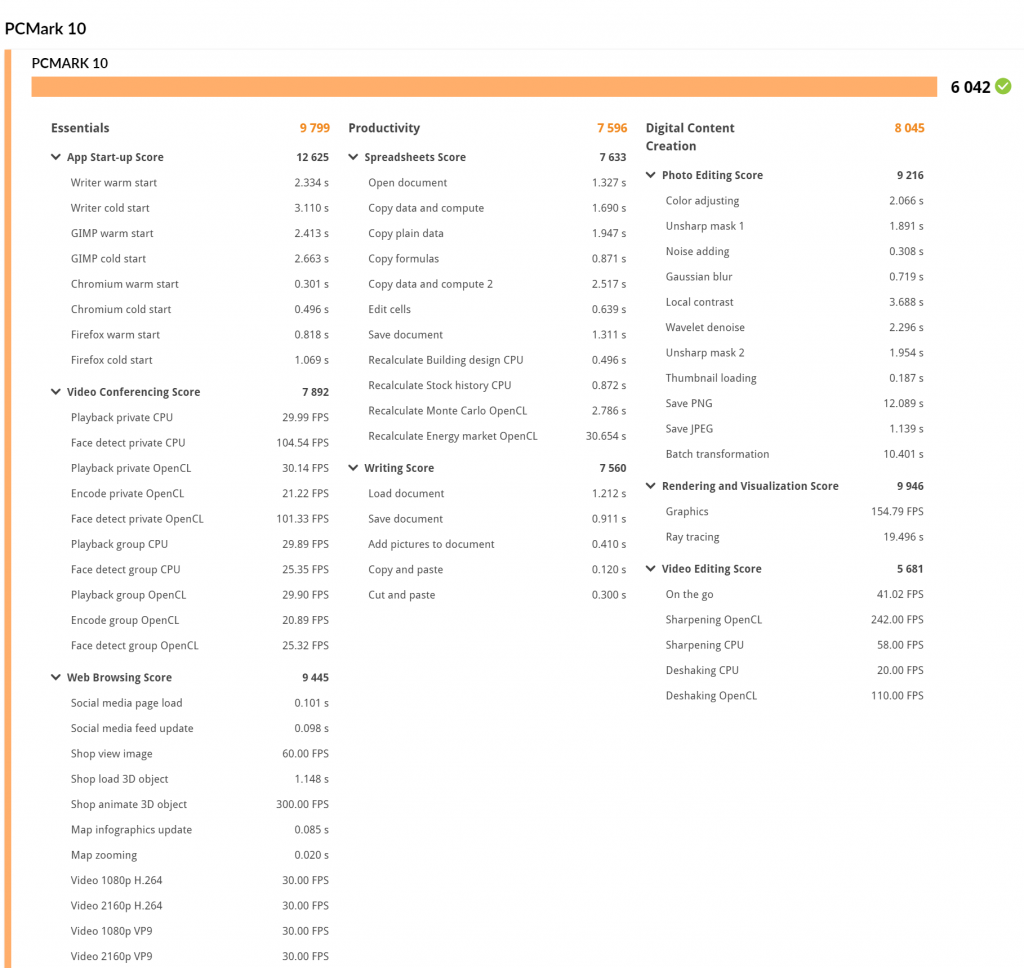 The Z2 Mini G5 had solid results for its class with an overall score of 6,042. This comprised of 9,799 in essentials, 7,596 in productivity, and 8,045 in digital content. It slowed down a bit in the latter score (specifically in video editing), though this was expected due to the limitations of a 4GB graphics card.

The Z2 Mini G5 will be our first workstation to use this new version of SPECviewperf, which went through some major updates on October 14, 2020:

Next up is the SPECworkstation3 test, a benchmark that is designed to measure all key aspects of workstation performance; it uses over 30 workloads to test CPU, graphics, I/O, and memory bandwidth. The workloads fall into broader categories such as Media and Entertainment, Financial Services, Product Development, Energy, Life Sciences, and General Operations. We are going to list the broad-category results for each, as opposed to the individual workloads. The results are an average of all the individual workloads in each category.

In the SPECworkstation3 test, results showed that the Mini is capable of easily handling these workloads, posting some great results for its class.

Next up is the Environmental Systems Research Institute (Esri) benchmark. Esri is a supplier of Geographic Information System (GIS) software. Esri’s Performance Team designed their PerfTool add-in scripts to automatically launch the ArcGIS Pro. This application uses a “ZoomToBookmarks” function to browse various pre-defined bookmarks and create a log file with all the key data points required to predict the user experience. The script automatically loops the bookmarks three times to account for caching (memory and disk cache). In other words, this benchmark simulates heavy graphical use that one might see through Esri’s ArcGIS Pro software. The tests consist of three main datasets. Two are 3-D city views of Philadelphia, PA, and Montreal, QC. These city views contain textured 3-D multipatch buildings draped on a terrain model and draped aerial images. The third dataset is a 2-D map view of the Portland, OR region. This data contains detailed information for roads, land use parcels, parks and schools, rivers, lakes, and hill shaded terrain.

The HP Z2 Mini G5 is a uniquely, ultra-compact workstation that is capable to deliver some pretty solid performance for its class. Though small, you can still outfit the HP workstation with a range of different components to build a decent mid-range workstation experience excels in environments that use resource-intensive professional software. Users can outfit their mini with 10th generation Intel Core CPUs, including the powerful Xeon W-1250 (6 cores 3.3 GHz CPU with up to a potential 4.7 GHz) while having several different NVIDIA Quadro professional graphics card options (and a single AMD option, the Radeon Pro WX 3200 with 4 GB GDDR5). In addition, users can choose from a range of storage options including a couple of HP Z Turbo M.2 drives, which use the speedy PCIe NVMe SSD interface. Those going the high-end components route will find that the price tag will reach over $4,000; though that might seem high, this seems to be the going rate for mid-range workstations outfitted with its top-tier component builds. 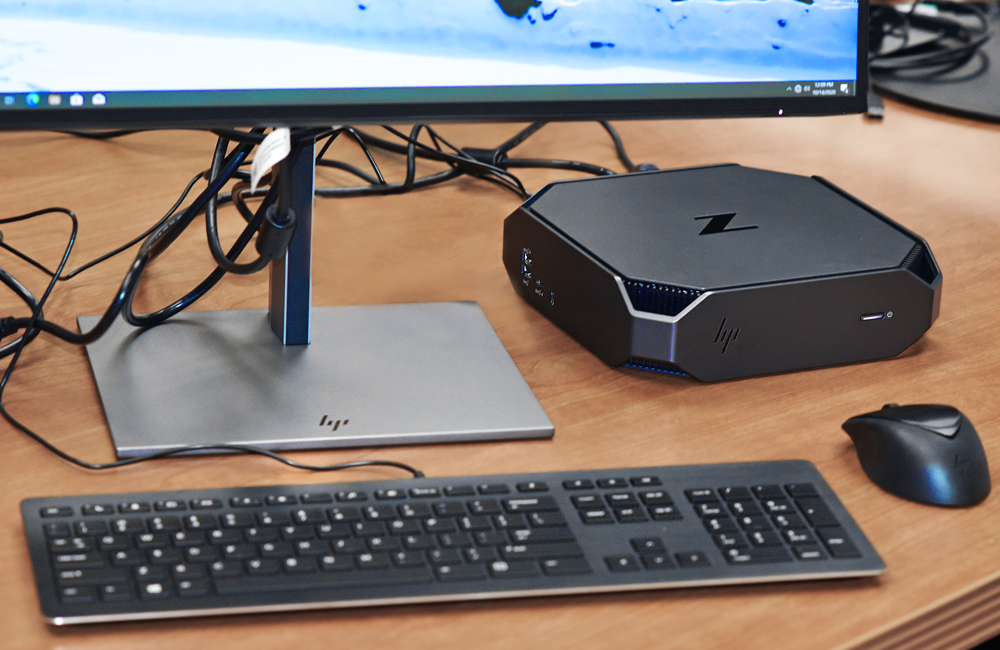 To gauge the overall performance of the HP Z2 Mini G5, we ran it through some benchmarks that use both resource-intensive and casual workloads, starting with the PCMark10 benchmark, a Windows PC test that focuses on modern office tasks. Here, the Mini recorded an overall score of a solid 6,042, which comprised of 9,799 in essentials, 7,596 in productivity, and 8,045 in digital content. The last score bogged down a bit due to the video editing area; however, it is still a good result for its class.

We also ran the SPECworkstation3 test, which specializes in benchmarks designed for testing all key aspects of the system including CPU, graphics, I/O, and memory bandwidth, where the new Mini workstation showed solid results. It also showed solid results during the SPECviewperf benchmark. We used the newest version of this test, which was updated just last month. Lastly, we looked at the Esri benchmark performance results, which certainly showed the limitations the 4GB GPU might have, but it still outputted expected numbers for its class.

The company’s new HP Z2 Mini G5 is a very interesting piece of technology. It offers users a new set of high-end components that are easily exchangeable due to its toolless access while also supporting rack mounting, as seven Z2 Mini’s can fit across a 5U row and 56 in a standard 24U. With this setup, you can leverage HP ZCentral Remote Boost software and ZCentral Connect IT management software to create a comprehensive (and powerful) solution for a remote workforce, which is more important than ever. Overall, this is a good progressive update to the compact line of professional workstations and will certainly get the job done in most use cases; however, those looking for premium performance and who need something to excel in GPU-heavy applications might want to look at HP’s more higher-end workstations.