Gaming seems to always be increasing. It is no longer a young person’s hobby as people of all ages tend to game, even old fogeys like me.  For the longest time, PC gaming was the dominant market force. If you wanted the game to look the best and have the best controls, PC is where it was at. Consoles opened up a bigger doorway into gaming with some sacrifices, though they have massively improved. Now mobile gaming is taking off to compete with the PC as well. Why? Simple, these new methods tend to be lower costs. This got us thinking, is Intel Iris Xe graphics “good enough” for a budget gaming rig?

Gaming seems to always be increasing. It is no longer a young person’s hobby as people of all ages tend to game, even old fogeys like me.  For the longest time, PC gaming was the dominant market force. If you wanted the game to look the best and have the best controls, PC is where it was at. Consoles opened up a bigger doorway into gaming with some sacrifices, though they have massively improved. Now mobile gaming is taking off to compete with the PC as well. Why? Simple, these new methods tend to be lower costs. This got us thinking, is Intel Iris Xe graphics “good enough” for a budget gaming rig? 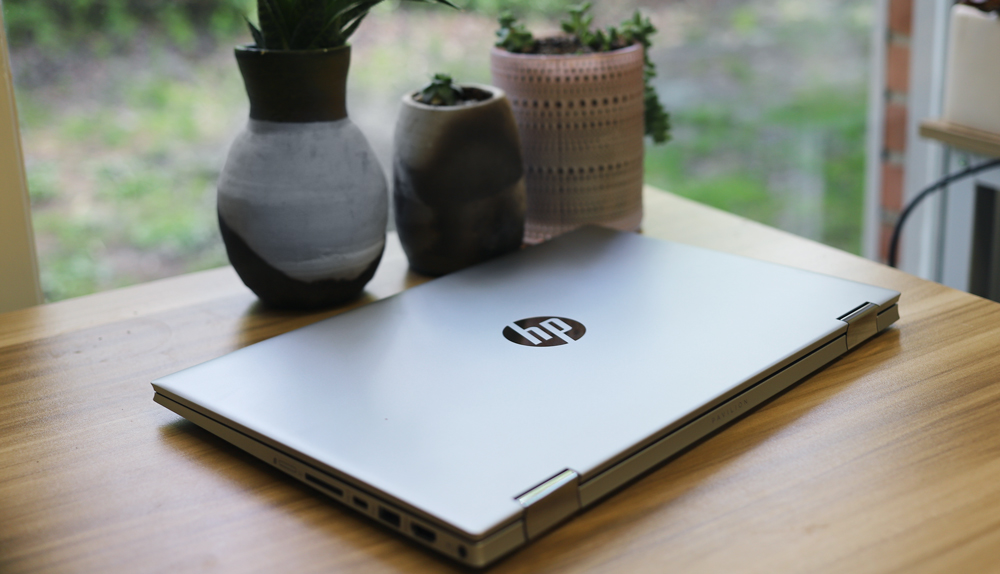 Gamers take a certain amount of pride in their rigs (and for those not in the know, the term rig is typically how they refer to their gaming computer). A quick internet search can show all kinds of elaborately built, designed, and decorated rigs. They tend to spend a lot of money supplying these rigs with the best components to get the most out of gaming.

On the other hand, you have people that are just interested in playing some video games as a hobby and aren’t quite looking to pony up the big bucks at the start. In fact for this project, we were on the hunt for the cheapest gaming rig we could build. With crypto sending GPUs through the roof though, we looked for more modest alternatives. Considering the hype around Intel Iris Xe graphics, we decided to give that a try.

For this use case, we are looking at the HP Pavilion x360 convertible to see if it checks the boxes. Considering it can be picked up for $530 (our config is $699, but has the same graphics), it fits in with the idea of a budget model. The HP Pavilion x360 comes with Windows 10, check. It has an 11th gen Intel Core i5 (1135G7 to be exact), check. It has 8GB of memory, a bit light, but check. 256GB of flash memory comes standard with 16GB of Optane, big check.

What can make or break a gaming rig is the GPU. Here the only option is the Intel Iris Xe. Announced with the Tiger Lake CPUs last year, the Iris Xe is Intel’s latest integrated graphics unit. Intel actually has made some pretty bold claims around the GPU, while keeping it realistic. This is an integrated GPU in a slim notebook it will not run the AAA games at 60 FPS but has no problem with popular games that aren’t as graphics-intensive. Less demanding games have a huge audience, Roblox and Minecraft come to mind.

From the gaming side of things, Intel states that the Iris Xe graphics can feature up to 1080p 60FPS. While this will be ok for several games it can be a slight miss for the more graphic-intensive ones.

Overall, the HP Pavilion x360 has a nice little build. It is about 13” and has a relatively small bezel. The build is aluminum with it being a bit thicker than a standard productivity notebook but not overly so. There is HP branding on top.

On the left side is a USB port and the headphone/microphone port along with some ventilation.

The right side has a USB-A, a USB-C, and HDMI port along with an SD slot and the power connection. 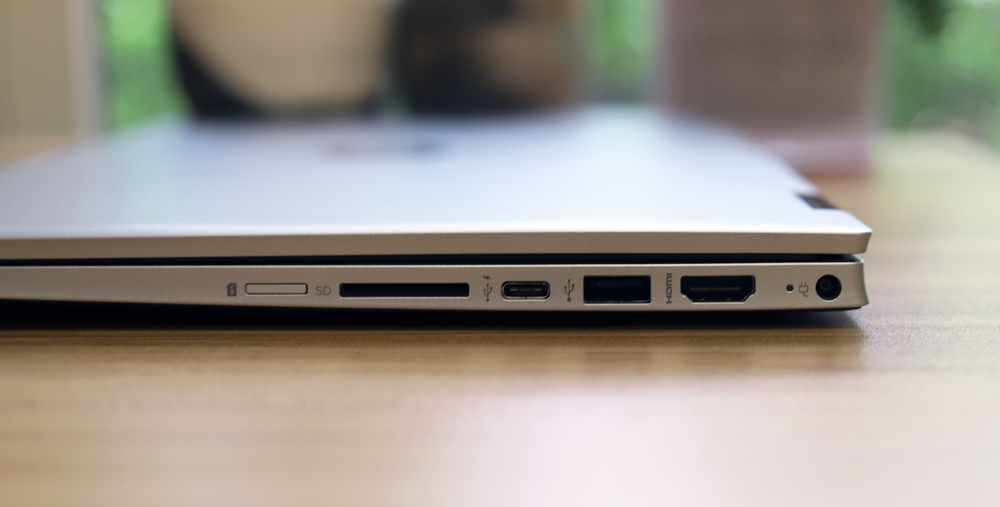 The bottom contains the normal information along with a set of speakers.

Opening it up one immediately is drawn to the screen. It has vibrant colors and is bright, it is also a touchscreen. The keyboard stretches the length of the system with the trackpad dead center. It is easy to use and comfortable to type with. 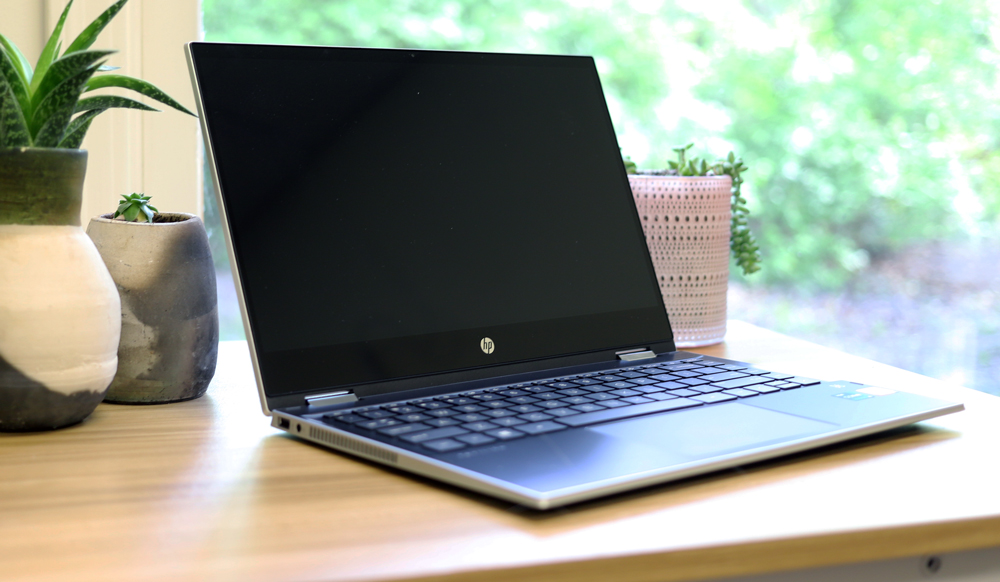 From a strict usability sense, the HP Pavilion x360 runs Windows 10, so that will be comfortable to most. We downloaded a couple of games to get an idea of how different types will play on the system with the Intel Iris Xe, though I lobbied to buy all the games currently played, the higher-ups at StorageReview disagreed.

Rocket League fired right up. Everything seemed to work well, though the screen froze on me once or twice while playing. The graphics came through as well as the gameplay. While I praised the keyboard above, I did so in the manner of a typist. I primary type when I’m on a computer. While I liked the keyboard for typing, I was missing some of the controls in rocket league. This is a combination of not being as familiar with the game and the keyboard being flat to the notebook. Of course, you can control these games with a gaming controller, like the XBOX controller. 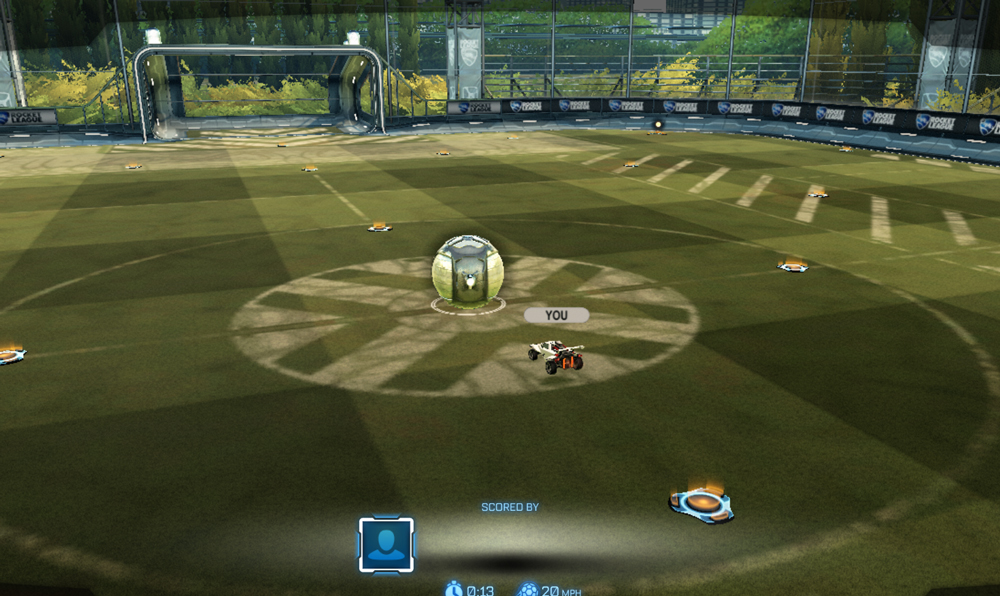 The same could be said about the trackpad. It serves its purpose for the game. The depress part of clicking is near the bottom and I kept missing it. While users can learn this skill, it takes a bit to get used to, and a normal mouse or gaming controller would function better.

The network connection is plenty strong enough to play online with no issue (other than me being bad at it and getting cursed at by 12-year-olds). If this is the caliber of game you are looking to play, you have a winner.

We also ran Fortnite and it was less than fantastic. The game was so choppy that we could barely play it. Waiting to load into a game caused a couple of freeze-ups and crashes. I began to scale down everything I could just to get the game to play. After making it horrendous to look at and hard on the brain, I was able to get a game moving though there were large chunks where it would freeze, and then I would be somewhere else or dead. The gameplay was reminiscent of GoldenEye on the N64. 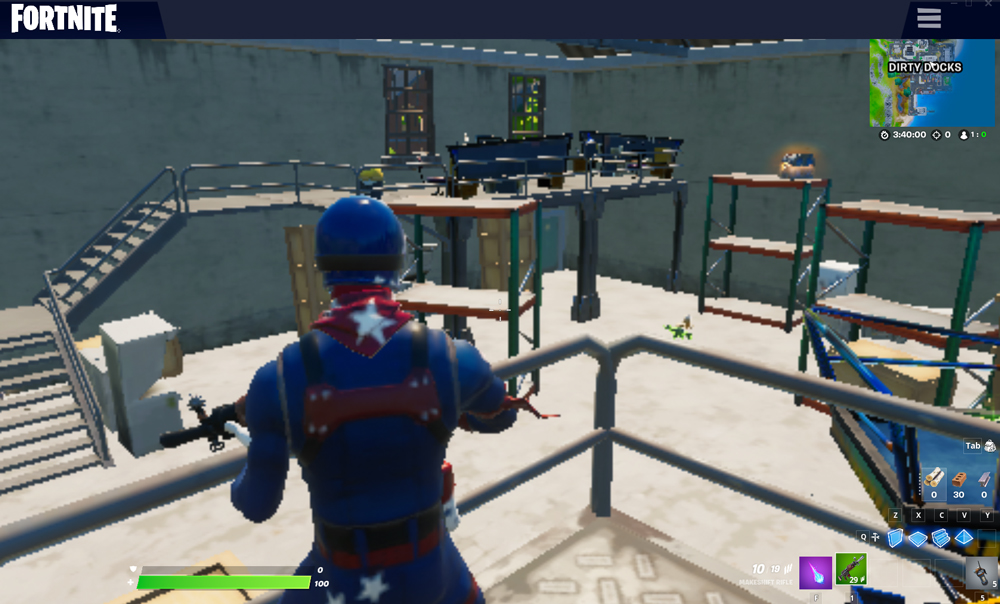 This was the first time I ever played Fortnite with a keyboard. To say to was awkward is an understatement but not much to blame on the keyboard here. The keyboard and trackpad are perfectly fine here for Fortnite where they were more difficult to use for Rocket League. Again, I would buy a separate keyboard and mouse and/or controller if I were to make this a gaming rig.

Another thing to note here is the heat. The notebook put out some serious heat when running Fortnite. While this isn’t the end of the world, it may not be something you want in your lap. Gaming notebooks tend to be a bit louder, but they are also designed with the idea the system will be putting out a ton of heat and designed to move a lot of air. Most budget notebooks aren’t made with the same design considerations. 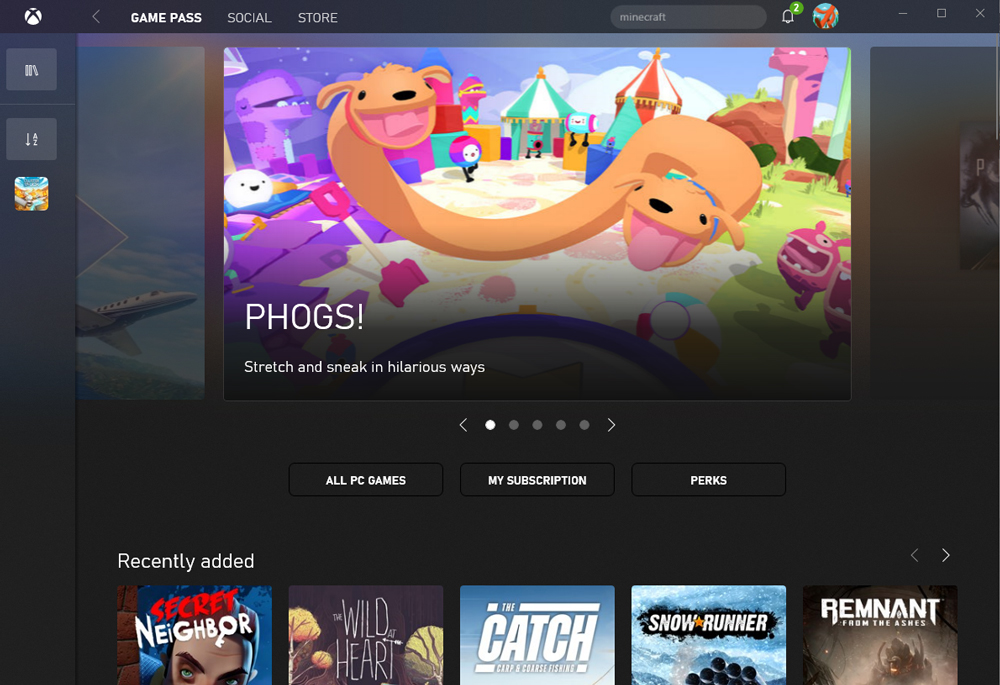 Being a Windows 10 computer, users with an Xbox account will have the ability to play cross-platform games. Going into this knowing the limitations, I choose a simple game, Clustertruck. Here, the gameplay was on point and the controls are much better than on the Xbox Console, which is surprising. 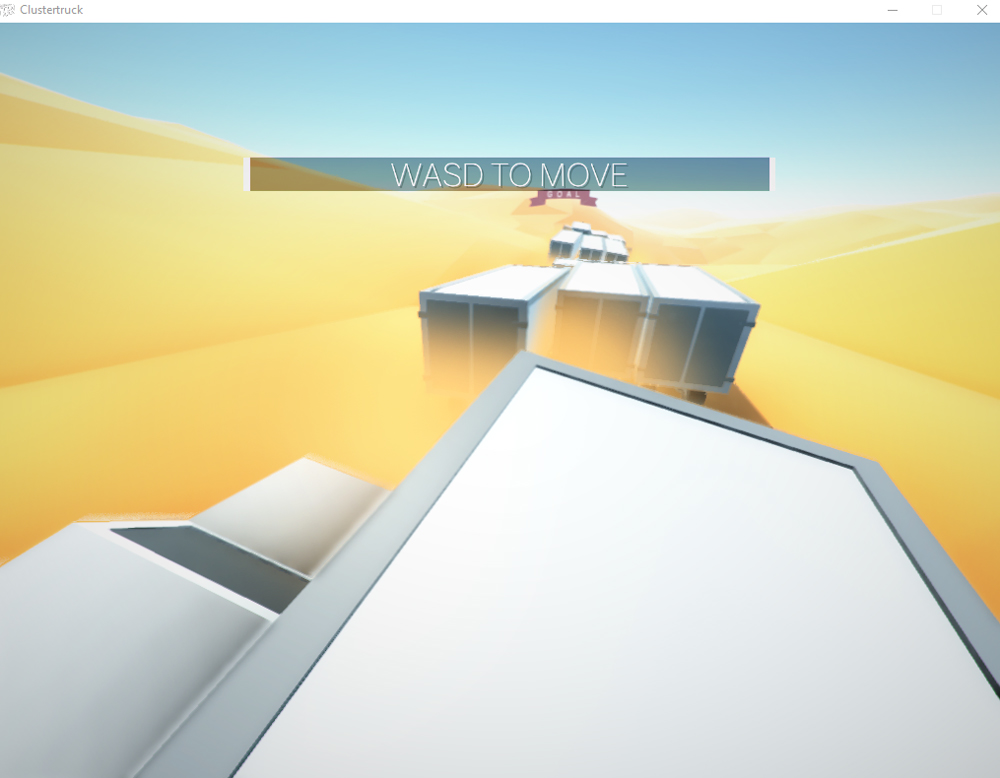 While the big, flashy graphics games grab the headlines, there are some more simple games that are massively popular. Roblox is such a game with over 164 million active players. As with all the other games we tried, there is a bit of a wait to get Roblox up and running. Once you get into a game it takes a few seconds for your appearance to catch up, and then the game plays like normal. 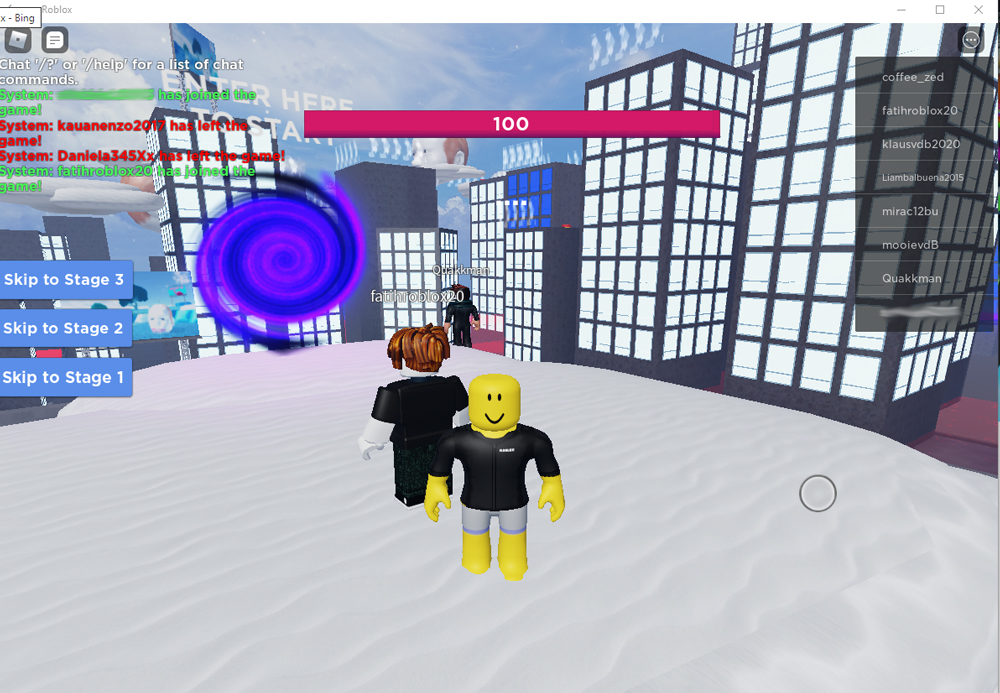 As the pool of gamers increase, there will be a push to increase the number of devices that support gaming. The casual gamer needs something off the shelf that they don’t need to build and something that doesn’t have a huge price tag. The HP Pavilion x360 seems to merge the world of cost-effectiveness with the ability to game. The x360 has an 11th gen Intel Core i5 CPU, 8GB of RAM, 16GB of Optane, and 256GB of flash storage. The system also has an Intel Iris Xe GPU that the company is touting as a GPU that can handle gaming.

Looking at gaming we ran a couple of different games from different classes to see how they feel. For a less taxing game like Rocket League, the HP Pavilion x360 with the Intel Iris Xe played fine, albeit with graphics options turned down. There was a bit of hurky-jerkiness here and there but not enough to ruin the game experience. The keyboard and trackpad are fine for productivity but they made the gameplay a bit difficult. A cheap keyboard and mouse or controller would fix this issue, we just didn’t have one handy.

Fortnite was a different animal altogether. Fortnite is one of the most popular games on multiple systems at the moment and you just won’t be able to play it correctly here. We really had to mess with it to just get it to play and it looked bad and still had issues. In this case, Iris Xe falls down.

We activated the Xbox cross-platform play but you’ll run into the same issue. Simple games play great and easy. The more advanced the game the more issues you’ll have, potentially robbing the games of some of the fun in the highly detailed worlds of Fallout 76 or Gears of War.

Roblox is yet another simple game that you can easily play on the HP Pavilion x360. While massively popular and with tons of options to play, it doesn’t really tax the system very much.

The HP Pavilion x360, with the Intel Iris Xe, is a fine notebook that can be used for a lot of different use cases, gaming it is simply hit/miss. If the type of games you are looking to play are the less taxing types, this will be a great and affordable system. If you want to play the higher-end games, you’ll have to do so in a limited fashion. This has always been the rub with gaming on integrated graphics though, so really not much new ground here.

If you need something for productivity work that will play games like Roblox, this is only $530. It’s a great system for the casual gamer or for kids that want to dabble, but not ready to partake just yet in the large multiplayer games. If you want to be more serious about your gaming, you need to look elsewhere. And that’s okay, HP has systems for that. HIgh-end gaming will always rely on the realm of dedicated graphics. But with Iris Xe, for the casual gaming masses, the gap is closing substantially.

Cheap VMware Homelab with SSD for $155