The HP ZCentral 4R Workstation is a 1U, rackmount system for maximum compute density. The multi-layered name implies both the use of the company’s “Z” performance as well as HP ZCentral Remote Boost, for virtual desktop infrastructure (VDI). The main selling point is that leveraging the company’s remote workstation solution allows power users to work and collaborate from anywhere, without seeing a drop in performance. Applications respond remotely, just as if they were local and native to the user.

The HP ZCentral 4R Workstation is a 1U, rackmount system for maximum compute density. The multi-layered name implies both the use of the company’s “Z” performance as well as HP ZCentral Remote Boost, for virtual desktop infrastructure (VDI). The main selling point is that leveraging the company’s remote workstation solution allows power users to work and collaborate from anywhere, without seeing a drop in performance. Applications respond remotely, just as if they were local and native to the user. 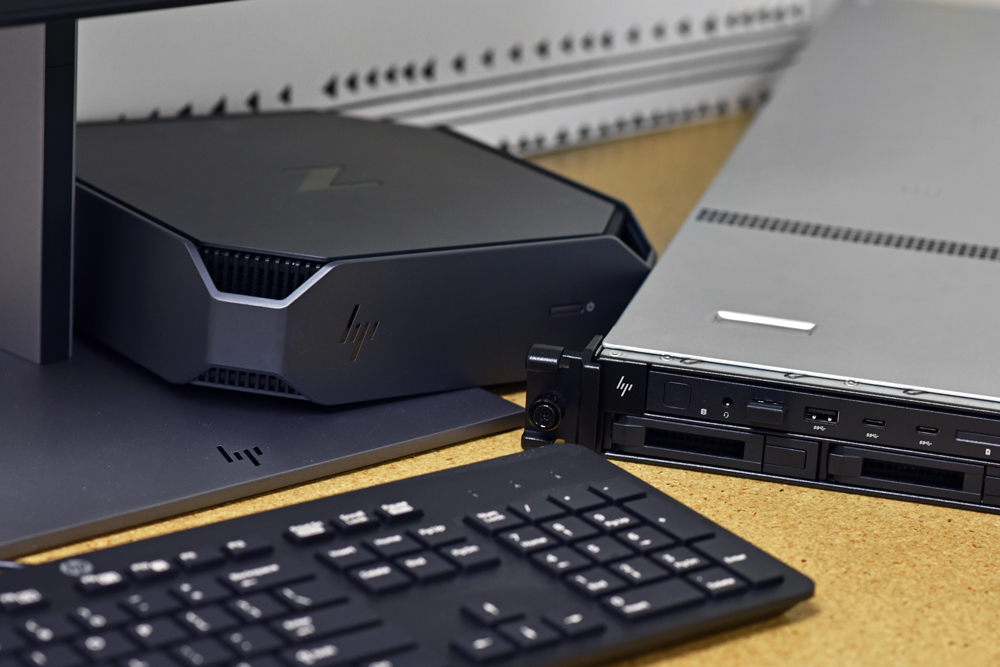 Billed the HP’s most secure workstation, as well as being touted as the most powerful 1U workstation, the HP ZCentral 4R form factor allows for several to be packed into a standard server rack. This allows organizations to densely pack the workstations in, up to 42 in a standard rack. Just like a traditional tower workstation, the 4R has the ability to be easily upgraded, so organizations can start off on the small side and scale up as needed or as new technology or workflow requirements emerge.

From a hardware perspective, the 4R can be outfitted with a CPU from the Intel Xeon W processor family, giving it up to 18-cores. The system houses up to 256GB of DDR4-2933 ECC memory via 4 DIMM slots. From a storage perspective, the 4R supports high-speed PCIe SSD storage in the form of two internal M.2 bays. Two 2.5″ SATA bays on the front come standard, with one 3.5” HDD for extra capacity that can be converted to two 2.5″ bays for more storage flexibility. Ultimately the 4R can support six drives in total, though users could also leverage the PCIe slots for more storage if needed.

For networking, the 4R has both 1GbE and 1/2.5/5/10GbE onboard.  The workstation has USB Type-C connectivity, including the ability to charge, for those that are directly working from the computer. There are a slew of NVIDIA GPUs that are certified to work with the device as well.

Created with product designers, video editors, architects, and other power users in mind, the HP ZCentral 4R Workstation is built around ZCentral Remote Boost. This reduces overall IT costs, increases security, and allows these power users to work wherever they are located. We’ve provided a deep-dive of the Remote Boost solution, which is an excellent way to enable remote users while keeping an organization’s data secure within the data center.

The HP ZCentral 4R Workstation comes with a 3-year limited warranty. Our particular build consists of an Intel Xeon 2295, 64GB of DDR4 RAM, a 1TB M.2 drive for boot, and an NVIDIA Quadro RTX 8000.

The HP ZCentral 4R is a rackmount workstation in a 1U form factor. Though it is small (at least thin) in size, particularly for a workstation, HP has found a way to still pack it with plenty of high-end components for performance. 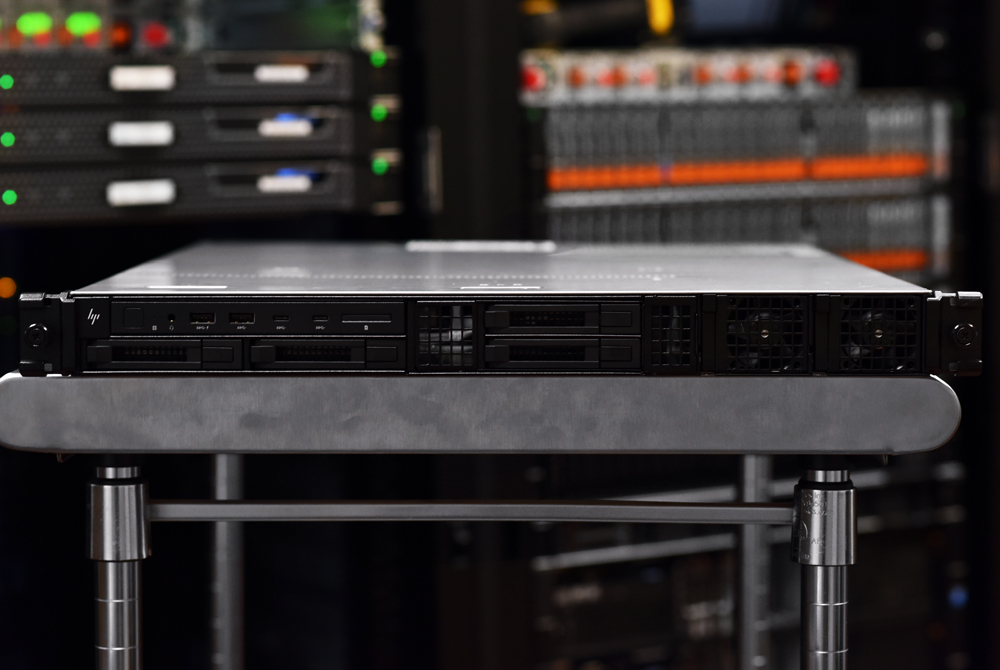 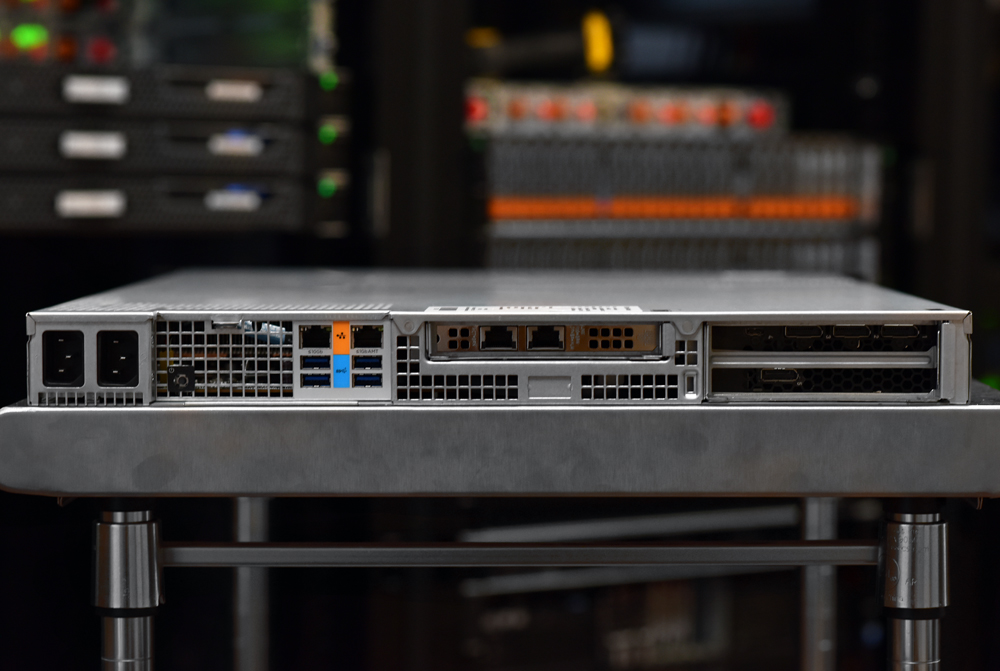 Opening up the workstation we can see the riser slots near the rear and the PSU and drive bays near the front. 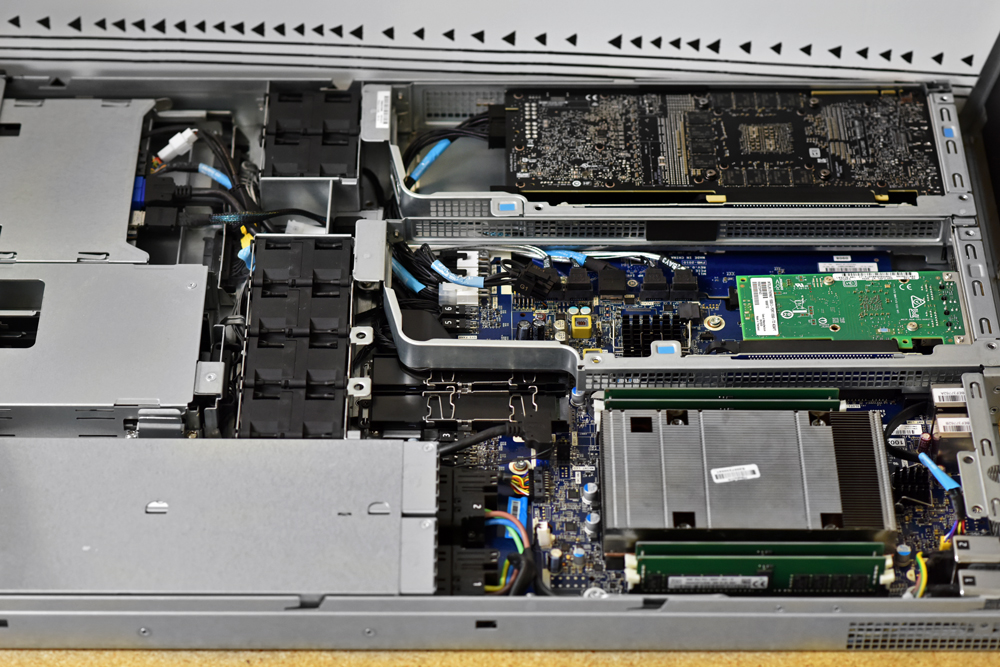 Digging into its guts a bit more we can see the CPU with its massive heat sync and the four DIMM slots. 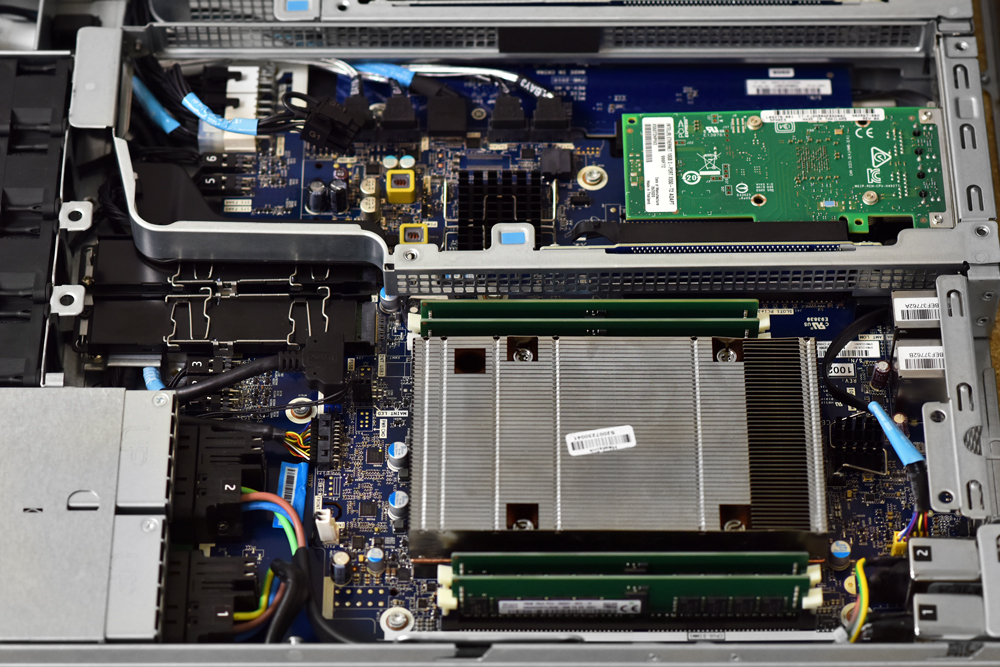 With a bit of tinkering, one can get to the internal M.2 slots for NVMe storage. It only takes opening up the workstation and moving a PCIe riser out of the way. 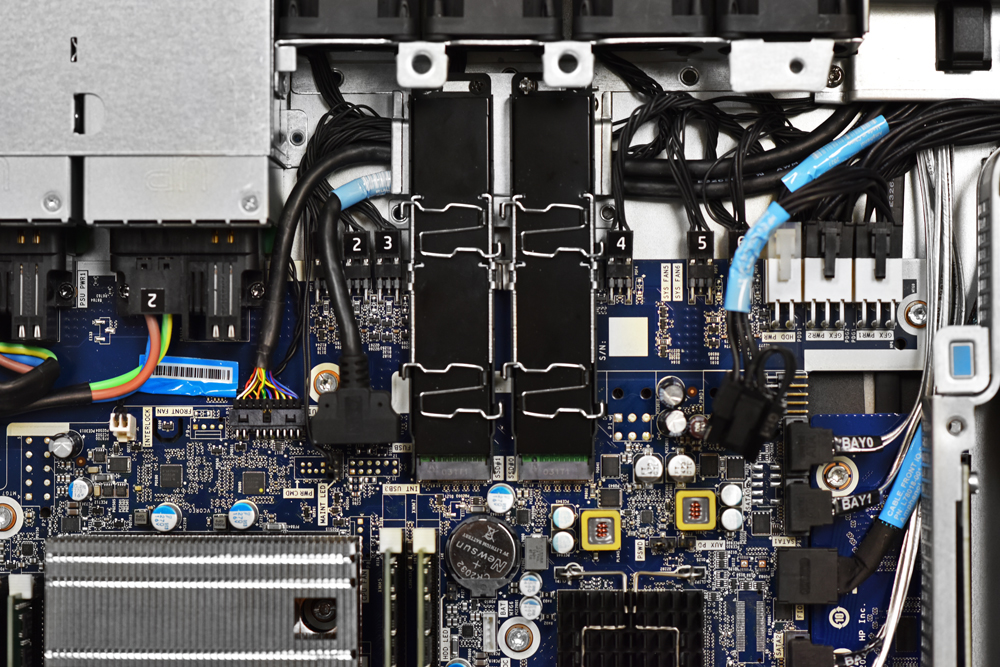 One thing to note here is noise levels. The HP 4R is a fairly loud platform, in both idle and load states; as such it’s not something you’d be running at your desk under the monitor. At idle the platform was probably louder than under load but from a different type of noise. The fans at low speed hit a resonance that whined considerably. When we were running the benchmarks the fans were making a lot of noise, but almost more tolerable than idle. Not awful in the sense where we thought something was wrong, but more in line with not something we would want to listen to for long. Generally, this workstation would be in a rack and out of sight so it is most likely not a major concern. But for those considering keeping this system within earshot, that may not be a great idea.

To see what the HP ZCentral 4R can do, we put it through a series of resource-intensive tests when outfitted with an Intel Xeon 2295, 64GB of DDR4 RAM, a 1TB M.2 drive for boot, and an NVIDIA Quadro RTX 8000. 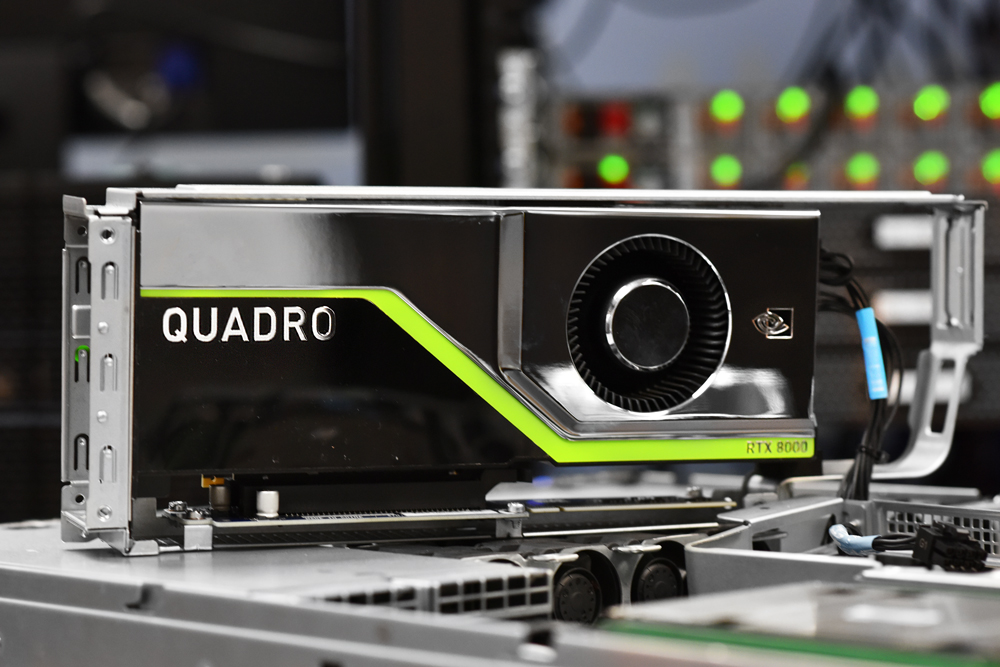 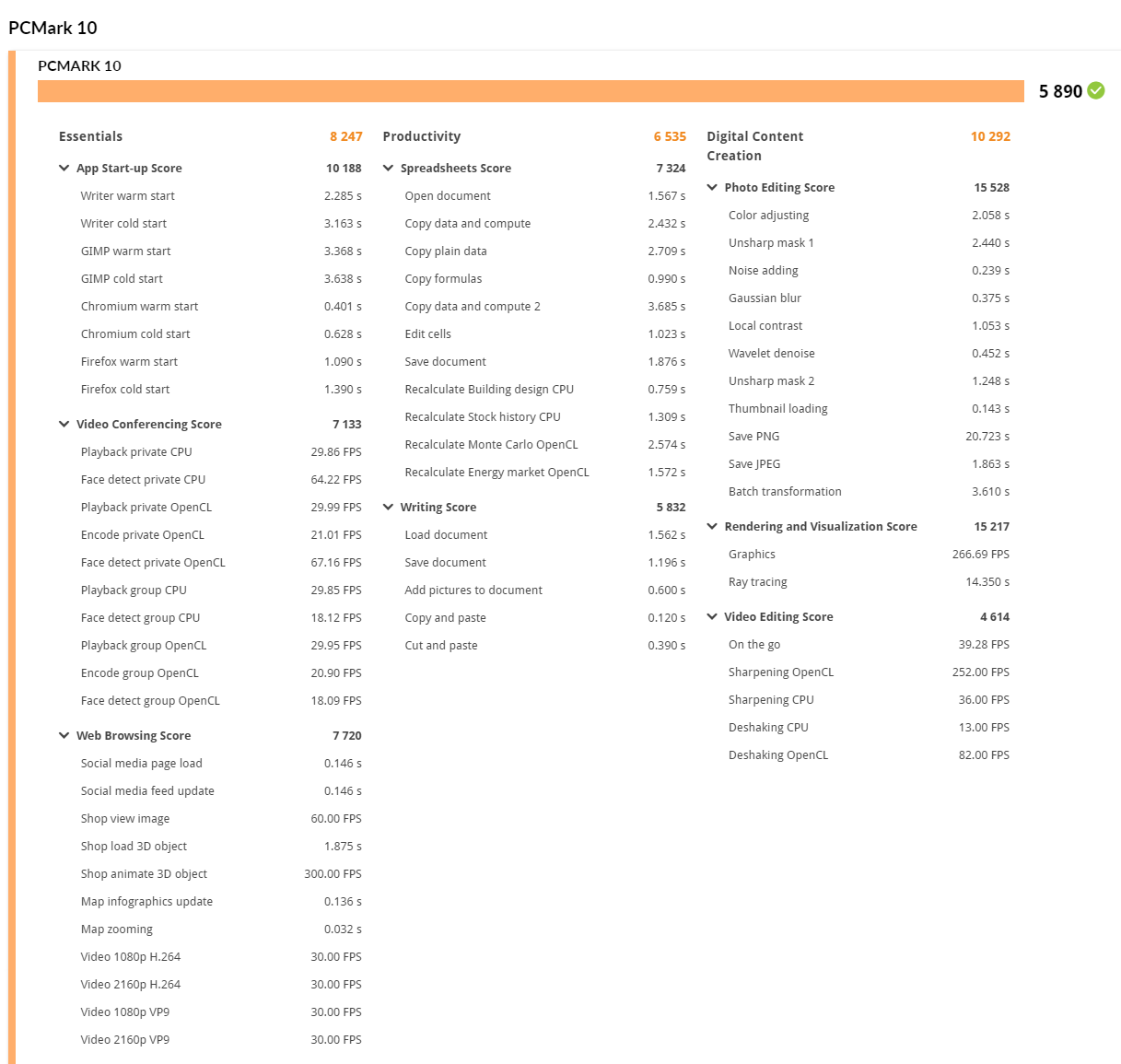 Please note that the HP ZCentral 4R is one of the few workstations we tested that used this new version of SPECviewperf (the first being the HP Z2 mini G5, which we will compare it to). This benchmark went through some major updates on October 14, 2020:

For this benchmark, the HP ZCentral 4R showed a fairly dramatic lead over the Mini G5 workstation. While not exactly apples to apples, the point is to show the gravitas of the difference between the two systems.

Though we had an error on Energy we couldn’t shake, overall the ZCentral 4R again outperformed the Z2 mini by leaps and bounds as expected.

The HP ZCentral 4R is a 1U, rackmount workstation built for power users, wherever they happen to be. The workstation comes with high-end hardware such as the Intel Xeon W CPU family, up to 256GB of RAM, and onboard 10GbE connectivity. Our build also tossed in an extra NIC and NVIDIA RTX 8000 GPU. While it can be leveraged by a user locally, the 4R is designed to be racked in the data center and leveraged remotely through HP’s ZCentral Remote Boost or other software.

Our graphics-based testing showed the HP ZCentral 4R had no trouble shining in SPECviewperf 2020 and SPECworkstation 3. ArcGIS also had a strong showing from the rackmount workstation. While we compared the 4R next to the G5 Mini, that’s only a reference point just to show the scale of what the 4R is capable of. Obviously, no one be is cross-shopping the two, but we happened to have a similar set of performance benchmarks on hand.

Companies looking for the most powerful way to roll out HP ZCentral Remote Boost need to look no further than the HP ZCentral 4R Workstation. With today’s workforce more distributed than ever, this solution provides the balance between the power end users require and the manageability and security organizations need.

HP Workstations – Get an extra 10% off of configurable HP workstations, code SMB10