Back in March, AMD released their latest generation of AMD EPYC 7003 processors. The same day several vendors were quick to follow suit, including HPE who launched several server updates. Headlining the updated servers announced is the HPE ProLiant DL365 Gen10 Plus, a 1U dual-processor system that’s primed to deliver class-leading compute strength. The DL365 Gen10 Plus can deliver 128 cores, 4TB of DRAM, and two GPUs as well. Compute-hungry applications surely will rejoice at the prospect of harnessing this kind of dense server power.

Back in March, AMD released their latest generation of AMD EPYC 7003 processors. The same day several vendors were quick to follow suit, including HPE who launched several server updates. Headlining the updated servers announced is the HPE ProLiant DL365 Gen10 Plus, a 1U dual-processor system that’s primed to deliver class-leading compute strength. The DL365 Gen10 Plus can deliver 128 cores, 4TB of DRAM, and two GPUs as well. Compute-hungry applications surely will rejoice at the prospect of harnessing this kind of dense server power. 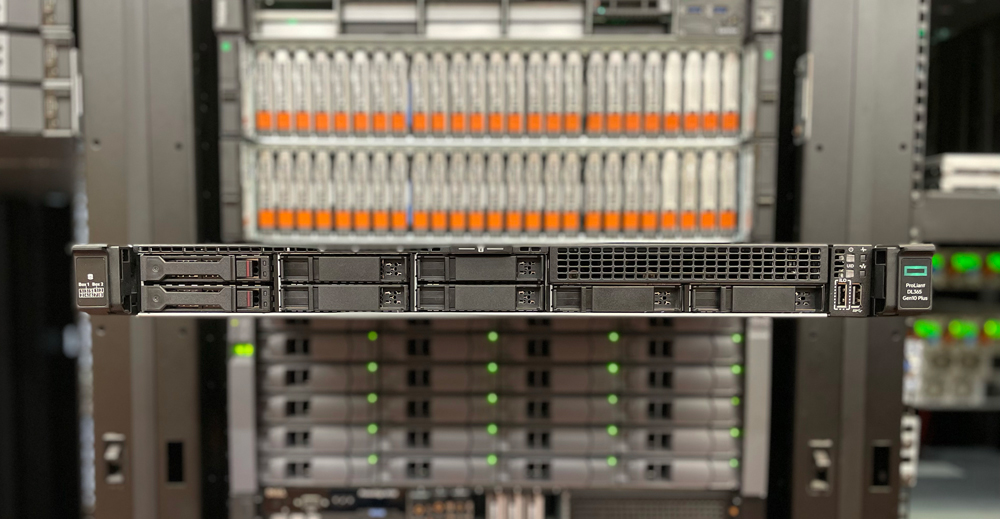 Where the HPE ProLiant DL365 Gen10 Plus Sits

The DL365 sits in a spot where it doesn’t bring as much storage as the DL345 or DL385, but houses two CPUs bringing much more potential performance than the DL325’s. 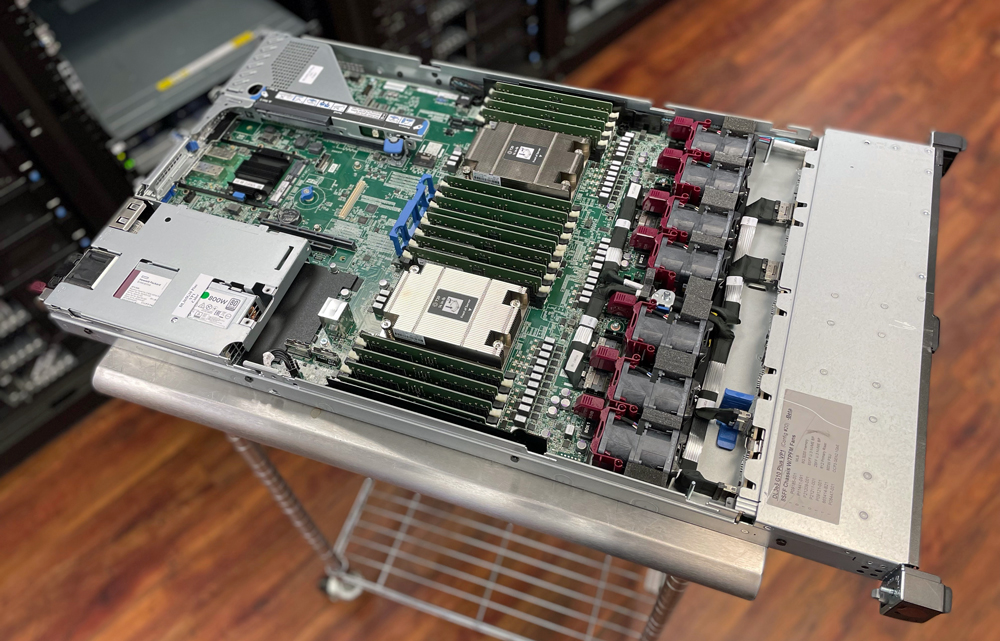 Looking at storage, there are 8 SFF (2.5-inch) hot-swap bays in the front though two more can be added bringing a total of 153.6TB (10 drives x 15.36TB) of NVMe storage in a 1U footprint. The 7003 CPUs support PCIe Gen4 throughout. There are also two slots for GPUs, a full-height, 3/4-length slot, and a full-height, full-length slot.

HPE has touted its security for some time and the new batch of servers is no exception. The new ProLiants are tied into the company’s silicon root of trust. Additionally, they support AMD Secure Processor, a dedicated security processor embedded in the AMD EPYC system on a chip (SoC). Every step and component is monitored on the supply chain for added security. If a server is compromised, HPE says they know quickly and can take action including refusing it the ability to boot. The server has automated recovery that includes the restoration of validated firmware. This gets the server back into operation in a timely manner.

For remote management, the HPE ProLiant DL365 Gen10 Plus offers several options including the HPE Integrated Lights-Out (iLO). And the new server is part of the company’s as-a-Service suite including in HPE GreenLake.

Overall, the HPE ProLiant DL365 Gen10 Plus looks more or less like the rest of the ProLiant line over the last few years. Across the front of the device are the eight, 2.5” drive bays. The 8 bays in this pre-production build are Gen4 U.3 NVMe bays, which did present some SSD compatibility issues. Full production builds won’t have this same issue that we had during our initial testing of the beta platform.

Our normal assortment of U.2 drives wouldn’t work, the drives simply weren’t seen by the system. As such, our performance testing was limited to the two supplied Samsung SSDs, which incidentally are marked U.3 only. There won’t be a problem with SSDs bought from HPE working in this server, but it should be noted that non-qualified drives may have issues.

On the right are all the important stuff like the indicator LEDs, a USB 3.1 port, the power/standby button, the UID button, and an iLO service port. There is a slot for an optional optical media bay or more drive bays can be added here.

Flipping it around to the back, the PSUs are on the right. Along the top are the PCIe Gen4 slots. Along the bottom from left to right is another iLO port, two USB 3.1 ports, a UID LED, an OCP 3.0 slot, and a VGA port.

Opening up the server, we can see the two CPUs in the middle surrounded by the 32 DIMM slots. 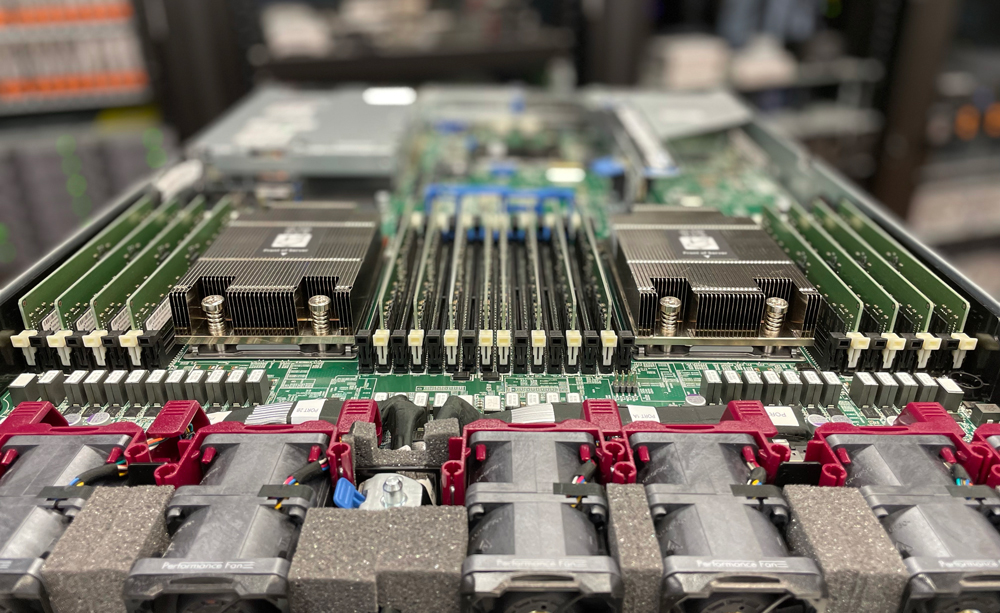 While the rest of the inside is fairly typical server guts, there is a chassis intrusion detection connector for added safety. 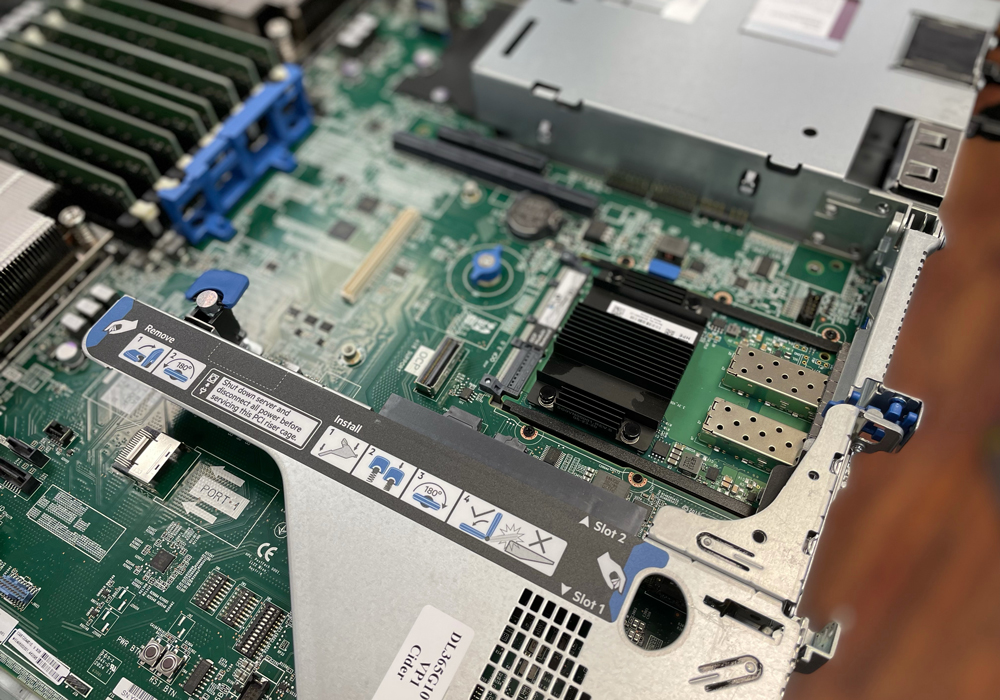 Each SQL Server VM is configured with two vDisks: 100GB volume for boot and a 500GB volume for the database and log files. From a system resource perspective, we configured each VM with 16 vCPUs, 60GB of DRAM and leveraged the LSI Logic SAS SCSI controller.

For SQL Server average latency, the HPE ProLiant DL365 Gen10 Plus had an aggregate latency of 1.5ms with individual VMs ranging from 1ms to 2ms. We’ve measured higher from this class of CPU, although we’ve used more SSDs for backend storage to drive the I/O.

With the Sysbench OLTP, we recorded an aggregate score of 16,817 TPS with individual VMs running from 1988 TPS to 2210 TPS. We left a lot of CPU on the table with the limited storage configuration, although it goes to show just how little Gen4 NVMe SSD you need to get the huge potential out of these next-gen platforms.

With Sysbench average latency, the server had an aggregate of 15.26ms with individual VMs ranging from 14.47ms to 16.1ms.

When it comes to benchmarking storage arrays, application testing is best, and synthetic testing comes in second place. While not a perfect representation of actual workloads, synthetic tests do help to baseline storage devices with a repeatability factor that makes it easy to do apples-to-apples comparisons between competing solutions.

Switching over to our 64K sequential workloads, in read we saw the HPE server peak at roughly 113K IOPS or 7.1GB/s at 560µs before dropping off a bit.

VDI FC Initial Login saw a peak of 73,535 IOPS at a latency of 765µs before dropping off some.

For VDI LC Initial Login the HPE server had a peak performance of 54,548 IOPS and a latency of 234µs.

Finally, with VDI LC Monday Login we saw a peak of about 53,250 IOPS and 450µs before a drop-off in performance.

The HPE ProLiant DL365 Gen10 Plus is a 1U server that features two AMD EPYC 7003 processors. This can bring up to 128 cores and up to 4TB of 3200MHz RAM to this little server. While it is not made to be storage heavy, users can put up to 153TB of NVMe storage into its tiny footprint. The DL365 comes with some HPE specific benefits include the silicon root of trust and other security measures. HPE iLO management to monitor the server status and help relieve issues. And support for HPE GreenLake allowing this server to fall under the company’s larger as-a-Service umbrella.

For performance, we ran our Application Workload Analysis including SQL Server latency and Sysbench. We also ran our VDBench tests. In SQL Server latency, the HPE ProLiant DL365 Gen10 Plus had an aggregate average latency of 1.5ms. In Sysbench we saw aggregate scores of 16,817 TPS, 15.26ms in average latency, and just 27.16ms in worst-case scenario latency. Both of these workloads would have measured much higher, although we had a more limited set of SSDs to test with given the U.3 SSD backplane in the system.

The HPE ProLiant DL365 Gen10 Plus sits in the middle of the newly announced AMD-based servers from HPE. Being a 1U it can’t bring as much storage (though you can still pack in a reasonable 153TB), it does come with AMD EPYC 7003 CPUs that can deliver 128 cores, 4TB of RAM and GPU support. This packs plenty of dense compute performance for a wide range of workloads.