Samsung launched almost twenty iterations of their PCIe Gen4 enterprise SSD family in the fall of 2019. The PM1733 and PM1735 were designed to fully take advantage of the throughput Gen4 offers. Now that server vendors are including Gen4 ports across their AMD and Intel-based server offerings, these SSDs are finally coming to market in volume. The PM1733 is a single drive write per day model, while the PM1735 offers three drive writes per day. In this review, we take a look at an HPE PM1735 variant in a 3.2TB capacity (HPE P16499-B21).

Samsung launched almost twenty iterations of their PCIe Gen4 enterprise SSD family in the fall of 2019. The PM1733 and PM1735 were designed to fully take advantage of the throughput Gen4 offers. Now that server vendors are including Gen4 ports across their AMD and Intel-based server offerings, these SSDs are finally coming to market in volume. The PM1733 is a single drive write per day model, while the PM1735 offers three drive writes per day. In this review, we take a look at an HPE PM1735 variant in a 3.2TB capacity (HPE P16499-B21). 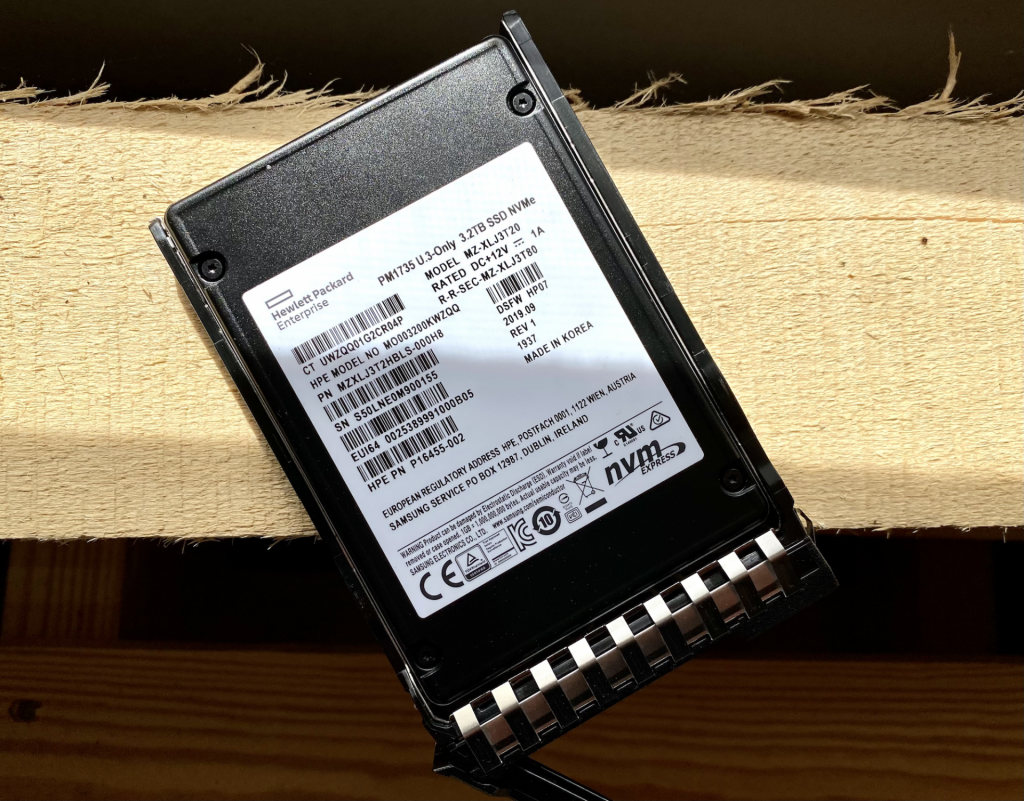 It should also be noted that with most server vendors, SSDs will have firmware specific to the vendor, HPE for instance in this case. These drives may also not be generally available in retail as they’re targeted toward OEMs. Samsung offers the 1.3 DWPD PM9A3 for retail. The PM9A3 is a single port datacenter drive offered in a range of form factors including M.2, U.2, E1.L, and E1.S. 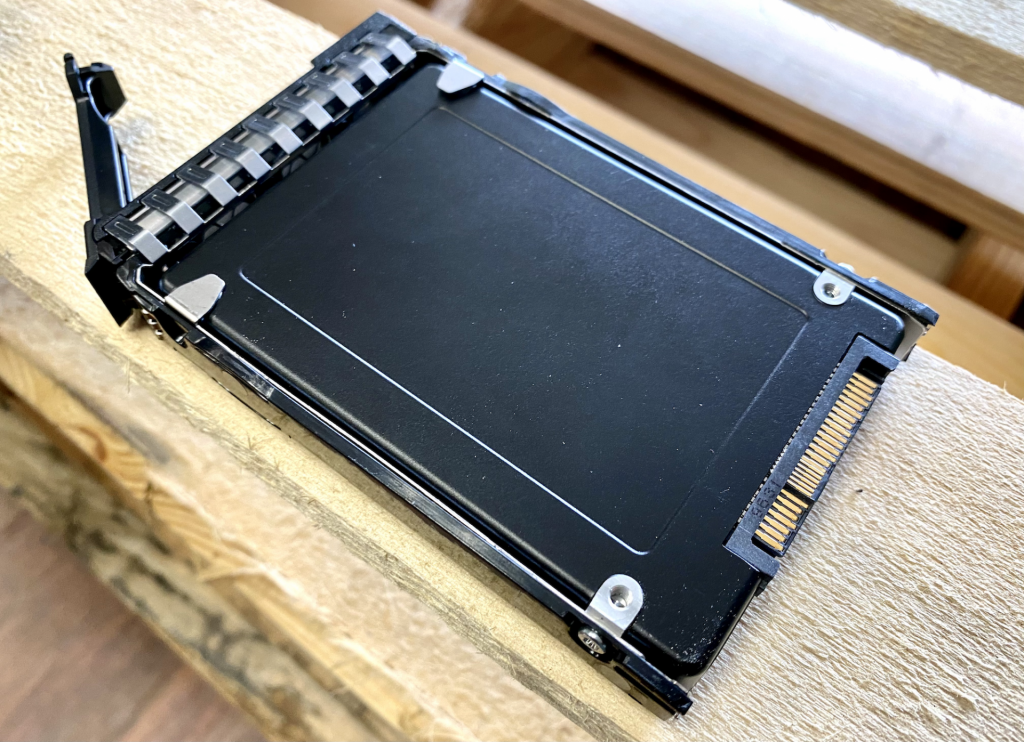 In order to understand the performance characteristics of enterprise storage devices, it is essential to model the infrastructure and the application workloads found in live production environments. Our benchmarks for the HPE/Samsung PM1735 include the MySQL OLTP performance via SysBench and Microsoft SQL Server OLTP performance with a simulated TCP-C workload. For our application workloads, each comparable drive will be running 4 identically configured VMs. With the PM1735 being a U.3-ONLY variant, we tested it on the HPE DL365 Gen10 Plus while the other models were on our Lenovo ThinkSystem SR635.

For our SQL Server transactional benchmark, the PM1735 placed just behind the Kioxia drive with 12,625.56 TPS.

Looking at our Sysbench transactional benchmark, the PM1735 had 7,869.21 TPS, placing it well back of the Kioxia drives.

With Sysbench average latency the PM1735 posted 16.26ms, which was just behind the two Kioxia drives.

For our worst-case scenario latency (99th percentile) the PM1735 showed 28.90ms, placing it between the Kioxia CM6 and CD6 drives.

All of these tests leverage the common vdBench workload generator, with a scripting engine to automate and capture results over a large compute testing cluster. This allows us to repeat the same workloads across a wide range of storage devices, including flash arrays and individual storage devices. Our testing process for these benchmarks fills the entire drive surface with data, then partitions a drive section equal to 25% of the drive capacity to simulate how the drive might respond to application workloads. This is different than full entropy tests which use 100% of the drive and takes them into steady state. As a result, these figures will reflect higher-sustained write speeds.

In our first VDBench Workload Analysis, Random 4K Read, the PM1735 showed weak performance compared to the Kioxia drives, peaking at just 631,959,288 IOPS at a latency of 800.7µs under a high load. The normal load showed just over 400K and 319.6ms in peak performance. This puts the drive well behind the leaders.

Next, we switched over to our VDI clone test, Full and Linked. For VDI Full Clone, the Samsung drive placed well back in all categories. First up is (FC) Boot, where the PM1735 peaked at 110,816 IOPS and a latency of 313.4µs.

For VDI FC Initial Login the PM1735 remained way behind the Kioxia drives with a peak performance of just 51,903 IOPS with a latency of 571.8µs (before taking another spike in performance).

Our VDI FC Monday Login benchmark saw the PM1735 get slightly closer to the Koxia drives with a peak performance of 68,023 IOPS with a latency of 230µs.

VDI LC Initial Login, the PM1735 actually finished well ahead of the Kioxia drives with a peak of just under 50K IOPS at a latency of 159.4µs before dropping off some.

The Samsung PM1735 is a PCIe Gen4 SSD designed for demanding enterprise workloads. With its 3 DWPD endurance and performance profile of 8GB/s reads and 3.8GB/s for writes, on paper, the drive seems well-suited for the job. That’s a large reason why HPE is including it with their latest Gen4-enabled servers under the HPE P16499-B21 part number. Incidentally, as server vendors multi-source their components, that part number also includes the KIOXIA CM6 and Intel P4610 in the “high-performance mixed-use SFF” category. 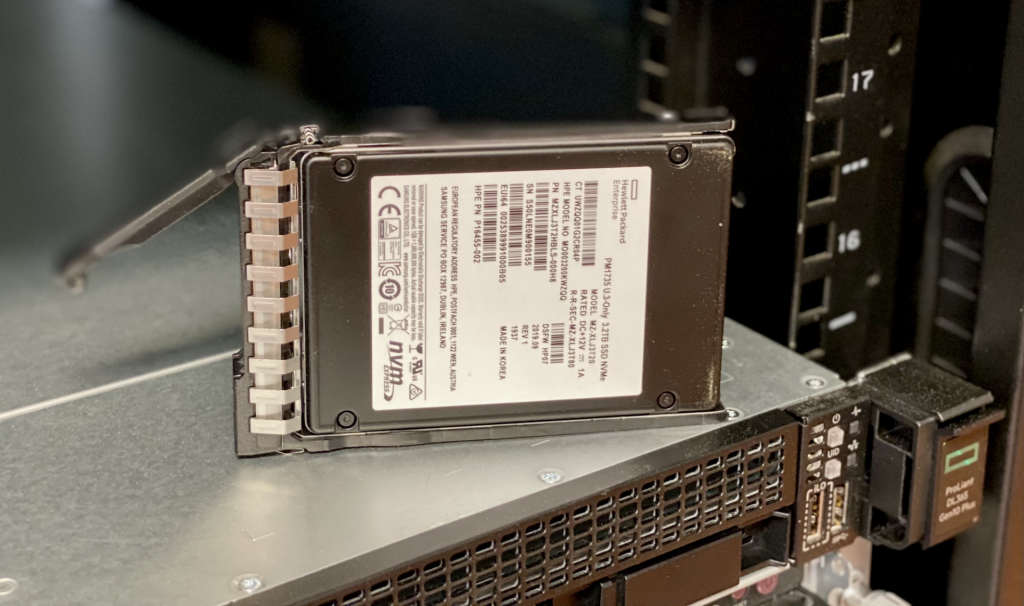 For performance, we put the new Samsung drive through our usual gauntlet of Application Workload Analysis and VDBench. In addition, like the KIOXIA drive reviews we previously published, we added in a higher load test on VDBench to stress it a bit further since they are designed to handle it.

For our Application Workload Analysis tests, we ran SQL Server and Sysbench. With SQL Server the PM1735 had a TPS and average latency of 12,625.56 and 11.25ms, both of which were near the bottom of the leaderboard. With Sysbench, it posted 7,869.21 TPS (which was well behind the KIOXIA drives), 16.26ms average latency, and 28.90ms in our worst-case scenario latency.

Ultimately the move to Gen4 has given enterprise SSD vendors a lot of performance opportunities. While the PM1735 did reasonably well in a few spots, it turned in a pretty uneven performance profile. Real-world use cases may not notice though, depending on what hardware they’re coming from. This is especially true if the workloads are database-driven, where the drive did okay. But given the choice of drives on HPE platforms, the CM6 is clearly a better option.