The Seagate FireCuda Gaming Hub is an external storage device meant to add a substantial amount of space for your games and other software. This hefty external drive also allows users to create (or add to) a colorful atmosphere with its customizable RGB LED lighting that runs along the front of the drive, which is often an important aesthetic feature for this demographic. The FireCuda Gaming Hub comes in capacities of 8TB and 16TB.

The Seagate FireCuda Gaming Hub is an external storage device meant to add a substantial amount of space for your games and other software. This hefty external drive also allows users to create (or add to) a colorful atmosphere with its customizable RGB LED lighting that runs along the front of the drive, which is often an important aesthetic feature for this demographic. The FireCuda Gaming Hub comes in capacities of 8TB and 16TB.

Gamers nowadays have massive libraries due to the constant sales (on Steam, Epic store, Humble Bundle, etc.), availability, and the overwhelming selection from Indie developers, the latter of which has exponentially grown over the past decade. Impulse buying seems to be the norm. And, if you’re like me, you have dozens of these games installed on your PC at one time, including those that you probably won’t even play.  So, supplemental external drives of this size definitely come in handy. 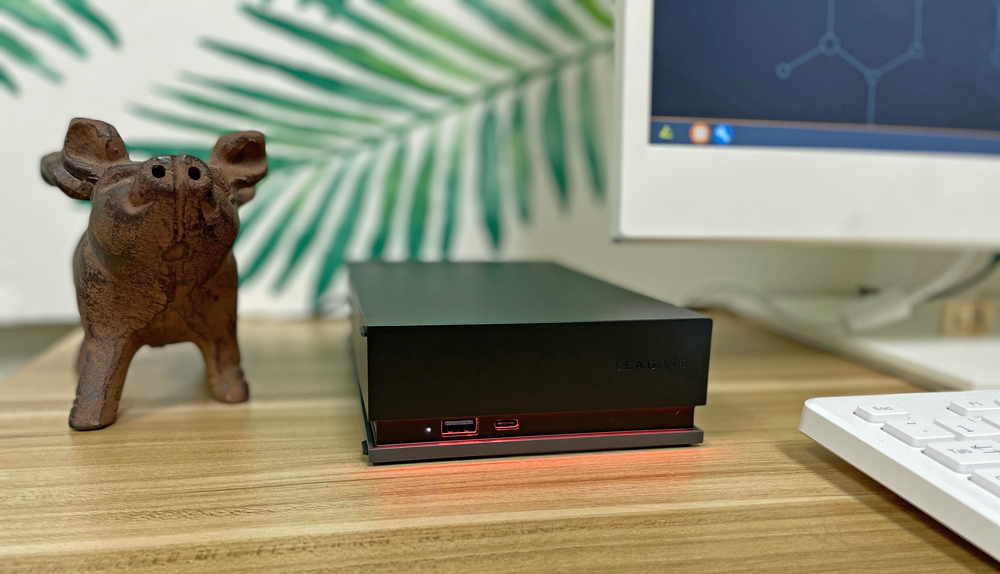 That said, Seagate has not posted any quoted performance numbers, so be sure to pay extra attention to the performance section so you can determine whether or not it will be able to handle your use case.

The Seagate Expansion is one of the company’s other external desktop drives and shares a lot of the same features as the FireCuda Gaming Hub. Both are similar in size (though the Gaming Hub is slightly bigger), support USB 3.0 connectivity, and have a maximum capacity of up to 16TB. Both also include Seagate’s Rescue Data Recovery Services (which helps users recover their data due to an unexpected mechanical, accidental, or natural disaster) and warranty. However, they differ in some pretty important areas.

While they both offer the same maximum storage, the Seagate Expansion is available in a much wider variety of capacity models (as small as 4TB), allowing it to satisfy a broader range of needs. That said, the Gaming Hub is equipped with dual USB-C and USB-A ports, which give users a few extra options to power or charge their peripherals. They are also front-facing, so users will have easy access to these ports.

The most obvious difference is the Gaming Hub’s RGB LED lighting features, which certainly cater to the gaming demographic. This can be managed using Seagate’s drive management software, Toolkit. It’s highly customizable with a range of different RGB colors and light patterns.

As far as pricing goes, the Gaming Hub is slightly more expensive: The 16TB and 8TB models go for roughly $535 and $295, respectively, while the Seagate Expansion is currently priced at $530 and $255 for the same capacities. 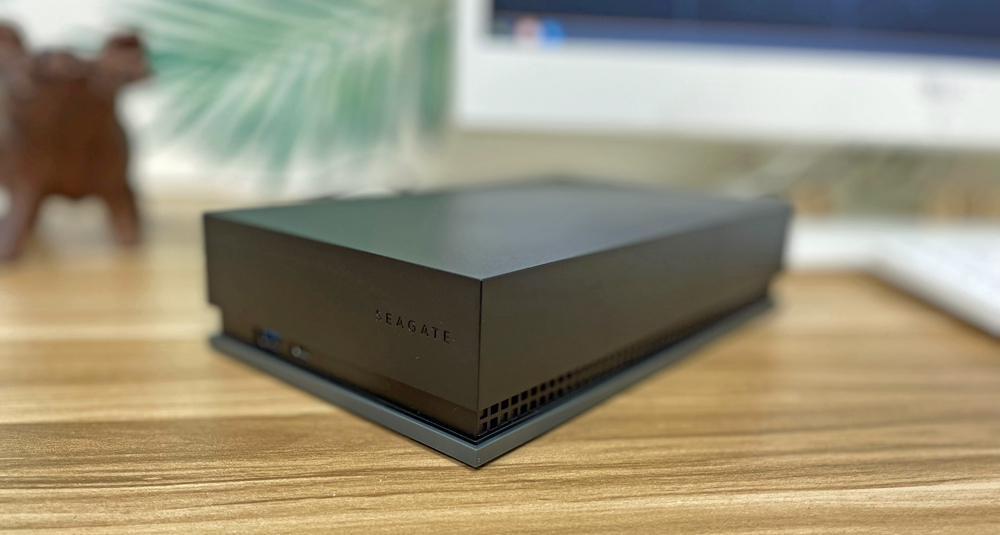 Though the design looks nice, it features a plastic build. It would have been nice of Seagate to go all out and use a more premium material. Nonetheless, it features a sizable groove that runs along the perimeter of the hub and the sides have ventilation to help exhaust the heat. Underneath the hub is the usual sticker with all the information about the drive.

The dual USB-C and USB-A ports are located on the front of the external drive, which means easy access to the peripherals you plug into it. 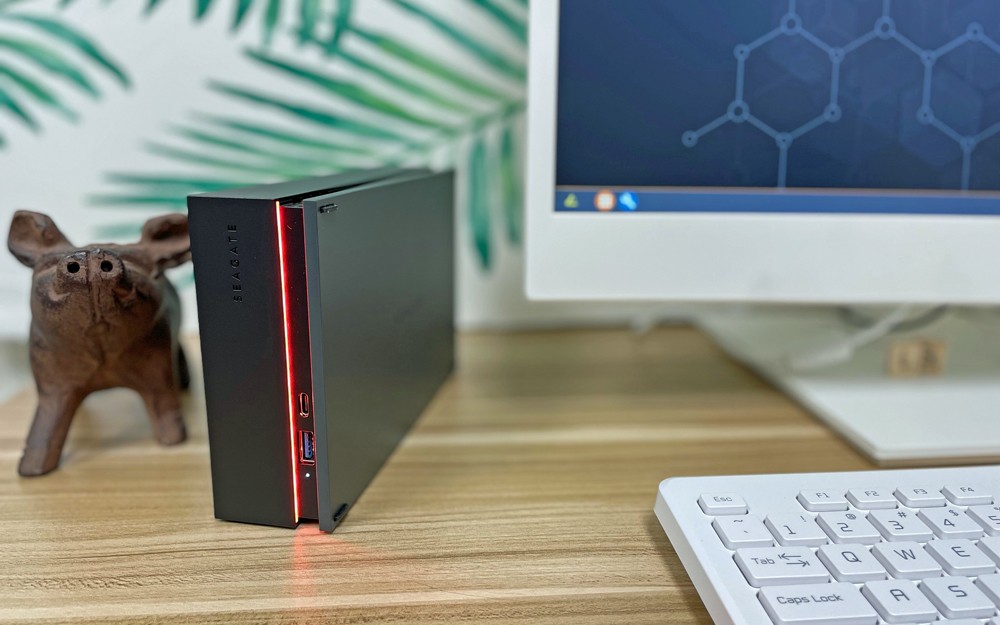 The FireCuda Gaming Hub uses a simple A/C adaptor to power the device while using a USB micro-B port to connect to the host computer. It’s a bit unfortunate that Seagate decided to go with an old-school USB 3.0 connection (not USB-C) because performance will be limited and won’t be producing a lot of bandwidth to connected devices. It’s also not as neat and tidy to plug into a new notebook. Regardless, all you need to do is plug it in and you’re good to go.

The RGB lights are located on the front of the Gaming Hub. They are fully customizable including pattern control, and Seagate indicates you can sync up all your FireCuda RGB products via the company’s free Toolkit software. It also supports Razer Chroma (an RGB lighting ecosystem for gaming devices), so those really into the RGB scene can further sync all their Chroma-enabled peripherals.

To gauge the performance of the Seagate FireCuda Gaming Hub, we tested it via Blackmagic software and IOMeter, both on a Lenovo P520.

We compared it to the following drives in IOmeter: 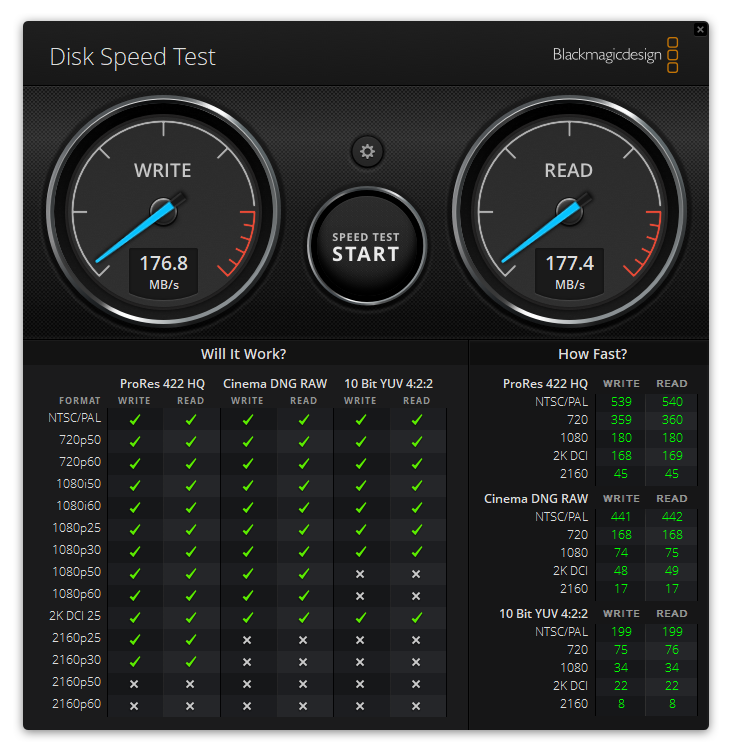 Available in two sizeable capacities of 8TB and 16TB, the FireCuda Gaming Hub is an external storage device meant to offload a good amount of storage from a PC, something that is often needed for gamers.  While the market is already flooded with similar storage hubs, its customizable RGB LED lighting and its front-facing USB ports for powering and charging peripherals add a bit of uniqueness to Seagate’s Gaming Hub. The former allows the device to add a bit of atmosphere to your gaming setup, and can certainly integrate easily into existing RGB ecosystems due to its support for Razer Chroma.

While we don’t recommend this device for the hardcore gaming demographic as a landing spot for games themselves, it is a perfect platform for backups, movies, photos, and other bulk storage items. The FireCuda Gaming Hub might also appeal to anyone who wants an external storage drive with a bit of RGB flare or need a few extra, easy-accessible charging ports. In addition, though it certainly works as a viable non-Cloud backup solution, there are other less expensive and better-performing options out there minus the RGB lights.