Cheap VMware Homelab with SSD for $155

We’ve been looking for value lately, whether it’s the sub $200 TrueNAS platform that included both SSD boot and 10GbE. Or the budget PC for home use that had an SSD and Windows 10 for under $150. The problem though when it comes to Homelabbing is that these value options, or even something nicer like Lenovo Nano‘s,  don’t offer a supported NIC for ESXi. ESXi simply won’t play nicely with a lot of NICs and barfs on install. Considering we had already given away the prior budget platform, we sought out the bargain bin at eBay to see what we could rum up that would please VMware’s compatibility list and offer a bit more juice than the prior budget system.

We’ve been looking for value lately, whether it’s the sub $200 TrueNAS platform that included both SSD boot and 10GbE. Or the budget PC for home use that had an SSD and Windows 10 for under $150. The problem though when it comes to Homelabbing is that these value options, or even something nicer like Lenovo Nano‘s,  don’t offer a supported NIC for ESXi. ESXi simply won’t play nicely with a lot of NICs and barfs on install. Considering we had already given away the prior budget platform, we sought out the bargain bin at eBay to see what we could rum up that would please VMware’s compatibility list and offer a bit more juice than the prior budget system. 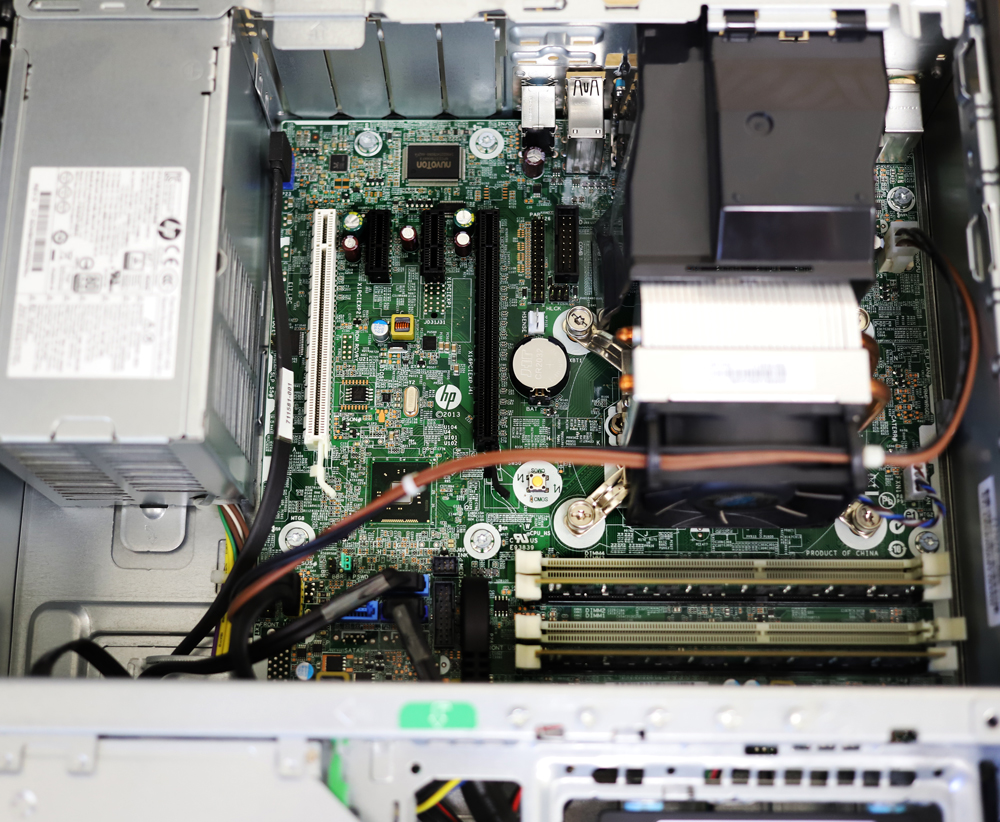 Our recent review of the new HP SFF system got us thinking again about how to create a VMware-friendly homelab that’s small, easy on the power bill, and compatible with ESXi. In this case, we found a pretty capable system again, that includes an SSD and Windows 10 license. So just like last time, you get a system that’s perfectly capable for most mainstream tasks and uses cases, but a little more CPU than the Lenovo we bought for $110.

People will be quick to say, a NUC might be smaller and cheap too, but with components, all in you are closer to double or triple the cost of a used system. And while this system is old, it’s not really anything to complain about with 13.2GHz of aggregate CPU speed to toss around with a hypervisor. Many homelab platforms aren’t always about high performance, but broad compatibility to work through experimenting with operating systems.

Drivers and hardware support are the main differences with enterprise versus consumer operating systems. Consumer platforms generally operate around the idea of if it might work, find a way to get it working. Lots of variables and most systems aren’t pushed as hard. They are also rebooted often.

Enterprise systems are geared towards stability, performance, and reliability. While you might think most of that comes down to being built better, it’s more about being built consistently with a known set of good parts. Common network interfaces are used in the enterprise, which doesn’t seem like a big deal until you boot up a consumer platform with ESXi and it hard stops saying you don’t have any supported network card.

VMware Flings can help to get around the compatibility problem, but they are experimental at best, and bugs are very common. So getting back to the HP SFF G1, from the start we knew it had an Intel 1GbE NIC inside, and from that, we could start on solid ground. 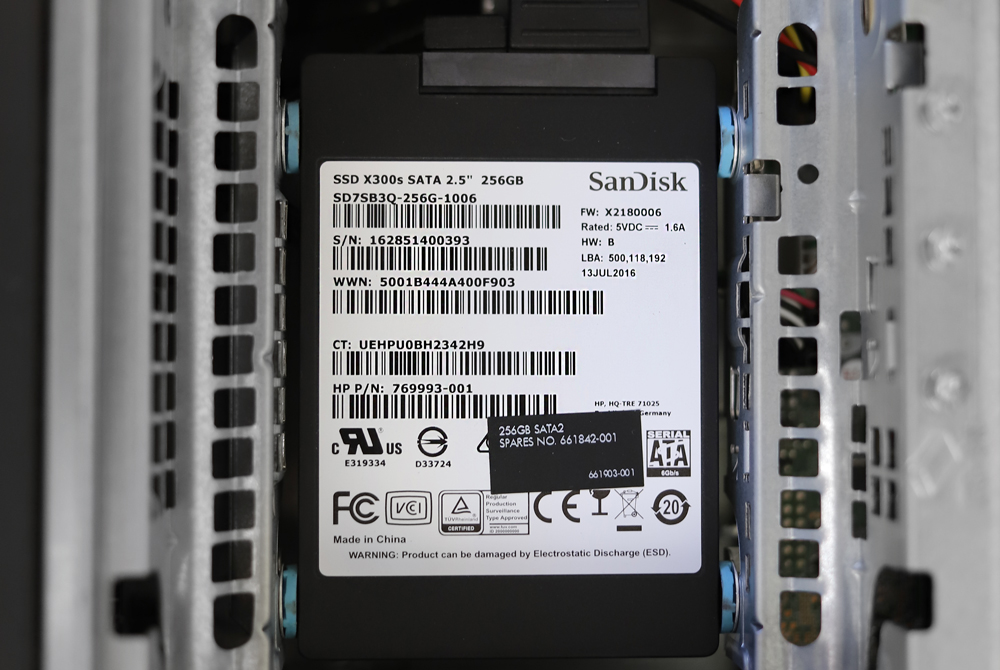 At a high level, here’s what our system looks like. Note that this budget platform comes with an SSD and a Windows 10 Pro license. Not too shabby.

And because it’s eBay, there’s a little dose of “salty seller” with this disclaimer. “Absolutely no partial refund for any reason. We will send a replacement or you can return it for a full refund. Please don’t try.” At the end of the day it’s used hardware, so don’t expect a pristine chassis but do some tests on it when it arrives.

Looking into the components a little further, we see the Intel CPU isn’t so bad for a 2014 production run. The Haswell CPU offers four cores and four threads with an 84W TDP. The SSD is decent too for the era, a 256GB SanDisk X300s SATA unit. Importantly, we have a compatible 1GbE Intel NIC onboard, which will be critical for the ESXi install.

Getting Started with ESXi

The nice thing with VMware ESXi is that it is readily available and you don’t need to pay to get it working out of the box. Like many enterprise software installations, it works in an unrestricted form for a period of time. VMware gives you 60 days, which at that part you can nuke it and spend 10-15 minutes installing it again. For a production environment, you would never take this approach, but for test-dev or homelab, it’s the standard operating procedure. 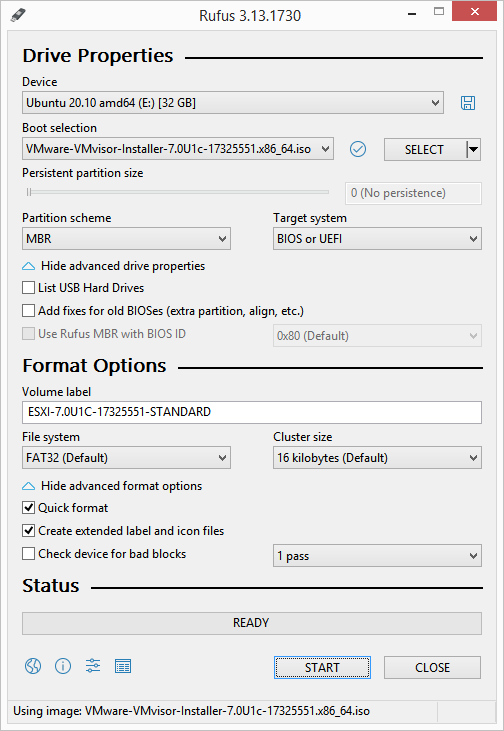 You will need to register for a VMWare account, but downloading the installer itself is easy after that point. Grab the VMware vSphere Hypervisor version of your choice, which is going to net you a ~350-400MB ISO file. Once downloaded, use a utility such as Rufus to burn it to a thumb drive.

At this point, the next steps come down to how you have your system set up. If the boot order is from an internal drive first, you will need to hit the BIOS prompt for the boot menu. If you tend to blow through a ton of installations often, making your removable USB device the first in the boot order can help speed up that workflow.

The ISO is quick to boot up and will walk you through the installation where you agree to the terms, select the install location, create a root password, and confirm the installation. After you are done, if you have an environment with DHCP, when it reboots you will have an IP right away for connecting to the ESXi host.

You can also use the limited ESXi console screen for basic network configuration tasks like setting a static IP, connecting to a VLAN, changing DNS, and pinging sources to debug issues. 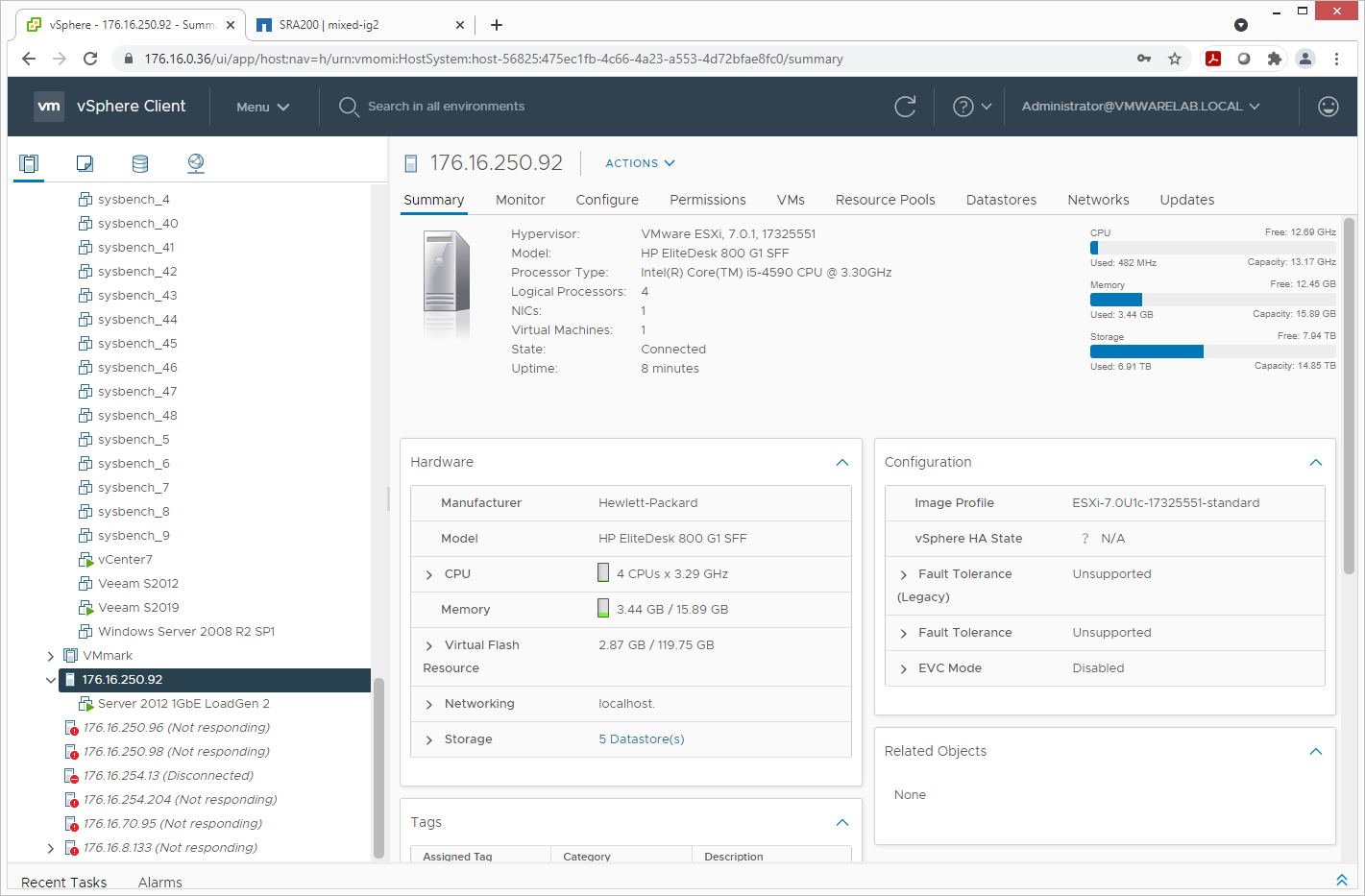 At this stage, we brought the little HP SFF G1 into the vCenter fold with our larger VMware environment. It looks and feels like any other server, no matter if it has two 64-core processors and 1TB of RAM, or 4-cores and 16GB of RAM and a bit of wear and tear.

With a lot of iSCSI shared storage on tap in our lab already, it was simple to add the iSCSI software adapter to the SFF G1 host and connect it to our NetApp all-flash array. With those datastores connected, we could move over existing VMs and start using them immediately. 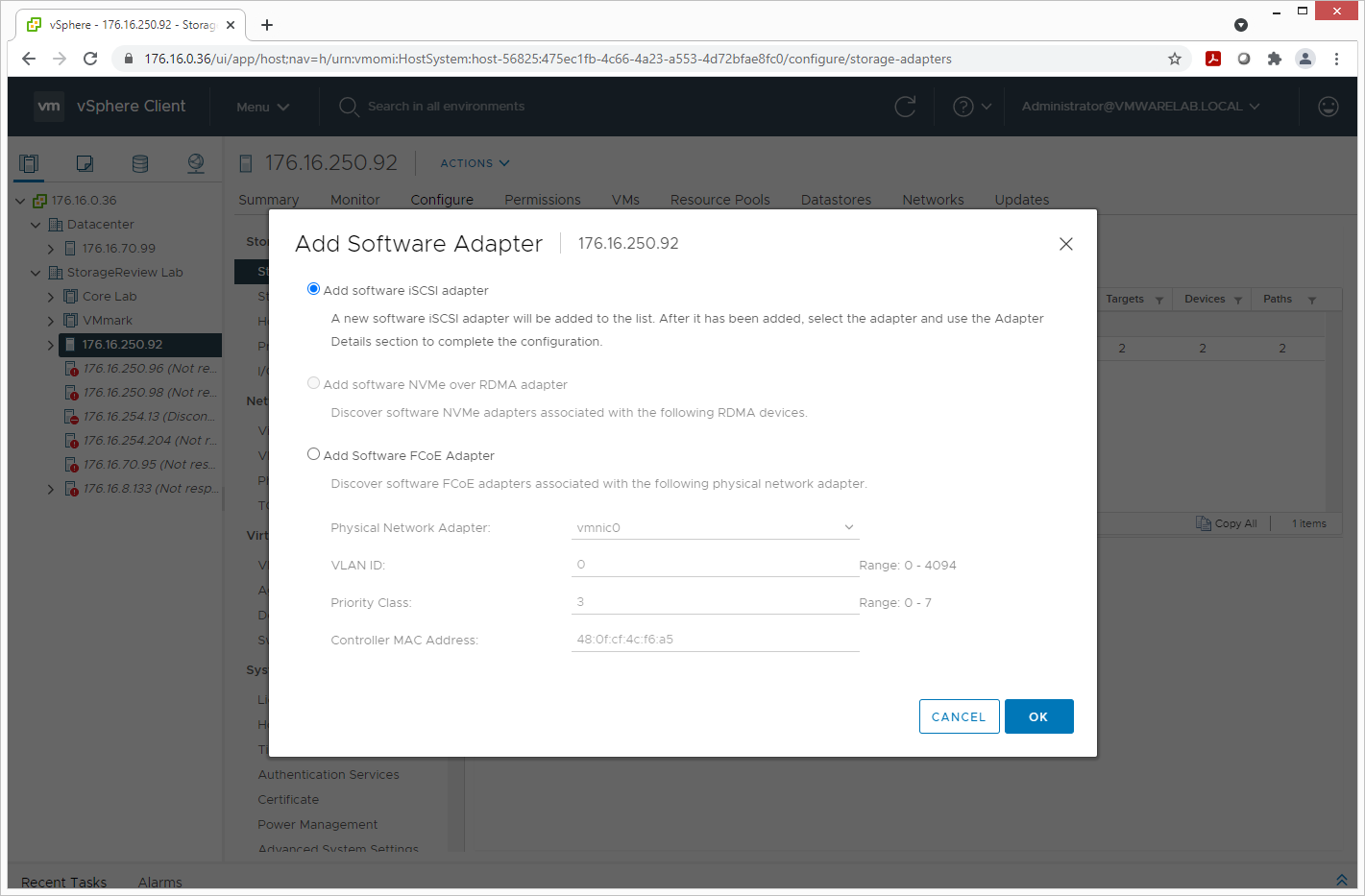 As we’ve built our own homelabs or helped and/or witnessed others build theirs, it’s important to reflect on common mistakes and learn from them. A homelab environment is really only useful if you can use it easily and it doesn’t overtake your home or apartment. Some may enjoy the massive footprint of an old server, but a huge old server or a small workstation such as the HP SFF G1 both get you to the same spot for playing around with most features.

The primary difference really comes down to noise and power consumption from the enterprise processors. Yes, an older server may have a bit more RAM, more drive bays, or multiple CPUs, but it also has a huge design setup for a server rack. I’ve yet to come across a rack-mount server that was anywhere near as quiet as a normal desktop. Most of my servers I can hear from my office down the hallway, with the doors closed.

Noise, power, and heat are quick ways to get roommates or spouses turned off the idea of a homelab. This is where I think the flip side of the coin comes up with homelab designs, often using micro-sized systems which have a huge cost premium. An Intel NUC is a good example of fantastic hardware but at a steep price when building multiple systems. You also get tied into using premium components like M.2 SSDs.

The balance between large servers and NUCs, I feel, is the segment of off-lease SFF workstations. You tend to find great deals including Windows Pro digital licenses included, a moderate amount of RAM, and pretty solid CPU offerings for under $200. A homelab is not a replacement for a data center environment. Think about it more as operating a digital IT classroom.

You could easily fit a bunch of the HP SFF G1 or similar-class units inside an IKEA cabinet and you probably won’t notice them operating in the background. With their low cost, you are also able to have multiple systems in operation without killing your budget, giving you uptime with things like VMware, Proxmox, Windows Server, and Linux all at the same time.