The Intel SSD D5-P5316 Series is the company’s newest enterprise SSD highlighted by 144-layer QLC NAND and the PCIe 4.0 interface. Available in capacities up to 30.72TB in both the 2.5-inch and E1.L form factor, this is a read-optimized SSD designed for warm storage. This means customers will have access to upwards of 1 petabyte of storage in a single 1U of rack space, which is ideal for those looking to lower their TCO via storage consolidation. The Intel P5316 SSD is built for use cases such as content delivery networks, hyper-converged infrastructure (HCI), Big Data, artificial intelligence, Cloud Elastic Storage and, high-performance computing.

The Intel SSD D5-P5316 Series is the company’s newest enterprise SSD highlighted by 144-layer QLC NAND and the PCIe 4.0 interface. Available in capacities up to 30.72TB in both the 2.5-inch and E1.L form factor, this is a read-optimized SSD designed for warm storage. This means customers will have access to upwards of 1 petabyte of storage in a single 1U of rack space, which is ideal for those looking to lower their TCO via storage consolidation. The Intel P5316 SSD is built for use cases such as content delivery networks, hyper-converged infrastructure (HCI), Big Data, artificial intelligence, Cloud Elastic Storage and, high-performance computing. 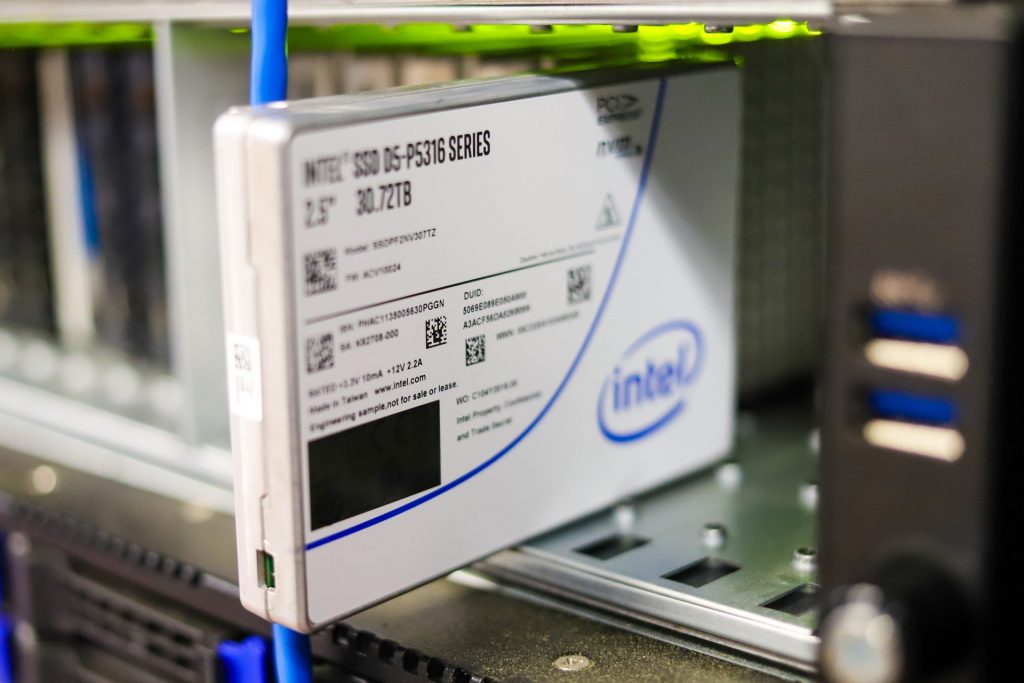 Benefits of QLC NAND in the Enterprise

QLC drives are known for their ability to drive down costs while retaining high-capacity points and solid performance. This means there are a lot of scenarios where companies can leverage QLC SSD technology. For example, VAST Data uses these drive types in their products so they can eliminate the need for HDDs, while Pliops is using their accelerator card with QLC drives for a speedy, cost-effective solution.

Moreover, Azure Stack HCI from DataON uses Optane as a cache in front of QLC in their HCI offerings. In our own use case at StorageReview, we will be using them in a project with Cheetah RAID, a company that uses QLC drives in their autonomous car data logging box. QLC isn’t for every job, but clearly, there are many places where it’s an excellent option. With all this said, because Intel was one of the first storage vendors to build QLC-based drives, they’ve had a long time to improve on the reliability, cost-efficiency, and capacity of subsequent releases. As such, compared to Intel’s past QLC products, there are certainly improvements; especially when we factor in the PCIe 4.0 interface and specific architectural improvements.

For performance, all D5-P5316 capacities and both form factors are quoted to deliver up to 7GB/s in sequential reads, while the 30.72GB models offer a bit more speed in writes with 3.6GB/s. In random 4K reads, Intel quotes their new drive at 800,000 IOPS for all models. These are pretty solid numbers, especially for a QLC-based drive, and are a huge improvement over Intel’s D5-P4320 and D5-P4420, the company’s last-gen, QLC enterprise series SSDs. 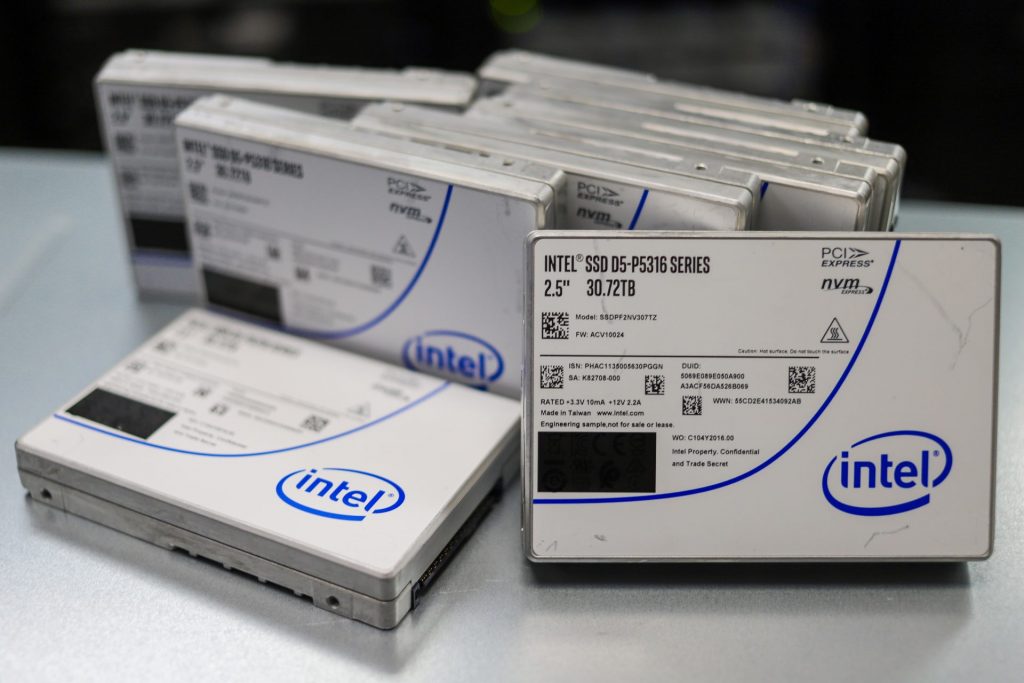 Intel has also added a range of firmware enhancements to the D5-P5316, all of which are designed to improve latency and management capabilities while adding new NVMe features for enterprise and cloud workloads. This includes NVMe 1.3c and NVMe-MI1.0a- compliancy and Scatter Gather List (SGL), the latter of which removes the need to double-buffer host data. In addition, the Persistent Event Log offers a more detailed drive history so users can debug at scale, while AES-256 Hardware Encryption, NVMe Sanitize, Firmware, and Measurement offer more security for users.

The E1.L form factor is also significant. Though an E1.L model is available with the older D5-P4326 series, the D5-P5316 has doubled the capacity to over 30GB. This will allow customers (specifically in the hyperscale space) to have very large-scale deployments due to the density that the long ruler offers. That said, the need for E1.L is certainly much more niche than the smaller E1.S form factor (which offers an ideal blend of capacity and performance), as there aren’t too many scenarios where organizations are willing to buy 20+ 32TB SSDs for a single system. The option is there for those who need it, however.

Note that we compared the Intel D5-P5316 drive against the Intel P5510 TLC SSD only to have a frame of reference (as TLC and QLC drives offer completely different performance profiles), not to demonstrate which drive is better. We just did this for the four corners testing.

In 4K random writes, the Intel P5316 had weak results, posting a peak of 17,529 IOPS ending at just under 3,000µs. The P5510 had a peak performance of 459k IOPS at a latency of 1105.7µs. The P5316 results are expected, however, due to the drive’s larger indirection unit (IU) of 64KB. Anyone using these SSDs should be sure that their software accounts for this, it’s suggested best practice to issue writes that are IU aligned. As seen here, the P5316 will take writes that are smaller than its IU, but the results are not desirable. This is why drives like this are often put behind a cache or software that can handle write shaping.

With the larger indirection (IU) size that the Intel P5316 supports, we’ve also included performance results for a larger 64K random workload. In Random 64K read, we measured 5.3GB/s read from the P5316, edging out the P5510 that topped at 4.8GB/s.

Switching over to 64k sequential workloads, the P5316 leveraged the new PCIe Gen4 interface and boasted an impressive 112k IOPS (7.04GB/s) at 566µs, which was actually what Intel quoted the drive at and faster than the TLC-based P5510 SSD.

With SQL 80-20, the new Intel QLC drive had a peak performance of around 77K IOPS and 300µs before slowing down near the end with 72K IOPS at almost 450µs.

Next, we switched over to our VDI clone test, Full and Linked. For VDI Full Clone (FC) Boot, the Intel P5316 showed a performance spike at the beginning of the test, though it quickly leveled out peaking at 119,826 IOPS at a latency of 276.9µs.

With VDI FC Monday Login, the P5316 had a peak of 23,416 IOPS with a latency of 675.9µs before taking a pretty significant dip in performance.

Finally, with VDI LC Monday Login, the P5316 showed a peak performance of 22,901 IOPS at a latency of 694.3µs before suffering from a significant performance spike at the end once again.

The Intel SSD D5-P5316 is a welcomed addition to the company’s enterprise SSD portfolio. Its use of 144-layer QLC NAND means Intel can offer it in high-capacity points at a lower cost, while the PCIe Gen4 interface allows it to boast sequential read speeds on par with TLC-based SSDs. This makes it ideal for a range of use cases, many of which we noted in this review. Intel quotes the P5316 with up to 7GB/s read and 3.6GB/s write in sequential speeds. 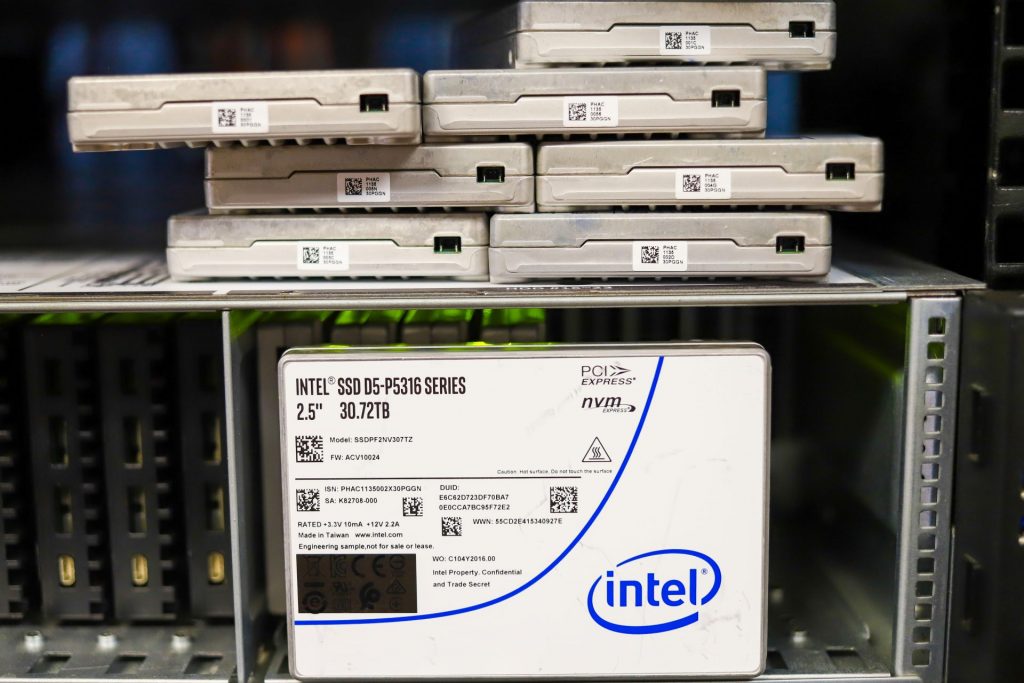 The Intel P5316 also comes in two high-capacity models, 15.36TB and 30.72TB, and is available in both the 2.5-inch and E1.L form factors. Though the demand might be significantly less than the E1.S form factor, E1.L allows organizations to have very large-scale deployments due to the inherent high density of the long ruler.

To gauge its performance, we tested the Intel P5316 alongside the Intel P5510 SSD and looked at VDBench synthetic workloads. This comparison with the Intel TLC drive is simply to have a frame of reference, not to show which drive is better in specific workloads. That said, in our first series of tests, we looked at VDBench with highlights that include: 917K IOPS in 4K read, 18K IOPS in 4K write, 7.04GB/s in 64K read, and 808MB/s in 64K write. The main purpose of the Intel P5316 Series is to give organizations a viable option to replace their hard disk drive configurations in the data center. In this, the new Intel series has certainly succeeded. The company has created a drive that finds a great balance between capacity, performance, and cost. The biggest factor here is the PCIe Gen4 interface, which allows the P5316 QLC SSD to offer read performance that is essentially on par with the higher-end enterprise drive like TLC-based P5510. This creates a lot of flexibility and a range of options with Intel’s new D5 series, especially for organizations with lower budgets.