The Lenovo ThinkPad P1 G4 is a 16-inch mobile workstation that balances portability with performance. Though not a top-performing workstation like the ThinkPad P15, it’s more than up to demanding tasks with up to an eight-core CPU, 64GB of RAM, two SSDs, and a 16GB Nvidia RTX A5000 GPU. Everything about this laptop is productive, from its high-resolution 16:10 screen to its comfortable keyboard and touchpad. It also has a professional look and strong build quality. It’s not bargain-priced, but we found little to dislike and give it our recommendation.

The Lenovo ThinkPad P1 G4 is a 16-inch mobile workstation that balances portability with performance. Though not a top-performing workstation like the ThinkPad P15, it’s more than up to demanding tasks with up to an eight-core CPU, 64GB of RAM, two SSDs, and a 16GB Nvidia RTX A5000 GPU. Everything about this laptop is productive, from its high-resolution 16:10 screen to its comfortable keyboard and touchpad. It also has a professional look and strong build quality. It’s not bargain-priced, but we found little to dislike and give it our recommendation.

The ThinkPad P1 G4 is a mid-range mobile workstation with a 16-inch screen. Though not quite as performance-focused as Lenovo’s flagship ThinkPad P15, it’s much more portable at just 0.7 inches thin and a starting weight of four pounds.

That said, don’t think the ThinkPad P1 G4 is lightweight on performance; it offers up to an eight-core Intel “Tiger Lake-H” CPU, including Xeons with ECC memory. These chips are significant upgrades over the “Comet Lake” chips in the previous-generation ThinkPad P1 Gen 3 model. 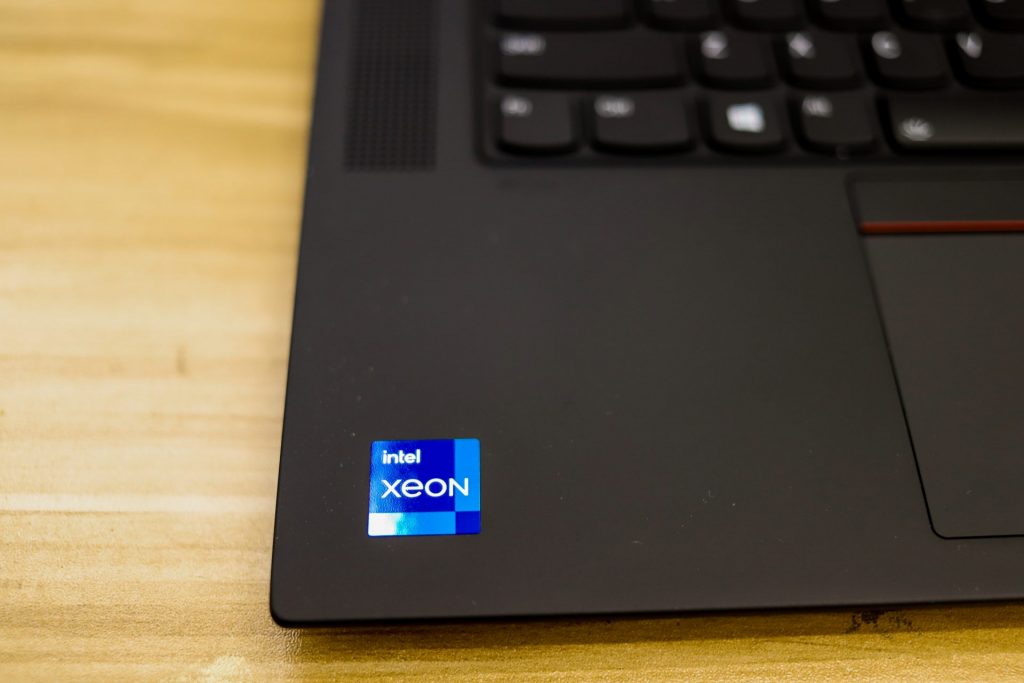 The ThinkPad P1 G4 also massively upgrades its GPU offerings over the Gen 3 model, which topped out with a 4GB Nvidia T2000. The ThinkPad P1 G4 goes up to the formidable ray-traced RTX A5000 with 16GB of dedicated video memory.

The other significant design change for this generation is a switch to a taller 16:10 screen, which offers more vertical screen resolution for reduced scrolling. The highest screen resolution it offers is 3840×2400.

Rounding out the ThinkPad P1 G4’s specifications is support for up to 64GB of RAM and two PCIe Gen 4 SSDs. That is respectable for a thin-and-light mobile workstation; getting more RAM or storage will generally require going to a larger, thicker workstation, such as the ThinkPad P15 or the Dell Precision 7560.

The ThinkPad P1 G4’s full specifications are below:

The ThinkPad P1 G4 looks like a ThinkPad has always looked – all business, but stylish in a classic way. Dell’s and HP’s business lines have drastically changed their look over time while Lenovo sticks to the same formula – and it works. Build-wise, the laptop feels strong, stiff, and durable as a workstation should. 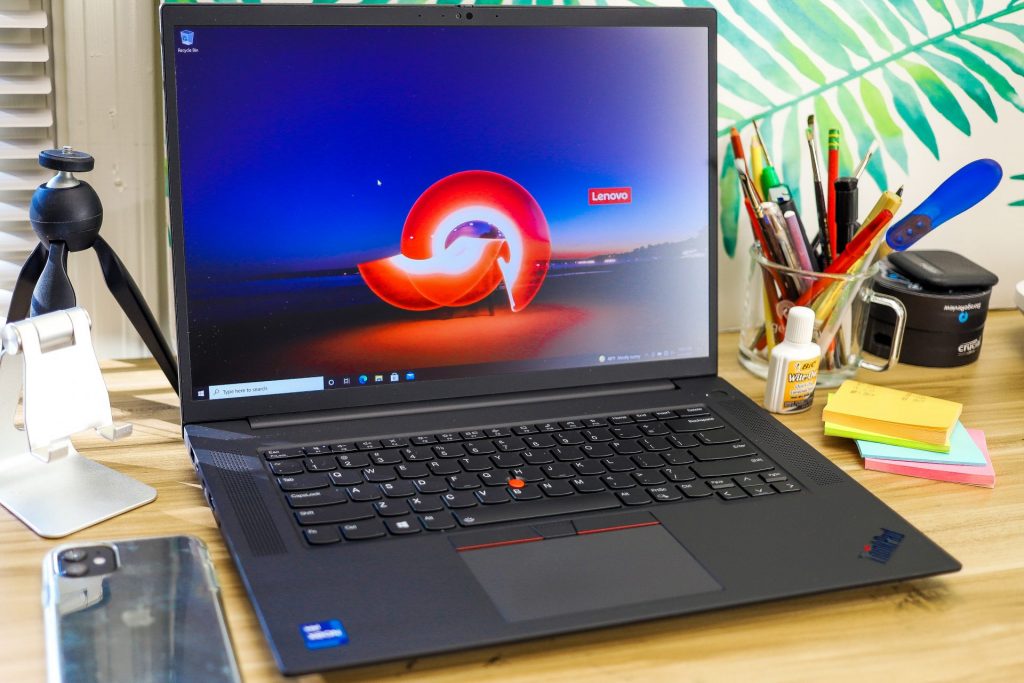 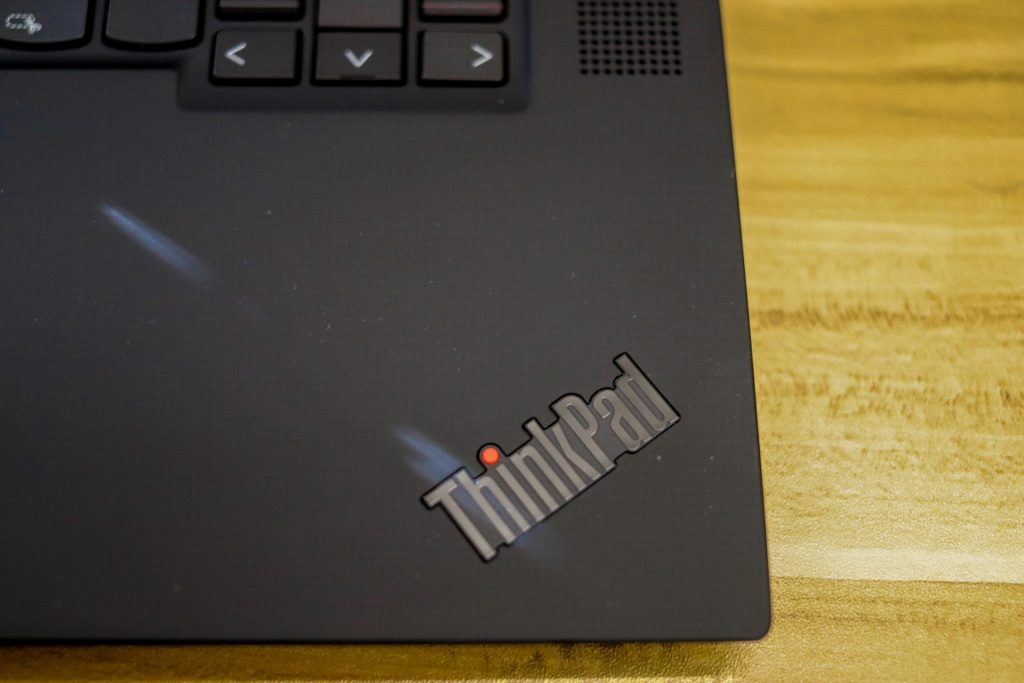 The keyboard has an excellent tactile response, white backlighting, and an intuitive UltraNav solution (center pointing stick with dedicated buttons). Lenovo left off a number pad, but it would have been a tight fit. 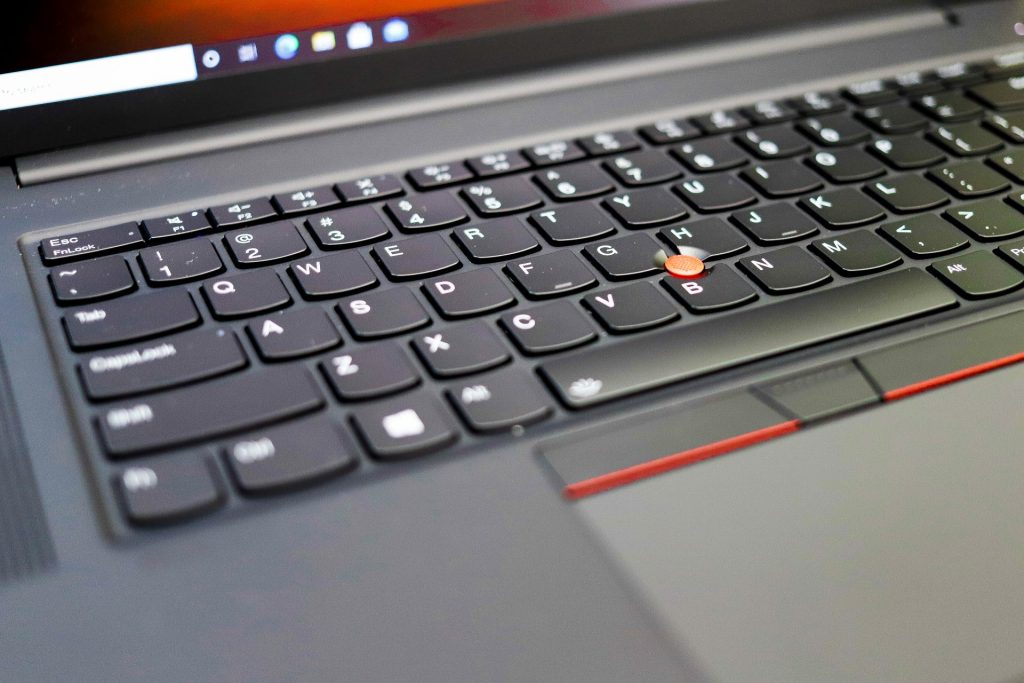 The buttonless touchpad is spacious and quickly responds to physical clicks (accomplished by pressing the pad’s surface). The speakers on either side of the keyboard project well for a laptop. At the top right, the power button serves as the fingerprint reader.

Our review model has the standard screen resolution of 2,560×1,600 pixels, otherwise known as WQXGA. This is a 16:10 aspect ratio with more vertical space than a 16:9 screen (its equivalent resolution would be 2,560×1,440 pixels). The screen’s anti-glare surface blocks reflections and it’s plenty bright, rated for 400 nits. Lenovo says it covers 100% of sRGB, which is satisfactory.

This screen doesn’t support touch, but that is available on the WQUXGA (3,840×2,400) screen, which also has a higher rated brightness (600 nits) and 100% Adobe RGB color. All screen options include a 1080p webcam with a sliding privacy shutter, though only some models have infrared technology for facial recognition.

Connectivity on the ThinkPad P1 G4 is solid. On the right are an SD card reader, two USB-A 3.2 Gen 1 (the second is always-on and supports device charging while the laptop is powered off), and a Kensington NanoSaver lock slot. Photographers should be especially appreciative that the SD card reader is full-size. There may also be a SIM card slot here for the optional 4G/5G wireless mobile broadband. (Our review unit is not so equipped.) Its standard Intel AX210 wireless card supports the latest Wi-Fi 6E and Bluetooth 5 standards. 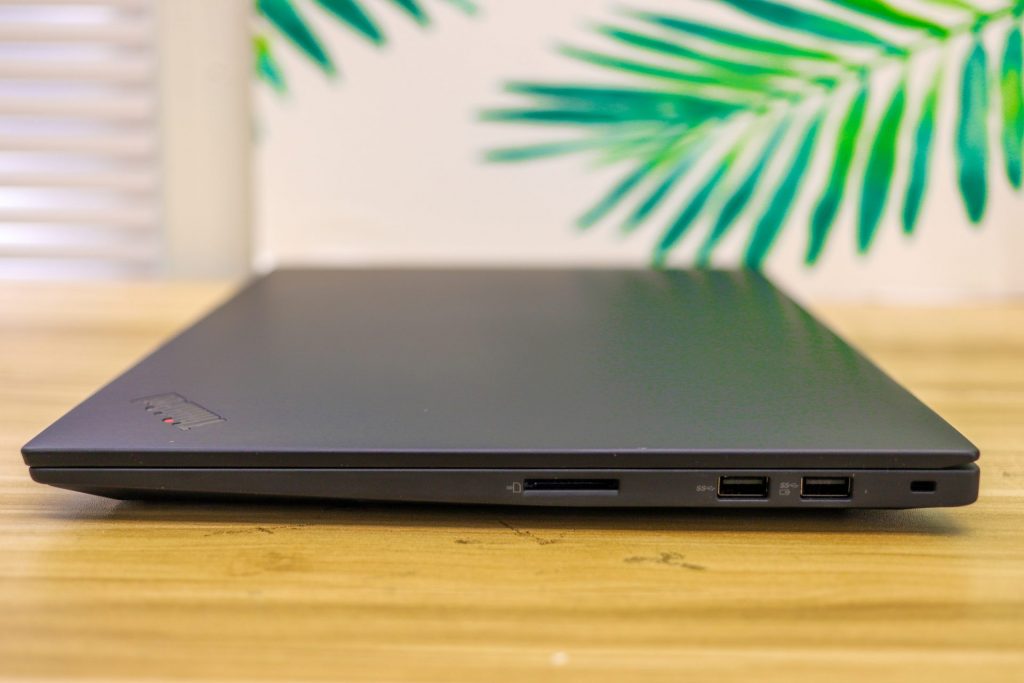 On the left edge are the power jack, two Thunderbolt 4 (USB-C), HDMI 2.0/2.1 video output, and an audio combo jack (headphone/microphone). 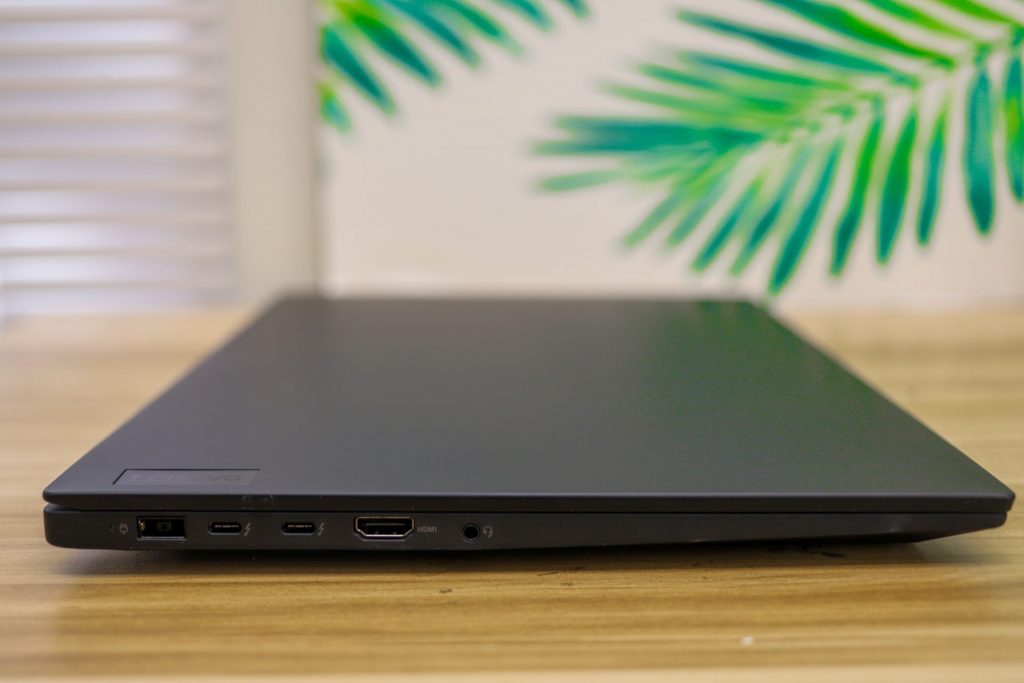 Our Lenovo part number 20Y3003XUS has these specifications:

This is no doubt an expensive laptop, but our review model is far from the priciest; maxed-out Core i9 and Nvidia RTX A5000 models can command in excess of $6,000. It’s nonetheless priced in line with what laptops of this caliber cost; Dell’s Precision 5560, with a faster eight-core Xeon W-11955M, albeit only a 1920 x 1200 display, goes direct from Dell for $4,963. Our model’s three-year, next business day warranty and enhanced (Lenovo calls it Premiere) support is notable.

Oddly, our review model pairs a Xeon CPU with non-ECC memory when the only real reason to get the Xeon is ECC support. (The ThinkPad P1 G4 with ECC memory and otherwise identical specifications was $4,294 at this writing.) The Core processors are otherwise a better value, offer more cores (up to eight), and, unlike the Xeon chips, don’t require a Windows 10 Pro for Workstations license. Only certain CPUs (including our unit’s Xeon) support Intel vPro remote management, so review the specifications carefully before buying if you need that.

Our unit’s Nvidia RTX A2000 GPU is the least-expensive ray-traced GPU option. It has only 4GB of video memory, which can be exhausted quickly depending on the workload, so you may need to pony up for a faster GPU model with more memory. (The top option is the 16GB Nvidia RTX A5000.)

The ThinkPad P1 G4’s two cooling fans are visible through the bottom grate. The exhaust goes out the rear edge. The fans are noticeable while the system is running full tilt, but not more than is usual for a mobile workstation. 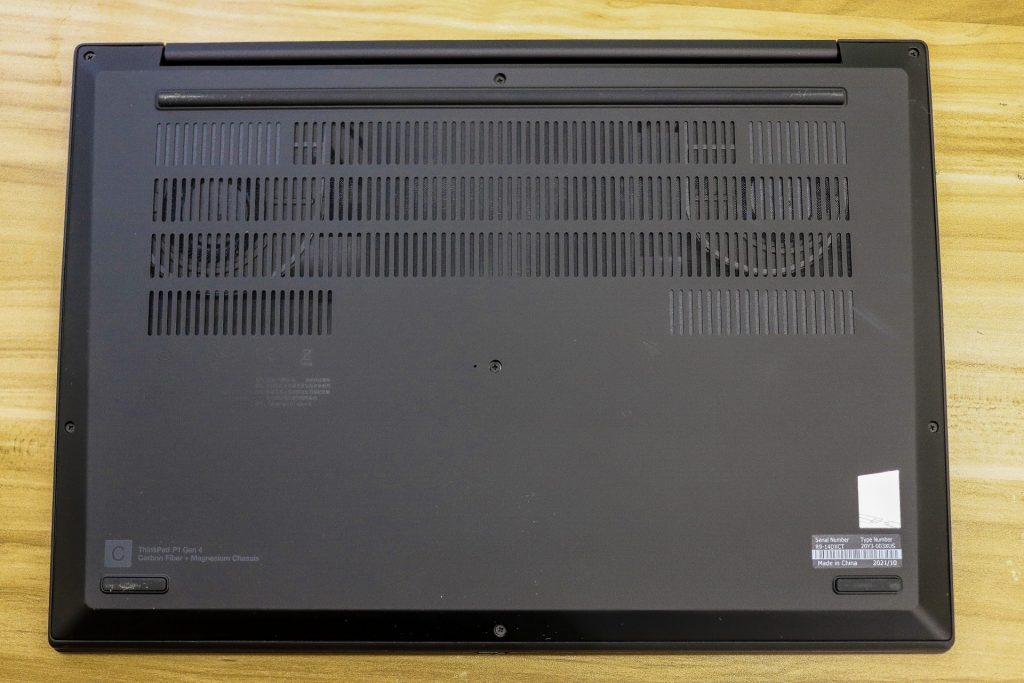 This thermal image shows a peak temperature of 116 degrees around the keyboard, though that is the keyboard deck – the keys themselves are cool enough to touch. 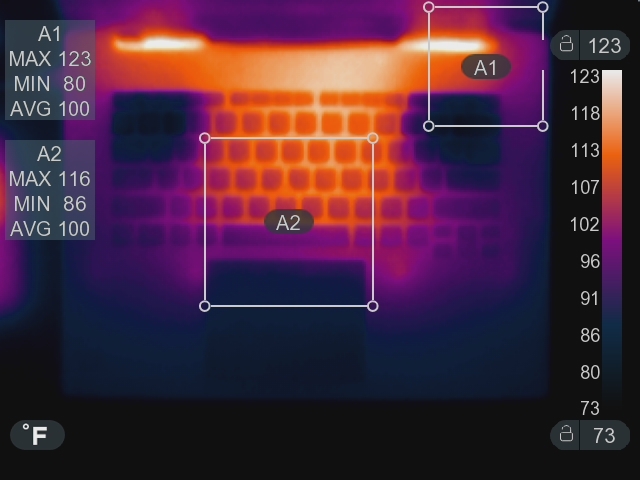 As for upgrades, removing the bottom panel reveals two SoDIMM slots and two M.2 Type-2280 PCIe slots. This is a respectable level of upgradeability. 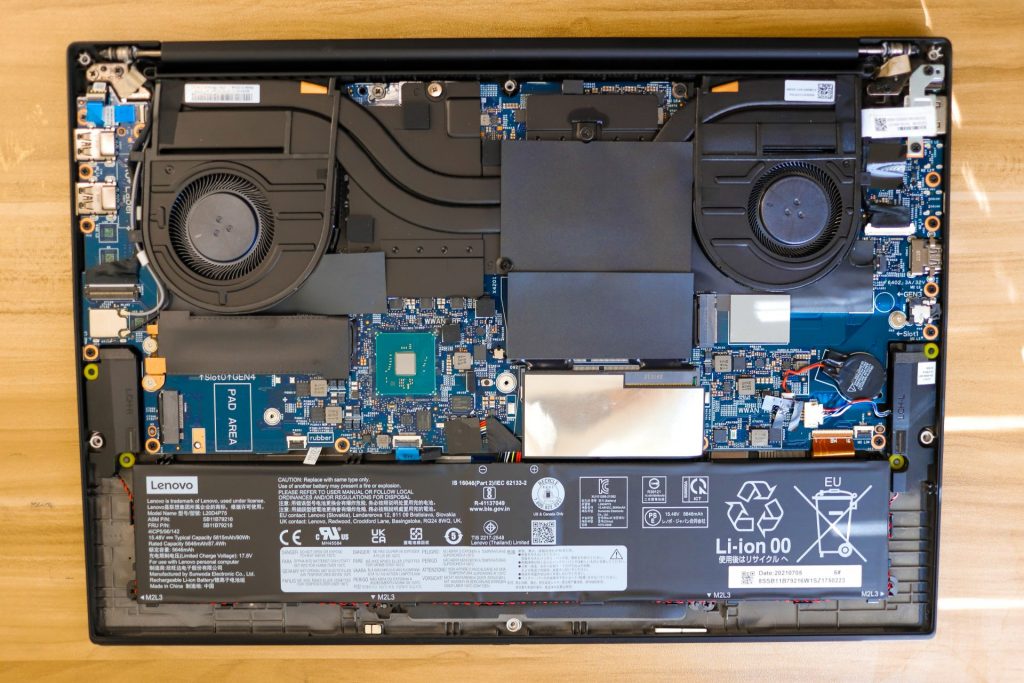 For testing, we will be comparing the ThinkPad P1 G4 to the HP ZBook Power G8 equipped with an eight-core Core i7-11850H CPU, a 4GB Nvidia RTX A2000 graphics card, 64GB of RAM, and a 2TB SSD. For GPU-focused testing, note that the ZBook’s numbers will vary because it has a much higher 4K screen resolution (3840×2160), which puts a lot of stress on the GPU and reduces performance.

The ThinkPad P1 G4’s numbers look much better than the ZBook’s here, mainly because of its lower screen resolution. Remember that if you deal with complex 3D tasks; though the lower screen resolution won’t show as much detail as a 4K screen, it won’t be as resource-hungry. For 3D work at a 4K resolution, you’ll want a top-of-the-line GPU.

The ThinkPad P1 G4 kept up with the ZBook despite having two fewer processing cores, though this test is mostly GPU-focused and that explains the close scores.

The ThinkPad P1 G4 outperformed the ZBook primarily because of its lower screen resolution as it did in SPECviewperf 2020.

LuxMark is an OpenCL cross-platform benchmarking tool from those who maintain the open-source 3D rending engine, LuxRender. This tool looks at GPU performance in the areas of 3D modeling, lighting, and video work. For this review, we used the newest version, v4alpha0. In LuxMark, higher is better when it comes to the score. The slight edge went to the ThinkPad P1 G4, though it wasn’t by a deal-breaking margin.

Next up is Blender, an open-source 3D modeling application. This benchmark was run using the Blender Benchmark utility. NVIDIA OptiX was the chosen render method. The score is in seconds, with lower being better. The ThinkPad P1 G4 significantly outperformed the ZBook; given the GPU-focused nature of this test, it’s possible that the ThinkPad’s GPU has a higher total graphics power (TGP) rating, which would imply higher performance.

Last, we look OctaneBench, a benchmarking utility for OctaneRender, which is another 3D renderer with RTX support that is similar to V-Ray. The ThinkPad P1 G4 completed this with a score of 168.49, which is a normal score for an Nvidia RTX A2000 laptop GPU.

The Lenovo ThinkPad P1 G4 shows workstation performance and portability can go hand in hand. It’s remarkably powerful for being just 0.7 inches thin and around four pounds, with excellent build quality, input devices, and a professional look. It improves on the outgoing model by offering a more productive 16:10 screen aspect ratio and much faster GPU options, up to the Nvidia RTX A5000.

Our review model showed excellent performance and often bested a similarly-equipped HP ZBook Power G8. The price may be tough to swallow, but it’s no more expensive than other mobile workstations in this class. Overall, the ThinkPad P1 G4 gets our recommendation.