Nearly two years ago at the Flash Memory Summit, Liqid announced its Honey Badger SSD, or properly known as the Liqid Element LQD4500 edge card. At the time, the company claimed that this was the world’s fastest NVMe storage. How fast? The claims were 24GB/s and over 4 million IOPS at the time, again, a couple of years back.

Nearly two years ago at the Flash Memory Summit, Liqid announced its Honey Badger SSD, or properly known as the Liqid Element LQD4500 edge card. At the time, the company claimed that this was the world’s fastest NVMe storage. How fast? The claims were 24GB/s and over 4 million IOPS at the time, again, a couple of years back. 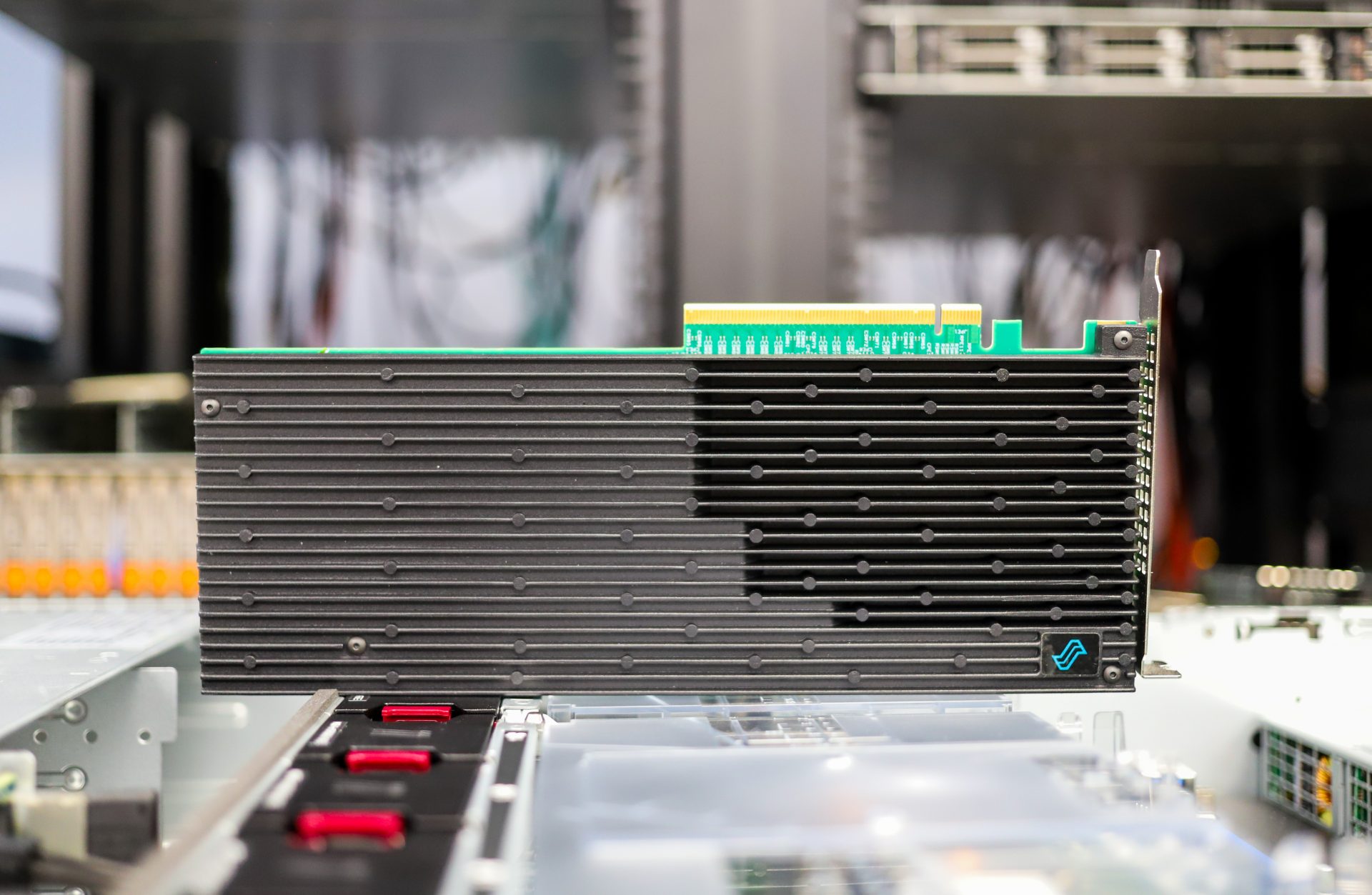 How does the Liqid Element LQD4500 deliver performance?

The quoted numbers are pretty impressive, so how does the SSD get there? First off, it leverages the PCIe Gen4 interface, which at the time of the announcement wasn’t very common. The drive is also composable meaning that it can be configured in different ways, for max redundancy or maximum performance. The drive is quoted as delivering the above performance with as little as 20μs for latency. 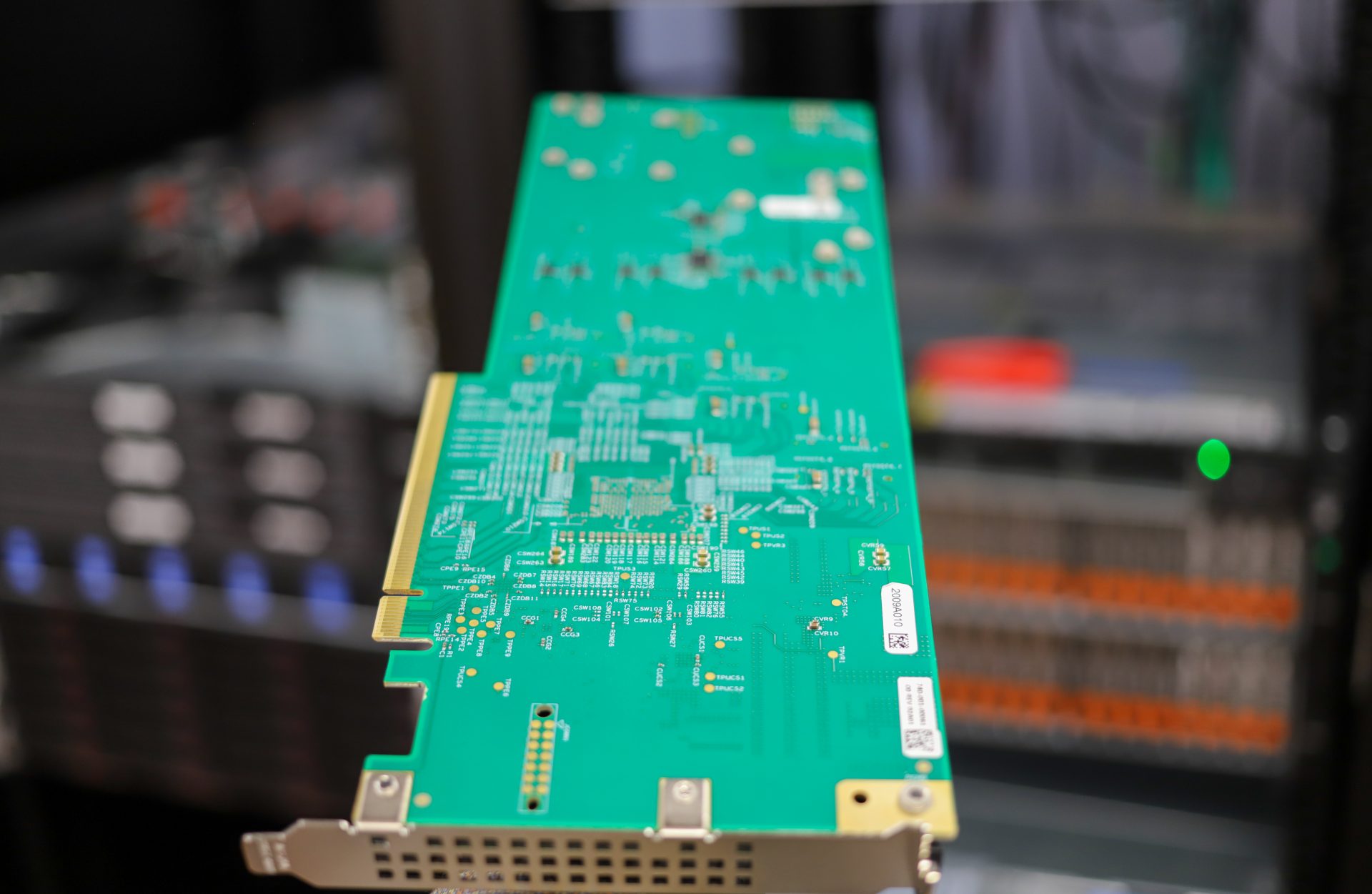 The SSD comes in an FHFL AIC though it is a slim AIC fitting in a single expansion slot. In this form factor, Liqid was able to pack in 32TB of capacity into certain configurations. For endurance, the Liqid Element LQD4500 offers up to 61.53PBW depending on the eight underlying SSDs. Along with general composability, users can throttle thermal output and actively manage power as well. 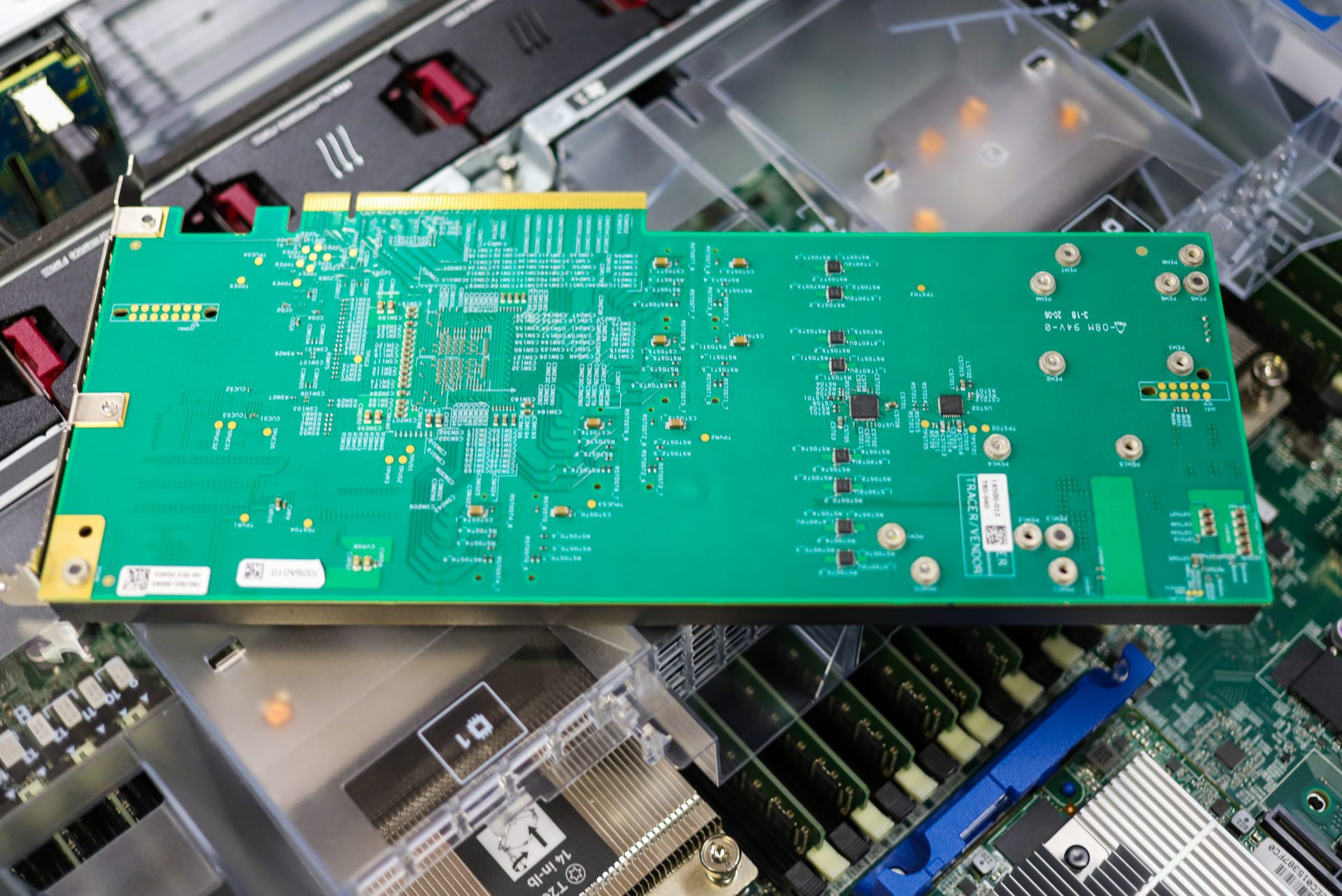 Let’s look at the capacity for a moment. This isn’t a card filled with large NAND packs. Instead, there are up to eight M.2 SSDs on the Honey Badger. For our review, we are using 2TB Toshiba XG5-P SSDs, similar to the Toshiba XG5 we reviewed here. The card can take these 8 Gen3 drives and use the PCIe Gen4 switch onboard to hit higher numbers overall. This is different than others that leverage PCIe port bifurcation to connect multiple individual drives to a single PCIe slot. It should also be noted that performance will vary depending on the underlying SSDs. 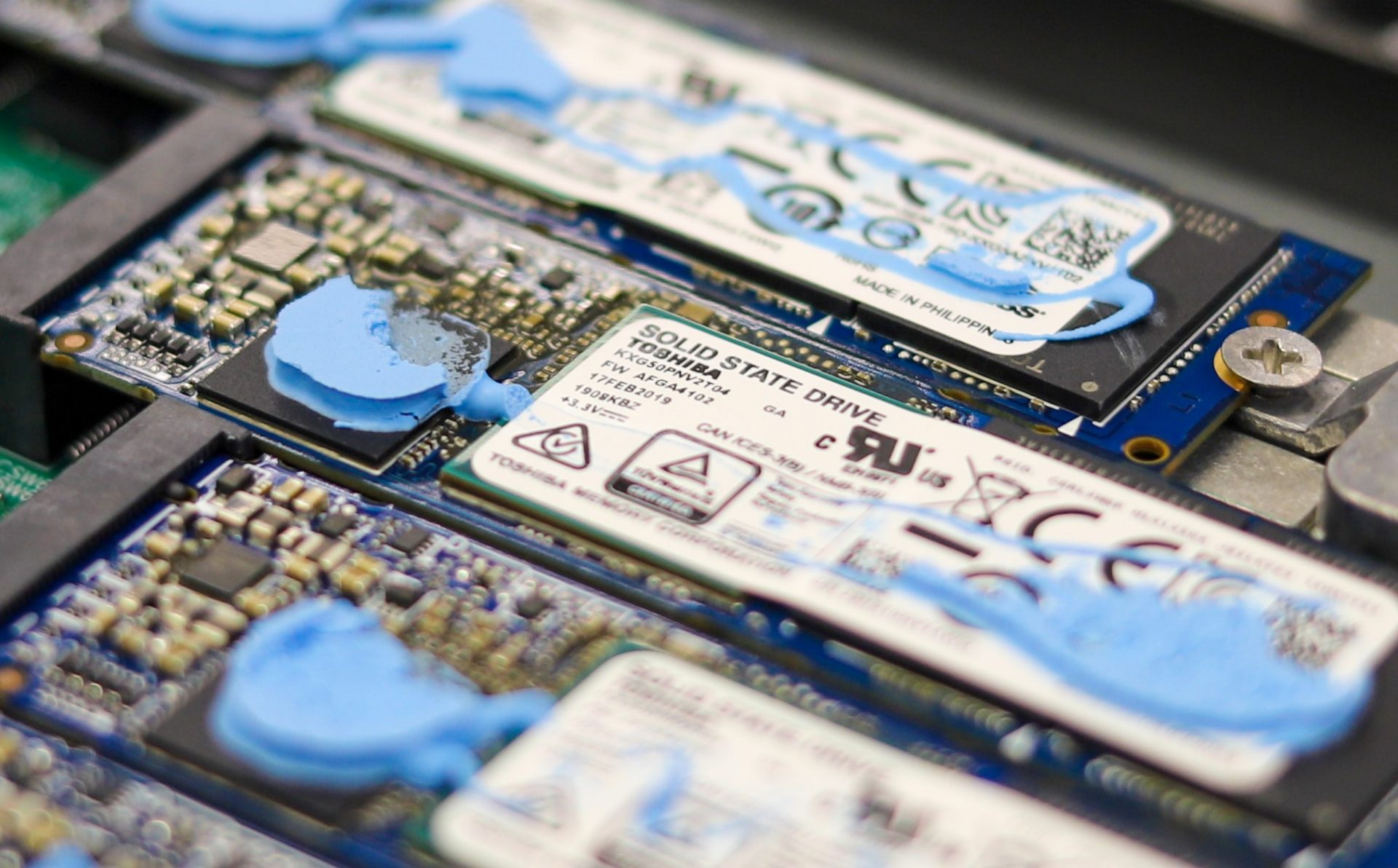 There are two “flavors” here, data center and enterprise. The data center version offers 7.68TB, 15.36TB, and 30.72TB configurations through different capacity Samsung 983 M.2 SSDs. For the enterprise version, the company offers 6.4TB, 12.8TB, and 25.6TB configurations. These various builds go a long way toward how the Honey Badger can hit different speeds as well as its top capacities.

The Liqid Element LQD4500 isn’t the normal enterprise SSD. It is an FHFL AIC that slots in but it has an interesting design. The overall card is fairly slim, so it doesn’t take up too much space inside of a server in terms of z-height. The card is very long though (in spec), which makes it difficult to use. Many PCs can handle it just fine, but when it comes to servers, that’s another issue. Only a small percentage of the Gen4 servers in our lab could fit the card. 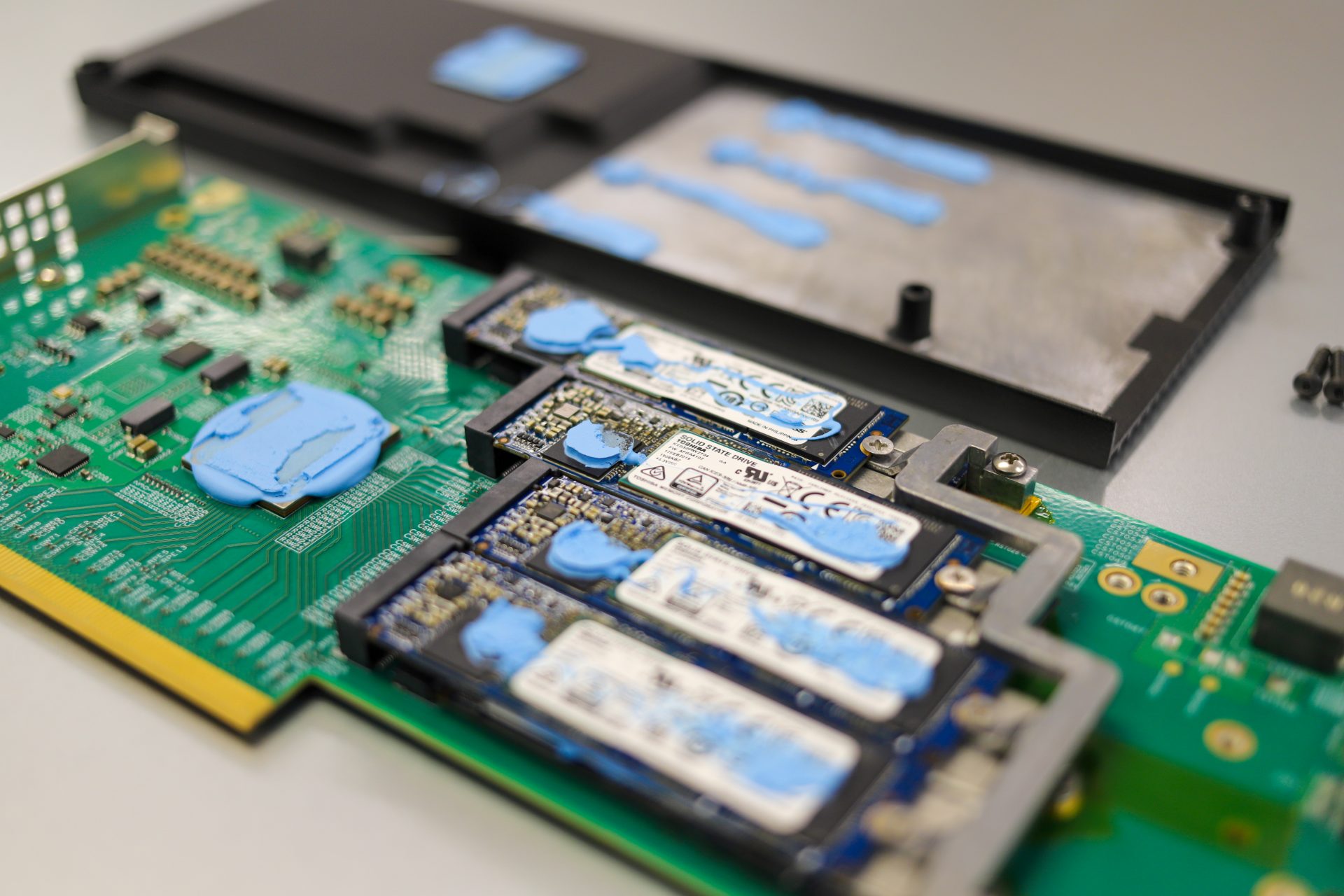 The top of the card is covered in a fairly large heat sink. It can be peeled off though, revealing the double-stacked SSDs inside. Not to worry about the blue goop, that’s thermal transfer past for the SSDs and the PCIe Gen4 switch which is on the board. The design is really quite novel, it’s unusual and cool to see storage set up in such a manner. 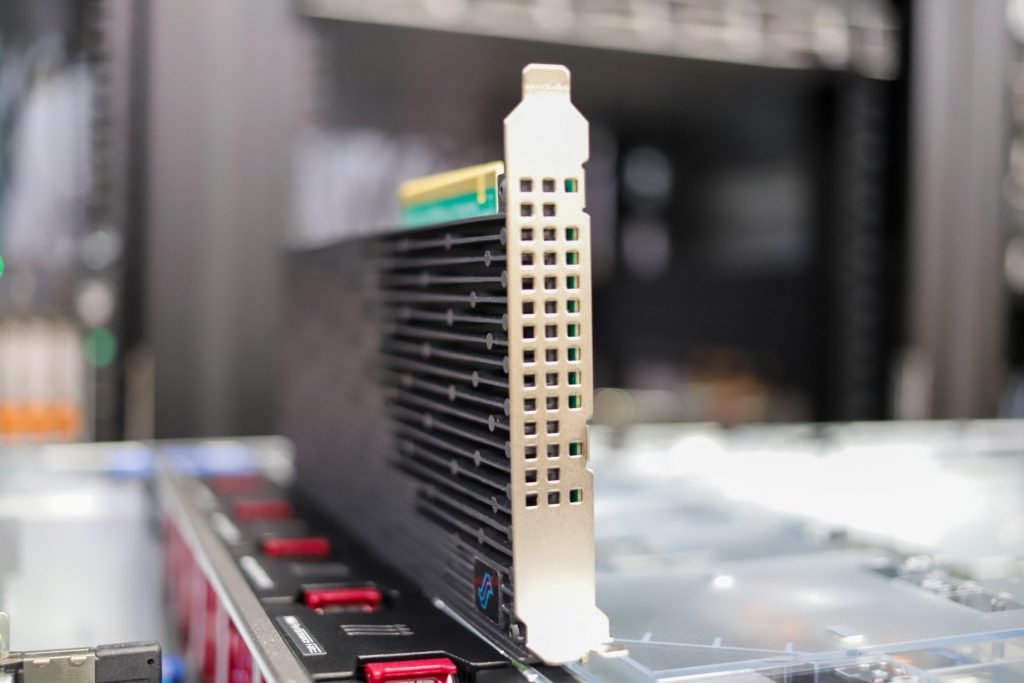 Switching over to our sequential, 64K workloads, in read we saw a peak of about 218K IOPS or 13.6GB/s at a latency of just over 1ms.

Next, we switched over to our VDI clone test, Full and Linked. For VDI Full Clone (FC) Boot, the Honey Badger saw a peak of 499,859 IOPS at a latency of 442µs before dropping off some.

For VDI Linked Clone (LC) Boot, the Liqid Element LQD4500 hit peak performance of 322,332 IOPS and 310µs for latency before dropping off some.

At its release, the Liqid Element LQD4500 PCIe AIC SSD (codenamed Honey Badger) was billed as the fastest SSD in the world. That may have been true at the time, as there were virtually no PCIe Gen4 SSD available, though times have changed. Still, the AIC comes with some very nice quoted speeds of maxes up to 24GB/s and over 4 million IOPS all at less than 20μs for latency. The card works by taking up to eight M.2 SSDs and combines the speed through an onboard PCIe Gen4 switch. While our early version included eight Gen3 SSDs, the platform is agnostic and capable of leveraging different models for even greater performance. The only limiting factor then is the x16 Gen4 slot and a server or PC that can support the full-height, full-length card.

The Honey Badger is hands down one of the best M.2 edge card designs we’ve seen, focusing on the enterprise market versus the prosumer market, where similar designs have focused. The card is able to take the performance of several M.2 drives and combine them through a PCIe switch, all for higher performance. The design is more robust than others that require port-bifurcation to work, although that comes with a higher price tag.

Overall, the Honey Badger was Liqid’s gateway product. Something that when it was launched, garnered a ton of attention because of the topline speed, Gen4 interface, and onboard PCIe switch. This let Liqid lead with the fun and fast card but backfill the sales motion with their composable infrastructure message, which is far more meaningful for the company. Server design has caught up some, and while you can’t get 24GB/s in a single slot (yet), there are many reasons, like serviceability, performance, and selection, why U.2/3 SSDs may be more compelling. Even so, the Honey Badger is a special design and one that creative pros, hyperscalers, and others may benefit greatly from.

Update 7/13/2021 – Liqid has requested that we take a look at their latest iteration of this product, which they say offers a much better performance profile than the unit they sent us last year. As we noted in this review, the card was definitely hampered by the older drives inside. We look forward to seeing what a more modern Honey Badger can do and will update here with new results when completed.