Shortly after AMD launched its latest generation of AMD EPYC 7003 processors, HPE announced several updates for support of the new CPUs. Amid this announcement, the company announced the HPE ProLiant DL385 Gen10 Plus V2 Server. The server is a 2U, dual-socket system with the ability to have up to 128 cores and 8TB of RAM depending on how you configure it. Its 2U footprint gives it more room for GPUs as well, eight single wide or three double-wides.

Shortly after AMD launched its latest generation of AMD EPYC 7003 processors, HPE announced several updates for support of the new CPUs. Amid this announcement, the company announced the HPE ProLiant DL385 Gen10 Plus V2 Server. The server is a 2U, dual-socket system with the ability to have up to 128 cores and 8TB of RAM depending on how you configure it. Its 2U footprint gives it more room for GPUs as well, eight single wide or three double-wides. 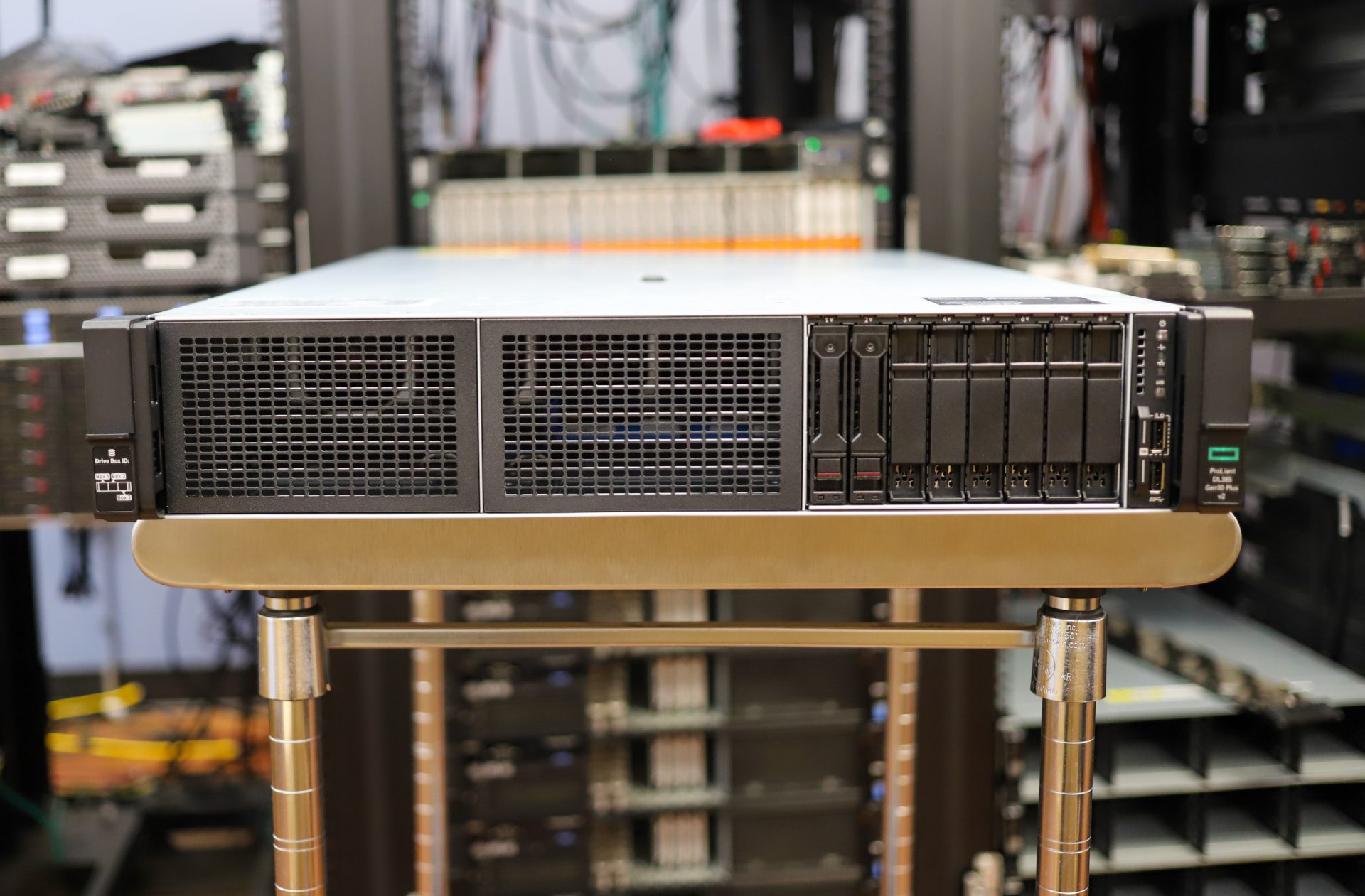 What is the difference between the DL385 Gen10 Plus and V2?

An astute reader will see that sneaky V2 on the end of the server’s name. So what is different between this version and the first version. The first version was announced back in 2018 at Computex. While it too was a 2U, dual-processor it supports AMD EPYC 7002 or second-gen CPUs. Version one supports up to 4TB of RAM. So, the V2 gives users support for the latest 7003 CPUs, all the benefits that come with that, and twice the memory footprint. 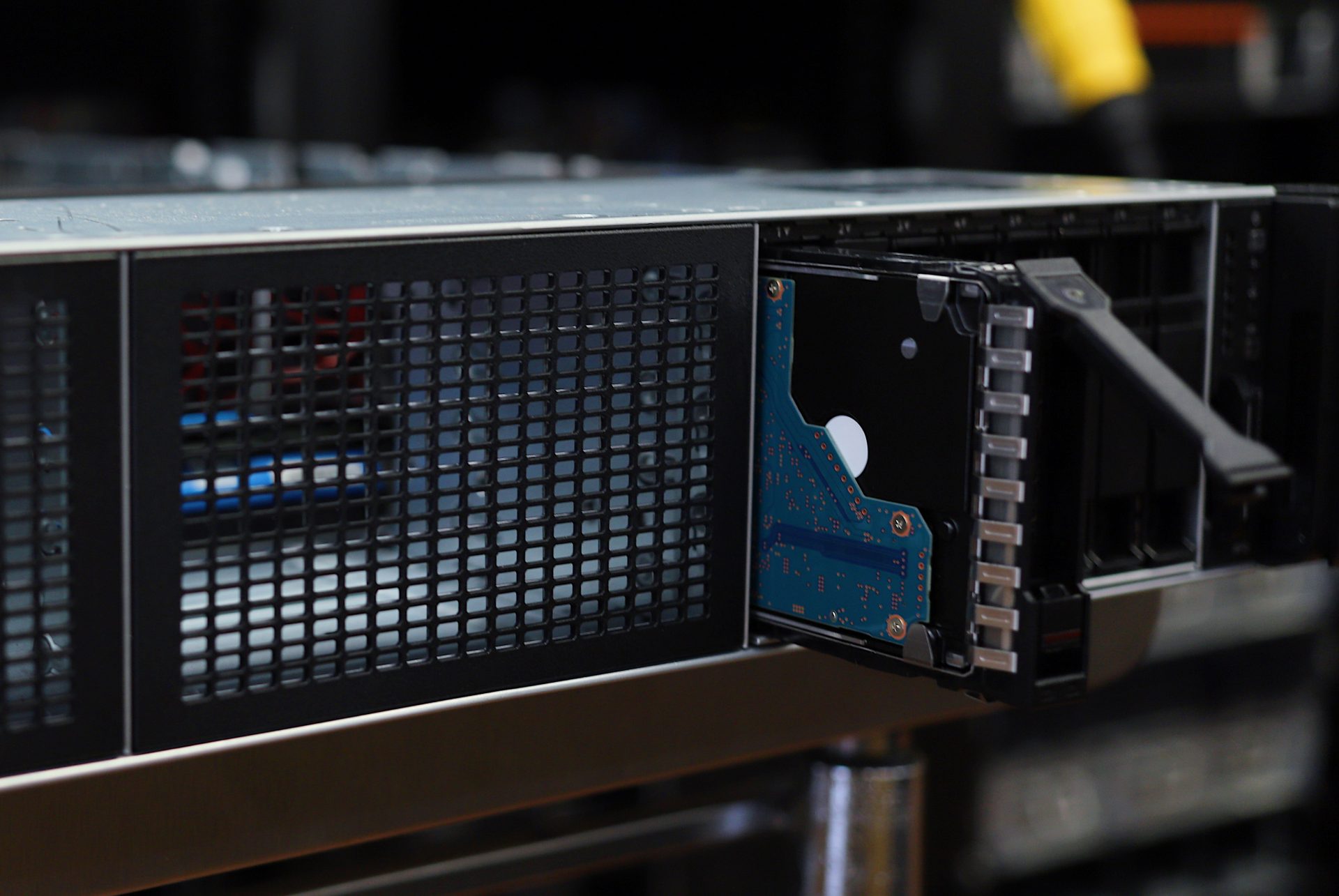 The DL385 sits on the higher end with the ability to add plenty of storage and GPU options. The two CPUs, more storage, and up to eight GPUs make it a better fit for AI, ML, and Big data Analytics.

For storage, users can configure the server to have up to twenty-four, 2.5″ drive bays in the front. The server leverages HPE’s Tri-mode strong controller meaning that it supports NVMe/SAS/SATA drives. Being a current-generation AMD server means that it supports PCIe Gen4 storage as well.

Like the rest of the line, the DL385 offers high security, automation, and remote management through the support of HPE Integrated Lights-Out (iLO). And the new server is part of the company’s as-a-Service suite including in HPE GreenLake.

As stated, the HPE ProLiant DL385 Gen10 Plus V2 is a 2U server that looks more or less like the rest of the ProLiant line. Across the front are the drive bays (depending on configuration but users can have up to 24). On the right, there is the power button, health LED, NIC status light, ID button, iLO front service port, a USB 3.1 Gen1 port, and a serial label pull tag. 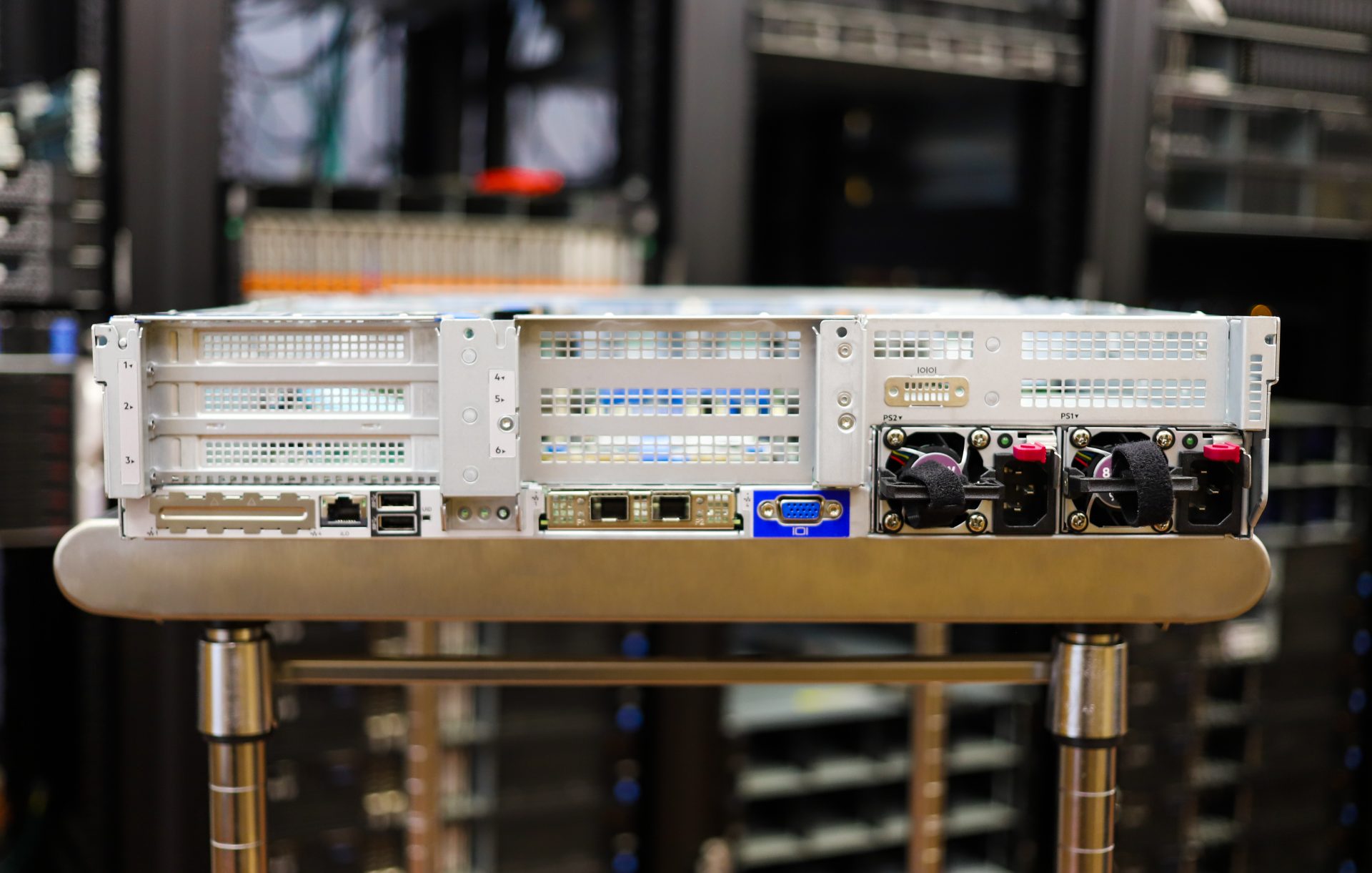 Flipping the server around to the rear we see that most of the device is dominated by expansion slots. On the right-bottom are the two PSUs. Going across the bottom from left to right is a dedicated iLO management port, two USB 3.1 Gen1 ports, ID LED, an OCP 3.0 slot, and a VGA connector. 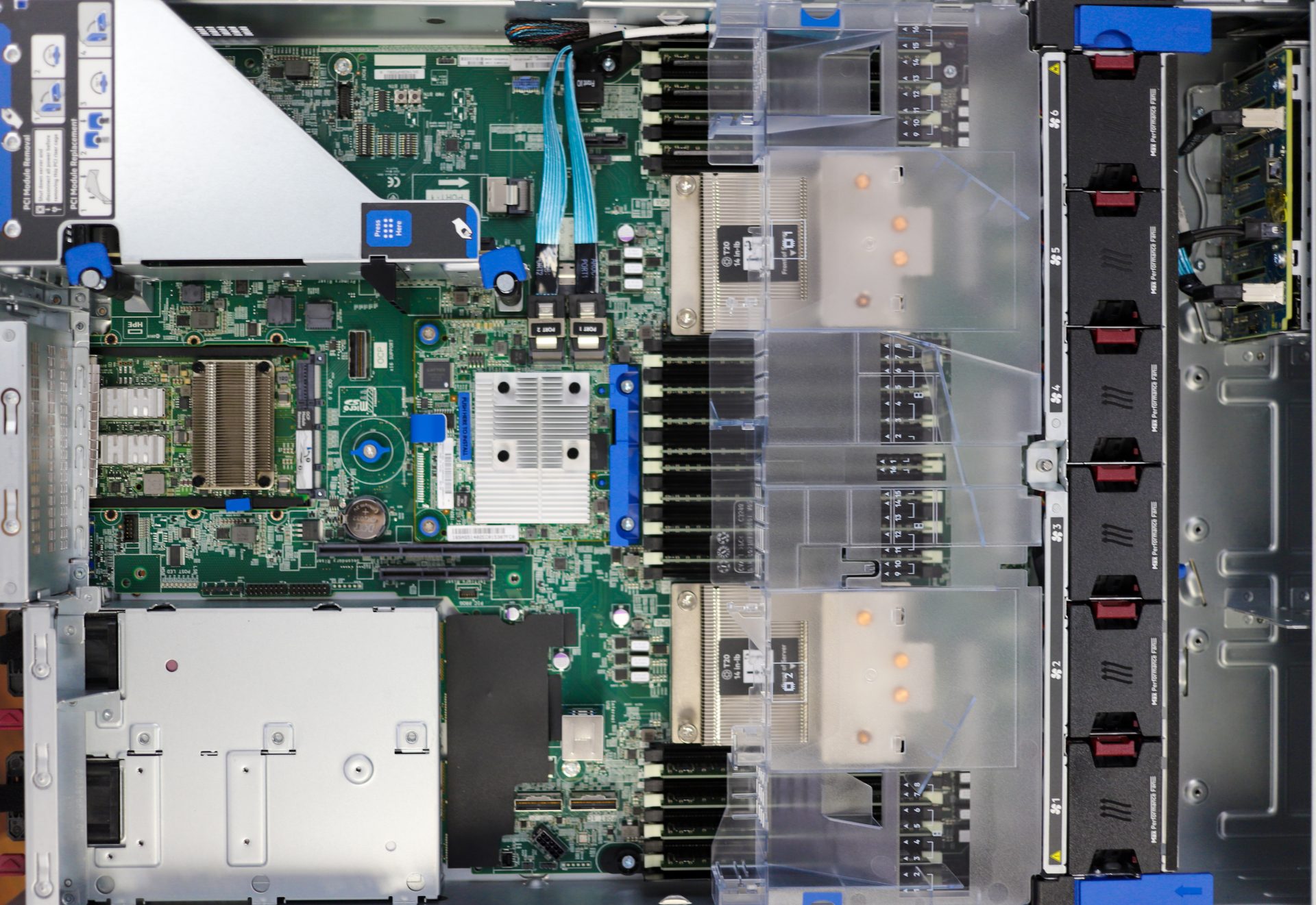 Through a handy latch on top, anyone can easily pop the lid off. Looking inside, the first thing that jumps out is the two CPUs in the center surrounded by the memory. The six hot-swap fans run across the server near the front. In the middle behind the RAM is the HPE Flexible Smart Array Controller. If you opted for both CPUs, there is a second riser connection near the controller. Near the back are the PCIe and OCP risers. 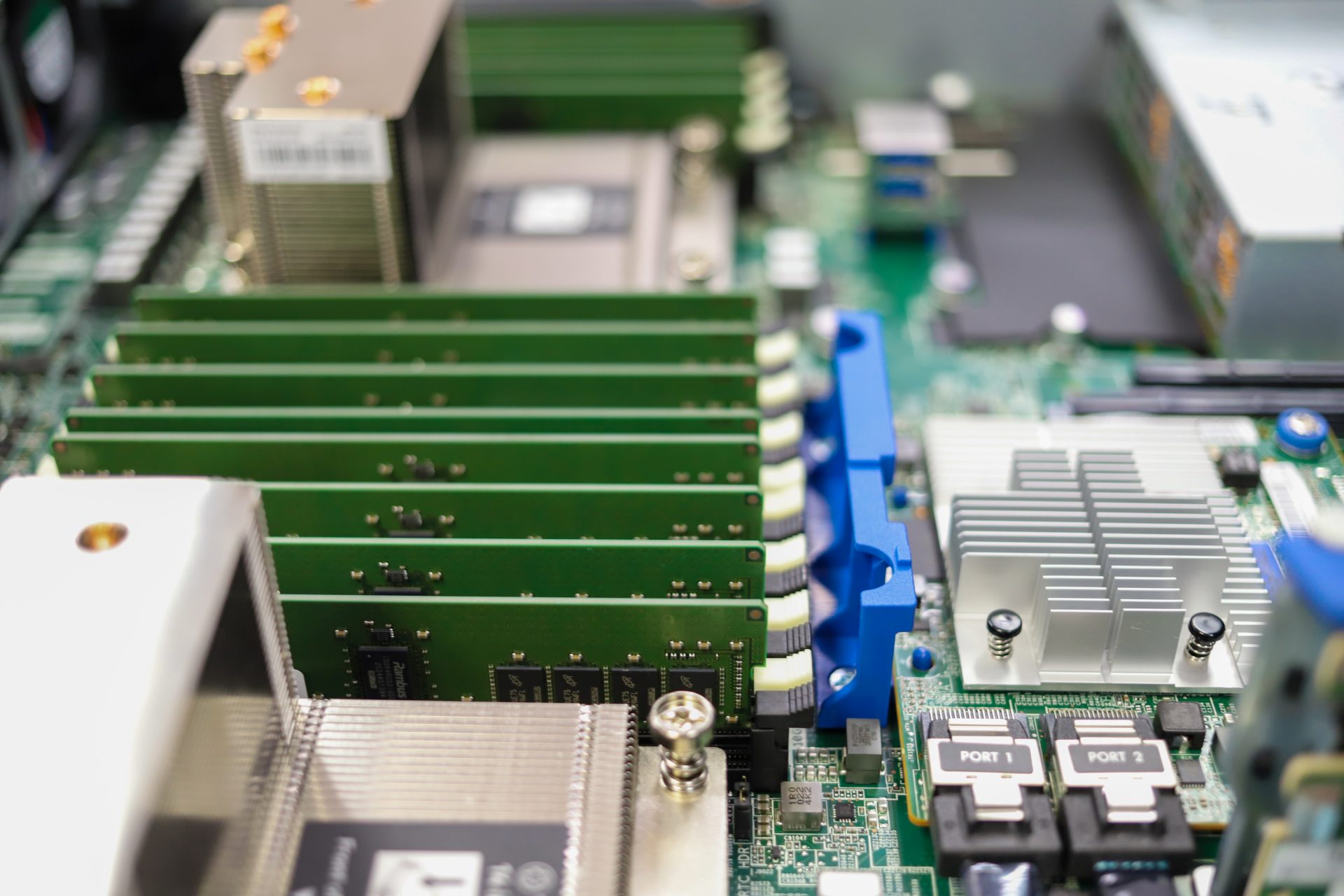 Similar to the HPE ProLiant DL385 Gen10 Plus, there are several drive configuration options. Aside from the commonplace 24 SFF across the front, users can go with 12 LFF (for high-capacity HDDs). If capacity is a greater concern than storage performance this would be a good way to go.

Let’s say one needs both high capacity, but still needs some storage performance. Users can set up 8 LFF across the bottom with 2 SFF on one side and a universal media bay, with an optical drive, on the other side.

A universal media bay with two SFF slots can be added to one of the three boxes in the front with either more SSDs or blank spots left. 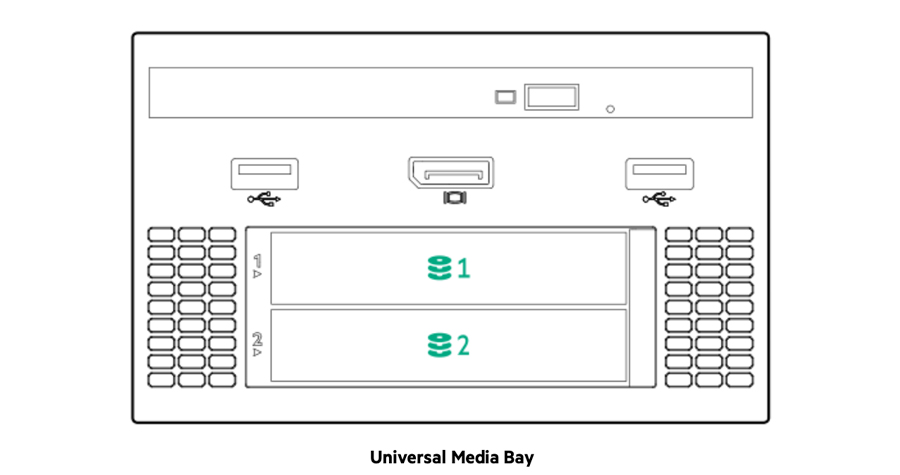 A midplane box can be added for 4 more LFF slots without taking up space in the front or rear. 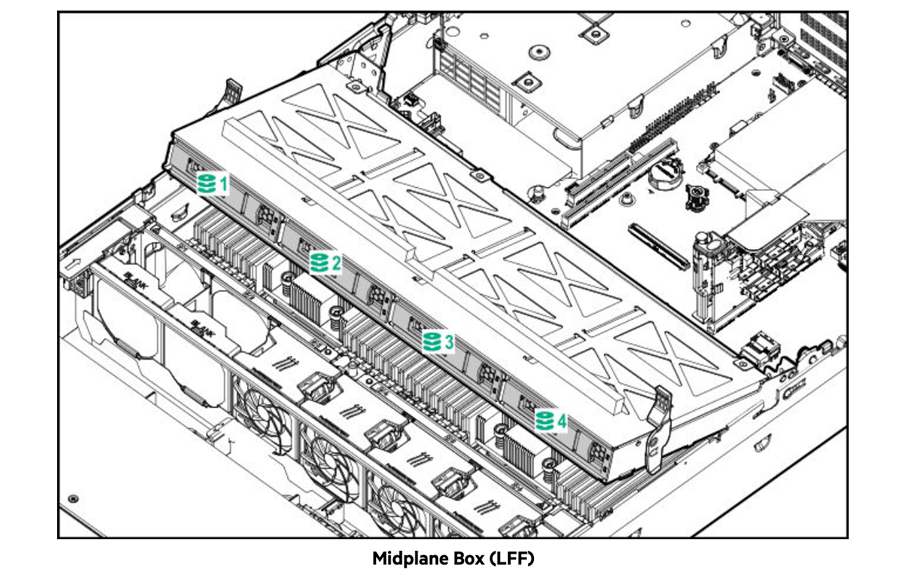 The rear expansion can be used for storage if GPUs are a high priority with either LFF or SFF.

It should be noted here that we received a pre-production unit. Also, the unit we have is limited to SAS storage, so this will look at how SAS performance and not quite have the whiz, bang, pow of our NVMe review.

When it comes to benchmarking storage arrays, application testing is best, and synthetic testing comes in second place. While not a perfect representation of actual workloads, synthetic tests do help to baseline storage devices with a repeatability factor that makes it easy to do apples-to-apples comparisons between competing solutions.

With 4K random write, the server gave us a peak of 285,942 IOPS with a latency of 11.1ms but ran at sub-millisecond latency performance for a bulk of our testing.

Switching over to sequential, we take a look at our 64K workloads. Here the sever started with sub-millisecond latency until about 30K IOPS or 1.5GB/s it went on to peak at 109,109 IOPS or 6.8GB/s at a latency of 2.34ms.

In SQL 80-20 we again see sub-millisecond latency performance throughout with a peak of 424,769 IOPS with 576µs for latency.

Next, we switched over to our VDI clone test, Full and Linked. For VDI Full Clone (FC) Boot, the DL385 hit a peak of about 145K IOPS at 1.5ms before dropping off some.

In VDI FC Initial Login the server gave us a peak of 56,818 IOPS at 4ms for latency before dropping off a bit.

VDI FC Monday Login saw a peak performance of 54,363 IOPS at 2ms before a drop in performance and a small spike in latency.

Next, we look at VDI Linked Clone (LC) tests. Starting with boot, the server had sub-millisecond latency until about 60K IOPS and peaked at 102,355 IOPS at a latency of 1.07ms.

Finally, for VDI LC Monday Login we saw a peak of about 33K IOPS at 3.1ms before dropping off some.

The HPE ProLiant DL385 Gen10 Plus V2 is a 2U server that leverages the AMD EPYC 7003 processors. This second version (V2) comes with the benefits of the latest CPUs as well as twice the RAM. The DL385 sits on the higher end of the scale of the newer EPYC-based servers with lots of storage and GPU options. The server can support up to 128 cores, up to 8TB of memory, up to 32 bays for storage (though enough options to make for both a high capacity and high-performance option), and up to eight GPUs, probably not all at once. This makes the server a good fit for AI, ML, and Big Data Analytics use cases. 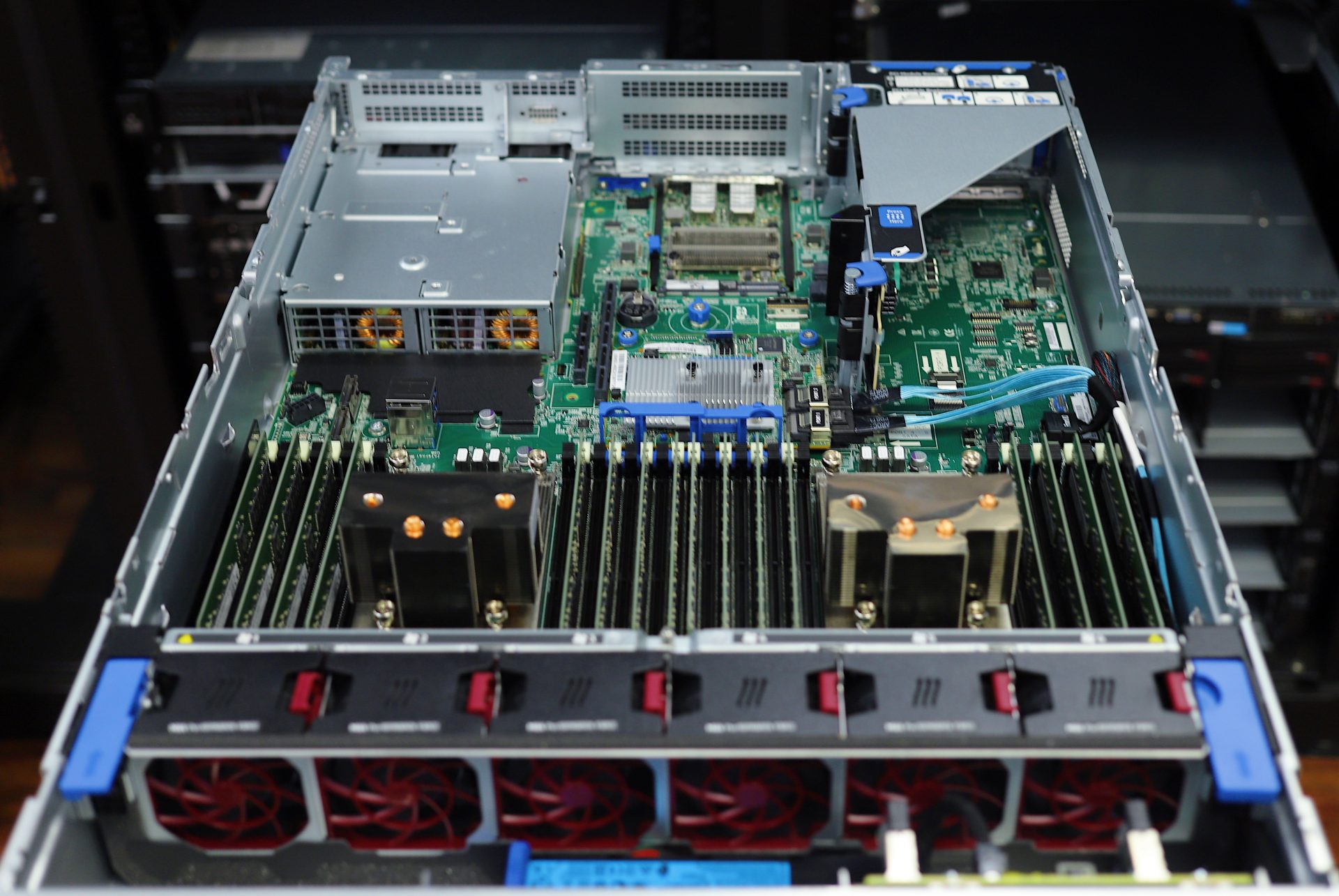 We tested a pre-production model, so we didn’t get the most high-performant options. In fact, we are using SAS drives here instead of the NVMe drive we typically test in the higher-end servers. That’s ok because not everyone needs the fastest storage in their server. Instead, we use our VDBench to show what SAS-based storage is capable of in the DL385. 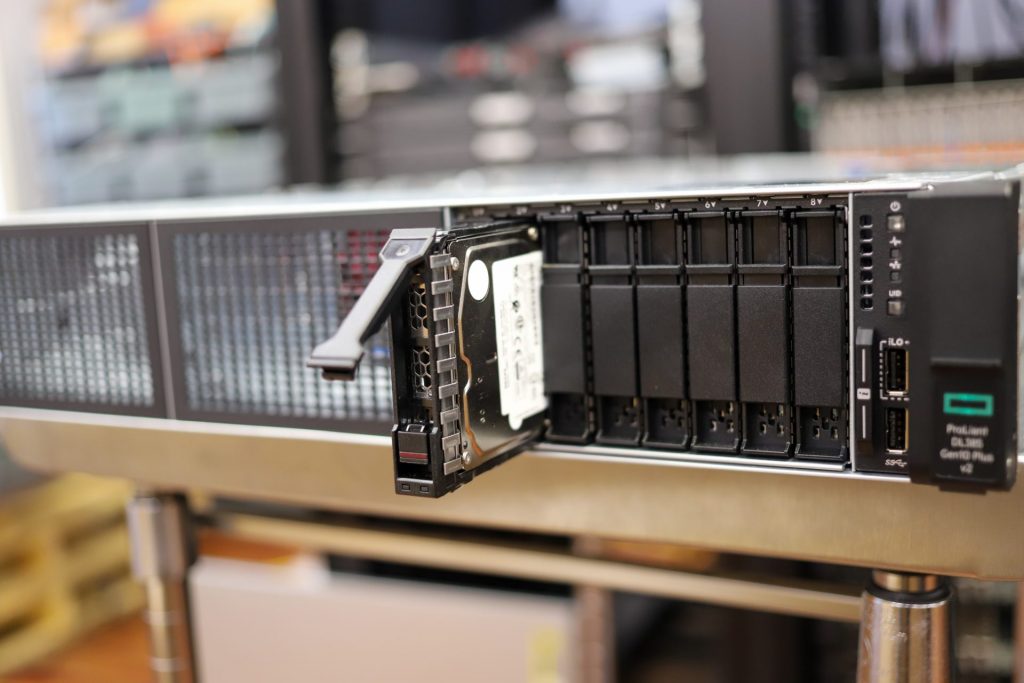 The HPE ProLiant DL385 Gen10 Plus V2 has the potential to be outfitted with very high-performance CPUs and a ton of RAM. On top of that, there are oodles of storage configurations and enough room for a slew of GPUs. This top-end server has lots of flexibility and a lot to love.