The NETGEAR ReadyNAS 626X is part of the company’s premium build NAS line designed for small growing businesses. Offering 6 drive-bays, the 626X can deliver a generous maximum storage capacity of 60TB and has the ability to scale up to 110TB using the company’s EDA500 expansion chassis. The 626X also offers comprehensive file sharing, backup, disaster recovery, and cloud options. The ReadyNAS 626X is equipped with an Intel Xeon Quad-Core (2.4GHz Xeon) Server Processor and 8GB of DDR4 RAM with error-correcting functionality to detect and correct the many types of internal data corruption. Netgear also supports a 10GbE add-on card for more intensive data needs.

The NETGEAR ReadyNAS 626X is part of the company’s premium build NAS line designed for small growing businesses. Offering 6 drive-bays, the 626X can deliver a generous maximum storage capacity of 60TB and has the ability to scale up to 110TB using the company’s EDA500 expansion chassis. The 626X also offers comprehensive file sharing, backup, disaster recovery, and cloud options. The ReadyNAS 626X is equipped with an Intel Xeon Quad-Core (2.4GHz Xeon) Server Processor and 8GB of DDR4 RAM with error-correcting functionality to detect and correct the many types of internal data corruption. Netgear also supports a 10GbE add-on card for more intensive data needs. 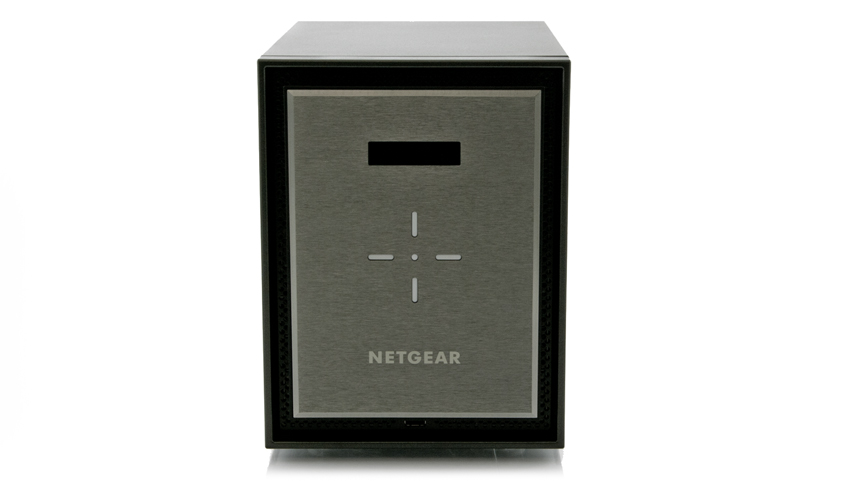 Backed by a 5-year warranty with next business-day hardware replacement, the Netgear ReadyNAS 626X starts at $1,800 for the diskless model.

The Netgear 626X is a unique-looking with a high-quality metal enclosure and silver-colored metal faceplate that acts as the drive door, making modern and stylish for an NAS. Surrounding the faceplate is ventilation.

On the front of the NAS there is a blue status and menu display screen, which is controlled by a set of backlit buttons (up, down, left, and right lines), with the circular OK button in the middle. For the novice user the unlabeled buttons take some time to get used to however. 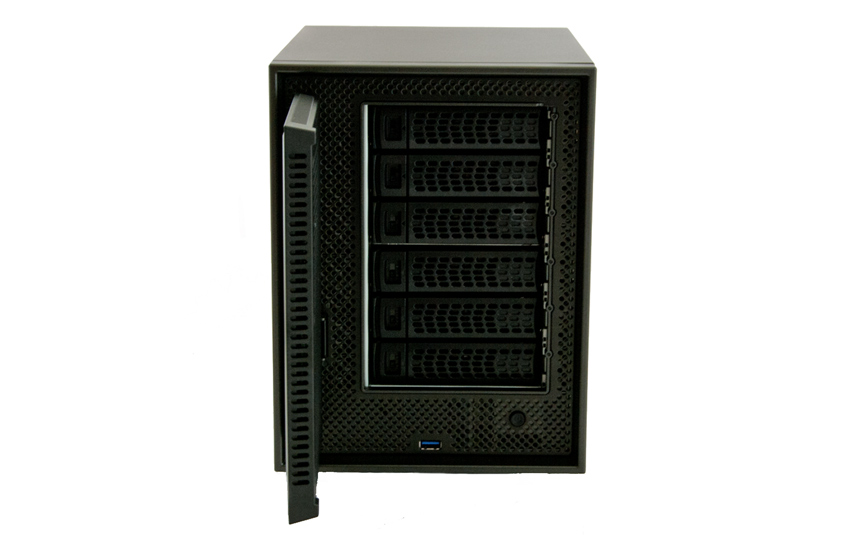 To access the drive bays and further connectivity and functionality, simply pull the drive door. Once opened, you will see the six drive bays stacked on top of each other, each of which have a release hatch, tray handle lock, and a disk status LED. Also behind the drive door is a USB 3.0 port and the power button at the bottom. 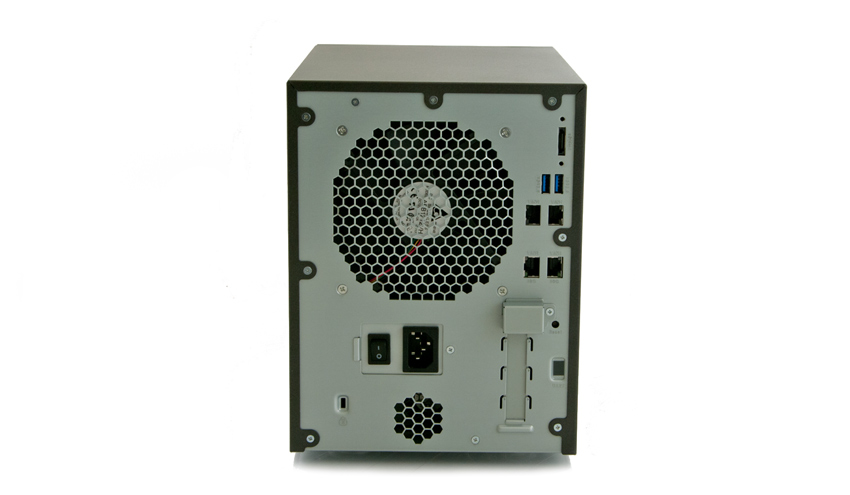 The back panel is host to most of the connectivity, including two 1GbE LAN and two 10GbE LAN ports (both with LED status indicators) as well as an eSATA port, two USB 3.0 ports, the power cable socket, and power switch. Also present is the reset button, ventilation for the system exhaust fan, and the Kensington lock.

The initial configuration of the ReadyNAS 626X is completed through ReadyCLOUD, Netgear’s online service that discovers and sets up the NAS storage systems on your network. Simply navigate to http://readycloud.netgear.com, click discover and go through the setup wizard. ReadyCLOUD can also be leveraged to access and manage data on the 626X. Once the NAS is setup, populated with drives, and connected to the local network, you will be able to manage it through ReadyNAS OS. Currently in version 6.6, this OS powers all ReadyNAS devices.

The main page (System>Overview) has general information about the device, how much capacity has been used, and the apps that are installed on the NAS. Across the top are tabs for System, Shares, iSCSI, Accounts, Network, Apps, Cloud, Backup, Admin password, Language, as well as help and refresh buttons.

The System tab has several sub tabs Overview (pictured above), Volumes, Performance, Settings, Logs, and Power. Volumes has a graphical representation (on the left hand side) of how much capacity has been used versus how much is still free. It also shows how man drives are populated in the NAS, their individual capacity, and the RAID type (RAID10 in this instance).

The Performance tab gives users both a current status of components such as HDDs, the CPU, the fan, and the System temperature as well as the performance of the volumes set up on the NAS. 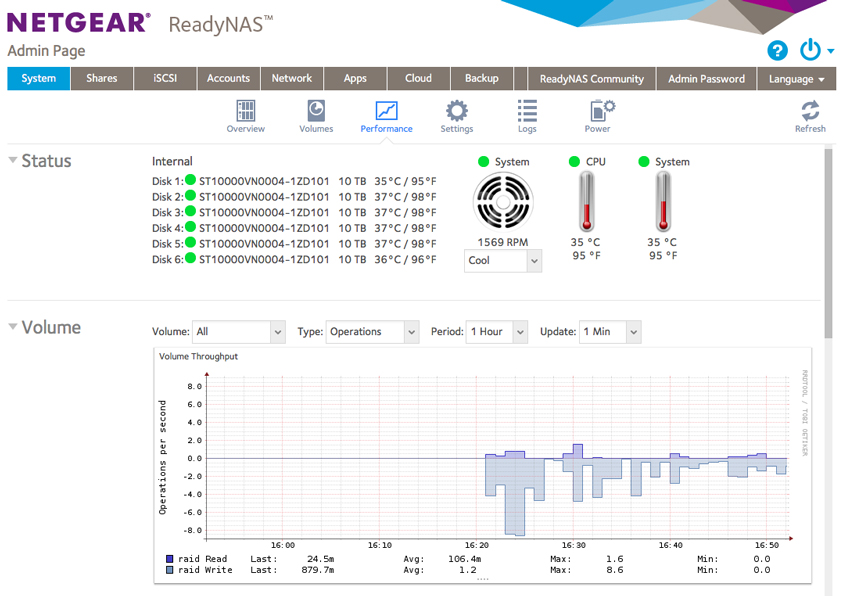 While the OS has been updated since our 212 review, the changes were not overall drastic and the core OS is still very similar. For a more in-depth look into the OS checkout the NETGEAR ReadyNAS 212 Review.

The ReadyNAS 626X is populated with Seagate IronWolf 10TB HDDs, for a total of 60TB of capacity. Consumers and businesses that chose to go with the diskless model can use their drives of choice; however, we recommend reading our Pick The Right Drive For The Job article, as desktop drives are not ideal in a 24/7 NAS environment.

We tested both CIFS and iSCSI performance using the RAID10 configuration and will be comparing it to the following NAS solutions and configurations:

Our first enterprise workload measures a long sample of random 4k performance with 100% write and 100% read activity. In throughput, the ReadyNAS 626X gave us 1,959 IOPS write and 345 IOPS read, when configured in iSCSI. During file-level CIFS connectivity, the NAS recorded 257 IOPS read and 1,991 IOPS write.

Looking at average latency, the 626X had the most consistent results (740.662ms read and 130.686ms write) when configured in iSCSI. Though the ReadyNAS had noticeably higher read latency in CIFS (994.82ms), it did have slightly better write results with 128.558ms.

In our max latency benchmark, the ReadyNAS 626X showed significantly better performance in iSCSI with 393.049ms and 166.54ms in read and write activity, respectively. In CIFS, the ReadyNAS hit a much higher 4,423.3ms read and 1,535.3ms write.

Compared to the fixed 16 thread, 16 queue max workload we performed in the 100% 4k write test, our mixed workload profiles scale the performance across a wide range of thread/queue combinations. In these tests, we span workload intensity from 2 threads and 2 queue up to 16 threads and 16 queue. Performance was noticeably better when the 626X NAS was configured in iSCSI, with a range of 283 IOPS to 494 IOPS; in CIFS, it posted a range of 255 IOPS to 318 IOPS.

Results told a similar story when looking at average latency, results were much more similar. Here, the 626X recorded a range of 14.08ms to 516.35ms when configured in iSCSI compared to CIFS’s range of 15.67ms to 800.65ms.

Looking at standard deviation, both iSCSI and CIFS results were near identical until the latter part of the benchmark. The Netgear NAS posted 24.23ms through 411.16ms in iSCSI, while ranging from 25.24ms to 632.26ms in CIFS.

Our last test in our small NAS Synthetic Workload testing is the 128k test, which is a large block sequential test that shows the highest sequential transfer speed. When looking at the 128k performance of 100% write and 100% read activity, the ReadyNAS 626X showed similar results in both CIFS and iSCSI with 462MB/s read and 435MB/s write, and 463MB/s read and 443MB/s write, respectively.

The Netgear ReadyNAS 626X is a dependable SMB NAS offering that will satisfy the needs of small businesses and home offices. It comes equipped with 6 drive bays and supports upwards of 110TB in storage when leveraging the Netgear expansion chassis. For those who believe that looks matter, the 626X certainly fits that need: it sports a unique, premium build with a slick looking silver faceplate, allowing the NAS to sit nicely alongside any workstation and out in the open. The 626X also features comprehensive and easy-to-use management software through the ReadyNAS OS.

The ReadyNAS 626X is comes well equipped with enterprise-minded components as well. Under the hood lie an Intel Xeon Quad-Core (2.4GHz Xeon) Server Processor and 8GB of DDR4 ECC RAM. This allowed it to perform well during our extensive benchmark tests. For example, during our long sample of random 4k performance (100% write and 100% read activity), we measured the 626X with 1,959 IOPS write and 345 IOPS read when configured in iSCSI, while CIFS connectivity recorded 257 IOPS read and 1,991 IOPS write. In 100% 8k sequential throughput, the ReadyNAS 626X posted 57,363 IOPS read and 49,714 IOPS write, and 57,148 IOPS read and 49,364 IOPS write during iSCSI and CIFS, respectively. Moreover during our mixed workload profiles, the 626X boasted a range of 283 IOPS to 494 IOPS in the terminal queue depths in iSCSI, while posting a range of 255 IOPS to 318 IOPS in CIFS. In our last benchmark (a large-block 128k sequential test), the ReadyNAS 626X showed strong performance in both CIFS and iSCSI: 462MB/s read and 435MB/s write, and 463mb/s read and 443MBs write, respectively.

With its premium build and solid performance, the ReadyNAS 626X offers small businesses and home office an easy-to-use NAS solution that can scale as needed.