There are times when users may end up with several HDDs with data on them that needs to be gone through. HDDs are still fairly cheap and can pack massive amounts of capacity. This is great for creative professionals or others that may deal with a rotation of bare drives, portable drives, or larger desktop enclosures. If you need a quick and cost-effective method for going over what is on your excess drives, Orico has a couple of solutions that are just perfect for this: the Orico BT2U3-10AB multi-port USB hub and the Orico 3588US3-V1 HDD Enclosure.

There are times when users may end up with several HDDs with data on them that needs to be gone through. HDDs are still fairly cheap and can pack massive amounts of capacity. This is great for creative professionals or others that may deal with a rotation of bare drives, portable drives, or larger desktop enclosures. If you need a quick and cost-effective method for going over what is on your excess drives, Orico has a couple of solutions that are just perfect for this: the Orico BT2U3-10AB multi-port USB hub and the Orico 3588US3-V1 HDD Enclosure. 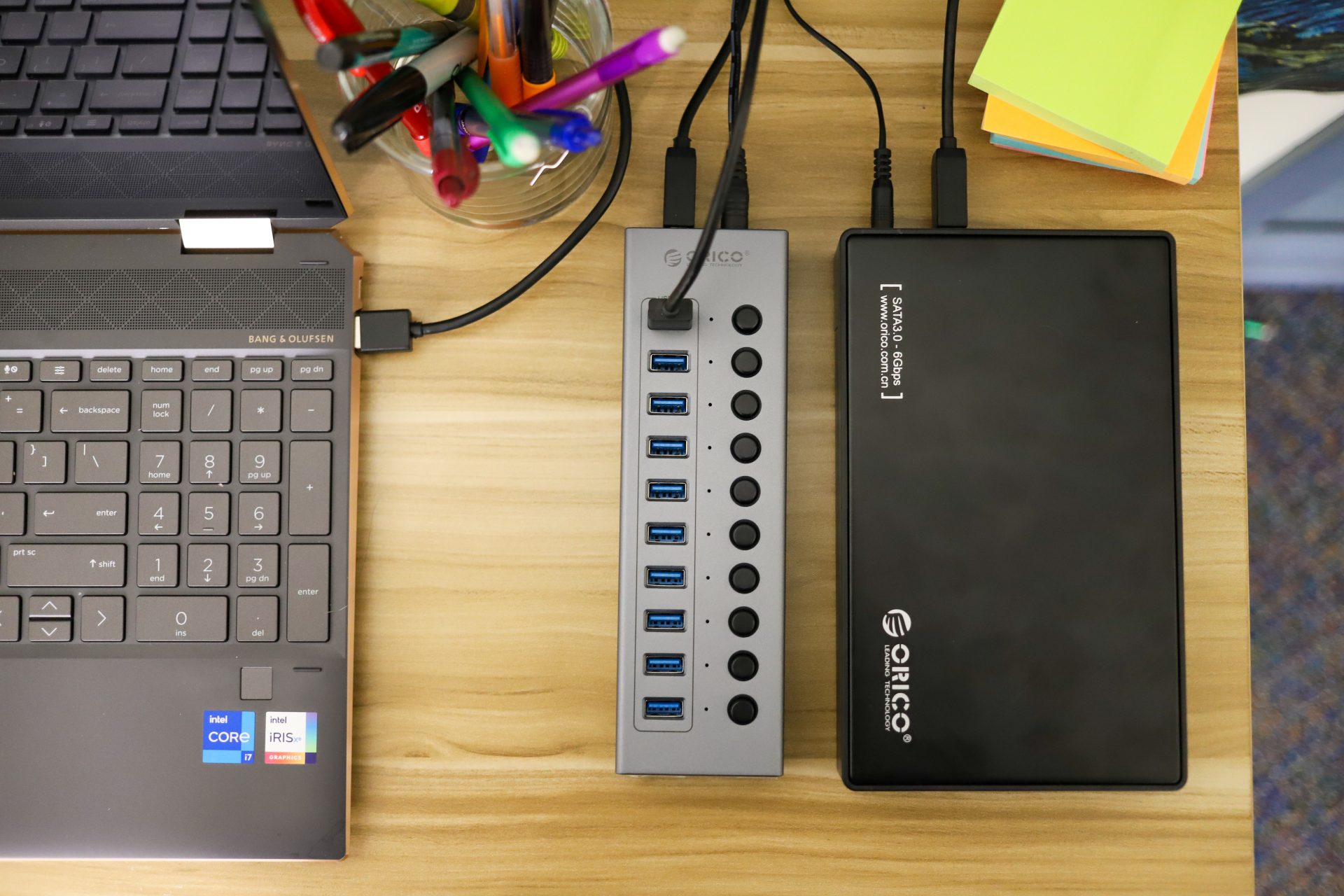 While there are several ways to hook HDDs up to a computer they can be expensive or take up a lot of room. Look at our Sabrent DS-SC5B review. While not terribly expensive, this unit was heavy and was more of a permanent fixture, which is a good option if you want something long-term. If you are limited on space and budget or deal with a lot of media that rotates through your workflow, the combination of the two Orico devices makes for a fast and temporary setup that can be brought out when needed. 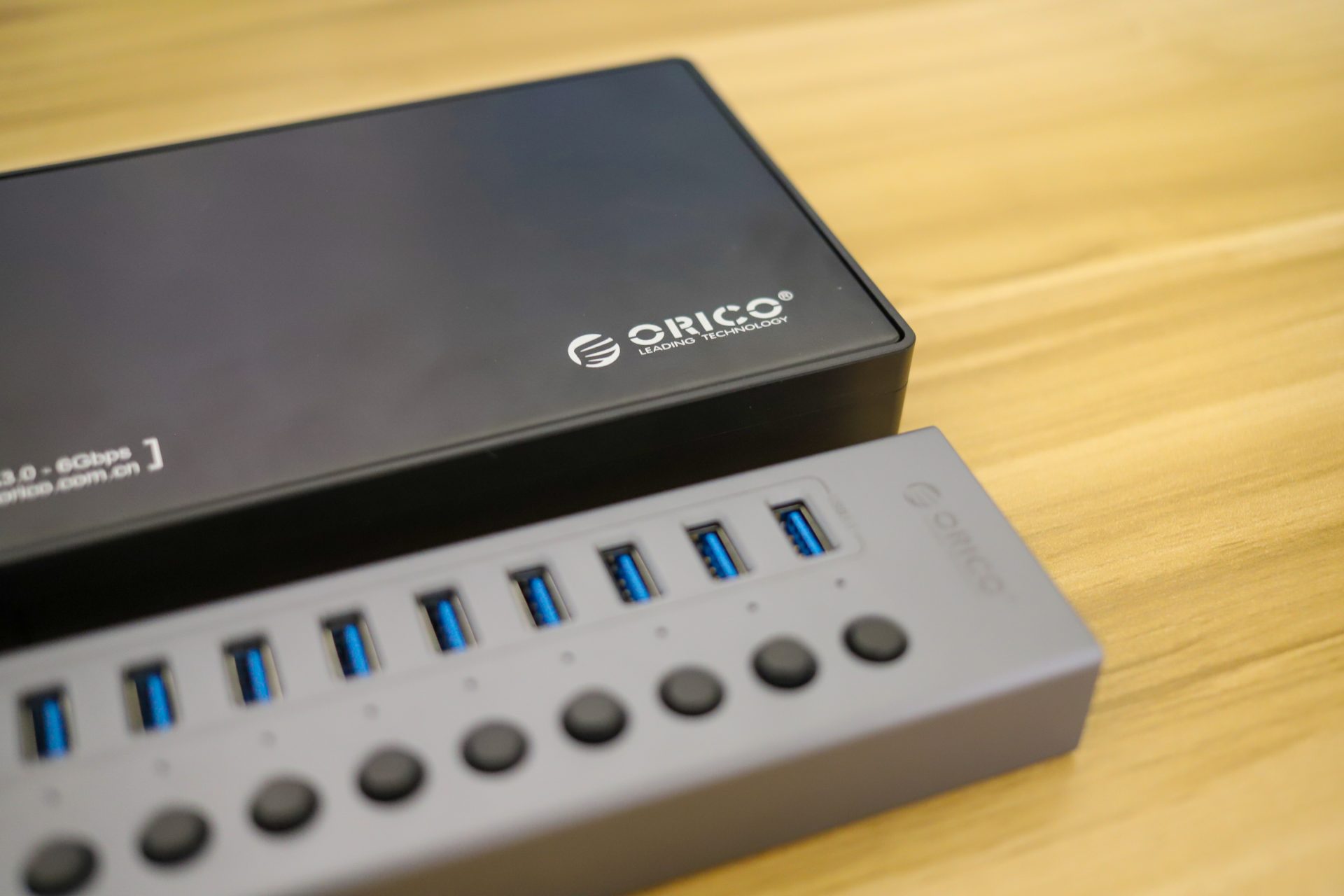 There are other use cases as well. Proof of space cryptocurrencies for instance. Those that host a lot of bulk storage like Chia farmers, typically do so on HDDs. Hard drives are still a bit scarce though. Farmers are often cobbling together an array of portable drives, a mish-mash of loose HDDs, and even some single drive external enclosures, depending on what’s available. With the Orico Multi-port hub, you gain a ton of flexibility for this type of use case.

The Orico BT2U3-10AB is a multi-port hub with 10 USB-A ports running across the top. Each bay has a bottom that can be pressed to turn that port on. On one end is the power and USB connection to a computer. The other sides are blank.

From an aesthetics point of view, the thing is neither neat nor bad looking. It is an off-gray similar to what one would see in a Dell or HP mobile workstation. Though this is definitely a function over form type of device. If you can get the cords and cables laid out in a pleasing manner, it doesn’t take up too much space or look too strange on a desk. 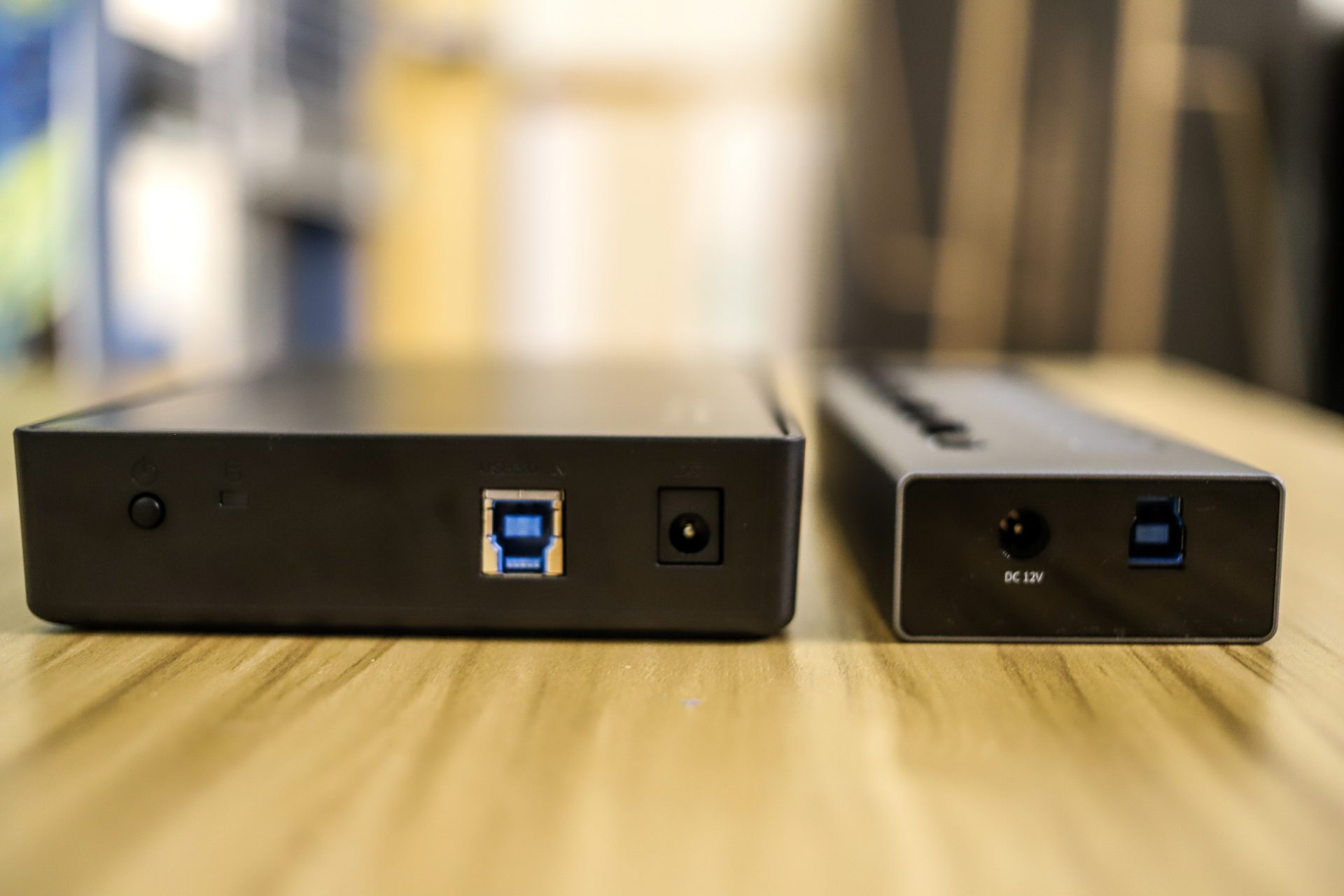 The ORICO 3588US3-V1 is a big, black hunk of plastic. There is a power connection and USB connection on one side along with the power button and indicator light. One side has the Orico branding and notes the interface. 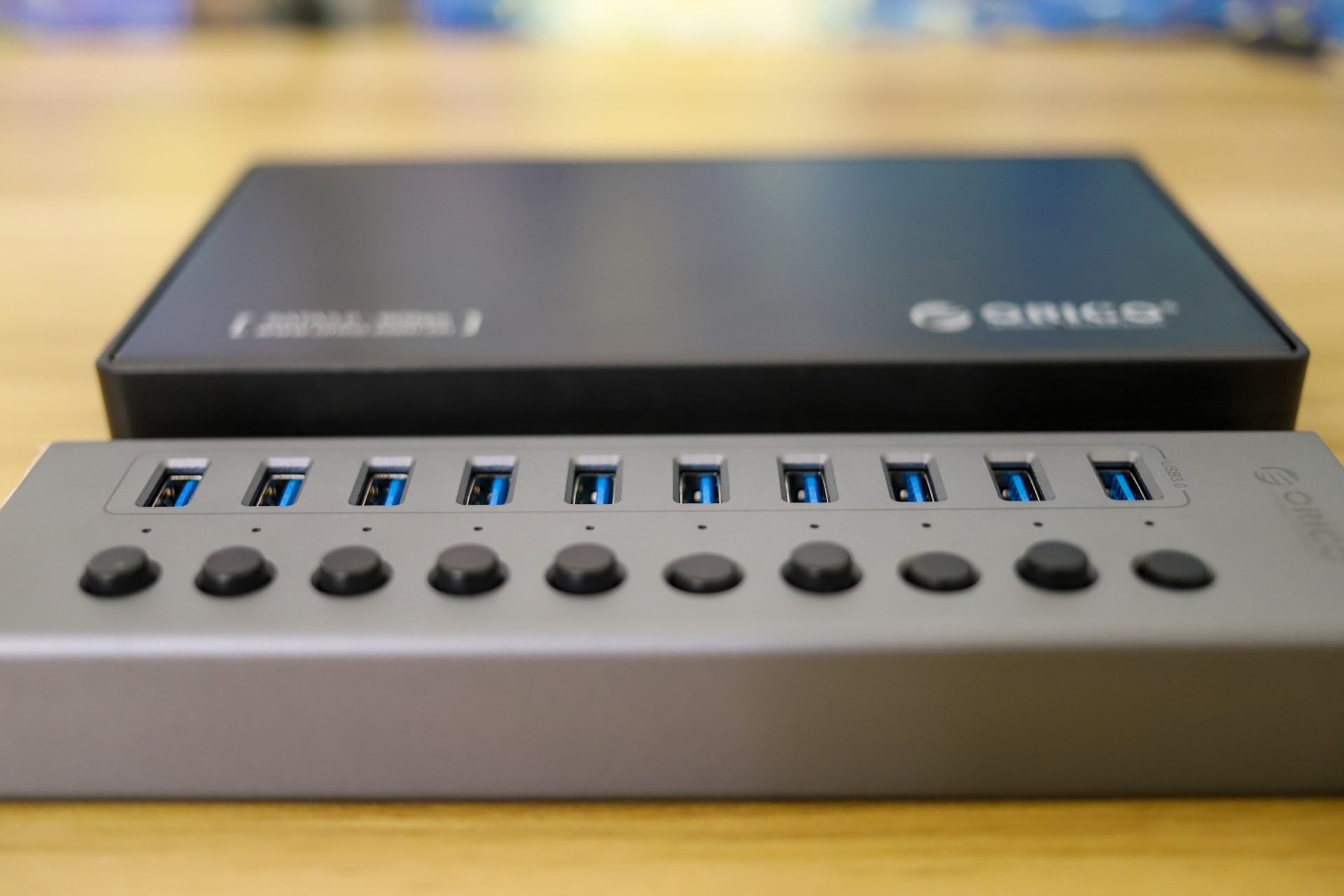 On the other side is a cover that slides off and allows users to add SATA-based drives. All in all, pretty simple layout. This is not the most pleasing thing to the eye, however. But if you can tame the cords and cables it doesn’t take up too much room. If you plan on deploying several of these, a little shelf on the desk is probably a good investment to stay organized and looking good.

It took less than five minutes from opening the packages to have HDDs connected to a laptop. I never bothered with the instructions because looking at it, it was very simple to see how it all went together. Each 3.5″ component needs its own power source so that is something to contend with and ensure you have enough power to get everything started. That said, 2.5″ HDDs and portable SSDs will work just fine with the power supplied from the USB strip, so there are options to reduce cable clutter. 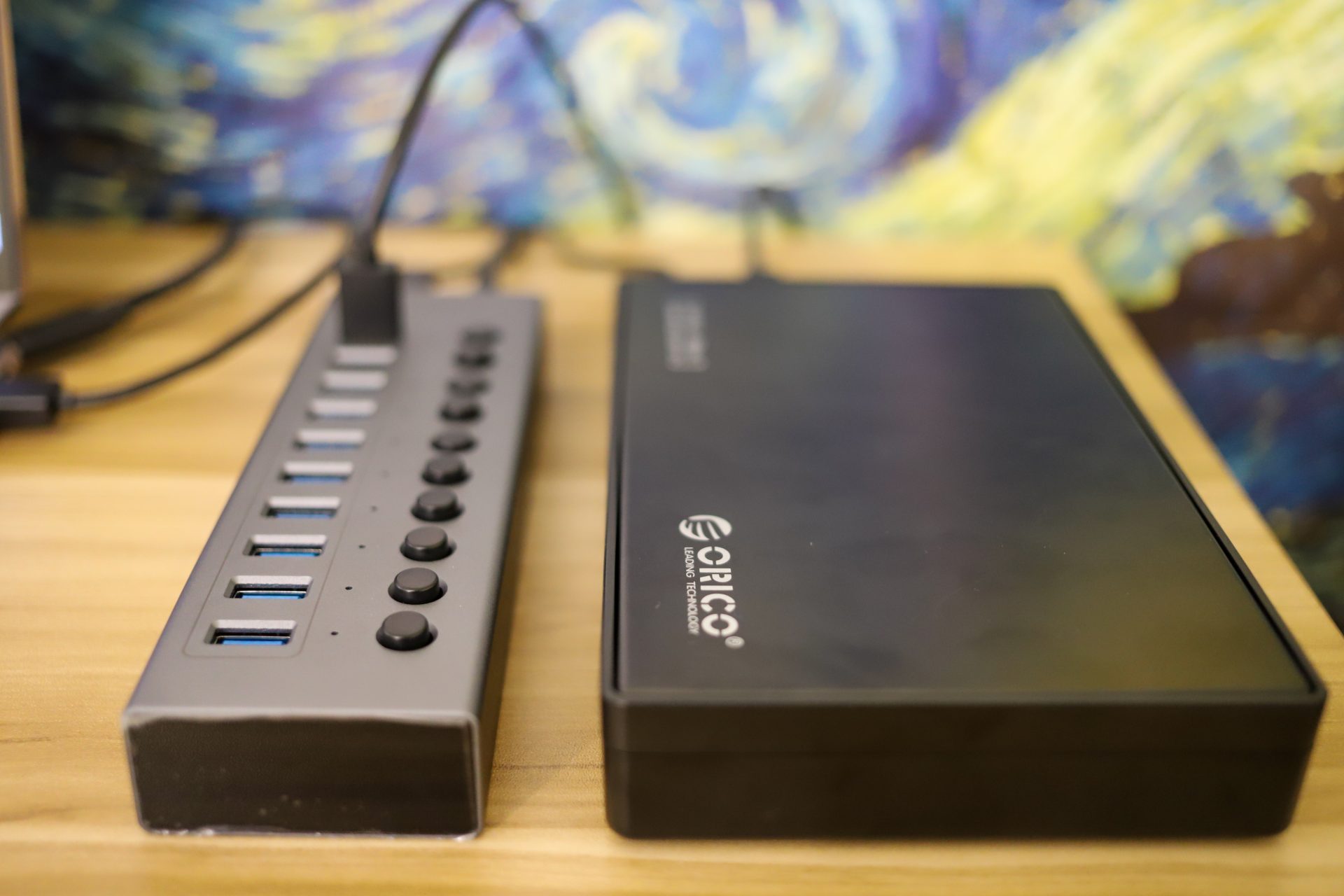 Once the hub is connected, one can start plugging in the drive bays. Once everything has power, you can connect the hub to a computer and you are ready to move files. This makes a quick and easy way to go through old HDDs or transferring media onto your current workstation.

Performance is wholly dependent on the type of drive leveraged. Just to give readers an idea we ran Blackmagic on our Lenovo P1 Gen 3. We used a legacy WD Black Se 1TB HDD. The drive several years old, but one of the use cases for these devices is going through older drives to see what is on them or using whatever you can find for temporary storage.

Blackmagic gave us 172.9MB/s read and 170.9MB/s write. Which is about in line for that drive. That’s what we’d expect to see from devices like these, but with lesser accessories, we do at times see oddball performance issues. 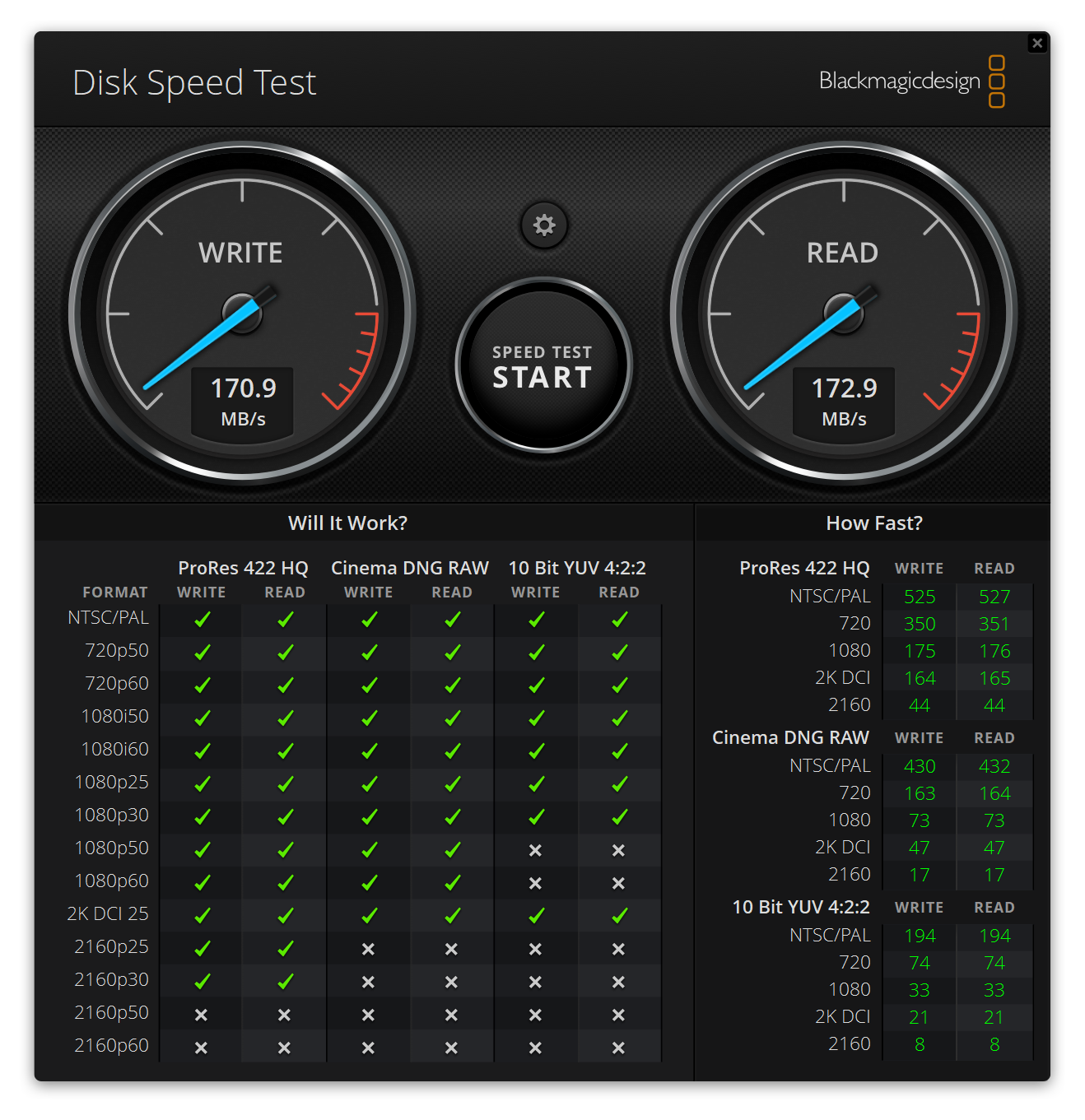 Whether you have several old drives you need to go through or you are a creative professional with large media files on several drives, Orico has a couple of devices for you. The Orico BT2U3-10AB multi-port USB hub adds up to 10 USB ports to your computer. Combine that with the Orico 3588US3-V1 HDD Enclosure and you can quickly and cost-effectively add 10 external HDDs to your system. Of course, this works with portable drives and flash drives as well, should you have these smaller devices.

The setup was super simple. Get power, plug the hub into power and to a computer, and then hook up your USB devices. There are dedicated power buttons to press for each port on the hub. The only downside is that each 3.5″ HDD enclosure will need its own power source (this isn’t specific to this device, they are all like that). While you can use SATA SSDs or 2..5″ HDDs in the enclosure as well, there are better options for that task that Orico also provides.

To validate performance, we tested an old WD Black Se HDD on a Lenovo P1. We saw read and write about 170MB/s, which is what we expected for that particular drive.

Orico makes lots of neat add-on devices and accessories and these two are no different. Combining the Orico BT2U3-10AB multi-port USB hub and Orico 3588US3-V1 HDD Enclosures makes for a cost-effective way to access storage that may not be a permanent fixture in your workspace.