The Kingston DC1500M is the company’s latest U.2 data center NVMe PCIe SSD specifically designed for cloud providers, hyperscale data centers, and enterprise-level IT on-premise servers. The DC1500M is an affordable enterprise SSD, making it an ideal solution for organizations looking to move from SATA/SAS SSDs to NVMe in order to leverage the interface’s much faster data transfer speeds and lower latency. The DC1500M uses the Gen 3.0 x4 interface and is available in capacities ranging from 960GB to 7.68TB.

The Kingston DC1500M is the company’s latest U.2 data center NVMe PCIe SSD specifically designed for cloud providers, hyperscale data centers, and enterprise-level IT on-premise servers. The DC1500M is an affordable enterprise SSD, making it an ideal solution for organizations looking to move from SATA/SAS SSDs to NVMe in order to leverage the interface’s much faster data transfer speeds and lower latency. The DC1500M uses the Gen 3.0 x4 interface and is available in capacities ranging from 960GB to 7.68TB. 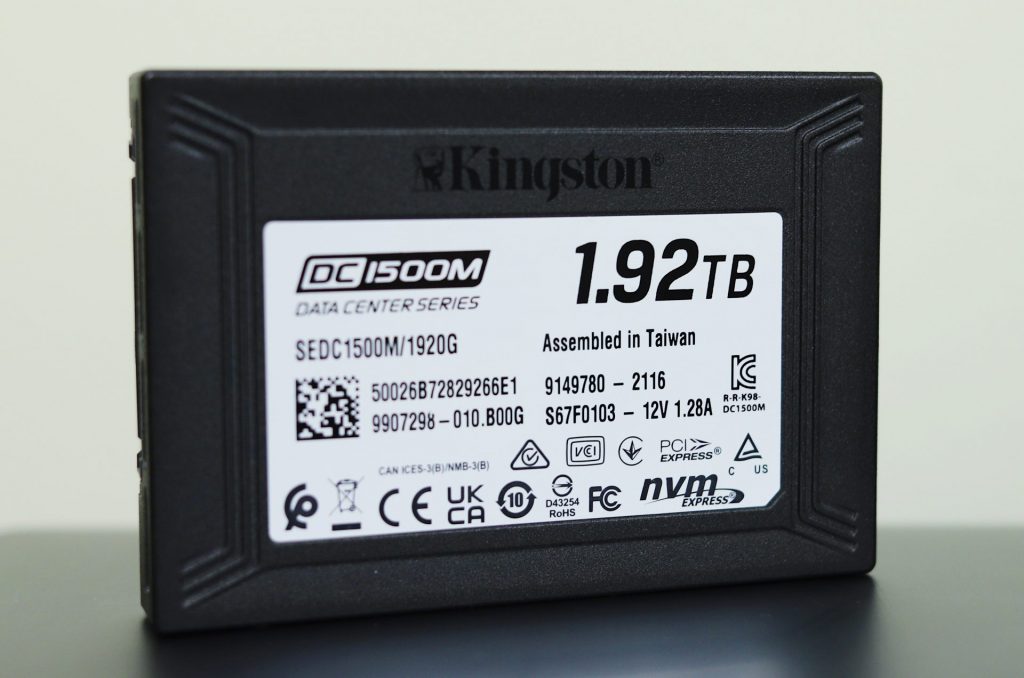 The Kingston DC1500M drive comes with a range of advanced enterprise-class features that help to enhance long-term performance in high-availability environments. Highlights include end-to-end data path protection to ensure the integrity of data transfer, multiple namespace management to prevent naming collisions, power loss protection (or PLP) to prevent data corruption during unplanned power loss, and telemetry monitoring for remote SSD monitoring. Kingston has also made endurance and long-term performance a focus with the new DC1500M, as it features 1 DWPD for five years, and 1.6 DWPD for 3 years.

The Kingston DC1500M is a direct replacement of the DC1000M, a drive released in Summer 2020 that offered good performance, capacity, and value for a range of different use cases.

There are some noteworthy improvements to the DC1500M over its predecessor. For example, the new Kingston drive now supports up to 64 namespaces, an increase that will benefit those who have NVMe SSDs shared across multiple systems or devices. The DC1500M also features the new SMI2270 16-channel controller (which supports independent multiple namespace I/O queues), BICs4 TLC NAND (a move from BiCs3), and onboard Nanya DDR4.

As far as performance goes, Kingston quotes the DC1500M to deliver consistent read and write latencies of less than 110 µs and 206 µs, respectively. For sequential speeds, the Kingston drive is expected to reach up to 3.3GB/s read (1.92TB model) and 2.7GB/s write (all but the lowest capacity model). Random 4K reads and writes are expected to hit up to 510,000 IOPS and 220,000 IOPS (1.92TB model), respectively. 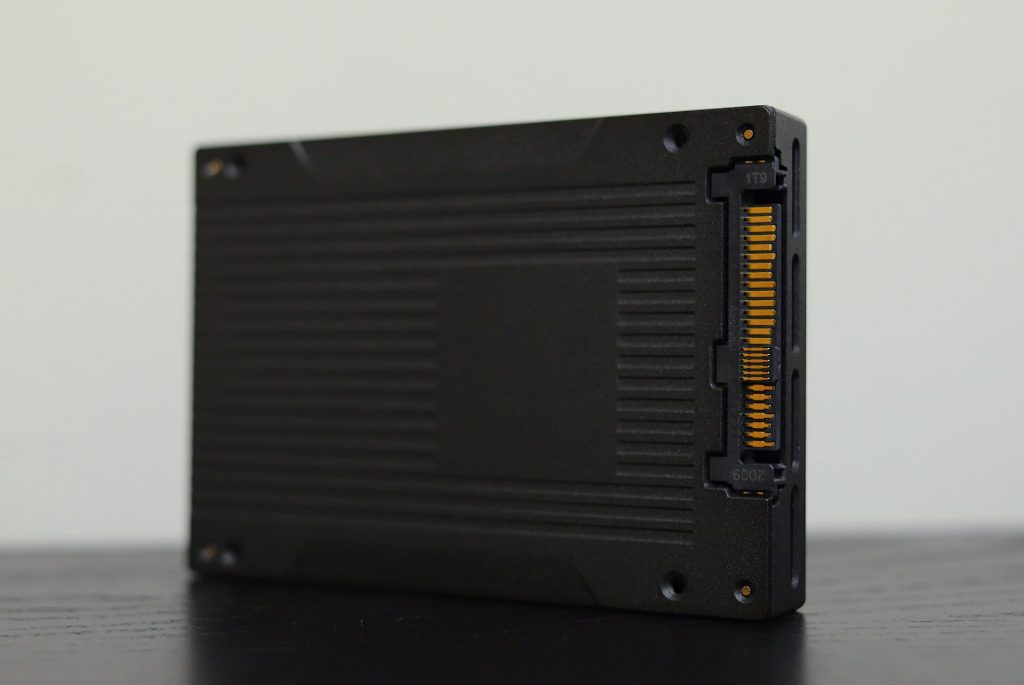 Here, the Kingston DC1500M showed 2,810.0 seconds, results that landed it right in the middle of drives tested (including a decent improvement over the DC1000M). 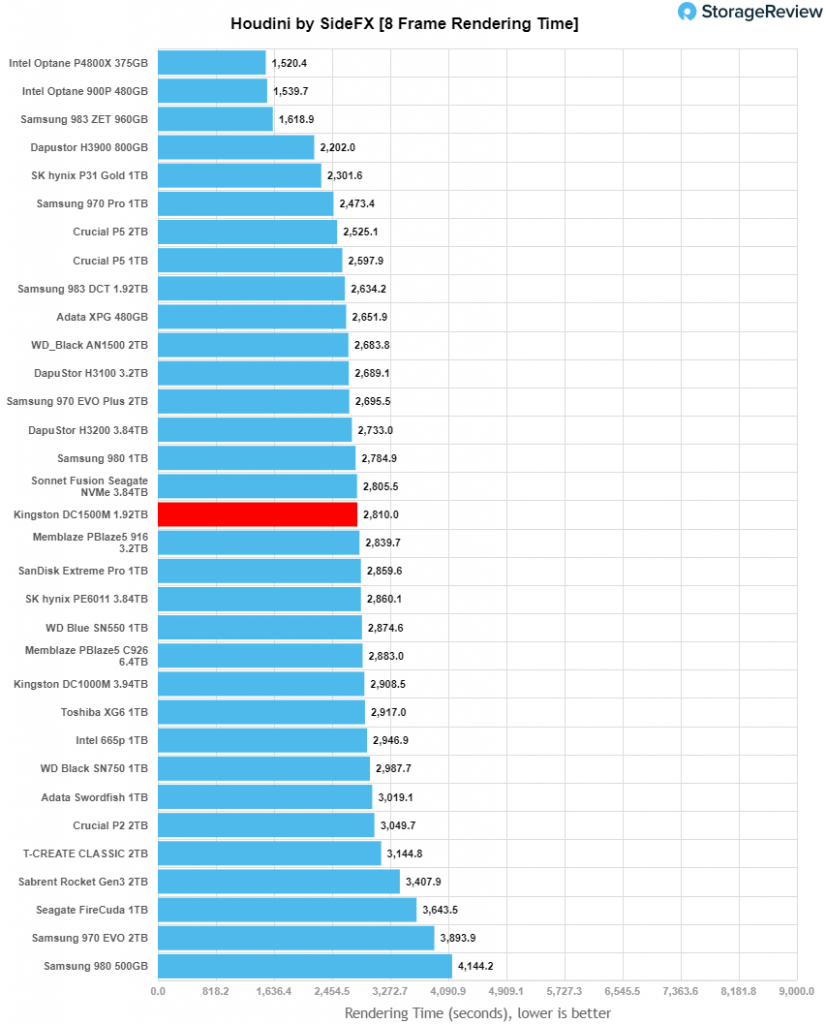 In order to understand the performance characteristics of enterprise storage devices, it is essential to model the infrastructure and the application workloads found in live production environments. Our benchmarks for the Kingston DC1500M include the MySQL OLTP performance via SysBench and Microsoft SQL Server OLTP performance with a simulated TCP-C workload. For our application workloads, each comparable drive will be running 4 identically configured VMs.

Looking at our Sysbench transactional benchmark, the DC1500M had 5,218.4 TPS, placing it at the bottom of the leaderboard. 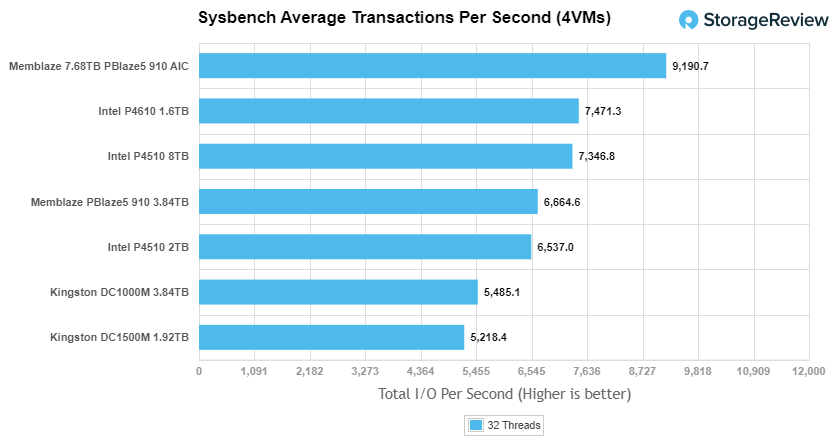 With Sysbench average latency the DC1500M posted 24.53ms, again placing it in last among the comparables. 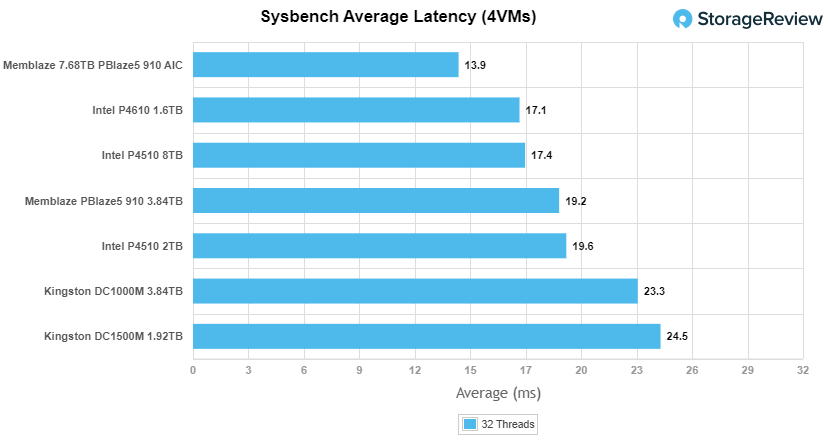 For our worst-case scenario latency (99th percentile) the DC1500M showed 49.03, though this time it had slightly better results than the DC1000M. 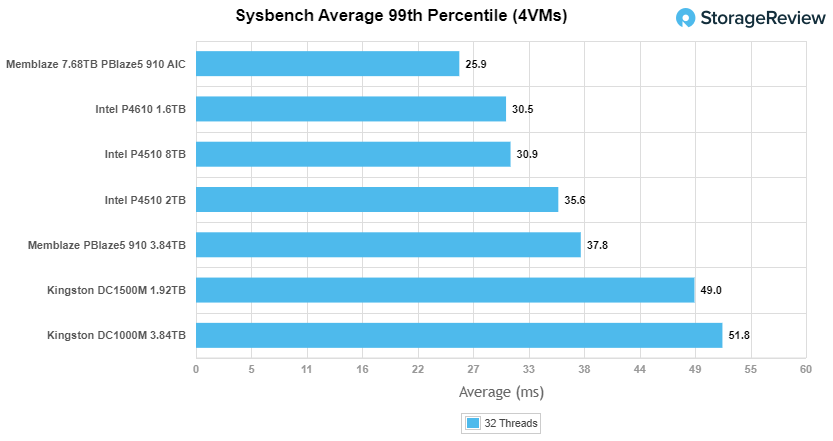 In our first VDBench Workload Analysis, Random 4K Read, the Kingston DC1500M trailed the rest of the comparables (including the DC1000M) with a peak performance of 556,628 IOPS at a latency of 228.8µs.

4K random write gave us showed us much better results, as the DC1500M took the top spot with a peak performance of 323,463 IOPS at a latency of 390.2µs before dropping off slightly at the end and right next to the DC1000M).

Our next set of tests are our SQL workloads: SQL, SQL 90-10, and SQL 80-20, all of which showed the DC1500M with a slight improvement in performance over the previous-gen model. Starting with SQL, the new Kingston drive landed second (just behind the Memblaze and right beside the Samsung) with a peak performance of 210,980 IOPS at a latency of 150.4µs.

Next up are our Oracle workloads: Oracle, Oracle 90-10, and Oracle 80-20. Like with the SQL benchmarks, the new Kingston drive showed just slightly better performance than the DC1000 in all categories. Starting with Oracle, the DC1500M took second (though well back of the Memblaze 910) with a peak performance of 168,419 IOPS at 214.2µs.

Next, we switched over to our VDI clone test, Full and Linked. For VDI Full Clone (FC) Boot, the Kingston DC1500M remained in its usual second place with a peak of 149,424 IOPS at a latency of 228.7µs, which was slightly better than the DC1000M.

VDI LC Initial Login saw the Kingston fall back again to fourth with 28,288 IOPS at a latency of 280.3µs.

The Kingston DC1500M is the next iteration of the company’s budget-friendly NVMe SSD line for data centers. It is the successor to the DC1000M, a drive that we found worked as a great replacement for SATA or SAS drives for organizations looking for a performance boost at an affordable price. Offering a modest improvement over the previous model, the DC1500M more or less targets the same use cases. It comes in a U.2 form factor and is available in capacities ranging from 960GB to 7.68TB. 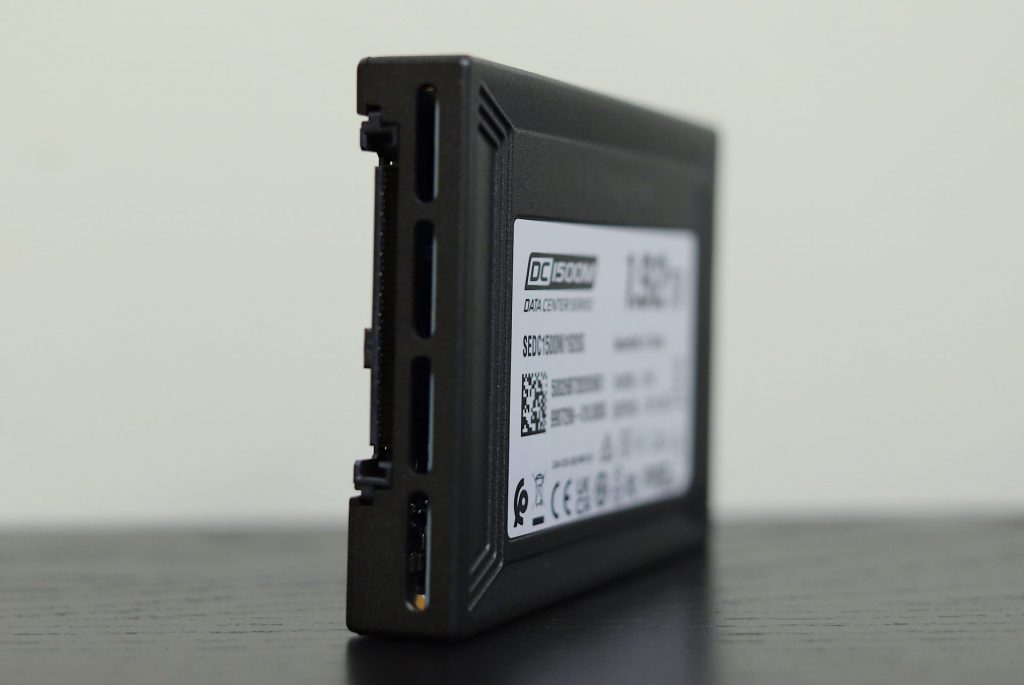 For performance, we mostly saw subtle improvements over the DC1000M. We looked at both our Application Workload Analysis and VDBench tests and compared the new Kingston SSD to other drives that are meant for similar environments. In our Applications Workload Analysis benchmarks, the DC1500M showed weaker numbers in Sysbench performance, posting 12,579 TPS and an average latency and worst-case scenario of 24.3ms and 49.03ms, respectively. For Sysbench the drive posted average TPS and latency with 5,218.4 and 24.53ms, respectively, worst-case scenario hit 49.03ms. These numbers put it at the bottom of the competitive pack. For Houdini, we saw 2,810 seconds, which placed the drive in the middle of the leaderboard, a pleasant surprise.

While the DC1500M isn’t a significant leap over the previous model, it’s still a solid release by Kingston with progressive updates like support for 64 namespaces. The U.2 drive offers good performance and capacity range, making it an affordable choice for a variety of use cases, particularly for organizations looking to upgrade from SATA or SAS drives.