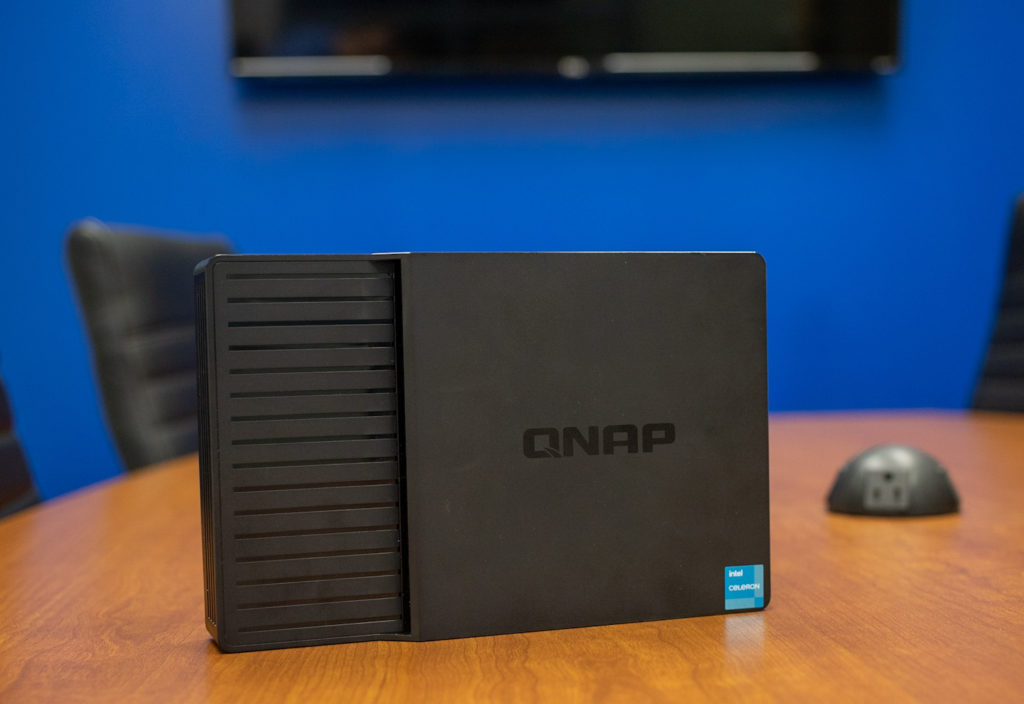 QNAP is one of the biggest producers when it comes to packaged NAS devices. Recently they diversified some, QNAP has made the KoiBox-100W, a business solution for video conferencing that is designed to replace costly SIP-based conferencing systems as it has to ability for 4K, four-way communication, bring together different platforms like Zoom and Skype, and much more.

The QNAP KoiBox is powered by the Intel Celeron dual-core 1.8GHz CPU and has 4GB of DDR4 memory installed on the system. The KoiBox also has 30GB of M.2 2242 storage. These components don’t make up the strongest and fastest device on the market, however, for what the KoiBox is, the components are good enough to run everything that users are going to want to get out of it.

All the connectivity on the KoiBox can be found on the rear of the device as the front only has the power button. On the back, there is the power adapter port and an HDMI 1.4b port that supports a 4K display. Next to that are four USB 3.2 Gen 2 Type-A ports that users are able to use for any type of accessories that might be needed for where the KoiBox is deployed at. After the USB ports, there is a Gigabit Ethernet port for an Internet connection, and lastly, a Kensington security lock for added protection. 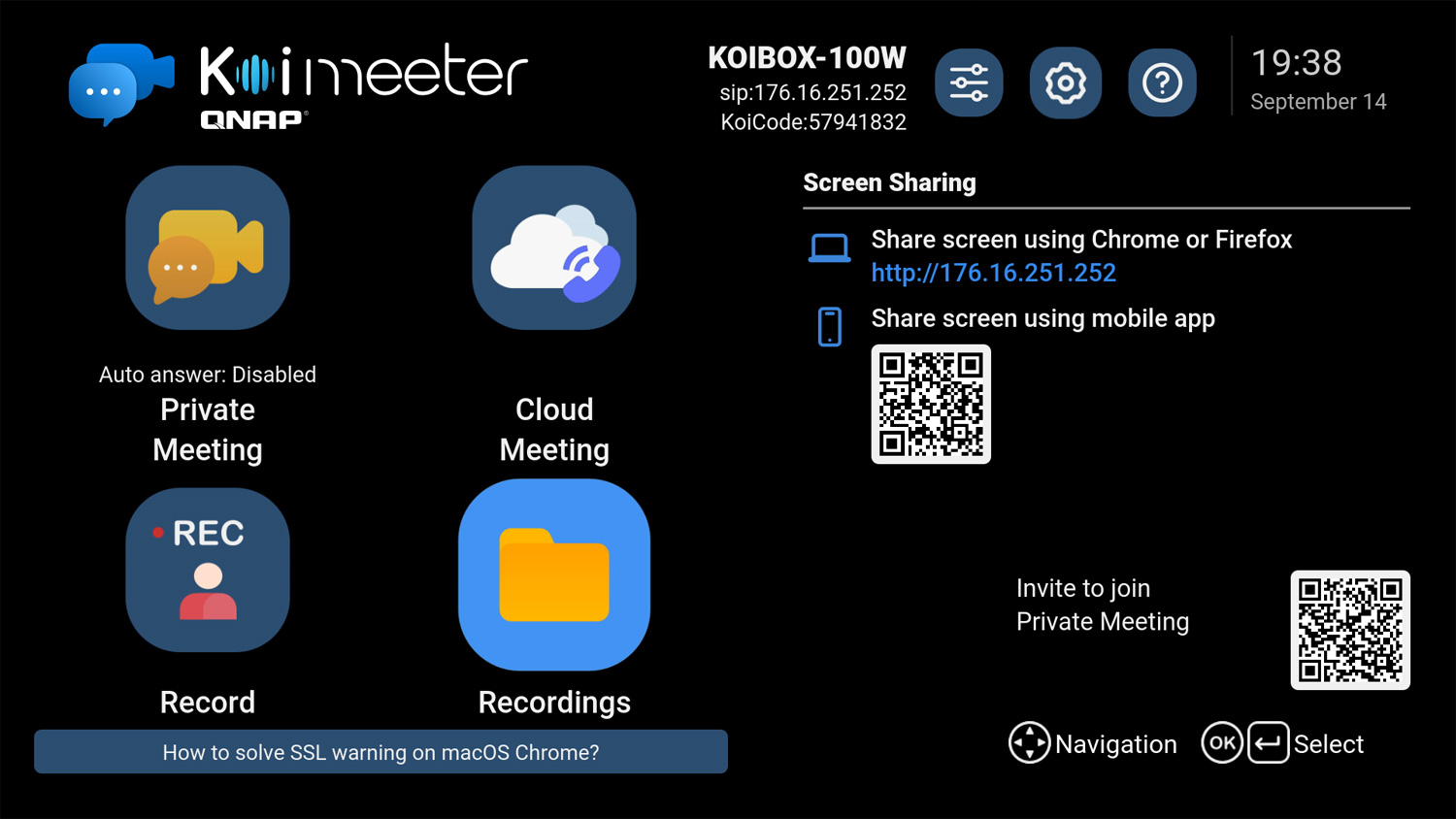 The operating system that is running on the KoiBox is KoiMeeter, a proprietary software created by QNAP that allows users to use video conference systems seamlessly. KoiMeeter allows business admins to build a high-quality and budget-friendly ecosystem, making multi-site communication smoother and streamlining teamwork.

KoiMeeter also comes with several features to help users such as wireless presentation, wireless projection from multiple sources, directly saving meeting recordings, connecting via the mobile app, and more. Support for 3rd party conference platforms such as Zoom or Teams is through Linux-based apps, running on the underlying OS. For each conference session brought up, the app is loaded in the background by itself and then closed to go back to the home screen.

The internal drive is used to record video calls. Koibox to Koibox calls support native recording, although there is a bit of a bypass for 3rd party conference apps. Since many don’t support recording for basic users, QNAP gets around this by performing a total screen record. Users can initiate this by clicking the record button on the remote.

The KoiBox comes in at 9in x 6in x 1.7in and weighs 2.4lbs. A decent-sized device for its capabilities of it as it can also hold a single 2.5-inch SATA HDD or SSD. The size and weight also allow it to blend well in any type of business environment as it comes in black so it doesn’t stand out and doesn’t have any special features that make it noticeable when in use. The KoiBox also has an entirely plastic shell with a strong base so it can be weighed down but is also lightweight to be moved around. 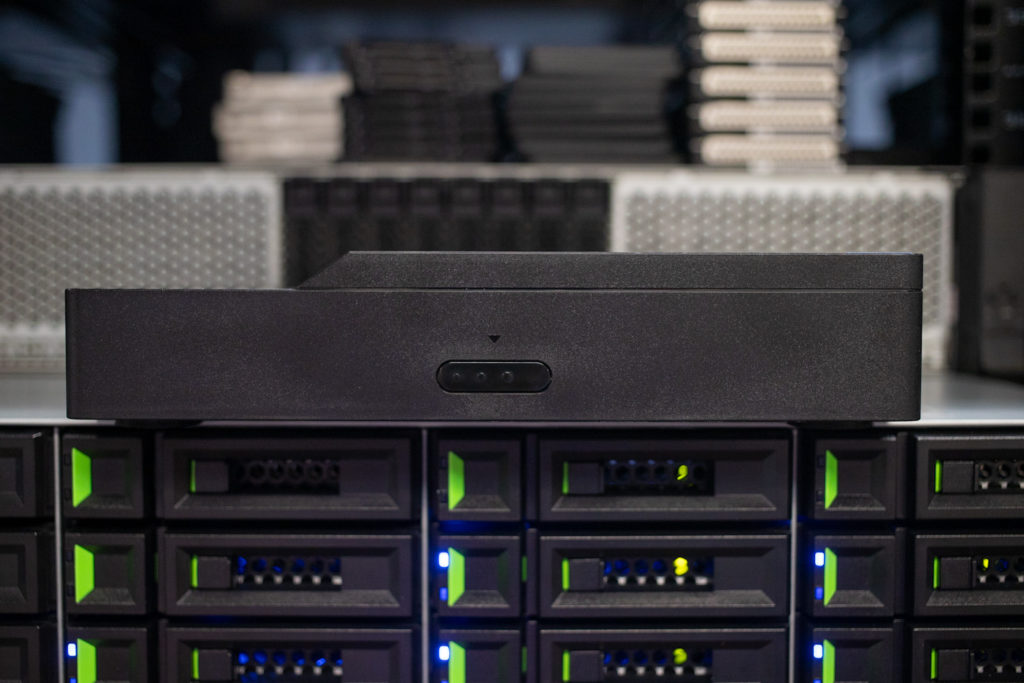 The front of the KoiBox features a sleek black design with a power button in the middle that has built-in LEDs to signify each power status that the KoiBox has. When the light is blue, the KoiBox is “on”, when it is a breathing blue light, it means “stand by”, and lastly, when the light is red, it means the system is “off”. The top of the KoiBox also has the QNAP logo that is set off to the side and higher than the rest which actually provides functionality as there are vents that help provide airflow when the system starts to heat up. 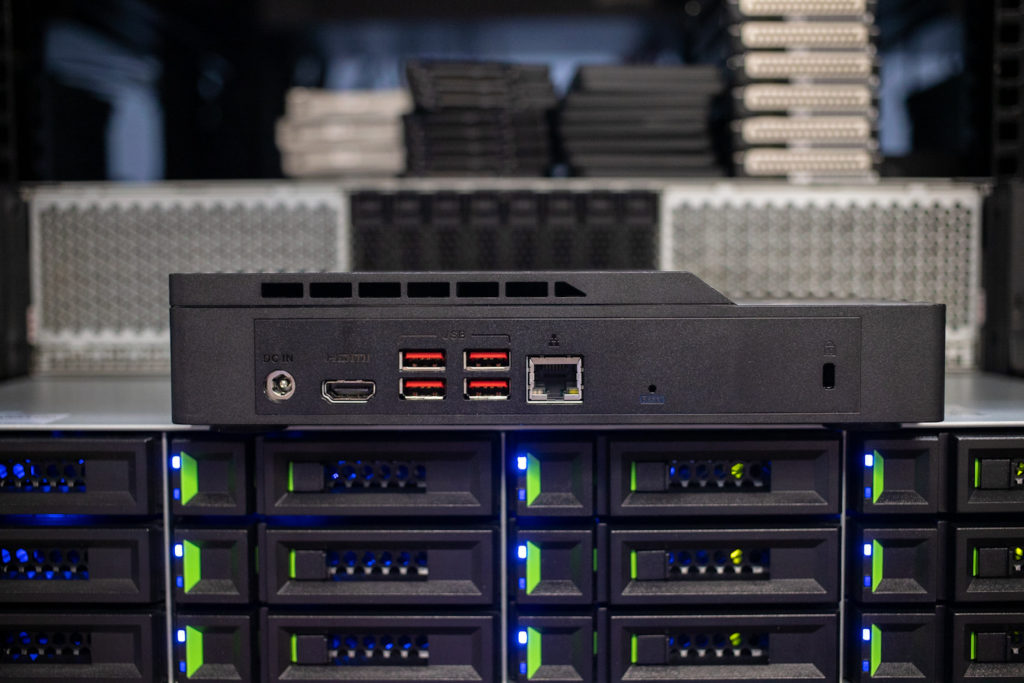 The rear of the KoiBox features all the connectivity that users and office spaces might need when it comes to deploying this within an environment. Starting from the left side, there is the power adapter for the power cord, and then a video output to an HDMI display. Next are four USB 3.2 Gen 2 Type-A ports that users can use for accessories such as a speaker, camera, keyboard, or mouse. After the USB ports is an RJ-45 Gigabit Ethernet port, and lastly, a Kensington Security Slot. 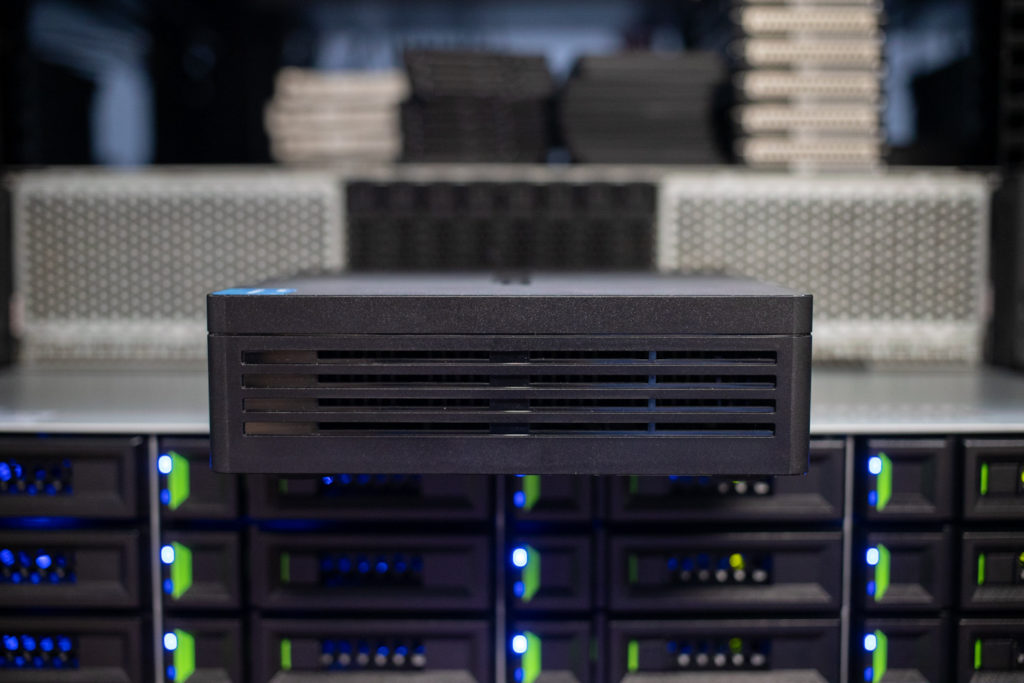 The KoiBox also features a remote for users that wish to use the device at a distance as using a keyboard and mouse might not be the most ideal for example, for those that have it connected to a mobile TV cart. The remote resembles that of a standard smart device remote that you might find with a Firestick or Roku.

The setup of the KoiBox was quite easy to do as it was only a few steps to get to the point where the system is ready to go do conference calls. Some of the beginning steps include setting the language, detecting an audio and video device, and how to use the remote. On an important note, there is only one mandatory accessory that QNAP says, which is a camera, but also a keyboard and mouse are necessary for joining cloud meetings.

Optional devices include a conference speaker and microphone system. During our use, we leveraged a Dell UltraSharp 4K Webcam. The Koibox had no trouble discovering it immediately. During our testing the only issue that cropped up was during certain idle activities back at the home screen, the webcam would repeatedly switch from day to night mode.

Similar to the compatibility list of drives that QNAP has on its website, QNAP also has a list of recommended accessory devices that would work best with the KoiBox. In terms of the camera, QNAP has stated that Logitech cameras are going to be the best, webcams like the Logitech PTZ Pro 1, C922, C930e, BRIO, and more. For conference speakers, the Jabra Speak 410, 510, and 710 would be the best options, and for camera + microphone options, the Logitech MeetUp, Logitech GROUP, and ConferenceCam are some of the best options. 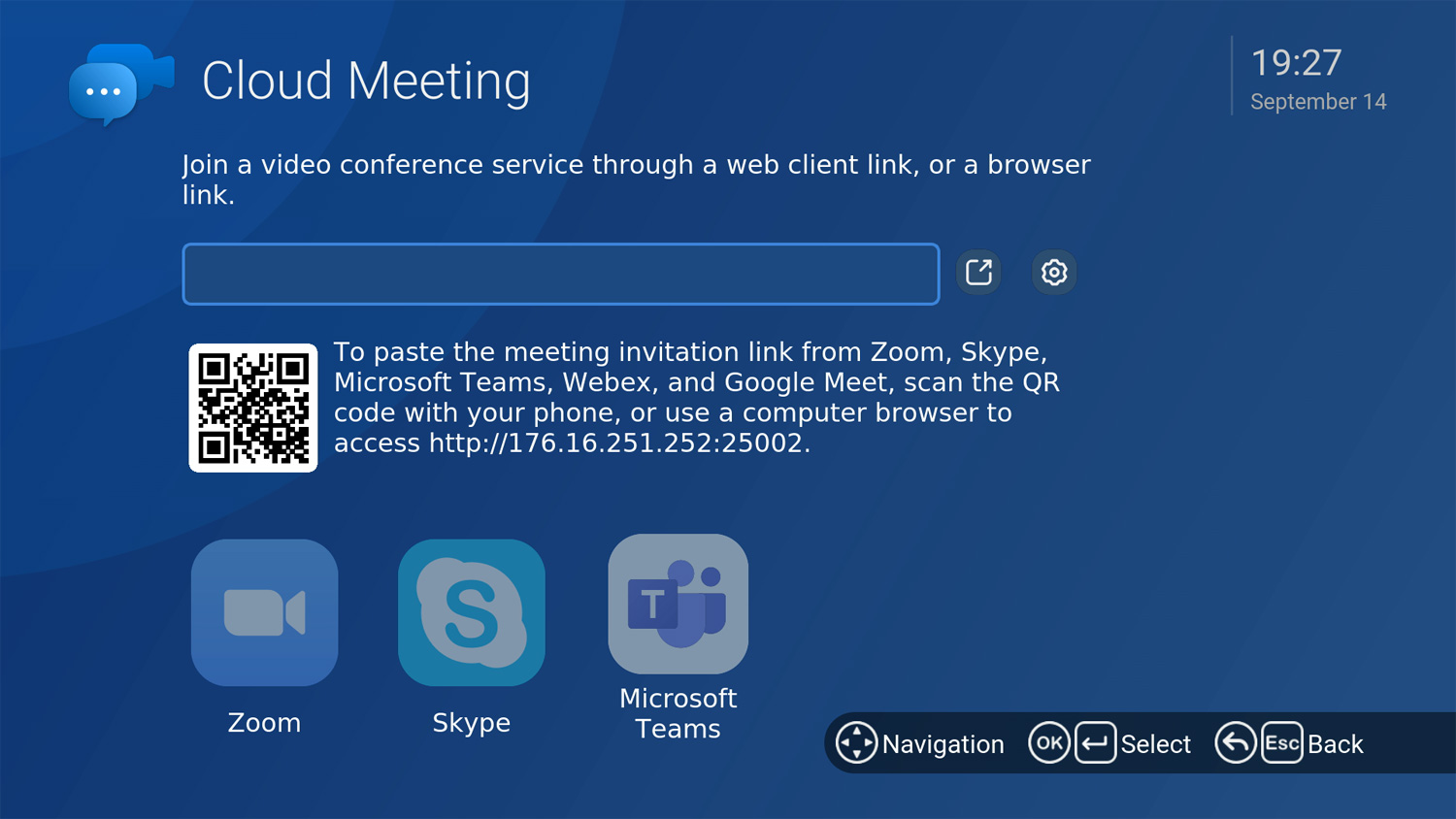 Leveraging the QNAP Koibox for conference calls in our environment worked as expected. When the time for a call would come up, we could copy the meeting link from one of our computers to a webpage hosted on the QNAP Koibox to remotely load conference sessions. This helps prevent the need to manually type in a really long web link. With that in place, the Koibox loaded the right native app for that session and started. For the intended use case it worked well as a standalone platform.

Overall, the QNAP Koibox-100W is an interesting option for businesses that are looking for a way to video conference with support for any type of program. The KoiBox is ideal for those that need a dedicated conference platform in a shared meeting space. It also fits smaller budgets for businesses that are more open to rolling their own solutions and assembling hardware as needed. Some of the competing options can be alarmingly expensive. That said, in the era of remote work, organizations may prefer their teams use phones and laptops. Ultimately it just comes down to what your business needs to participate in online calls.

The Koibox interface offers a simple, user-friendly way to communicate via professional video conferences. On top of it being quite easy to use and not the most expensive option on the market, it offers some inventive ways to perform functions like recording for 3rd party conference platforms. Interestingly this feature was added during our review process, so it’s worth noting that QNAP is continuing to add features over time.

The KoiBox is currently $449 on Amazon.