The QNAP TBS-464 is a tiny NAS that can go with you anywhere. It accepts four M.2 SSDs, runs silently, and has the same management features as QNAP’s full-sized units. Networking is somewhat limited, with just two 2.5GbE, but the TBS-464 is still a great portable storage and productivity hub.

The QNAP TBS-464 is a tiny NAS that can go with you anywhere. It accepts four M.2 SSDs, runs silently, and has the same management features as QNAP’s full-sized units. Networking is somewhat limited, with just two 2.5GbE, but the TBS-464 is still a great portable storage and productivity hub.

The TBS-464 stands alone in the NAS world as a truly portable device, with no direct competition. It’s more likely to be contrasted with desktop external storage drives or a multi-drive enclosure, such as the OWC Express 4M2, than mini-NAS towers, which are far from portable. It sells for $599 without drives on Amazon.

The TBS-464 accepts four M.2 2280 PCIe Gen3 drives. The largest drive in that form factor is 8TB, for a maximum of 32TB. Drives that size mean QLC storage, though the performance limitation in the TBS-464 is its dual 2.5GbE networking ports, not drive performance. It would have been nice to have 10GbE as an option, though that would have increased heat output and, of course, upped the price. 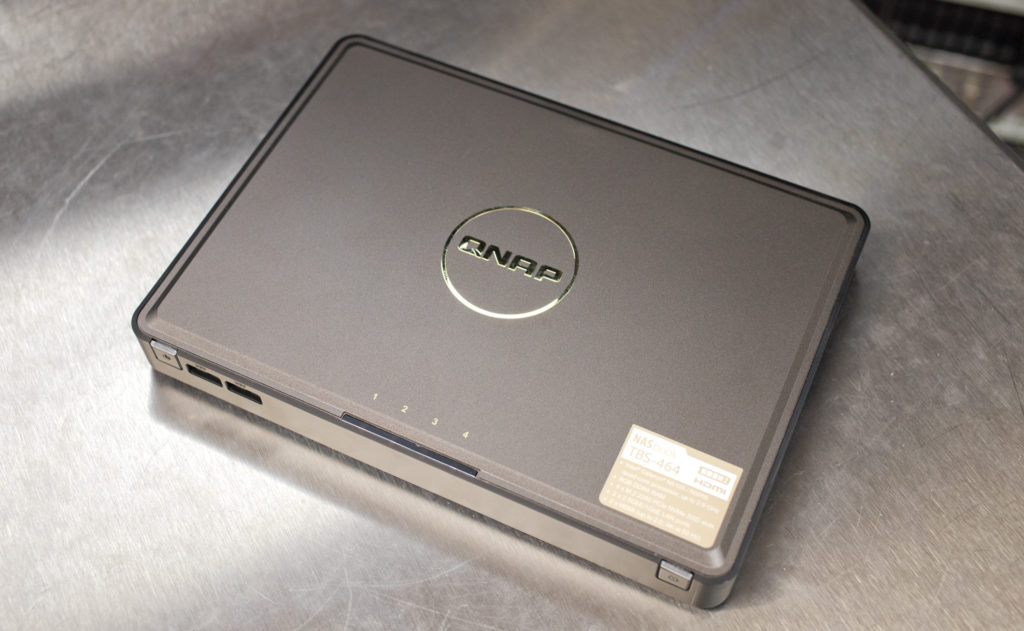 For management, the TBS-464 runs the QTS 5.0 operating system; see our review of the similar QTS 4.3. It’s reasonably responsive on the NAS’s Celeron N5105 quad-core CPU and 8GB of RAM. The latter isn’t expandable. 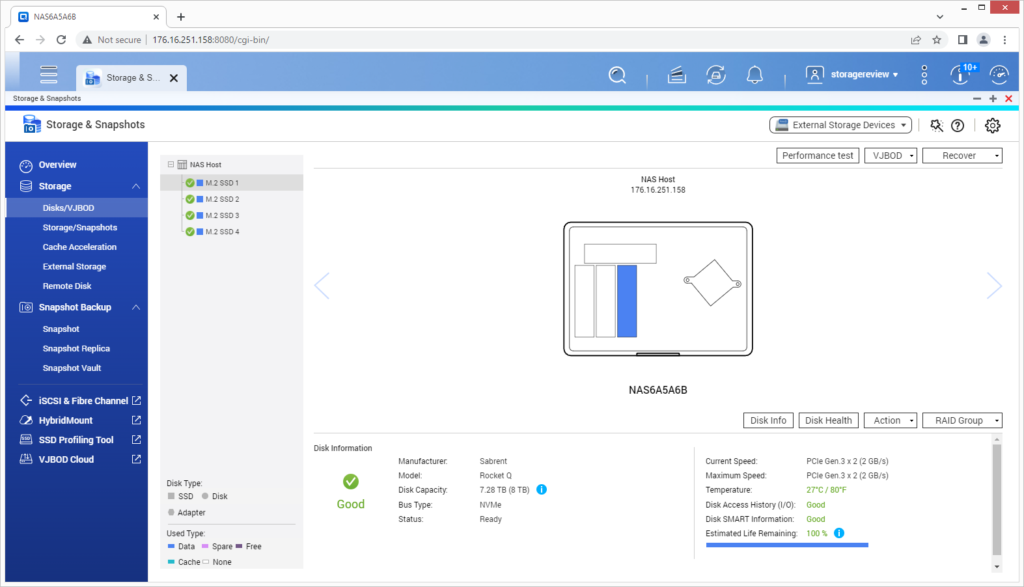 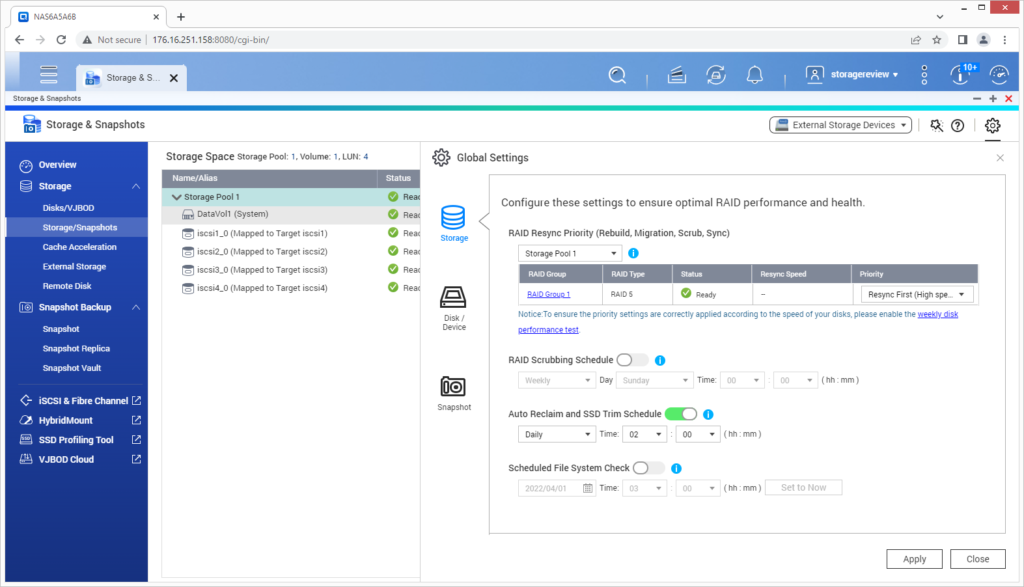 The TBS-464’s full specifications are as follows:

The TBS-464 is compact enough for daily travel at 1.18 x 9.06 x 6.5 inches (HWD). Its starting weight is 1.8 pounds, plus about another pound for its external power adapter. The latter is inevitable given this device’s size.

Front port selection includes two USB-A 3.2 Gen 1 ports for data transfer. The power button is also here, and there are four drive indicator lights along the top edge. There’s also an IR receiver for use with the optional remote control.

Getting inside the TBS-464 is a straightforward affair, with knurled flathead screws holding the bottom cover. There’s not much to do inside besides install the M.2 drives. We installed the four-drive maximum in our unit. Notice the included heatsinks and thermal pads at top right. 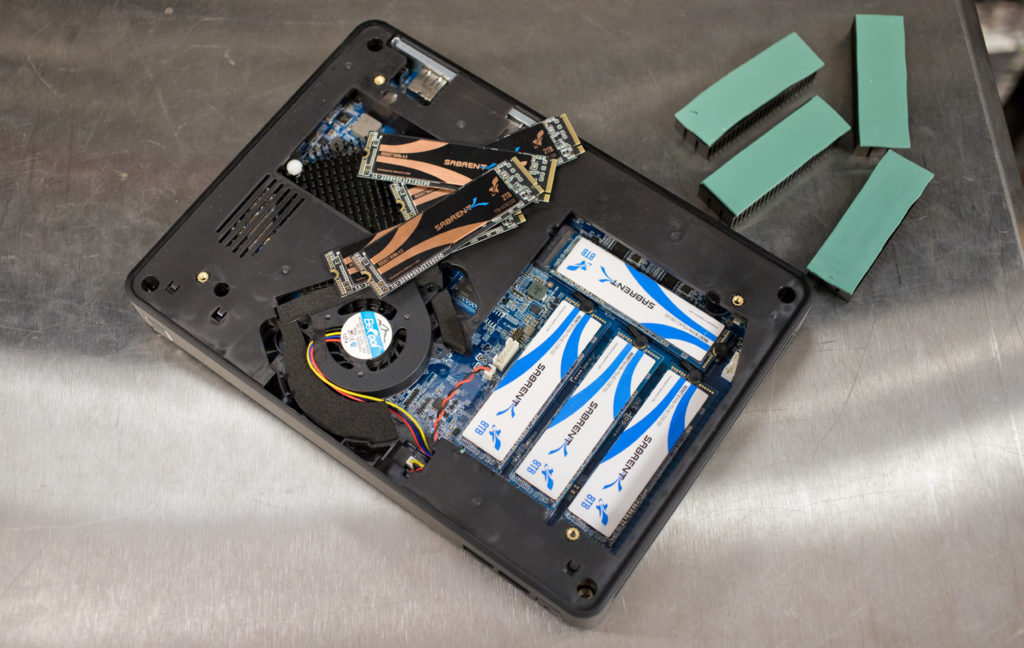 The small cooling fan next to the drives is important for keeping thermals under control. It made next to no noise in our testing. Speaking of which, let’s get the TBS-464 on the bench.

Also, if you want to see videos of the unboxing or drive loading, we have videos on social media:

We tested the TBS-464 with the following drives:

Though these are PCIe Gen4 drives, they will be limited to Gen3 speeds in the TBS-464. The Rocket 4 Plus has the potential to perform much better than the QLC-based Rocket Q4, but in this NAS, performance is (as noted) chiefly limited by the two 2.5GbE ports. Because of that, QLC drives are a practical and economical choice for this NAS. We are testing using both 2.5GbE ports via port trunking.

We start with a long sample of random 4K performance with 100% and 100% read activity. The performance differences between the drives we used is almost negligible, so we are already running into the performance limitations of the twin 2.5GbE ports. Highlighting this, in iSCSI read we saw 88,672 IOPS from the Rocket 4 Plus drives and 89,711 read IOPS from the Rocket Q4 drives, a difference of around one percent. The other testing pairs fared similarly.

Next is 4K average latency. The latencies are nice and low to begin with, though as with the previous test, differences between the drive models are minimal. If anything, the higher-capacity Rocket Q4 drives demonstrated lower latency.

Our last 4K test is standard deviation, where we continue seeing competitive numbers from the drive pairs.

Up next are our mixed workload 70% read/30% write tests, which scale from two threads, two queues to 16 threads, 16 queues. Our first test is throughput. The SMB numbers improved relative to 4K throughput, though iSCSI IOPS remain limited. In iSCSi write, the TBS-464 peaked at 49,578 IOPS with the Rocket 4 Plus drives and 52,370 IOPS with the Rocket Q4s. 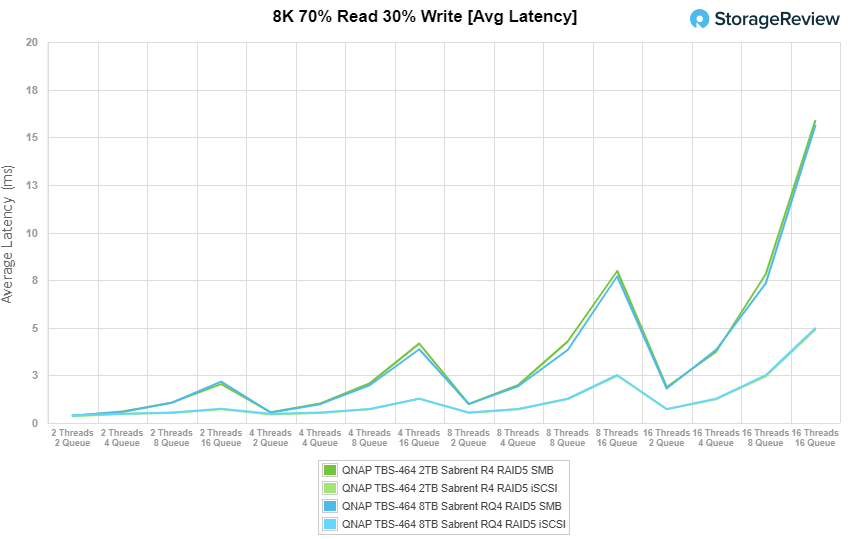 Now we’ll look at 8K 70/30 max latency. The lines are hard to follow, but we see more consistency from the Rocket Q4 drives. 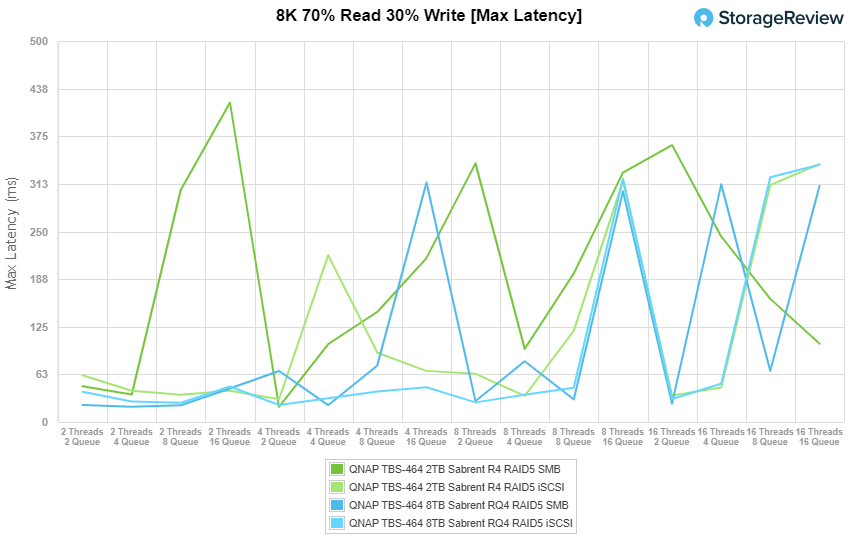 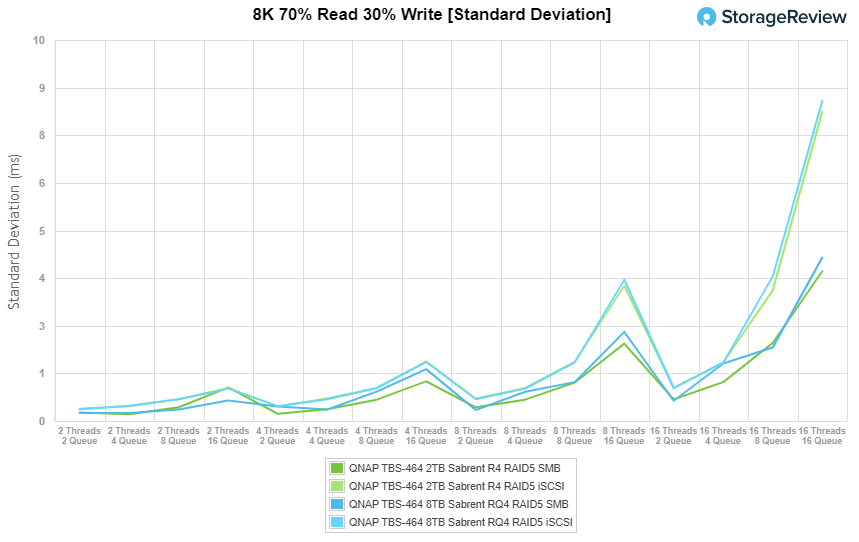 The last synthetic benchmark is our large block 128K sequential test which shows the highest sequential transfer speed for a device. QNAP claims the TBS-464 can do 586MB/s read and 574MB/s write, and our numbers are right about there. As we’ve seen in the other tests, overall performance is limited by the 2.5GbE ports.

QNAP carves a niche with the TBS-464. This portable NAS has no direct competition, packing four M.2 2280 PCIe drives into a space smaller than a laptop. It runs almost without noise.

Our performance testing validated QNAP’s claimed throughput. Using Sabrent Rocket drives, we saw 578MB/s read and 572MB/s write in both SMB and iSCSI in our 128K sequential test. Those are the best numbers you can hope for, as the TBS-464 is bottlenecked by its two 2.5GbE ports. Having 10GbE ports would have given it much more headroom, though with increased heat and cost. We would at least like the option.

Though the TBS-464 isn’t inexpensive, especially after adding drives, it can easily pay for itself as a portable storage device, offering far superior management and productivity features than could a standalone storage drive enclosure. Provided you don’t need massive throughput and can benefit from the shrunken size and noise profile, this little NAS gets our recommendation.