Sabrent has quietly updated its Rocket 4 Plus SSD with new firmware for its Phison PS5018-E18 controller and Micron B47R 3D NAND TLC memory. These upgrades significantly improve its performance, and though it isn’t as fast as the Kingston KC3000, it’s priced accordingly and ultimately a solid multi-purpose PCIe Gen4x4 drive.

Sabrent has quietly updated its Rocket 4 Plus SSD with new firmware for its Phison PS5018-E18 controller and Micron B47R 3D NAND TLC memory. These upgrades significantly improve its performance, and though it isn’t as fast as the Kingston KC3000, it’s priced accordingly and ultimately a solid multi-purpose PCIe Gen4x4 drive.

This updated Rocket 4 Plus is based on the Phison PS5018-E18 controller like the original Rocket 4 Plus we reviewed, but now it has updated firmware and newer Micron B47R 3D NAND TLC memory. 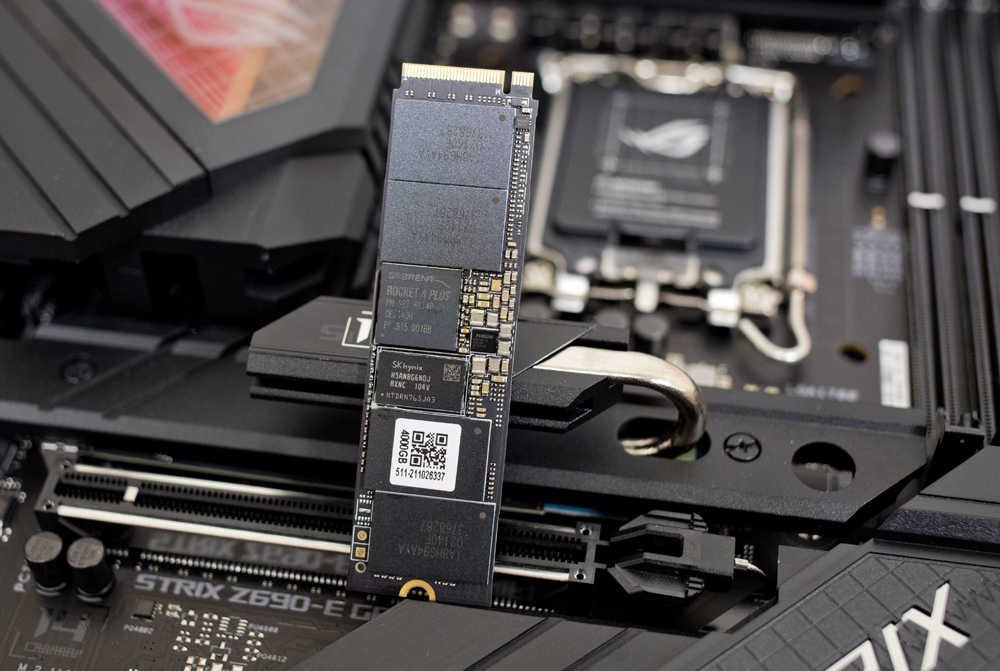 Sabrent isn’t labeling the drive any differently despite the upgrades. Even in person, you’d have to look at the memory chips to verify they’re the newer NAND. That said, according to Sabrent, all current stock of the older R4P SSD’s are now replaced by the new R4P B47 SSD’s. If a user wants to check they can bring up our Rocket Control Panel and check the Firmware version The older drives are RKT4P1.2, the new ones are R4PB47.2.

Sabrent is a bit conservative with the Rocket 4 Plus’s performance ratings, though in fairness it hasn’t updated the ratings since the drive was released. It rates the 4TB drive we’re reviewing at a healthy 7GB/s sequential read and 6.9GB/s write, though only 650,000 4K random read IOPS and 700,000 4K random write IOPS. Kingston rates its PS5018-E18-based KC3000 for up to 1 million IOPS in both read and write. 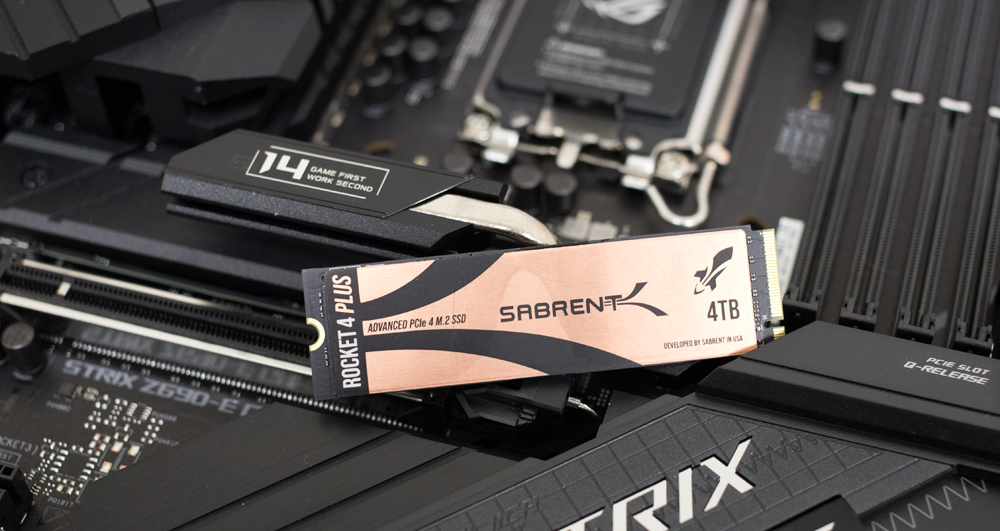 Should you be upgrading your PlayStation 5’s storage, Sabrent sells the Rocket 4 Plus with a PlayStation 5-compatible heatsink. The heatsink is a wise investment since the PlayStation 5 has no active cooling to its M.2 slot, so drives without heatsinks can get too hot and overheat under sustained use. Sabrent sells the heatsink separately (Amazon has it for $20). Our Samsung 980 Pro Heatsink review shows how a heatsink can result in improved performance.

The updated Rocket 4 Plus’s full specifications are as follows:

We are reviewing the 4TB version of this drive and comparing it to the following PCIe Gen4x4 drives:

Starting with SQL average latency, the Rocket 4 Plus’s 3ms average latency is competitive and near the top of the chart, on par with the other Phison E18 drives. 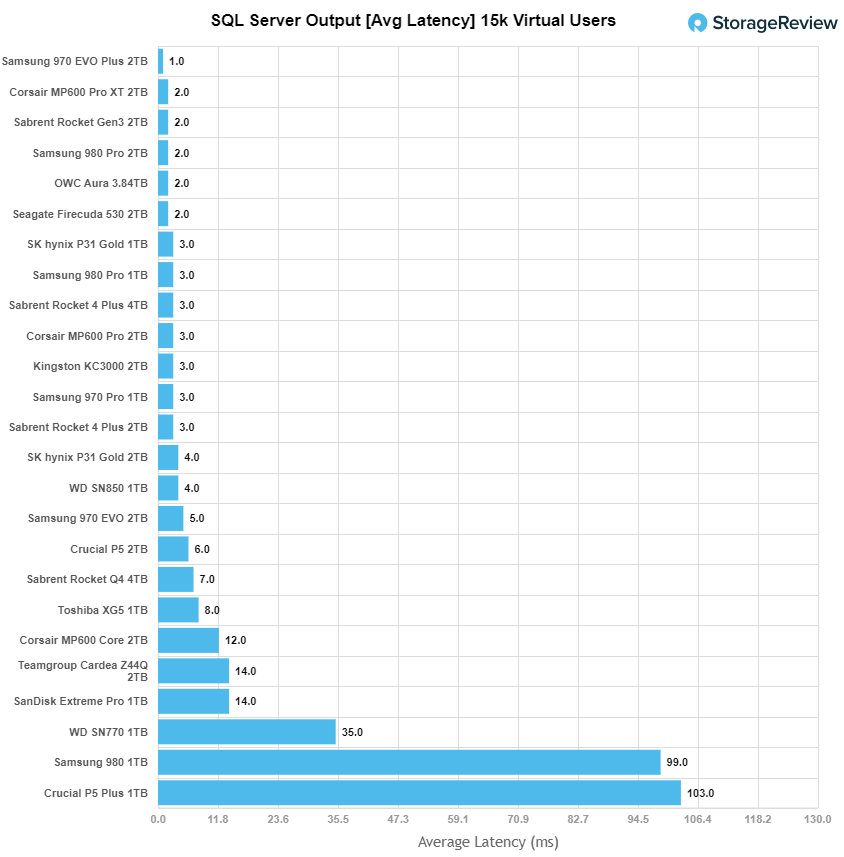 Starting with 4k random read, the updated 4TB Rocket 4 Plus showed massive performance gains over the original 2TB version, topping out at 549K IOPS with a latency of 231µs compared to the original’s 296K IOPS and 431µs. The Seagate FireCuda 530 did slightly better, though there was no touching the Western Digital SN850.

Random write 4k is next, where again the updated Rocket 4 Plus impressed versus the original version; it ended with 455K IOPS and 275µs latency where the original drive reached just 227K IOPS with a far higher 558µs latency. That said, both the Phison E18-based Corsair MP600 Pro XT and the Seagate FireCuda 530 did better.

Sequential write 64K is the updated Rocket 4 Plus’s most impressive showing yet; it topped 1.85GB/s at just 103µs latency. The FireCuda 530 and the Force MP600 Pro XT achieved higher throughput at the cost of higher latency. The original Rocket 4 Plus was left in the dust.

Now we’ll move onto our VDI full clone tests. In our boot profile, the updated Rocket 4 Plus came in at 122K IOPS at 280µs, just behind the KC3000’s 130K IOPS and 264µs. As has been the case in all tests thus far, it outperformed the original Rocket 4 Plus, which achieved 111K IOPS at 290µs. The Western Digital SN850 also continued to outshine its rivals.

The VDI initial login chart looks almost indecipherable because the drives posted unstable results, though the updated Rocket 4 Plus avoided major spikes; it ended the test at 28.8K IOPS and 1,040µs. It was much stabler than the original Rocket 4 Plus.

VDI Monday login also showed testing instability among most of these drives, with lots of spikes. The updated Rocket 4 Plus maintained relatively low latencies even though it didn’t post chart-topping IOPS; its last showing was 26.5K IOPS and 601µs.

Sabrent’s updated Rocket 4 Plus is far more capable in its second iteration thanks to new controller firmware and Micron B47R memory. Our testing showed universally improved performance versus the original drive.

Testing highlights include 549K IOPS in 4K random read, 455K IOPS in 4K random write, 5.41GB/s in 64k sequential read, and 1.85GB/s in 64k sequential write. Other pros include its availability with a custom PlayStation 5-specific heatsink (which can be purchased separately for $20 and used with non-Sabrent drives) and its availability in capacities up to 4TB. 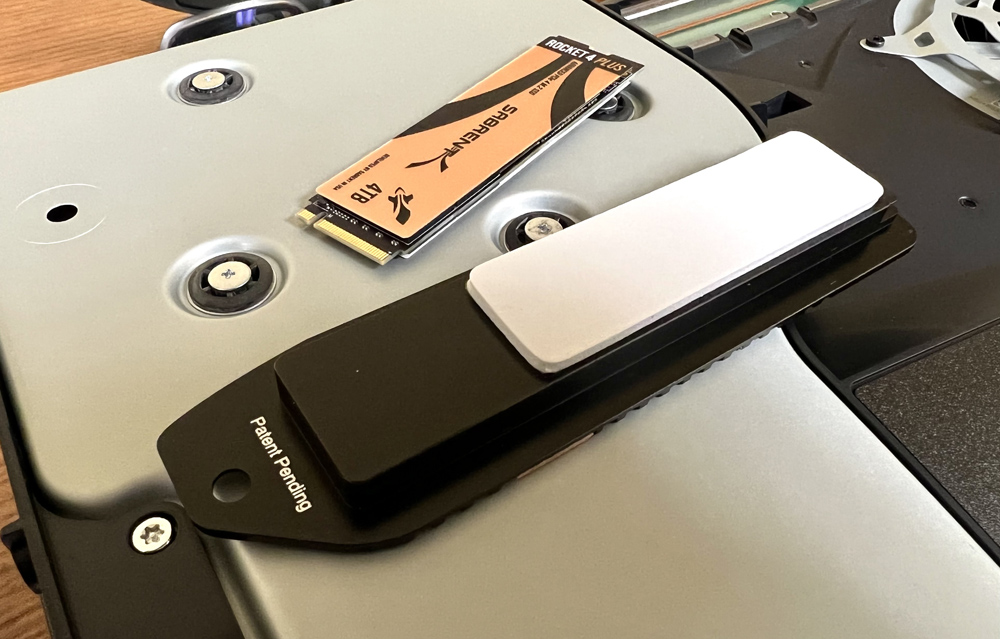 Its toughest competition may be the Western Digital SN850, which is an outstanding performer and priced significantly under the Sabrent at the 2TB capacity. The WD SN850 and Samsung 980 Pro don’t come in a 4TB model, which gives the Sabrent Rocket 4 Plus an edge for buyers needing more capacity in the M.2 form-factor.

Overall, the Rocket 4 Plus is a reasonable all-around Gen4 consumer SSD but it doesn’t stand out in any particular way among Phison E18 drives. The direction Sabrent has gone through is to offer integrated solutions paired with their SSDs in platforms such as the Sony Playstation 5, which gives them reach beyond just the PC gaming arena.

Sabrent Rocket 4 Plus at Amazon