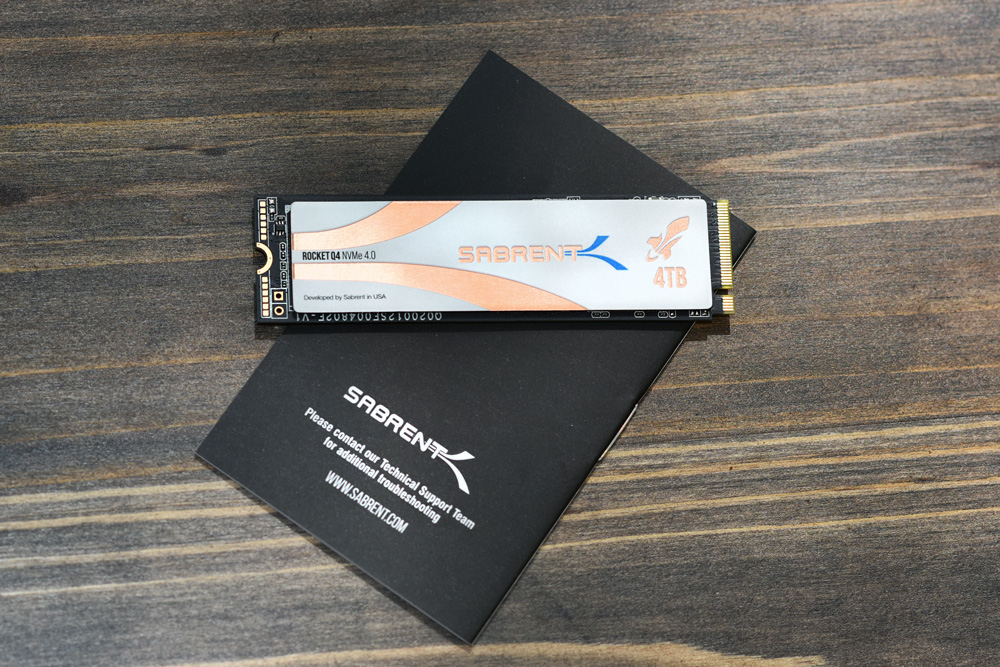 The Q4 supports SMART and TRIM commands as well as some reliability features such as Advanced Wear Leveling, Bad Block Management, Error Correction Code, and Over-Provision. The Sabrent drive also comes with downloadable software, including the company’s Sector Size Converter (SSC), which allows users to change the drive’s sector size, and Acronis True Image. Sabrent’s Control Panel is the usual proprietary SSD management software, which allows users to do things like check drive health, use secure erase, and upgrade firmware.

The Sabrent Rocket Q4 features a very nice silver and copper-colored sticker, which displays the company logo, product name, and drive capacity. It’s one of the nicer ones we’ve seen if that matters.

On the back is the usual sticker with detailed information about the drive, including serial numbers and certifications. 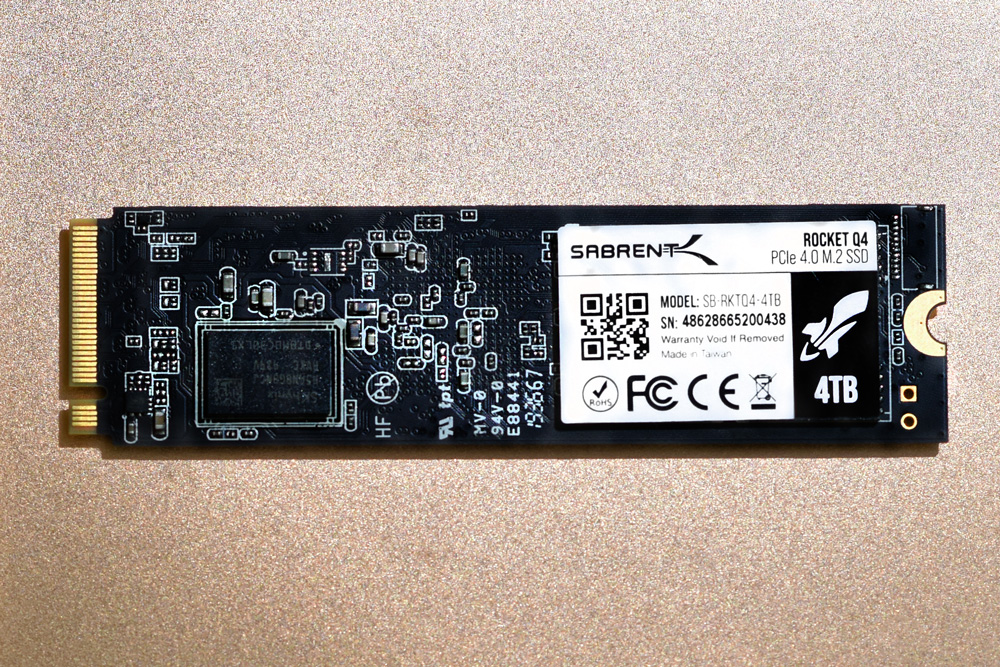 The Q4 also features a sizable, optional heat sink pad to keep it cool during heavy workloads, which helps to avoid performance throttling due to high thermal levels. Though it’s certainly not really necessary, it makes the drive look cool. 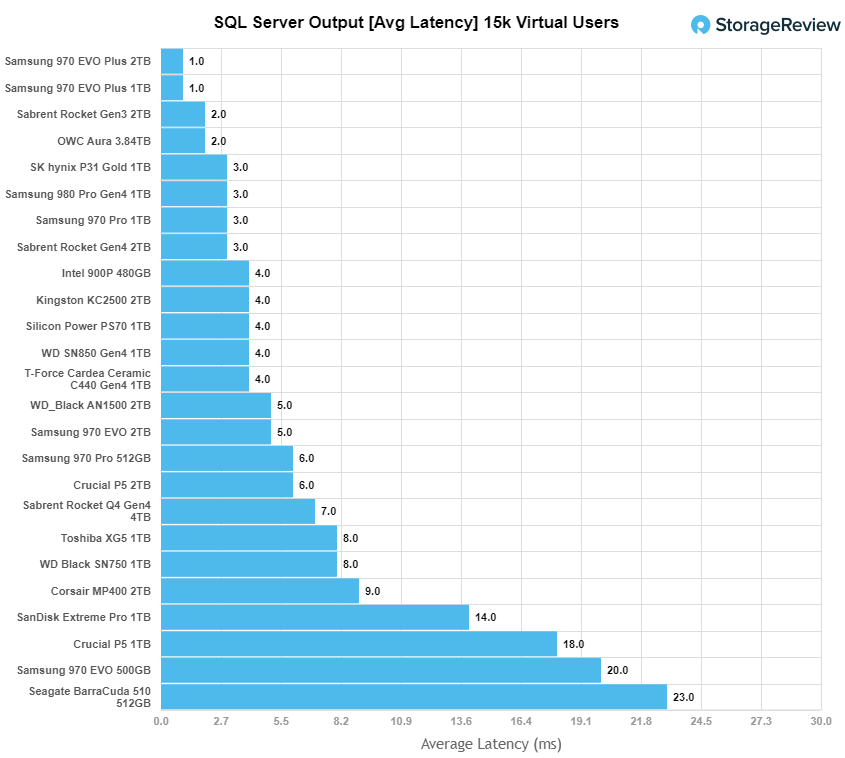 In 4K random read, the Sabrent Q4 showed a peak of 363,347 IOPS with a latency of 178.4µs. Though it had similar IOPS and superior latency performance compared to the other drives during its peak, it took a sharp dip at the end, placing it behind the two PCIe 3.0 drives.

Switching over to sequential workloads, we first look at 64K read. Here, the Q4 had a peak of 56,917 IOPS or 3.56GB/s at a latency of 561.1µs before taking a slight dip at the end. This was good enough to take the top spot by a noticeable margin.

Next, we looked at our VDI benchmarks, which are designed to tax the drives even further. These tests include Boot, Initial Login, and Monday Login. Looking at the Boot test, the Sabrent Q4 showed similar performance as the Corsair drive (though showing a bit of instability at the end) with a peak of 88,472 IOPS at a latency of 368.4µs.

Though the Q4 showed the best peak performance by a significant margin (92,587 IOPS at 319.9µs) in VDI Initial Login, it became more unstable as the test went on.

Our VDI Monday Login told a similar story, as the Sabrent had the best peak performance by mile with 47,495 IOPS at a latency of 333.7µs, before it showed a huge spike in performance immediately after.

The Sabrent Rocket Q4 is an NVMe SSD that leverages the new PCIe 4.0 interface and QLC NAND Flash memory, all packed inside the small M.2 2280 form factor. Available in capacities up to 4TB, the Q4 is the last model from the Rocket line that we looked at. 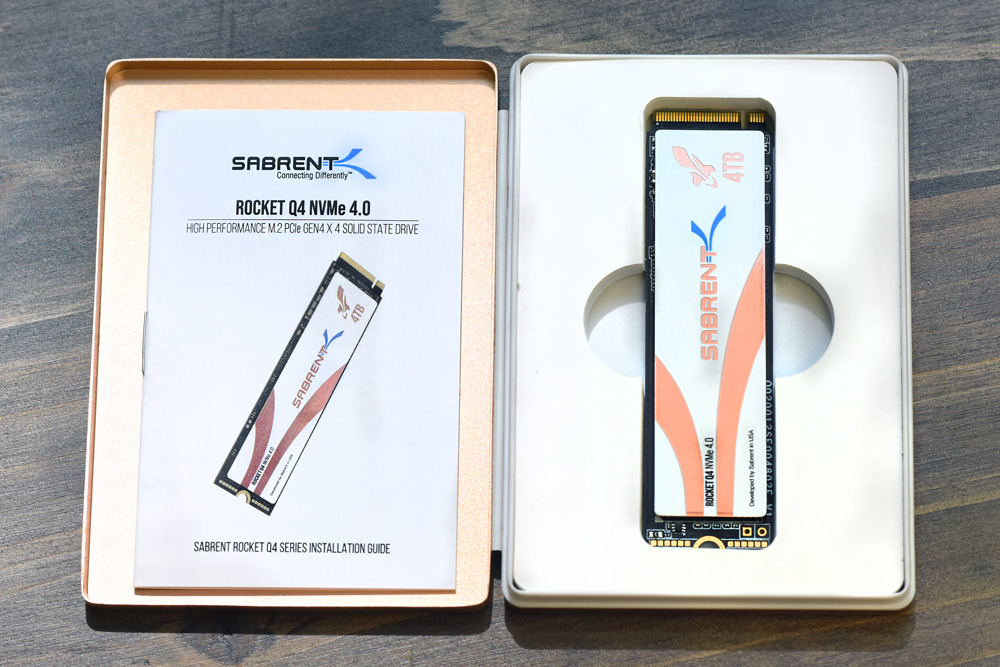 For our VDI benchmarks, the drive hit a peak of 88,472 IOPS in boot, 92,587 IOPS in Initial Login, and 47,495 IOPS in Monday Login; though it had good peak scores in all VDI results, numbers showed some fairly big performance spikes.

Though we are seeing more and more Gen4 drives hit the market, performance still isn’t nearly where we want them to be, as the interface has the potential to double the performance of the previous generation. This is the case with the Sabrent Rocket Q4, which posted numbers more in line with high-end Gen3 consumer-grade drives (though results did keep within its quoted numbers from Sabrent, who indicated moderate sequential speeds). That said, we expect to see performance levels increase as we see more Gen4 drives in our lab, and as compatibility improves.

Overall, the Sabrent Q4 had good performance numbers, though its price point of $440 for the 2TB model will be pretty steep for most consumers. This is especially so when you compare it to the Corsair MP400, which is priced at around $290 with similar performance.