The all-new Sabrent DS-SKRT Docking Station is an all-in-one solution for users looking to increase workflow and productivity. The DS-SKRT offers a variety of connectivity for external devices along with up to 16TB of NVMe storage via twin NVMe M.2 bays. The dock can support up to 40Gbps of bandwidth over both Thunderbolt 3 ports as well as supports up to 8k30 with the DisplayPort 1.4 port.

The all-new Sabrent DS-SKRT Docking Station is an all-in-one solution for users looking to increase workflow and productivity. The DS-SKRT offers a variety of connectivity for external devices along with up to 16TB of NVMe storage via twin NVMe M.2 bays. The dock can support up to 40Gbps of bandwidth over both Thunderbolt 3 ports as well as supports up to 8k30 with the DisplayPort 1.4 port.

The Sabrent DS-SKRT is a jack of all trades device allowing those that use it anything that they might want or need. With a wide range of connectivity support, there are many deployment opportunities for the DS-SKRT, whether it be for people who work from home or those wanting to increase their workflow flexibility. This docking station works great for people who don’t have a lot of ports or storage on their devices. 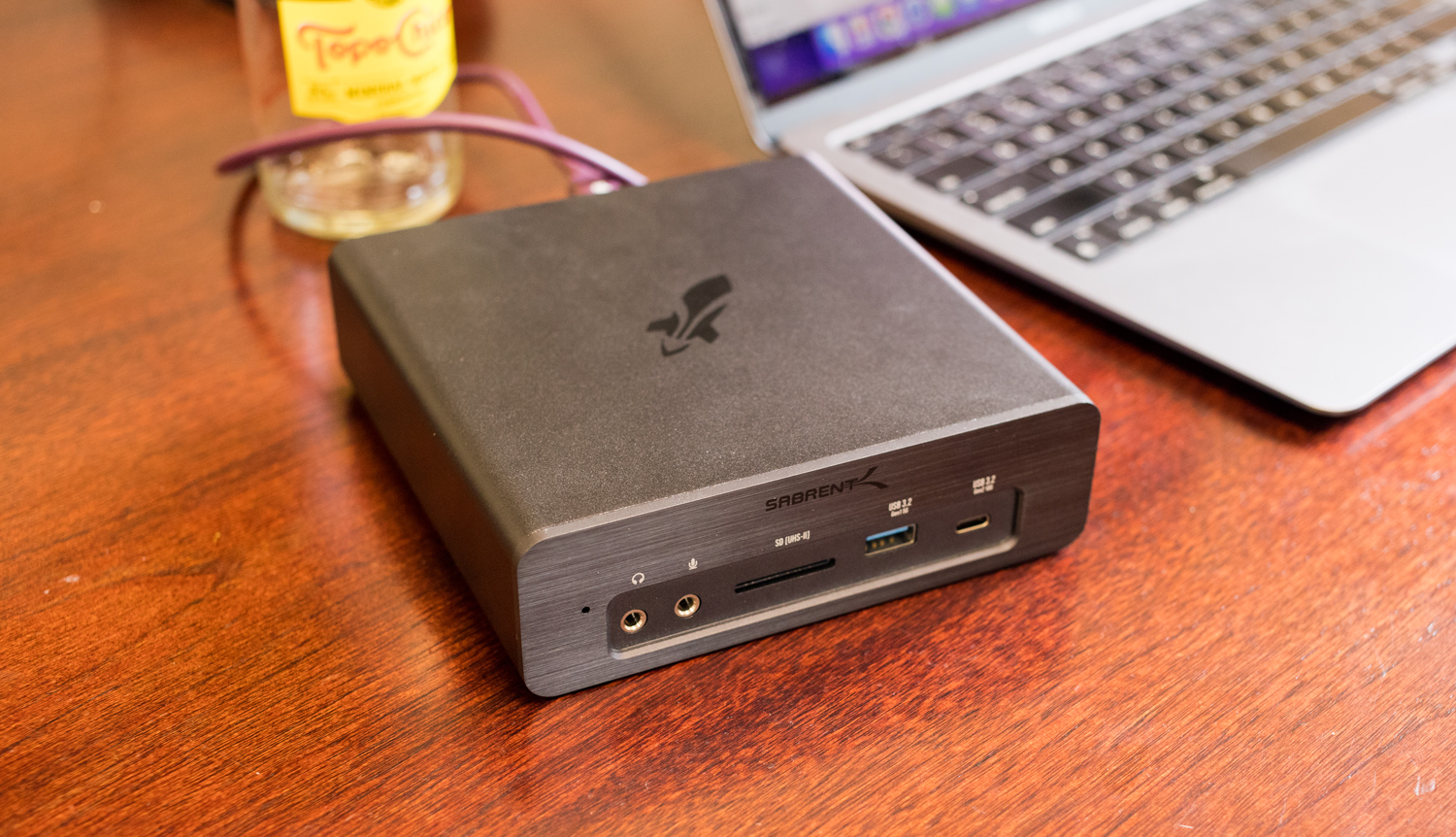 The DS-SKRT is especially great for Apple notebook users who really are limited by the Thunderbolt-only ports. With the DS-SKRT, you can power your MacBook along with establishing more screens for it. Since small laptops are usually limited by storage, the DS-SKRT provides up to 16TB of space.

The Sabrent DS-SKRT-D8TB is quite a compact device measuring 5.55 in x 5.57 in x 1.7 in. Even though the DS-SKRT is quite small, it does have decent heft to it, weighing 2.11 pounds. With this size and weight, the DS-SKRT is easy to deploy and station virtually anywhere, giving anyone is the ease of mind that the DS-SKRT won’t move nor get in the way of any other devices.

The outer shell of the DS-SKRT is made of aluminum, similar to most other hubs and other stationary devices. The aluminum acts as a heatsink for the device as it does tend to get warm with constant use. Sabrent has also made the enclosure screw shut, which is better than the completely sealed designs some manufacturers offer. Sabrent did go with Torx screws though to move the internal chassis. This is somewhat annoying, considering the more common Phillips would have worked. A minor gripe, but the ease of serviceability is a big bonus in devices like these.

On the front of the DS-SKRT is where users will find the headphone/microphone jack, an SD memory card slot, one USB 3.2 Gen1 port (Type-A), and a USB 3.2 Gen2 port (Type-C). Sabrent decided that these ports are the most necessary to put on the front for users, and while they will see the most use, possibly having another USB port, Type-A or Type-C might be more helpful since most people will have multiple devices and plugging into the rear is a nuisance sometimes.

On the rear of the device is where the ports for other device connectivity can be found. There is one Thunderbolt 3 PD port (up to 96W), one regular Thunderbolt 3 port, a DisplayPort, two USB 3.2 ports, one Gen2 and the other Gen1, a gigabit ethernet port, and the AC power adapter. These ports add a ton of functionality to the DS-SKRT allowing for a multiple display setup, with power over the Thunderbolt 3 port and even network connectivity over the RJ-45 port. 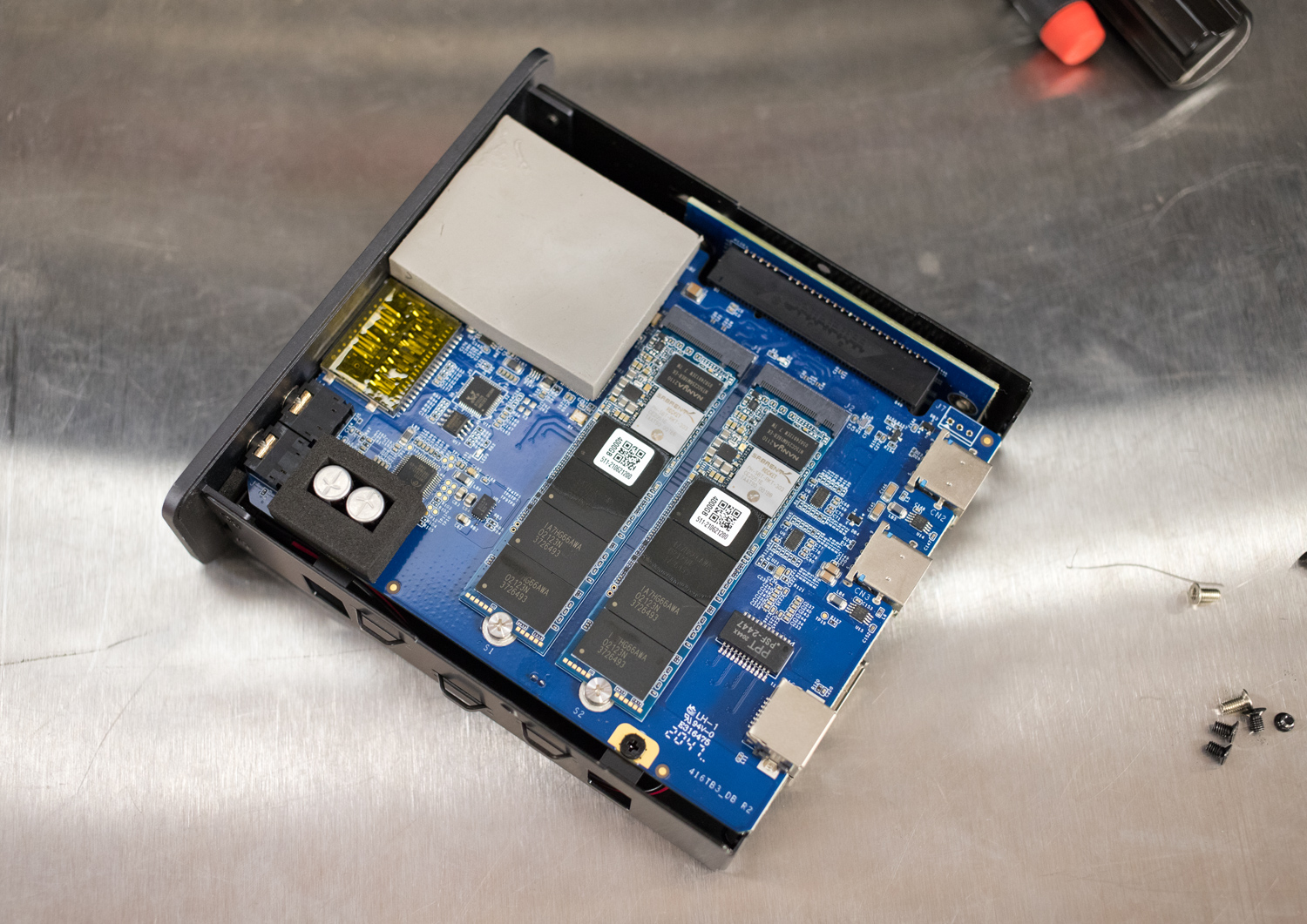 On the inside is where users will find what makes this connectivity hub different than most out there. With two M.2 NMVe’s, offering up to 16TB of storage, the DS-SKRT is built for professionals in any type of environment. Removed and out of frame is a heatsink that covers both SSDs, giving this enclosure a really nice thermally managed design.

The two tests that we ran to test the performance of the Sabrent DS-SKRT were the IOMeter at 1-thread and then 4-threads. The system that we used to test was the Lenovo ThinkPad P17 Gen 2 with the Core i9.

We utilized the drives that were already configured with the DS-SKRT, which are the Sabrent Rocket XTRM-A RKT30Q.3. We tested both drives individually and combined the results in the tables below. Alternatively, you could use Software RAID on the Mac or PC to have additional deployment options.

From the results of this first test, we saw a very good performance from the drives in each profile until we got to the 4K random write, however, there is always a drop in performance once this profile tests, but then the 4K random read makes up for it immediately.

Overall the performance was strong. In fact, we roughly doubled the spec sheet numbers.

Unfortunately, the DS-SKRT doesn’t officially support Linux, however, with Windows OS and Mac OS support, the reach this docking station has may be wide enough. The Sabrent DS-SKRT-D8TB is intended for professionals, and we expect that there probably won’t be much layperson use, especially with the premium price tag it has, however, we hope to see an empty unit that users can fill with their own M.2 NVMe’s.

For the performance tests that we ran on the DS-SKRT, we were actually able to get over the 1500 MB/s that was reported by Sabrent for the DS-SKRT. We were able to reach a speed of 2.96 GB/s, which is almost double what was reported, meaning that this device offers users a very fast and reliable way to transfer data between their device and the NVMe’s that come with the DS-SKRT. On an important note, we were able to get these speeds over Thunderbolt 3, which means that unless your device is configured with Thunderbolt 3, don’t expect those speeds.

Overall, the Sabrent DS-SKRT is a really nice hub with storage, especially for anyone that is looking to increase the workflow and I/O flexibility of their workstation. For users that are working on a notebook or MacBook, almost all systems these days are configured with at least one Thunderbolt 3 port, so users can expect to get the full performance out of this box.

The Sabrent DS-SKRT gets our recommendation with its high versatility and functionality for any port-constrained professional who can benefit from more storage capacity.