The Samsung 870 EVO is the latest entry into the company’s successful line of consumer SSDs. The EVO line has been a highly successful endeavor for the company, as the line finds the perfect balance between performance and price while offering Samsung’s pedigree in reliability. These mid-range consumer drives are designed for all kinds of use cases, from everyday use and gaming, to those looking for a decent upgrade in performance for PC and even just those looking for a reliable SATA SSD.

The Samsung 870 EVO is the latest entry into the company’s successful line of consumer SSDs. The EVO line has been a highly successful endeavor for the company, as the line finds the perfect balance between performance and price while offering Samsung’s pedigree in reliability. These mid-range consumer drives are designed for all kinds of use cases, from everyday use and gaming, to those looking for a decent upgrade in performance for PC and even just those looking for a reliable SATA SSD. 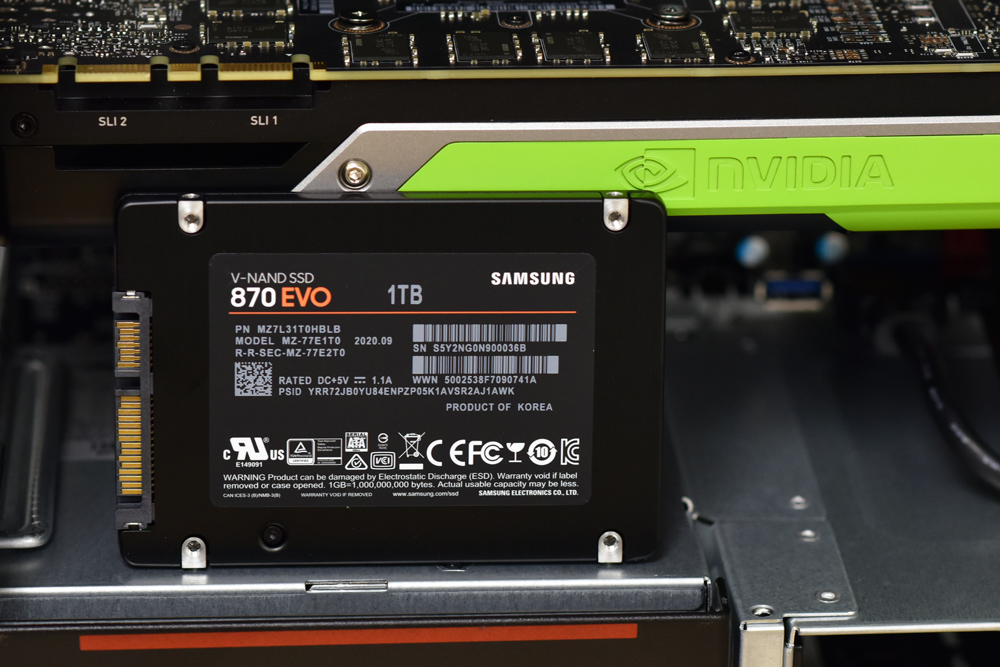 That said, it’s been a while since we’ve seen another EVO release (the last one being the 970 EVO Plus in the summer of 2019 and even longer since a 2.5-inch release), so we are certainly happy to get our hands on it. The 870 EVO uses TLC (or 3bit MLC, as dubbed by Samsung) 3D V-NAND, is available in capacities from 256GB up to 4TB, and features the company’s newest in-house controller. The 870 EVO also offers an endurance of up to 2,400TBW for the highest capacity model. 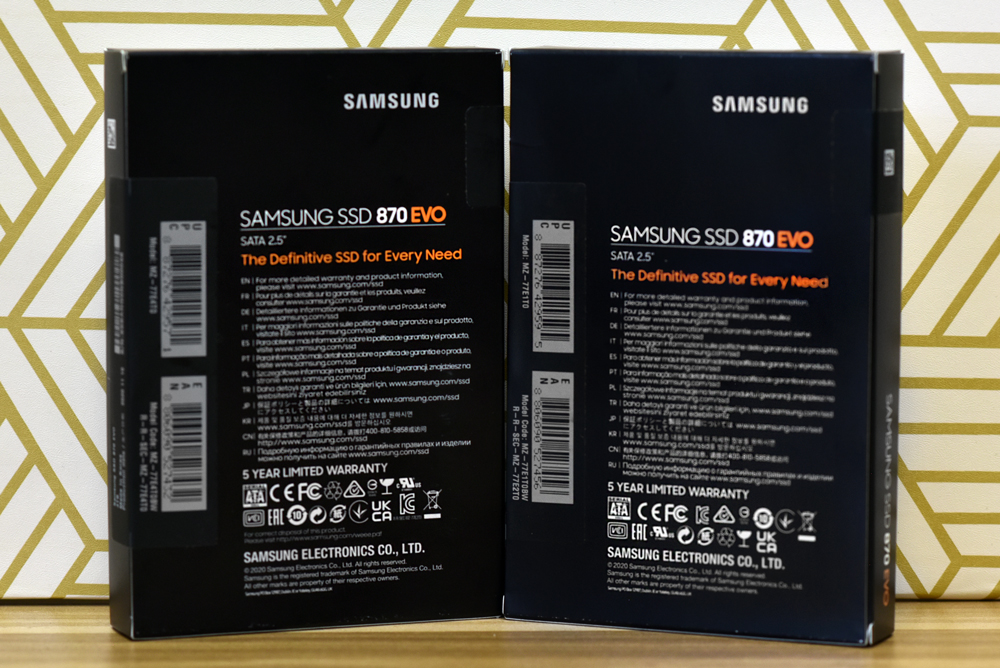 As expected, the Samsung EVO 870 didn’t mess with its design. It is identical to its previous iterations like the 860, featuring its timeless look-and-feel: a black enclosure with a light gray square on top of the drive under the Samsung branding. Most Samsung drives use this exact same enclosure, so it certainly saves the company money when mass-producing the drives. 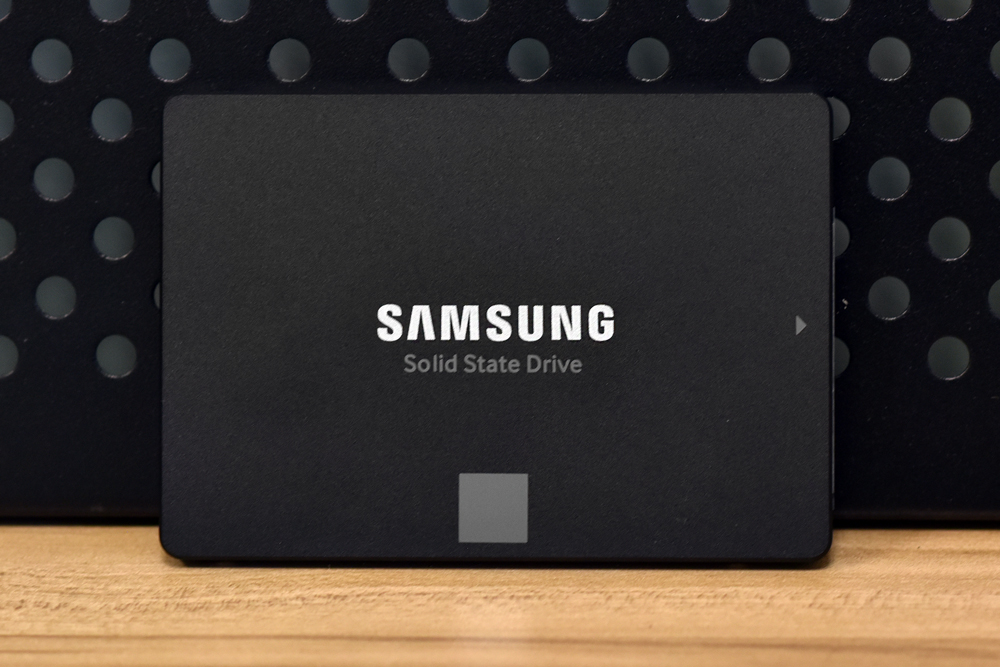 Turning the 870 EVO over to the backside reveals all the information you need located on the drive sticker, including the model and serial number, capacity, and certifications. 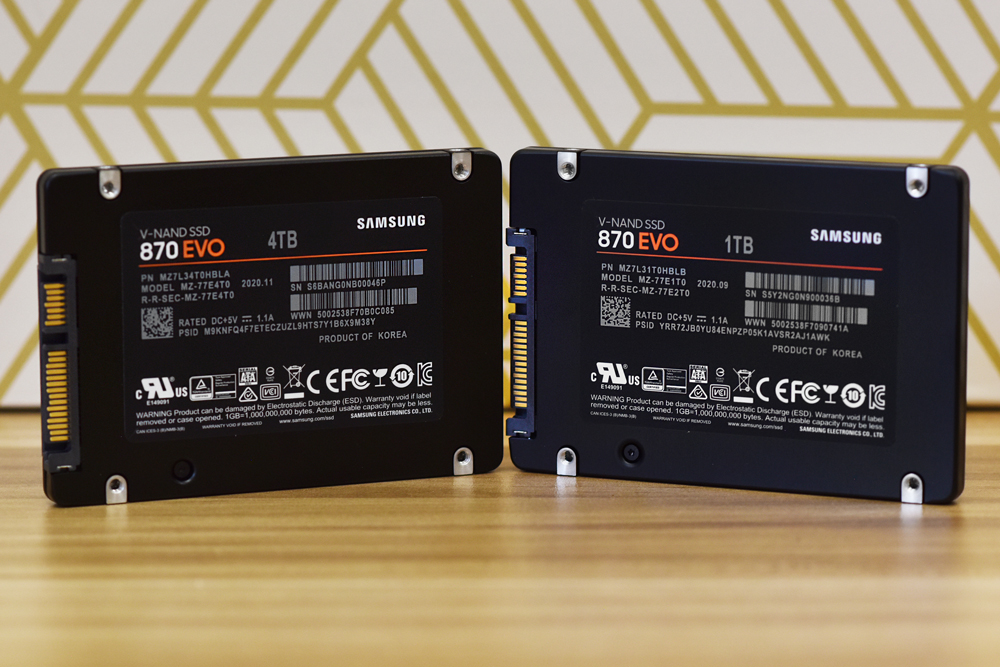 Under the hood, you can see the new Samsung MKX controller, Samsung NAND packs, and DRAM on the PCB. 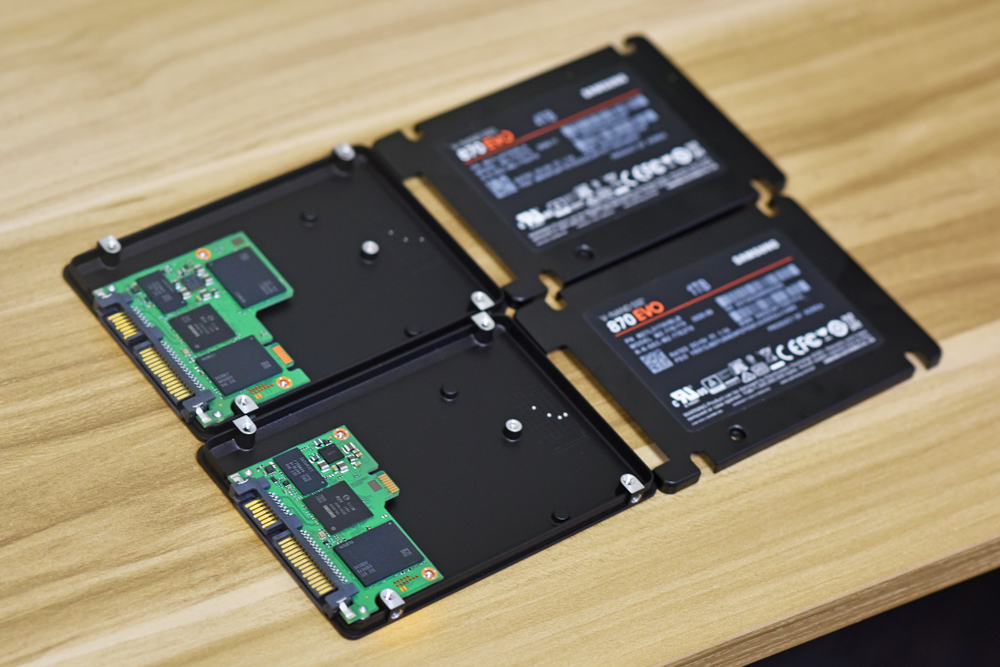 Looking inside the cases, it’s interesting to see how small the drives have become. While the 2.5″ SATA case is a bit overkill for these drive innards, the compact nature of these next-generation drives is more towards how they get leveraged in small external devices. Not a lot is needed to hit the capacity requirements.

Next, we looked at our VDI benchmarks, which are designed to tax the drives even further. These tests include Boot, Initial Login, and Monday Login. Looking at the Boot test, the 1TB Samsung 870 EVO peaked at 26,502 IOPS at a latency of 1,304ms while the 4TB model peaked at 27,582 IOPS at 1,234ms.

VDI Initial Login, the 1TB Samsung 870 EVO had a peak performance of 14,193 IOPS at a latency of 2,108ms while the 4TB model hit a peak of 17,021 IOPS at 1,755ms before taking a pretty big dip in performance at the very end (though easily taking first place among the tested drives).

It has been quite some time, but Samsung has finally released the next iteration of the company’s highly popular 2.5-inch SATA SSD line, the Samsung 870 EVO. This drive leverages Samsung’s 3D V-NAND, features the company’s newest MKX controller, and is available in the same capacity points as the last-gen model (250GB to 4TB). Samsung states that the new 870 EVO boasts sequential read and write speeds up to 560MB/s and 530MB/s, respectively, while random performance is expected to hit up to 98,000 IOPS read and 88,000 IOPS writes, though it didn’t quite reach those levels in our tests. 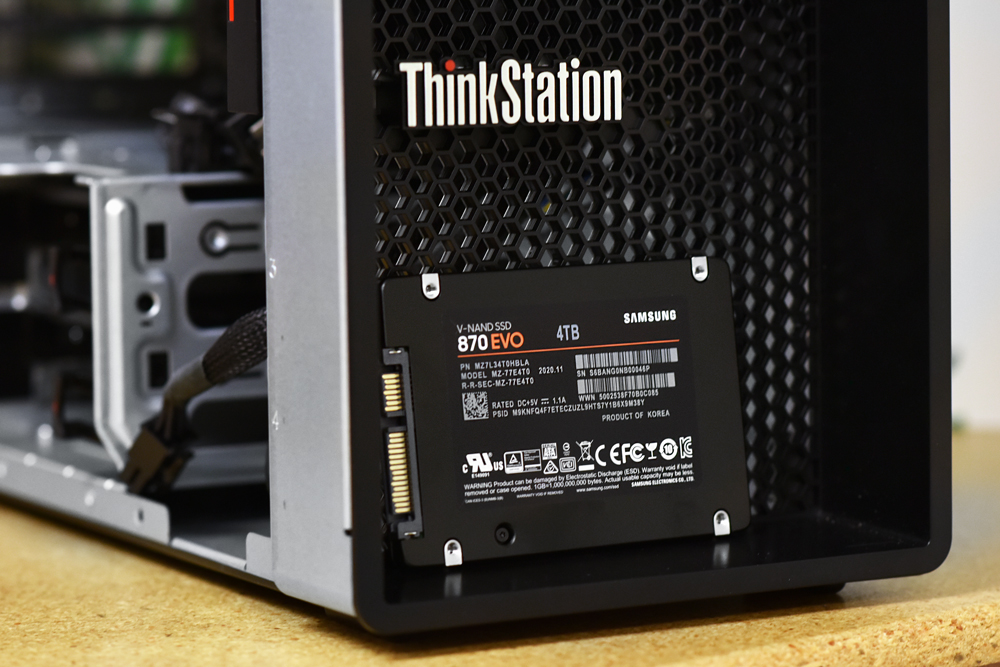 On paper, the 870 EVO seemed like a modest refresh of the last-gen model; however, results from our benchmarks told a slightly different story. For performance, we looked at both the 1TB and 4TB models and compared them to three other consumer-grade 2.5-inch SATA SSDs: the OWC Mercury Extreme Pro, Seagate FireCuda 120, and its predecessor, the 860 EVO.

For 4K random read and write, we saw both Samsung capacities hit around 75K IOPS and 63K IOPS, respectively, while the other tested drives showed very similar performance. Moving on to 64K read, the Samsung 870 EVO capacities saw 480MB/s for the 1TB and 487MB/s for the 4TB (much better than the 860’s 290MB/s) while 64K write we saw 369MB/s and 418MB/s, respectively. Though the 860 had better performance than the 1TB 870 EVO in sequential writes, the 4TB model showed a noticeable step up in speed.

The problem though is SATA SSDs are aging technology, new systems are all pretty much NVMe at this point. Further, QLC NVMe SSDs make the cost metrics closer than most people think. And from a performance standpoint, the SATA story gets very sad when compared to NVMe, which has an order of magnitude performance lead over SATA. Even the worst NVMe SSDs will blow the best SATA drives out of the water. All that said, there’s still a market for SATA SSDs. Samsung’s newest EVO release benefits a good deal from the vertical integration that Samsung has offered for years now, paired with a five-year warranty. Overall, we’d encourage most buyers to go NVMe, but the Samsung 870 EVO is a good release by the company, and a worthy successor to the 860.