NVIDIA just launched a new set of GPUs designed to take gamers to the next visual level. The GeForce family has added the RTX 3070 Ti and the RTX 3080 Ti. While we tend to focus on the ProVis GPUs like the RTX A6000 we just reviewed, gaming GPUs have a special place in the hearts of creative pros. That’s because gaming GPUs provide a blend of fun and productivity that you can’t really get from professional cards. We’ve previously looked at the RTX 3090 in this mixed-use role and now do the same with the RTX 3080 Ti.

NVIDIA just launched a new set of GPUs designed to take gamers to the next visual level. The GeForce family has added the RTX 3070 Ti and the RTX 3080 Ti. While we tend to focus on the ProVis GPUs like the RTX A6000 we just reviewed, gaming GPUs have a special place in the hearts of creative pros. That’s because gaming GPUs provide a blend of fun and productivity that you can’t really get from professional cards. We’ve previously looked at the RTX 3090 in this mixed-use role and now do the same with the RTX 3080 Ti.

This is yet a new addition to the RTX 30 series, so what is the difference between the NVIDIA GeForce RTX 3080 Ti compared to the 3090 or the 3080 without the Ti? First, let’s look at the two 3080s. From a specs perspective the Ti has about 1,500 more CUDA cores but slower boost and base clock rates. The Ti comes with 2GB more memory and 64-bit faster memory interface. The Ti takes 30W more to power it. For the base editions, they look near identical (our is different but we’ll get into that in the next section).

As mentioned, we don’t have the run-of-mill NVIDIA GeForce RTX 3080 Ti Founder’s Edition, we have the ASUS ROG Strix version. This isn’t just a gaming-specific version with some cool graphics on the outside either. ASUS is looking at the new brand of GPUs and trying to figure out a way to get them to users with high clock speeds, low temperatures, and low noise levels with no sacrifice in performance. With the RTX 3080 Ti, ASUS is bringing to market their first hybrid liquid-cooled Ampere card. We have the air-cooled version of the RTX 3080 Ti, but we will discuss some of the changes. 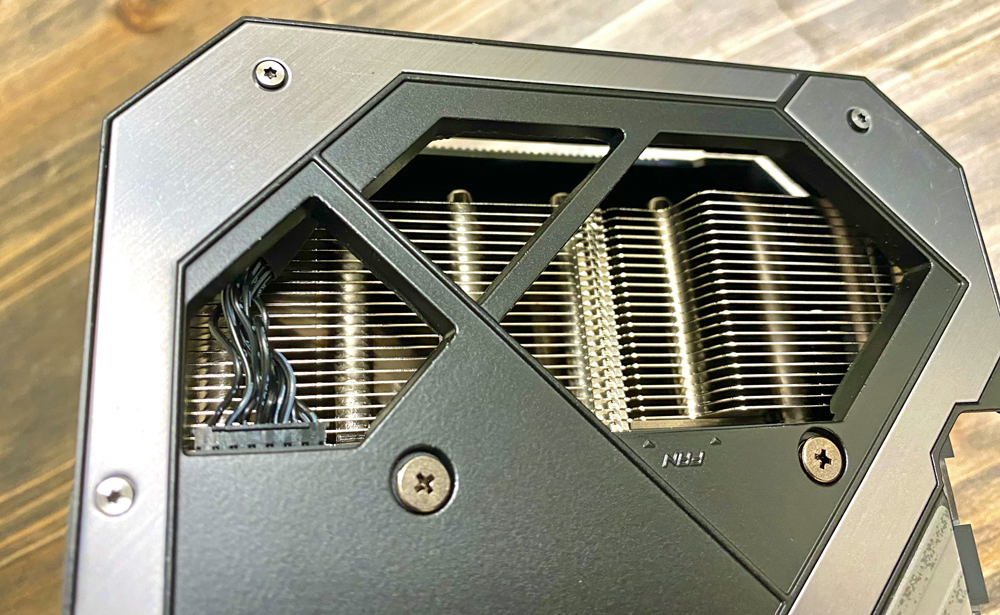 How hybrid-liquid cooling works is pretty simple. A water block on the GPU and GDDR6X memory uses the liquid coolant to pass through 600mm of hoses to a 240m radiator. The radiator can be mounted in different parts of a rig to let the heat dissipate. On top of the liquid-cooling unit are a pair of 120m fans to keep the air moving. The air-cooled we are looking at isn’t quite as cool. It has three fans on top of the heatsink that run to keep heat controlled, yet don’t make a huge amount of noise. 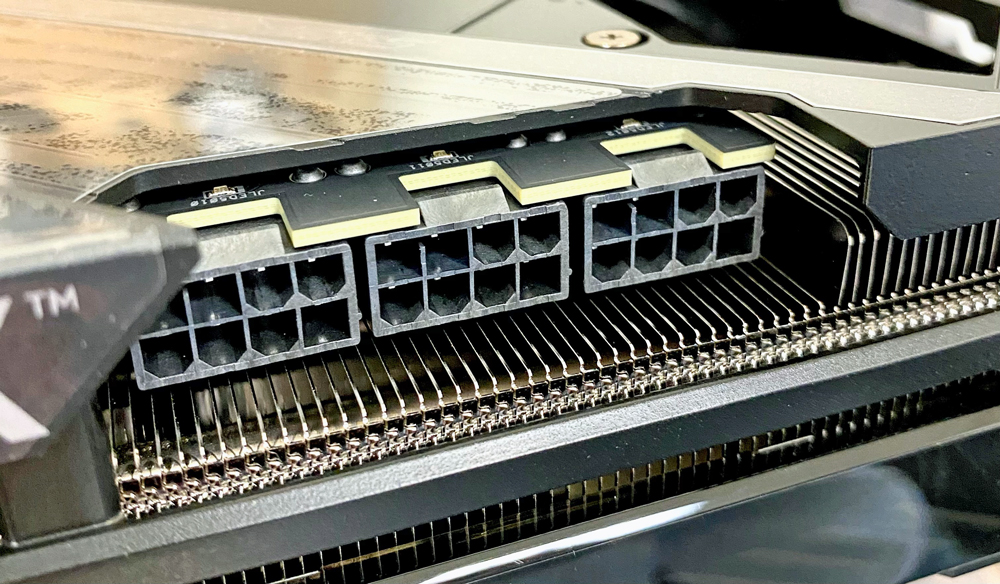 From a power-needs standpoint, the ASUS ROG Strix RTX 3080 Ti uses three 8-pin power connections, which is one additional than even the NVIDIA RTX A6000 we just reviewed needed. 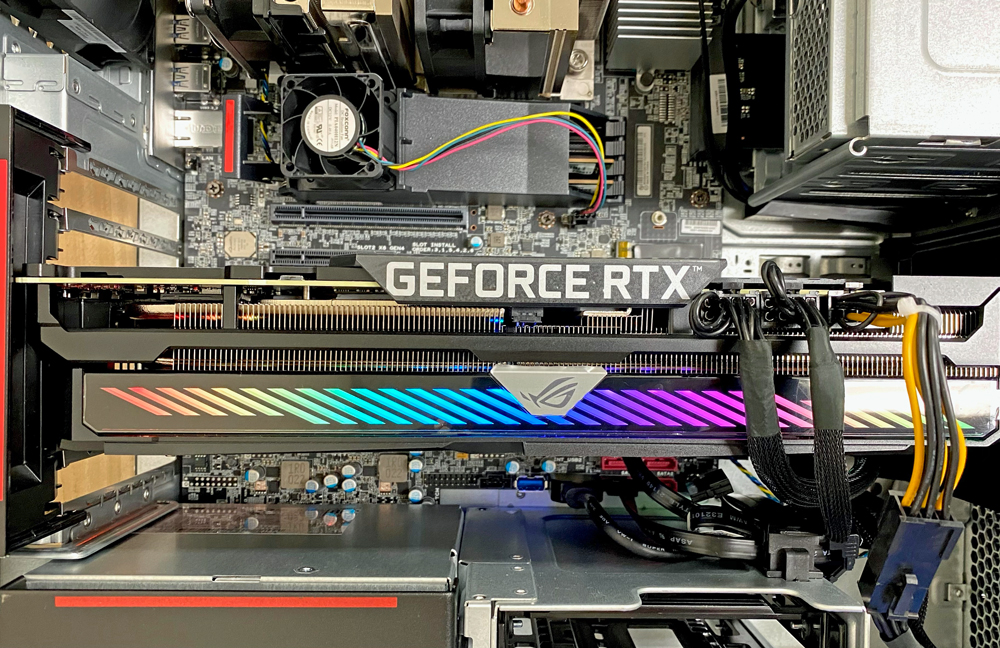 We installed the RTX 8000 and RTX 3090 in a custom consumer-build for our Blender and LuxMark tests:

Here the RTX 3080 Ti showed improvements over the RTX 8000 in several viewsets though it had very poor performance in Snx. Unsurprisingly the A6000 was the top performer here.

Here the RTX 3080 Ti was quite surprising as it took the top spot in three categories and tied the A6000 in FSI. The 3080 Ti outshined the RTX 8000 in just about every category.

Next up is the ubiquitous Blender, an open-source 3D modeling application. This benchmark was run using the Blender Benchmark utility. NVIDIA OptiX was the chosen render method, as opposed to CUDA, as the 3080 Ti and its comparables can utilize RTX. In this benchmark measured in seconds, lower is better.

Here the RTX 3080 Ti performed better than all but the RTX 3090 FE in three tests, and in BMW and Classroom, it took the top spot. In this benchmark, it is important to note that lower is better. 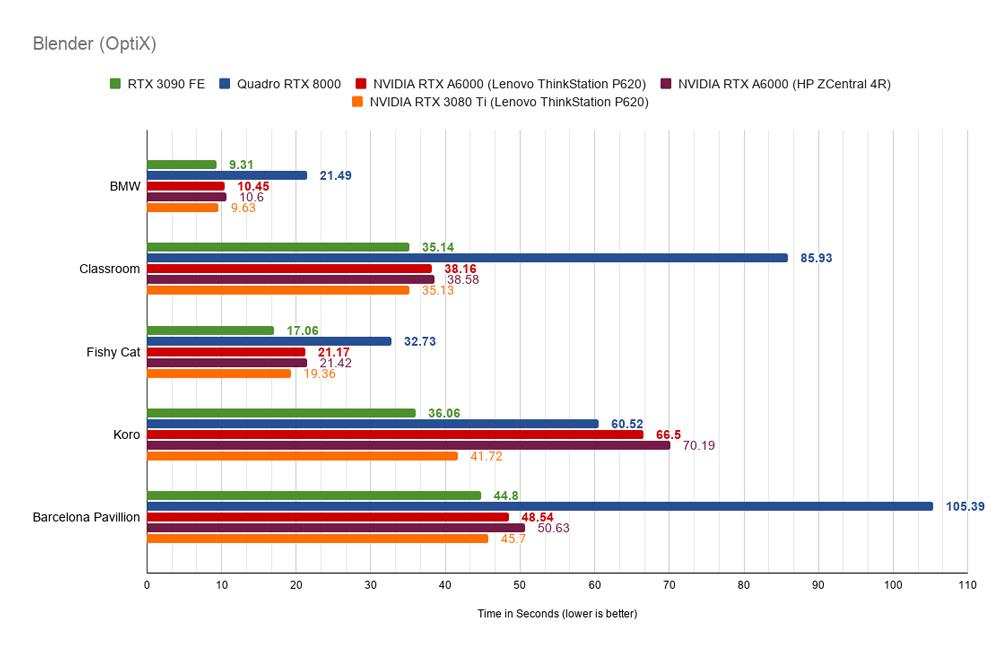 For the food rendering category, the 3080 Ti scored 7,864 putting it third overall. In the Hallbench the new card hit 21,378 taking the second spot. 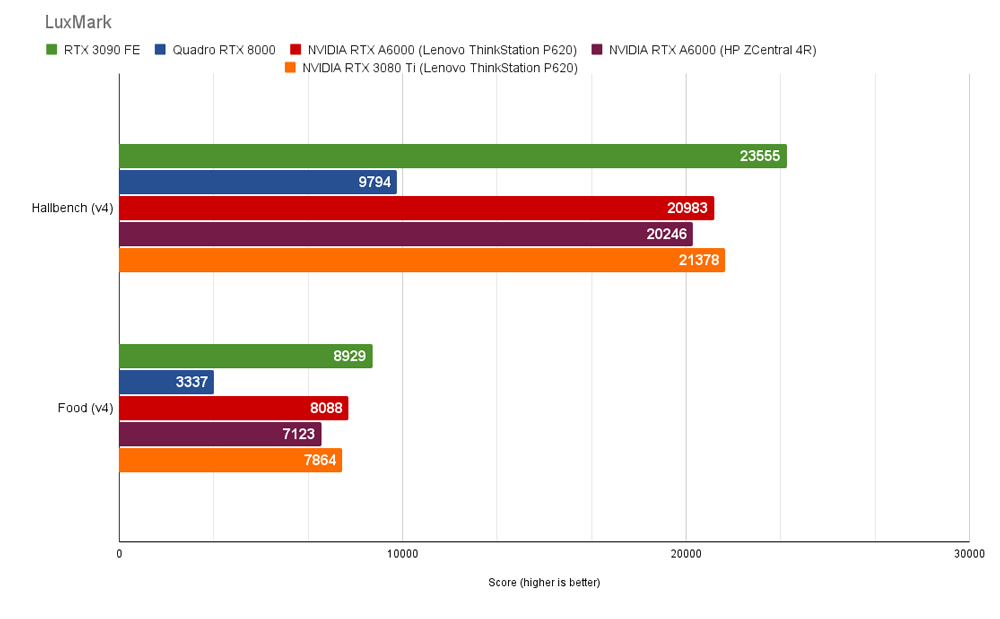 Here we see the NVIDIA GeForce RTX 3080 Ti get an overall score of 691.13 in the Lenovo ThinkStation P620. This is actually the highest total score we’ve seen to date.

Last week, NVIDIA expanded its Ampere GPU line even further with the introduction of the NVIDIA GeForce RTX 3080 Ti, as well as the 3070 Ti. Both are aimed at gamers and maybe a little toward creative pros; in this review, we looked at RTX 3080 Ti.

The new GPU comes with slightly lower boost and base clock rates compared to the 3080 and 3090. However, the 3080 Ti has a bit higher memory and about 1,500 more CUDA cores than the 3080. On the flip side, it has about half the memory of the 3090. The particular GPU we looked at here is the ASUS ROG Strix GeForce RTX 3080 Ti. The one reviewed is the air-cooled version, but speaking of cool, there is a hybrid liquid-cooled card using both liquid and air cooling available as well. 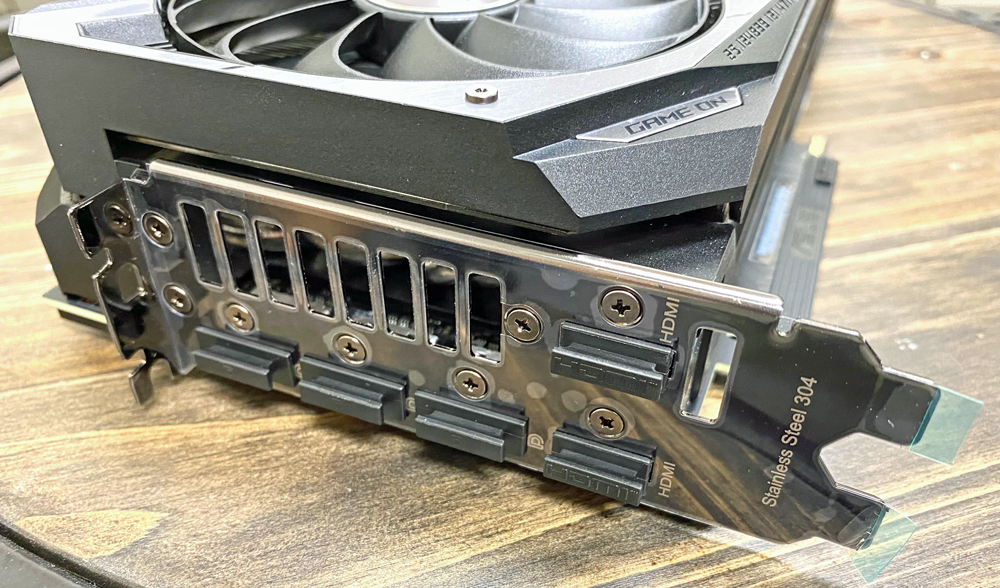 To get an overall idea of where the new card sits in the grand scheme of NVIDIA we ran it against the RTX 8000 and the newer high-end A6000. Not an apple-to-apple or use-case-to-use case, but it does give one a good idea of how well the card performs. We ran the card through our graphics-intensive benchmarks including SPECviewperf 2020, SPECworkstation3, Esri ArcGIS, Blender, LuxMark, and OctaneBench.

In SPECviewperf 2020 the 3080 Ti did better than the 8000 but not as good as the A6000. This came as no surprise as the 3080 Ti has Ampere architecture, like the RTX A6000, this gives it a modest bump against the older technology but it still lands under the higher-end GPU. In SPECworkstatoin3 we saw the 3080 Ti outperform and tie the A6000 in several tests and it did better than the RTX 8000 across the board. With Esri, the 3080 Ti came in second in Montreal but last in both Philly and Portland.

In Blender and LuxMark we were able to compare the RTX 3080 Ti to even more GPUs. For the five sets tested for Blender, the 3080 Ti was able to beat out all but the FE 3090. In LuxMark the RTX 3080 Ti took second in Hallbench and third in Food. Finally, for OctaneBench, the RTX 3080 Ti reported the highest score to date.

So, assuming you can find one, should you buy it? That largely depends on its intended use and what you currently have. For gamers, it’s a fantastic card for sure. Our concern leans a little more creative pro though. The NVIDIA GeForce RTX 3080 Ti will definitely let those who want to work with the card and dabble in gaming do both quite well.