Last year, Seagate announced an expansion to its enterprise SAS SSDs with the inclusion of the 3032 SAS SSD line. The line uses the SAS interface for 12Gb/s, dual-port 24×7 performance. The drives are 2.5” x 15mm and run in capacities from 400GB to 15.36TB. The series is further broken down into three endurance levels including mixed workloads (3532), write-intensive (3732), and scaled endurance with the drive we are looking at today, the Seagate Nytro 3332 SAS SSD.

Last year, Seagate announced an expansion to its enterprise SAS SSDs with the inclusion of the 3032 SAS SSD line. The line uses the SAS interface for 12Gb/s, dual-port 24×7 performance. The drives are 2.5” x 15mm and run in capacities from 400GB to 15.36TB. The series is further broken down into three endurance levels including mixed workloads (3532), write-intensive (3732), and scaled endurance with the drive we are looking at today, the Seagate Nytro 3332 SAS SSD. 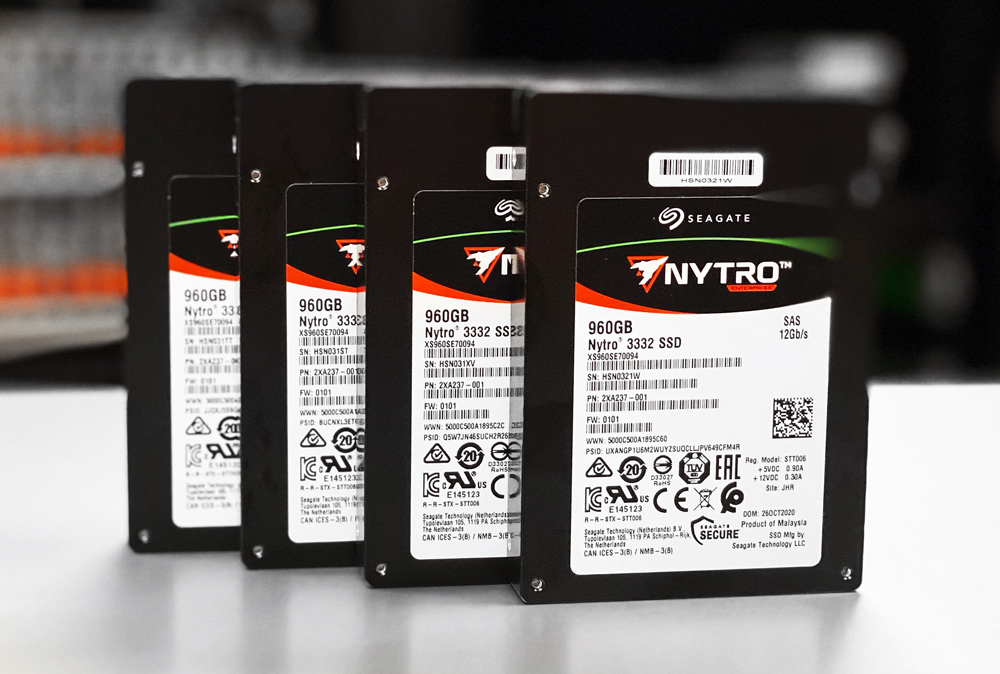 SAS is losing some steam among the major interfaces in the data center but still has a strong place in the data center. As SAS is dual-ported,  these drives have historically been used along with active-active controllers. SAS tends to run higher capacity than SATA as well due to its higher power ceiling, compared to SATA, allowing for higher speeds as well as NAND capacities. Being that there are millions of SAS slots out there and NVMe hasn’t completely pushed the technology away, Seagate is more than happy to supply the drives for the need. 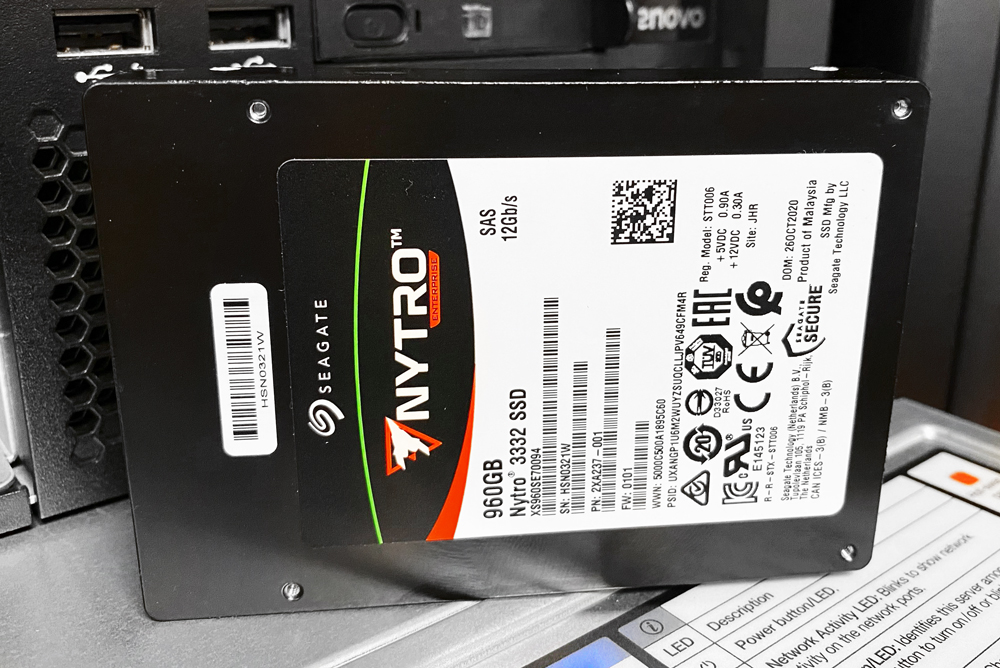 Being part of the company’s 3032 line, the Seagate Nytro 3332 comes with all the benefits including a capacity of up to 15.36TB, performance up to 2.2GB/s, and throughput up to 240,000 IOPS. The drive comes in SED, FIPS 140-2, and instant secure erase as well. The best use cases for the 3332 are server virtualization, OLTP databases, software-defined storage, all-flash arrays, and caching and tiering.

The Seagate Nytro 3332 SAS SSD comes with a 5-year limited warranty. For this review, we are looking at the 960GB capacity. 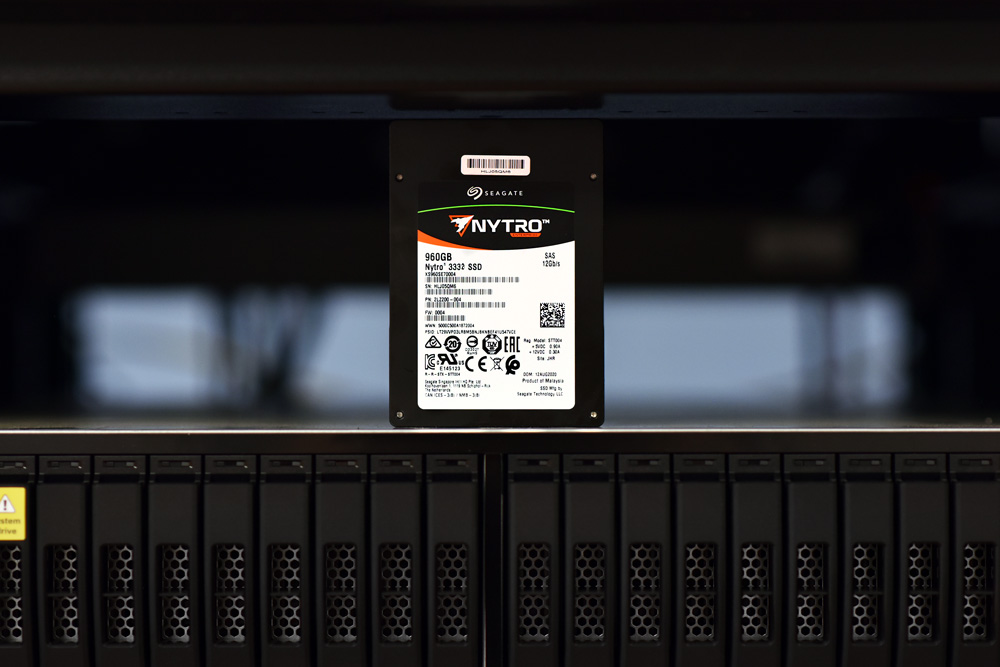 In order to understand the performance characteristics of enterprise storage devices, it is essential to model the infrastructure and the application workloads found in live production environments. Our benchmarks for the DapuStor H3100 are therefore the MySQL OLTP performance via SysBench and Microsoft SQL Server OLTP performance with a simulated TCP-C workload. For our application workloads, each drive will be running 2-4 identically configured VMs.

For our SQL Server average latency, the Seagate Nytro 3332 had an aggregate of 2ms for latency with each VM hitting 2ms as well.

Looking at our Sysbench transactional benchmark, the 3332 had an aggregate score of 10,716 TPS with individual VMs running between 2,613 TPS to 2,759 TPS.

With Sysbench average latency the 3332 had an aggregate score of 11.95ms with individual VMs running between 11.6ms to 12.24ms.

All of these tests leverage the common vdBench workload generator, with a scripting engine to automate and capture results over a large compute testing cluster. This allows us to repeat the same workloads across a wide range of storage devices, including flash arrays and individual storage devices. Our testing process for these benchmarks fills the entire drive surface with data, then partitions a drive section equal to 25% of the drive capacity to simulate how the drive might respond to application workloads. This is different than full entropy tests which use 100% of the drive and take them into a steady state. As a result, these figures will reflect higher-sustained write speeds.

In our first VDBench Workload Analysis, Random 4K Read, the Seagate Nytro 3332 peak at second with 164,538 IOPS and 776µs for latency.

Next, we switched over to our VDI clone test, Full and Linked. For VDI Full Clone (FC) Boot, the Seagate Nytro 3332 took second place with a peak of 57,135 IOPS and a latency of 564µs before dropping off slightly.

The Seagate Nytro 3332 is part of the company’s 3032 SAS SSD enterprise line. The 3332 is one of the three types of drives in the 3032 line that are categorized by endurance with the 3332 in the scale endurance tier. The drive comes in 960GB (that we looked at here) up to 15.36TB in capacity for the 3332 models. The SSD leverages the SAS 12Gb/s interface up to quoted speeds of 2.2GB/s and 240K IOPS (though the 960GB version of the 3332 has a top quoted performance of 1.1GB/s and 170K IOPS). Seagate further offers the drives in various security options including SED, FIPS 140-2, and ISE. The drive is ideal for server virtualization, OLTP databases, software-defined storage, dual controller all-flash arrays, and caching and tiering. 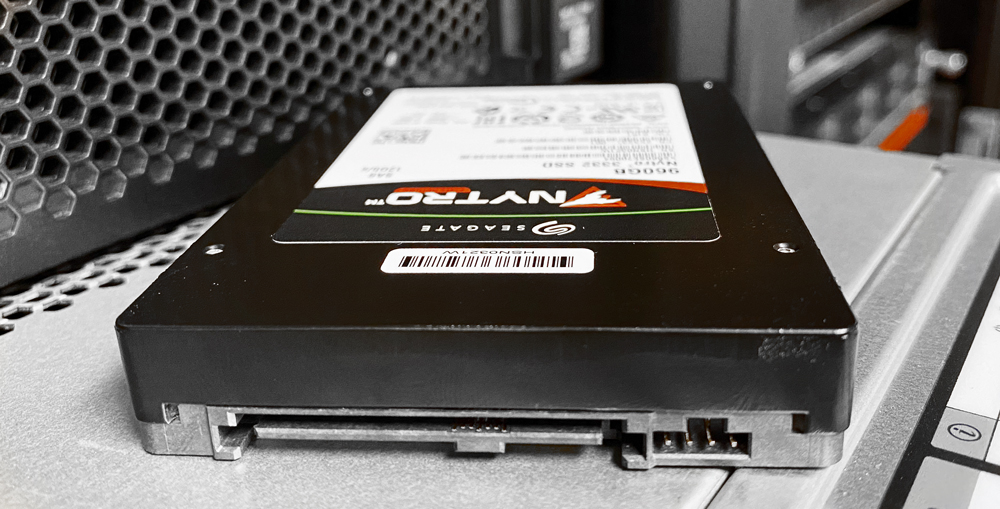 The Seagate Nytro 3332 is an SSD that is great for those that still need to leverage SAS in their data center. It provides high capacity and good performance from a trusted brand and comes in high-capacity offerings topping out in excess of 15TB per drive.