Dubbed the first 128-layer (or 4D) NAND flash-based consumer SSD, the SK hynix Gold P31 is the company’s first consumer-grade PCIe SSD to hit the US market under the SK hynix name. It features capacities of 500GB and 1TB and is targeted towards gamers, designers, and content creators.

Dubbed the first 128-layer (or 4D) NAND flash-based consumer SSD, the SK hynix Gold P31 is the company’s first consumer-grade PCIe SSD to hit the US market under the SK hynix name. It features capacities of 500GB and 1TB and is targeted towards gamers, designers, and content creators. 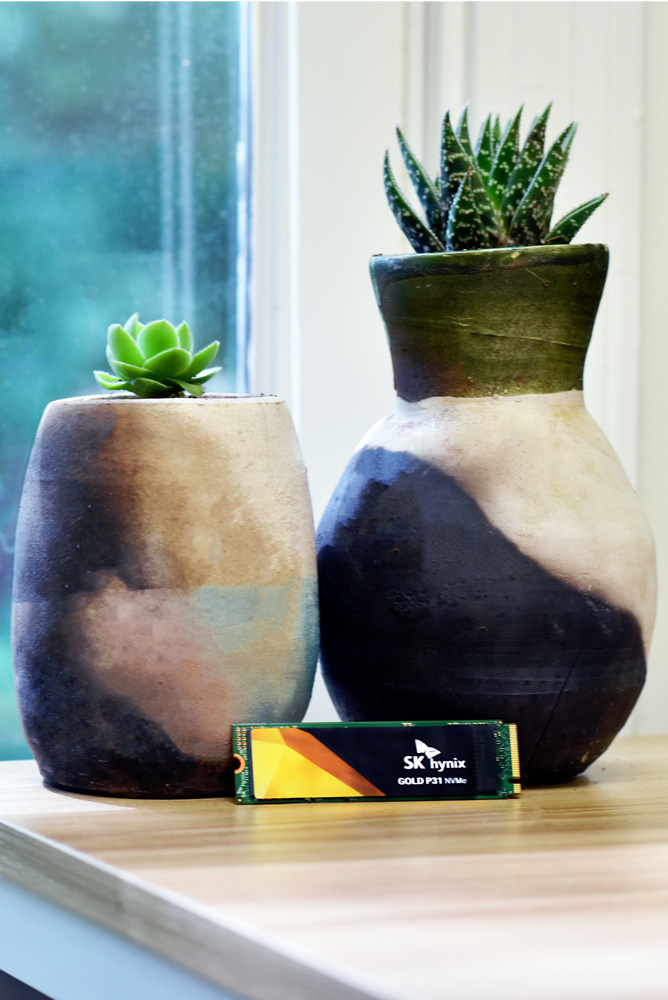 The Gold P31 is released alongside the Platinum line (though not to be confused with the previously launched Gold S31 SATA drive). SK hynix indicates that “Platinum” and “Gold” represent two different product segments within their line of consumer SSDs, where Platinum is the company’s flagship model, Gold is the more for mainstream users.

Performance-wise, the Gold P31 is quoted to deliver up to 3.5GB/s sequential read and up to 3.2GB/s sequential write, while random performance expected to hit up to 570,000 IOPS read and 600,000 IOPS write (for both capacities) They’re able to reach these speeds due to HYPERWRITE technology, in which the company claims will accelerate sequential write speeds using SLC buffer. From endurance, the Platinum P31 offers up to 1,500 TBW with a mean time between failures (MTBF) reaching 1.5 million hours. 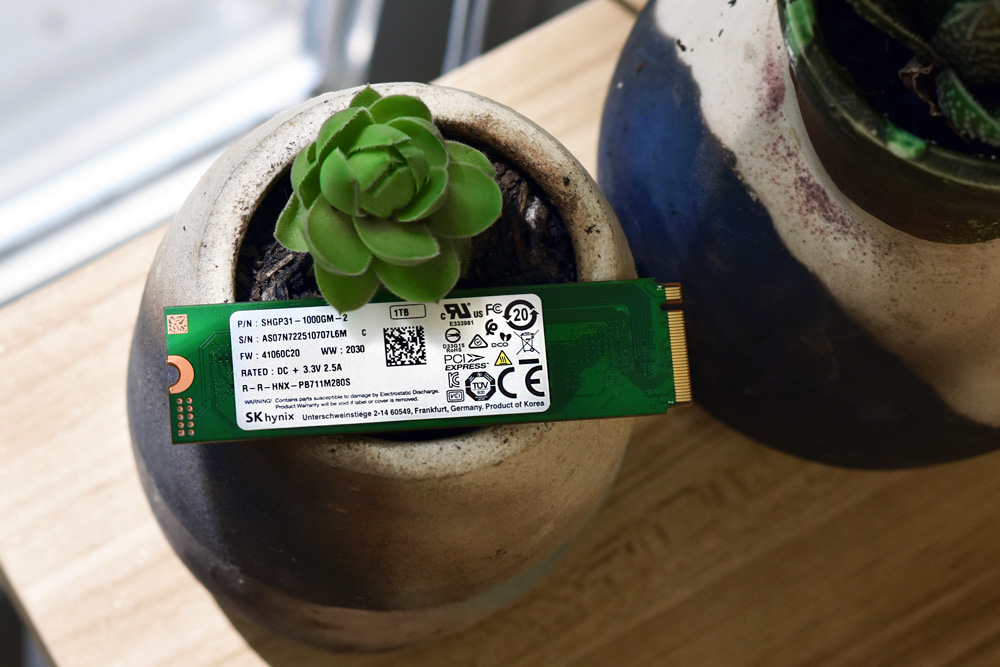 The test platform leveraged in these tests is a Dell PowerEdge R740xd server. We measure SATA performance through a Dell H730P RAID card inside this server, although we set the card in HBA mode only to disable the impact of the RAID card cache. NVMe is tested natively through an M.2 to PCIe adapter card. The methodology used better reflects the end-user workflow with the consistency, scalability, and flexibility testing within virtualized server offers. A large focus is put on drive latency across the entire load range of the drive, not just at the smallest QD1 (Queue-Depth 1) levels. We do this because many of the common consumer benchmarks don’t adequately capture end-user workload profiles.

For our SQL Server transactional benchmark, the SK hynix Gold P31 posted 3,160.8 TPS, which placed it among the leaders. 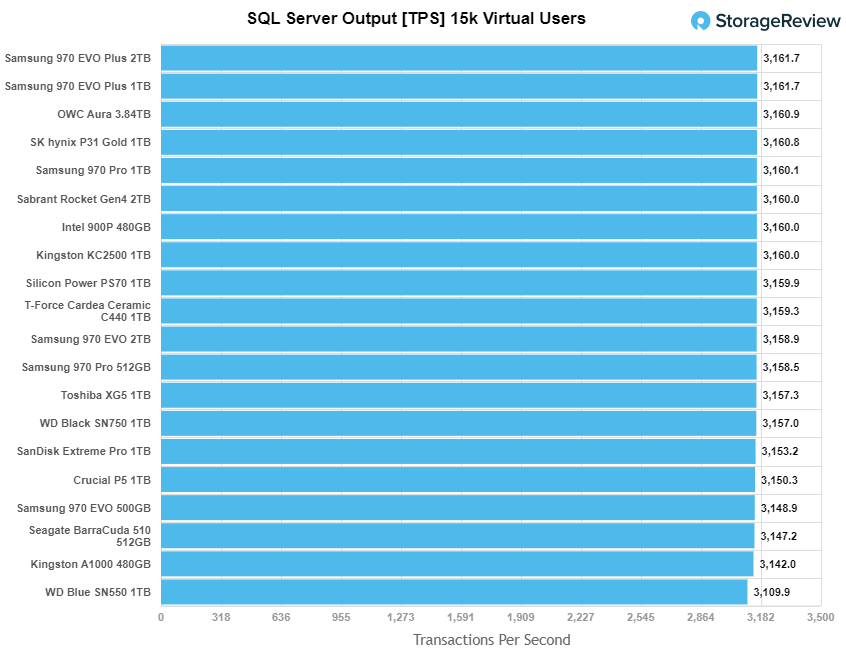 For latency, the SSK hynix Gold P31 had top-end leaderboard performance with 3.0ms, which is right there up with the leaders and tied with the premium Samsung 970 Pro. 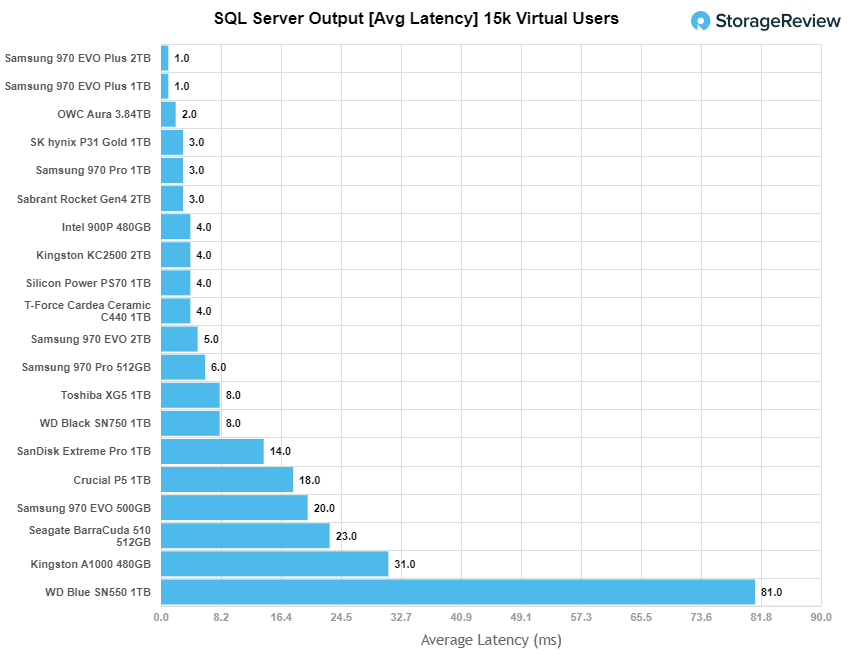 Here, we see the SK hynix Gold P31 with a very impressive score of 2,301.6 seconds, which is the fastest of any non Optane SSD we’ve tested (and noticeably better than the Samsung Pro). 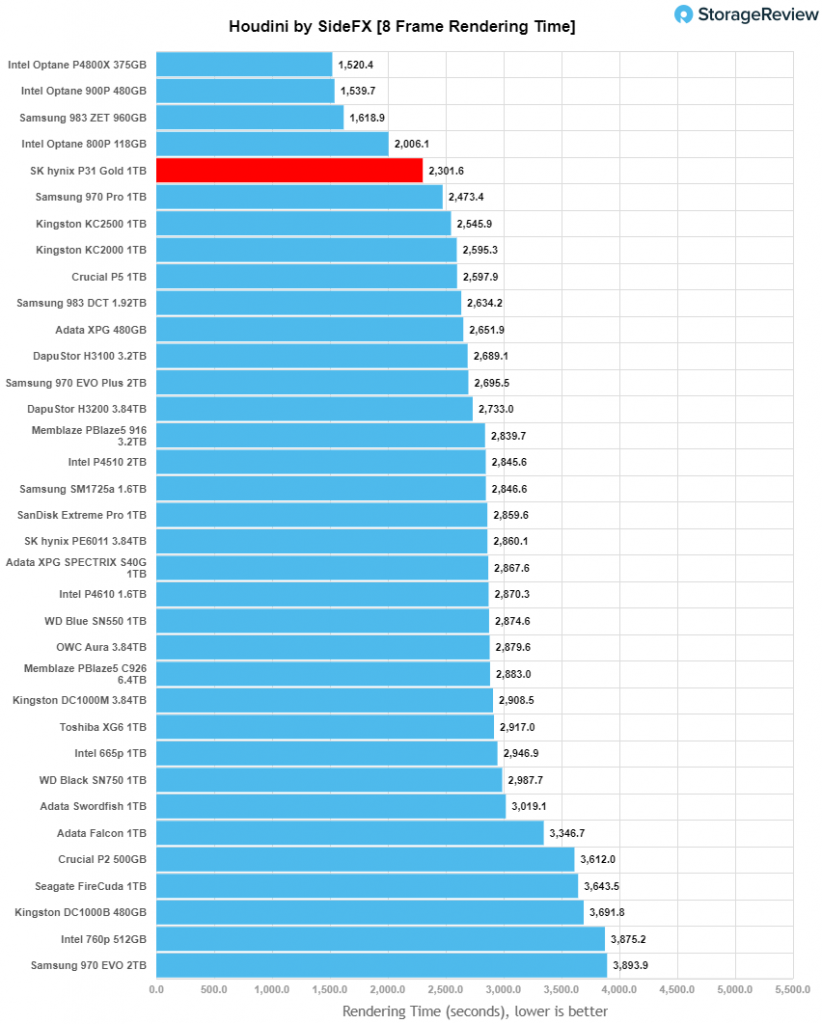 It fell back again in write performance, however. It peaked at around 20k IOPS (or 1.27GB/s) with a latency of 781ms before falling off slightly at the very end of the test.

Next, we looked at our VDI benchmarks, which are designed to tax the drives even further. Here, the new SK hynix showed mid-to-upper range performance compared to the other tested drives. In Boot, the Gold P31 showed a peak of around 77,865 IOPS with a latency of 430.2µs before it dropped slightly at the very end.

Looking at our VDI Initial Login, the SK hynix Gold P31 showed a peak of 48,813 IOPS with a latency of 610.5µs, which was good enough for 2nd place (though still well behind the Samsung 970 Pro).

Finally, in our last test, VDI Monday Login showed the SK hynix Gold P31 SSD with a peak IOPS at 38,105 IOPS with 417.7ms in latency, just behind the WD Black.

Not only is the SK hynix Gold P31 the company’s first consumer-grade SSD to hit the US market, but it’s also the first non-enterprise drive to feature 128-layer NAND. Nonetheless, the SK hynix is catered towards a range of different demographics, including gamers, designers, and content creators. And based on its impressive performance, it will certainly excel in each area. Available in capacities of 500GB and 1TB, the SK hynix also features HYPERWRITE technology, offers up to 1,500 TBW, and time between failures (MTBF) is quoted to reach 1.5 million hours.

For performance, we compared the SK hynix Gold P31 to a range of similarly-classed client NVMe drive where it showed some great results. For example, it hit a pretty impressive milestone in our Houdini test results with a bar-setting 2,301.6, posting the best results we’ve seen for a non-Optane SSD. That’s quite the feat. SQL performance was also very good, placing it at the top of the leader board in both TPS and latency. Moving on to our 4K and sequential tests, the Gold P31 found itself in second place in reads with a peak performance at 497,750 IOPS and a latency of just 256.1µs. With 64K sequential performance, the SK hynix drive boasted the best performance by far, peaking at 41,005 IOPS (or 2.56GB/s) with 389.6.3µs (which was over twice the performance output of the Samsung EVO Plus). In our VDI benchmarks, the SK hynix Gold P31 slowed down a bit (though still solid), showing peaks of 77,865 IOPS in boot, 48,813 IOPS in initial login, and 38,105 IOPS in Monday login.

Though it features premium performance, its price tag certainly doesn’t reflect it. The SK hynix Gold P31 is currently priced at just $75 for the 500GB and $135 for the 1TB–well worth the cost. This is noticeably less than even the weaker-performing drives in our test, such as the Samsung EVO Plus, which goes for roughly $100 and $190 for the same capacities. With this fantastic price point and overall impressive performance, we highly recommend the SK hynix Gold P31 for those looking for an inexpensive, performance-driven consumer SSD.