Supermicro’s A+ SuperWorkstation 5014A-TT (AS-5014A-TT) is a high-end desktop workstation. It can sport up to 64 processing cores thanks to its single AMD Threadripper Pro CPU, something no single-CPU Intel workstation can do. It also supports up to four double-wide GPUs, 2TB of memory, and eight internal storage drives. For creative professionals, data scientists, and others who need peak workstation performance, the 5014A-TT offers compelling value.

Supermicro’s A+ SuperWorkstation 5014A-TT (AS-5014A-TT) is a high-end desktop workstation. It can sport up to 64 processing cores thanks to its single AMD Threadripper Pro CPU, something no single-CPU Intel workstation can do. It also supports up to four double-wide GPUs, 2TB of memory, and eight internal storage drives. For creative professionals, data scientists, and others who need peak workstation performance, the 5014A-TT offers compelling value. 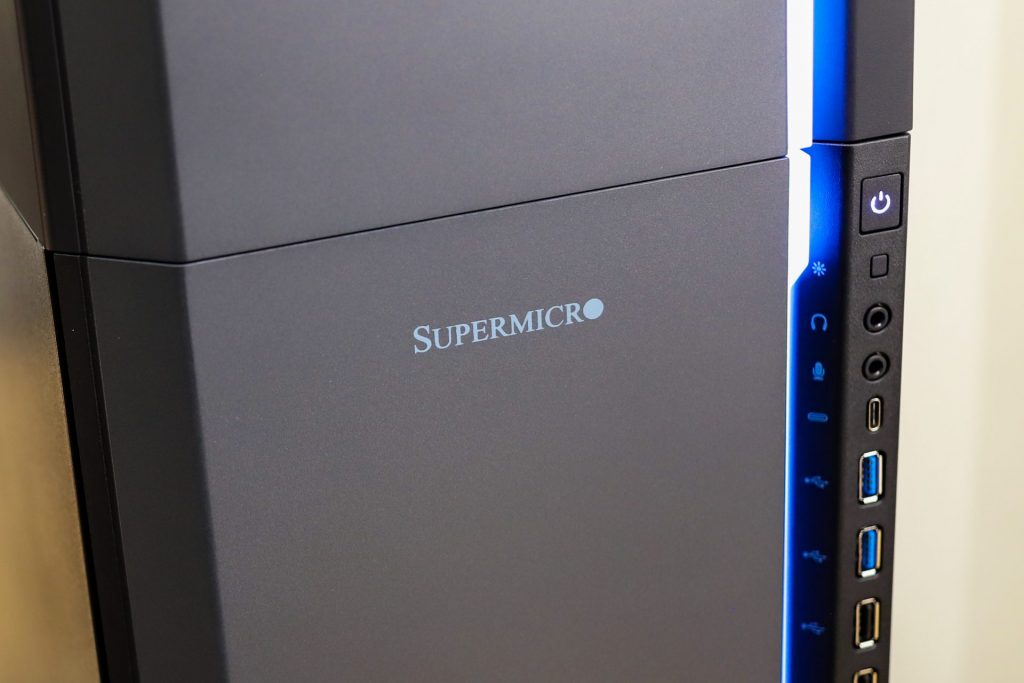 The Supermicro 5014A-TT is one of the few desktop workstations that supports AMD Threadripper Pro processors. These chips offer up to an incredible 64 cores, far more than Intel offers in its competing Xeon W-series CPUs, which max out at 38 cores (in the Xeon W-3375). Thus, you’d need a dual-CPU Intel workstation with scalable Xeon CPUs to approach the Supermicro 5014A-TT’s core count.

This workstation’s other claim to fame is support for four double-wide GPUs, which it backs up with a 2000-watt power supply. It also supports up to 2TB of 8-channel ECC RAM and has 128 PCI Express lanes, impressive stats for a single-CPU workstation. Its motherboard is based on the AMD WRX80 chipset. Storage expansion includes four M.2 PCIe Gen 4 x4 slots, and four 3.5-inch internal and two 2.5-inch external SATA bays.

Competition is scarce if you’re looking solely at AMD Threadripper Pro workstations. The mainstream option is the Lenovo ThinkStation P620. It can also be configured with the 64-core Threadripper Pro 3995WX, though tops out with 1TB of RAM, two GPUs, and has half the M.2 slots (two). That said, it’s a much smaller tower than the Supermicro 5014A-TT.

The Supermicro 5014A-TT is large as you would expect an ATX Full tower to be, measuring 21.06 x 8.74 x 22.56 inches (HWD). Its all-steel, all-black case is massive and very heavy. Supermicro spruced up the design with an LED light strip and a tempered glass panel for interior views, both unusual touches on a professional PC but far from unwelcome. They help this very expensive workstation look the part. 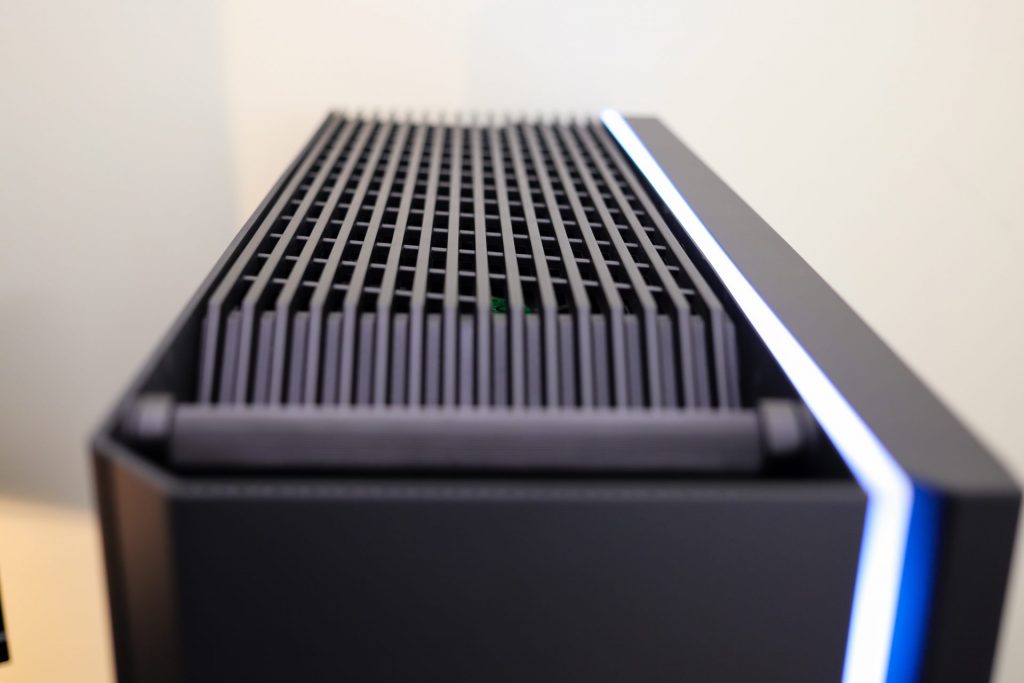 It’s quickly apparent that this workstation is all business inside. Behind the front panel are twin 120mm fans, smartly covered by a removable and washable dust filter. 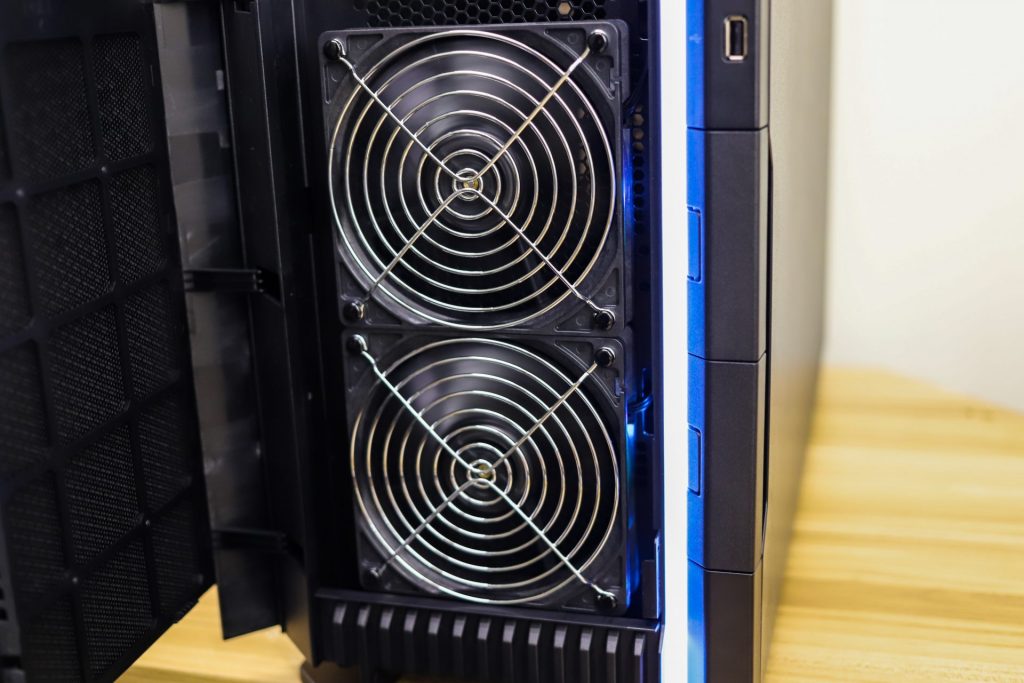 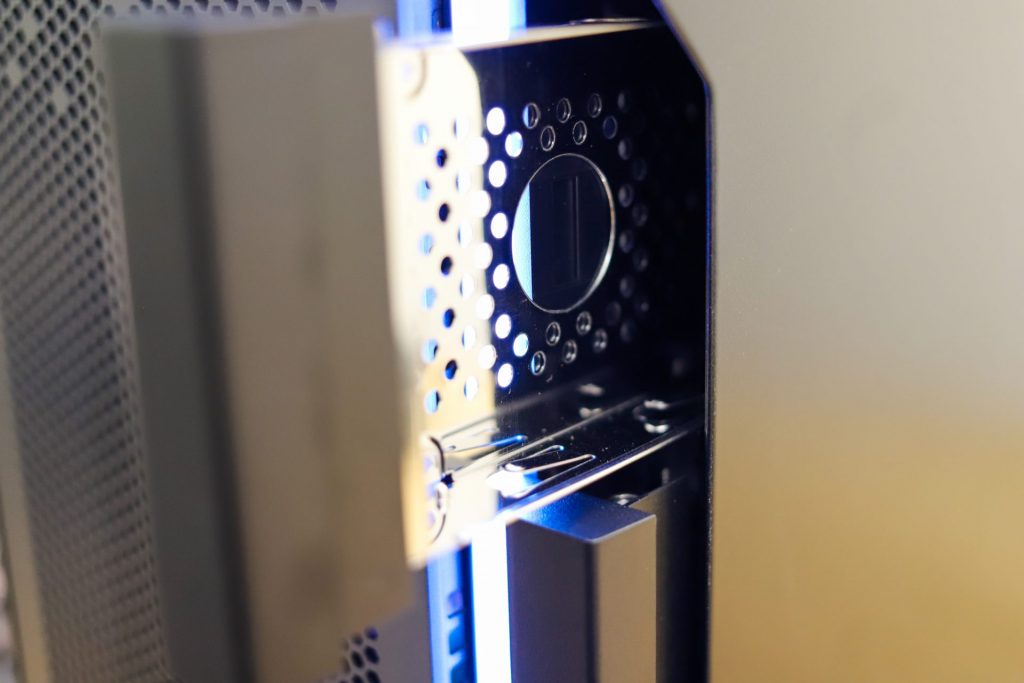 Meanwhile, rear connectivity includes Serial, VGA, a USB 3.2 Gen 2×2 Type-C port, seven USB Type-A ports (three 3.2 Gen 1 and four 3.2 Gen 2), and numerous audio jacks including S/PDIF. There are two Ethernet jacks, one 10G (with a Marvel AQC113C controller) and the other 1GbE (with an Intel i210AT controller, shared with IPMI). VGA on this platform is a bit of a strange one, which the VGA output had the priority on first boot. It’s included more for management purposes, similar to VGA on a datacenter server. 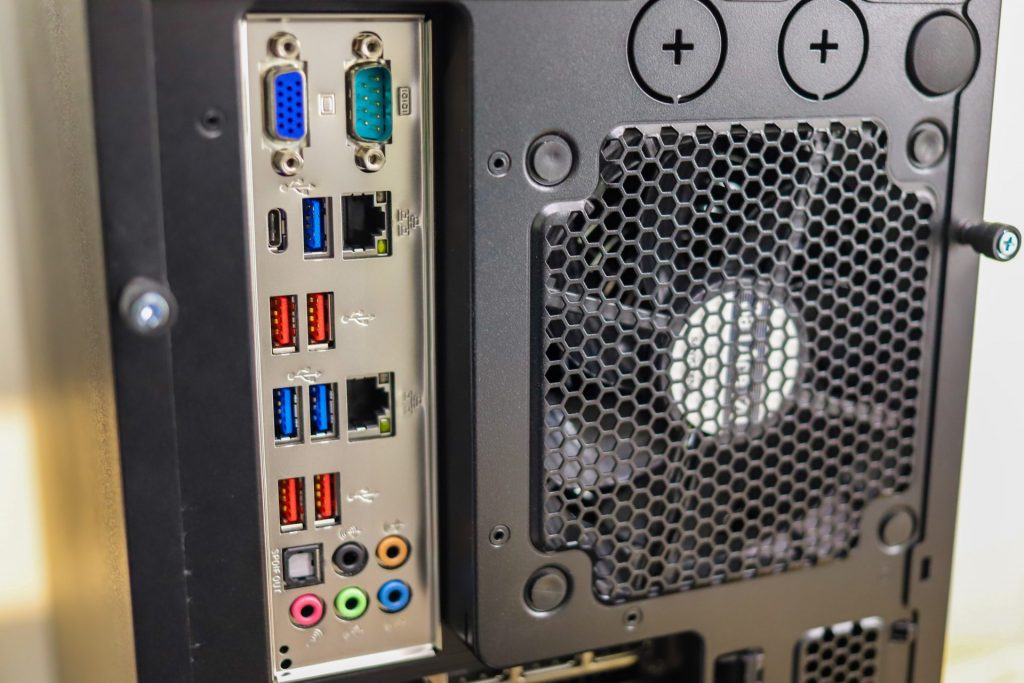 Not much is visible inside the tower until you remove the airflow guides. 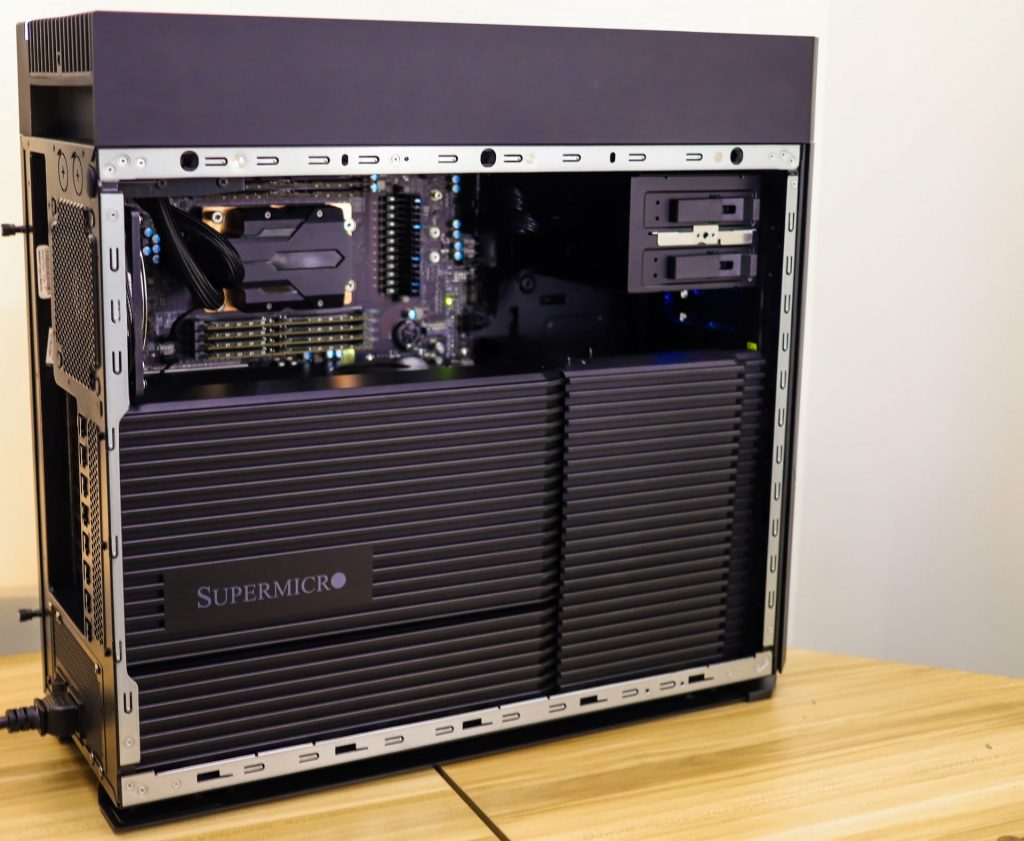 The E-ATX motherboard (12 by 13 inches) is Supermicro model M12SWA-TF based on the AMD WRX80 chipset. Eight DDR4-3200 DIMM slots flank the Threadripper Pro CPU. Our review unit has the optional water-cooling kit; its top-mounted radiator is cooled by two 120mm fans. 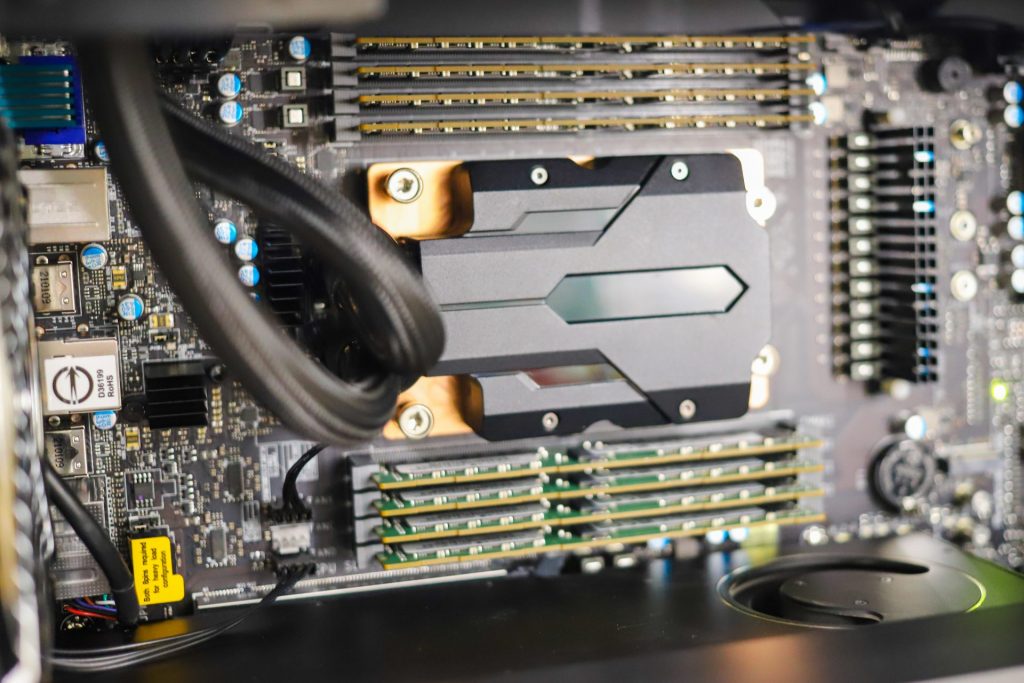 A rear 120mm provides additional exhaust. The two 5.25-inch bays in our review unit are unoccupied. Just below the CPU are six PCIe 4.0 x16 slots. We’re testing the SuperWorkstation 5014A-TT with a single NVIDIA RTX A6000 GPU, a two-slot, air-cooled card. 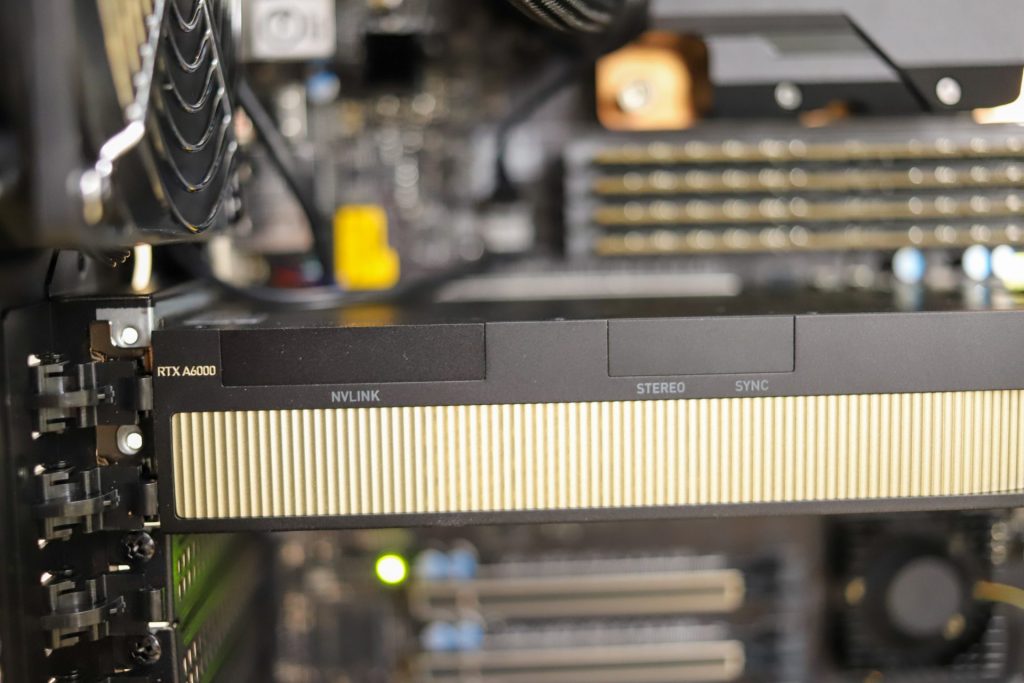 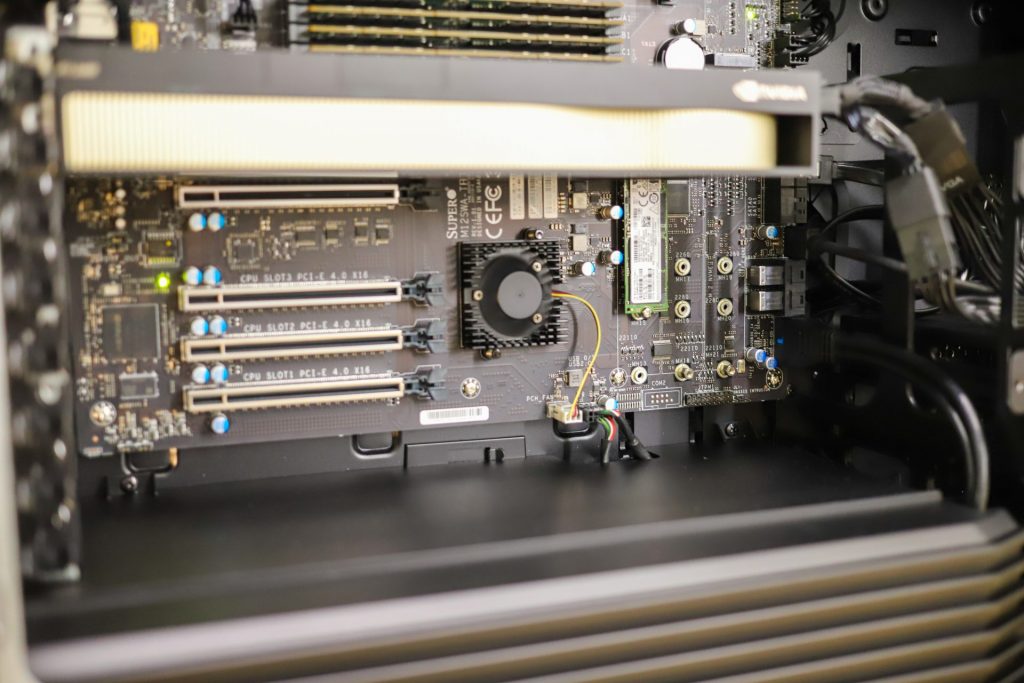 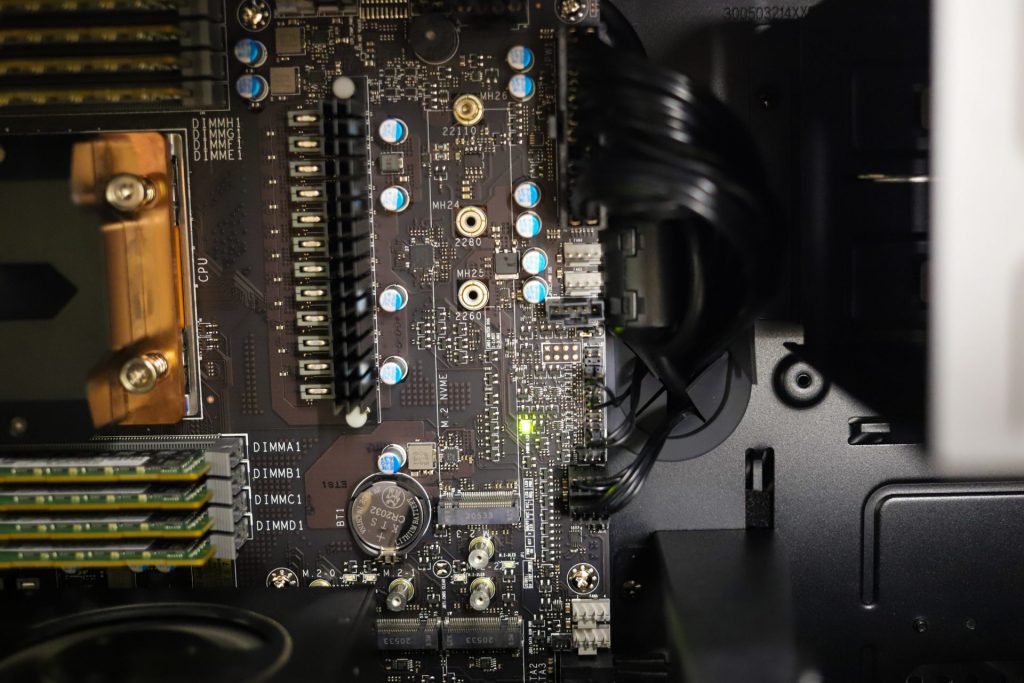 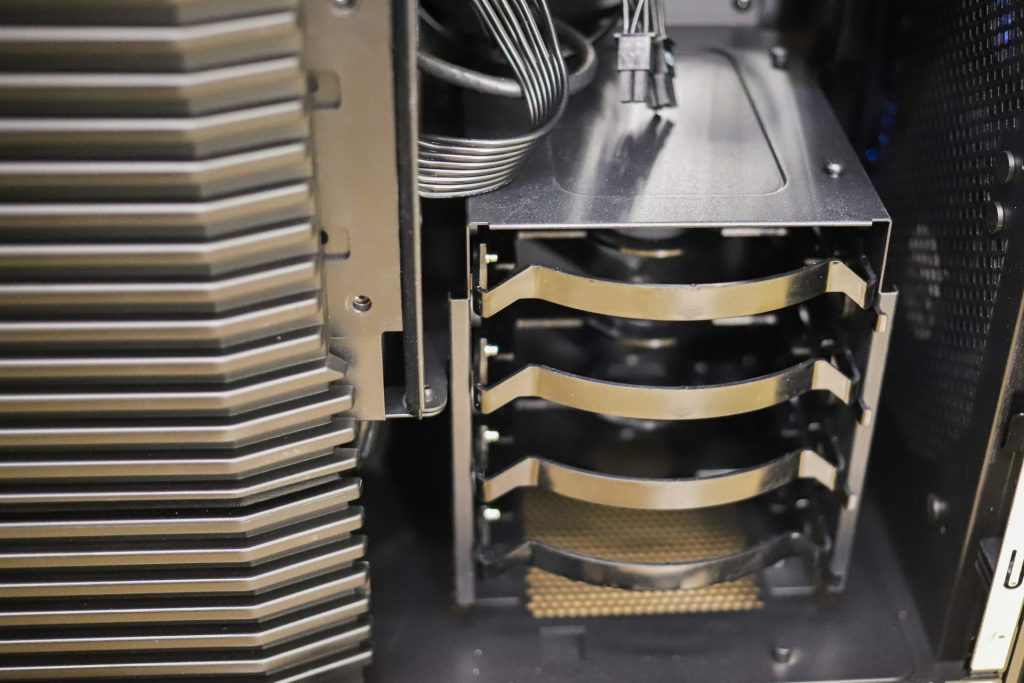 The power supply resides in its own compartment at the lower left. Overall, the 5014A-TT offers ample expansion, and working inside it is easy.

The SuperWorkstation 5014A-TT integrates with Supermicro’s BMC (IPMI) software management. It provides diagnostics, firmware update capabilities, and remote control. This is pretty unique compared to other workstation models that don’t include out-of-band management capabilities. For users who might operate this as a headless server or even a remote workstation, this is useful to handle OS installation or power cycling the system if something crashes. 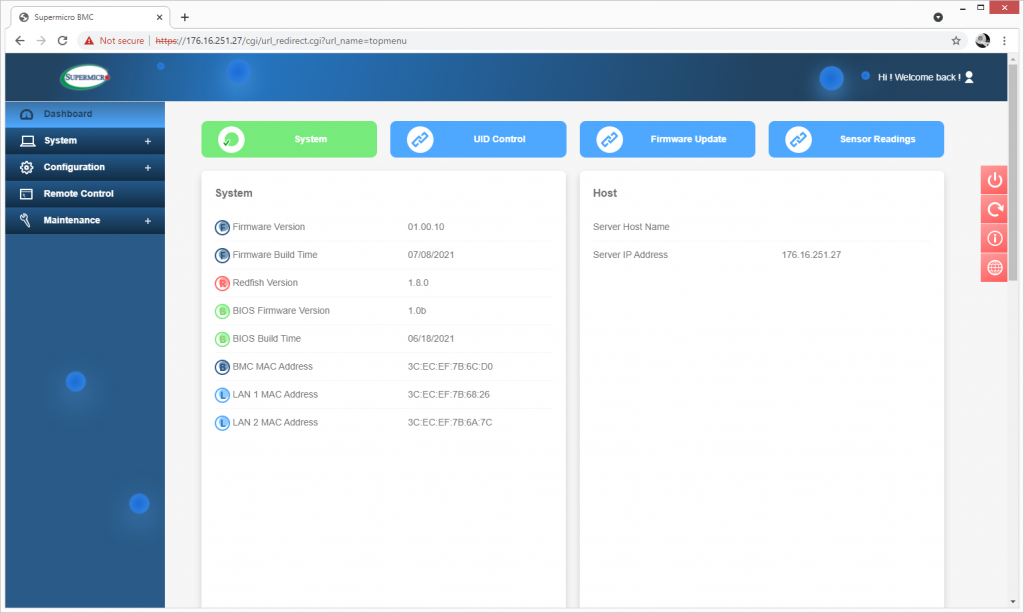 Users can see system status across installed hardware and quickly handle maintenance tasks without needing to be physically at the system. 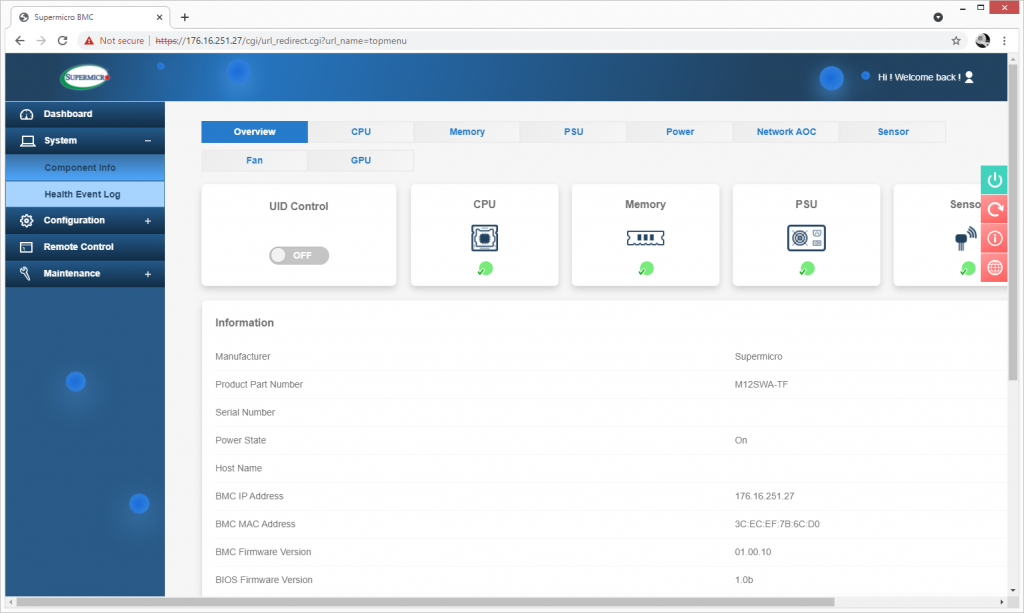 The Supermicro 5014A-TT we’re testing is equipped as follows:

This is a high-end set up with the fastest CPU, though it doesn’t go crazy with memory or storage and uses just one (albeit extremely potent) GPU. The SuperWorkstation 5014A-TT is upgrade friendly, so it can expand with your needs. That said, get it with the CPU you want from the beginning – AMD Threadripper Pro CPUs are not sold aftermarket. Also, note that Supermicro only sells the 5014A-TT as a complete system (minimum one CPU and two DIMMs).

One of the 5014A-TT’s significant downsides is its extraordinarily loud cooling system when operating at full speed. Cooling can be a bit of a double-edged sword in this regard since under incredible load you need it to be able to move a large amount of air. With the platform being designed for very high-end configurations, including out-of-band management capabilities, noise may not be an issue for some buyers.

SPECviewperf 2020 is the worldwide standard for measuring graphics performance of professional applications under the OpenGL and Direct X application programming interfaces. The viewsets (or benchmarks) represent graphics content and behavior from actual applications, without having to install the applications themselves. The newest version of this benchmark went through major updates late last year, including new viewsets taken from traces of the latest versions of 3ds Max, Catia, Maya, and Solidworks applications. In addition, they added support within all viewsets for both 2K and 4K resolution displays. Our tests were run with a windowed resolution of 3800×2120.

Here, the Supermicro tower scored almost identically to the ThinkStation, indicating the Quadro A6000 is performing consistently.

Moving on with our performance benchmarks, we ran SPECworkstation3. This is a test that specializes in benchmarks designed for testing all key aspects of workstation performance; it uses over 30 workloads to test CPU, graphics, I/O, and memory bandwidth. The workloads fall into broader categories such as Media and Entertainment, Financial Services, Product Development, Energy, Life Sciences, and General Operations. We are going to list the broad-category results for each, as opposed to the individual workloads. The results are an average of all the individual workloads in each category.

The Supermicro outperformed the ThinkStation in some categories, such as ProdDev and LifeSci, but overall the two systems scored similarly as expected.

Next up is Blender, an open-source 3D modeling application. This benchmark was run using the Blender Benchmark utility. NVIDIA OptiX was the chosen render method. The score is in seconds, with lower being better. The Supermicro and the ThinkStation continued their competitive quarrel with only one discrepancy, the koro category, where the ThinkStation trailed significantly.

Another 3D benchmark we will be looking at is LuxMark, an OpenCL GPU benchmarking utility. The Supermicro and ThinkStation both performed well thanks to the Nvidia RTX A6000 graphics cards.

We test three models – Montreal, Philly, and Portland. The Supermicro trailed in most tests, though its numbers are still within the expected range for an Nvidia RTX A6000.

The Philly model is next.

The Portland animation is last.

Last, we look OctaneBench, a benchmarking utility for OctaneRender, which is another 3D renderer with RTX support that is similar to V-Ray. This time the Supermicro trailed the ThinkStation significantly, though this may be an anomaly since it has been otherwise competitive. Higher scores are better.

Supermicro’s SuperWorkstation 5014A-TT offers unrivaled performance for a single-CPU workstation with support for a 64-core AMD Threadripper Pro CPU and up to four double-wide GPUs. Other notable stats include up to 2TB of ECC memory, eight internal storage drives (including four M.2 PCIe 4.0), and easy aftermarket upgradeability. Be prepared to set aside lots of space given this tower’s size, it’s a beast. 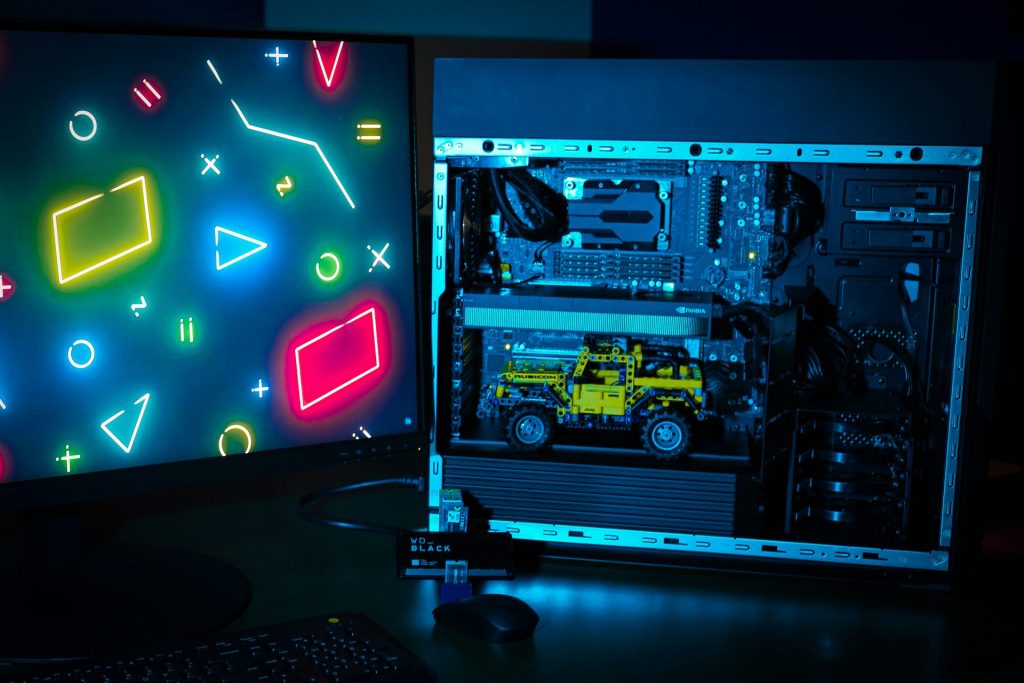 While the specs and capabilities are great, our main complaint is that for heavy use, the system is loud under high load. This is a bit of a double-edged sword, if you need massive GPU support in a desktop and you push the system hard, it’s going to get noisy. While the CPU is water-cooled, the rest of the system is not. Supermicro is pushing liquid cooling hard in their enterprise portfolio, it would be great to see more options here to reduce thermals and thus, noise. That said, especially thanks to the out-of-band management, you could stow this away in the data center where like in space, no one can hear it scream.

The Supermicro SuperWorkstation 5014A-TT is a smart pick for demanding use cases and can be more economical than a dual-CPU workstation.